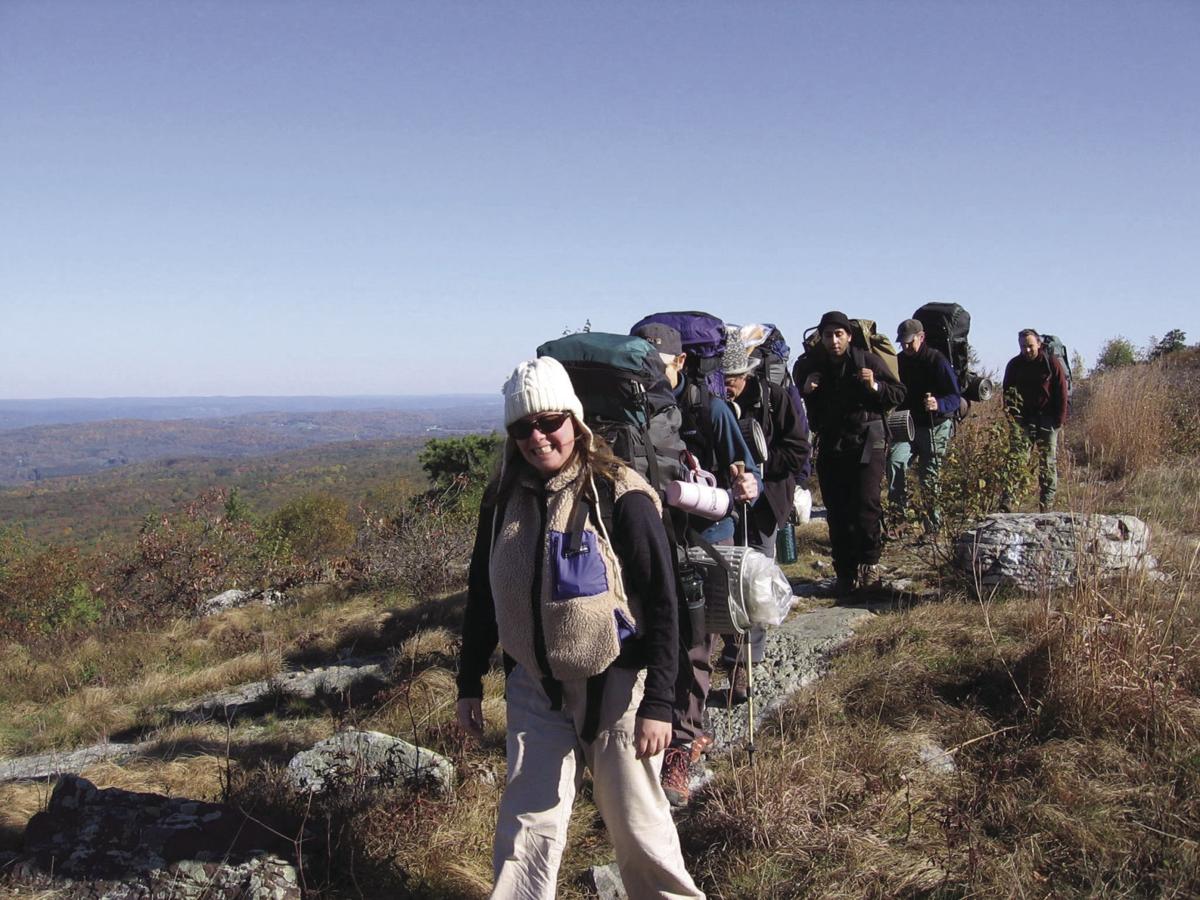 BELOW: A group of hikers along the Appalachian Trail at Delaware Water Gap National Recreation Area in New Jersey. 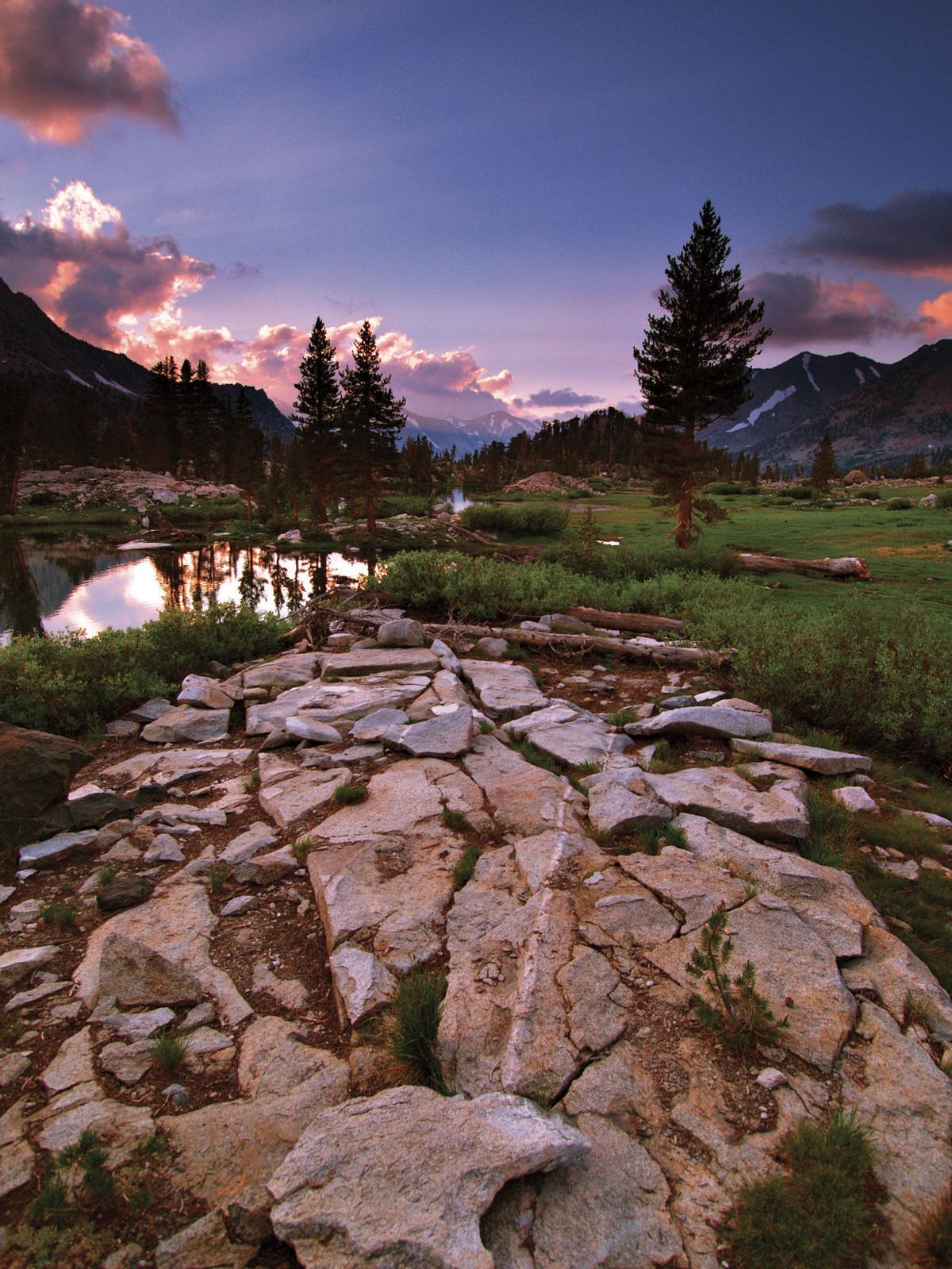 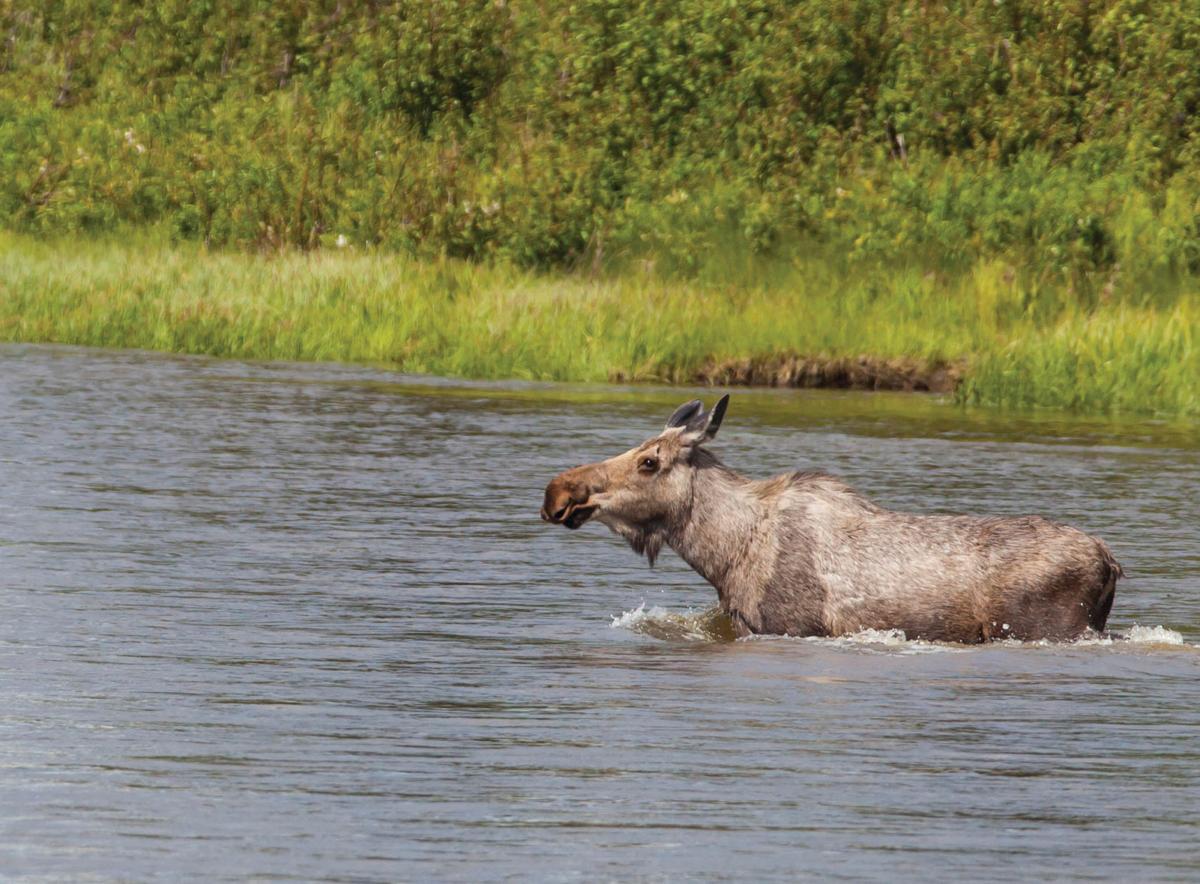 A local resident takes a dip in the Gulkana River, Alaska 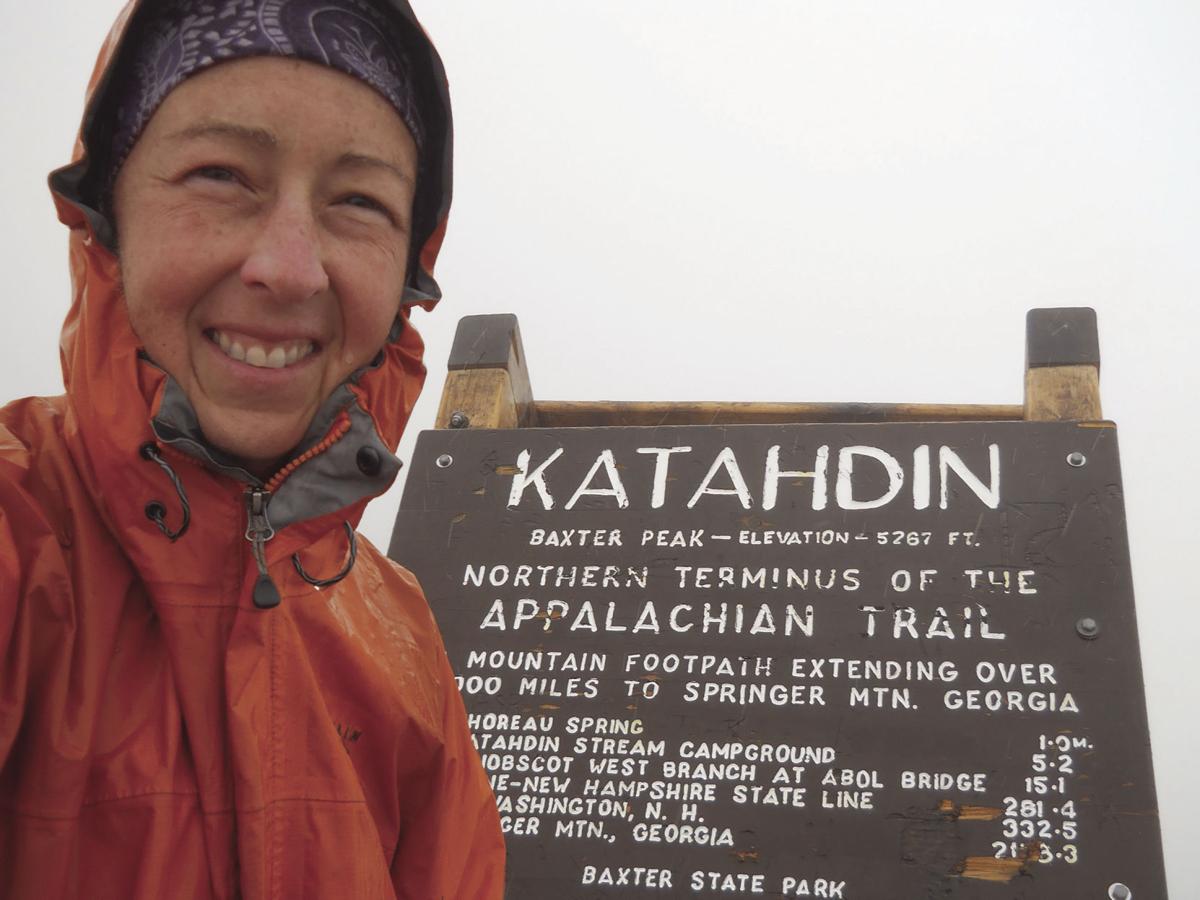 Jackie McDonnell, aka Yogi, along the Appalachian Trail.

BELOW: A group of hikers along the Appalachian Trail at Delaware Water Gap National Recreation Area in New Jersey.

A local resident takes a dip in the Gulkana River, Alaska

Jackie McDonnell, aka Yogi, along the Appalachian Trail.

He was known as “Crazy One,” but the moniker was later changed to “The Original Crazy One” when so many others began following in his footsteps.

An experienced outdoorsman from York County, Pennsylvania, World War II veteran Earl Shaffer set out on the Appalachian Trail in 1948 to “walk the Army out of my system.”

He walked right into the history books, becoming the first documented person to hike the entire Appalachian Trail, from Georgia to Maine, in one season.

Today, more than 3,000 people each year attempt to thru-hike the approximately 2,180-mile public footpath that crosses 14 states, through pasture, forest and mountain; on paths of grass, dirt or rock; through wilderness and populated areas. About one in four succeed, finishing in an average of about six months.

Those hardy long-distance hikers account for just a tiny portion of people hiking on the Appalachian National Scenic Trail, often known simply as the A.T.

Add in the rest of us, who are more apt to head out on the trail for an afternoon or a weekend, and the number soars to 2.5 million. At least, that was the estimate in a study by the National Park Service and the U.S. Forest Service in 2007.

But that was before the book and movie versions of “Wild” and “A Walk in the Woods” caused a surge of interest in long-distance hiking, so today’s number is likely much higher, said Rita Hennessy, program leader of the National Park Service’s National Trails System.

But it was the passage of the National Trails System Act 50 years ago that solidified the future of the long-distance trail by bringing it under federal jurisdiction and protection.

The 1968 act also named the first two National Scenic Trails: the A.T. and the 2,650-mile Pacific Crest Trail that runs from the border of Mexico to the border of Canada, passing through California, Oregon and Washington.

Since then, another nine National Scenic Trails have been added, along with 19 National Historic Trails. Together, these 30 trails cover 55,000 miles in 49 states (Indiana is the outlier), passing through wild, rural, suburban and urban areas.

Tally the 1,200 National Recreational Trails — which can be as short as 1 mile in length and include 21 National Water Trails — and the 2,000 Rail Trails authorized by a 1983 amendment to the act, and the National Trail Systems Act protects about 103,000 miles of trail in all 50 states, Washington, D.C., and Puerto Rico.

That’s more miles of national trail than there are miles of the Interstate Highway System, noted Robert Ratcliffe, chief of the National Park Service’s Conservation and Outdoor Recreation programs.

In the same year that the trails system was created, Congress also passed the Wild and Scenic Rivers Act, which protects some of our nation’s treasured waterways.

With individual trails having as few as one employee (the A.T. has just 10), most of the upkeep, development and services on National Scenic Trails are provided by nonprofit organizations and volunteers, Hennessy said.

One such group, the Appalachian Mountain Club, for example, has 92,000 dues-paying members, as well as other supporters who join recreational trips, outdoor activities and trail work days, according to Mark Zakutansky, director of policy engagement for the club. His primary projects are in support of the Appalachian National Scenic Trail and the New England National Scenic Trail.

The AMC also provides a hut-hiking network along the Appalachian Trail in New Hampshire’s White Mountains, the oldest network of its kind in the U.S. Spaced a day’s hike apart along the trail, the eight huts in the system are full-service with meals and bunks and are operated throughout the summer and into the fall.

Among the newest National Scenic Trails, designated in 2009, the New England Trail is composed primarily of the historic Mattabesett, Metacomet and Monadnock Trail systems. It covers 215 miles in Connecticut and Massachusetts, passing through farmland, forest and river valleys and past Colonial historic landmarks.

Travelers will want to get off the road, though, in places where these trails include segments passing through public lands. By going beyond the paved sections of the Oregon National Historic Trail and the Santa Fe National Historic Trail, for example, trailgoers will be able to see wagon wheel ruts from those long-ago journeys.

Also among the 19 historic trails is the 5,043-mile-long Trail of Tears National Historic Trail, which passes through nine states on “a journey of compassion and understanding,” according to the National Park Service website. It commemorates the survival of the Cherokee people who were forced to leave their homelands in Georgia, Alabama and Tennessee to live in Native American territory — now Oklahoma.

The Washington-Rochambeau Revolutionary Route National Historic Trail tells the story of the French who helped the U.S. win the Revolutionary War. It includes 680 miles of land and water trails from New England to the Mid-Atlantic that pass hundreds of historic sites.

“These places are part of the American story and fabric,” Ratcliffe said. Without these historic trails, he added, “It would be really hard to tell the story about the Oregon Trail or the Pony Express or El Camino Real in New Mexico and Texas. These were all pilgrimages or travel ways of some sort, and they all tell a unique story of the history of America. ... Actually traversing the landscape is a really compelling experience.”

More trails are in the works, according to Ratcliffe. A feasibility study is being done for a Chisholm and Great Western National Historic Trail that would commemorate routes followed by more than 10 million cattle between 1867 and the 1880s as they were brought north from southern Texas through Oklahoma, Kansas and Nebraska to reach rail transportation and markets in the east.

The longest of the National Scenic Trails, the North Country National Scenic Trail, is a hiking and backpacking footpath that weaves through seven states from New York to North Dakota, covering 4,600 miles. Another whopper of a trail — and a very demanding one — is the 3,100-mile Continental Divide Trail that travels along the Continental Divide from Mexico to the U.S.-Canadian border.

Take me to the river

The same day that President Lyndon Johnson signed the National Trails System Act, he also signed into law the Wild and Scenic Rivers Act, which was intended to protect against damming that would alter the nature of the country’s rivers. Under the law, rivers can be classified as wild, scenic, recreational or some combination, depending on the level of access to the river and the amount of shoreline development.

Among the waterways protected by the law are portions of the Rio Grande in Texas and New Mexico; numerous rivers in Alaska, California, Oregon and Michigan; the Little Miami and Little Beaver, both in Ohio; the Bluestone in West Virginia; Eightmile River and the West Branch of the Farmington in Connecticut; and White Clay Creek in Delaware and Pennsylvania.

Some 12,734 miles of river in 40 states are protected by the Wild and Scenic Rivers Act. While that might seem like a lot, it actually represents just about one-third of 1 percent of the 3.6 million miles of streams in the U.S., noted Joan Harn, river programs manager for the National Park Service’s Conservation and Outdoor Recreation programs.

That number could grow soon if the nonprofit river advocacy group American Rivers gets its wish. In conjunction with the 50th anniversary of the National Wild and Scenic Rivers Act, the group started a major campaign — 5,000 Miles of Wild — to push for federal designation of an additional 5,000 miles of rivers nationwide.

To help the effort, the group asked people to submit to the website americanrivers.org their stories of how our nation’s rivers have enhanced their lives.

Among the sentiments shared was that of Amy Kober of Portland, Oregon, who wrote, “Our family has spent more time on the Wild and Scenic North Umpqua [in southwestern Oregon] than any other river. I have the best memories of swimming in the river on hot summer days when I was pregnant, of walking the trail with a baby in the carrier on my chest, of my boys learning to catch crawdads and climb trees, splashing in Steamboat Creek, finding all kinds of bugs and snakes and other treasures along the riverbanks. The river is our touchstone, and we’ll keep going back as much as we can. There’s no better way to spend time as a family.”

If you’ve been counting, those six hikes total up to nearly 15,000 miles. Add in all the other hikes McDonnell has done, and she’s racked up about 20,000 miles — in increments so long, she noted, they’re actually visible on a globe.

“There’s a strip map of the Appalachian Trail that’s about 8 inches wide and 4 or 5 feet long. I remember when I was in Hot Springs, North Carolina, on my first hike on the A.T., and I had maybe gone 2 inches on this map,” McDonnell recalled. “I’m looking [at the map] like, ‘Oh, dear. I have to go that far?’ And there was another hiker, and he said, ‘You know, if you want to go to Maine, get in a plane or drive there. It’s not about getting to Maine; it’s about everything along the way.’”

You might say McDonnell, who was once a hotel executive, is now a professional hiker. She has written guidebooks on each of the Triple Crown trails and co-owns an online and brick-and-mortar hiking gear store (Triple Crown Outfitters) with her partner, Matt “Worldwide” Signor. The store — and the couple’s home — is at the 700-mile mark on the Pacific Crest Trail in Kennedy Meadows, California.

McDonnell compares the establishment of the National Trails System 50 years ago to the government’s foresight in establishing the National Park System in 1916, adding that both the parks and the trails allow us to satisfy a deep need within ourselves.

“That’s kind of what our country was built on — exploration and checking out what’s around the next bend, whether that’s across the Rockies or just around the next corner of the trail. You see kids, and they’re always running ahead to see what’s there. I think that’s something in our mind that we all still have. We just have to tap into it,” McConnell said. “Humans were meant to explore and see what’s going on around us.”

Visit the AAA Store in Charleston or call one of the AAA travel professionals at 304-925-1136.