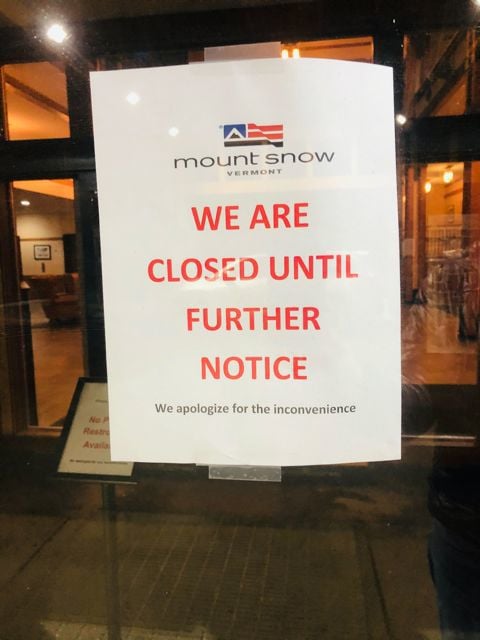 A sign at Mount Snow says the resort is closed until further notice. 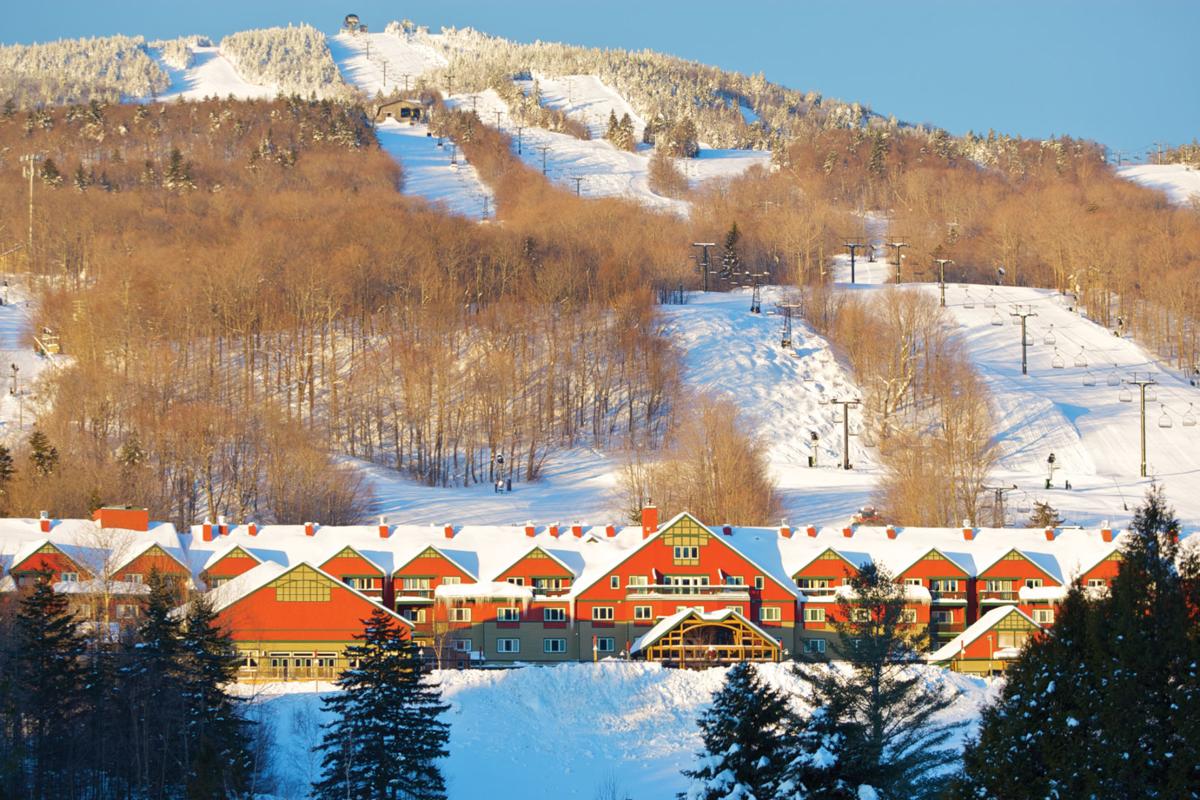 Built just over 20 years ago, the Mount Snow Grand Summit Resort was designed to mimic the grand hotels of yesteryear. Its turn-of-the-century appearance gave it an iconic look of a bygone era.

A sign at Mount Snow says the resort is closed until further notice.

Built just over 20 years ago, the Mount Snow Grand Summit Resort was designed to mimic the grand hotels of yesteryear. Its turn-of-the-century appearance gave it an iconic look of a bygone era.

As a travel writer, I’ve learned to be adaptable and flexible when traipsing around the United States and across the globe. For example, it once took me over 38 hours to get home from a trip to Southern Greenland. It reminded me of the movie “Planes, Trains and Automobiles,” except that it also involved boats, icebergs and hiking as part of my quest to get home.

So, to say I have experienced most everything imaginable in my travels would be an understatement.

Or so I thought.

I had just returned from back-to-back trips to Colorado. Between the two assignments, I had been ice climbing, skinning into a backcountry hut on a splitboard, fat-biking and snowboarding at two resorts. On March 8, as I was returning from my most recent trip, I didn’t notice any changes in airport congestion, even though the impending pandemic was already garnering most of the air time on news stations across the country.

My wife and I were excited about our upcoming trip to Southern Vermont to enjoy a little East Coast skiing for our annual trip with family. I got home on a Sunday night and we were planning to leave on Friday — Friday the 13th, of course.

As we were driving north, my wife streamed Gov. Jim Justice’s address on her phone. While he addressed the possibility of extreme measures, it was more a prelude of what we all sensed was coming.

We stayed overnight in Scranton, Pennsylvania, and enjoyed a casual start to the day before making our way to the airport in Albany, New York, to pick up family members joining us for this weeklong adventure.

On the way to airport, I received a call from the resort asking if we were still planning to arrive that day and assuring us the resort was operating at full capacity. Given the collapsing situation around us, this was very reassuring.

After picking up our family, we continued our journey north. As we inched closer to our destination, and after crossing into Vermont, snow blanketed the landscape and was serendipitous of our final location, Mount Snow.

After departing the highway, we began winding our way through the Green Mountains toward the idyllic Mount Snow Grand Summit Resort. Built just over 20 years ago, the resort was designed to mimic the grand hotels of yesteryear. Its turn-of-the-century appearance gave it an iconic look of a bygone era.

Upon arriving, the hotel and slopes were bustling with guests adorning ski boots, bibs and jackets. A valet took our keys and our luggage was loaded onto a cart that would be brought to our room.

Our room was located at the end of the hall of the second floor. It was also at the end of the building, and our window afforded us a view of the slopes, as well as the Grand Summit Express high speed lift. What a glorious week this was going to be.

This is where it starts to get eerily weird.

After a relaxing dinner at the hotel restaurant, we took a walk around the base to get a better picture of the layout ahead of our first day of skiing.

That’s when I received a call from my contact at the hotel. He had just received word that Vail Resorts was shuttering all its properties amid the encroaching pandemic. Did I mention that we had just checked in just hours earlier?

The entire resort — restaurants, bars, lifts, ski shops and lodging — would be closed for a minimum of one week. They were being extremely optimistic at this point. As several members of our party had flown to the northeast, we were relegated to making the best of the circumstances and enjoying our solitude.

My wife and I made a shopping list and drove the 30 minutes to the closest grocery store. As we perused the aisles, the one thing that paralleled our own supply chain back in West Virginia was the absence of paper products, namely toilet paper. Staying at a hotel, that wasn’t a concern that plagued our unique vacation. Fortunately, we left the market with enough items for five or more days.

The next day, Sunday, can only be described as a mass exodus. The front desk was alive with people checking out one after another. The valet attendants hurriedly gathered owners’ cars and loaded their gear and luggage. By the end of the day, the 196-room resort had just over half a dozen occupied rooms.

Strapping on snowshoes, we set out from the lodge, walking on the slopes that just a day before were crowded with enthusiasts carving turns back toward the base. The lifts sat idle, as they would each day after closing. The difference would be that they would not open again this season. It was like a veritable ghost town. With the exception of a few others seeking outdoor recreation, we had the entire mountain to ourselves in this surreal landscape.

That evening, we made a trip to a neighboring community to unknowingly enjoy what would be our one and only dining experience outside of our hotel suite.

By the second day, the only thing open on the entire mountain was the front desk of the hotel. Housekeeping had informed us the previous day they would no longer be making rounds and that any additional items could be retrieved from the front desk. A valet had retrieved our car and returned our keys. Since we were one of only a few guests, they parked our vehicle in the short-term spaces at the front of the hotel.

This was to be a trip marked with adventure and excitement. Activities were arranged for all ages including skiing, snow tubing, spa visits and snowmobiling. With the closing of the resort, all of those plans disappeared in the blink of an eye. The indoor pool, spa, resort gym — all closed.

On day three, only two rooms in the entire resort remained occupied. Though we never saw the other guests, I inquisitively asked the front desk each day how many residents roamed the sprawling resort. We procured a few sleds from a local hardware store, and our group of five had the entire snow tubing park to ourselves. The upside was that we didn’t have to wait in any lines. The downside was we had to walk back up the slope after each run.

Unsure of what would happen with airline travel, our family that had flown to Albany opted to change their itinerary and return ahead of schedule. The morning we left to take them back to the airport, the front desk informed me that my wife and I would be the only guests in the entire resort when we returned.

As we returned to our apocalyptic accommodations amid the pandemic, I strolled the empty halls. In all of my travels, I had never experienced such desolation. When returning from retrieving extra towels from the front desk, I would open the door slightly and announce, “Here’s Johnny!” My wife was less than amused.

Over the remaining three days, we walked the empty grounds of the resort. Occasionally, we would spot a homeowner from the area walking in the distance. This was our only human contact aside from the lone front desk attendant that rotated out with each shift. I roamed the halls, though I didn’t spot any creepy twins or experience any other paranormal activity.

I contemplated writing a novel as the situation and circumstances seemingly beckoned me to do so. I had this once-in-a-lifetime inspiration and an experience that only Stephen King could bring to life.

For my fellow GenXers, we all remember where we were and what we were doing the day the Challenger exploded and when the World Trade Center collapsed. As the pandemic is a worldwide event, it will undoubtedly be remembered for generations to come.

My experience in the vacant hotel in the Green Mountains of Vermont will always resonate as one of those memories. For now, I will look forward to next season, when I can, hopefully, return and enjoy the resort in a different light.

Clay Abney is a Charleston-based travel writer who loves bouncing around the globe and exploring new adventures in the Mountain State. Reach him by email at clayabney@gmail.com.