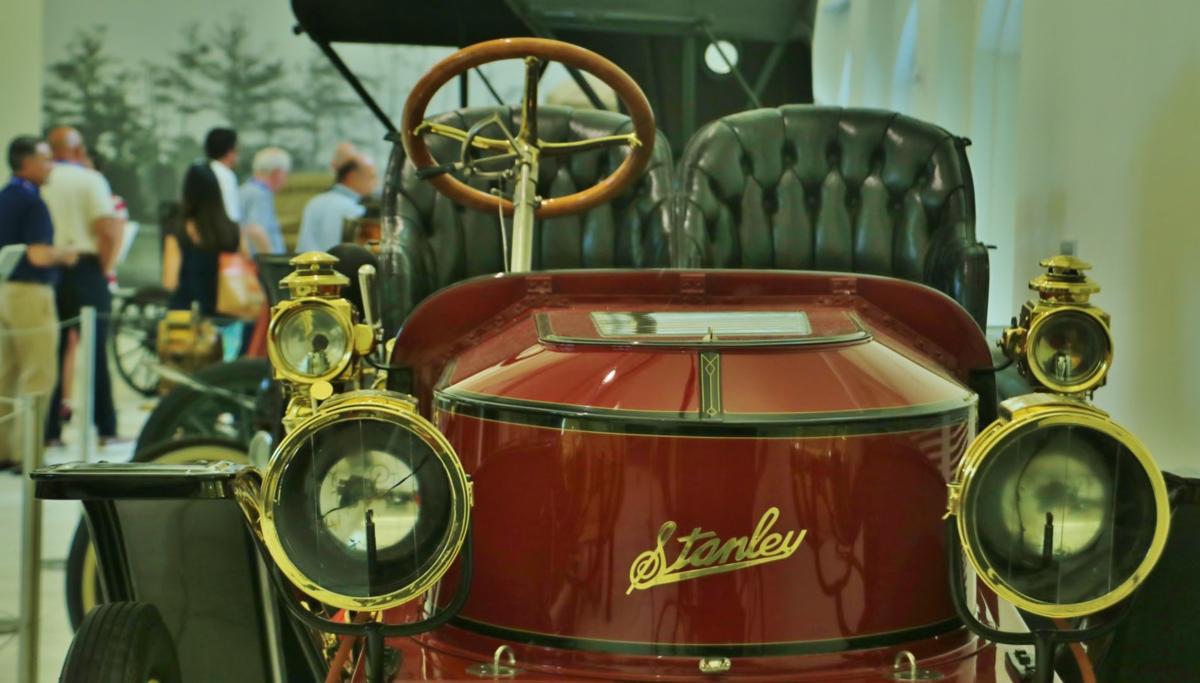 The 1909 Stanley Steamer Model R Roadster ran on steam heated by a kerosene pilot light and took 30 minutes to power up. 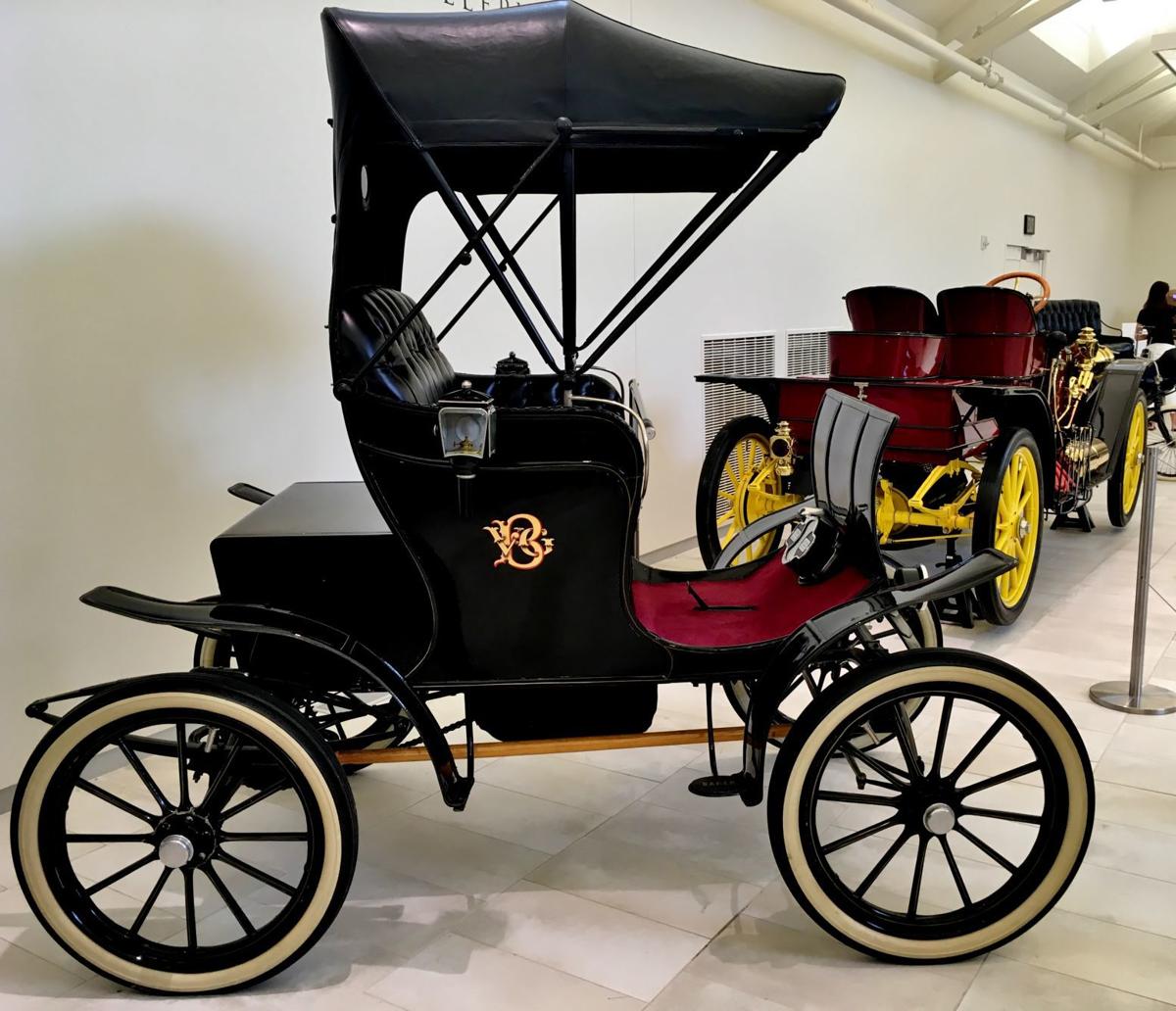 Phaetons, like this 1908 Chubb Phaeton model by Brewster and Co., were informal carriages open to the elements. 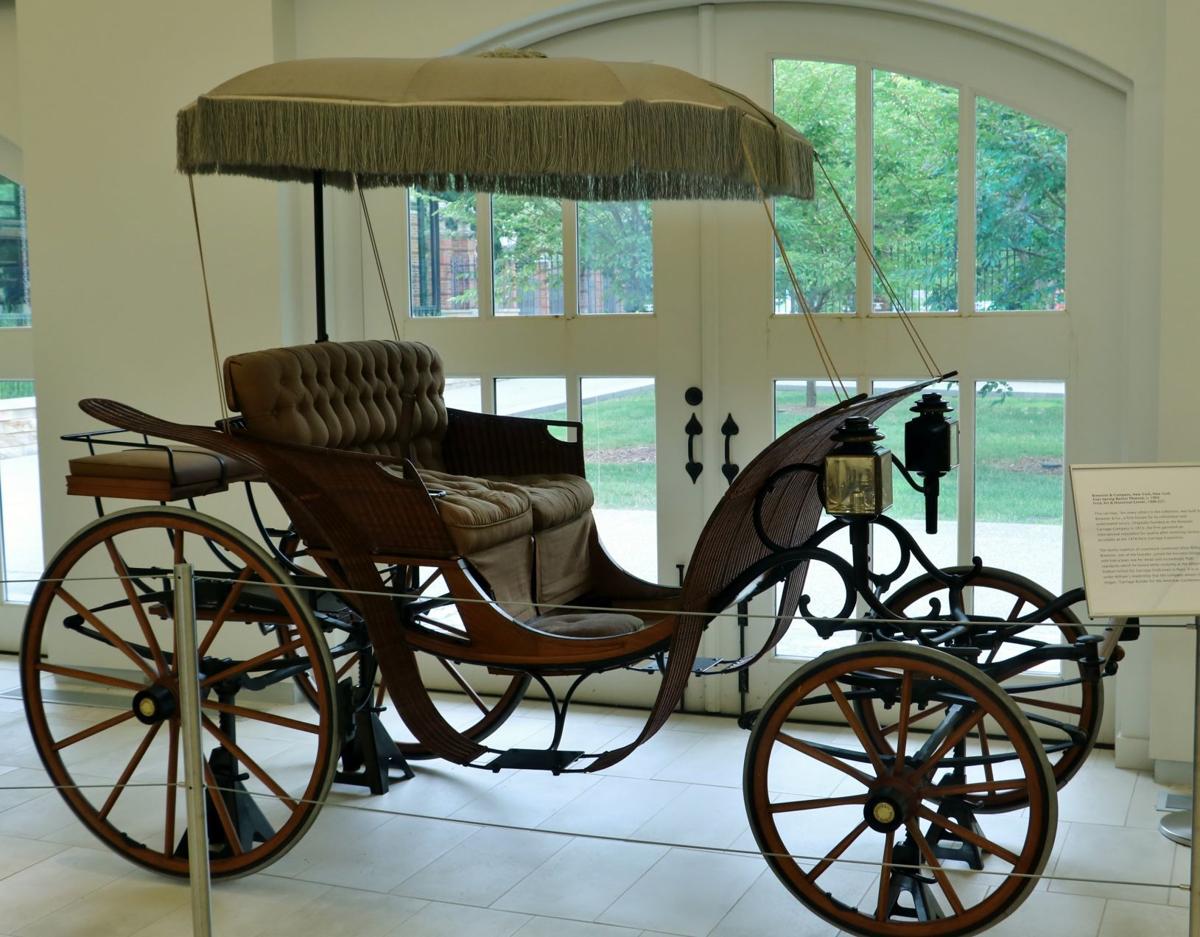 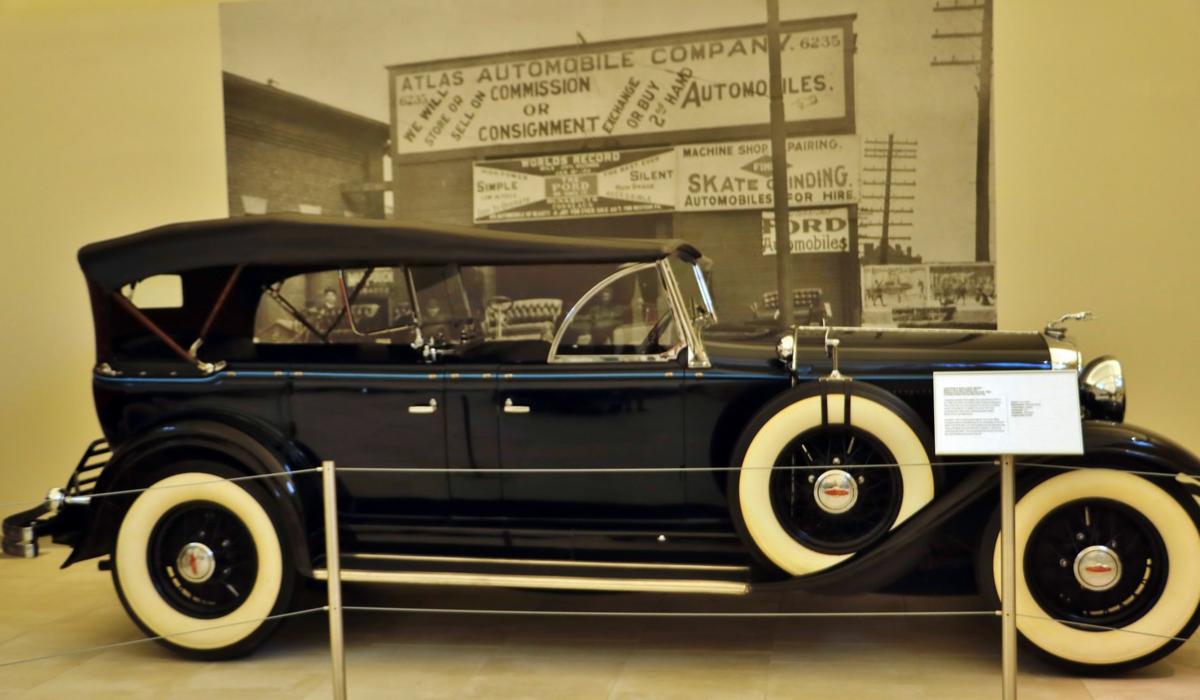 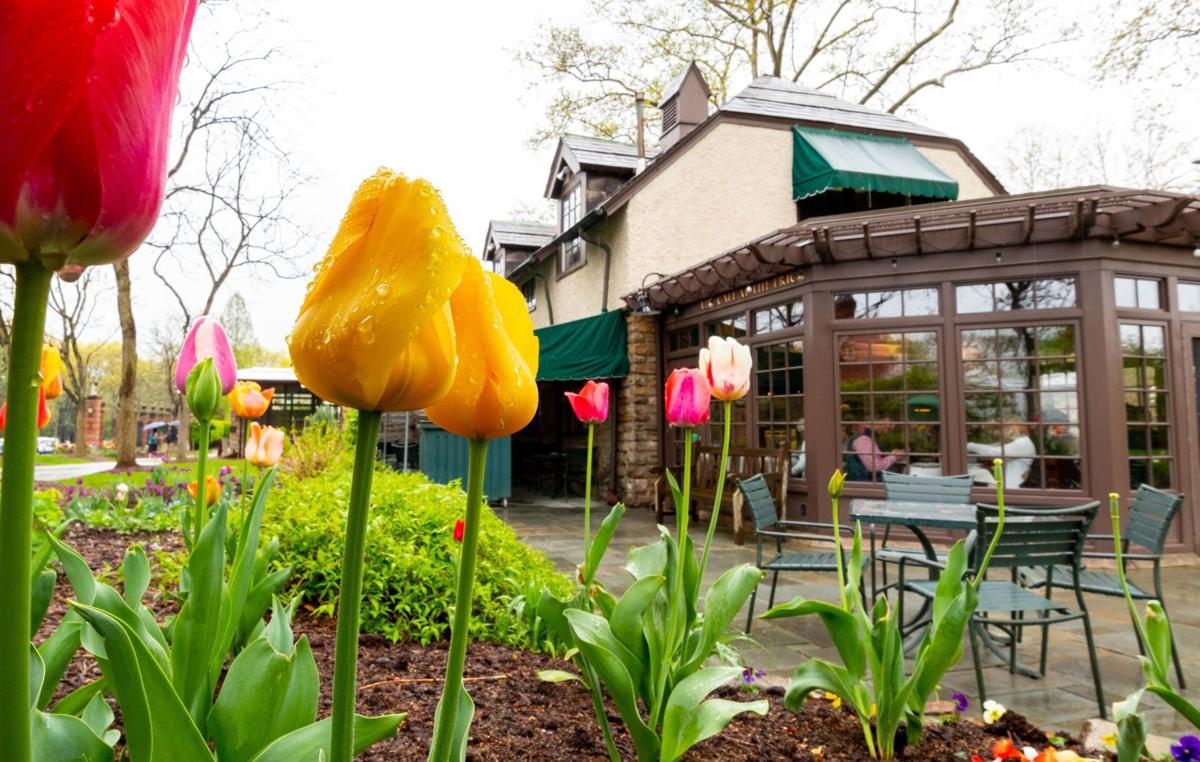 The Cafe at the Frick offers seasonal, local fare in what was once a carriage house. 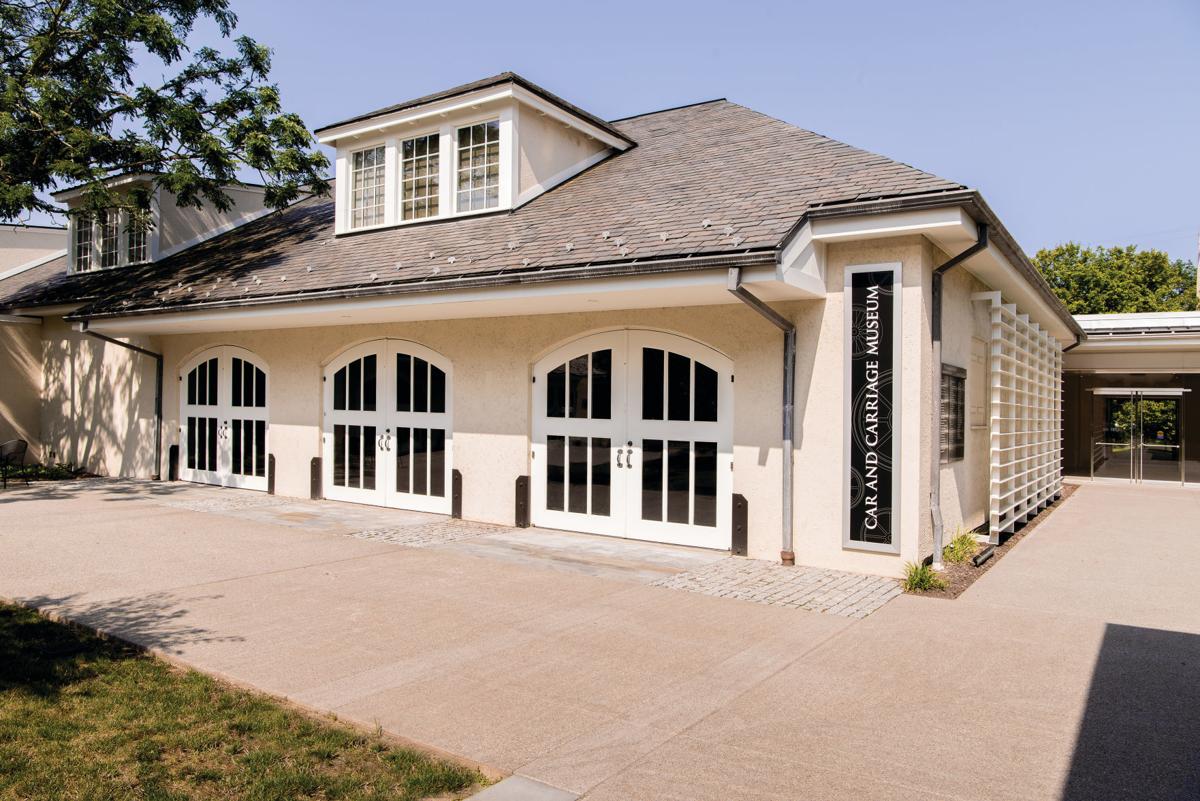 The East entrance of the Frick Car and Carriage Museum.

A panoramic view of the grounds that were once the estate of industrialist and financier Henry Clay Frick. 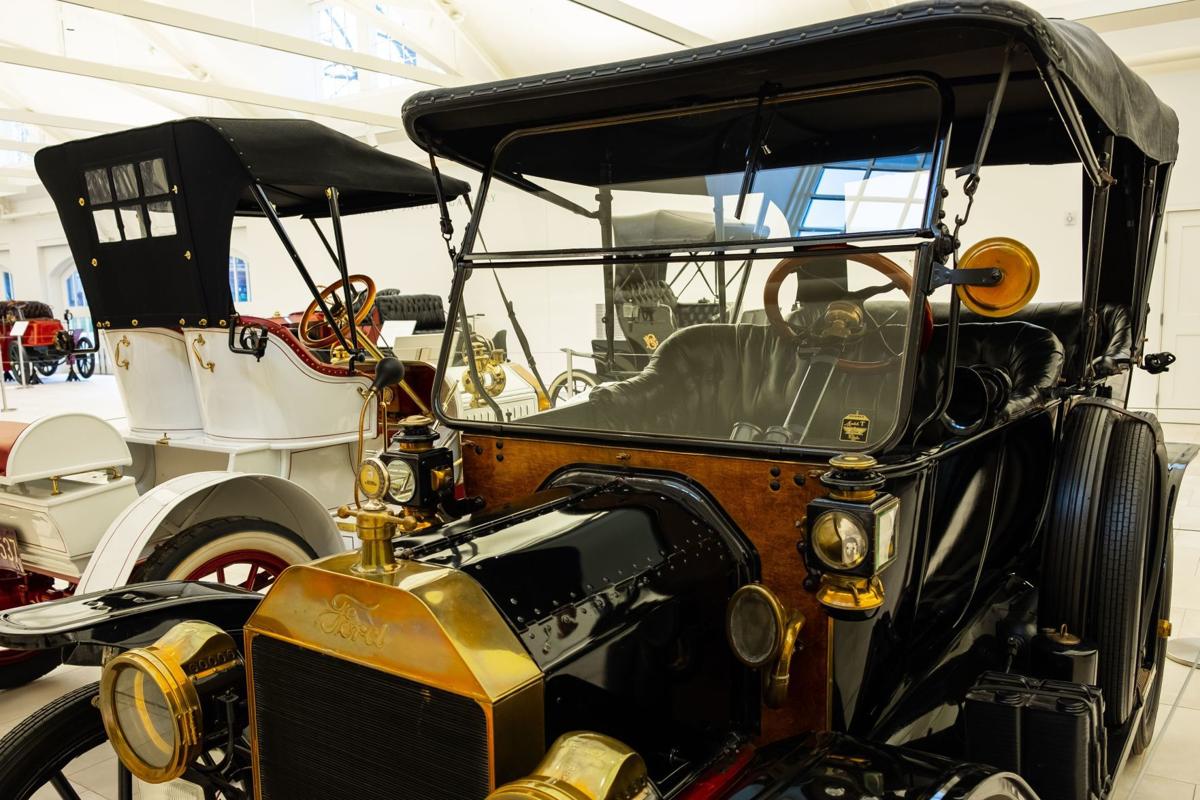 The Model T Ford was the first vehicle to be assembly-line produced. The lower cost made it more affordable for the masses.

The 1909 Stanley Steamer Model R Roadster ran on steam heated by a kerosene pilot light and took 30 minutes to power up.

Phaetons, like this 1908 Chubb Phaeton model by Brewster and Co., were informal carriages open to the elements.

The Cafe at the Frick offers seasonal, local fare in what was once a carriage house.

The East entrance of the Frick Car and Carriage Museum.

A panoramic view of the grounds that were once the estate of industrialist and financier Henry Clay Frick.

The Model T Ford was the first vehicle to be assembly-line produced. The lower cost made it more affordable for the masses.

PITTSBURGH — The 1914 Model T Ford at the Frick Car and Carriage Museum in Pittsburgh should be noteworthy for those who make the 228-mile journey from Charleston.

The first model car to come off an assembly line, the Model T, was inexpensive and affordable, which gave more people a chance to travel greater distances for leisure or business, freeing them from the short, limited distances that could be traveled via carriage and wagon.

It’s the car that eventually led the way for the masses to make trips we take for granted today — like traveling from Charleston to Pittsburgh to see the impressive Frick collection.

The car is one of 11 on display from the museum’s permanent collection, which also features 12 carriages from the Gilded Age — many of which were owned by the Frick family.

Located on the grounds of the former estate of industrialist and financier Henry Clay Frick, the museum dates back to 1950 when daughter, Helen, decided to turn the estate and family mansion into a museum. As part of her plan, she transported the Frick carriages, purchased roughly between 1888 and 1908, as well as the family cars, from their alternate homes in New York City and Pride’s Crossing, Massachusetts. To house them, she built a carriage house, where she left them to sit but took special care to preserve them.

In 1997, a local business man and collector, G. Whitney Snyder, and his brother, William Penn Snyder III, contributed to the construction of an addition to the carriage museum to house 18 of their antique automobiles, which they loaned to the museum.

Following G. Whitney’s death in 1999, the cars were donated to the collection where they remain on display with six others, including two from the Frick family — a 1914 Rolls — Royce Silver Phantom and a 1931 Lincoln Sport Phaeton.

Admission to the museum is free of charge, as are the 45-minute long guided docent tours, offered on Tuesdays at 1 and 3 p.m. and Saturdays and Sundays at 11 a.m. and 1 and 3 p.m. Docents undergo a 20-hour training program to learn about Frick family history, the carriage industry, the transition from the carriage to the car and the societal implications the car had on the lives of everyday people.

Not only do the tours discuss individual cars, they look at the social history of transportation: the wealth needed to have and care for an extensive carriage collection; the transportation norms of the day — walking, one cart or wagon to get to town, hackney cabs, etc.; the use of steam, electric and gas in early automobiles; innovations developed from the racing industry; and the autonomy and independence the automobile brought to the working and middle classes, women and people of color.

On tour with Megan Crutcher, a young woman who’s studying for a master’s in history at nearby Duquesne University, we began looking at Frick’s Silver Phantom, which stands near the front of the museum. Just across the aisle, what is believed to be the first car in Pittsburgh, a 1898 Panhard et Levassor Tonneau from Paris, was purchased by the Heinz family. Interestingly, the car is painted red (for ketchup), green (for pickle relish) and yellow (for mustard), three commodities that helped make the Heinz Company successful.

Nearby, as we looked at several of the carriages and two sleds used for winter excursions, Crutcher explained the difference between a brougham and a phaeton carriage, something I always wondered about ever since reading my first Charles Dicken’s novel.

Broughams, it seems, are more formal and enclosed, which makes them handy for use in inclement weather. Phaetons, on the other hand, are informal and open to the elements. Frick’s wife, Adelaide, was considered a horse woman, one who enjoyed riding, and her 1902 phaeton is included in the collection.

Daughter Helen enjoyed carriage life, and her pony-driven Spider Phaeton, purchased for her use when she was 9 years old, stands next to a four passenger bobsled, circa 1906.

“Pony phaetons were bought only by the wealthy because they were meant for their children and used strictly for fun and had no other utilitarian use,” Crutcher said.

Most of the carriages and cars are over 100 years old, and the Frick has a no-touch policy because oils and dirt from skin can cause lasting damage to the objects in the collection. The good news for touchy-feely types is that you may board and sit in the 1929 green convertible Model A Ford, a classy car that makes for a wonderful photo op.

Something I learned on the tour is that electric cars were around a lot longer than expected. The Electric Stanhope, made by the Baker Vehicle Company of Cleveland, dates back to 1903 and gave a smooth, quiet ride. The problem is, it had to be charged for 8 hours in order to travel a maximum of 20 miles. Instead of a steering wheel it had a rudder. One advantage: It had no dangerous boilers or flames as part of its running mechanism.

Which is something you can’t say about the 1909 Stanley Steamer Model R Roadster, which ran on steam heated by a kerosene pilot light and took 30 minutes to power up.

An interesting hybrid that connects technologically and visually to the bicycle and horse-drawn vehicle age, the 1901 Knox Model A Runabout has a single front wheel and a running gear out of the bicycle design handbook as well as a body typical of the carriage era.

Currently, the museum is offering a temporary exhibit titled “The Hunt for a Seat: Sporting Carriages in the Early Twentieth Century.” Planned to coincide with “A Sporting Vision: The Mellon Collection of British Sporting Art from the Virginia Museum of Fine Art at The Frick Art Museum,” this special installation includes four loaned carriages to supplement three in the Frick collection and creates a broader picture of the use of carriages for sport and recreation.

In addition to sporting carriages, the exhibition features the fashions associated with these activities. Women’s riding habits will illustrate appropriate dress for riding side saddle, while “hunting pinks” represent the proper apparel for a fox hunt.

The estate includes free admission to the art museum, greenhouse and beautifully landscaped grounds. There is a fee, however to tour Clayton, the home of the Frick family from 1882 to 1905. Meticulously restored, the 23-room mansion features an impressive array of fine and decorative art objects purchased by the Fricks. Docent-led tours of the home provide an inside view of daily life at the turn of the 20th century and a better understanding of Pittsburgh during the Gilded Age.

For places to dine on property, you can enjoy contemporary American fare indoors in what once served as a carriage house for a family who lived on the grounds, or outdoors on the patio at The Cafe at The Frick. Executive chef Kevin Watson prepares unique, locally sourced, seasonal fare and pastry chef Chase Goumas is a master when it comes to desserts.

Items I tried for lunch were a chilled watermelon gazpacho, an artfully presented roasted yellow beet salad with chevre, a walleye catch-of-the-day entree and a stone fruit (plum and apricot) crumble with vanilla bean gelato.

The Cafe is open for brunch and tea on Sundays, lunch Tuesday through Saturday with dinner on Friday evenings and afternoon tea on Saturday afternoons.

For places to stay nearby, the Indigo Hotel is a three-year-old, 135-room boutique hotel located in the shadow of the magnificent East Liberty Presbyterian Church. Located in one of Pittsburgh’s formerly most fashionable districts, the hotel echoes the neighborhood’s Flapper era past of the 1920s and 30s, a time when residents dressed nattily, went out to one of East Liberty’s seven theaters and afterward headed to a “secret drinking club” to listen to jazz.