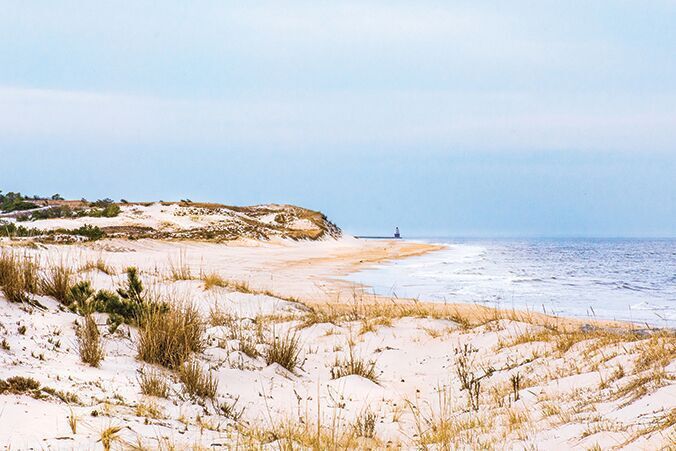 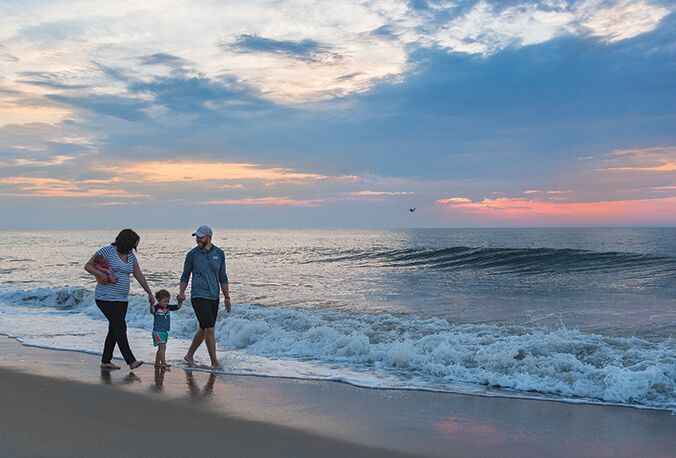 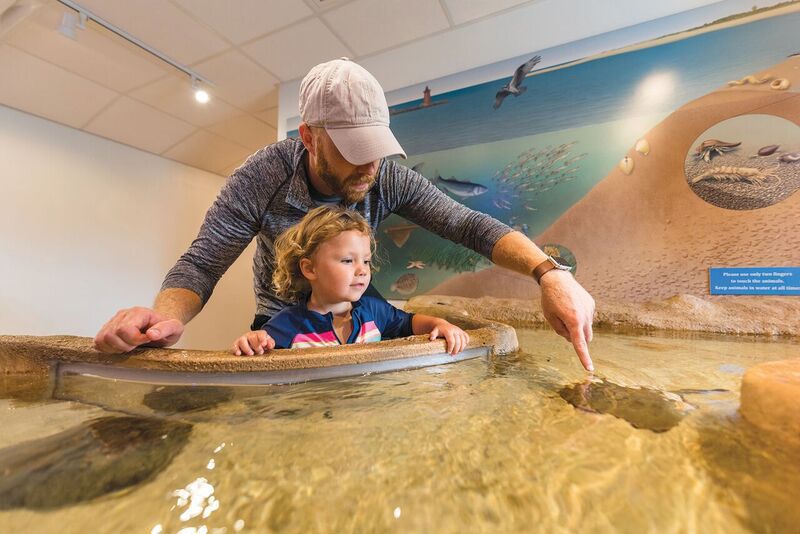 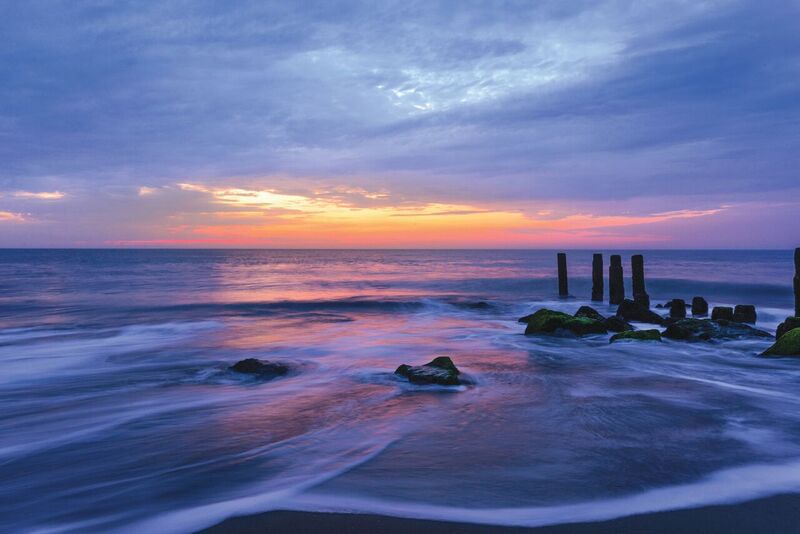 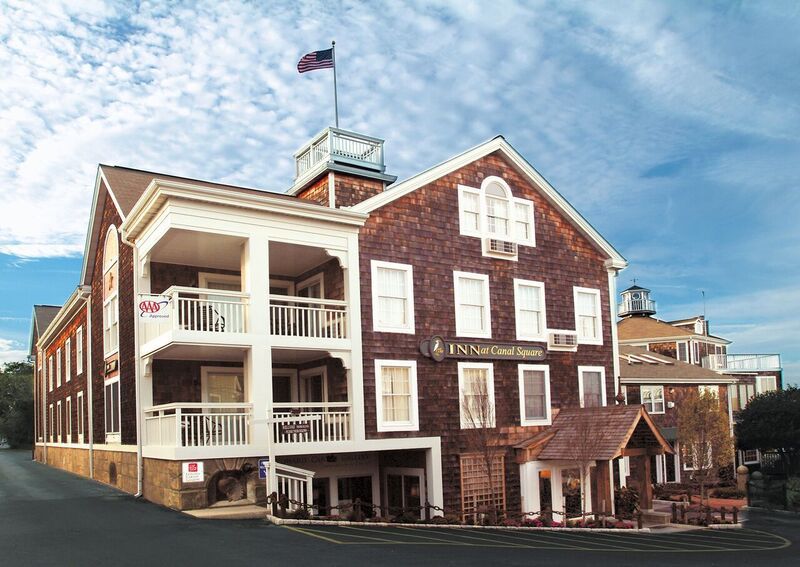 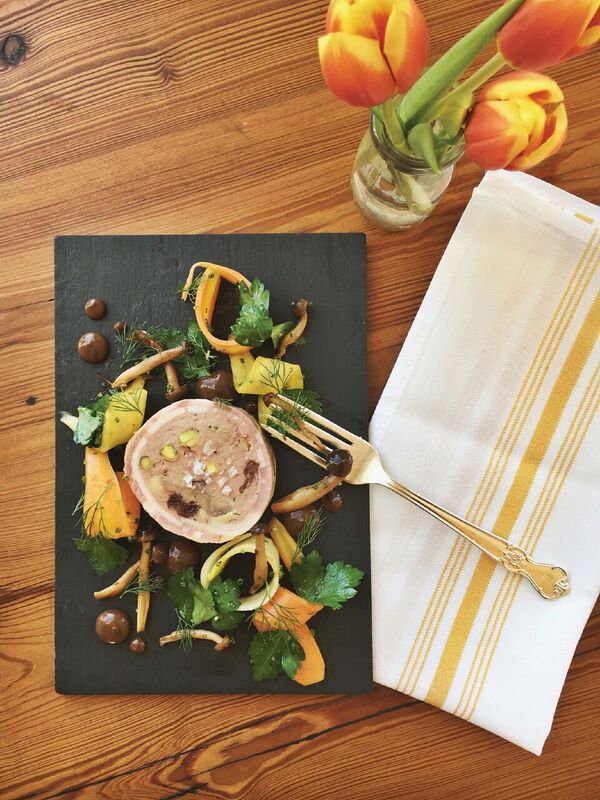 Dining at Heirloom is a highlight of visiting Lewes. 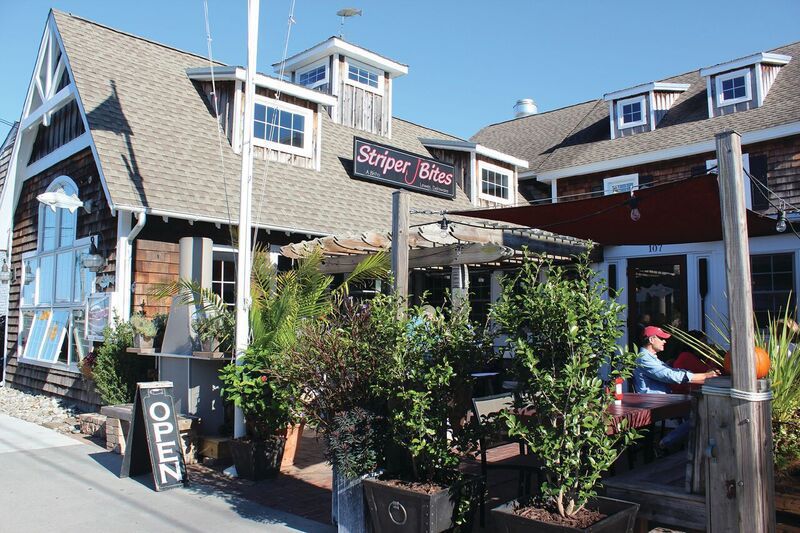 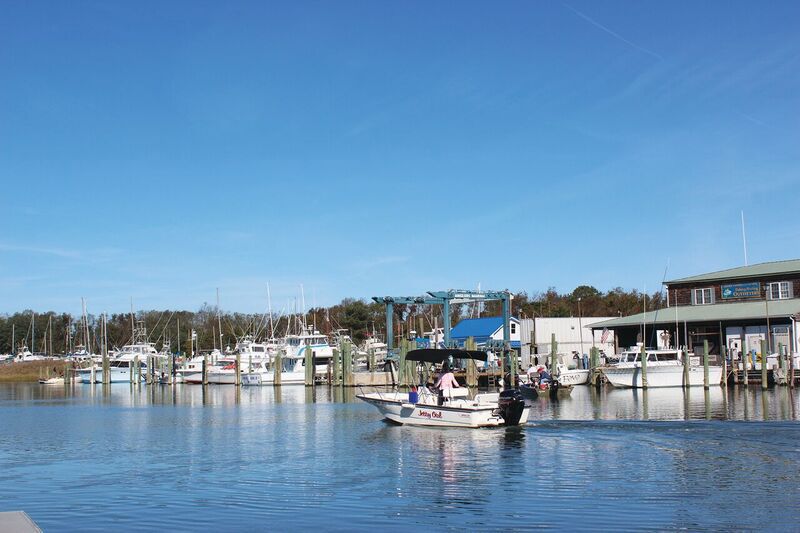 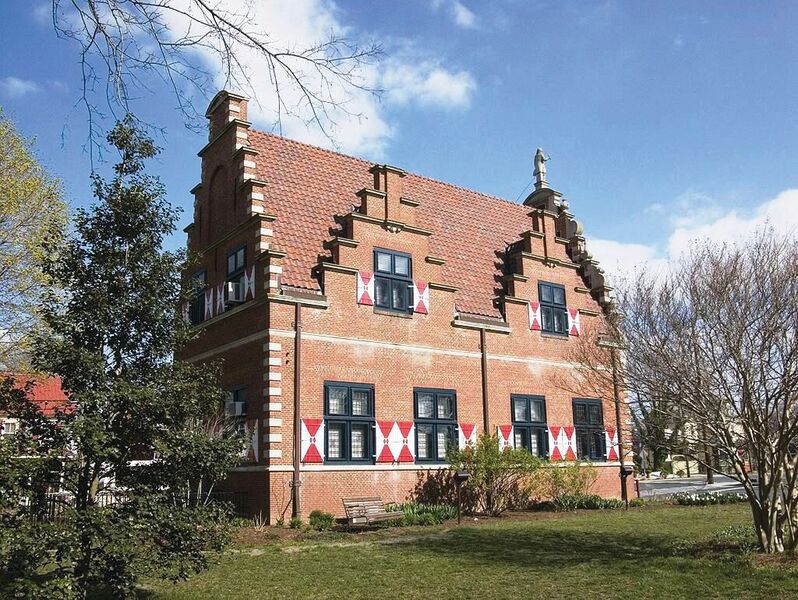 Zwaanendael Museum in Lewes, Delaware, is a replica of the 1613 old town hall in Hoorn, Holland.

Dining at Heirloom is a highlight of visiting Lewes.

Zwaanendael Museum in Lewes, Delaware, is a replica of the 1613 old town hall in Hoorn, Holland.

The building jumps out at you for its incongruity. Situated amid vacation cottages and Victorian homes turned upscale restaurants, just a block or so from the modest boats docked in Rehoboth-Lewes Canal, stands an ornate two-story brick building with carved stonework, a stepped facade gable and decorated shutters that looks like something from an old town square in Europe.

The Netherlands, to be exact, for the building — the Zwaanendael Museum — is a replica of the 1613 old town hall in Hoorn, Holland. But why is it here in Lewes, Delaware?

To answer that, you need to know a little history of this seaside town of 3,000 on the Delaware Bay, roughly 7 1/2 hours by car north and east of Charleston.

Zwaanendael — “valley of the swans” in Dutch — is the name given to this place by the city’s earliest European inhabitants when they arrived here in 1631 to establish a whaling colony. Three hundred years later, the distinctive building was constructed to commemorate that colony and serve as a history museum, which now features, among other displays, artifacts salvaged from the British warship HMS DeBraak, which sank off the coast of Delaware in 1798.

Pride in its history permeates this neighborly town with its tree-lined sidewalks, 19th-century homes, town beach and downtown district populated by independent shops and restaurants.

Oh, and one more thing you need to know if you’re going to visit: the town is named for Lewes, England, and is pronounced with two syllables: Loo-iss.

Start your day with a walk or bike ride in town or along one of several trails in Cape Henlopen State Park. If you don’t have your own bicycle, you can rent one in Lewes from Seagreen Bicycle or Lewes Cycle Sports, or borrow one from the state park for a two-hour period.

The 3.2-mile (one way) Gordons Pond Trail skirts the western side of the 900-acre saltwater Gordons Pond and provides distant views of the beaches and ocean. Keep an eye out for osprey and bald eagle nests and a variety of wildfowl.

If you’re up for a longer trek, try the 6.4-mile (one way) Junction & Breakwater Trail, which winds through pine forest and passes wetlands and farmlands as it connects Lewes with Rehoboth Beach to the south.

Most of the area that is now Cape Henlopen State Park was, until the mid-1990s, a U.S. military fort that was built in 1941 to defend Philadelphia as well as the oil refineries and factories along the Delaware River. You can learn more about that history at Fort Miles Museum and Historical Park, located inside the state park.

The historical park includes restored barracks, a mess hall, and a growing collection of guns in its Artillery Park, including Big MO, a gun from the USS Missouri under which the Japanese surrendered on Sept. 2, 1945.

Take a guided tour of one of the fort’s concrete bunkers. Before leaving the area, climb the stairs of the concrete lookout tower at the historical park entrance for a sweeping 360-degree view. It’s one of 11 military watchtowers that once punctuated Delaware’s Atlantic Coast, and it’s the only one open to visitors.

By now, the afternoon sun is beating down, and it’s time for a lunch recharge. A good choice is Striper Bites back in town, a casual restaurant big on seafood. Try the fish tacos or the signature Striper Bites Club made with blackened mahi mahi and applewood-smoked bacon.

A sunny afternoon is prime beach time, whether it’s late spring, summer or fall. Those who’ve visited in September or October know how pleasant it can be here when air temperatures hover in the 70s and the ocean water is still as warm as in June.

Shoulder-season visitors are attracted by festivals that include April’s Tulip Festival, September’s Dragon Boat Festival, and the Boast the Coast Maritime Festival each October, as well as by lower lodging rates and the opportunity to enjoy the town’s amenities during a less-crowded time.

Going to the beach in Lewes means one of two destinations: Lewes Beach, a calm bayside beach that runs from Roosevelt Inlet to the Cape May-Lewes Ferry Terminal and is perfect for anyone who doesn’t like the big ocean waves, or Cape Henlopen State Park, which boasts six miles of pristine dunes and sands along the Atlantic Ocean. Both beaches have shower/changing facilities and restrooms, and the state park also has a food concession.

After a full day of outdoor activities, it’s time to wind down. If you’re sans children, consider before-dinner drinks at Gilligan’s Waterfront Restaurant, where the open-air bar looks out on the canal. There’s also indoor and outdoor seating for dinner. For dinner with kids, consider The Pig and Publican in a strip mall on the other side of the canal.

Adults looking for a memorable dining experience should head to Heirloom, which serves dinner in a sprawling 1899 white Victorian house across the street from the Zwaanendael Museum. Heirloom owner Meghan Lee designed the restaurant with a homey coastal decor that will make you feel as if you’re dining at a friend’s home — if your friend is a gourmet chef, that is.

The menu changes completely every month or so. In summer, you might select from appetizers such as cantaloupe gazpacho, house-stretched burrata with peaches and mint, or beet and blueberry salad. Seasonal entrees might include scallops with sweet corn puree, radishes, peas and mushrooms, or lemon-roasted quail with summer squashes, toasted farro and green tomato jam.

Lee sources her meats and produce from local and regional farms and orchards, including Delaware’s Fifer and Bennett Orchards and Reid Farm; her crabs come from the Chesapeake; scallops are from Cape May, New Jersey, and so on. There’s dining indoors and on the patio, and reservations are recommended.

If you still haven’t run out of steam, you can often catch live music at Jerry’s Seafood on Second Street or Crooked Hammock Brewery just outside town near Route 9.

Among the prettiest places to stay in town is the boutique Inn at Canal Square, centrally located next to Canalfront Park and within walking distance to many attractions. The inn’s weathered brown cedar shake siding and formally decorated lounge spaces, complete with fireplaces and fresh flowers, will remind you of a New England seaside mansion. Most of the well-appointed rooms and suites have balconies and overlook the scenic canal.

Another upscale choice is Hotel Blue, on the opposite side of the canal, which also boasts balconies and spacious rooms. Fans of Dogfish Head beers might consider staying at the motel-style Dogfish Inn. Dogfish Head founder Sam Calagione, who lives in Lewes, has been known to stop by to chat with guests around the inn’s firepit.

Day 2: History on the bay

Fuel up for an active day at shabby chic Nectar Cafe & Bar, which serves up locally roasted coffee, an array of juices and breakfast staples along with creative dishes such as butter pecan French toast and spinach lavender omelets.

Today is a day to explore more of Lewes’ history and waterways. Start a few blocks away from Nectar at the Lewes Historical Society’s Shipcarpenter Street Campus, a collection of nine historic buildings dating from a circa-1700 plank house to a late-19th-century one-room schoolhouse. Most of the buildings were saved by the historical society and moved here from nearby locations. Guided tours are offered of the complex and the buildings’ interiors.

The historical society also owns the so-called Cannonball House in town, where you can learn about the 22-hour British bombardment of Lewes during the War of 1812. Amazingly, there were no human casualties, which gave rise to this ditty of the period: “Commodore Beresford and all his men managed only to wound a pig and kill a hen.”

Lewes is rightfully proud of the newest addition to the town’s attractions: the Lewes History Museum, which opened a year ago. Look for it at 101 Adams Ave., next to the town’s new library. The well-done history museum covers Lewes’ nearly 400 years of recorded history and goes back even earlier, with an exhibit on its native peoples, the Lenni Lenape Indians. Along with entertaining backstories, you’ll find artifacts that were drawn from a rich collection that the historical society had in storage.

Grab lunch downtown, perhaps a gourmet pizza at Half Full or Mexican at popular Agave, where the bar offers more than 100 kinds of tequila.

Today’s the day to spend time out on the water. Rent a standup paddleboard or a kayak from Quest Adventures, or sign up with the company for a guided paddling tour. In addition to ocean, marsh, creek, sunrise or full-moon paddles, you can take part in specialty tours that get you up close with dolphins or include a stop at the Dogfish Head Craft Brewery in Milton, Delaware.

If you’d prefer that someone else power the boat, take a morning or afternoon dolphin-watching cruise with Fisherman’s Wharf Ocean and Bay Fishing and Cruising. Pirates of Lewes Expeditions combines pirate lore with a kid-oriented swashbuckling adventure, complete with pirate sashes, treasure maps and water cannons.

Another good option is Cape Water Tours and Taxi, which offers a number of themed cruises, including an eco-tour, a bay cruise led by scientists and a lighthouse tour.

Before ending your trip and heading out of town, enjoy homemade ice cream at King’s, and stop in the shops and boutiques to treat yourself or to purchase a gift for someone who wasn’t lucky enough to accompany you on your visit to this historic seaside town.