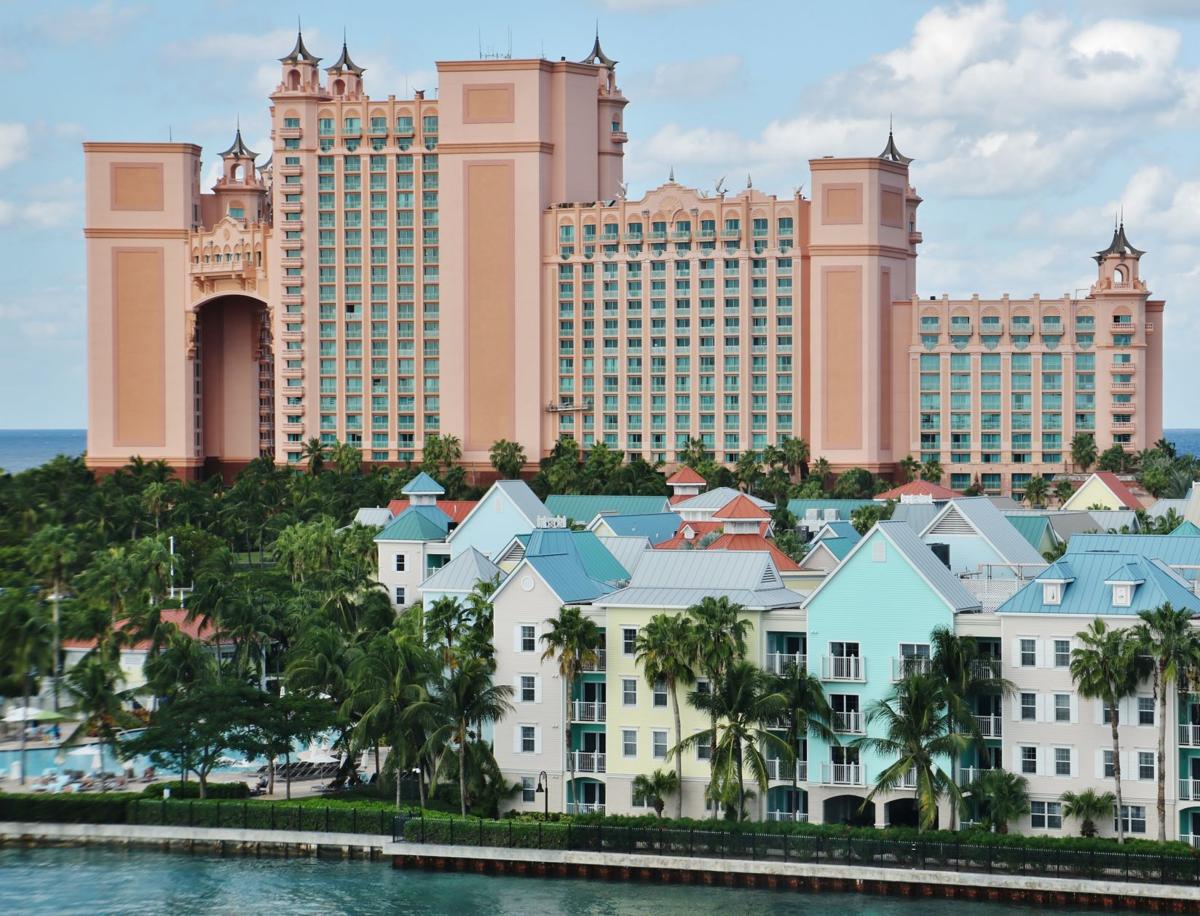 The tropical pastel-colored buildings outside the Atlantis Resort Paradise in Nassau house upscale shops and a variety of restaurants. 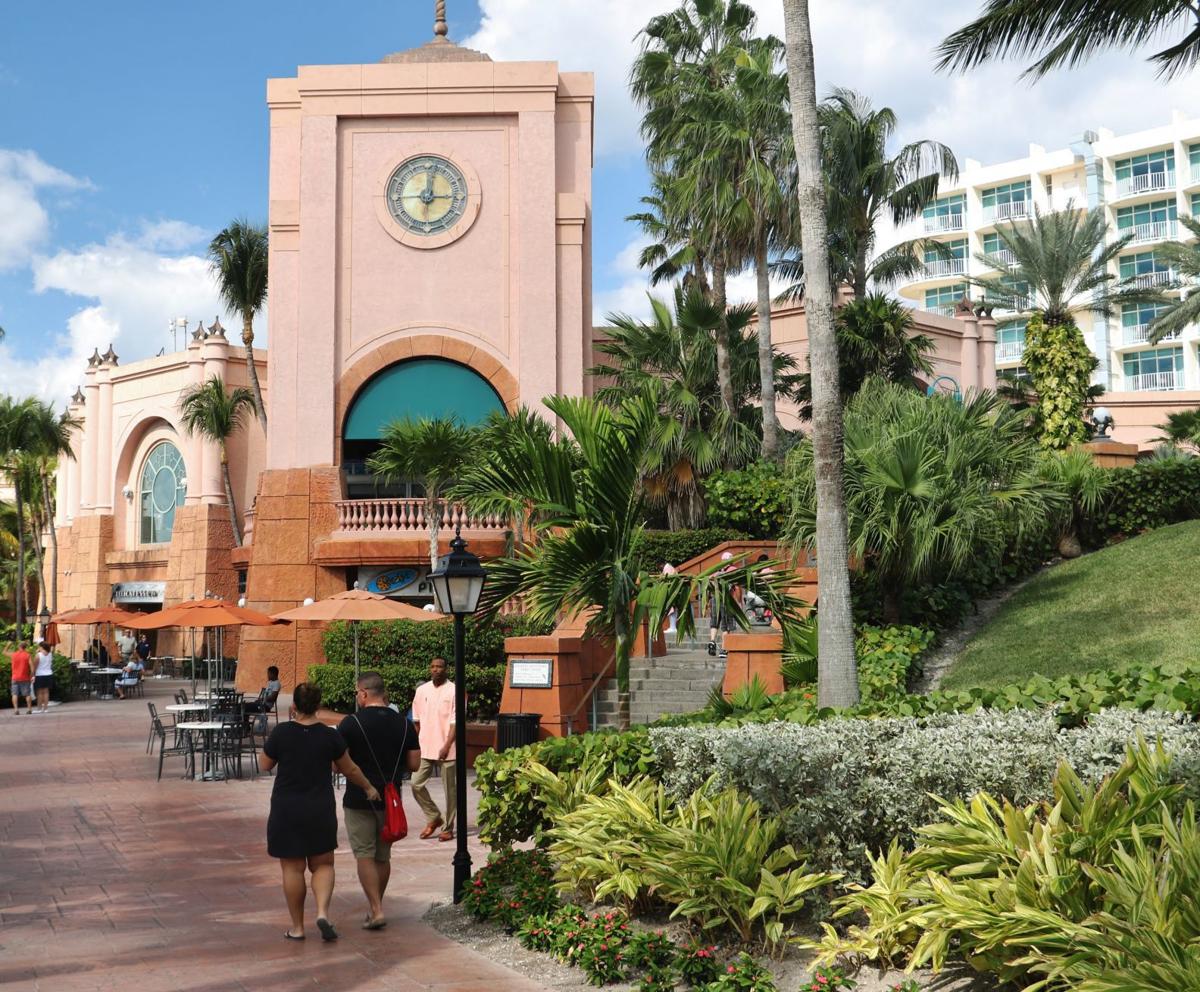 Entrance to Atlantis resort from Marina Village in Nassau, Bahamas. 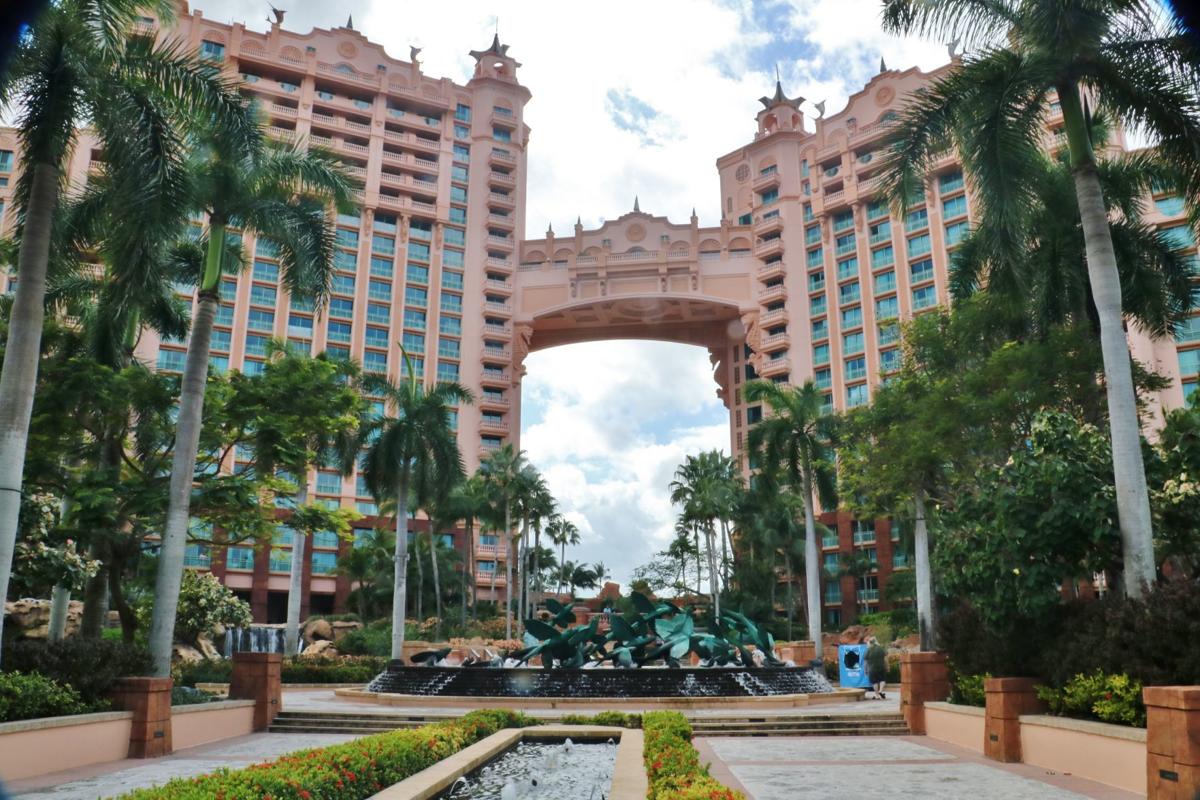 The Atlantis’ Royal Complex with its Bridge Suite shown in between the Towers. The suite comes with 10 rooms, including a 1,250-square-foot living room, a dining area with a 22-carat gold chandelier and seven butlers and attendants. 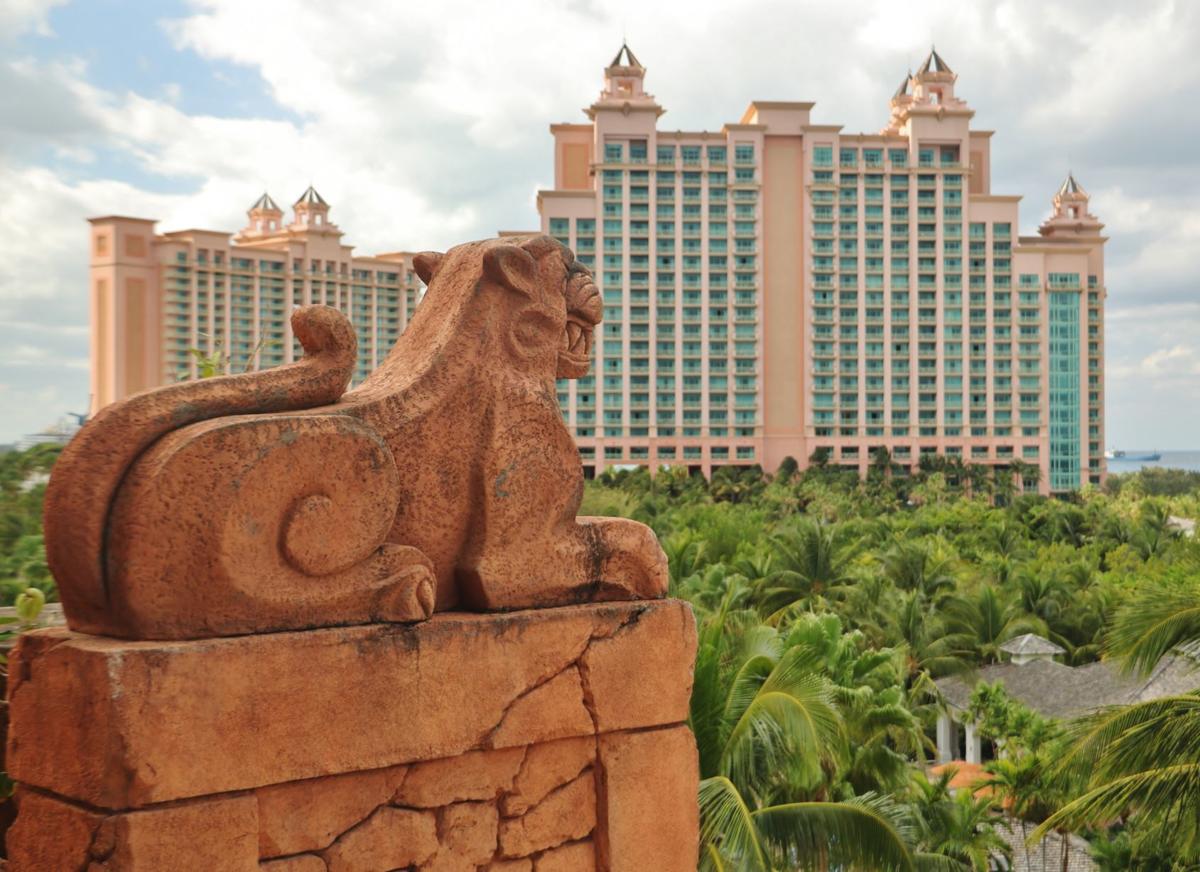 A scenic look at a section of Atlantis in Nassau, Bahamas.

The tropical pastel-colored buildings outside the Atlantis Resort Paradise in Nassau house upscale shops and a variety of restaurants.

Entrance to Atlantis resort from Marina Village in Nassau, Bahamas.

The Atlantis’ Royal Complex with its Bridge Suite shown in between the Towers. The suite comes with 10 rooms, including a 1,250-square-foot living room, a dining area with a 22-carat gold chandelier and seven butlers and attendants.

A scenic look at a section of Atlantis in Nassau, Bahamas.

From my balcony on the sixth deck of the Carnival Pride, I could spot the coral pink colored towers of Atlantis Resort Paradise rising up as if out of the ocean’s blue waters as our cruise ship pulled into Nassau.

A visit to the Bahamas’ mega resort, the largest in the Caribbean, had been on my wish list for quite some time. Now that I had more than a half-day off ship to look around Nassau, I decided to skip one of the cruise line’s shore excursions and head straight for Paradise Island.

While you can take a taxi from the dock to Atlantis, I opted for a water taxi, which gets you there in 10 minutes and is a lot less expensive — just $4 each way. If you get the right narrator, not only will they point out the sights along the way, they’ll also do their best to entertain you with ad lib comedy.

Arriving pierside at Marina Village, I decided to walk the few blocks to Atlantis and take in the tropical pastel-colored buildings that housed upscale shops and a variety of restaurants — everything from inexpensive to gourmet — that lined cobblestone pathways dotted with palms and flowering plants.

To keep everything running smoothly, the resort operates with a whopping 7,500 employees. They’re needed to staff the hotels, the casino, the beautifully landscaped gardens and the 20 restaurants, not to mention the 141-acre Aquaventure, a mega-complex of water slides and river rides.

My main interest was purchasing a one-day pass which gave me entry to Aquaventure and Dolphin Cay, one of the largest and most sophisticated marine-mammal habitats in the world. With the pass, visitors can explore the wonders of the Cay from an observation deck, but if you want to swim, kayak, paddleboard or snorkel with the sea creatures there’s an extra charge.

I picked up my pass at the Atlantis Adventures Tour Center located just outside the Coral Tower. Keep in mind the passes are limited and available only on Tuesday, Wednesday and Thursday, so it’s best to reserve ahead.

As I started off to explore the water slides, I couldn’t help noticing the bridge on the 17th floor that connects the two towers of the Royal Complex. After a little digging around, I discovered the bridge is actually an entire suite that comes with 10 rooms, including a 1,250-square-foot living room, a dining area with a 22-carat gold chandelier, and seven butlers and attendants.

The suite is rumored to have been one of Michael Jackson’s favorite places to stay, but at $25,000 a night (it’s reported to be the world’s most expensive hotel suite), who else could afford it?

Entering the Royal Towers lobby, aka the Great Hall of Waters, I was immediately drawn to the Digs, built to simulate the tunnels and thoroughfares of the lost continent. Big glass windows give up close looks at venomous Indo-Pacific Ocean lionfish, iridescent jellyfish, and six-foot Moray eels.

Back outside, I wandered over the grounds soaking in the beauty of the landscaped gardens, fountains with sculptures of flying fish and a total of 11 swimming pools.

The physical, as opposed to the visual, adventures start with the river rides and water slides. The Mayan Temple has got to be one of the most architecturally interesting water slides on the planet. Built in the form of a Mesoamerican, pre-Columbian pyramid, the structure features the Leap of Faith, a body slide with a 60-foot near vertical drop, that takes you through an acrylic tunnel submerged in a lagoon filled with amazing marine life. Its sister slide, the Challenger, has two tracks that allow riders to race against a friend or foe to see which one gets to the bottom first.

On the way to the Powerhouse, I walked on a bridge that crosses above the Current, a river ride along a wild, mile-long waterway in inner tubes via water escalators, rolling waves and extreme rapids powered by master blaster technology. A gentler, quarter-mile long Lazy River Ride is an alternative for younger and less adventurous souls.

The 120-foot-tall Power Tower holds the Abyss, which begins with a staggering 50-foot, near-vertical drop through complete darkness. The 200-foot-long body slide ends with a splash through waterfalls and into the Cenote — an underground lair of prehistoric fish.

Other options include the Surge, an inner tube ride with a camel back drop into a cavern, that quickly twists and turns downwards into the white-water rapids, and the Drop, a single or double inner-tube ride that begins with an ominous “drop” through darkness in an enclosed tube.

After a full day of water adventures, you might want to walk the nearby Sir Sidney Poitier Bridge that connects Paradise Island with Nassau. Built in 2015, the bridge arcs high over the ocean and affords great photo ops of Atlantis and the town of Nassau. The walkway is safe, exhilarating and free of charge.