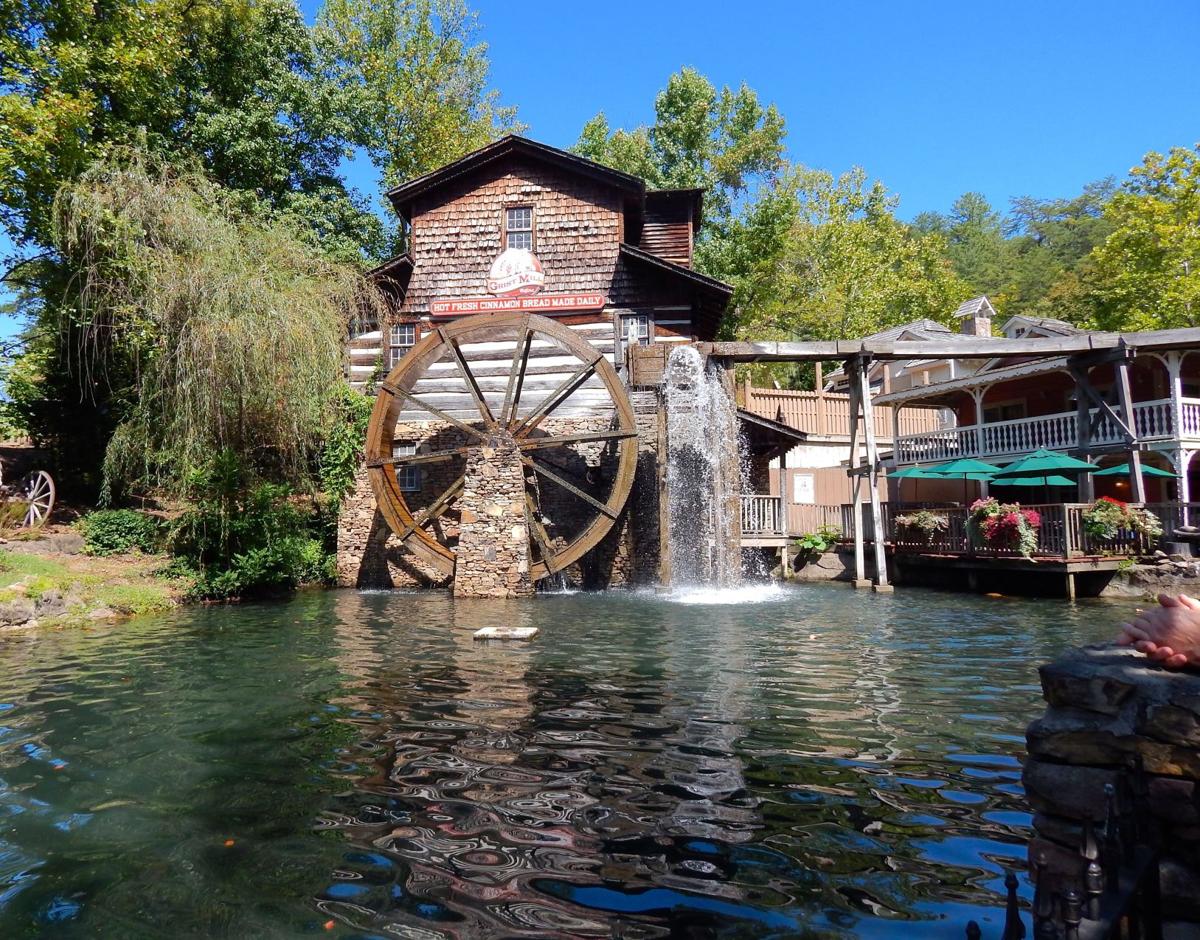 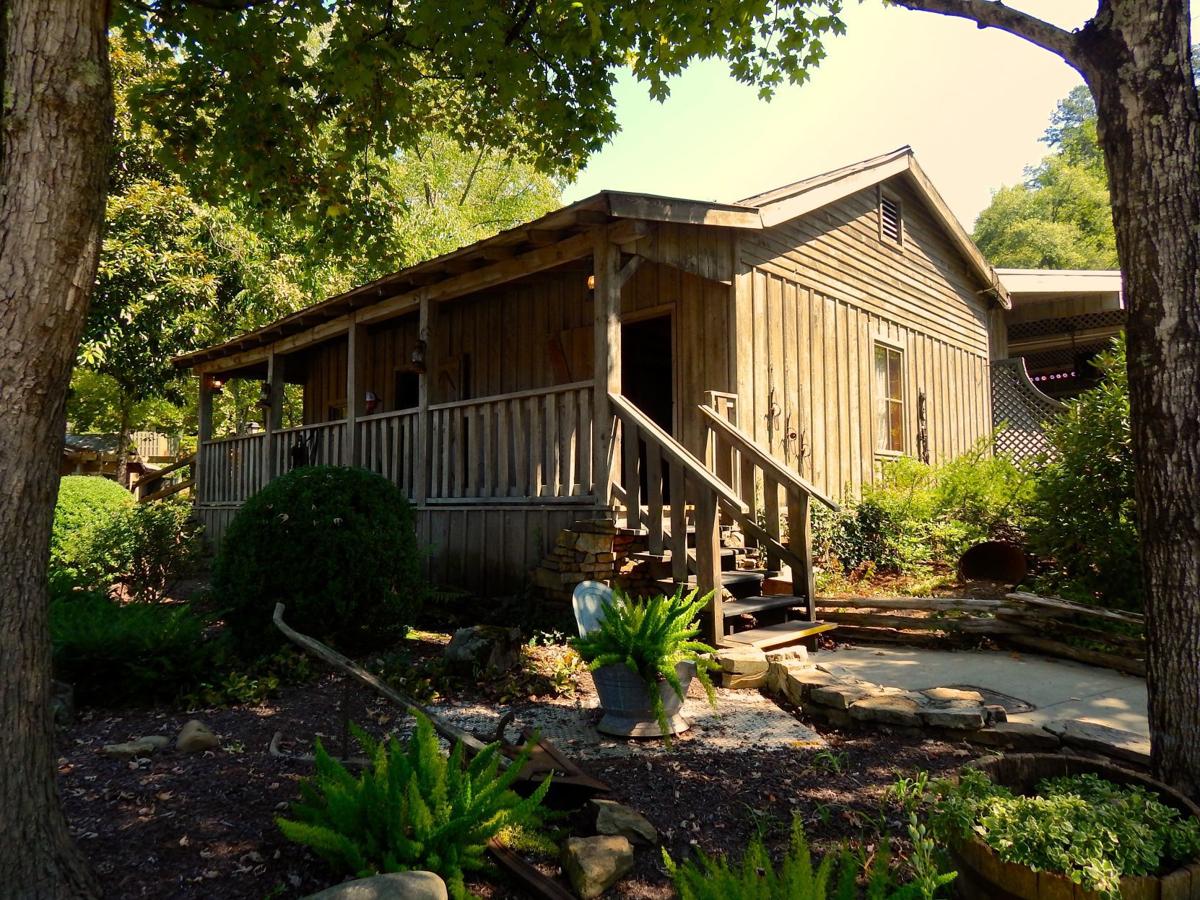 Dolly’s Cabin is a replica of the family cabin in which she grew up, built by her brother and decorated by her mother with lots of items from the original. 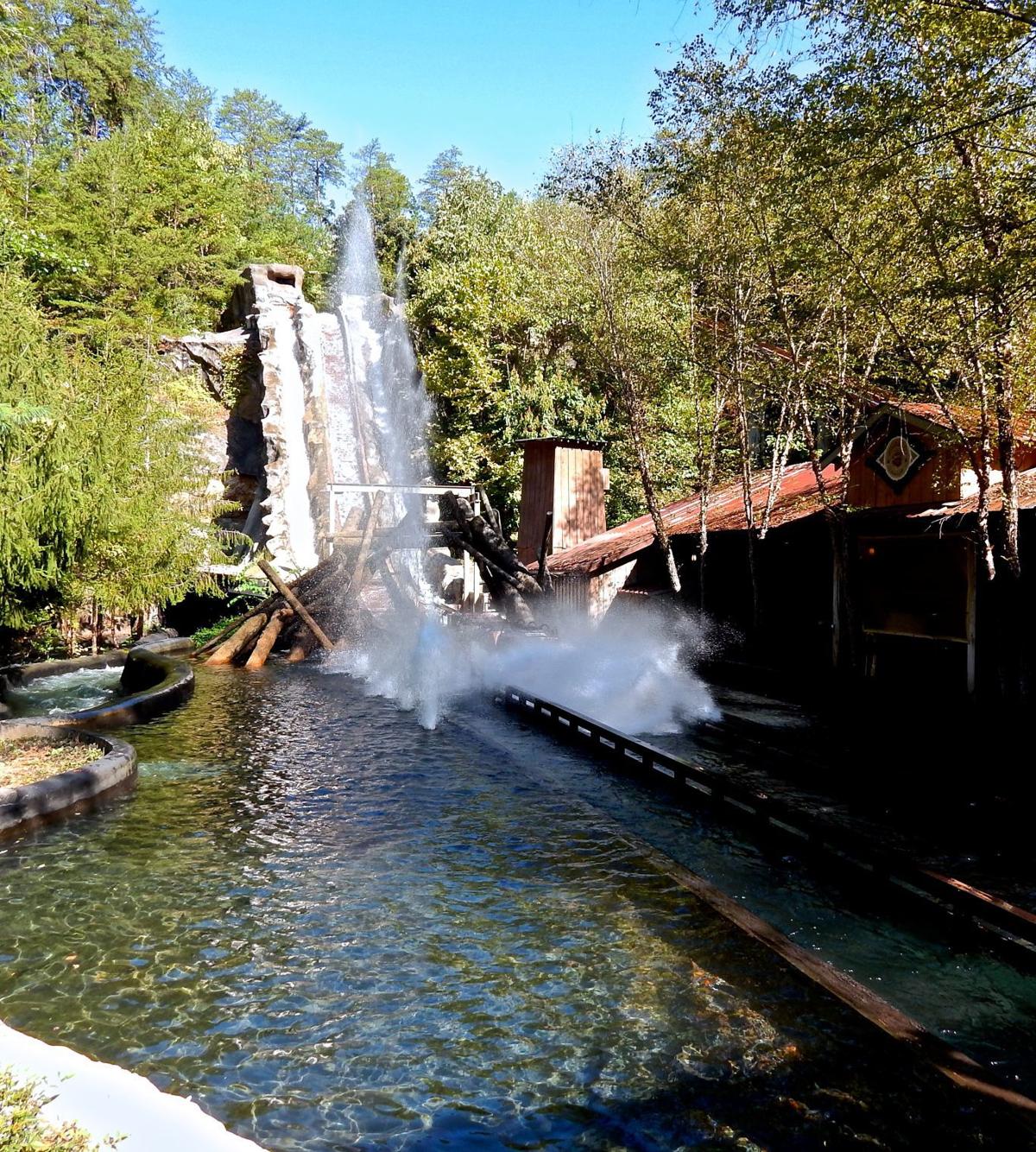 When you needed to cool off at Dollywood Theme Park, take the Daredevil Falls ride. 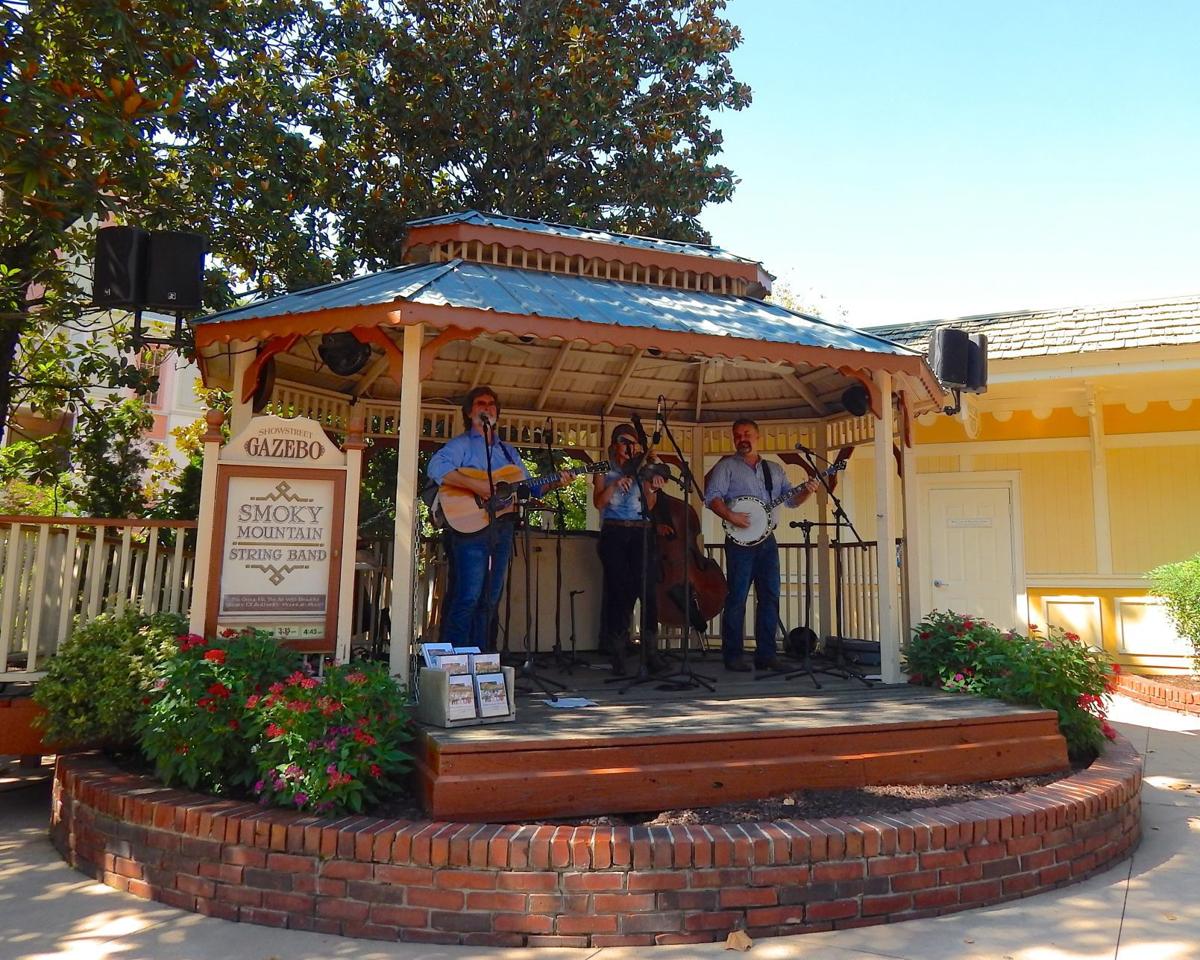 Smoky Mountain String Band plays throughout the day in one of the several outdoor music venues at Dollywood. 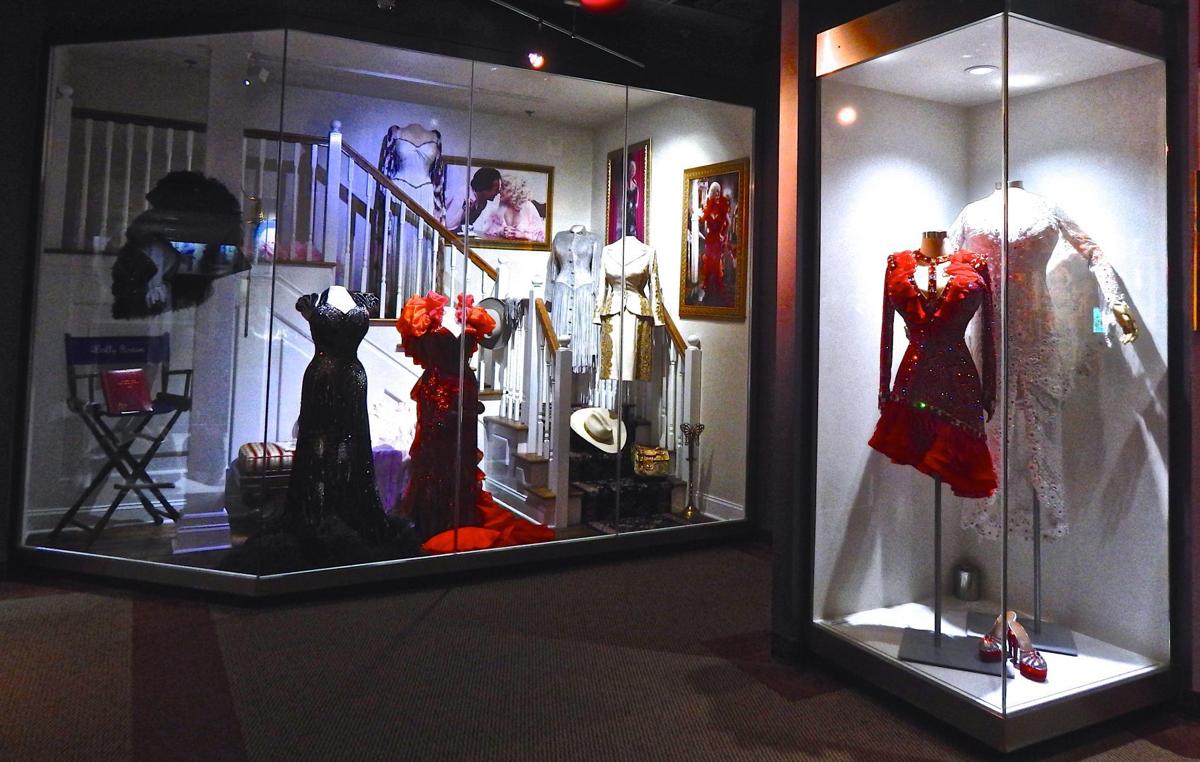 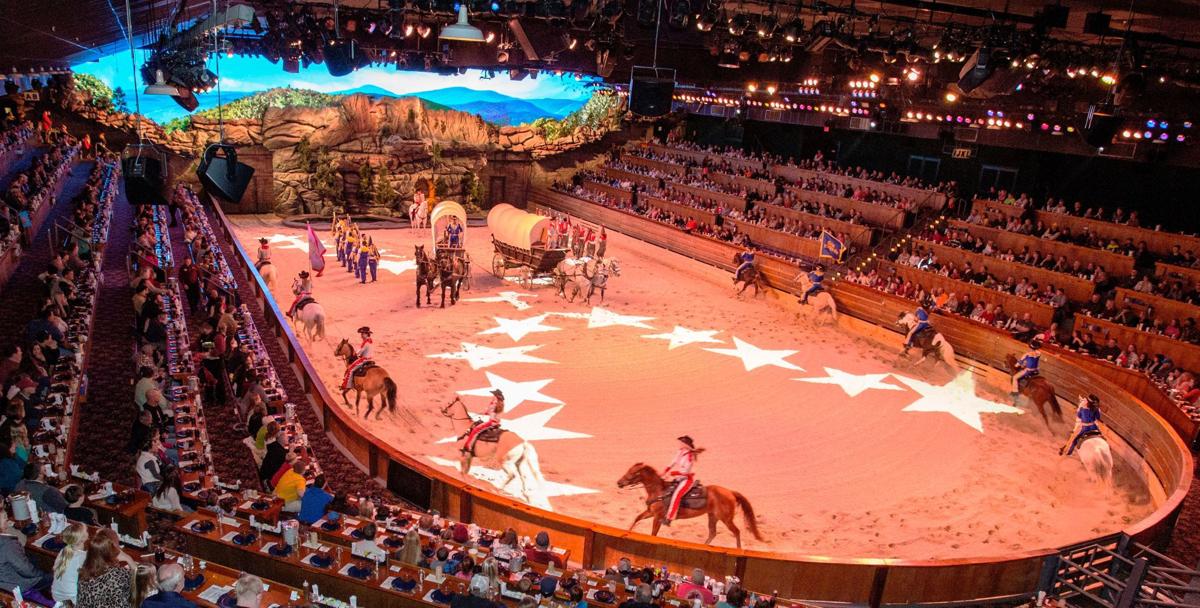 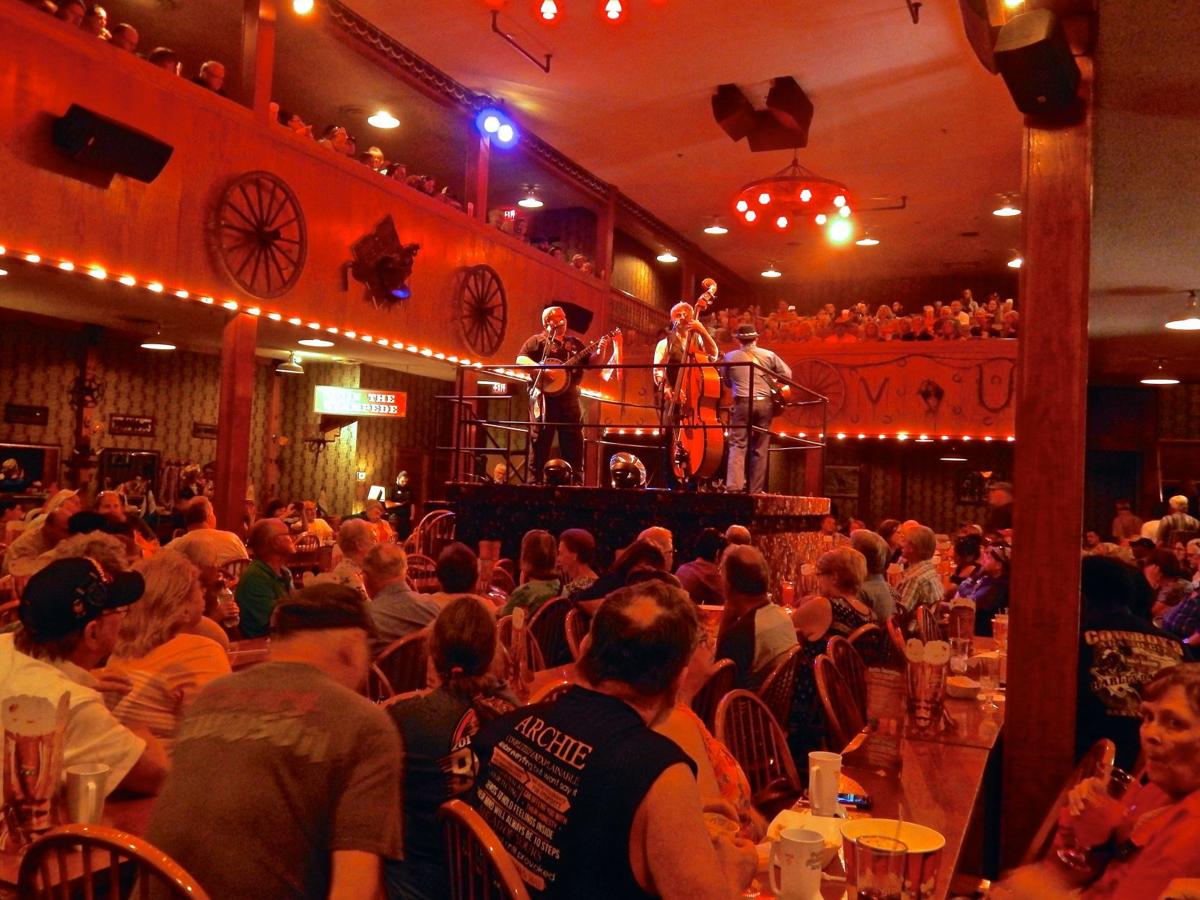 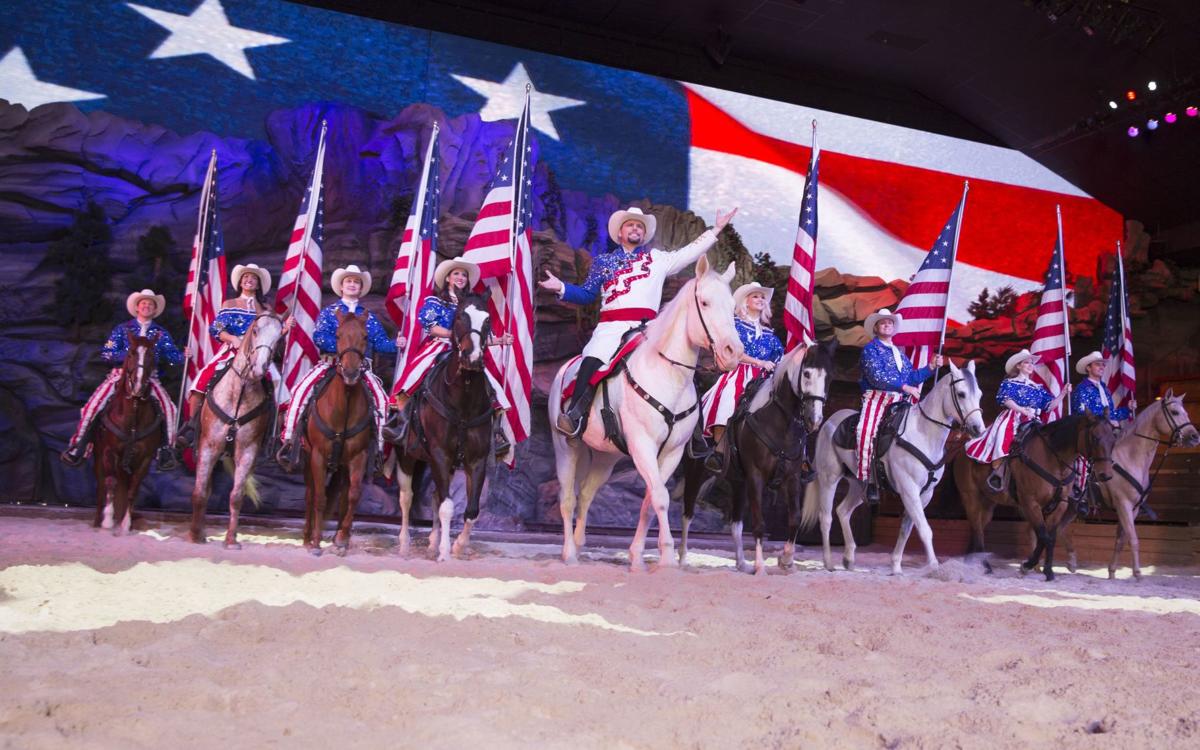 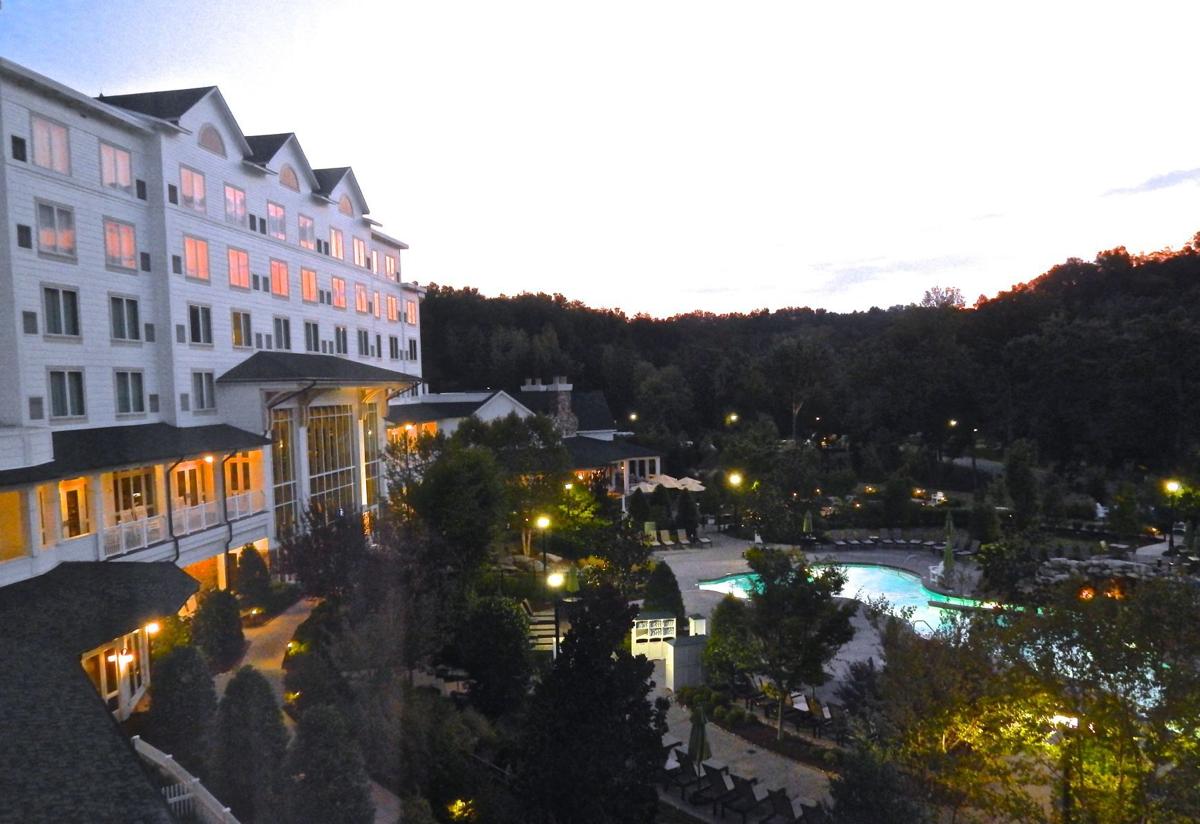 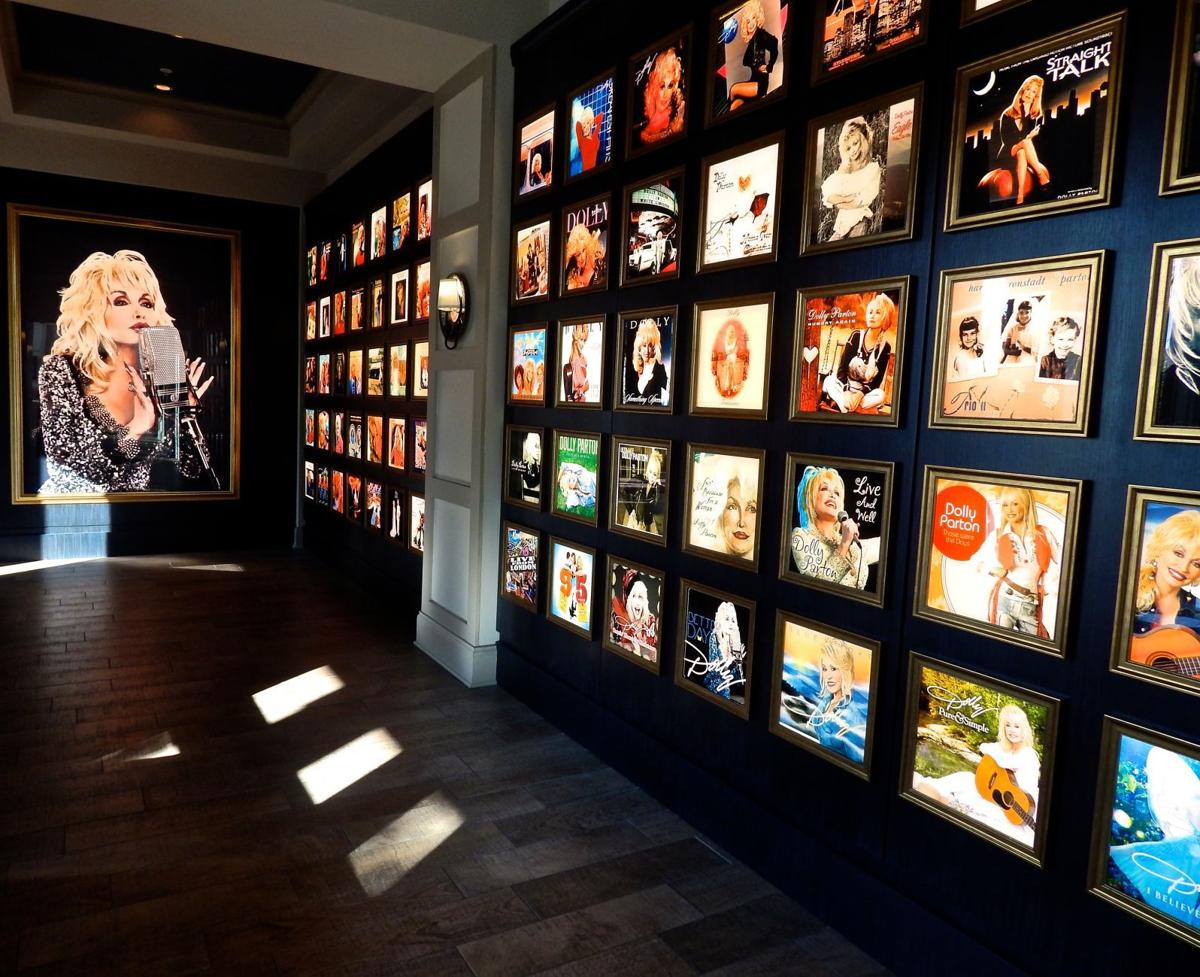 Dolly is everywhere at her DreamMore Resort Hotel and Spa. 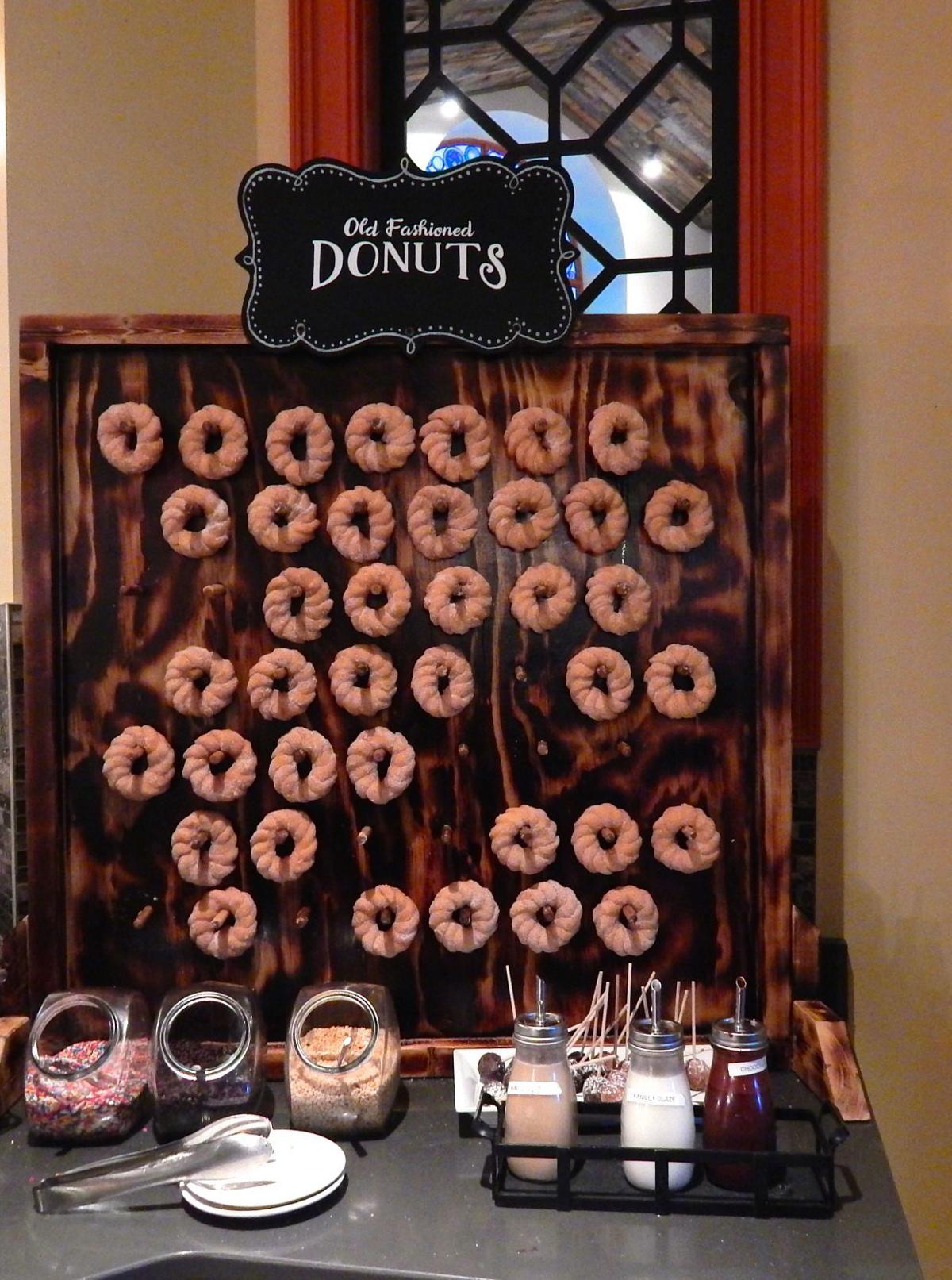 Our favorite food delivery at Resort’s Song and Hearth dining room was the doughnut wall, where you could slip a doughnut or two off the pegs day and night. 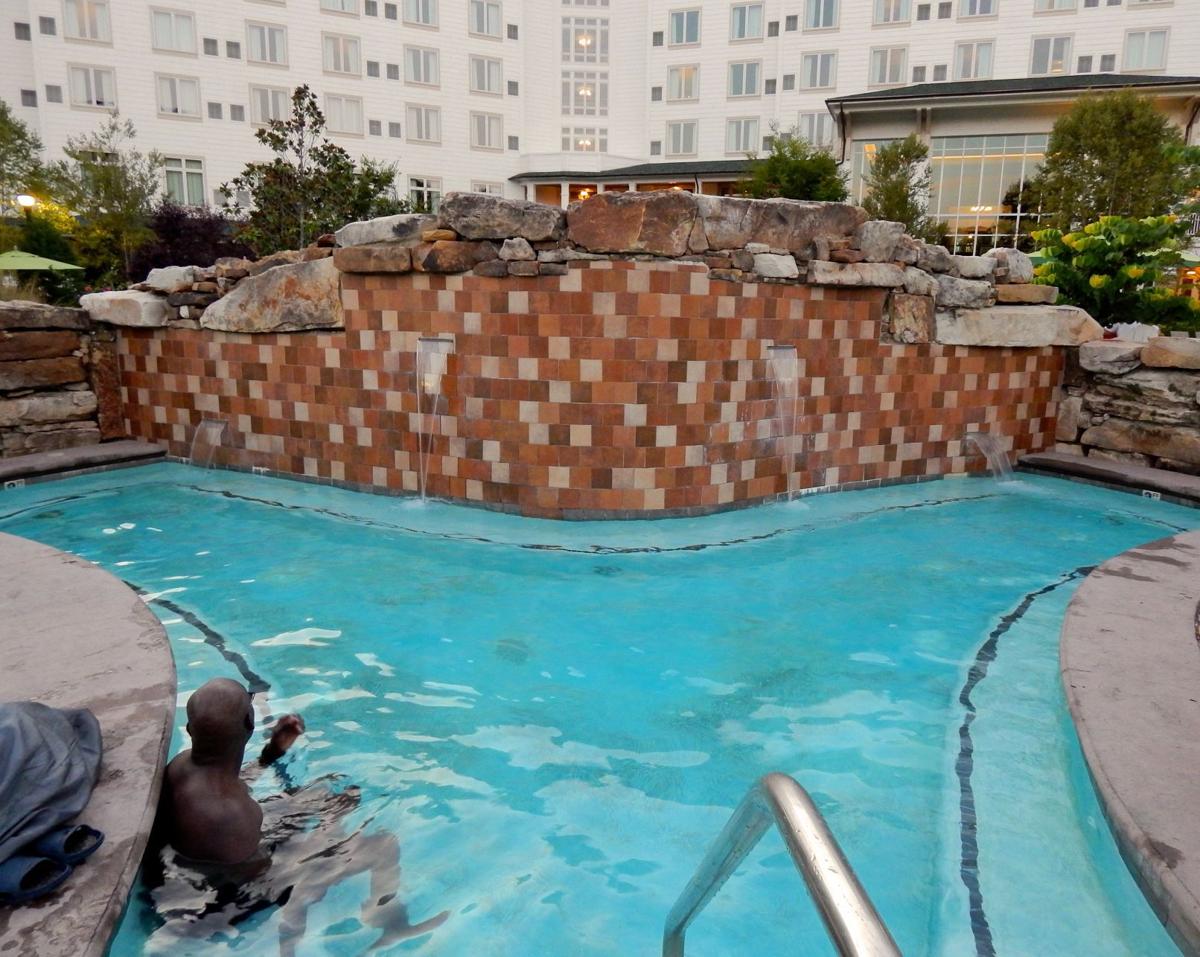 Hot tub in the outdoor pool complex at the DreamMore Resort Hotel. 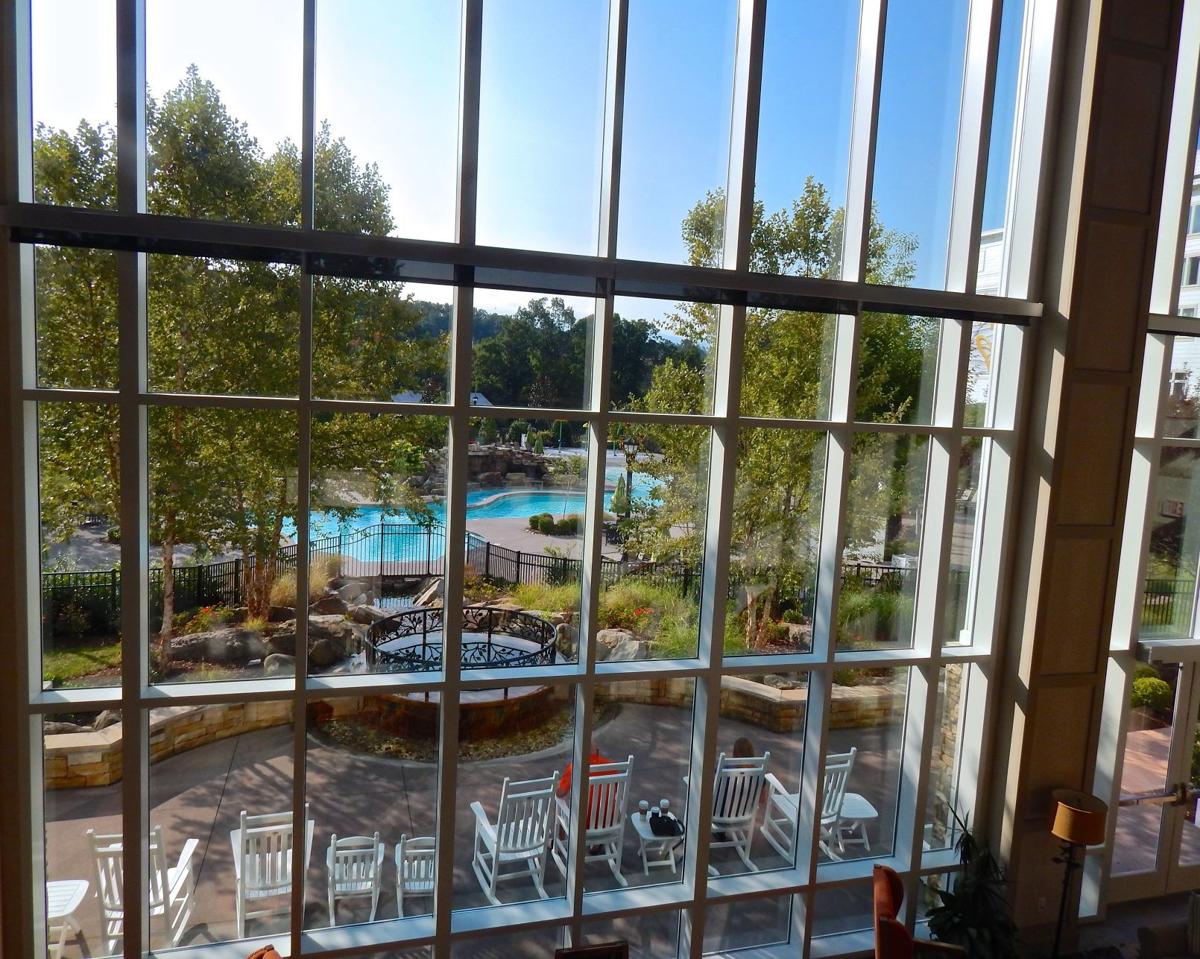 Dolly’s Cabin is a replica of the family cabin in which she grew up, built by her brother and decorated by her mother with lots of items from the original.

When you needed to cool off at Dollywood Theme Park, take the Daredevil Falls ride.

Smoky Mountain String Band plays throughout the day in one of the several outdoor music venues at Dollywood.

Dolly is everywhere at her DreamMore Resort Hotel and Spa.

Our favorite food delivery at Resort’s Song and Hearth dining room was the doughnut wall, where you could slip a doughnut or two off the pegs day and night.

Hot tub in the outdoor pool complex at the DreamMore Resort Hotel.

It’s a universe of its own where the anthem seems to be “We LOVE Dolly!” The Dolly being Dolly Parton, of course.

Located in the Smoky Mountains of Pigeon Forge, Tennesse, Dollywood is just under a five-hour drive from Charleston. Named for country singer Dolly Parton, the region’s most famous celebrity, the Dollywood theme park is centerpiece of the Dolly experience. Its award-winning prowess has a long list for entertainment, best food and best park.

Dollywood has won best Christmas awards every year since 2008 and is a nine-year winner for best shows. The adjacent 35-acre Splash Park is also an award-winner open only in summer.

Like its famous namesake, Dollywood is bigger than life — 150 acres with more than a million artifacts scattered around and 139 attractions, dining and shopping stops listed on the park map.

And yet, the feeling is intimate.

Among the nearly 40 rides are several world-renown coasters arranged so they do not dominate the park. That honor goes to the music. We enjoyed the perfectly choreographed and sung Dreamland Drive-In, an indoor show of exuberant young people and a live band devoted to music of the ‘50s and ‘60s; the Smoky Mountain String Band playing on an outdoor patio; and more ‘50s singing and dancing outside Dolly’s Closet.

Among the 2.5 million visitors each year are many who return again and again. “I come for the shows. I love the shows,” one return visitor told us. Another person volunteered: “I saw Trace Adkins here.” The best part may be that once you pay admission to the park, all the rides and shows and attractions are free. Only food and shopping require additional spending.

We rode the steam train, which remains from the first park on this site in 1961, before Dolly got involved in 1986. The Chasing Rainbows Museum is full-immersion Dolly, with walls of photos, awards and costumes all a-glitter; videos, including her debut on Porter Wagoner; even a holographic Dolly welcome.

Eating establishments and entertainment are all park-owned. Most of the shops are too, making it easier to maintain high standards. We made certain to get a bag of the touted cinnamon bread at the Grist Mill, well worth their fame.

Dollywood is a Southern resort with an almost startling lack of diversity but no feeling of exclusion. The culture is friendly, family-focused and safe, helped by the fact that park workers are almost all local folks. No weapons are allowed in the park; all bags are searched at the entrance. When I asked if anyone pushed back I was assured, “No. Dolly wouldn’t be happy.”

Children are everywhere and sincere attention is paid to them and their needs, including a place just inside the entrance where they can get measured so they know whether they can go on a ride or not. In the bathrooms, there are child-scaled hand washing sinks only a foot off the floor. Dollywood’s newest “neighborhood” is Wildwood Grove with everything especially aimed at kids.

Before we continue with our adventures at the resort and the Stampede, it’s important for understanding the magnetism of the place to know the backstory to the Dollywood universe in Pigeon Forge, Tennessee.

“People really love Dolly,” said Jennifer Webb, the Dollywood DreamMore Resort publicist with whom I worked. We heard that refrain repeatedly from guests to staff. It’s not surprising. How can anyone not love Dolly Parton?

An incredibly successful musician and performer who rose from nothing, Dolly is committed to giving back and help. Pigeon Forge is her town, her area. She wanted to bring jobs, and the Dollywood universe is now the largest employer in the county, taking advantage of the nearby Smoky Mountains National Park, most visited in the country, and free. Once there, visitors look for things to do.

Dolly is “dreamer-in-chief,” and all parts of the Dollywood universe work to embody this. “Dolly loves everybody” Webb said. “She is so kind.”

The brand is friendly, loving and patient. Staff gets some training but it seems that the Dolly spirit simply infuses everyone. People are not visitors but guests.

“We want them to feel like family and create memories,” said Webb. Everything is affordable and not intimidating.

Dolly’s philanthropy is legendary, exemplified by her response to the devastating 2016 Gatlinburg fires. She established the My People Fund using money from a telethon and her own foundation. More than 875 people received $1,000 monthly checks for a six-month period with a $5,000 final check. A study of results a year later indicated it provided the right money at the right time.

We stayed at the 2015 Dollywood’s DreamMore Resort and Spa, where Dolly’s philosophy of personal empowerment decorates walls throughout the building including the elevators. Several times a day, I was exhorted to “Learn More!” as I rode up and down. One of the perks of staying at the resort was buses that took us back and forth to the theme park, a welcome alternative to navigating the acres of parking so extensive they have their own trams shuttling folks from car to park.

We enjoyed a comfortable room with a built-in bunk bed area where kids could stay, an indoor pool and spa and an outdoor pool complex. There are covered areas with plenty of rocking chairs between the hotel and pool and a very low-key lounge.

Our Southern buffet included fried chicken and a full turkey dinner with dressing, gravy and real mashed potatoes. My husband, Jack, liked the salad and salmon. We both enjoyed the long table of desserts with an excellent blueberry cobbler and bowls of real whipped cream you could put on everything. As part of the family-friendly attitude, children under three ate free and those up to 12 had a lower price than adults.

We chose Dolly Parton’s Stampede as our off-site but related entertainment show, now in its 32nd season. It started with a pre-show concert at the nonalcoholic saloon that seated 1,100 as does the 35,000-square-foot arena where the main show is staged.

We moved into the arena for a sold-out show, sitting on benches behind long tables. During the summer season, four shows a day is the norm with as many as five during the holidays.

The show had buffalo; an Indian segment with flying, fluorescent costumed Indians; longhorn cattle and cowboys; trick riders; square dancing on horseback; and even racing pigs, comedy and magic. Jack was mystified by the disappearing girl trick.

“I want to know how they did that with the girl,” he said.

Throughout the show, audience participated with yelling, clapping, stamping feet and an arbitrary division into North and South on either side of the arena. The finale was breathtaking and patriotic, with riders carrying American flags and wearing lighted costumes. Everyone seemed to be enjoying themselves. We never overheard any complaints.

Dinner was integrated into the show. Settlers circled their wagons and set up suppertime on the arena floor. Servers moved quickly in the seating area dropping a whole chicken, pork loin, half a baked potato, corn on the cob and biscuits onto every plate, finishing up with apple dumplings for dessert. About four years ago, eating utensils were introduced since vegetarian meals required them. I was happy to have a fork and knife.

While most folks drive to Dollywood, the nearest commercial airport is Knoxville. We flew our plane into the nearby Gatlinburg/Pigeon Forge airport where the resort picks up private aviation passengers. All in all, Dollywood was a five-star bucket list adventure with a big heart.

Jeanne Mozier, of Berkeley Springs, is the author of “Way Out in West Virginia,” a guide to the wonders and oddities of the Mountain State. She and noted photographer Steve Shaluta have released the second printing of the coffee-table photo book “West Virginia Beauty, Familiar and Rare.” Both books are available around West Virginia and from WVBookCo.com.