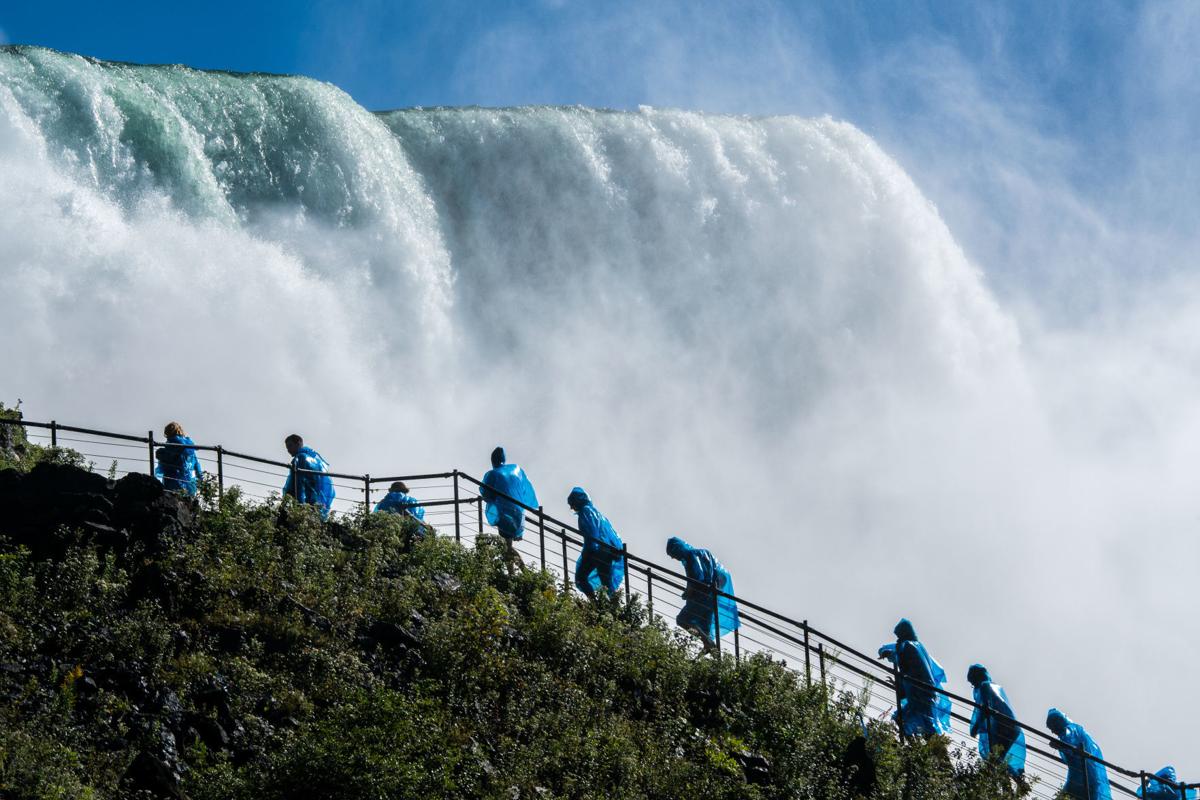 Climbing the staircase to the Crow’s Nest at Niagara Falls. 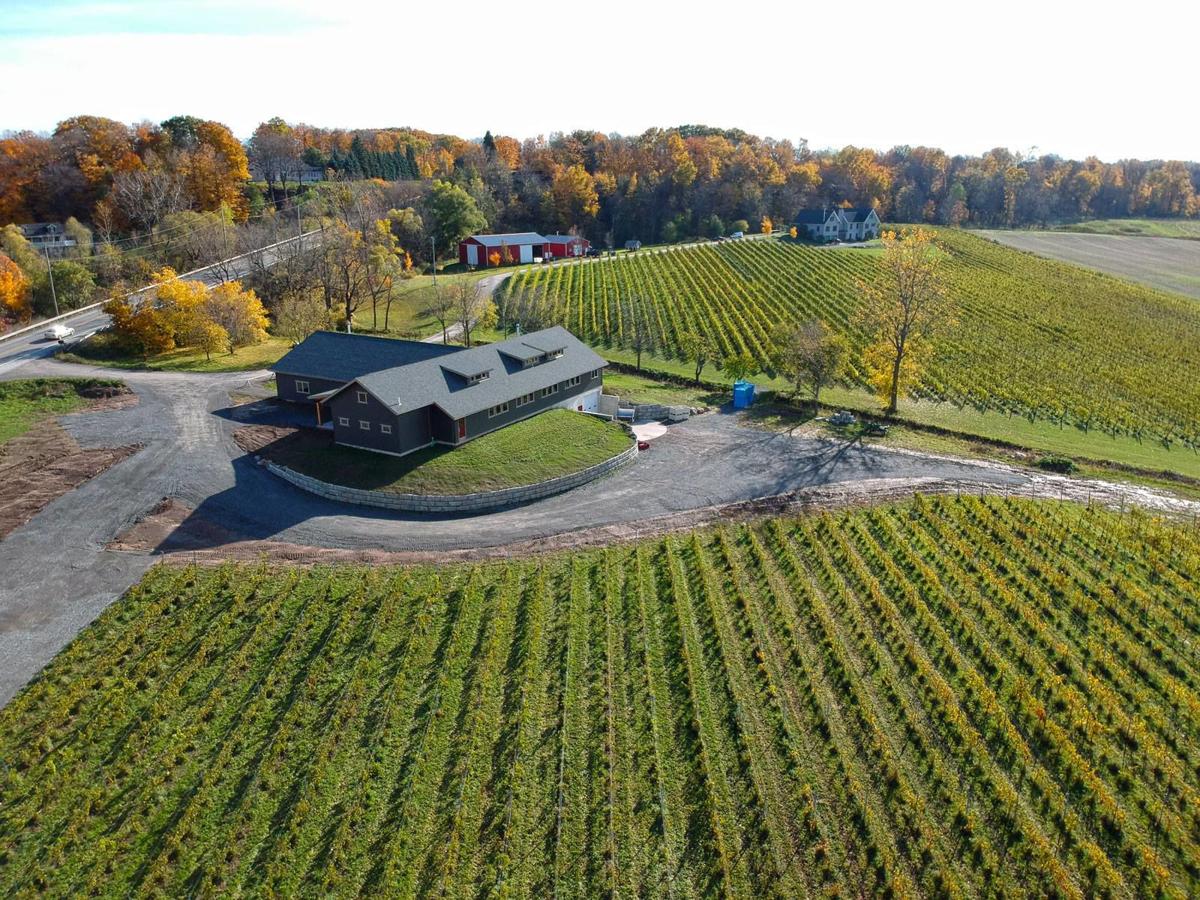 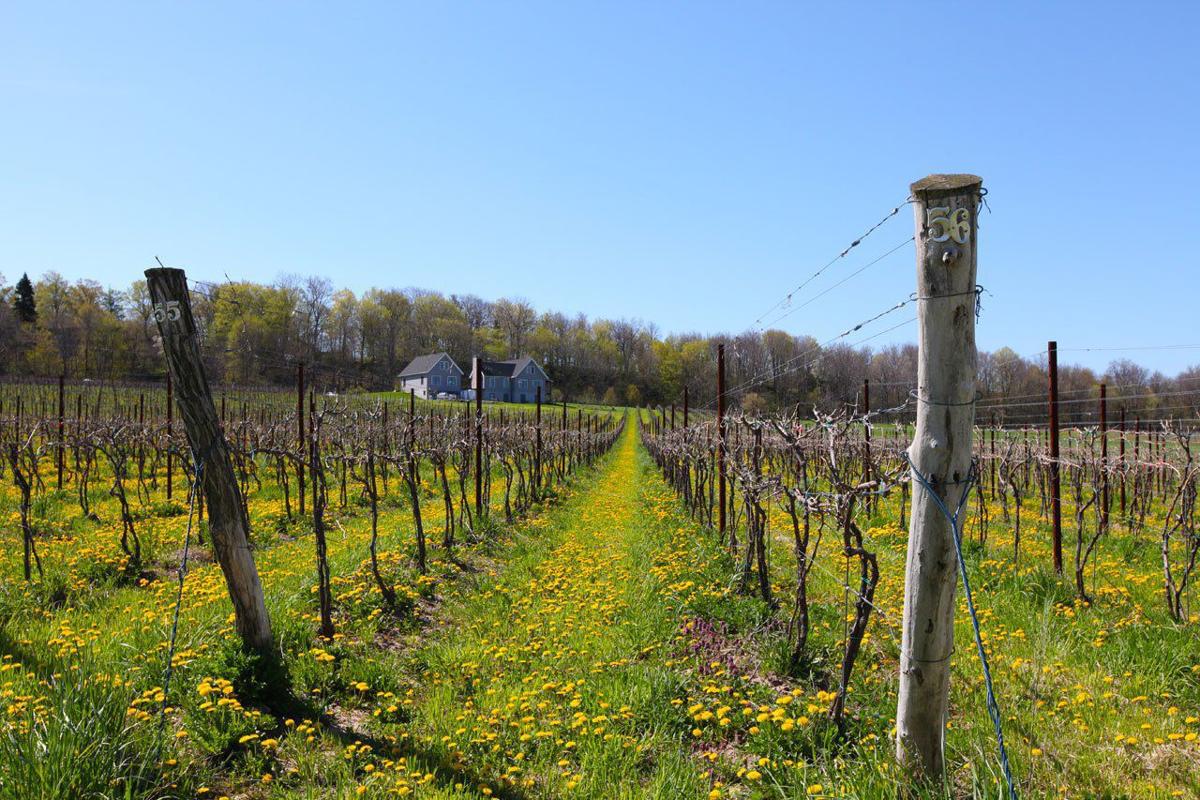 Arrowhead Spring Vineyards, located in Niagara Falls, New York, is beautiful, even when its vines are bare. 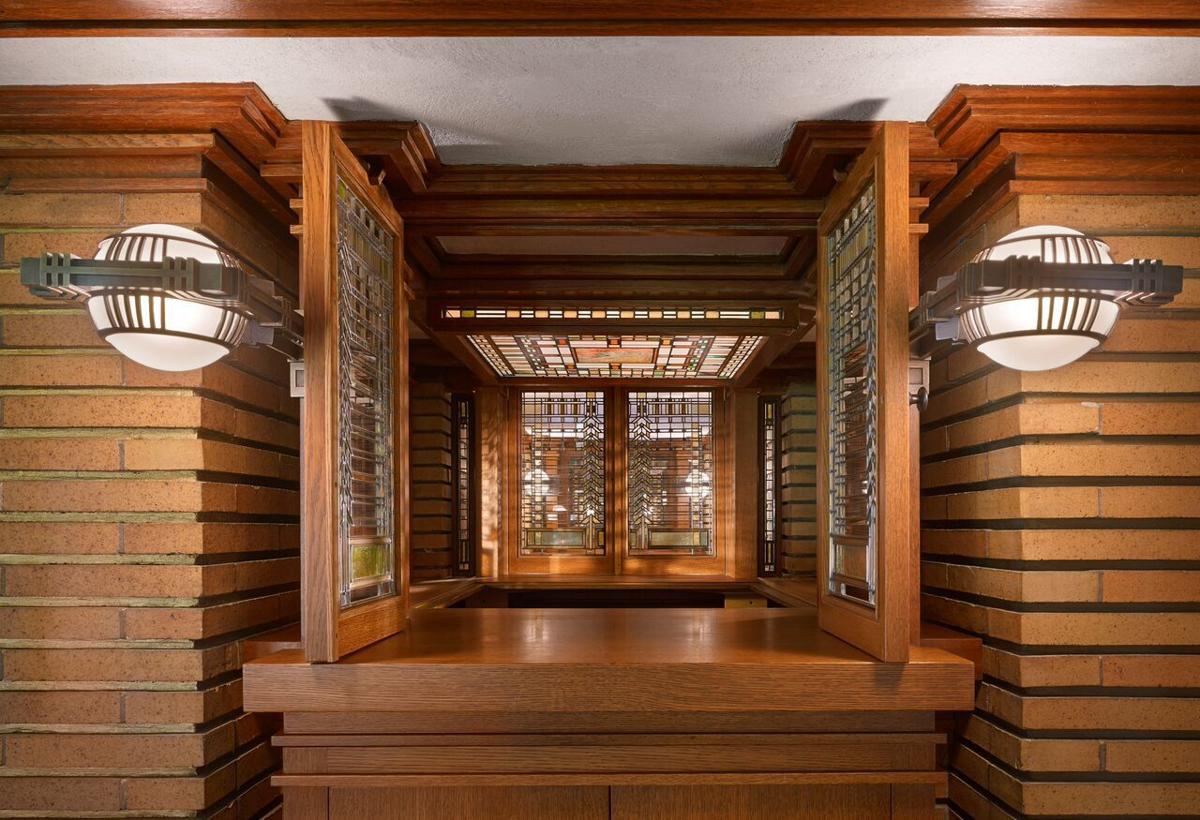 One of the 394 Frank Lloyd Wright-designed panels of art glass at the Martin House. 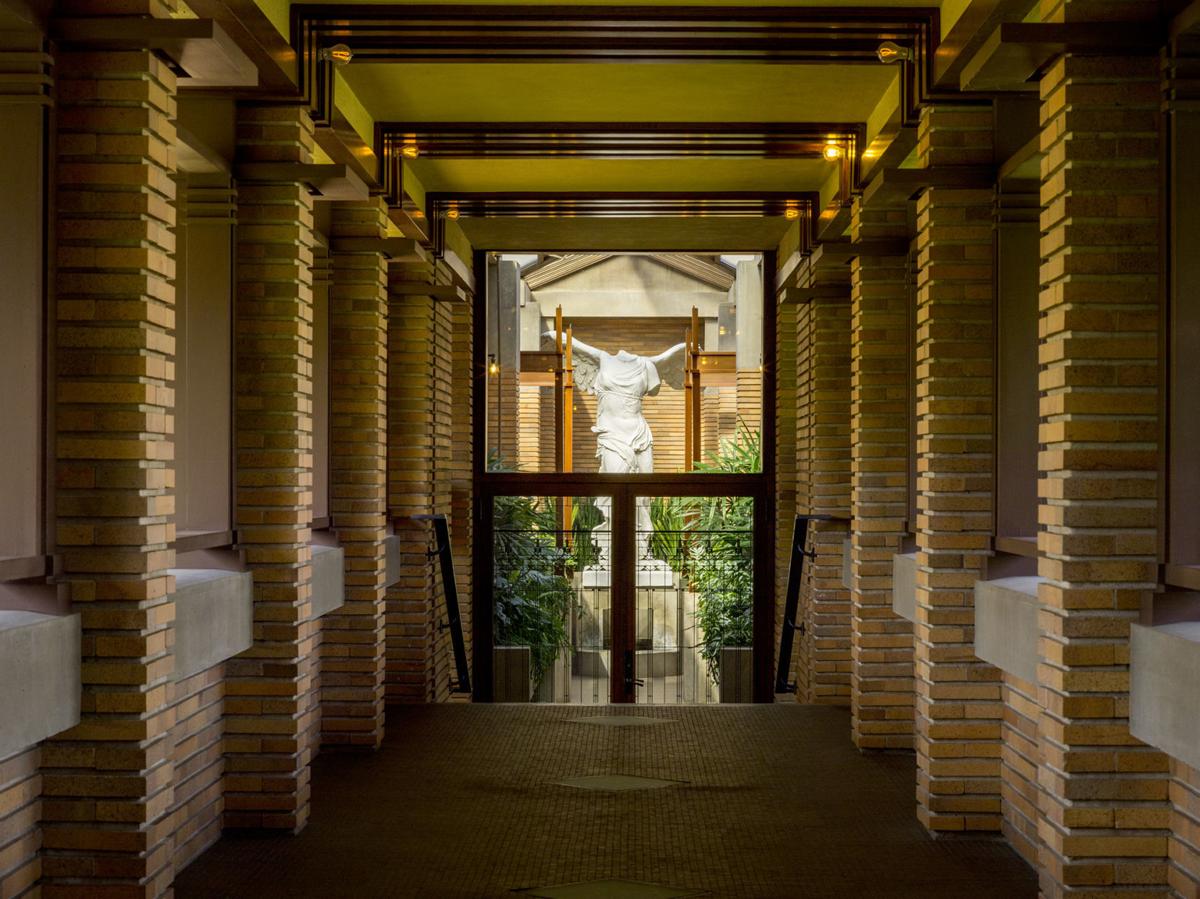 An iconic image of the conservatory at Frank Lloyd Wright’s Martin House.

Climbing the staircase to the Crow’s Nest at Niagara Falls.

Arrowhead Spring Vineyards, located in Niagara Falls, New York, is beautiful, even when its vines are bare.

One of the 394 Frank Lloyd Wright-designed panels of art glass at the Martin House.

An iconic image of the conservatory at Frank Lloyd Wright’s Martin House.

NIAGARA FALLS, N.Y. — I never get tired of seeing the falls, a natural wonder that straddles the United States and Canada. These days, you’ll need a passport to get back and forth across the Canadian border. I didn’t have mine, so this time I stayed on the American side, where I spent a couple of hours wandering the pathways of Niagara Falls State Park in late October.

From Charleston, Niagara Falls is 445 miles away, a little over a seven-hour drive.

The pleasant wooded area abuts the Niagara River, which roils and rolls as it rapidly make its way toward the falls. You can feel the stone of the escarpment quiver under the force of the water’s plunge, feel the clouds of mist that waft up from the bottom and hear the unceasing roar of the cascade.

When the sun hits the mist just right, you might be able to see a large rainbow arching its way over the gorge, a common occurrence, I’ve heard.

From Prospect Park, I took a bridge over to an observation tower with a large outdoor deck. The scenery around the overhang is quite spectacular, with the Rainbow Bridge in one direction and the falls in the other. An elevator in the tower takes you down to the river’s edge, where you can pick up a trail that involves some climbing up steep staircases. They lead to the Crow’s Nest, a point right on the edge of the falls just a few feet away and almost close enough to reach out and touch.

At one time, the beauty of the falls had been threatened by industrialists who built factories along the river to harness its energy. In the late 1860s, a group of preservationists stepped in to save the beauty and integrity of the falls. When Niagara Falls State Park was created by the New York legislature in 1885, it became the nation’s first state park.

These days, tourism has trumped manufacturing, and there are loads of businesses and sites that cater to the traveling public. One estimate pegs visitation at 30 million people per year, but I’ve seen others that cite a much lower figure.

There are plenty of ways to enjoy a falls adventure. Outfits like Maid of the Mist take you close to the falls by boat, and there are helicopter tours, biking tours, hiking tours and jet boat rides up to a huge whirlpool in the Niagara River. You can even go behind the falls for a unique look around.

The next time — or the first time — you visit Niagara Falls, you might also want to take a day or two to explore one of New York’s fastest wine growing regions. Home to more than 20 wineries, the region is minutes from the falls and blessed by a genial microclimate and soil conditions that create favorable conditions for wine grape growing.

During a late fall visit, I introduced myself to four of the region’s winemakers and winery owners at a stellar five-course dinner with carefully chosen wines matched to each course. The site was the beautiful Arrowhead Spring Vineyards tasting room, softly lit at sundown with glowing candles and a view that overlooked the vineyards, stunning in their crepuscular glow.

The meal ended with a pumpkin crepe with Arrowhead’s ice wine, a sweet dessert wine famously produced on both sides of the U.S. and Canadian border. Extra tastings included a cabernet franc and port dessert wine, which underscored the region’s array of wine varietals.

The wineries are open year-round, and a good way to go is by purchasing a Winter Wine Pass for $25, which allows two people to sample three wines at 18 wineries. Arrowhead Springs is not included in the pass, but tastings can be purchased on site apart from the pass. A wine trail map can also be downloaded at niagarawinetrail.org/map.

You might also want to check before you go and see what wine dinners and special events the wineries are offering at the time of your planned visit. Make a reservation ahead of time so you’ll be guaranteed a seat.

Just 20 miles to the south, Buffalo can be a pleasant surprise for those who’ve never been there. A repeat visitor, I finally got to see the newly restored Martin House, a Frank Lloyd Wright masterpiece.

This 1.5 acre tract, in the lovely Parkside neighborhood, consists of a complex of six buildings. They include the main, eight-bedroom house designed for Buffalo businessman Darwin D. Martin, a pergola and conservatory, a carriage house and a gardener’s cottage. Also connected is a smaller house Wright built for Martin’s sister and husband, known as the Barton House.

Built in 1903-05, the estate Wright called “a domestic symphony” is considered one of the finest examples of the Prairie House period. The Martin family lived in the house for nearly three decades. It went vacant in 1935 when Darwin Martin died. For 19 years, it stood vacant until an architect bought the property in 1954.

Several owners later, the Martin House Restoration Corporation painstakingly restored the buildings and grounds, which are now a National Historic Landmark. Tours are offered daily and include the landscaped areas around the complex. Reservations are advisable. For information, call 716-856-3858.

Where to eat and sleep

For a place to stay, the Niagara Crossing Hotel & Spa is located on the Niagara River, in the charming town of Lewiston, New York. This boutique hotel has been newly renovated but with the idea of keeping its older ambiance intact. The spa features full day service, and the hotel amenities include Wi-Fi, guest parking and a continental breakfast.

Lewiston played a role in the Underground Railroad. As the final stop on the slave escape route, estimates peg the number of people to cross into freedom just across the river in Canada in the thousands. Niagara Crossing Hotel & Spa, 100 Center St., Lewiston, NY. www.niagaracrossinghotelandspa.com. Phone: 716-754-9070.

For a place to dine, how about Creole and Cajun at Dick and Jenny’s? Jenny, a Grand Island native, met Dick while waitressing in New Orleans. The couple honed their cooking skills in a restaurant they owned together until Hurricane Katrina hit. Deciding to move north after the natural disaster, the couple opened their New Orleans-style restaurant in Jenny’s girlhood stomping ground.