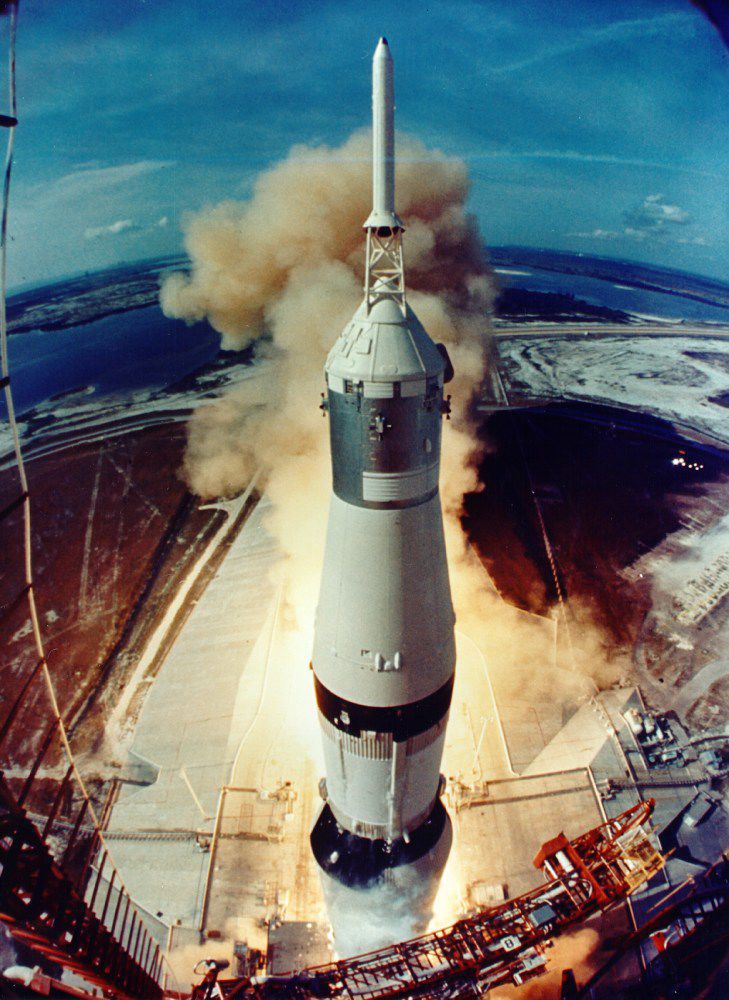 The towering Saturn 5 rocket carrying the Apollo 11 capsule hovers for a moment after its fiery ignition. 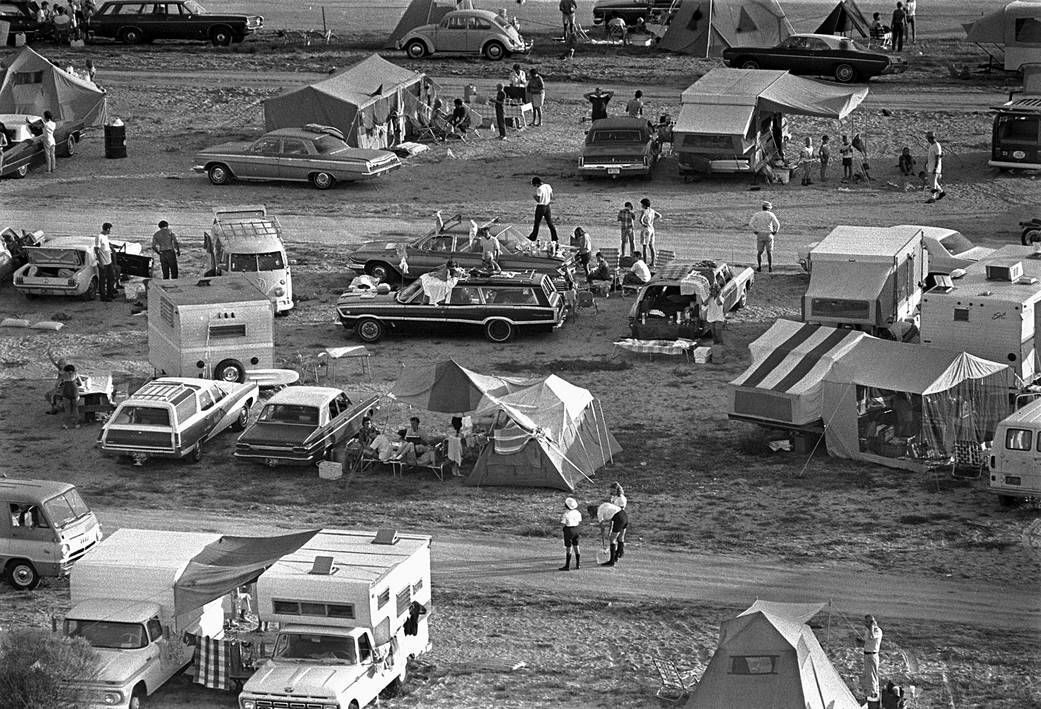 One million spectators gathered in Florida to witness history. More than 400 million people around the world watched on live TV. 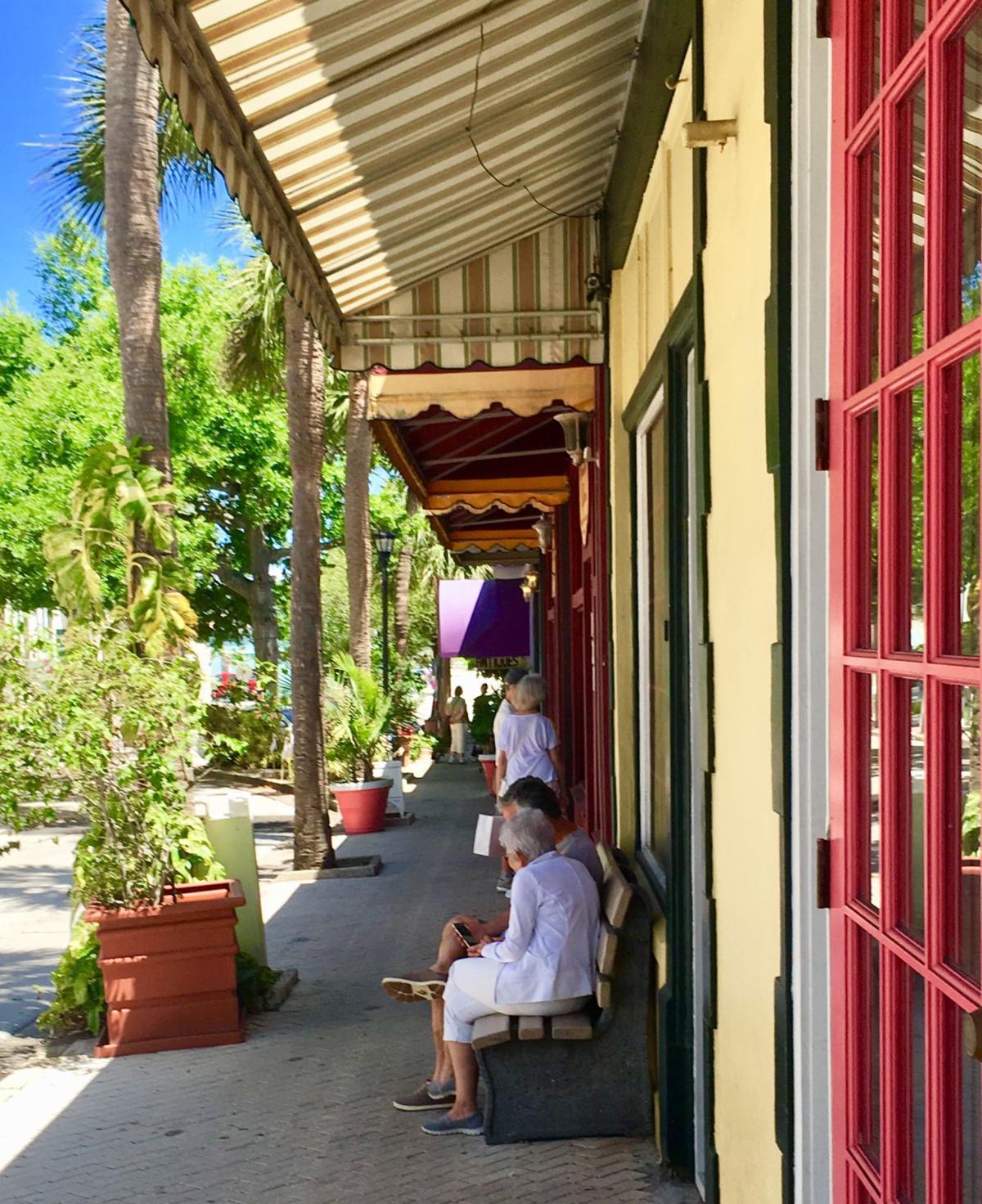 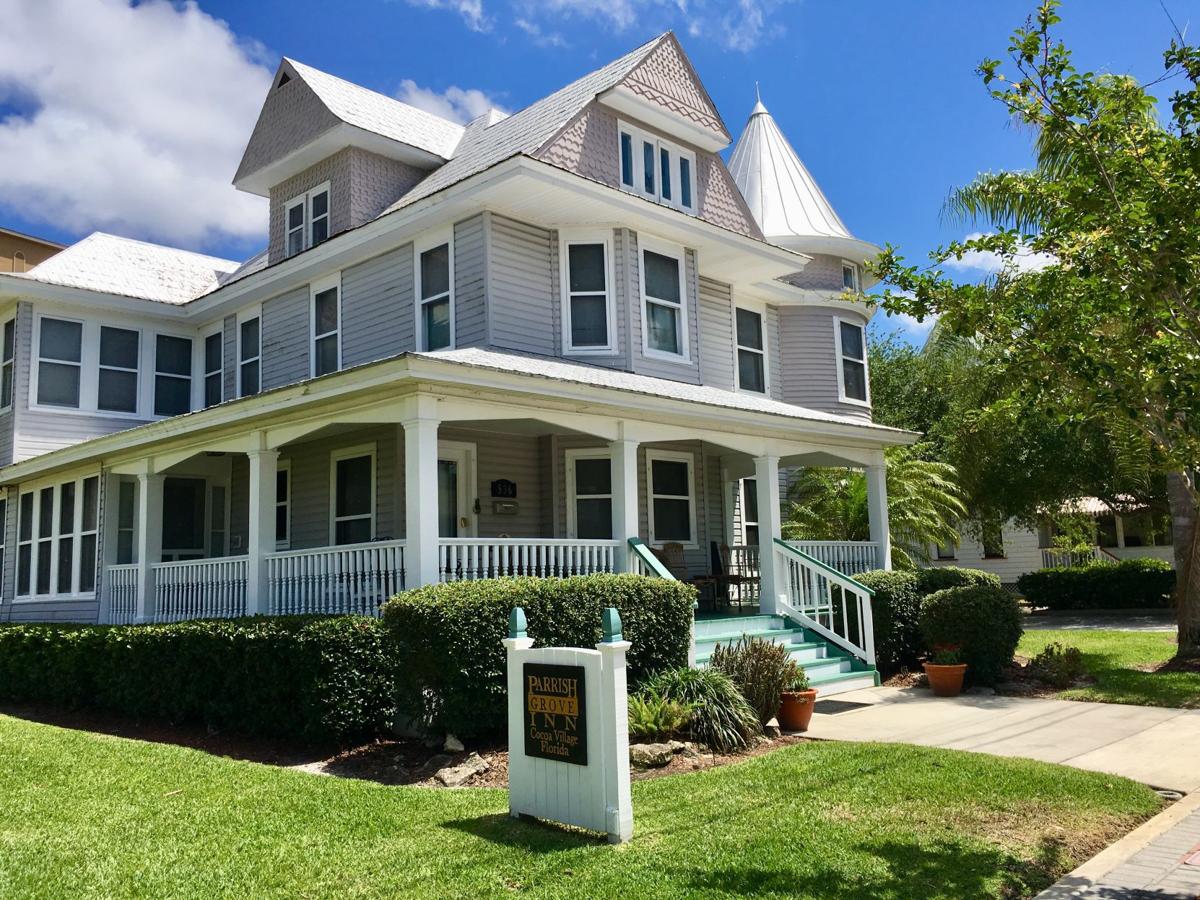 The Parrish Grove Inn in Historic Cocoa Village is ready to roll out the welcome mat for visitors arriving in the area for 50th anniversary celebrations. 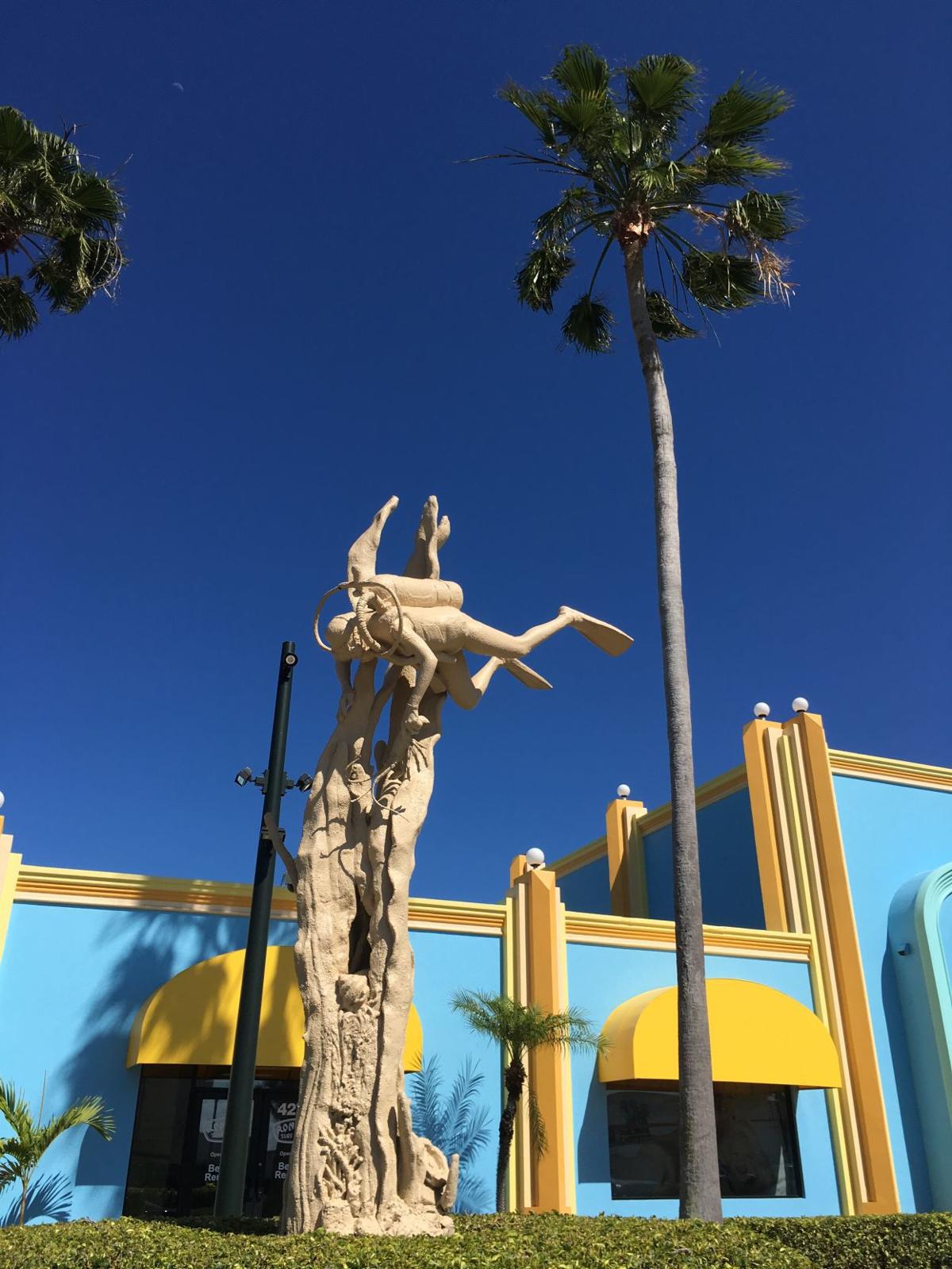 The Ron Jon Surf Shop in Cocoa Beach is ringed with towering sculptures with watersports motifs. 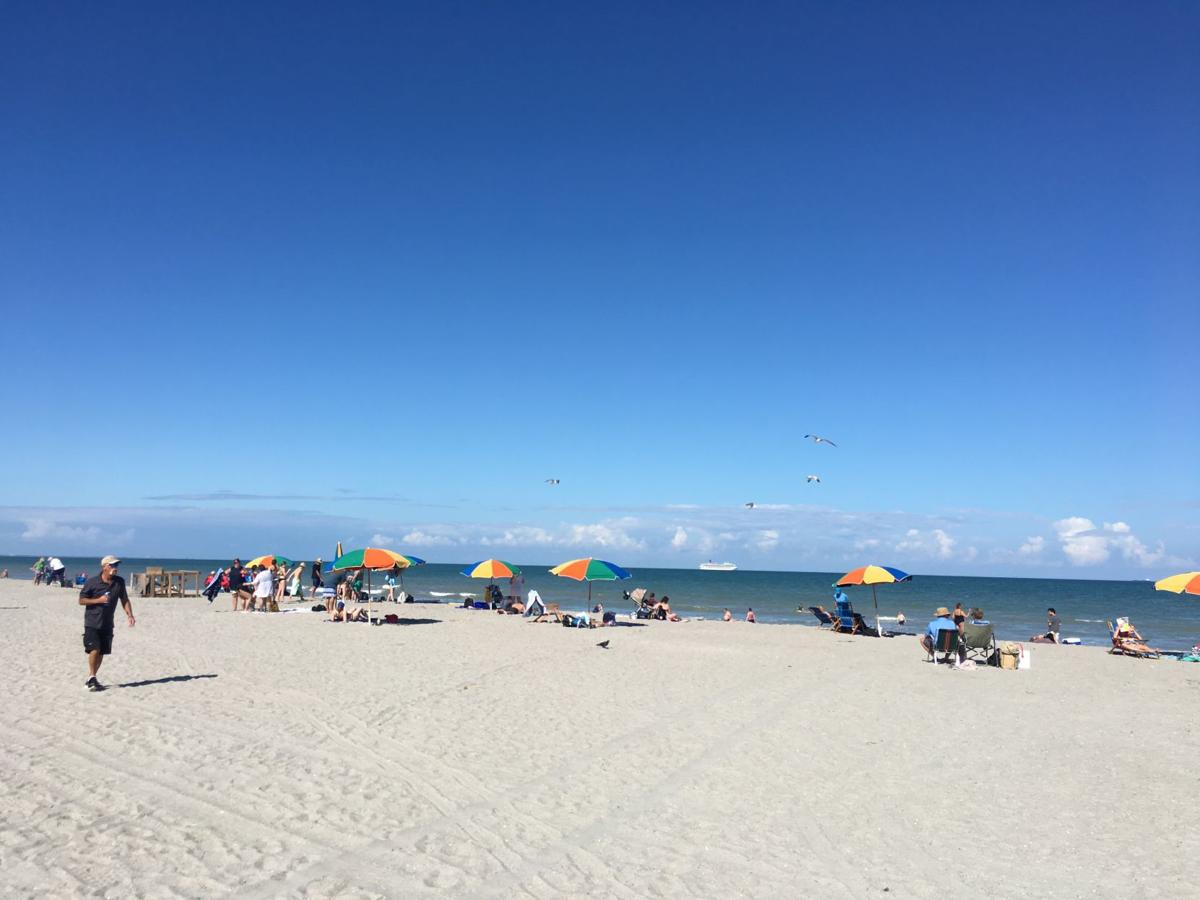 Alan Shepard Park in Cocoa Beach, named for America’s first astronaut, is an ideal place to watch a rocket launch.

The towering Saturn 5 rocket carrying the Apollo 11 capsule hovers for a moment after its fiery ignition.

One million spectators gathered in Florida to witness history. More than 400 million people around the world watched on live TV.

The Parrish Grove Inn in Historic Cocoa Village is ready to roll out the welcome mat for visitors arriving in the area for 50th anniversary celebrations.

The Ron Jon Surf Shop in Cocoa Beach is ringed with towering sculptures with watersports motifs.

Alan Shepard Park in Cocoa Beach, named for America’s first astronaut, is an ideal place to watch a rocket launch.

West Virginians — a few of them, notably — have been fascinated by space exploration since long before that sweltering July day a half century ago when a million people descended on the Space Coast in Central Florida for the second manned moon shot from NASA’s Kennedy Space Center at Cape Canaveral.

It was the first launch where the audacious plan was to land a man on the lunar surface. (It would be another 14 years before the first woman astronaut, Sally Ride, would fly into space.)

Many of the spectators staked out positions on bridges and piers the night before the launch. They filled every hotel room for dozens of miles around. Thousands camped on beaches. Restrooms and other amenities were in short supply, but the crowd was good-humored, remarkable in the summer heat. 400,000,000 people around the world would watch on live TV, an audience of unprecedented size.

They wouldn’t be disappointed. At 9:32 a.m. on July 16, 1969, Apollo 11 lifted off, rising, almost hovering in the first fiery moments after ignition, then accelerating until, a speck in the sky trailing orange flames and a smoky contrail, it disappeared. The spacecraft, astronauts Neil Armstrong, Buzz Aldrin and Michael Collins tightly strapped in, had, like others before, “slipped the surly bonds of Earth,” but this time, there was a difference: there’d be a stop en route — on the moon.

Now, 50 years later, with the 50th anniversary of the momentous moon walk just days away, NASA, the towns along Florida’s Space Coast and others across the country are planning major celebrations.

The Space Coast is getting a boost from the new, partly privatized space program that’s started operating from the Kennedy Space Center. The towns had been devastated by the end of the shuttle program in 2010. With much of the launch program now in the hands of companies like Boeing and SpaceX (the pet project of billionaire founder Elon Musk), scientists and tech types are pouring back into the area, as are tourists.

My wife and I have watched SpaceX liftoffs from two different vantage points — the beaches at Lori Wilson Park and Alan Shepard Park (named for America’s first astronaut) in Cocoa Beach. They offer not just beautiful stretches of sand and seagrass-covered dunes, but restrooms and flat-rate parking, amenities that can come in handy since there’s always a launch “window” and you might be there a while.

Each time we’ve watched, the crowd cheered the sight of the racing fireball and cheered again for the earth-shaking sonic boom that followed. Even more awe-inspiring has been the return of the giant booster rockets, which descend about 10 minutes after liftoff for pinpoint vertical landings for re-use on another flight.

Both parks are some distance from the space center, as is Space View Park in Titusville, another prime viewing area. The only way to get really close is to pay for a pricey ticket for stadium seating at the space center. Even then, you could be several miles from the launch pad at best, depending on which pad is being used.

Tickets are expected to be in high demand when SpaceX launches a NASA crew aboard the Falcon Heavy, the world’s largest and most powerful rocket, to rendezvous with the International Space Station as soon as late July — the first time since the end of the shuttle program that an American rocket has carried American astronauts into space.

Cocoa Beach and Cocoa, the towns most closely associated with the space center, are sprucing up. In Cocoa Beach, popular with families and surfers, 1960s motels and apartments line the main road through the outskirts, alternating with fast-food restaurants and the occasional surf shop or boutique. But the bars and restaurants along the beach do a brisk business, especially on launch days.

Captain J’s, a casual restaurant with a second-story deck at the entrance to Alan Shepard Park, was empty when we arrived for a recent launch. (The restaurant’s specialties include fresh alligator tail, so if you want a taste of the world’s largest surviving dinosaur, this is your place.) So was the adjacent Sandbar Sports Grill; it offers a patio facing the dunes. An hour closer to launch time, both were crowded, many of the patrons toting cameras with huge telephoto lenses.

Nearby, the Ron Jon Surf Shop — the chain’s flagship store — rules the roost. With 52,000 square feet on a two-acre site, the colossally gaudy emporium, open 24/7/365, sells everything from surfboards to skateboards, snorkeling equipment, GoPros and a mind-boggling array of colorful beachwear (expensive) and tchotchkes (cheaper but not inexpensive).

It also sells customized Chrysler PT Cruisers, which are tricked out like vintage Woody Wagons. You can’t miss the store: It’s painted bright yellow and turquoise and surrounded by towering sculptures with watersport motifs.

Downtown Cocoa Beach is showing new promise with restaurants, bars, several art galleries and intriguing boutiques in a compact area with a pleasant vibe. A new beautification program has added landscaping along the sidewalks and colorful murals on the sides of a number of buildings.

Check out the whimsical gifts and baubles at Secrets of Cocoa Beach, the works by local artists at the Studios of Cocoa Beach or the fashionable ladies’ wear at Ginger, Grapefruit and Rosemary. Among the surf shops in town, two call the neighborhood home: Neilson Surf Shop Surf School and School of Surf.

When we went downtown one recent evening, a well-dressed crowd was enjoying drinks on the patio at Heidi’s Jazz Club while waiting for the show. Others were basking in the warm glow of a spectacular sunset at tables outside Juice ‘n’ Java Café, a coffee house with a good selection of coffees, smoothies and energy drinks and a light menu that includes some gorgeous salads. There’s often live music after 5 p.m.

Down the street, Flavour Kitchen and Wine Bar was crowded. And Fat Kahuna’s, steps from the beach, was turning prospective diners away; its inventive menu includes such specialties as Kona coffee-encrusted Norwegian salmon.

Earlier, before the launch, we had explored pristine Historic Cocoa Village in Cocoa, several miles inland across the Banana and Indian rivers. The district, the city of Cocoa’s original downtown, was a tropical charmer, chic shops and eateries lining shady brick sidewalks with benches where friends and neighbors sat and passed the time of day.

At The Bath Cottage: Home of Bamboo we were greeted by Angela James, a sales clerk who migrated from Cleveland decades ago and, like many Florida residents, never looked back. She explained how the naturally thermodynamic bamboo bed sheets on display keep one cool when it’s hot and warm when it’s cold (not usually a problem in Florida, we thought, but good to know nonetheless).

Heading out on my own to take some pictures, I peeked in Green Circle Art at the nicely preserved old Masons’ building; it shows the work of 60 local artists and artisans. My wife, meanwhile, checked out the Magic Dove Magic Shop and delightful Annie’s Toy Chest, which occupied a white clapboard house that looked like it could have been plucked from Nantucket.

The restaurants all looked inviting. Several couples were sipping wine beneath giant red umbrellas outside Ossorio Bakery & Café, known not just for its delicious pastries and breads, but for roasting its own coffee beans and making its own ice cream from scratch. It also serves sandwiches and pizza.

A block down the street, in a delightful courtyard lined with nifty shops, Café Margaux, which has been featured on the both the Cooking Channel and the Food Network, has been serving classic European cuisine since 1989. Its spring menu includes coquilles St. Jacques, the classic French scallops dish, and roast duck a l’orange.

Villa Palma at the Village serves excellent Italian cuisine. Slightly out of character in the quaint neighborhood, Blind Lion Jazz, with a full bar, offers everything from alternative rock and blues to jazz.

In the center of the village, the stately 95-year-old Aladdin Theater, once a vaudeville house, is now owned by the city, which renamed it the Historic Cocoa Village Playhouse. It presents local and touring productions for 50,000 paying ticket-holders a year.

The long-running 1960s TV comedy “I Dream of Jeannie,” based on the fairy tale Aladdin and the Magic Lamp, starred Larry Hagman as an astronaut who lived in Cocoa Beach and became the accidental master of a beautiful genie, portrayed by Barbara Eden, who granted not one, but all his wishes.

Perhaps another genie has granted the Space Coast its most fervent wish — a new manned space program.

Martin W.G. King is a freelance writer based in Delray Beach, Florida, who enjoys writing about travel destinations of interest to West Virginians.

Celebrating the 50th Anniversary of the Moon Landing

For a list of Apollo 11 celebrations across the country: bit.ly/ApolloCelebrations

For information on the many commemorative events and celebrations sponsored by the Astronaut Scholarship Foundation: bit.ly/MoreApolloEvents, or call the foundation at 407-362-7900.

Apollo/Saturn V Center: NASA has expanded and completely reimagined its Apollo space flight exhibits. With a public reopening scheduled for July 15, the immersive exhibits will include everything from a Saturn V rocket, an Apollo capsule, a replica of the lunar module, a simulated rocket ride, new movies and a "moon tree garden" grown from seeds taken by the crew of Apollo 11 to the moon and back.

Rocket Garden: On July 24, NASA will celebrate the anniversary of the return of the Apollo 11 astronauts to Earth in the Rocket Garden.

Note: You’ll have to pay for a one-day pass (minimum) for the space center (one-day pass for adults, $57; children $47; military and seniors, $50; military children, $41; discounts for two-day and longer passes).