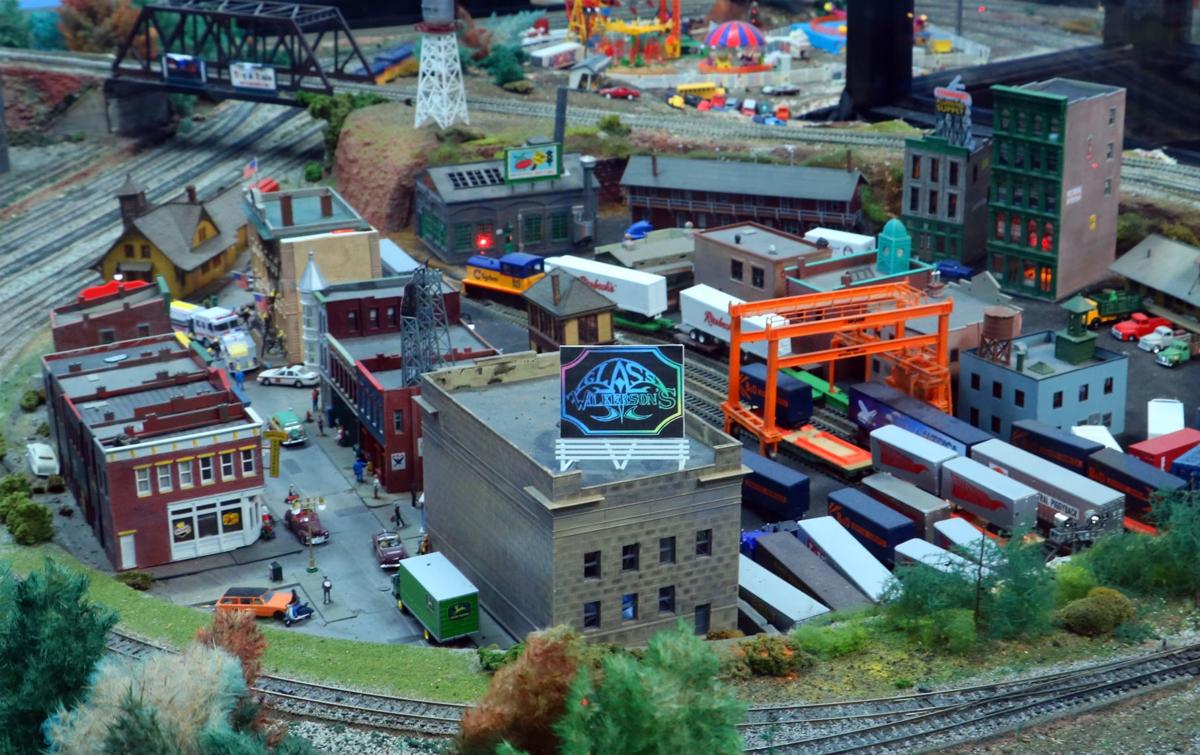 One of the train exhibits at the Kruger Toy and Train Museum in Wheeling. 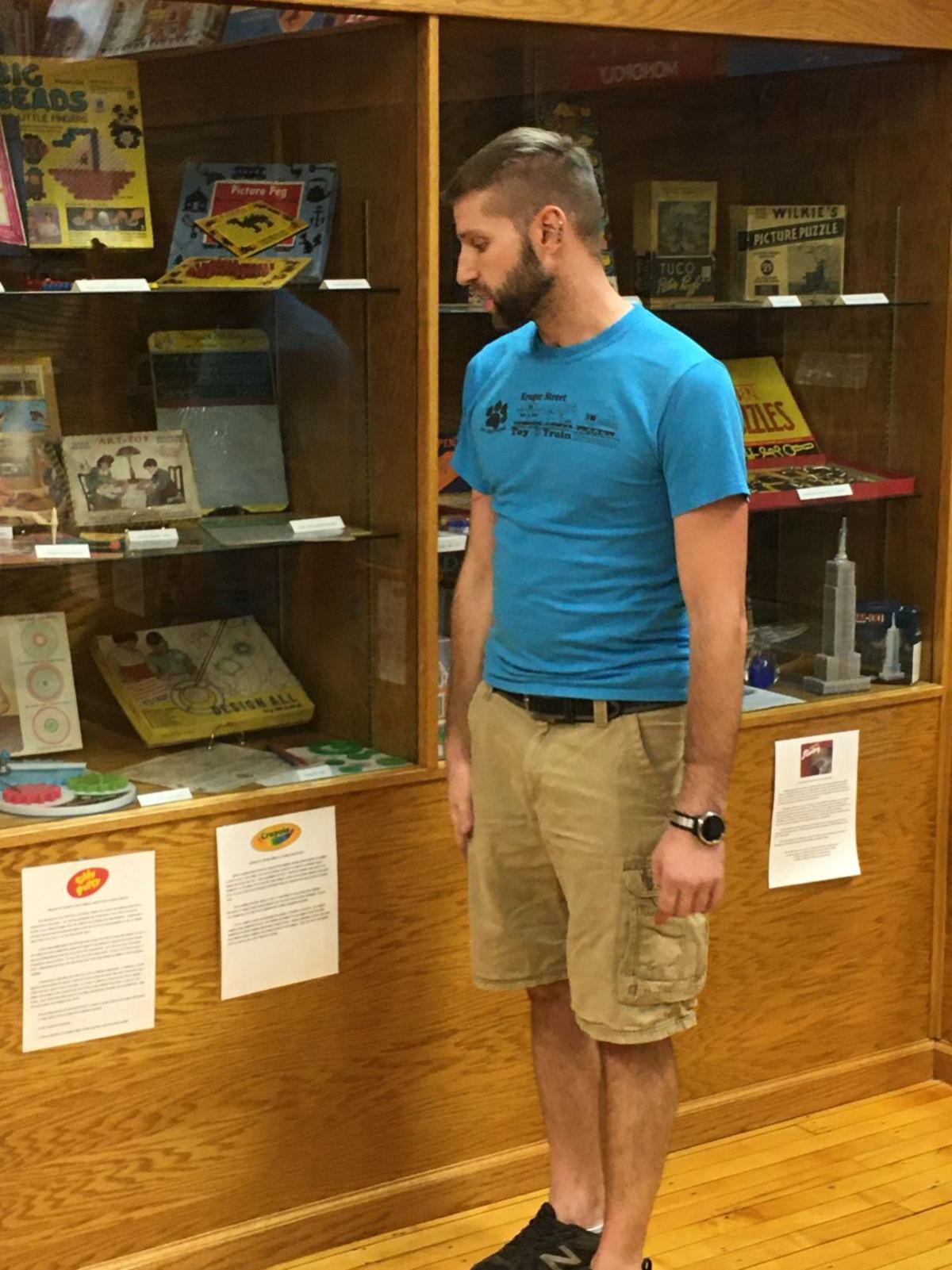 Curator Jimmy Schulte in the game room at the Kruger Toy and Train Museum in Wheeling.

One of the train exhibits at the Kruger Toy and Train Museum in Wheeling.

Curator Jimmy Schulte in the game room at the Kruger Toy and Train Museum in Wheeling.

WHEELING — Just in time for the holidays: your chance to walk down the enchanted memory lane of childhoods past.

Even before you enter the Kruger Toy and Train Museum in Wheeling, there’s an invitation for fun just outside the doorway. Recall those kiddie rides you used to put a quarter in the slot to start? There are two of them just begging to be ridden.

Inside, curator Jimmy Schulte claims the museum’s collection of toys and trains is close to a half-million items, 100,000 of which are on display. To organize this vast collection, the displays are themed and housed in 10 different rooms on two floors of an old 1906 Victorian schoolhouse, an interesting beauty in its own right.

Just to the right of the ticket booth, the Doll Room denizens are displayed chronologically, starting with Barbie dolls from the 1950s up to today’s American Girl dolls. Some older dolls actually date back to the early 1900s. The room also has a large dollhouse (one of many) built from scratch that’s interactive and allows children to move and position the furniture as they see fit.

The Miniature Room holds figures of everything from toy soldiers to a set of miniature U.S. presidents crafted by the company of Louis Marx, a toymaker and businessman of the mid-20th century, known as the “toy king of America.” Also on tiny display, cowboy and Indian play sets like Fort Apache and Zorro, and still other collections with farm, even prehistoric themes.

The Game Room should bring back a lot of memories with its collection of Rock ‘Em, Sock ‘Em robots, marble games and board games like Cootie, Trivial Pursuit, Axis & Allies and Clue.

There are whole other rooms devoted to train layouts with a track that runs around a quaint mini-village and rooms themed to transportation and Ohio Valley history. Schulte likes to remind visitors to look above the glass cases in each room to find even more interesting items.

My personal favorite room is the K-Land K’nex, a display of working miniature amusement park rides made from over 250,000 pieces including a Ferris wheel and roller coaster. The room is black-lit, which emphasizes the colored neon lights on the rides. Coupled with musical sounds you hear at an amusement park, it creates a dazzling experience.

Upstairs a special exhibit currently celebrates the 80th anniversary of “The Wizard of Oz” film, and another one with a Disney focus is coming soon. It’s just one of seven scheduled for next year. In the lobby, children can look through plastic domes that rise above the platform holding a Lego display while teens and adults have free play on a quartet of pinball machines.

The museum dates back to 1998 when father and son, both named Alan Miller, decided it would be a nice fit for their extensive collection. Since then, the collection has grown even more with donations by private individuals and visitors.

More than likely, on a tour, you’ll run into Loo — a friendly, plump, black, white and gray resident cat that’s a real show stopper. Named after toymaker Louis Marx, who ran a manufacturing operation in nearby Glen Dale, Loo is often seen wearing a bow tie around his neck.

Marx toy fans might want to circle the dates June 19 and 20, 2020, when the annual Marx Toy Train and Collectors Show brings more than 80 vendors as well as speakers and presenters to the Kruger Street Museum to swap stories with toy enthusiasts. The event also features an auction of unique pieces, so bring your checkbook.

Like most museums, there’s a gift shop full of related items. Maguire said among the best-selling items are the “mystery bags” marked “boy,” “girl” or “adult,” which sell for $4 to $15 and are full of surprises.

Schulte said the busiest times at the museum are summer and Christmas, when the museum is lightly decorated and Santa visits some weekends. But with all those trains and toys, who needs a lot of decorations and tinsel?

Place to Stay: For the past 6 years, the Hampton Inn, 795 National Road in Wheeling, received the Connie Award (short for Conrad Hilton) for being one of the top six Hampton Inns in the nation. The hotel offers a free shuttle to destinations within five miles, including Oglebay Good Zoo and Wheeling Island Racetrack & Gaming Center. A fitness center, outdoor courts and an aquatic center give visitors plenty of fitness options, and the outdoor grills are a great way to unwind. Breakfast and Wi-Fi are complimentary, and the outdoor fire pit is warm and welcoming. Phone 304-233-0440.

Place to Dine: Figaretti’s Restaurant, 1035 Mt. de Chantal Road in Wheeling, has been a popular eatery since 1948. The restaurant moved to its current location about 20 years ago, and the founders’ grandson, Dino, is the present owner. Among the homemade specialties, the Chicken Parmesan is reported to be the most popular item, but the kitchen also offer steaks, seafood, desserts and more. Phone 304-243-5625 or figarettis.net.