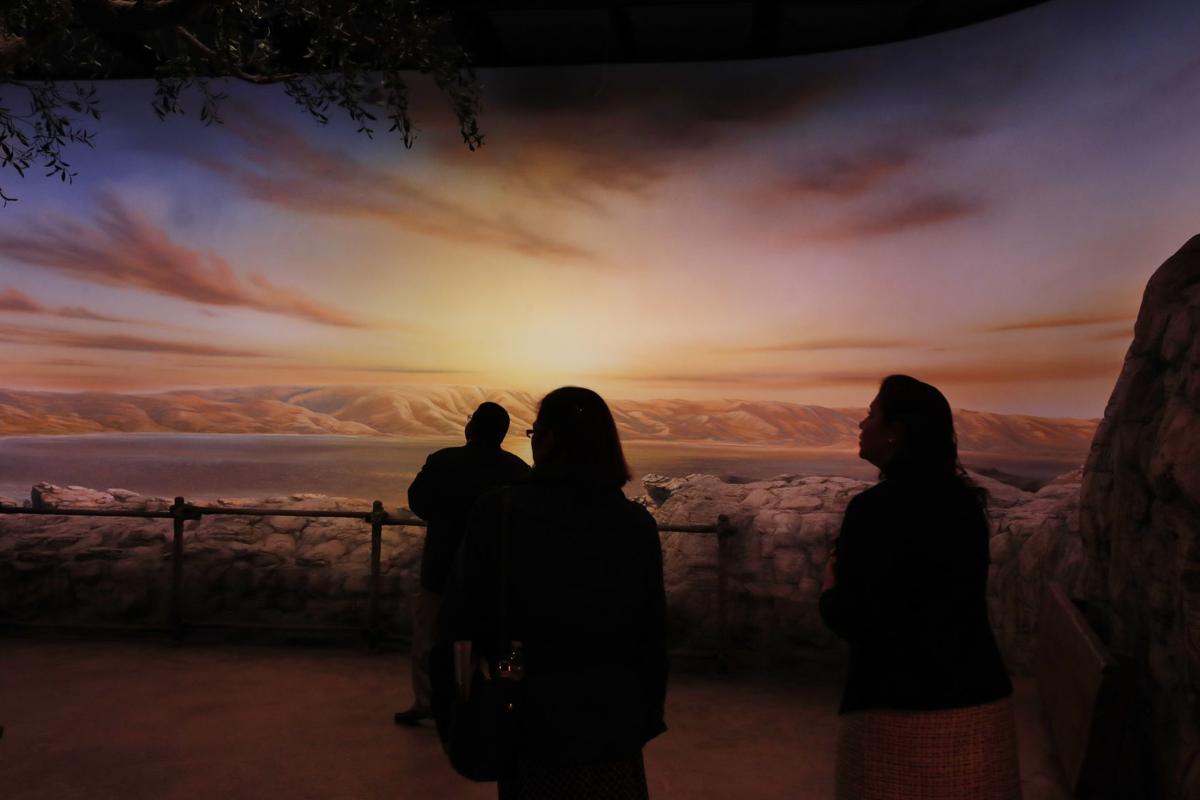 Visitors preview the exhibit “The World of Jesus of Nazareth” at the Museum of the Bible, Monday, Oct. 30, 2017, in Washington, D.C. 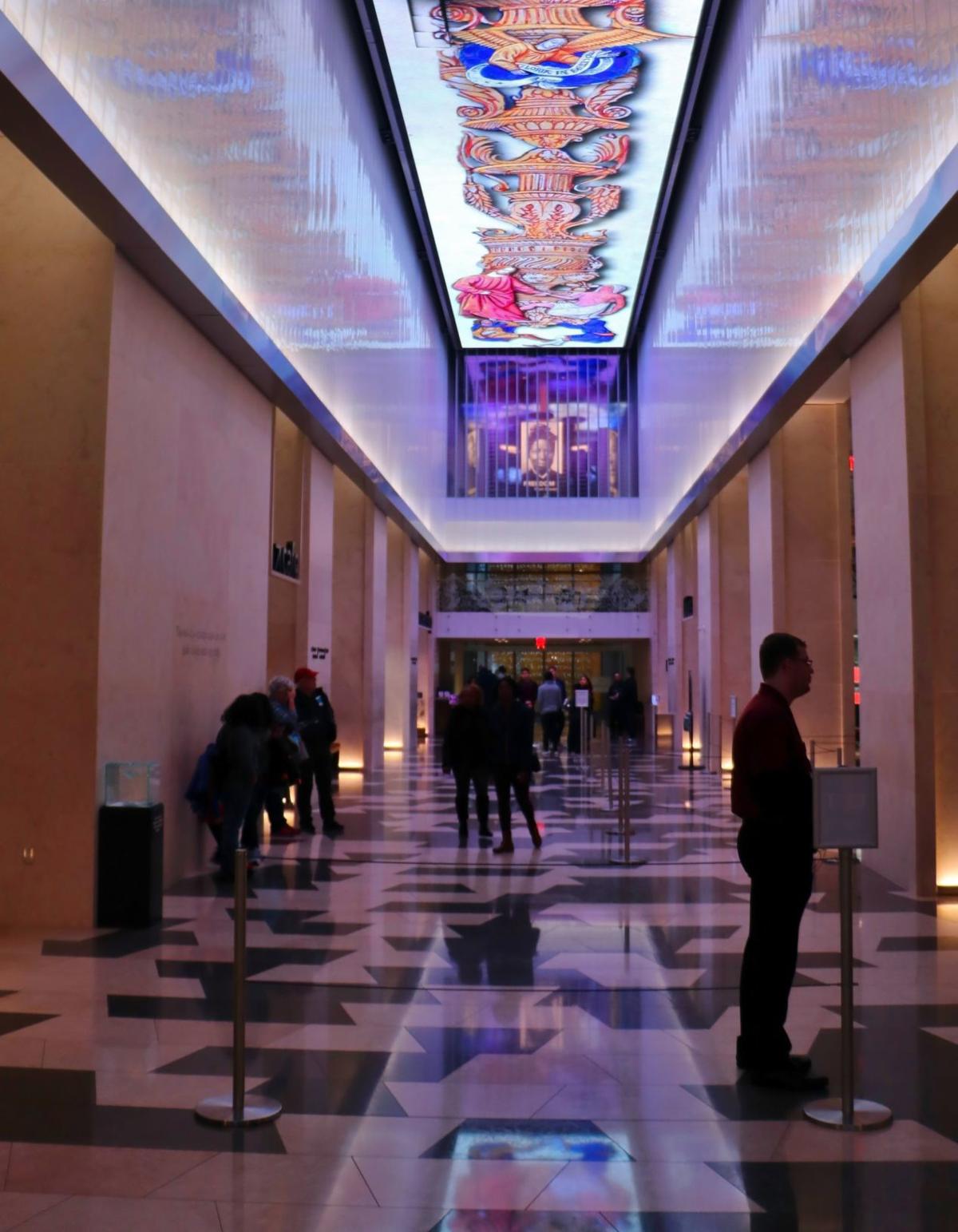 The Museum of the Bible entrance corridor, with LED mural on ceiling. 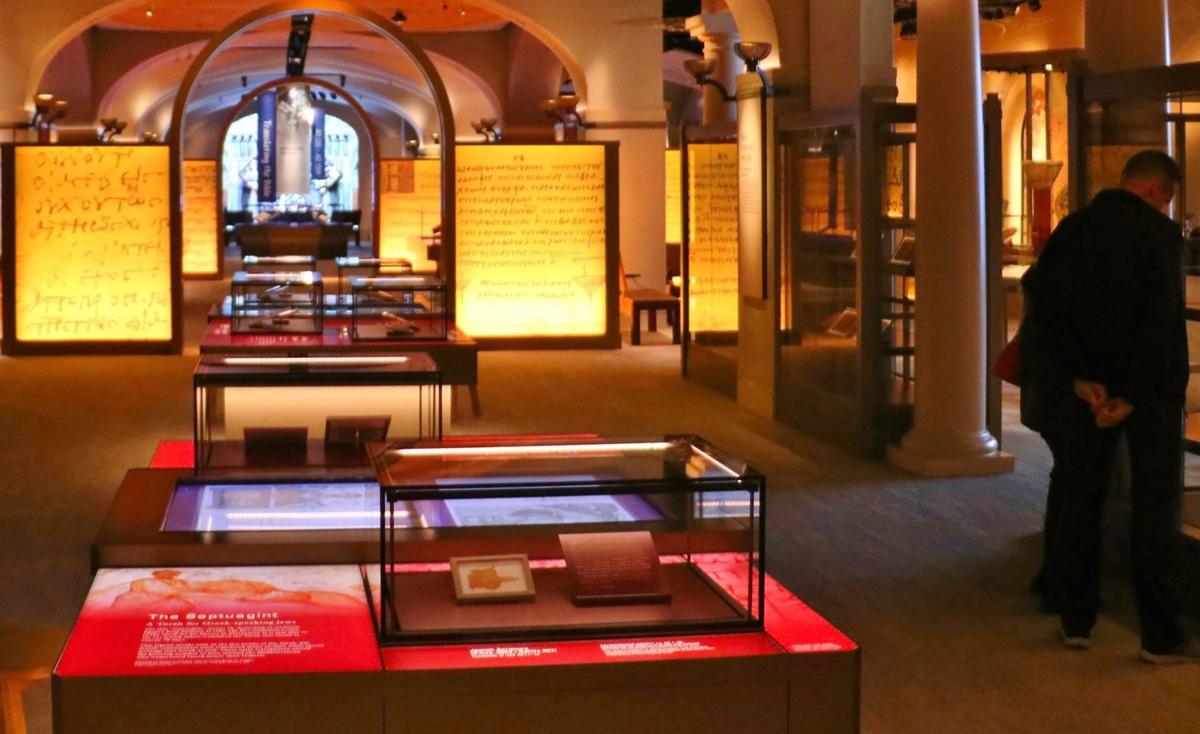 A look at some of the the fourth-floor exhibits at the Museum of the Bible. 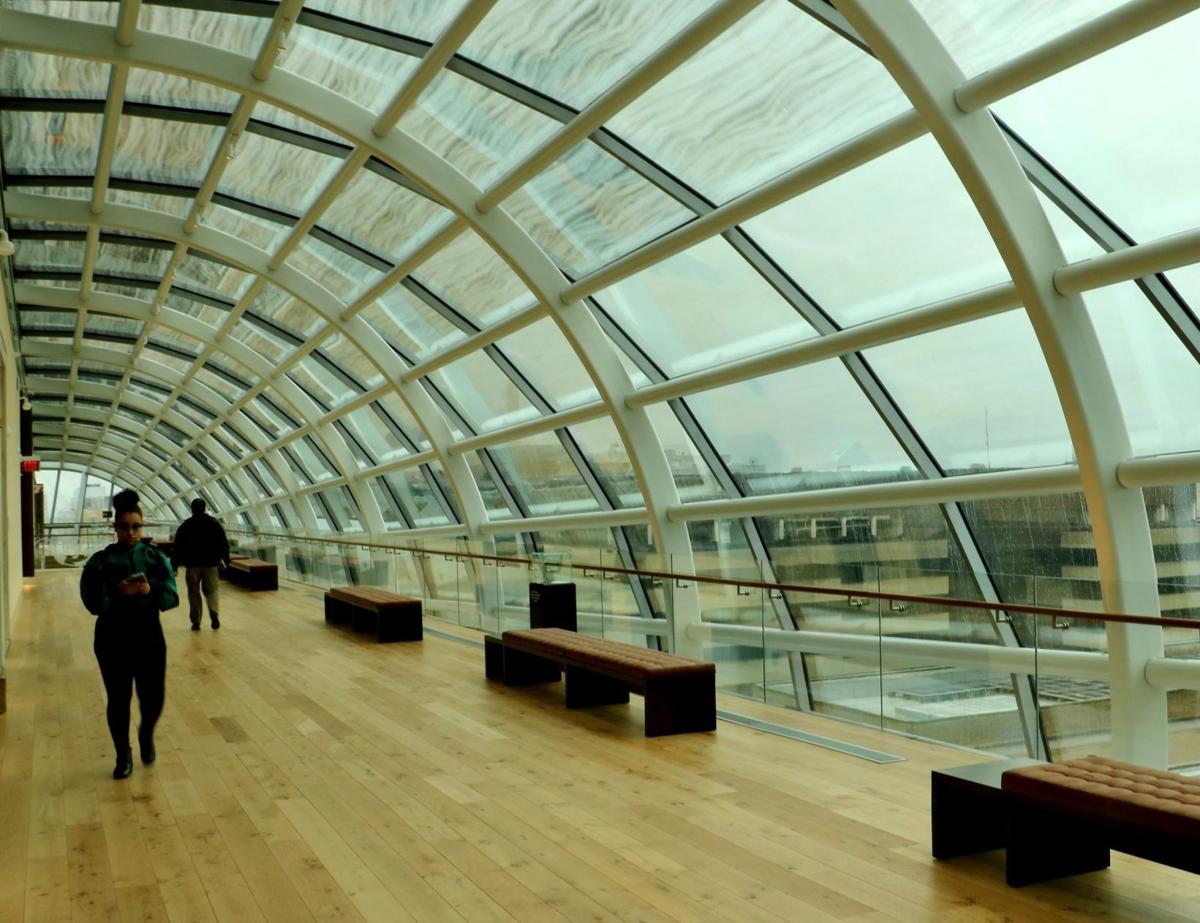 The glass-enclosed promenade on the sixth floor. 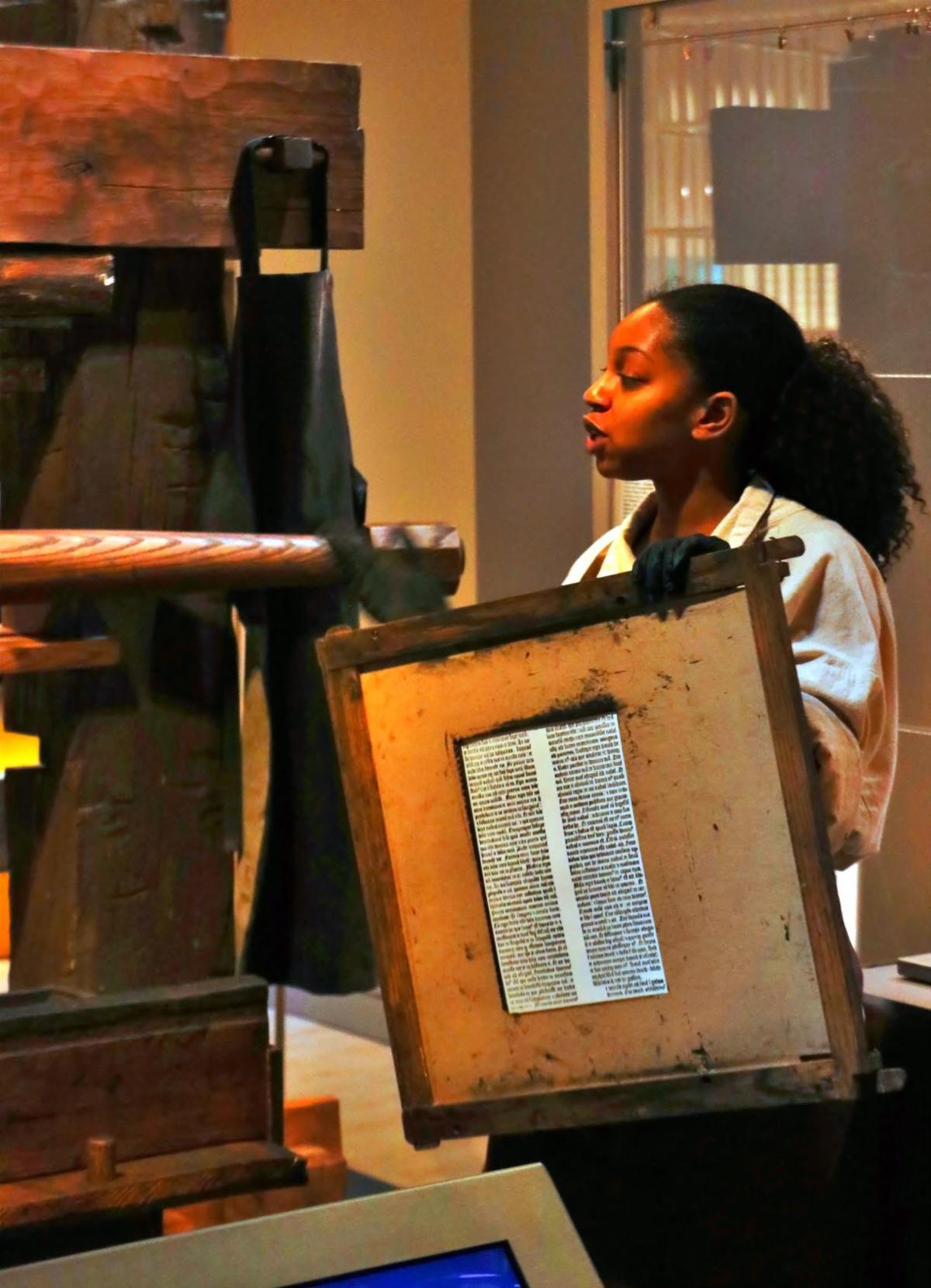 An interpreter demonstrates how a page of the Gutenberg Bible was printed. 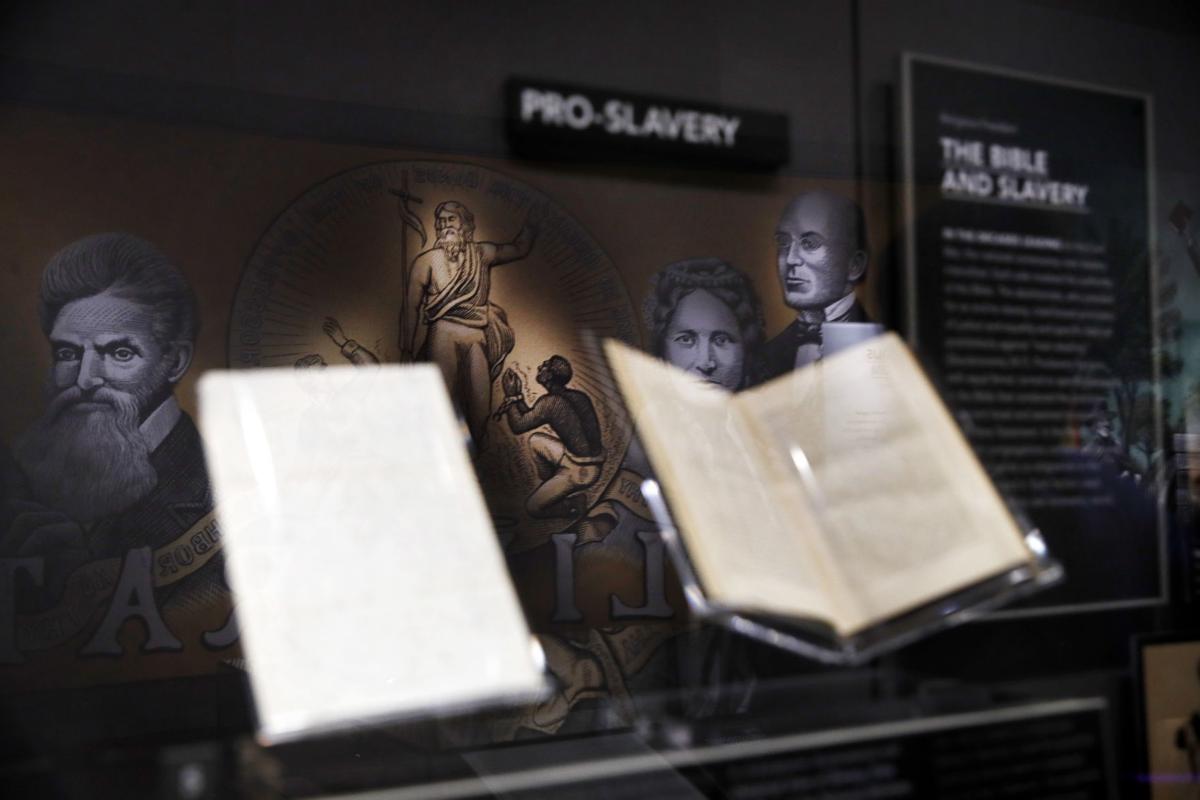 An exhibit discussing slavery in the United States is displayed inside the Museum of the Bible, Monday, Oct. 30, 2017, in Washington.

Visitors preview the exhibit “The World of Jesus of Nazareth” at the Museum of the Bible, Monday, Oct. 30, 2017, in Washington, D.C.

The Museum of the Bible entrance corridor, with LED mural on ceiling.

A look at some of the the fourth-floor exhibits at the Museum of the Bible.

The glass-enclosed promenade on the sixth floor.

An interpreter demonstrates how a page of the Gutenberg Bible was printed.

An exhibit discussing slavery in the United States is displayed inside the Museum of the Bible, Monday, Oct. 30, 2017, in Washington.

WASHINGTON — Admittedly, it took me more than a year to make a first visit to the Museum of the Bible, the largest privately financed museum in our nation’s capital. But one blustery day at the end of December, I finally got off the D.C. Metro at Federal Center and headed to the colossal, six-story, 430,000-square-foot museum just a few blocks off the National Mall and Capitol Building.

The brainchild of Hobby Lobby Chief Executive Officer Steven Green, the impressive museum took nearly a half billion dollars to complete by the time it opened on Nov. 17, 2017. With a goal of educating the public on the history of the world’s most famous book and its global impact, the museum is nonsectarian and is said to have an interest for Christians of all denominations, people of all faiths and even nonbelievers.

Just from the vantage point of the street the building is impressive, and its entryway — with its 40-foot-tall bronze gates inscribed with the first lines of Genesis in Latin from the Gutenberg Bible — certainly stokes a sense of awe. Once inside, your eye is drawn upward to the 140-by-15-foot LED mural that changes every 15 seconds with 250 different colorful images of everything from church frescoes, illuminated manuscripts and nature to art, biblical images and architecture.

The mural highlights the museum’s use of the latest in technology, with interactive touch screens, special effects and electronic screens of significant people who impacted the Bible, like Erasmus and Martin Luther, to tell the story of the Bible and its history by also showcasing rare artifacts that span 3,500 years of history.

Something I missed as I looked skyward was the black-and-white tile floor, which, according to Sheridan Dawn Betts, the museum’s social media specialist, get progressively lighter-toned as you walk forward into the museum to symbolize going into the light.

One estimate says that, if a visitor read every bit of signage, viewed every film, took part in every interactive exhibit and scanned every artifact, they’d spend a minimum of nine 8-hour days in the museum. On a tight schedule, I spent 2½ hours looking around, plus a half hour extra for lunch.

To make things easier for first-time visitors, I’d suggest picking up a digital guide at the entrance on arrival. It can customize your tour and give you running commentary on artifacts of interest.

Exploring the Hebraic roots of the Bible, items in the exhibits include shekel weights used to measure the authenticity of coinage, as well as a coin minted within 70 years of the destruction of Jerusalem. The coin constitutes one of the most significant witnesses to the end of the Second Temple period, preserving a rare depiction of the Jewish Temple.

Other noteworthy items include a section of a dream tablet from the “Epic of Gilgamesh,” written on a piece of clay dating to 1500 B.C. in Iraq; ancient handwritten Bibles; printed pages from a Gutenberg Bible; an original King James Bible with “The Book of Common Prayer”; a Bible brought over on the Mayflower; and Bibles owned by important people, like Billy Graham and Elvis Presley.

Elsewhere, you’ll find the Jeep used by Dave Stotts to document the places he explored for his “Drive Through History of the Bible” series, which is screened in one of the museum theaters. A quiet space on the floor titled “IlluniNations” showcases Bibles in over 2,000 different languages, with 680 having translations of the Old Testament. Visitors are able to touch, read and explore these Bibles and contribute a Bible of their own printed in one of the more than 800 languages still lacking a translation.

In the New Discoveries Gallery, you’ll find artifacts and stories from the Israel Antiquities Authority, including the current one that explores the intricate skill of glass production in Israel during the first millennium.

Approaching the lunch hour, I headed up the sixth floor to Manna, a restaurant owned by Ellen and Todd Gret, a couple whose culinary offerings are inspired by a trip to Israel. Using ingredients found in the Mediterranean, the restaurant sports menu items with Biblical references such as Exodus — lamb meatballs, tabbouleh with pistachios and dates, grilled corn and halloumi salad and olive tapenade. There’s even a flatbread pizza named Delilah that’s topped with spiced Mediterranean chicken, roasted corn, grilled halloumi, mozzarella and red onions.

After lunch, I took in the sweeping view of the city when I walked through the glass-enclosed promenade that runs partially along one side of the sixth floor.

The third floor of the museum proved to be my personal favorite. I started my look around with “The Hebrew Bible Experience,” a 30-minute walk-through some of the most well-known Old Testament stories. Once inside, I walked through a facsimile of Noah’s ark, trod over the bed of the Red Sea with walls of water on each side and got close to a high-tech rendition of the burning bush.

Another impressive experience, “The World of Jesus of Nazareth,” is a recreation of the village where Christ spent his childhood, complete with buildings and live villagers dressed in period clothing. As a follow-up, a step inside the New Testament Theater gives you an account of how Christ’s early disciples and followers grew into a large and flourishing group of believers.

For how the Bible has impacted the world and influenced the history of the United States, peruse the second-floor exhibits. There are a total of 22 of them that explore the Bible’s relationship to architecture, art, fashion, music, film, government, even the names we give our children.

With an admission add-on of $4.99, you can take a 6-minute virtual flyover of our nation’s capital to see biblical references, imagery and verses in and around Washington, D.C. For an additional $9.99, you can experience 34 of the best known Biblical sites without leaving your chair through a virtual experience that takes you to the Sea of Galilee, the Temple Mount and the path of the Good Samaritan.

Of the more than 40,000 Biblical artifacts in the collection, one that garnered the most attention after the museum opened was a reference to the Slave Bible, meant not only to teach slaves in the British colonies about Christianity but also to emphasize portions that justified and fortified the system of slavery. The Slave Bible is actually on loan from Fisk University in Nashville, Tennessee. Betts said visitors were so interested in the subject that the museum created an entire exhibit about the subject.

Elsewhere, displays explore how Christian preachers used the Bible to justify slavery, but counter with the opposite quotations given by Abolitionists to justify their stance.

For a place to stay the Hotel Harrington is a half-block away from Pennsylvania Avenue between the White House and Capitol and within walking distance to many attractions. To make things even more convenient, the Metro is two blocks away. The hotel also offers 242 guest rooms, including 26 deluxe family rooms, a full service restaurant, a quick-service restaurant, a friendly pub and a gift shop offering tickets for great local sightseeing tours.Located at the corner of 11th and E streets in the heart of D.C., the Harrington has been serving the public for nearly 105 years. Call 800-424-8532 for reservations or visit hotelharrington.com.

For a place to dine, Ambar Restaurant is the first modern, international Balkan cuisine restaurant in D.C. Primarily featuring small plates for sharing, Ambar offers wines and spirits from the Balkans not often experienced by the American diner.

Start off with lamb or beef prosciutto, then choose from an array of kadmuk (similar to clotted cream), tasty spreads with bread, baked meat or cheese pies and assorted vegetables, including leek fritters and mushroom pilaf. Additional plates include steak tartar, Balkan kebab, slow-cooked entrees, sausages and tasty seafood dishes.

Want to try rakia, the Balkan version of fruit brandy? Ambar offers tasting of close to 48 varieties, plus five Balkan beers and wines from Moldova, Macedonia, Bulgaria, Slovenia, Croatia, Serbia and Montenegro, and even a sparkling wine from Armenia.

The restaurant’s menu is exciting, the space is lively and popular, the decor and interior design are created by some of the best Belgrade designers. Ambar is located at 523 Eighth St. SE in Washington and is within walking distance of the Metro. Call 202-813-3039 or visit ambarrestaurant.com for more information.