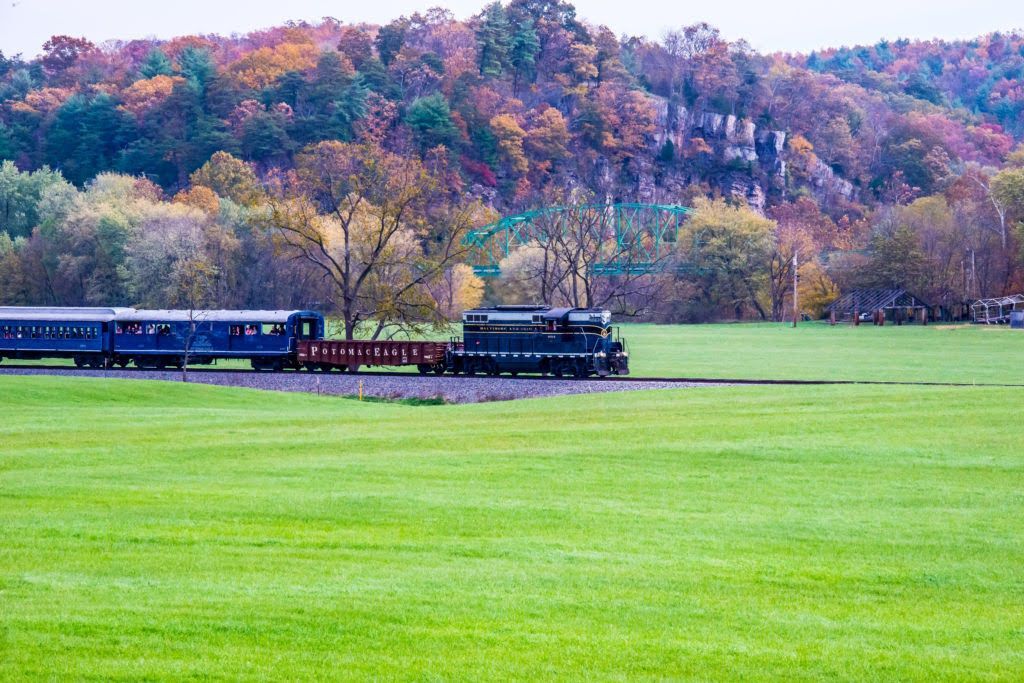 The Green Spring Special passes by rock cliffs near the unincorporated community of Blues Beach in Hampshire County. 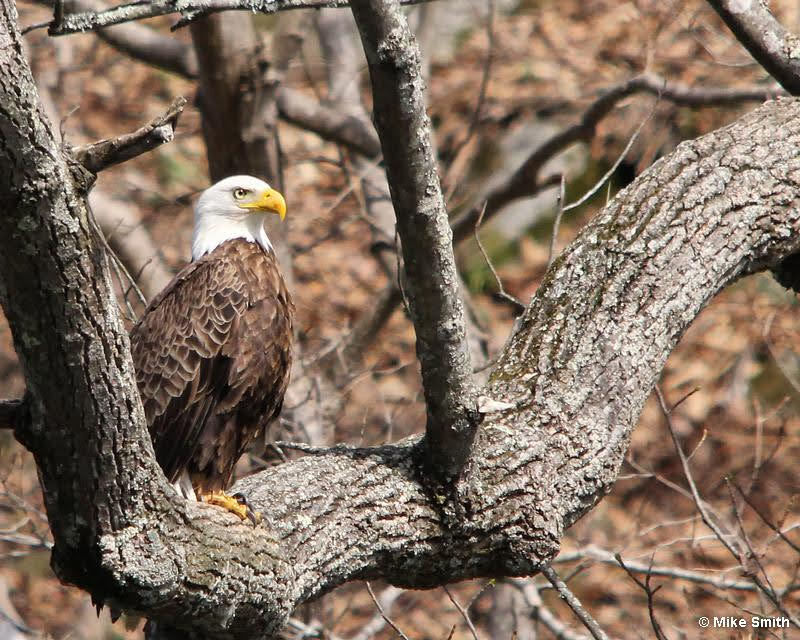 Mature bald eagles, like this one, have a distinctive white head that make them easy for passengers to spot from a passing train. 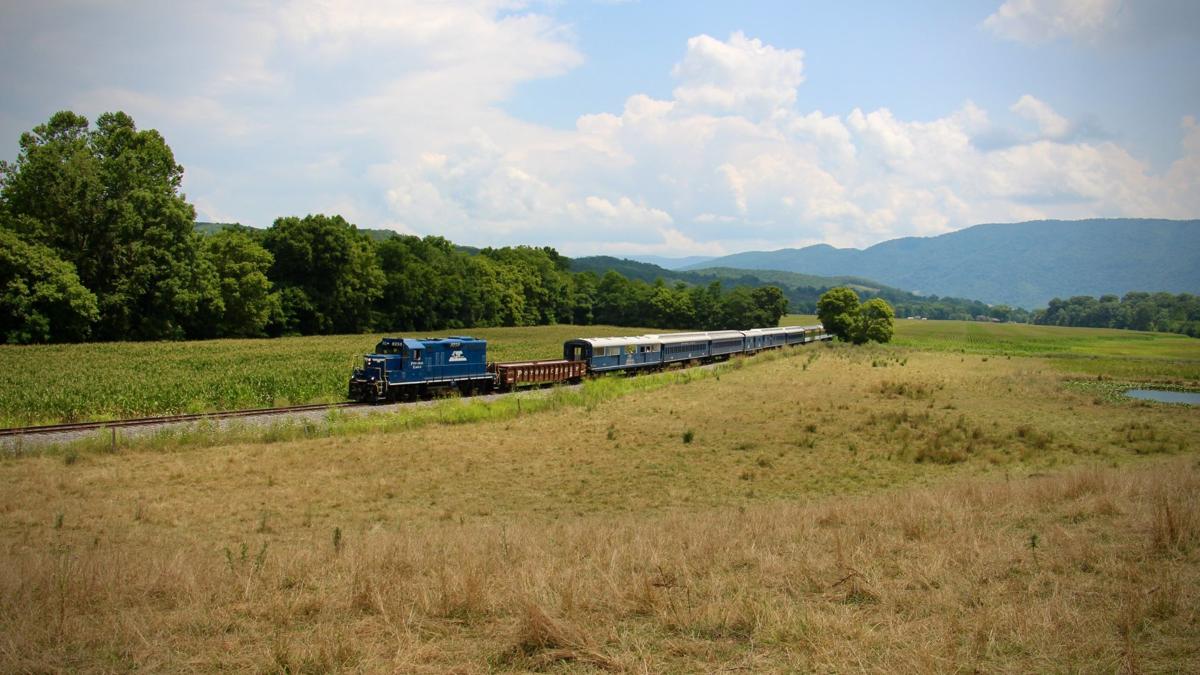 Most excursions cut through beautiful farmland and pass scenic rivers. 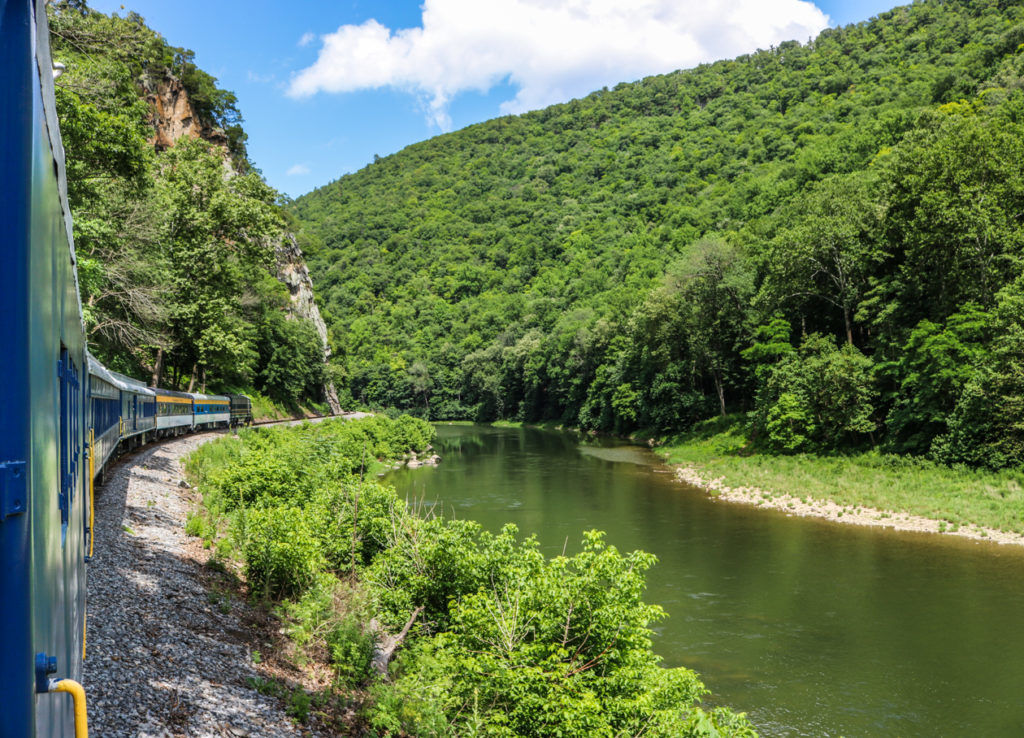 The Trough excursion is a 3-hour, 35-mile round trip that goes southbound through the Trough to Sycamore Bridge and back, passing through a narrow, 6-mile gorge where eagles are frequently seen. 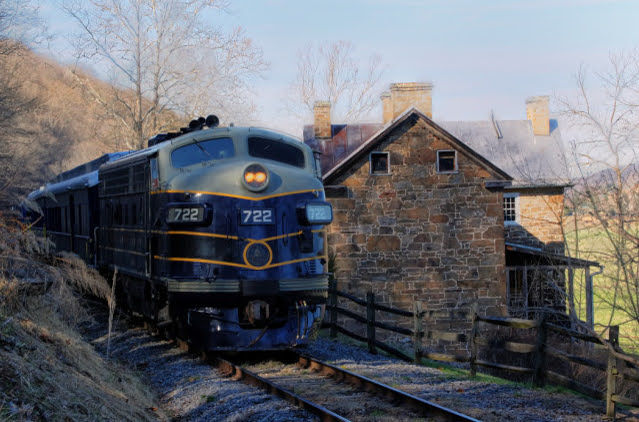 Listed on the National Register of Historic Places, the Nathaniel and Isaac Kuykendall House is a historic, two-story stone house built in 1789 in rural Hampshire County.

The Green Spring Special passes by rock cliffs near the unincorporated community of Blues Beach in Hampshire County.

Mature bald eagles, like this one, have a distinctive white head that make them easy for passengers to spot from a passing train.

Most excursions cut through beautiful farmland and pass scenic rivers.

The Trough excursion is a 3-hour, 35-mile round trip that goes southbound through the Trough to Sycamore Bridge and back, passing through a narrow, 6-mile gorge where eagles are frequently seen.

Listed on the National Register of Historic Places, the Nathaniel and Isaac Kuykendall House is a historic, two-story stone house built in 1789 in rural Hampshire County.

ROMNEY — In the mood for a relaxing scenic rail excursion as an antidote for coronavirus cabin fever, I made a quick check online to see what my neighboring state of West Virginia might have to offer. I chose the Mountain State because it was both close as well as removed from the densely populated areas nearby where the epidemic was on the upswing.

My search turned up four options, and the Potomac Eagle Scenic Railroad seemed the best fit. Not only was it a little more than just a two-hour drive from my home in Southwestern Pennsylvania, it also promised a look at bald eagles nesting along the route as the excursion follows the course of South Branch of the Potomac River out of the charming hamlet of Romney.

Arriving early — around noon — I got to see the train pulling into the station from its morning outing, a 25-mile round tripper northbound to Green Spring and back. The powerful blue diesel locomotive from the 1940s has been restored, and pulled in with a string of cars including a gondola, which gives passengers a chance to sit outdoors in the open air if they choose.

Additional cars include a 1920s-era coach with cushioned, high back bench-style seats, a premium coach with four top tables, a first class coach in an upgraded vintage 1947 car and a superior club car where four course meals are served, usually on Chesapeake and Ohio Railroad china.

While waiting to board, I used the hand sanitizers in large gallon dispensers sitting on tables by the ticket window, installed in a vintage caboose, and donned my mask — which passengers are required to wear during the excursions. With ridership numbers down because of the epidemic, social distancing on board is mandated, and the total number of passengers per car is limited to 25 — about a quarter of the usual capacity.

With a ticket for the premium coach, my compadres and I sat around a table that looked out of the open windows as the train slowly slugged off to a start. Soon we were passing by fields of corn, grain and soybeans dotted with farmhouses, some from the 18th and 19th centuries, set against the wooded mountainous backdrop full of oak, maple and hickory.

Along the way, we spotted deer lazing under the shade of trees and a blue heron or two slowly winging its way over the river in search of a meal.

Train announcer Jean Shoemaker kept us tuned in, pointing out passing points of interest like the 1789 Kuykendall House, a handsome, two story stone manse now on the National Register of Historic Places.

“The big draws on the excursions are the scenery and the wildlife, especially the eagles in the trough,” Shoemaker said.

“The only ways to get through the trough [a stretch of rail where the gap between mountains narrows on both sides of the river] is by walking, canoeing or train,” she added.

Shoemaker has been with the railroad since it first started operating as a tourist line in 1991. The only current employee able to make that claim, she also includes in her narration some of the history of Hampshire County, of which Romney serves as the county seat.

The ride is a nostalgic one for those who remember the trains of yesteryear. Plodding along at a leisurely 15 miles per hour, the train’s rocking motion, the clickety-clack of the wheels on rails and slow-moving pastoral scenes that drift by are relaxing and hypnotic. Leave the Valium at home, take a deep breath of country air and get a stress-reducing antidote.

Just before we entered the trough, Shoemaker announced that the gondola was about to open for those who wanted to sit in the open air car. At the front of the gondola, an eagle-eyed eagle spotter kept a lookout for both nests and birds. When he found one or the other or both, he notified Shoemaker via intercom so she could announce his find and its location to the passengers.

Thus began a series of exciting searches for the majestic avians living in the wooded countryside.

“This time of year, the eagles like to be in the shade, just like us humans,” said conductor Greg Kesner. “They stand out a lot more in the fall after the leaves are off the trees.”

Our first find was a juvenile flying over the river. Six other calls followed throughout the day, four for eagles perched in trees and two for their nests.

Leaving the gondola and back inside my coach, I passed through the concession car, then walked to the back of the train for a chance to see the more upscale coaches (with special permission from management). By the time I reached the superior club car, the wait staff of Greta’s Kitchen, the on-board caterer, were serving cheesecake, the final course of the meal. Note: At the moment, no alcoholic beverages are allowed on board, although the owner hopes to add them in time for the 2021 season.

For well over 100 years, the rail line has served the valley through which the South Branch of the Potomac flows. The 52.2-mile route connects Green Spring in the north to Petersburg in the south, and dates back to 1884 when the section between Green Spring and Romney was completed. When entrepreneurs completed the section to Petersburg, the train hauled both freight and passengers. The Baltimore and Ohio Railroad took over operations in 1913 but later ended passenger service in 1939.

After B&O abandoned the line in the mid 1960s, the state took over the operation in 1978. In 1991, the excursion train addition was added to the line when the Eagle Passenger Car Company of Parkersburg purchased the railroad. Two years ago, Robert and Celeste Franzen bought the railroad and continued the excursions. The state, however, still owns the line.

“I always wanted to buy a train but couldn’t find one for sale back in my home state of North Carolina,” Franzen said. “I’d been looking for one for at least 10 years before I found the Potomac Eagle. Last year, ridership was up for the first time in 29 years, but it’s down this year due to the coronavirus.”

October has proven to be the busiest time of year for leaf-peeping excursions, although the season extends into December with the advent of the North Pole Express for the Christmas holidays.

One Friday each month, the Potomac Eagle offers a trough experience at sunset, May through September. One Saturday a month, an 8-hour, all-day excursion to Petersburg, a 76-mile round tripper that includes a stop in Petersburg to allow the passengers to enjoy the town’s shops and restaurants, is offered.

A full list of excursion options and other pertinent information is featured online at www.potomaceagle.com or by phoning 304-424-0736.