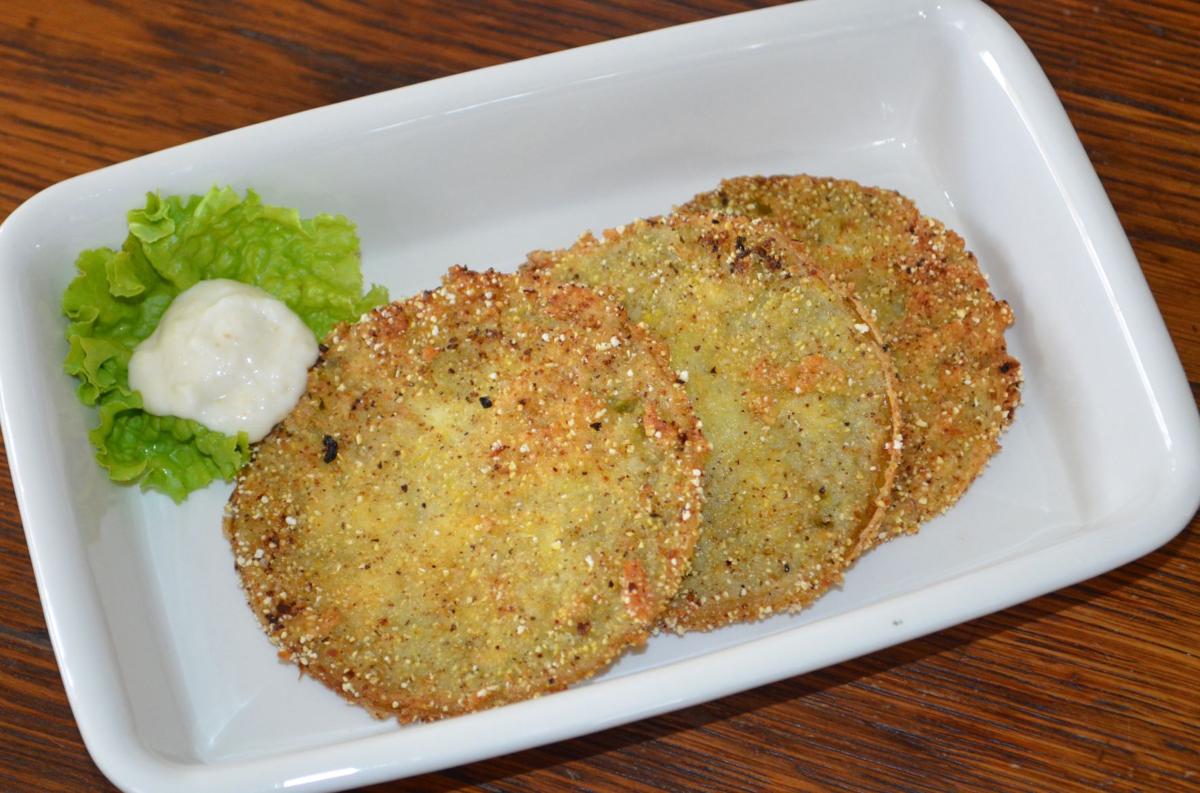 Fried green tomatoes may not be a true Southern dish, but they do have an end-of-summer taste. 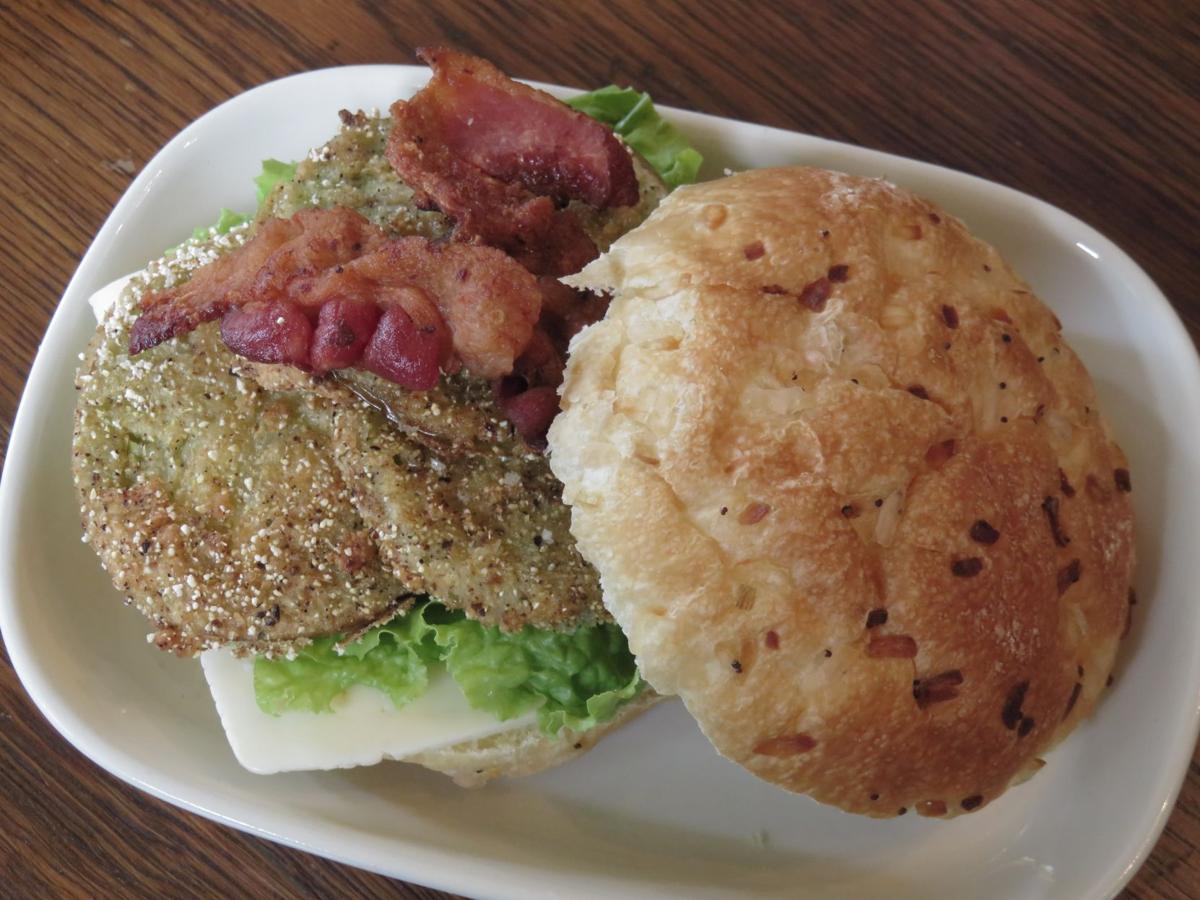 A fried green tomato BLT is an end-of-season twist on a popular classic.

Fried green tomatoes may not be a true Southern dish, but they do have an end-of-summer taste.

A fried green tomato BLT is an end-of-season twist on a popular classic.

Fried green tomatoes are more common in Southern West Virginia than they are in the Northern Panhandle, where my husband and I grew up.

They seem to be a year-round dish in the southern part of the state. In the north, they are a seasonal treat celebrating the end of the tomato-growing season, when gardeners salvage tomatoes from plants before the first frost.

Many are familiar with the 1991 movie, “Fried Green Tomatoes,” based on Fannie Flagg’s novel. The book and movie increased the popularity of fried green tomatoes and put them on the culinary map, but fried green tomatoes weren’t as popular in the South as one might think.

Fried green tomatoes are crusty on the outside and soft and tangy on the inside. Many green tomato aficionados swear the only way to make good fried green tomatoes is to use a cast-iron skillet, but any skillet will do, since the tomatoes are fried in shallow oil about ¼-inch deep. The temperature is kept at about 360 degrees. Some people add a tablespoon or two of bacon grease to add flavor.

Green tomatoes should be firm with no hints of color. They are sliced about 1/4-inch thick and placed on a rack over a paper towel. They must be generously sprinkled with salt to pull out some of the water and left for about 15 minutes. They are patted dry before use.

Robert F. Moss, a food writer and culinary historian from Charleston, South Carolina, said he doesn’t remember anyone in his Southern family who battered and fried green tomatoes. He researched the topic and found 11 fried green tomato recipes published in newspapers between 1900 and 1919. Surprisingly, all 11 newspapers were in Midwestern and northern cities. None were Southern newspapers.

During the 1920s, records indicate recipes for fried green tomatoes appeared in Frederick, Maryland, and Danville, Virginia, papers, but the Danville column came from a nationally syndicated source.

The real-life Irondale, Alabama, cafe, upon which the fictional Whistle Stop Cafe was based, was owned and operated for 40 years by Flagg’s great-aunt. There is no evidence the cafe ever served fried green tomatoes. Archived menus make no mention of fried green tomatoes, although they may have been served as an occasional side item.

It wasn’t until the movie came out and fans descended upon the cafe requesting fried green tomatoes that they became popular. The new owners developed a batter mix for the more than 60 pounds of fried tomatoes they were selling every weekday. The cafe’s signature dish was invented after the movie premiered.

Based on his research, Moss concluded fried green tomatoes are not a Southern dish, but originated in the Midwest and northeast, possibly linked to the cuisine of Jewish immigrants. A recipe appears in the 1889 addition of “Aunt Babette’s Cook Book” and “The International Jewish Cookbook” from 1919. Other recipes appeared in Ohio cookbooks in the late 19th century.

The lone fried green tomato recipe Moss found in the ’40s appeared in the Dothan Eagle. I was reprinted from a U.S. Department of Agriculture leaflet advocating Americans should begin the day with something nutritious, like fried green tomatoes. The editor of the Alabama paper mocked the recipe, saying “no self-respecting Southerner would dream of eating a fried green tomato.”

Chef Brian Halstead said he and his staff were using 500 or more green tomatoes daily during the 2017 tournament. The fried tomatoes were topped with bacon, arugula, goat cheese and black pepper aioli.

With the use of high tunnels to extend the growing season and hydroponic tomato production, locally grown green tomatoes can be found year-round, but, for me, green tomatoes still signal the end of summer and a time to salvage unripened tomatoes dangling on the vines before they get nipped by frost.

Whether you believe fried green tomatoes are a quintessential Southern dish or of Midwestern origin, I hope you will agree, they are a tasty way to end summer.

Susan Maslowski founded and operates the Mud River Pottery studio in Milton, where she has created utilitarian ware for nearly 40 years. She sells produce at the Putnam Farmers Market, serves on the board of the West Virginia Farmers Market Association and The Wild Ramp, and is an advocate for local foods and farmers. She also writes the Farmer’s Table cooking column for the Gazette-Mail’s Metro section. Susan can be reached by email at mudriverpottery@aol.com.

vegetable oil (add a spoonful of bacon grease for flavor)

Dust both sides of tomatoes with salt, pepper and flour.

Coat in breadcrumbs or cornmeal.

Pour about ½-inch of oil in a large skillet.

Heat over medium heat to 360 degrees.

Fry tomatoes in batches until crisp.

Drain on paper towels. (I like to sprinkle the slices lightly with J.Q. Dickinson Smoked Salt or Ramp Salt for flavor.)

Place two tomato slices on a bun and top with cheese. (The cheese can be melted under a broiler, if desired.)

Top with  two slices of bacon, lettuce, mayonnaise and onion, if desired.

Cost of Thanksgiving dinner slightly down this year