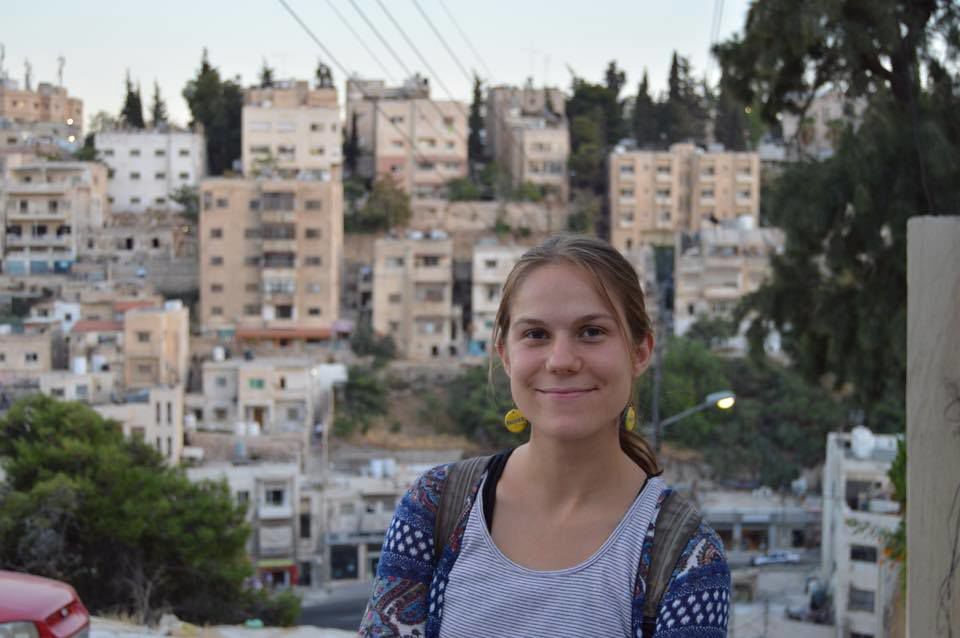 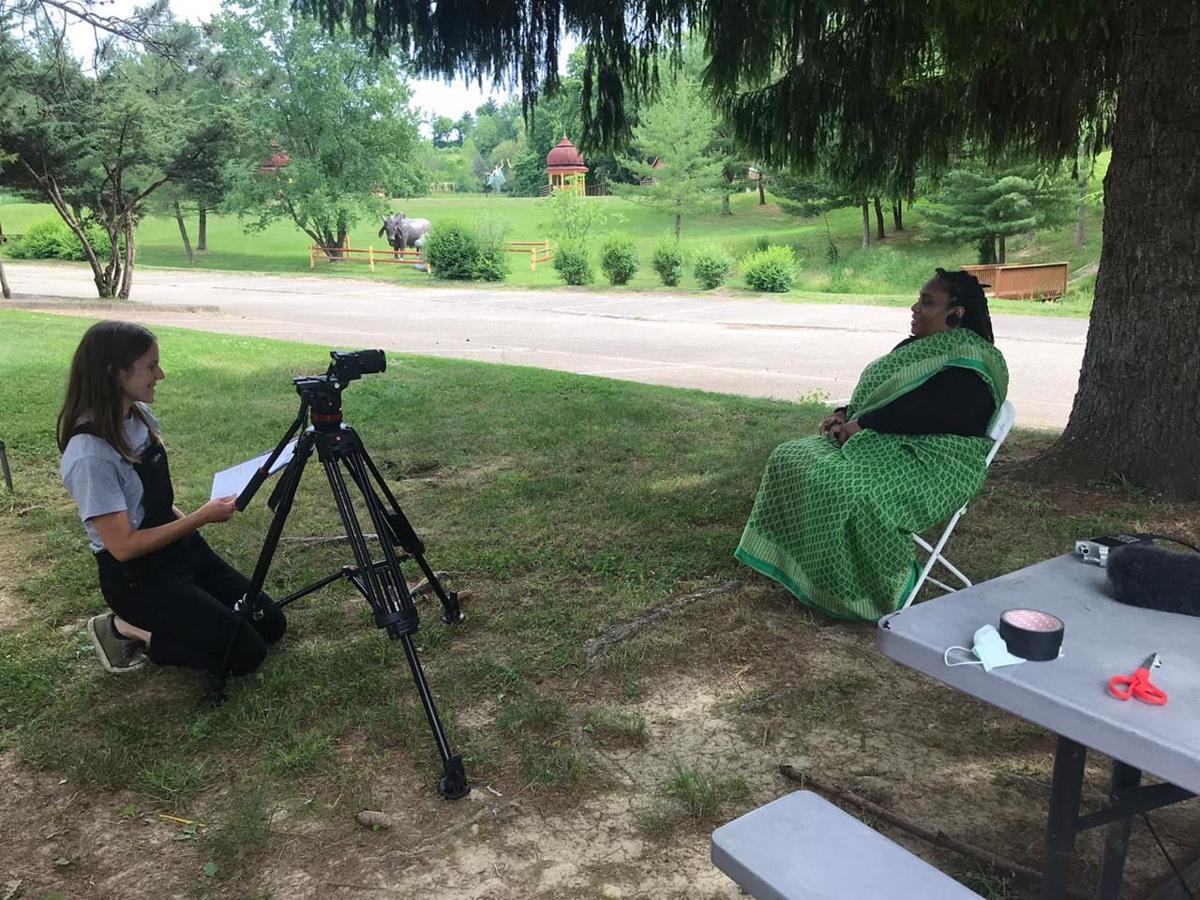 “American Portrait,” a storytelling initiative by PBS, sent storytellers like Clara Haizlett out to collect the thoughts and words of residents to create a mosaic of what it means to be an American in 2020.

“American Portrait,” a storytelling initiative by PBS, sent storytellers like Clara Haizlett out to collect the thoughts and words of residents to create a mosaic of what it means to be an American in 2020.

Almost 50 years ago, the Public Broadcasting Service (PBS) first went on the air. Over five decades, the television network introduced America to Elmo and “Mister Rogers’ Neighborhood,” as well as “Antiques Roadshow” and “American Experience.”

As part of the network’s plan to celebrate the milestone, this year the network launched a 50th anniversary storytelling initiative called “American Portrait.”

The project pieces together pictures of life in America drawing from a wide range of voices representing people from all over the country.

Rebecca Blumhagen, the artist outreach producer for “American Portrait,” explained, “It starts as this website of user-generated content.”

People from different parts of the nation send in short videos to pbs.org/american-portrait, answering a particular question about work, home, life or what it means to them to be an American.

“The goal is to get as many voices as possible to weigh in on the same 18 questions,” Blumhagen said.

But the questions ebb and flow, she explained.

“They add new questions, but the goal is to complete a comprehensive portrait of America and what it really means to be an American today.”

Along with user-submitted videos, the production team for the project reached out to filmmakers and photographers in every state to collect additional stories.

“We were looking for an artist’s perspective,” Blumhagen said. “We also looked at it as a way to reach out to people who might not have access to the media to submit their stories or who might not even know about the project.”

This could be anyone from elderly Americans in rural America, insular religious groups, people living off the grid or even people who don’t generally watch PBS.

As part of her contribution to “American Portrait,” the 22-year-old Brooke County native highlighted a gay farmer reflecting on what it means to be loved, a Black dad worried about his kids’ relationship to Blackness and a woman living in the Hare Krishna community of New Vrindaban in Marshall County.

Blumhagen said, “Clara wanted to include five people she thought represented a side of West Virginia that people might not know about.”

“Except for the Hare Krishna woman, I knew everyone personally,” Haizlett said.

A lot of that was logistics and safety.

Finding interesting West Virginians for the project wasn’t difficult, but finding West Virginians willing to talk with a stranger during the early days of a quarantine seemed harder — and Haizlett had a narrow window of time, only about two months to get the job done.

Besides, these people mattered to the story.

“I found them very personally inspiring and knew that their stories and voices were interesting and unique,” Haizlett said.

The WVU grad calls herself a storyteller, but said she’d always gravitated toward writing.

“As a kid, I made little newspapers for my family, documenting family drama.” She laughed and added, “It was like spying on my sisters and talking to their boyfriends — nothing too sinister.”

She had a natural curiosity and a tendency to challenge her own beliefs.

“As I got older, I traveled. I studied international relations in college and lived abroad for a while,” she said.

Haizlett spent a year in Jordan and Morocco. She traveled within the Middle East.

“Growing up, I heard so many negative things about the Middle East,” she said.

On some level, she said, she thought by going overseas she’d be helping to save the United States from a cultural attack on the West, but her time away from home opened her eyes. What she saw and experienced across the globe wasn’t what she’d come to believe growing up.

The experience inspired her to create “Sandstone,” a 12-episode podcast that looked at the connections and misconceptions about Appalachia and the Middle East, two places Haizlett had lived that, at least on the surface, seemed to have little in common.

The biases and misunderstandings, many of them spread through mass media, she said, don’t just affect how other people see particular groups, but how those groups, including people living in Appalachia, see themselves and others.

Blumhagen said, “I was looking for artists. Rosalie is an illustrator. She submitted a piece for that and then mentioned that she and her sister had done some pieces together for the Smithsonian.”

Blumhagen liked what she saw and invited Clara to take part in the storytelling project.

“She took it and ran with it,” the producer said. “She did a really great job.”

Haizlett said working with “American Portrait” was an elevating and inspiring experience.

Through online meetings, Haizlett met dozens of storytellers from around the country, who — like her — were struggling with the same troubles because of the pandemic. She said they shared frustrations and ideas, learned, and supported one another as they worked on the project.

“I didn’t expect the collaborative spirit of the project, not just among the stories, but with the people telling the stories,” she said.

Haizlett’s part in the project is over. Based out of Wheeling, Haizlett indicated that she’s not attached to any big projects at the moment, but is doing some freelance work and is a Folkways reporter for West Virginia Public Broadcasting.

Her contributions to “American Portrait” are currently on the website and may be part of one of the hour-long episodes scheduled to broadcast on PBS in January.

And you don’t even have to be a filmmaker. Most of the people who have submitted so far have little experience and just use their phones to say what they need to say.

“This project is about perspective and experience,” Blumhagen said. “That’s what makes America beautiful.”