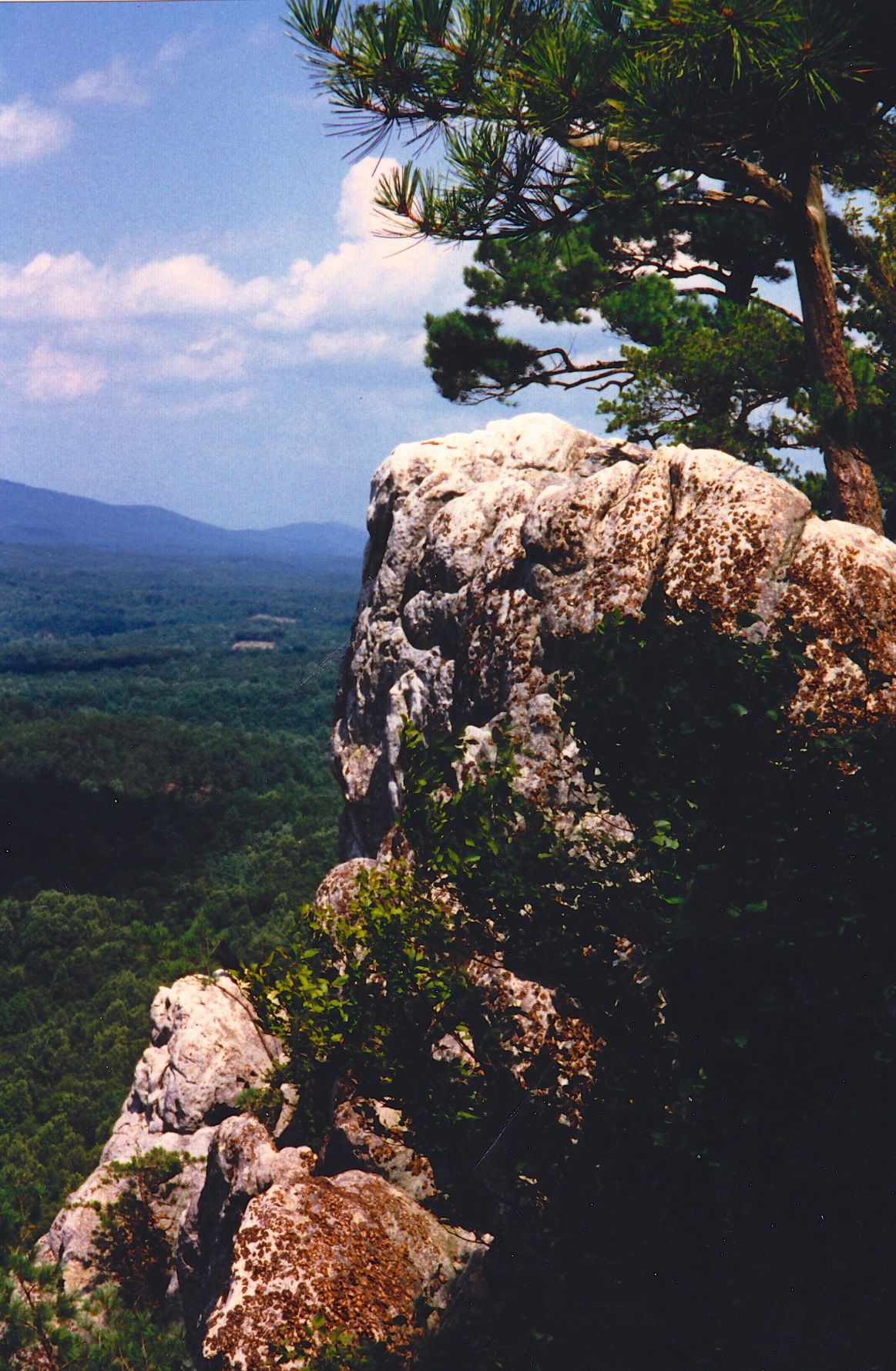 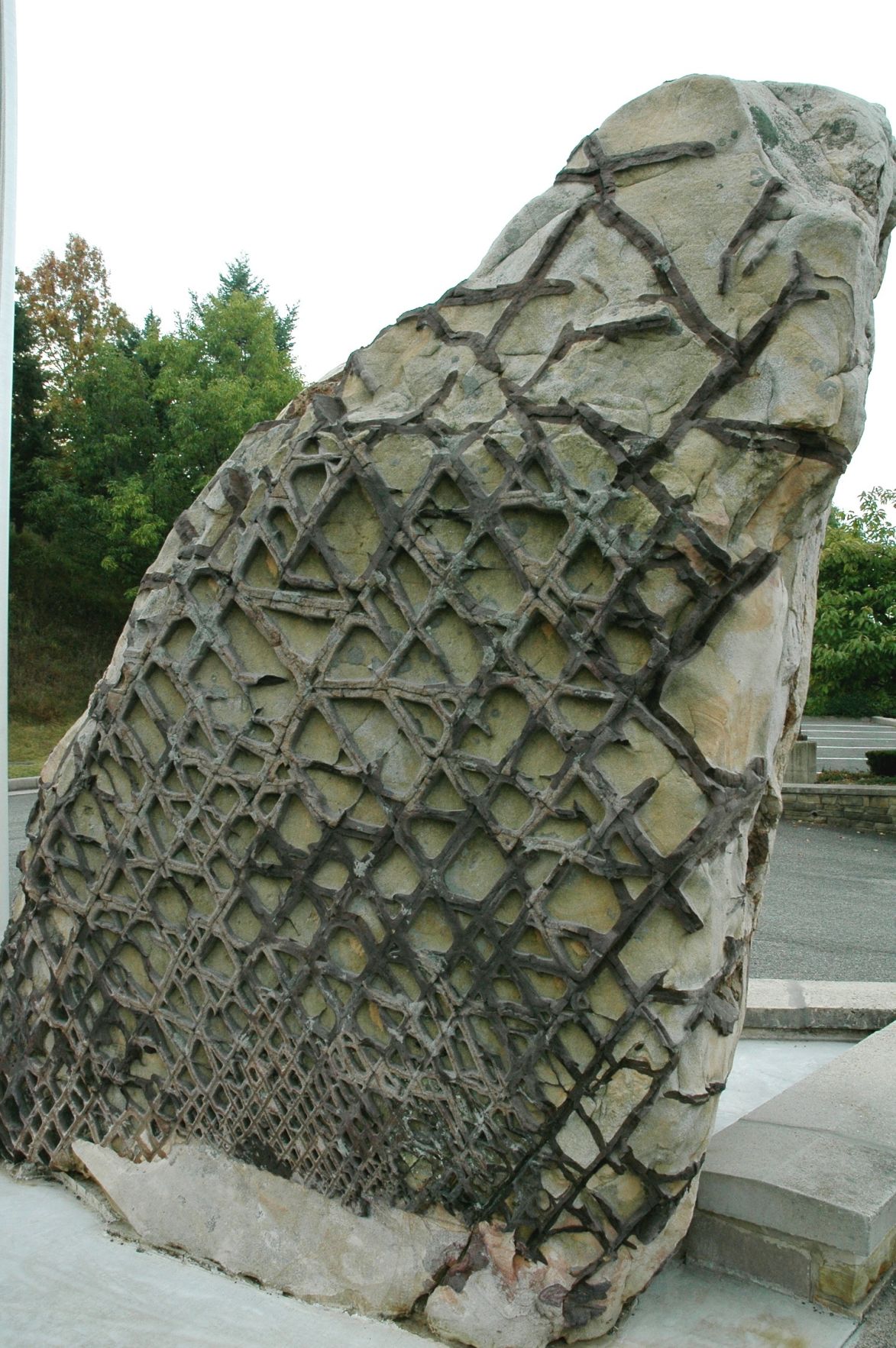 Waffle Rock is a 300-million-year-old piece of fractured and leached sandstone in Mineral County. 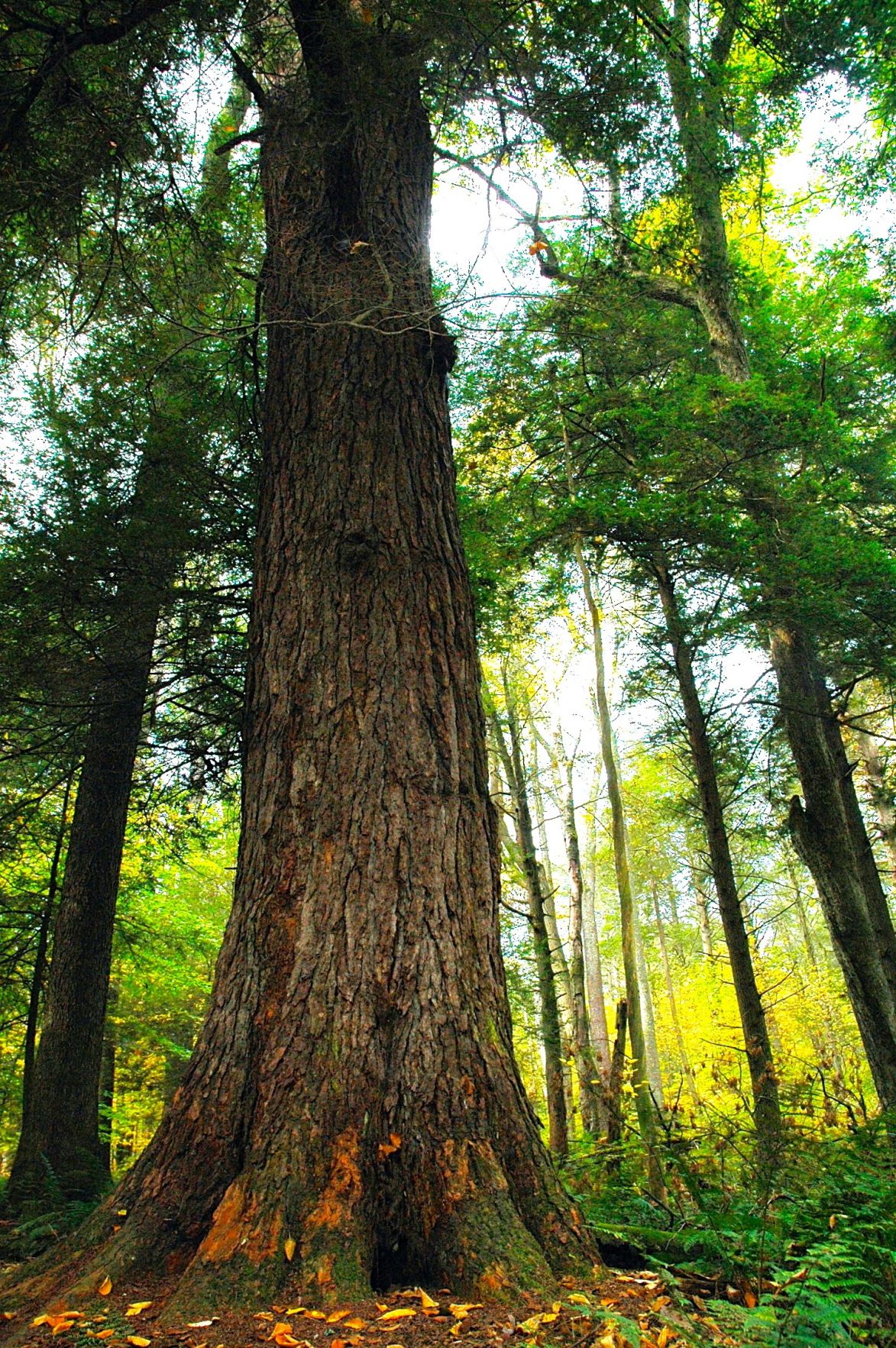 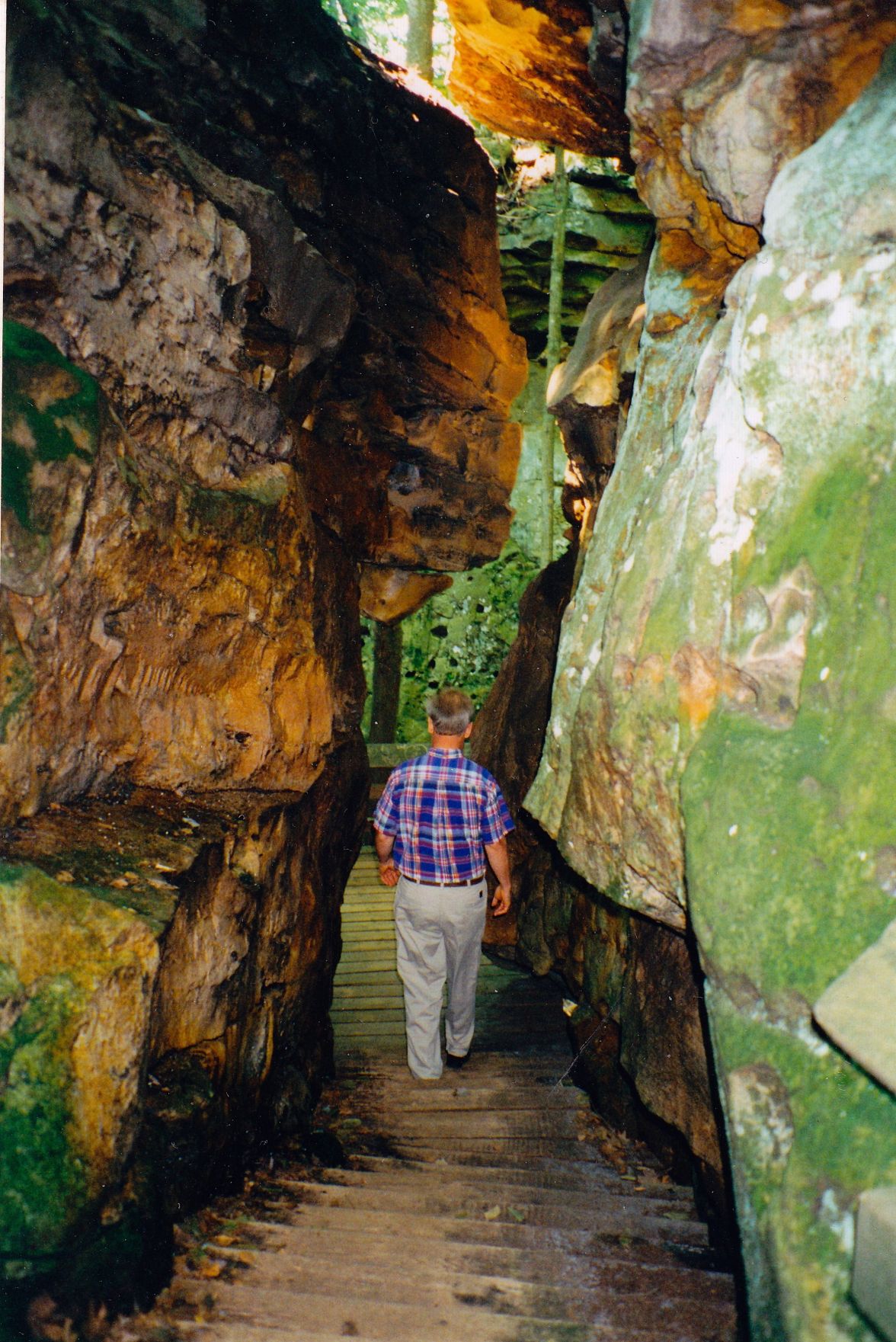 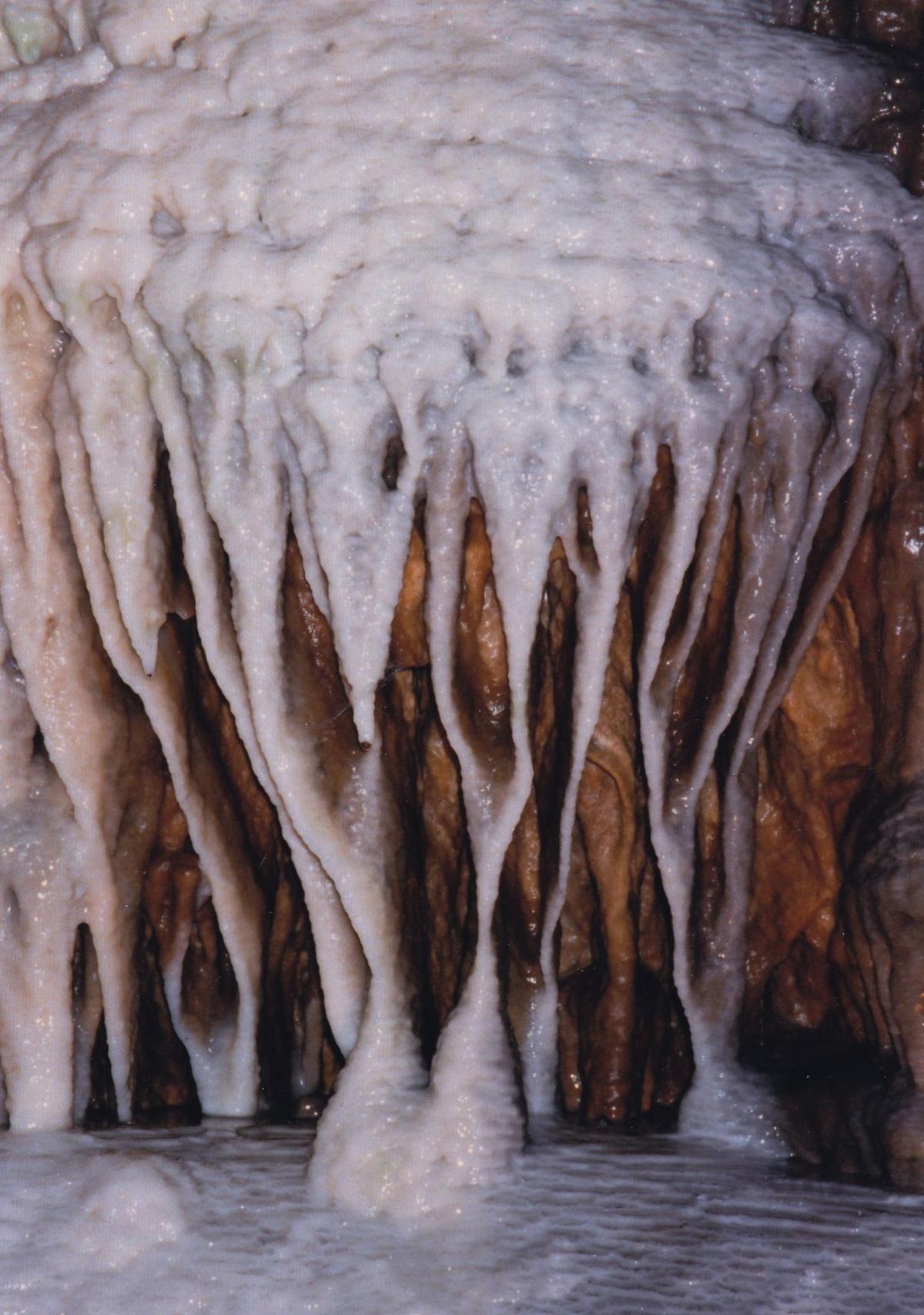 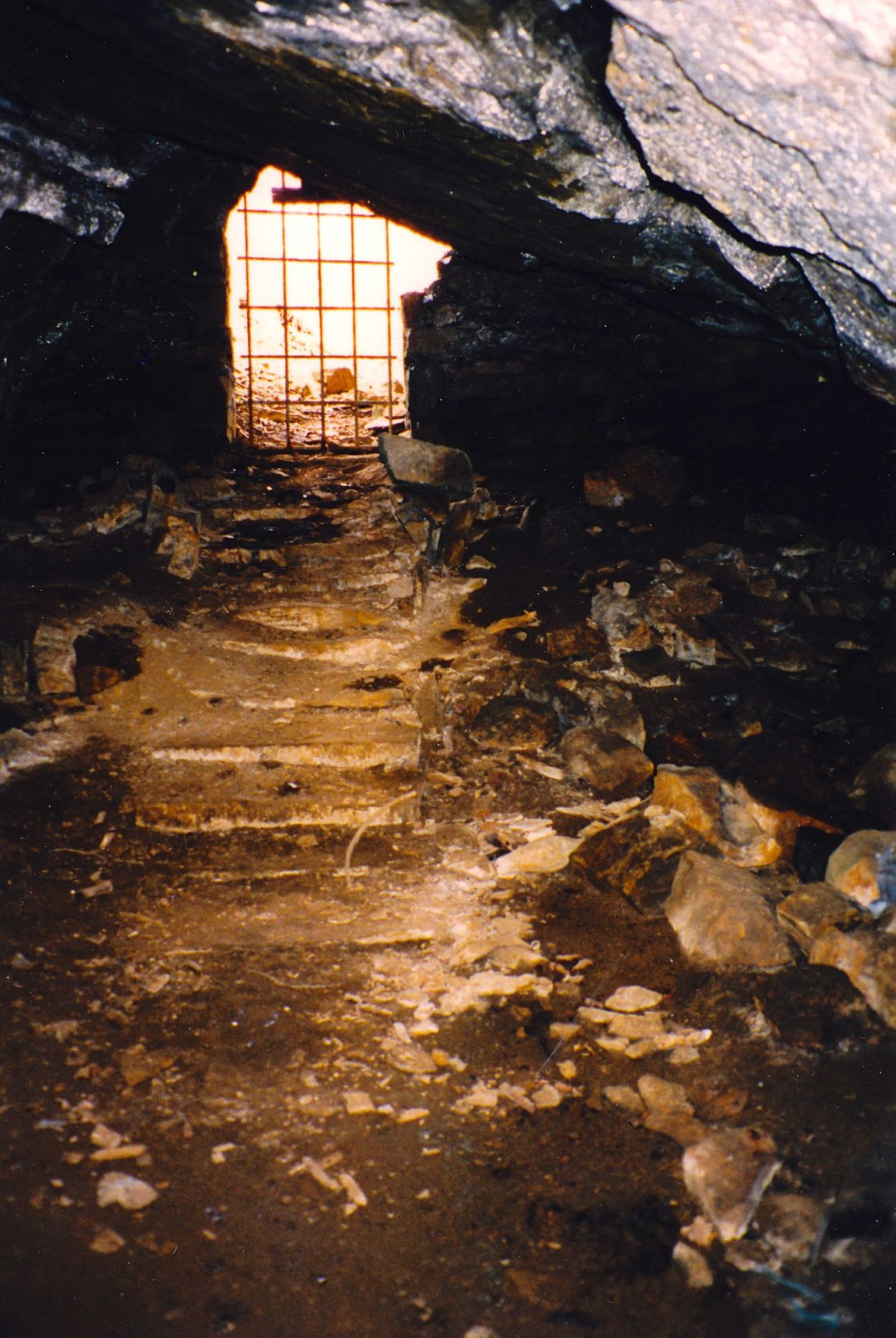 George Washington’s Cave is Charles Town’s natural basement. Today, permission is required to squeeze past the barred door and make your way to the signature in the back room. 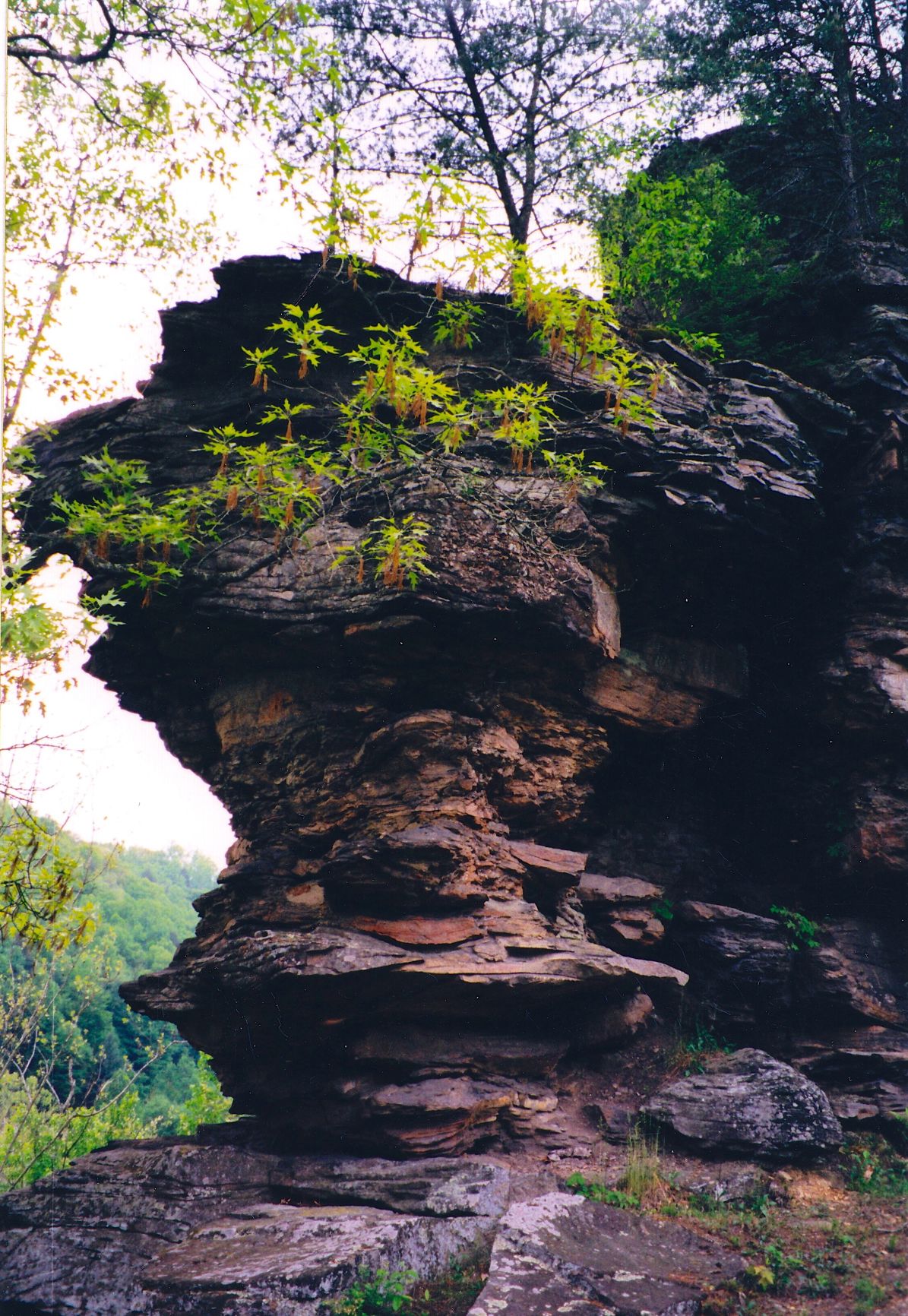 Waffle Rock is a 300-million-year-old piece of fractured and leached sandstone in Mineral County.

George Washington’s Cave is Charles Town’s natural basement. Today, permission is required to squeeze past the barred door and make your way to the signature in the back room.

Over countless millennia, nature’s forces have made West Virginia a one-of-a-kind place, a state in constant homage to natural quirks and deviance. Here is a sampler of some of the wonders that remain:

Everyone knows about Mother Nature’s over-achievements — the New River and Seneca Rocks.

The New River carves a 14-mile gorge through 330-million-year-old sandstone, making it second in geologic age only to the Nile River. It is one of only three North American rivers that flow “uphill” — south to north. It is also deviant in being the only river that rises east of the Eastern Continental Divide then crosses it to empty eventually into the Gulf of Mexico.

The New River Gorge is a wonder in its own right, plunging up to 1,300 feet deep and a mile wide. Today, 53 miles of river, cliffs and gorge are protected as a national river, and there are 1,400 documented rock-climbing routes.

Over the past 400 million years or so, natural forces eroded away a geologic fold so nothing but a three-pronged mountain root remained. Called Seneca Rocks, it is more than 900 feet of Tuscarora sandstone. Then, with no warning on Oct. 22, 1987, the 25-foot chimney of hard rock that made up the third prong fell, disappearing forever.

One might ponder whether the 10,000 climbing pins left in the ancient cliffs that map out 375 major routes lessened the great rocks’ great karma.

Although not in Seneca’s class, there are other rock wonders to visit.

The main street of Pineville would be directly on the rapid-filled Guyandotte River if it weren’t for the dramatic 100-foot pinnacle of layered sandstone that sits in the middle of town. Called Castle Rock, it has two levels. The first, reached by 55 uneven steps carved from the rock, is a plateau with a picnic table and walkway around the base.

Just east of Bramwell is Pinnacle Rock, a 364-acre state park built around a 2,700-foot remnant of an ancient geologic fold. Climbing a rugged stone staircase nearly to the top, you are rewarded by a panoramic view of the swath of mountains along the Virginia border and Jefferson National Forest.

Raven Rocks is 1,230 feet on North Mountain. A giant Oriskany sandstone outcropping on a boulder-strewn peak populated by giant black turkey buzzards, it provides a spectacular view of the rolling countryside of Hampshire County. The rock formation is part of the 149-acre Ice Mountain Nature Conservancy area designated a national natural landmark in 2012.

Historic reports claim ice was cut year-round at Ice Mountain, described by one writer as “a huge sandstone refrigerator.” Samuel Kercheval, 19th-century author of “The History of the Valley of Virginia,” described “pure and crystal-looking ice, at all seasons of the year ... in blocks of from one or two pounds to fifteen or twenty pounds in weight. If this be true, it renders this place still more remarkable and extraordinary. The order of nature in this immediate locality seems to be reversed; for when it is summer all around this singular spot, here it is covered with ice of winter and vice versa.”

Contemporary descriptions claim there are about 60 small vents and openings at the base of a 1,250-foot rock talus that release cold air all summer with ice present well into May. On my trip to the rare and sensitive cold-producing mountain slope along the North River in Hampshire County, I found the ice to be nonexistent and the chill to be far less dramatic when I stuck my hand into one of these vents.

It looked like an animal burrow surrounded by clusters of misplaced arctic flora — bunchberry, Siberian prickly rose and twinflower — all in their lowest elevation and southernmost location. Allegedly 38 degrees, it felt no colder than good air conditioning. I found no ice. No core samples have ever been taken and no one knows why the area is cold producing.

Walking the boards is a popular wonder in Pocahontas County.

The 107-acre Beartown State Park is well disguised from its entry road to the initial stretch of park boardwalk. There are few hints of the remarkable assemblage of house-size boulders and astonishing rock formations broken from the sandstone cap of Droop Mountain. Hemlock and rock cap ferns bathe the area in iridescent green complementing the pervasive quiet as the boardwalks meander around the rocks. A half-hour walk takes you in, through and out of the wind — and rain — eroded rock city, with different views at every twist and turn.

Whether bears actually hibernated among the fanciful rock formations or not is a disputed point, but the notion gave rise to the name long before the park was established in 1970.

Virgin stands of timber with trees hundreds of years old are rare anywhere on the planet, but even more so in West Virginia, which was virtually denuded of trees by timber companies during the past century. The unique feel of virgin stands — weighty, old and pure — can be experienced in Cathedral State Park, a registered natural landmark just off U.S. 50 east of Aurora, and the only stand of mixed virgin timber left in the state.

Its 133 acres includes virgin hemlocks — huge, straight, blue-green giants with lacy needles that are the remnants of vast Appalachian hemlock forests. Some are 500 years old. Very accessible, you can drive through Cathedral or walk along a forest floor where rhododendron and ferns are the only underbrush.

For tree huggers, this is the ultimate destination. These trees are so big around — up to 21 feet — it takes two people to hug one.

The state’s caves are of great recreational interest. Limestone deposits along the eastern edge of the state led to a region riddled with caves, more than a thousand in Greenbrier County alone. Many are long and large because of the unique uninterrupted quality of the limestone deposits. Today, spelunkers count more than 4,200 caves in West Virginia, with wild ones being discovered every day. The number includes six of the 25 longest caves in the country.

A commercial cave in Greenbrier County, Lost World Caverns is home to several unique features. In its former incarnation as the wild Grapevine Cave, the huge, multi-room cavern was known worldwide through the tabloid press as the original home of Bat Boy. The world also focused on the cave and its star rock formation when two guys named Bob decided to stalagmite sit in 1971. The half-million-year-old War Club is a stalagmite 28 feet tall with a base diameter of 2-and-a-half feet.

Bob Addis of Parkersburg built a platform attached to War Club and sat for 15 days, 23 hours and 22 minutes for what he claims is the Guinness World Record. His partner, Bob Liebman would bring Mexican food from Clem’s Diner in Lewisburg. The Greenbrier East High School band came to play and enjoyed the great sound in the cavern.

Although the cave was not discovered until 1942, bear bones more than 10,000 years old were found in what is now Lost World Caverns. Registered cavers can still drop 120 feet by rope through the natural entrance.

At the turn of the 20th century, workers digging post holes for a livery stable in the heart of downtown Charles Town made an incredible discovery. The limestone underpinnings of the town George Washington’s brother built were riddled with caves. The workers also discovered a 60-foot deep, 3-acre lake. Opened in the 1930s as a tourism destination, boat rides were given on the underground lake.

Today the entrance is hidden, riveted beneath a metal plate on the floor behind the lunch counter at the Liberty Street Cafe. The tiny blue building — and, it is assumed, the underground expanse — are owned by the town.

A nearby three-room cave reportedly has George Washington’s signature carved in a back room. Tradition has it that the cave was the first Masonic meeting place west of the Blue Ridge. In the 1920s the cave was a commercial venture complete with a free tour for every hot dog purchased. Today permission is needed to enter George Washington’s Cave and see the signature.

Smoke Hole Caverns boasts the world’s longest ribbon stalactite. It hangs from the cavern ceiling and weighs 6 tons. Nearby are unusual side-growing helectites and the second highest ceiling of any eastern cavern — 274 feet.

The caverns in Grant County have always been popular, used by Seneca Indians to smoke meat, by Civil War soldiers to store ammunition and by moonshiners who appreciated both the abundant supply of spring water and the single entrance cavern. Today’s visitors on guided tours can watch formations taking shape drop by drop in this still active cave.

One of the oddest natural wonders is heightened by its location just a block or two from a major shopping center in South Charleston. The boiling spring on Trace Fork Canyon Trail is one of the few burning springs remaining. Odorless natural gas makes the water bubble so no lighting a match near it. Caves, mill remains, strange rock formations and a waterfall also mark this slice of wilderness.

Jeanne Mozier, of Berkeley Springs, is the author of “Way Out in West Virginia,” a must-have guide to the wonders and oddities of the Mountain State. She and noted photographer Steve Shaluta have released the second printing of the coffee-table photo book “West Virginia Beauty, Familiar and Rare.” Both books are available around West Virginia and from WVBookCo.com.