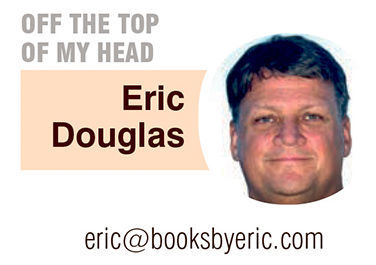 I saw the tidbit the other day that the original “Star Trek” series aired its last episode today: June 3, 1969. The show only lasted three seasons for a total of 79 episodes, including pilots.

I was just shy of 2 years old when the show was canceled. I am certain I have seen every episode, though.

There are the inevitable comparisons between “Star Trek” and “Star Wars,” which came out eight years later. I enjoyed them both, but for totally different reasons. And there is tremendous online debate about the relative virtues of one versus the other. I’m not going there.

The original “Star Trek” was sometimes campy and goofy, and a definite product of the 1960s, but I’m sure the show formed my opinion of what the world was supposed to be like. I learned that you were supposed to fight for good, even if that fight came at great personal cost. You were supposed to defend those weaker than you. And science was really cool.

In the show, the crew often got into trouble and there were bad guys aplenty. Often, it became an opportunity for William Shatner to take off his shirt and get in a fist fight. And you didn’t have to think very hard to see the parallels between the Soviet Union and the Klingons or the Romulans.

Another lesson I learned from the show was to not wear a red shirt when you left the ship (or home), but I’m not sure if that still holds true.

At the same time, the show broke down barriers. They had numerous cultures working together as a team and no one seemed to notice that someone on board looked differently than they did.

One of my favorite episodes was when two nations were fighting each other. The only difference between them was one group was white on the left and black on the right. The other group was reversed. It didn’t take a genius like Spock to see the point the show was making.

The show even broadcast the first interracial kiss on American television in that third and final season. Generally, the response to that was positive. It came a year after the U.S. Supreme Court struck down state laws banning interracial marriage.

We are living in a time when a lot of science fiction books and films predicted we would have flying cars and androids living among us. In too many ways, we haven’t yet moved beyond the warring groups from that episode who failed to see they were just alike if only the color of their skin was reversed.

Maybe we need a simpler lesson to discuss the things we should have learned in kindergarten.

Eric Douglas, of Pinch, is the author of “Return to Cayman,” “Heart of the Maya,” “Cayman Cowboys,” “River Town” and other novels. He is also a columnist for Scuba Diving Magazine and a former Charleston Newspapers Metro staff writer. For more information, visit www.booksbyeric.com or contact him at Eric@booksbyeric.com