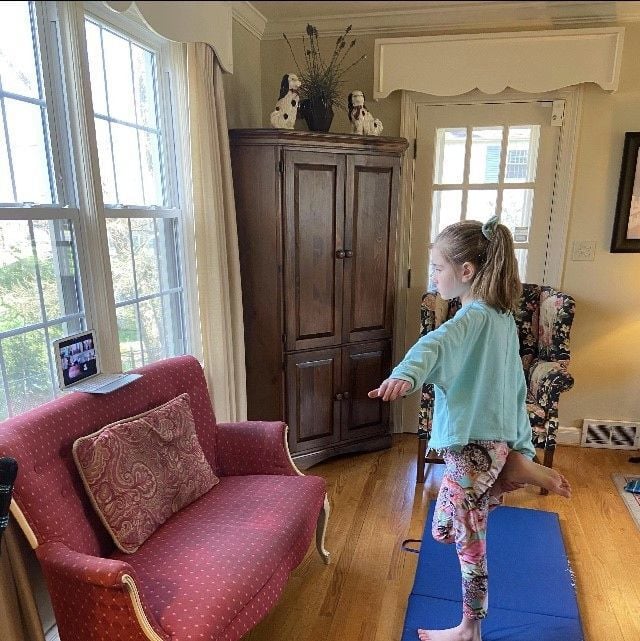 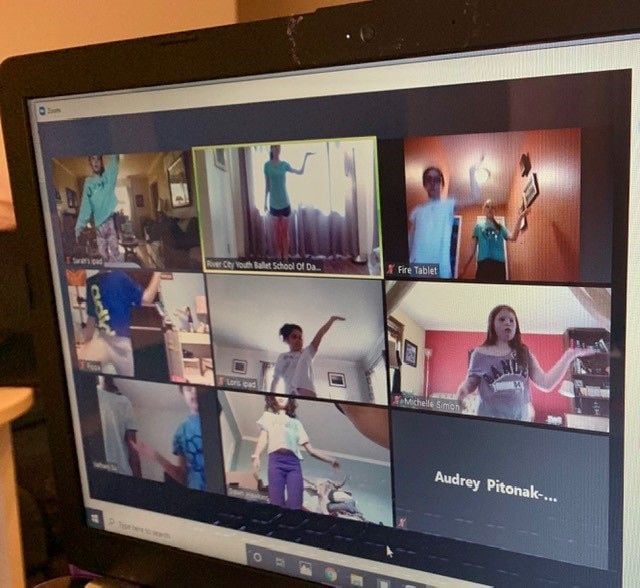 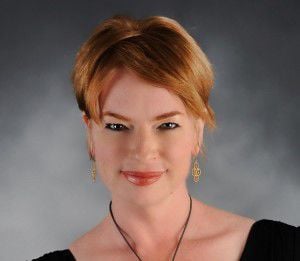 While COVID-19 pandemic precautions have ended virtually all everyday, in-person communal activities, the Kanawha City-based River City Youth Ballet Ensemble has incorporated a thoroughly modern, virtual way to keep teaching ballet and other dance moves to its students and the public at large.

The RCYBE has implemented an online curriculum through the Zoom internet-based video conferencing service. The classes are presented at no charge.

“River City has offered free, online Zoom dance classes for a month now,” RCYBE Founding Director Michelle Raider Simon said. “It’s for anybody who wants to take them. We have had great numbers in attendance and overwhelming support from parents who have said how much it means to the kids.

“I’ve been offering about seven classes a week, mostly for kids, but, every once in a while, we do an adult class,” said Simon.

“I’ve been posting under ‘Events’ on our Facebook page on Sunday evenings for the classes for the upcoming week” she added.

Each class runs for 30 minutes, led by Simon and other current or former RCYBE dance instructors.

“It’s informal,” Simon said, “but I do ask when people join to have their cameras on the kids, so I know which of them are in class.

“Everybody’s volunteering their time to do this,” Simon said.

She said the classes often have more than a dozen young dancers following along on their Zoom screens.

Some adaptations from the in-studio sessions have been made out of technological necessities and limitations, she noted. “For the older [student] ballet classes, we’ve been using chairs for our barres. We’re trying to do a little more strengthening, too.”

Withrow is an alumna of the River City Youth Ballet, having joined its company at age 12 and continuing through high school. She also taught at the studio for three years before moving to Greenville, South Carolina, and still serves on the RCYBE’s board of directors.

“One of the really cool things about teaching online on Zoom instead of in the studio is that unless your student is limited in their home space, they generally have more space at home than where they might with 25 other kids in the studio,” Withrow said. “And we can have as many kids as that want to be in the classes.

“And, for instance, if I wanted to spotlight someone, I can take myself off the bigger screen and focus on a student. I can put them on a bigger screen, and the other students can see them do a particular dance move. I can have each of them show off certain aspects of the dance class.

“It’s very funny. I thought it would be much more difficult than it was. It’s really a great way to teach class — you can mute everybody and not have any background noise except for your music playing for the students. I think it’s been a wonderful way to transition through this technology, rather than them being stuck at home, not getting any lessons or exercise.

“The main thing is keeping the kids moving and making sure they’re still getting all the physical activity they would be getting in a studio class. It breaks up their day and lets them see their friends and teachers. Where everybody’s social distancing, it gives them their community. To be honest, to me, RCYBE is more than dance classes — it’s a family. I think it’s made the social distancing more bearable,” Withrow said.

Nine-year-old Grace Long, the daughter of Jim and Sarah Long of Charleston, has become a Zoom zealot of the classes, her mother said.

“Grace has been taking classes at River City since she was 3,” Sarah said. “She loves dance. Dance is her thing and her life, and this has been a lifeline for us during the quarantine. Socially, it’s been hard to be apart, and these classes keep her connected with her craft and her peers and her dance teacher.”

Grace has enjoyed the online experience so much, Sarah said, that she’s added Broadway and jazz dance classes to the two, weekly ballet classes she takes at home.

“I think in the fall, I’ll have to add those to the list [of studio classes]. Whether Michelle knows it or not, this has probably been an effective marketing technique,” Sarah said with a laugh.

Simon said she hopes to continue the online instruction until the pandemic health and safety restrictions are lifted and classes can recommence at the RCYBE studios at 4110 MacCorkle Ave., S.E., in Kanawha City.

“As long as it’s getting the kids to do something, it’s a nice little distraction for them, getting some exercise and learning something, too,” she said.

For additional information about the online classes or to register, visit the River City Youth Ballet’s Facebook page or the website, www.rcyb.org. The studio’s telephone number is 304-925-3262.