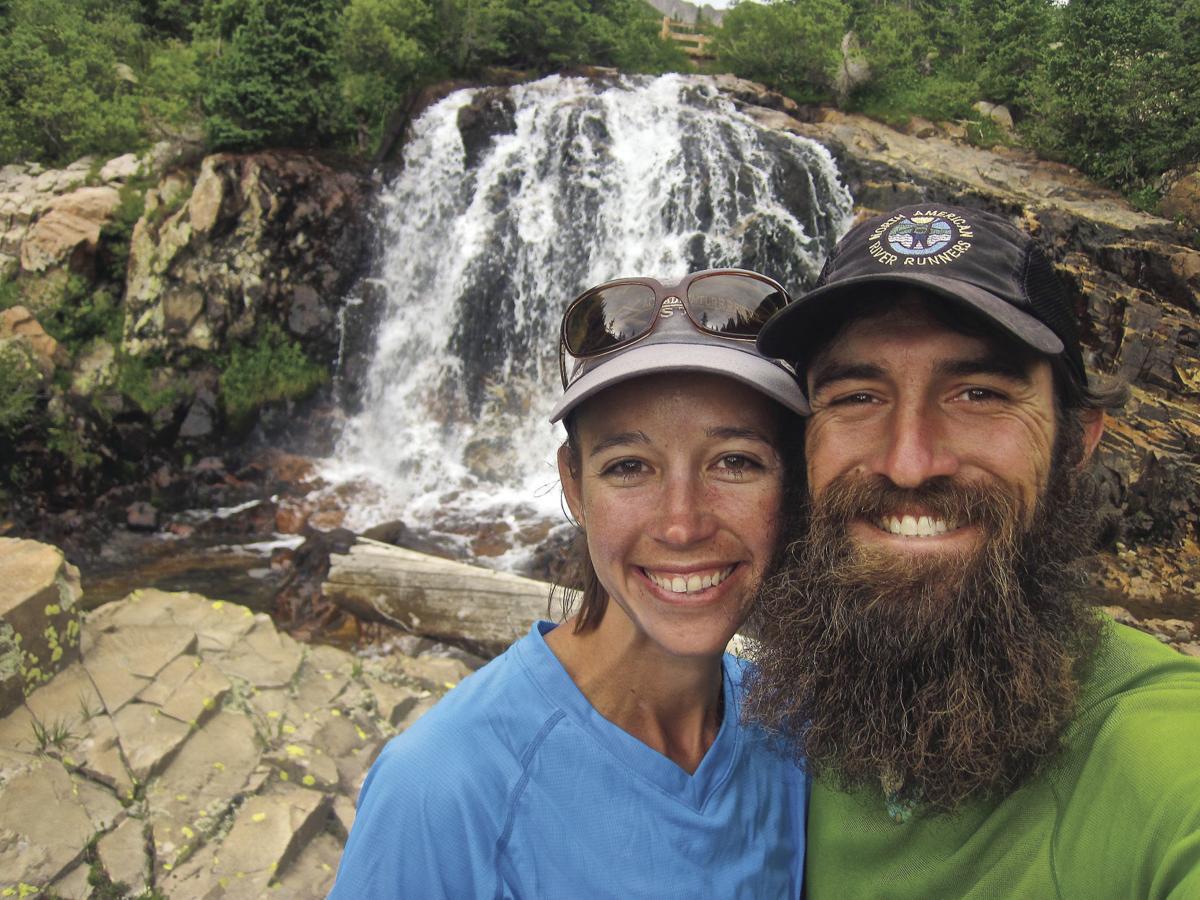 Outdoorsmen Laura and Bryant Baker have organized a new 100-mile ultramarathon, Rim to River 100, the first 100-mile run in West Virginia. The November race will benefit their nonprofit Adventure Appalachia, which helps adults and youth learn and enjoy the outdoor opportunities the area has to offer. Courtesy photo 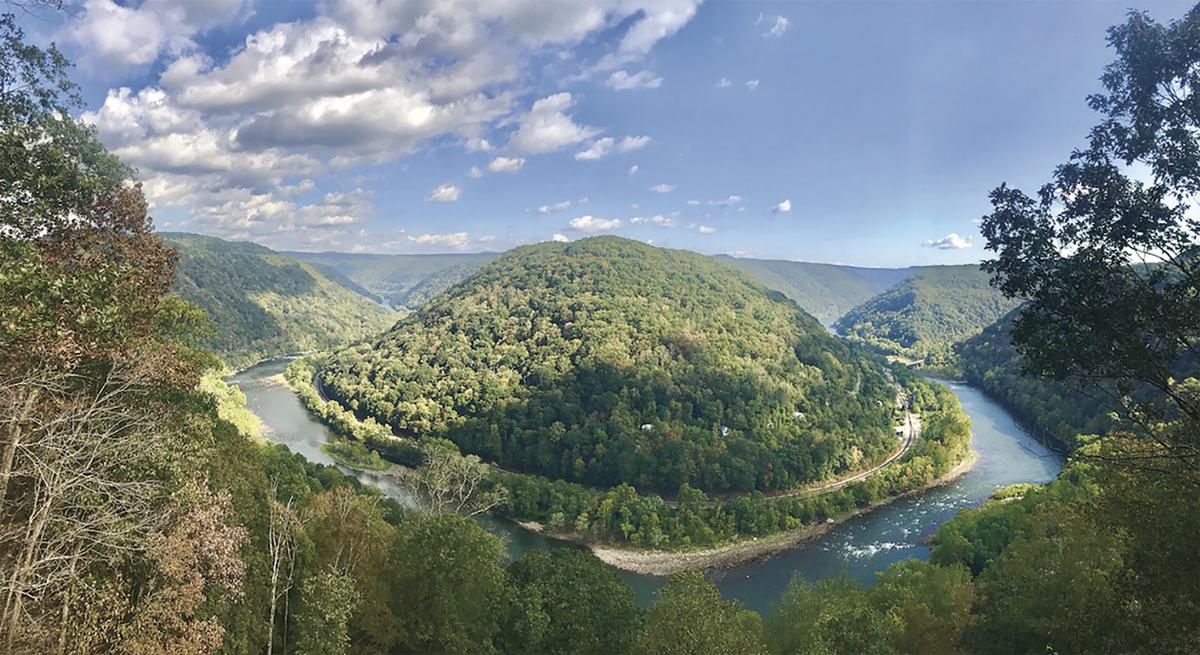 The bend in the river at Thurmond, seen on the right, as viewed from the Concho Rim Overlook, is one of the many views runners will enjoy at the inaugural Rim to River 100 ultramarathon this fall. Courtesy photo

The course map of the Run to River 100 race.

Outdoorsmen Laura and Bryant Baker have organized a new 100-mile ultramarathon, Rim to River 100, the first 100-mile run in West Virginia. The November race will benefit their nonprofit Adventure Appalachia, which helps adults and youth learn and enjoy the outdoor opportunities the area has to offer. Courtesy photo

The bend in the river at Thurmond, seen on the right, as viewed from the Concho Rim Overlook, is one of the many views runners will enjoy at the inaugural Rim to River 100 ultramarathon this fall. Courtesy photo

The course map of the Run to River 100 race.

The Rim To River 100 ultramarathon will be the first 100-mile race in West Virginia. Registrations are being accepted for the Nov. 7 endurance race.

For many runners, a standard marathon of 26.2 miles represents the ultimate test of stamina. But this fall, a true test of a runner’s endurance and skill will take place as the Mountain State will play host to its first-ever 100-mile ultramarathon.

There are other ultramarathons (any race longer than a marathon) in the state, including the 50K (a little over 31 miles) Coopers Rock, Kanawha Trace (Ona) and Haulin’ in the Holler (Eleanor) runs. There is also the 40-mile Highlands Sky (Davis) race.

But none will compare to The Rim to River 100, which will be run along the New River Gorge from as far south as Thurmond to Ansted in the north.

The race is scheduled for Nov. 7.

The 100-mile endurance race is the brainchild of avid trail runners and hikers Bryant and Laura Baker of Fayetteville. Famous paths they’ve completed include the Appalachian Trail and the Colorado Trail. But they are equally happy kicking up dirt on their home turf.

Bryant has competed in five ultra races, but said that while he likes running races, “I like just going out on long runs of my own and piecing together routes.”

Planning the route for the Rim to River 100, has taken time.

“It has been a long process of years and years, piecing together trails and thinking of how it can work. It has finally come together.

“One of the harder challenges is figuring out ways to connect some of the highlights of the New River Gorge,” Bryant said.

This means including “primo spots with amazing views” in the course using single track and rail trails as much as possible, while minimizing the use of roads.

The race will begin at Ace Adventure Resort, making its way around the resort area before heading across the river to the abandoned town of Thurmond. The course will then cut back across the river north to Fayette Station, crossing the river just south of the New River Gorge Bridge.

From there, it will continue north to the town of Ansted, which will serve as the turnaround point before heading back south along mostly the same route for the second half of the race, ending at the resort.

“In the span, we will utilize a little over 82 miles of trail,” Bryant explained. “And those trails are connected by either dirt or paved roads.”

The run will benefit the nonprofit Adventure Appalachia, an organization founded by the Bakers to help provide outdoor educational and enrichment experiences for adolescents and adults.

“We try to eliminate barriers that keep local youth and adults from getting out and doing all of the awesome guided outdoor adventure activities that we have here,” Bryant said.

“Adventure Appalachia is set up to be a funding mechanism to connect certain groups, be it through the school districts or various groups throughout the communities, to give folks the ability to go on rafting trips or climbing trips.”

Putting together an endeavor such as the Rim to River 100 has been a challenge — not just planning the route itself, but making it a community effort.

“It can feel pretty daunting at times, but I know the trails and know the area,” Bryant said. “I know what we are trying to accomplish with it. I really want this to be a community-oriented event. So, we’re bringing in folks from the community, be it Oak Hill or Fayetteville or Ansted.”

According to Maura Kister, owner of Waterstone Outdoors in Fayetteville, businesses have already signed up to help with the numerous aid stations that will be located along the race.

“We’re getting local businesses and groups involved with people volunteering,” Bryant said. “The hardest part is getting the word out and organizing everybody who’s wanting to help. The response has been pretty awesome from those wanting to volunteer and get involved in the event.”

The aid stations, which will be spaced out from five to nine miles, will help in providing the community and local businesses a way to get involved in the race.

“It’s just a fun way for the community, for people who aren’t going to go run a hundred miles, to still be able to be involved in an event,” Bryant said.

The stations will not only be an important part of the race, but a necessary one for the runners taking part in such a long, grueling event.

“Getting to an aid station can totally take you from just the lowest place to feeling just back on top of the world again,” Bryant said. “You get to a spot and you’ve got all of this enthusiasm and people wanting to help you out and trying to get you what you need. Hearing people hooting and hollering and cheering you on just gives you that boost to get to the next (aid station).”

The challenge of running 100 miles

For Bryant, running in an ultramarathon has been one of his greatest challenges.

“Running an ultramarathon, for me personally, has been one of the most empowering things I have ever done,” Bryant said. “It’s a mix of getting yourself to a point where you can do it physically, but more then the physical is the mental aspect of it.

“The first time I ran an ultramarathon, the farthest I ran prior to that was a marathon. A buddy told me if you can run a marathon, then physically you can run a hundred miles. It made no sense to me at the time. I thought he was crazy. But he said the main difference in running 26 miles and running 100 is all in your head. It’s how you approach it and how you set your pace in the race.

“Once I got into doing ultramarathons and 100-mile races, I learned it was really true. It’s a lot of mental toughness, a lot of planning and preparation. You have to be in good shape and able to run, obviously. But it’s more about being able to deal with the discomfort and pain.”

Bryant said it takes most people more than 24 hours to do a hundred miles. There is a 32-hour cutoff for the race. “If you are having to move constantly for 24 to 32 hours, that itself is a task.”

All and all, the event should be a win-win for the area.

“A lot of people are seeing this as a really cool event and a way to showcase the Gorge, and what we have in our back yard,” Bryant said. “But it also has potential to be a great economic boost for the area. It’s going to bring in a lot of racers. These racers are going to be coming in with crew members to help support them through the race.

Bryant said you have to be at least 18 to register for the race, and that they already have people from their early 20s to their 60s signed up.

“The ultra-running community is going to be really pleased with the course and what they’re going to see.”

For more information about the race, go to rimtoriverendurance.com. To learn more about the Adventure Appalachia project, go to adventureappalachia.org.