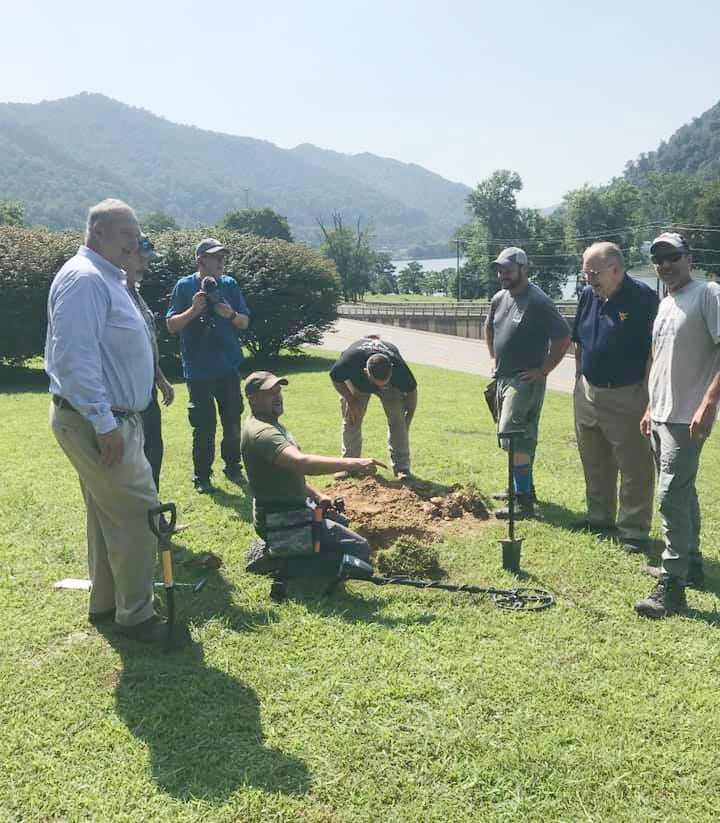 Members of “Diggers” from the National Geographic Channel (including “King George” Wyant, kneeling) and Garrett Metal Detectors located the time capsule that was buried in Montgomery in 1991 on July 27. Observing the workers are Montgomery historian Les Thomas (at far left) and Dr. Carl Kennedy (second from right). Courtesy photo 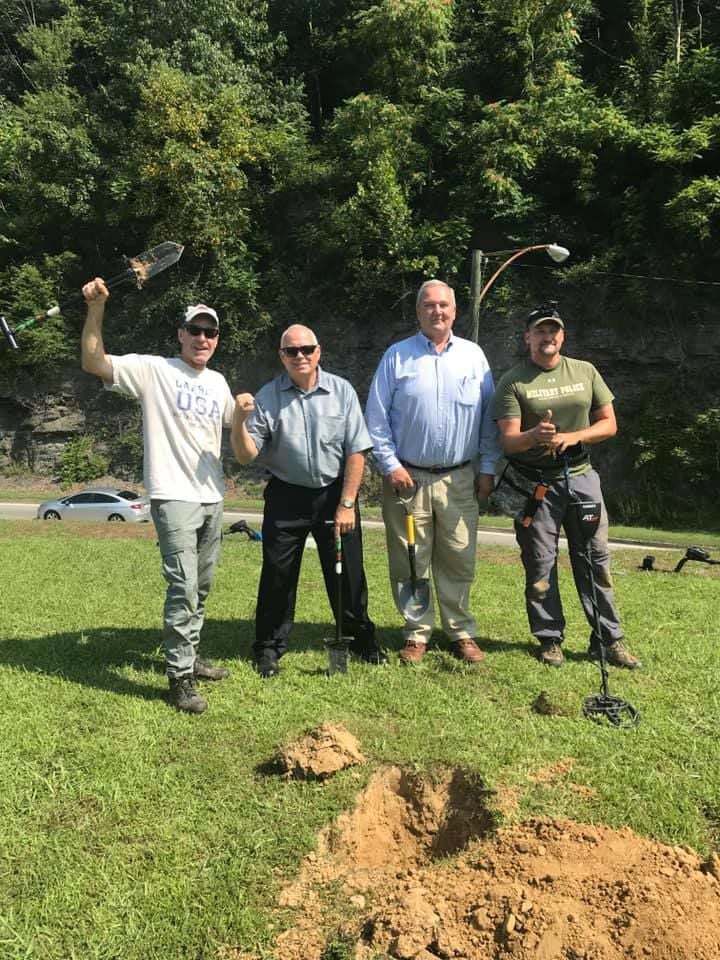 Members of “Diggers” from the National Geographic Channel (including “King George” Wyant, kneeling) and Garrett Metal Detectors located the time capsule that was buried in Montgomery in 1991 on July 27. Observing the workers are Montgomery historian Les Thomas (at far left) and Dr. Carl Kennedy (second from right). Courtesy photo

In May 1991, during its centennial celebration and festivities, City of Montgomery officials and citizens buried a time capsule on the eastern end of the city that was to be opened 25 years later.

Time passed — as it, inexorably, does — and the buried, historical treasures remained dormant, unexcavated and unopened in the ground.

It seems the capsule had been — well, misplaced, according to Montgomery’s mayor, Greg Ingram.

“It was to be opened 25 years later. Well, we couldn’t find it, so we were three years past due,” Ingram said last week from his office at Montgomery City Hall.

“I received a phone call from ‘Diggers,’ the National Geographic Channel people, who were in the area for the World Scout Jamboree at the Summit Bechtel Reserve,” Ingram said. “They were looking for a small town nearby to visit for their show, and Jim McCormick told them about us. They were in town, called and said, ‘Hey, we’d like to dig around your town and help you find any coins or old scrip’ — and they did find some.

“I said, ‘I have a time capsule we couldn’t find.’ They showed up and did a short interview in my office, with Dr. Carl Kennedy and Les Thomas, the president of the history committee. Carl had a general idea of where the time capsule was, but he was about 10 feet off.

“They started looking, and, sure enough, they found it,” Ingram said. “We dug to the top of it. It is an infant casket. The top appears to be brass or bronze. It appeared to be sealed pretty well and down deep enough that it was dry, so everything inside should be dry.”

The time capsule was left underground and a plughole was placed on the July 27 discovery.

Along with attending the relocation effort last month, Kennedy, who has practiced dentistry in Montgomery for decades, was present for the placement of the capsule in 1991. The capsule was originally to be opened in 50 years, but, Ingram said, “Carl said, ‘Most of us will be gone in 50 years; some of us would like to be here in 25 years to see it.’”

“I think my wife wrote a letter for it,” Kennedy, 86, said. “I don’t think we put anything of value in there. There were notes and things that would be interesting 25 years — now 28 years — later. My families and two others donated flagpoles, and the mayor then, Jim Higgins, wore tails and a top hat. Probably the funniest thing that happened was with Betty Carson, who was directing it. The story is, she fell in the hole but climbed out of it all right.”

Plans are being made to exhume the time capsule later this year, possibly in October, Ingram said.

“September is a very busy month for Montgomery,” with festivals and other events, the mayor said. “What I’d like to do, although I haven’t approached City Council about it yet, I would like to excavate the thing one day and open it up in one of the Tech buildings later.

“Nobody knows what’s in it,” Ingram said. “It might be a letter to the mayor, I don’t know. It’s going to be interesting.”

The mayor added that the city plans to replace the time capsule with a new one filled with items of 2019.

“What we plan to do is have another one ready to go back in the same hole for the next 25 years,” Ingram said.

A marker will be placed atop the new time capsule to have ground-level proof of its location, he added.

Updates on the exhumation of the time capsule will be posted on “Montgomery WV” Facebook page.

According to National Geographic, “Diggers” debuted on the National Geographic Channel in early 2013. Hobbyists/metal detectorists “King George” Wyant and his friend, Tim “The Ringmaster” Saylor, travel around the United States seeking lost relics of history. They are invited by landowners, historians and archaeologists “to unearth history that would have otherwise been forgotten.”