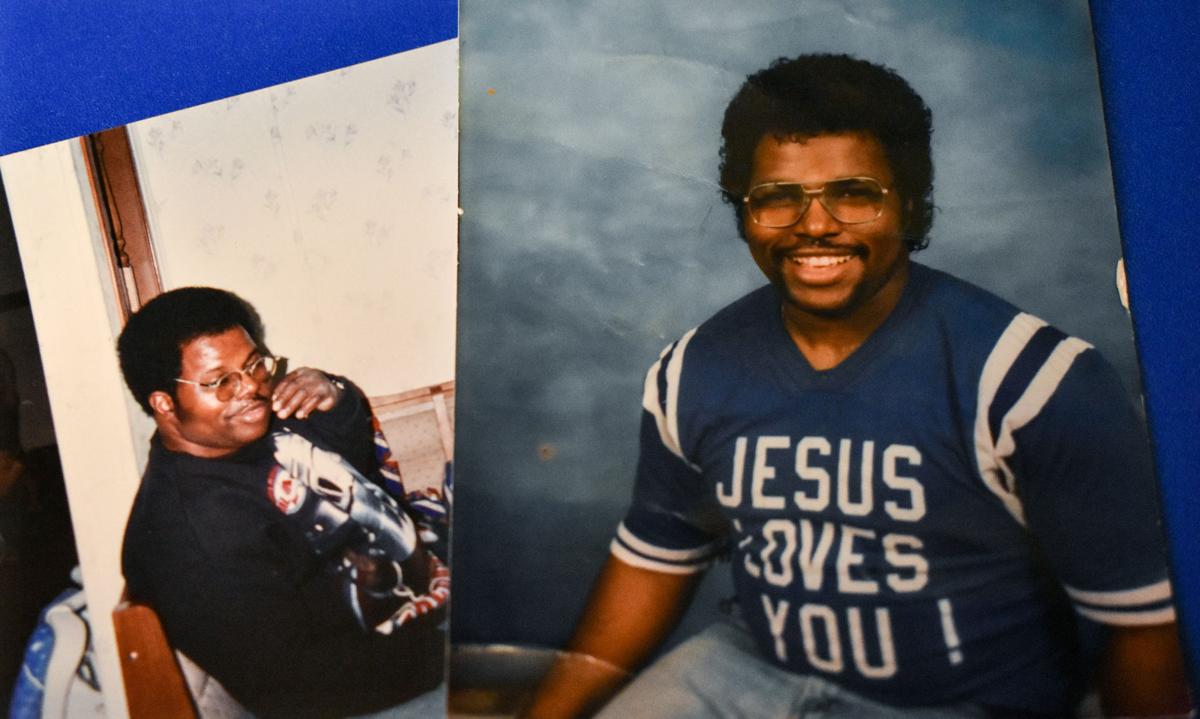 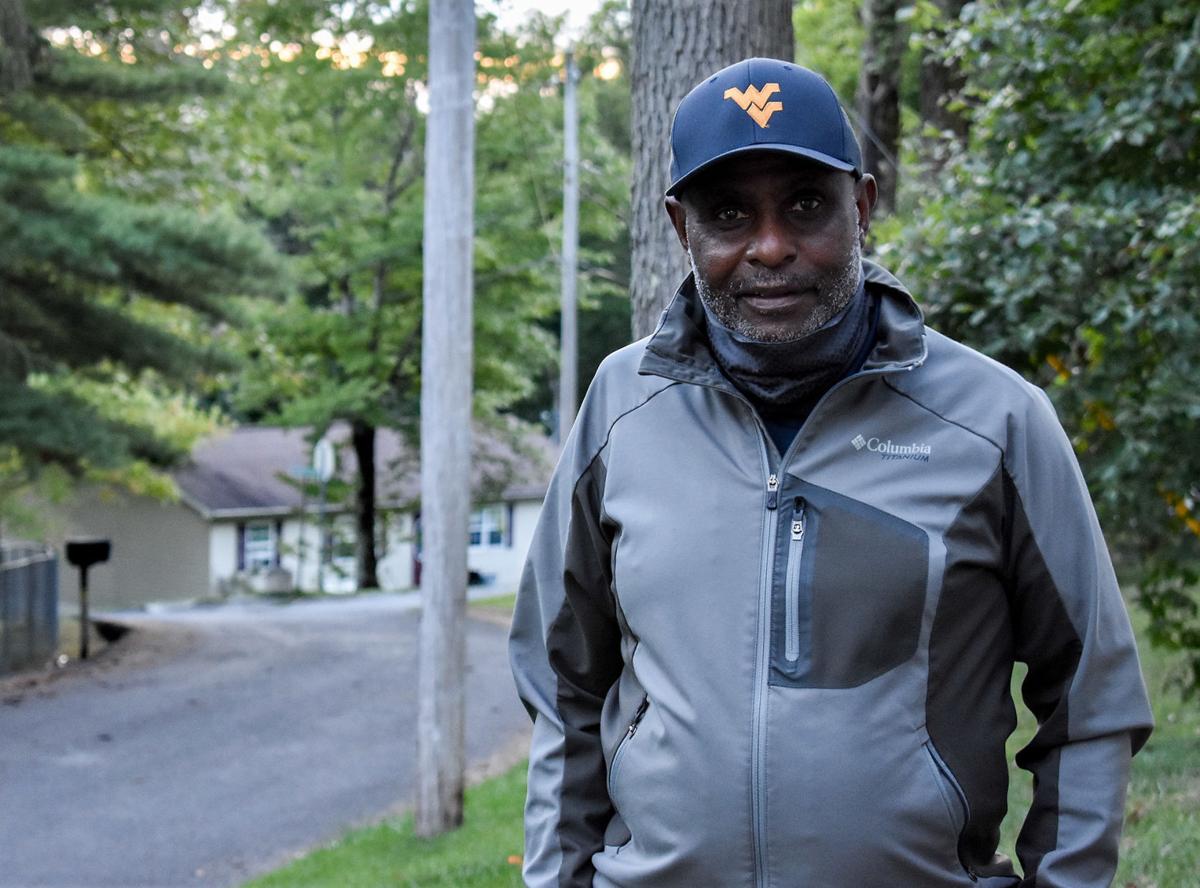 Wallace Hood, Rick Hood’s older brother, in the yard of his Morgantown home. Wallace said he was close to all his brothers, but he was closest to his younger brother Rick. 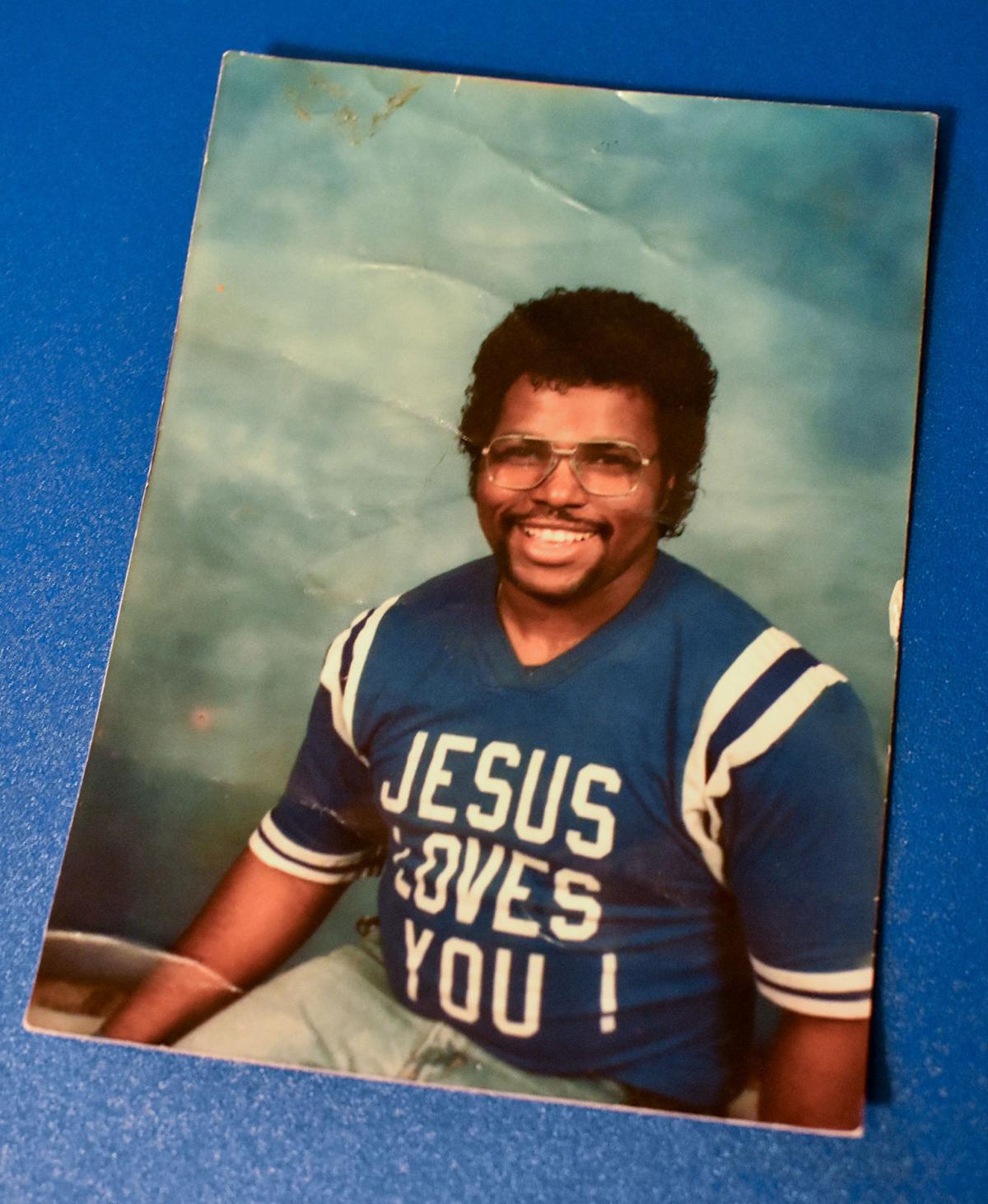 Rick Hood attended Morgantown High School, where he was a standout wrestler and football player. 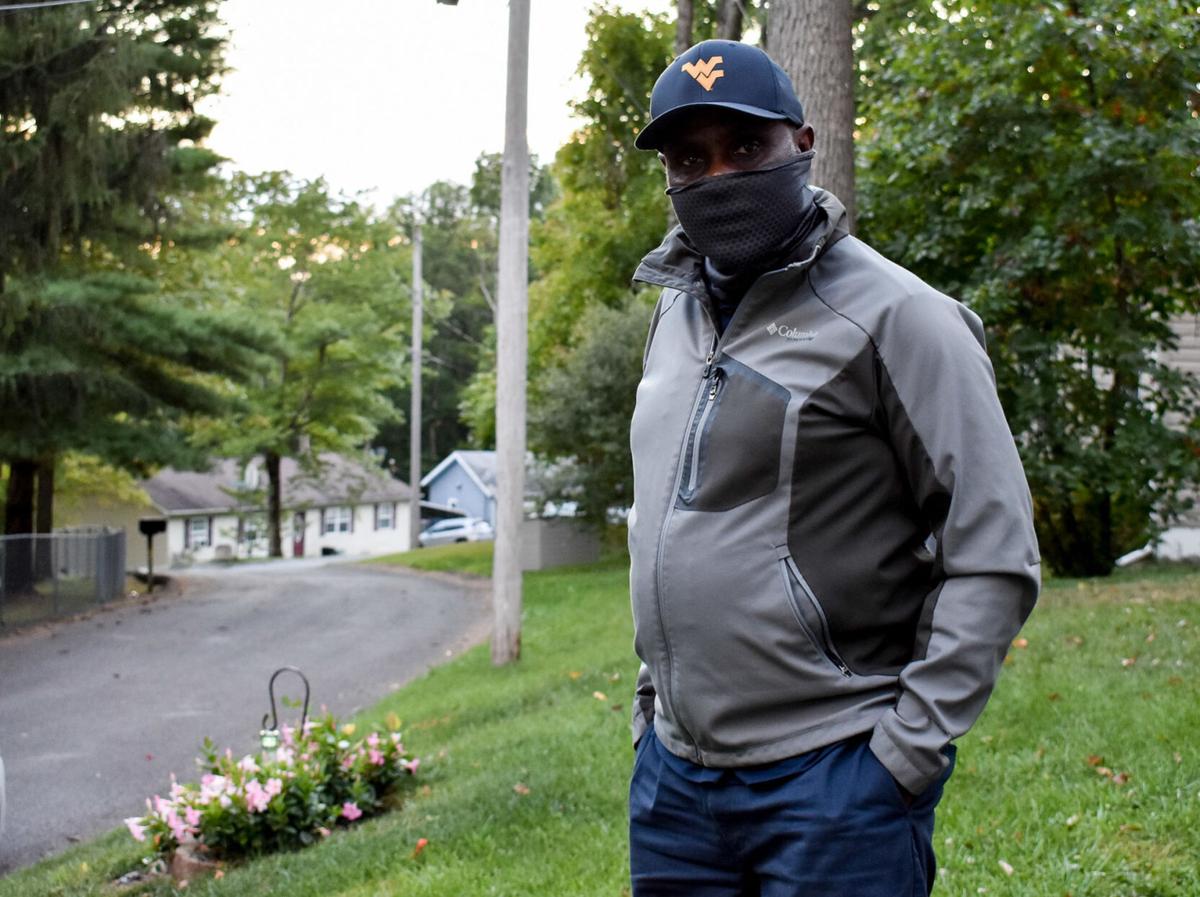 Wallace Hood regrets the closure he never got with his brother. He said being forced to watch through video chat from home while his brother laid dying in the hospital is sometimes too much to bear. 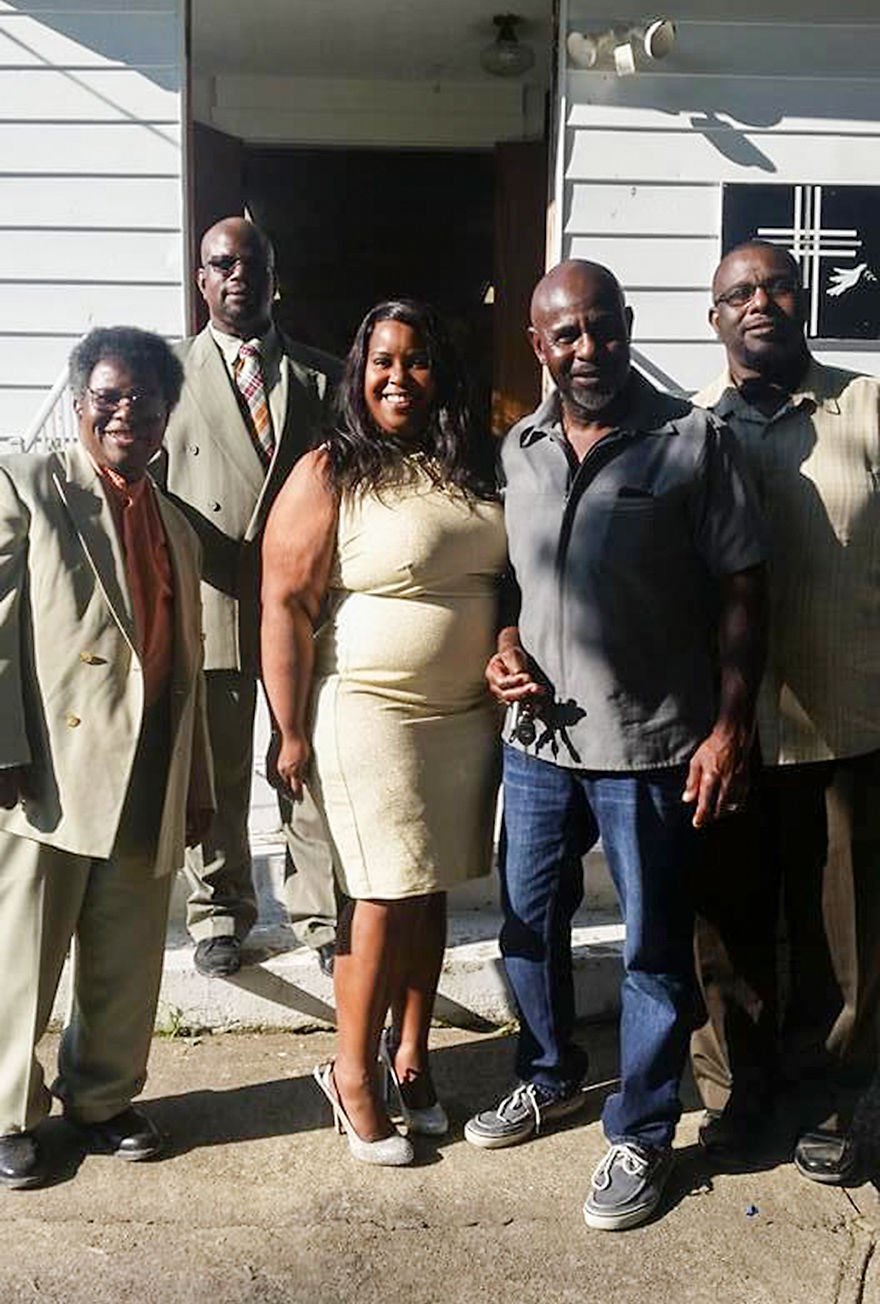 Wallace Hood, Rick Hood’s older brother, in the yard of his Morgantown home. Wallace said he was close to all his brothers, but he was closest to his younger brother Rick.

Rick Hood attended Morgantown High School, where he was a standout wrestler and football player.

Wallace Hood regrets the closure he never got with his brother. He said being forced to watch through video chat from home while his brother laid dying in the hospital is sometimes too much to bear.

He was 22 at the time of the crash that almost killed him. A pickup truck racing by hit his head while he stood next to the road with family members. A doctor said he wouldn’t survive.

Following the traumatic brain injury, he no longer could read. A local pastor enrolled him in a pastor’s training course in Oklahoma. Hood learned to read again. The crash and his rehabilitation were his testimony, the inspiration for his faith and part of the bond between him and his older brother, Wallace.

“I’m close with all my brothers, but I was closer to Rick than any of them because I was always there for him when he was wrestling, playing football when he was younger,” Wallace said. “He was always with me.”

Forty years later, a pandemic of biblical proportions did what the crash could not, sweeping away the life of Rick Hood. But his story endures.

As part of its “100 Lives” project, the Gazette-Mail is profiling Hood and others who died as a result of the pandemic in hopes of learning more about the virus and its effect on all West Virginians.

‘It was Rick; you had to know him’

Others around him wandered down wrong paths during Rick Hood’s youth, but he stayed on the straight and narrow, a standout wrestler at Morgantown High School and a three-year letterman on the football team.

“Rick was a good person. Before the accident, he was a guy who always stood aside from my other brothers,” Wallace said. “My other brothers were like ruffians, they’d get in trouble. Rick was always the person who kept a cool about him.

After high school graduation, he continued his workout regimen, boxing and lifting weights. Following the crash, Rick battled back to his former form.

As much as for his athleticism, Rick was known for his philanthropy. He drove trucks and lent a hand to people in need.

“If you need something, ask Rick ... he was just a giver, especially people around Everettville,” Wallace said. “They all knew him.”

He was the minister of Friendship Baptist Church in Everettville, a tiny rural community just north of the Marion-Monongalia county line. Rick’s faith guided him for most of his adult life. Wallace said he also found God at Friendship Baptist, where his father also attended.

Rick’s testimonies were long and familiar, Wallace said. He was a beloved preacher.

“He had a story to tell to any Christian that he met. That was his story,” Wallace said.

West Virginia hadn’t yet issued stay-at-home orders, and large gatherings were still permitted. That wasn’t the case in other states, Wallace saw on TV.

“No one had to tell me that I should not be there, because I just had a funny feeling that it was too early for me to socialize,” Wallace said.

Wallace had a stent put in his chest and got sick from the flu in February. He was just getting back to work that next Monday.

“But that’s such a big thing to them because that’s such a small church. They don’t have a large gathering, there’s only about 10, 15 members there, if there’s that,” he said. “His way of thinking was this was something we don’t get to do every Sunday, so it’s very important ... It was something that he had looked forward to.”

Rick told his brother the Lord would take care of him. Rick decided to go, but Wallace stayed home in Morgantown.

The pastor’s celebration turned deadly. COVID-19 was in that church, and it devastated North Central West Virginia’s Black Baptist community.

Paramedics rushed Rick into the hospital four days after the event. Wallace, a bus driver for WVU Hospitals, was in the middle of a shift when he got the news.

Wallace tried to follow his little brother into the emergency room. He was blocked by hospital staff, because the building was on lockdown.

Rick called Wallace the day after the celebration and said the service had been standing-room only. Wallace didn’t think twice about it, he said, so he was shocked when his brother was admitted.

“At that point I knew it was serious,” Wallace said.

The family communicated through a nurse’s cellphone — Wallace said he is deeply appreciative of Rick’s nurse for going the extra mile for the Hood family.

They were communicating regularly until Rick had spent a week in the hospital.

Rick started gaining strength again a few days after he was admitted, sparking optimism for the family.

Rick was on life support, and doctors told Wallace they might have to cut off his brother’s leg to save his life. They administered dialysis, even though Rick had never had a kidney problem.

A doctor then asked Wallace what Rick would want, if he was conscious to know his condition. Wallace said because the two were so close, he had to take a backseat during his hospital stay.

“I’d say probably the second week they were grasping for straws,” he said.

Shortly before Rick died, Wallace, his wife and son FaceTimed with the nurse from their home. Wallace’s son told Rick he loved him deeply, and was sorry this happened to him.

Rick was unconscious, but the family swears he nodded in approval. It wasn’t crazy to them. When Rick woke from his coma following the accident as a young man, he told his family he could hear every word they were saying. He knew then, and Wallace said he knew 30 years later, Rick could still hear them.

Rick died at 62 years old after two weeks in the hospital. It was Good Friday.

He was one of the first West Virginians killed by COVID-19, and the second who died following the event in Everettville.

The former standout athlete stayed healthy throughout life, but gradually declined following the death of his mother in 2007. The two lived together, leaving Rick alone in the house he soon became paranoid of. Rick also lost his trucks and couldn’t get around.

“He did good up until my mom died,” Wallace said. “You could see that he’s starting to go down a little bit.”

But Rick had plenty more testimonies left in him.

‘I still live with that’

Wallace Hood knows COVID-19 is a killer. He wishes other people knew that, too.

Wallace has a video of Rick, in pain, while he was in the hospital. He thinks people should see these types of videos, and families should open up about their experiences to show people that COVID-19 is not a hoax.

Wallace dreamed about his brother the other day, he said. He still lives with the pain of not being at his brother’s bedside when he died.

“My heart goes out to all the people I don’t even know, because I still live with that,” he said. “I think there needs to be a network of consensus with these people. Sometimes, I think families need to know, other families that have grieved like they have.”

Wallace doesn’t grieve like the rest of his family. One of Rick and Wallace’s brothers was struck by a car and killed while he rode on a bicycle. Seeing their brother’s body, Wallace at 22 and Rick nearly 12, brought the two closer.

Rick’s family knew he could cheat death. He’d done it before.

But he didn’t this time, and Wallace still thinks about the last conversation with his brother he never got to have.

“My brothers and my sisters, that doesn’t bother them. They accept death in a different way than I do, because it’s kind of personal to me,” Wallace said.

Wallace and Rick could laugh about the not-so-good times. Like when Wallace put a dent in Rick’s 1952 Chevrolet truck, and told him not to worry about a payment because he was going to trade it in anyway.

Wallace said the closure he did get came in the form of prayer. When he saw his little brother nod his head, Rick had accepted death, and he knew he was praying to the man who once spared his life.

“That really kind of comforted me.”

Editor's note: Inside the '100 Lives' project

Three times a week, Gov. Jim Justice speaks about the people who have died from COVID-19. A 79-year-old man from Putnam County. An 81-year-old…