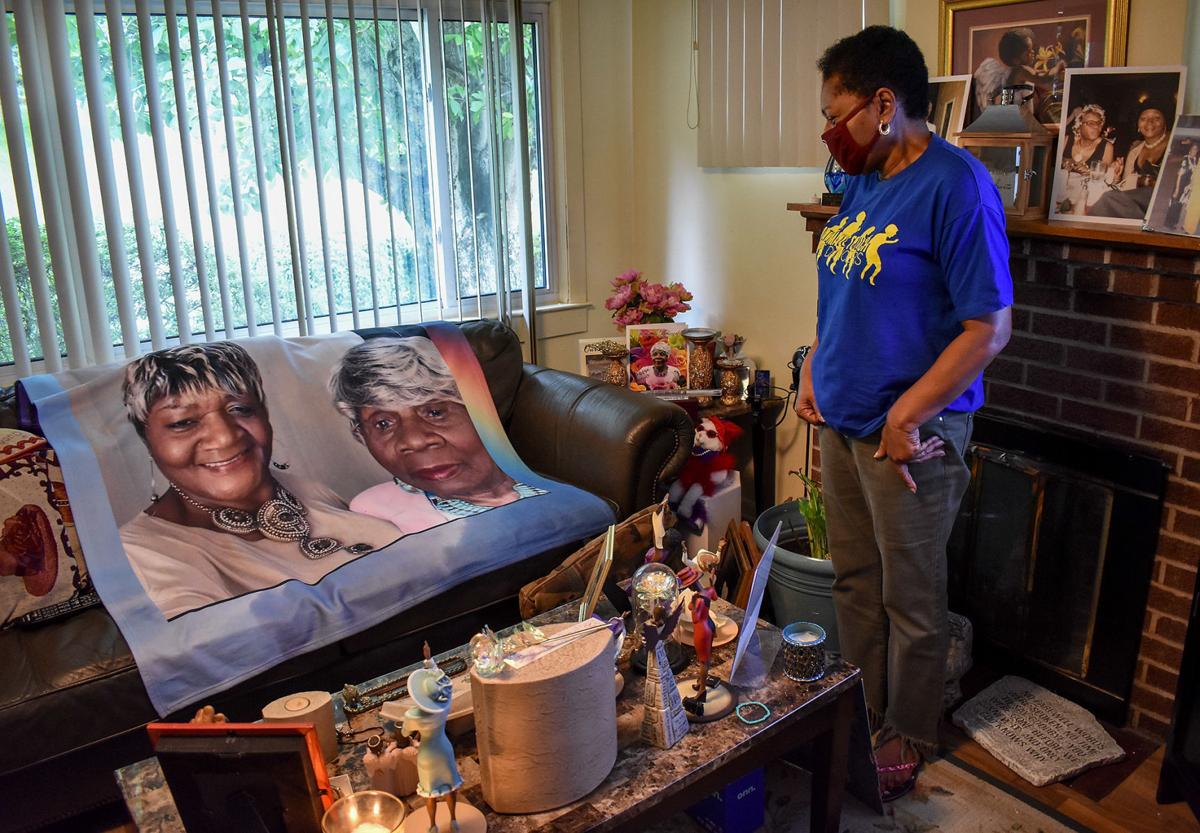 Brenda Kent looks over a blanket printed with her and her mother’s faces. Kent’s mother, Viola York Horton, died of COVID-19 in late March. 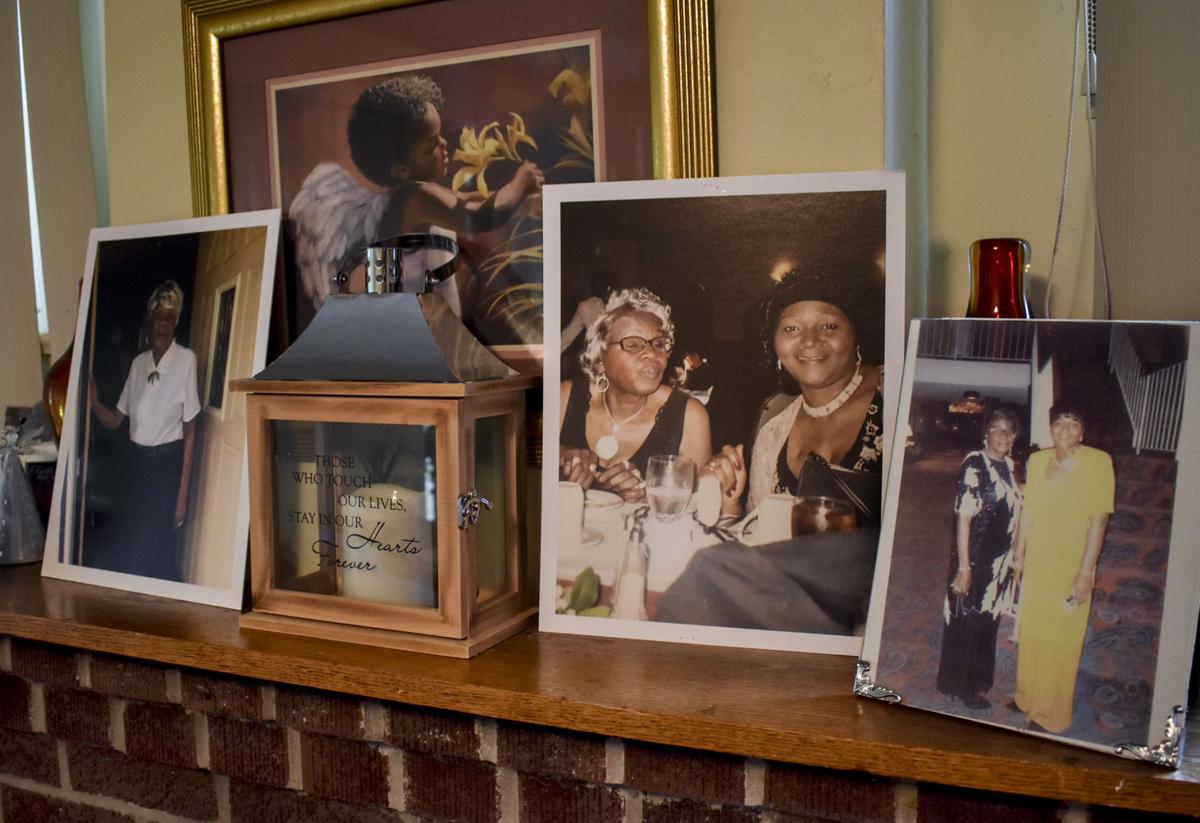 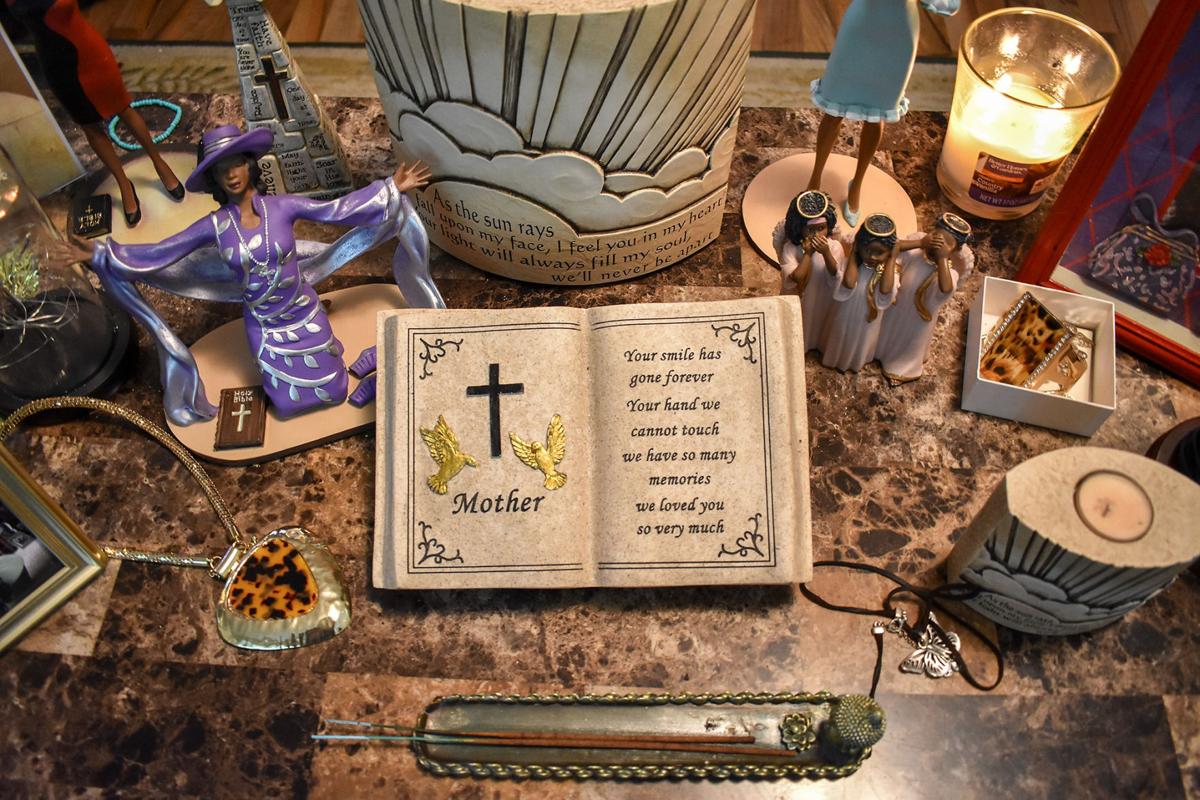 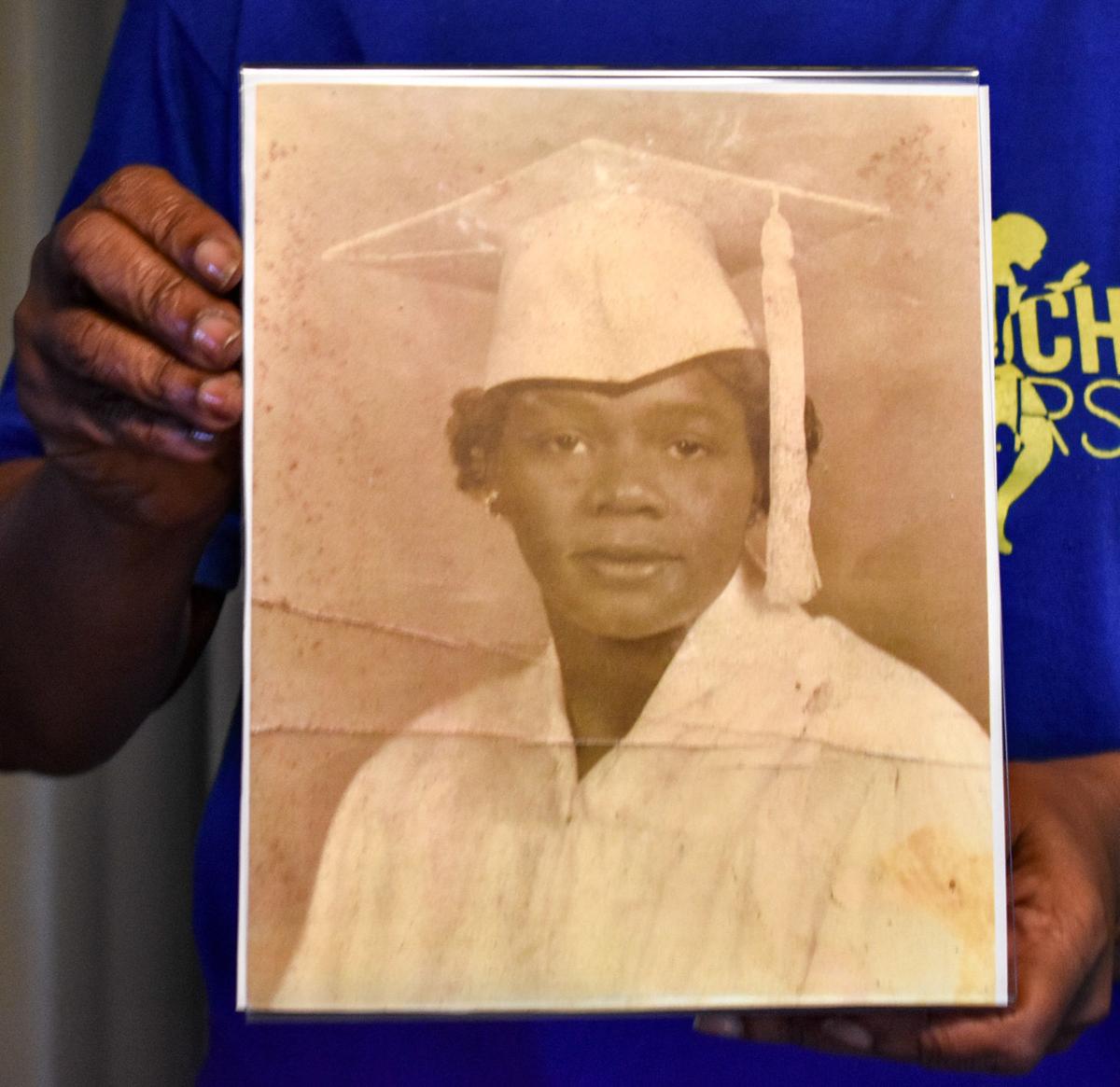 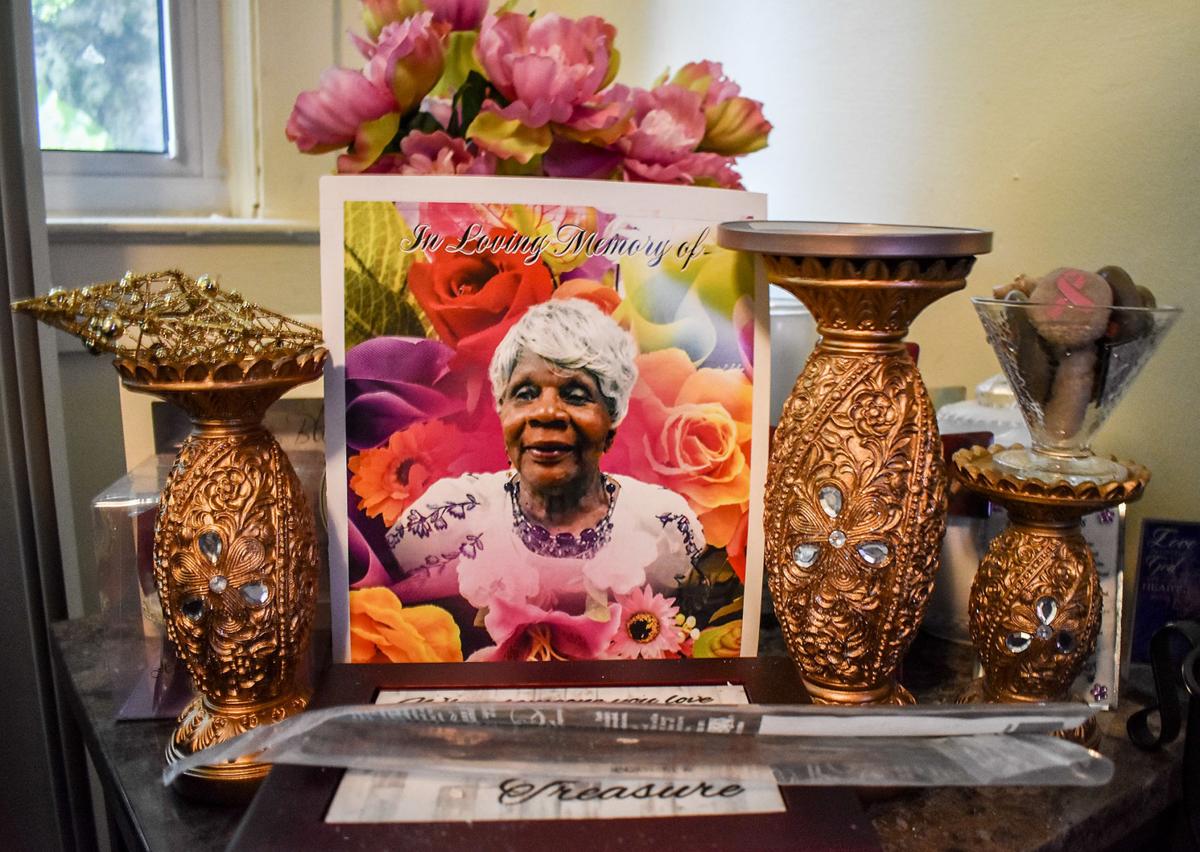 Brenda Kent looks over a blanket printed with her and her mother’s faces. Kent’s mother, Viola York Horton, died of COVID-19 in late March.

FAIRMONT — Saturdays are the hardest for Brenda Kent.

She spends them remembering her late mother, Viola York Horton. For the past six months, Kent has grieved her line dancing partner.

Ms. Vi, as friends called her, learned line dancing with her daughter nearly a decade ago. The two often traveled to Ohio on weekends to dance with friends.

Horton was 88 years old when she became the first West Virginian to die from COVID-19 in late March, but Kent knows her mother had much more life left to live.

“She was something else. My mother was a jazzy ol’ somethin’ for 88,” Kent said. “She was, little senior citizen.”

Horton grew up in Fairmont and called it home for her entire life.

She was the youngest of her many siblings, and the only one who stayed in West Virginia. Horton, a single parent, had three children — Kent, and her two younger brothers, Frankie and Albert.

Gran, as her family called her, first started going to church services at Morning Star Baptist Church 50 years ago, when it was in a small building on Robinson Street in downtown Fairmont, and sparsely attended. Morning Star now sits a few streets over, and boasts one of the largest Black congregations in North Central West Virginia.

On March 15, seven congregations from the region packed the tiny white building in Everettville. Horton, a longtime member of the choir, insisted she go to Everettville that day, Kent said, because they were invited.

Kent said she still tried to tell her mother not to go to the service.

As part of its “100 Lives” project, the Gazette-Mail is profiling Horton and others who died as a result of the coronavirus pandemic in hopes of learning more about the virus and its impact on all West Virginians.

The COVID-19 threat came quickly — and West Virginia had yet to take any official action to prevent the spread of the virus. As a result, public gatherings of all sizes — like the celebration in Everettville — were still permitted in the Mountain State.

COVID-19 tore through North Central West Virginia’s Black Baptist churches in the weeks after the event. State and local officials failed to organize a response, leaving the community to fend for itself.

Kent and Horton spent nearly every second of every Saturday with each other. If they weren’t line dancing, they were out shopping. They always did something, and they were rarely caught doing anything without each other.

‘They took so long’

At first, Horton asked her daughter for cough syrup.

It had been three or four days since the celebration in Everettville. All seemed normal, and Kent never even noticed her mother’s dry cough.

“She never once complained about a headache, a fever, absolutely nothing,” Kent said.

Medication had caused Horton to lose partial sight in one eye shortly before her death, and her doctor recently upped her blood pressure medication from half a pill to a whole one, Kent said. Other than that, her daughter said, Ms. Vi had been as healthy as could be.

When Kent came home from work on the Wednesday following the service to find her mother sitting alone without the TV on, she knew something was off.

“She said, ‘Brenda, it seems like when I sit down something is pulling at me, taking my strength, won’t let me hardly get up,’ ” Kent said.

Kent told her mother she was likely just stiff, because they hadn’t line danced in a few weeks.

Friday night rolled around, and Horton’s condition worsened. Saturday morning, she called Kent to say she just was not feeling well. Kent drove out to see her mother Sunday morning. Horton was very sick, and Kent decided to take her mother back to her home.

Horton couldn’t dress herself and had trouble walking. She ate a few crackers and applesauce, lounging and sleeping throughout the day.

Kent heard a thump from the bedroom at 4 a.m. She found her mother in the doorway, looking lost and her eyes rolling.

Kent said she knows when people are thrown into emergency situations, time can last forever. But she remembers exactly how much time passed before help came.

“In the meantime, I called the paramedics, and they kept me on that phone about 25 minutes or more, asking me all of these questions. To me, they made me feel like, ‘I don’t know if I’m going to go out there, what if they got the virus?’ ” Kent said. “That’s how they made me feel. They took so long, and the paramedics are just around the corner from my house.”

Help finally came, and Kent got in her car and followed the ambulance to Morgantown. Fairmont Regional Medical Center, just two minutes from Kent’s home, had closed less than two weeks earlier. Horton, instead, rode in an ambulance for 25 minutes outside of Marion County, her home of 88 years, one final time.

Within three days of arriving at the Morgantown hospital, Ms. Vi was admitted into critical care.

COVID-19 had taken a stranglehold on West Virginia. The state government ordered all non-essential businesses to close, and hospitals implemented strict lockdown procedures.

Kent couldn’t see her mother in the hospital after paramedics rushed her into the emergency room. She was forced to watch every one of her mother’s final moments through her cellphone.

FaceTiming from a nurse’s phone, Horton reminded her daughter of their agreement — they weren’t going to let one another suffer before death.

Horton wanted to be taken off the life-support machines.

Kent pleaded with the doctor to keep Horton on pain medication, but he told her Horton’s immune system was in decline, and the medicine could overwhelm her. Her mother was in so much pain, Kent said.

Horton said God was there waiting for her. Kent believed her. This wasn’t something she had ever said before.

The early hours of that Monday replay over and over in Kent’s head.

“Seeing her in that hallway, seeing her take her last breath, hearing her tell me she needed me,” Kent said. “I begged them please, please let me go in there with my mother. Don’t let her be by herself.”

Kent watched her mother take her final breaths over video chat. They exchanged “I love you’s”, and she was gone — exactly 14 days after the event in Everettville.

Before she died, Horton, who also was Morning Star’s longtime janitor, asked her daughter for one more favor.

“She said, ‘I need you to do something for me, BK. I didn’t get a chance to sweep the steps at the church because I didn’t know I was going to be in here.’ She said, ‘Will you sweep the steps for me?’ I said, ‘Mama, you know I will, don’t even worry about it,’ ” Kent said.

Ms. Vi raised three children on her own.

“My mom tried to instill in us to work; ain’t nothing come free, you have to work for it. And if you made any other choice in life, you made it on your own,” Kent said. “Our mother told us the right things to do, and she showed us, by the hard-working woman that she was, by herself.”

Horton kept shoes on their feet and clothes on their backs. Food was on the table, and she made sure her children were stuffed during holiday meals.

“When we were coming up, we didn’t have much,” Kent said. “We were poor, but we were happy and we did well. Back in those days, a whole lot of people were poor.”

Their life with an outhouse, coal stove and kerosene lamps ended when Horton earned a good-paying job at Westinghouse, an electric company in Fairmont.

“Shoot, all that stuff was over with. Now we got a bathroom and everything else going on,” Kent said.

Ms. Vi was a huge sports fan, Kent said. She supported her children and grandchildren throughout all levels of about every sport.

Horton, who attended Dunbar High School, Marion County’s only Black school before segregation ended in 1954, was a cheerleader who loved to sing and dance, and she kept the love for both throughout life. Ms. Vi played on the boys softball team because there weren’t enough players for a girls team, Kent said, and she stayed a tough individual her entire life.

Horton and family traveled to Houston once to see Rashod Kent play.

Brenda Kent reflected fondly on her childhood in her home in Fairmont, which she has turned into a shrine for her mother. Kent sits next to a blanket adorned with both their faces, her mother’s urn on the table, and plenty of photos.

The weight Kent carries every day, knowing her mother was the first recorded West Virginian to die of COVID-19, is often too much to bear. Knowing she wasn’t by her mother’s side when she died hurts even more.

“My mom and I were very, very, very close, and for a person to be that sick and not be able to have no one there with them ... I’m just having a hard time with that,” Kent said.

The church outbreak received little news media attention until it came all at once. Kent said she took calls from reporter after reporter, even months after her mother’s death. She said one reporter even asked if she could get emotional while they talked, and Kent told her to never call again. She said she stopped taking all reporters’ calls afterward.

‘It’s not over with’

Kent works in the cafeteria at Fairmont State University. Students have been back to campus for more than a month now, and she remains wary of the virus.

She’s tasked with asking students to move when more than four are at a table. She said they look at her like she’s crazy, but they don’t know the hell she’s been through.

“Those kids are starting to be too comfortable, and I’m right in the middle of them,” Kent said. “I’m trying to protect them.”

Kent tested positive for the virus not long after her mother was admitted to the hospital. No one was around to help then, either.

“No one had really, I guess, got in touch with us about what was going on,” Kent said. “Then I started having symptoms of the virus. I was about to drive myself crazy; I kept having headaches and having these little temperatures.”

She recovered, and she said she’s thankful God spared her and the rest of her family. After months of shutting out the world and fighting depression, she found her own connection with God.

Everything reminds Kent of her mother, and the pain doesn’t come just on Saturdays.

The two taught line dancing classes during the week at a local park for about eight years. Every day, Kent said, she remembers the woman who always kept her moving.

“She’d be waiting on me faithfully when I’d get off work. There’d be times when I was a little tired and I’m trying to make up an excuse to cancel class for the day,” Kent said. “Not my mom. She’d call me, ‘What time you going to pick me up, we going to line dance class?’ She looked forward to that.”

Editor's note: Inside the '100 Lives' project

Three times a week, Gov. Jim Justice speaks about the people who have died from COVID-19. A 79-year-old man from Putnam County. An 81-year-old…