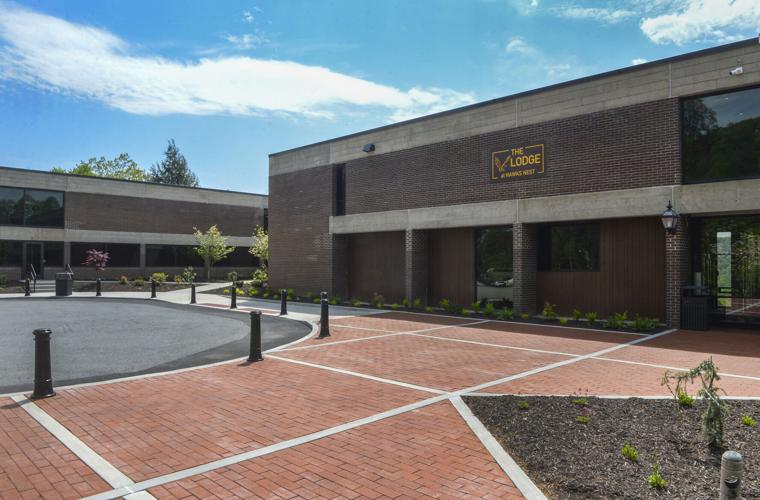 New landscaping work was among improvements made to the Hawks Nest State Park Lodge, designed by famed modernist architect Walter Gropius and The Architects Collaborative, which he cofounded. 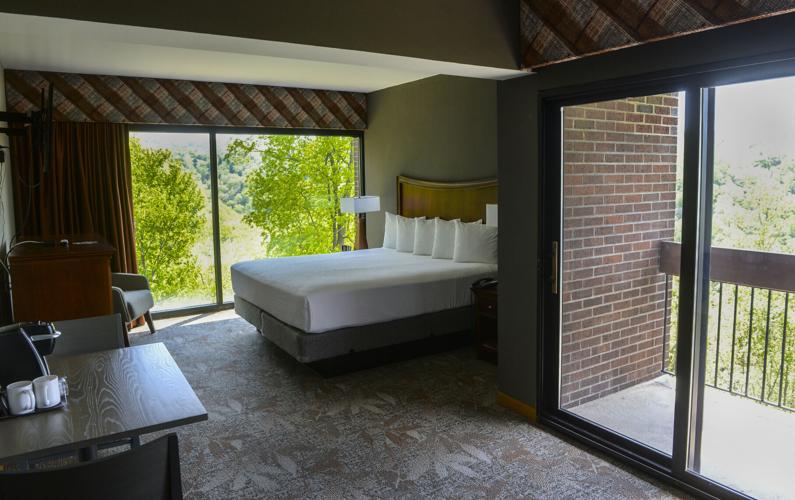 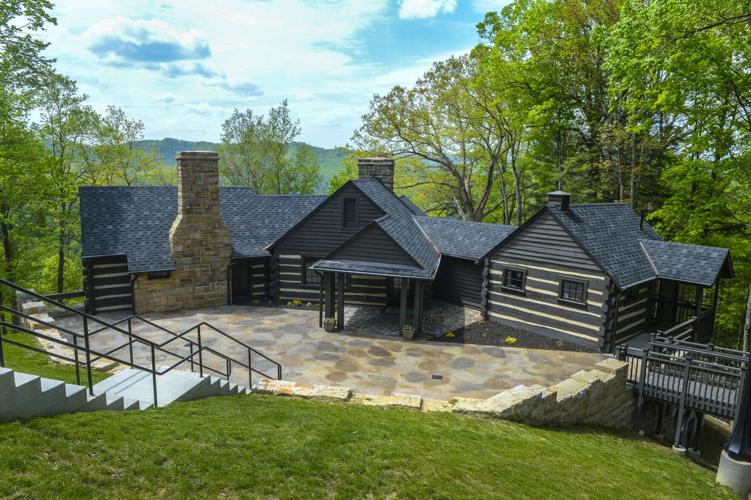 The once-mothballed former museum building at Hawks Nest, built in 1937 by the Civilian Conservation Corps, has become a conference center and wedding venue through a recently completed $7 million renovation project at the state park. 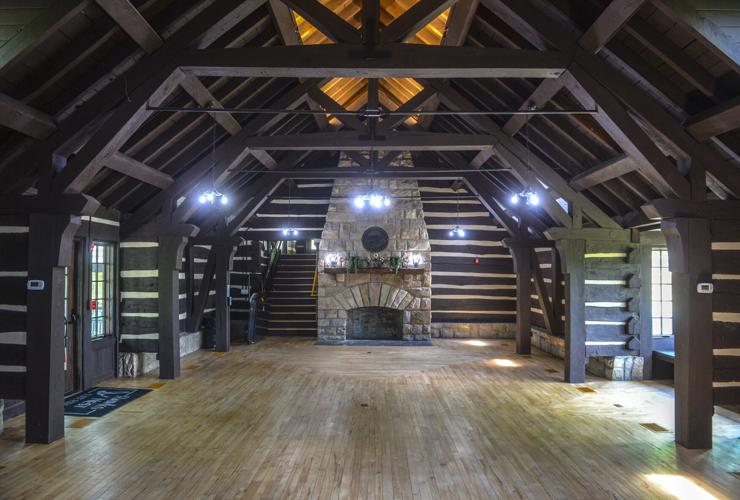 The original chestnut log walls and beams, hardwood floors, and stone fireplace in the former museum building were preserved and incorporated into the structure’s new life as a conference center. 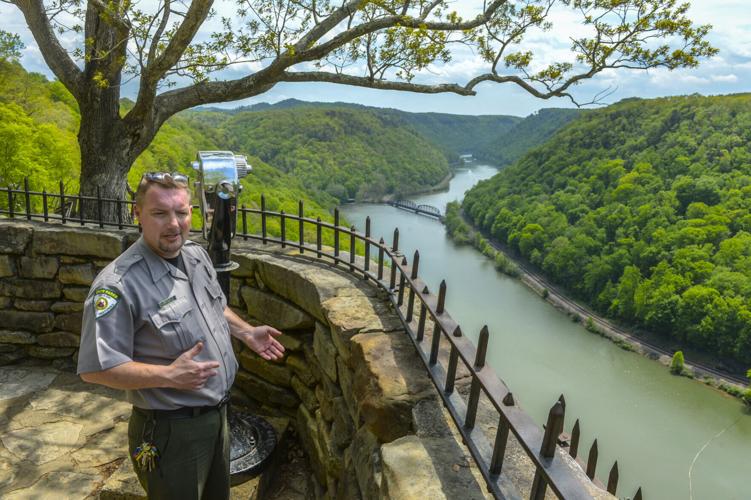 Hawks Nest State Park superintendent stands at the edge of Hawks Nest Overlook, built by members of the Civilian Conservation Corps in the 1930s. The view from the overlook is now one of West Virginia’s most frequently photographed scenes. 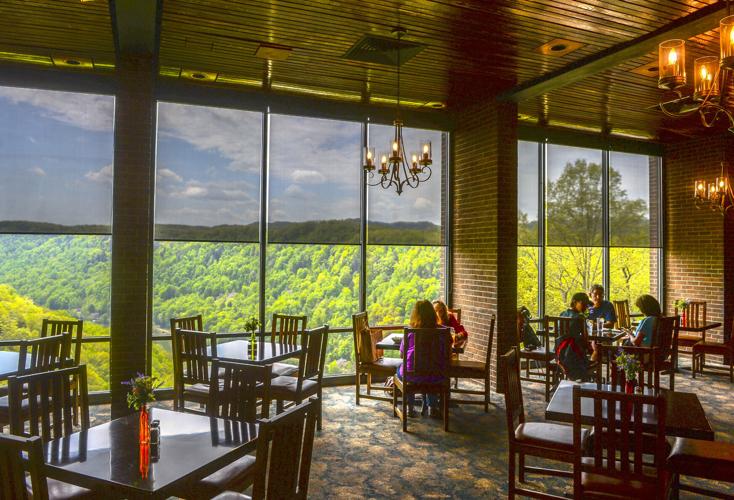 New landscaping work was among improvements made to the Hawks Nest State Park Lodge, designed by famed modernist architect Walter Gropius and The Architects Collaborative, which he cofounded.

The once-mothballed former museum building at Hawks Nest, built in 1937 by the Civilian Conservation Corps, has become a conference center and wedding venue through a recently completed $7 million renovation project at the state park.

The original chestnut log walls and beams, hardwood floors, and stone fireplace in the former museum building were preserved and incorporated into the structure’s new life as a conference center.

Hawks Nest State Park superintendent stands at the edge of Hawks Nest Overlook, built by members of the Civilian Conservation Corps in the 1930s. The view from the overlook is now one of West Virginia’s most frequently photographed scenes.

ANSTED — A pair of buildings representing opposite poles of the design spectrum and both sorely in need of repair have been given new leases on life following a yearlong renovation project at Hawks Nest State Park.

Completed in 1967, the park’s four-story, 31-room lodge building, overlooking the northern end of the New River Gorge, was designed by The Architects Collaborative, founded and led by Walter Gropius, the German emigrant credited with introducing modernist architecture to the United States.

In 1937, on a knoll across U.S. 60 from the lodge, the Civilian Conservation Corps used hand tools and local materials — primarily chestnut logs — to build a rustic, two-story building that initially housed a museum, multi-windowed room for viewing the Gorge and living quarters for a park staffer.

“You have to appreciate what the CCC boys were able to do here, with no power tools or lifts,” said Hawks Nest State Park Superintendent Joe Baughman, who lived in the building when he began his career in the state parks system as a carpenter at Hawks Nest.

During the park’s early years, the museum building was the centerpiece of a CCC-built complex straddling U.S. 60 that included the iconic clifftop overlook on one side of the highway, with a gift shop, restrooms, picnic pavilion and museum on the other.

Years of deferred maintenance took their toll on the museum building. “It was starting to rot away,” Baughman said.

By 2010, the building was on the Preservation Alliance of West Virginia’s endangered properties list and eventually was closed to the public pending structural repairs and improved accessibility. Its museum exhibits, which included artifacts from Native Americans and European settlers who lived in the area, were distributed to other state parks with museum components.

But in late 2020, work began on a $7 million improvement project at Hawks Nest, of which about $2 million was spent to restore, stabilize and repurpose the 85-year-old log structure for a new role as an event center, serving weddings, conferences and other gatherings of up to 65 people.

A ramp off a parking area near the lodge now leads to a lift into the building. The lodge previously could be accessed only by a stairway from the gift shop and restroom area.

The former museum is equipped with a new catering kitchen, restrooms, conference seating and furniture and Wi-Fi. Crews made roof and other structural repairs and heating, ventilation and air-conditioning upgrades, and they added new landscaping.

The work was designed to comply with state and national historic preservation standards, enabling the building to retain its listing on the National Register of Historic Places as an example of New Deal-era public works structures found in West Virginia’s state parks system.

“All the original chestnut logs and all the fixtures installed by the CCC boys are here,” Baughman said.

Across U.S. 60, perched on the rim of the Gorge, the park’s lodge complex is the site of more extensive repairs.

“We closed the lodge and started renovation work in October of 2020 and reopened in October of last year in time to catch some of the fall season,” Baughman said. “We made some structural repairs and completely rejuvenated the building.”

New floor-to-ceiling windows with ultraviolet light protection were installed in the lodge’s restaurant, giving diners an enhanced view of the Gorge and Hawks Nest Lake. The restaurant, now operated by the state parks system, is open seven days a week. Extensive landscaping work has taken place outside the lodge.

“Since April, occupancy has really been picking up,” said Baughman.

Hawks Nest State Park borders the north end of New River Gorge National Park and Preserve. But with its lodge closed for repairs for most of the 16 months since the Gorge’s new designation, it hasn’t had the opportunity to cash in on the 40% increase in visitation that has taken place since national park status was attained.

However, lodge vacancies for mid-spring and summer weekends and holidays already have become scarce to non-existent, and sales at the state park’s three gift shops have tripled since the Gorge became a full-fledged member of the national parks system, according to Baughman.

“If we had a way to add another 20 rooms here, we would keep them occupied,” Baughman said.

The work that’s been done during the past year, he said, “has preserved the park for 50 years.”

The Hawks Nest lodge was one of three West Virginia state park lodges designed during the 1960s by The Architects Collaborative. The Cambridge, Massachusetts, design firm was led and co-founded by Walter Gropius, a boundary-pushing modernist designer who fled his native Germany in 1934 and was named head of Harvard University’s school of architecture in 1938.

The design and construction of visitor lodges at Hawks Nest, Twin Falls and Pipestem state parks by The Architects Collaborative came about as a project of the Area Redevelopment Administration, a rural poverty initiative created during John F. Kennedy’s presidency. Gropius died in 1969, a few months after work began on his final design, an addition to the Huntington Museum of Art, completed in 1970.

While Gropius attracted an international following, his work was not revered by all.

According to the Society of Architectural Historians entry for Hawks Nest Lodge, the structure’s “angular lines have little to do with the undulating forms of surrounding mountains,” and its system of corridors with abrupt, right-angle turns was described as “unnecessarily convoluted.”

But the entry’s author allowed that the building’s design had “at least taken advantage of the view, with expansive window walls in lobby, dining room and guest rooms facing the Gorge.”

The renovation project at Hawks Nest is one of five major state park upgrades completed so far this year through a $151 million bond sale authorized by Gov. Jim Justice.

Justice recently announced the completion of an $8 million renovation project at Pipestem Resort State Park that included work on its two lodges, cabins and wastewater plant. Similar announcements were made in previous months for the completion of $5.7 million in upgrades to the lodge, restaurant and cabins at North Bend State Park; $6.85 million in renovations to the lodge and cabins at Blackwater Falls State Park; and $2.65 million in improvements to the ski area, cabins and campgrounds at Canaan Valley Resort State Park.

Rick Steelhammer is a features reporter. He can be reached at 304-348-5169 or rsteelhammer@hdmediallc.com. Follow @rsteelhammer on Twitter.

Aerial tramways at Hawks Nest, Pipestem to be removed and replaced

After more than a half-century of carrying visitors on scenic round-trip journeys to the depths of two river gorges, the aerial tramways servi…

Free military and veterans appreciation picnic to be held in Huntington

Ginseng and big pharma: How Appalachia built an industry that would later exploit it

Psoriasis Patient’s Story Offers Hope for Those Struggling with Symptoms

Trading skepticism for support: How parents can support kids with thinking and learning differences