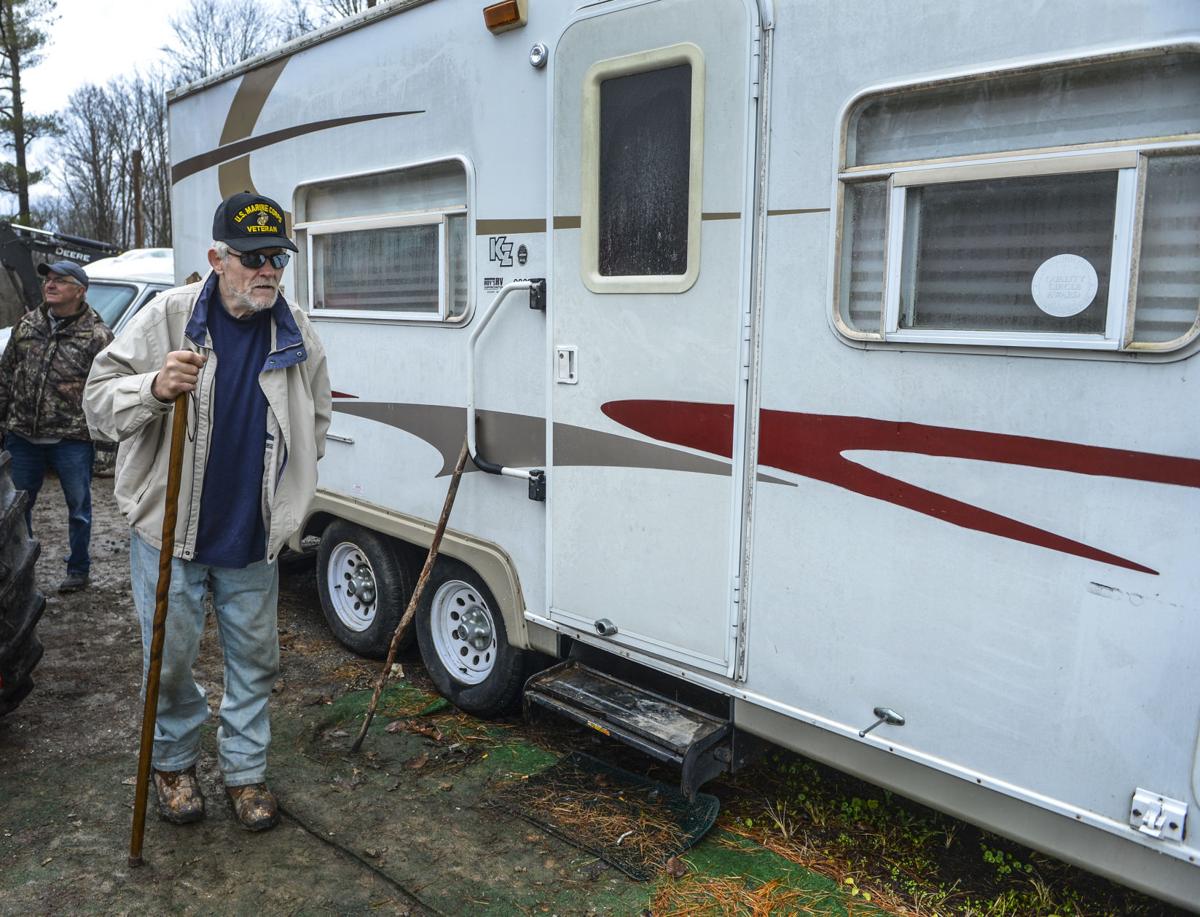 After his home burned to the ground, Young lived in his truck, then a tent, and then in this loaned travel trailer, parked at the site of his former house. 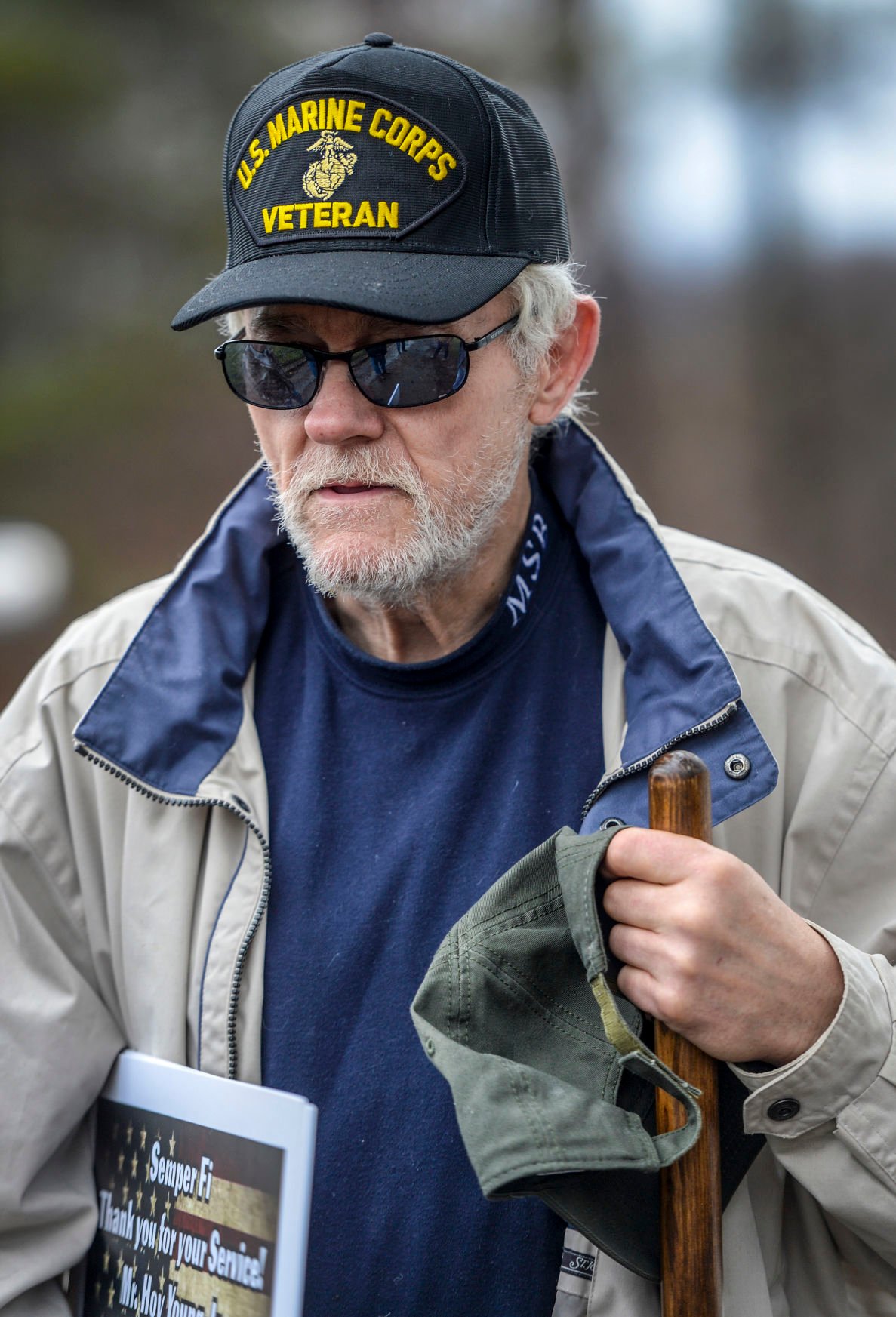 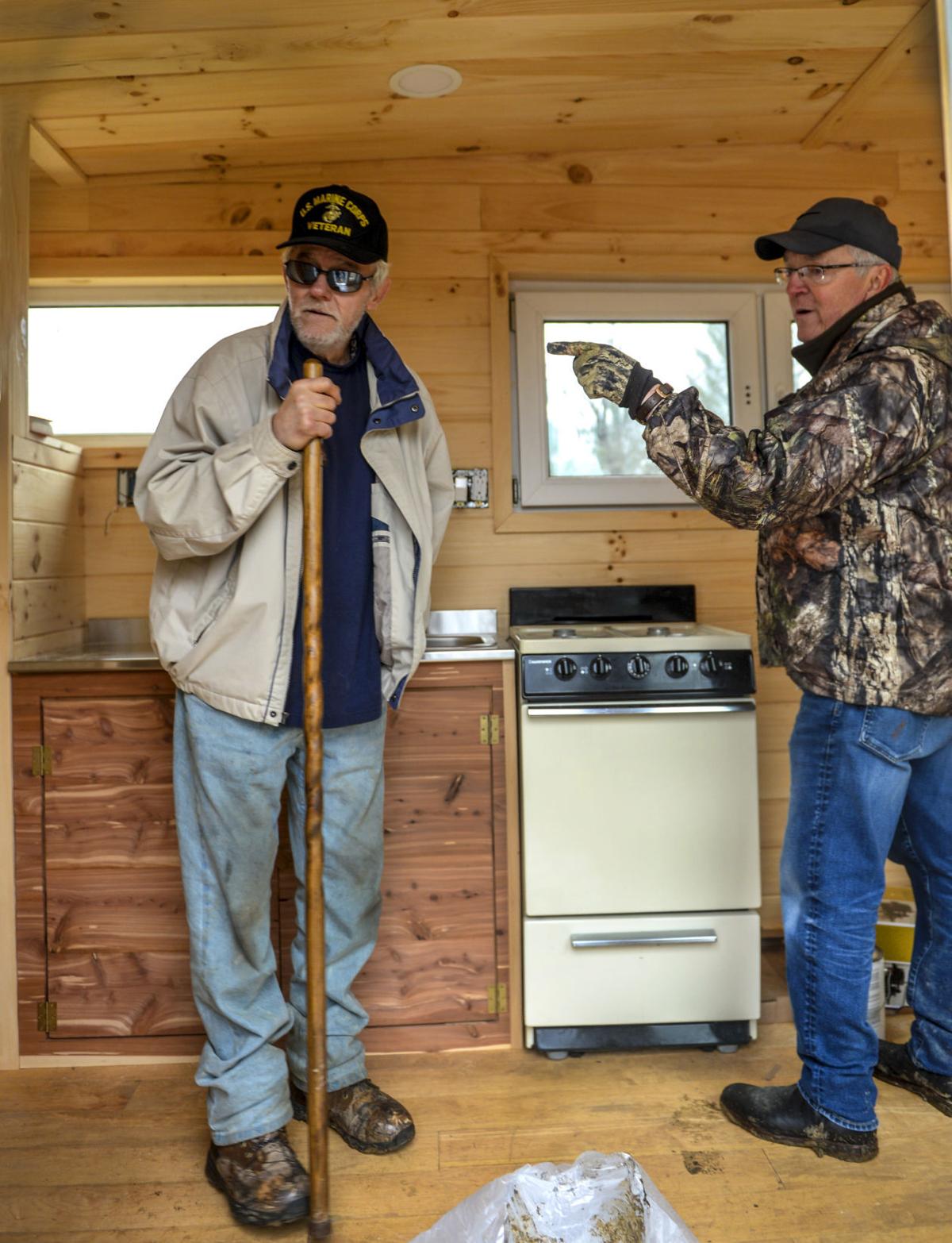 Jesse Boggs, of Vision Appalachia, points out the features as Hoy Young Jr. gets the first look at his new tiny house. 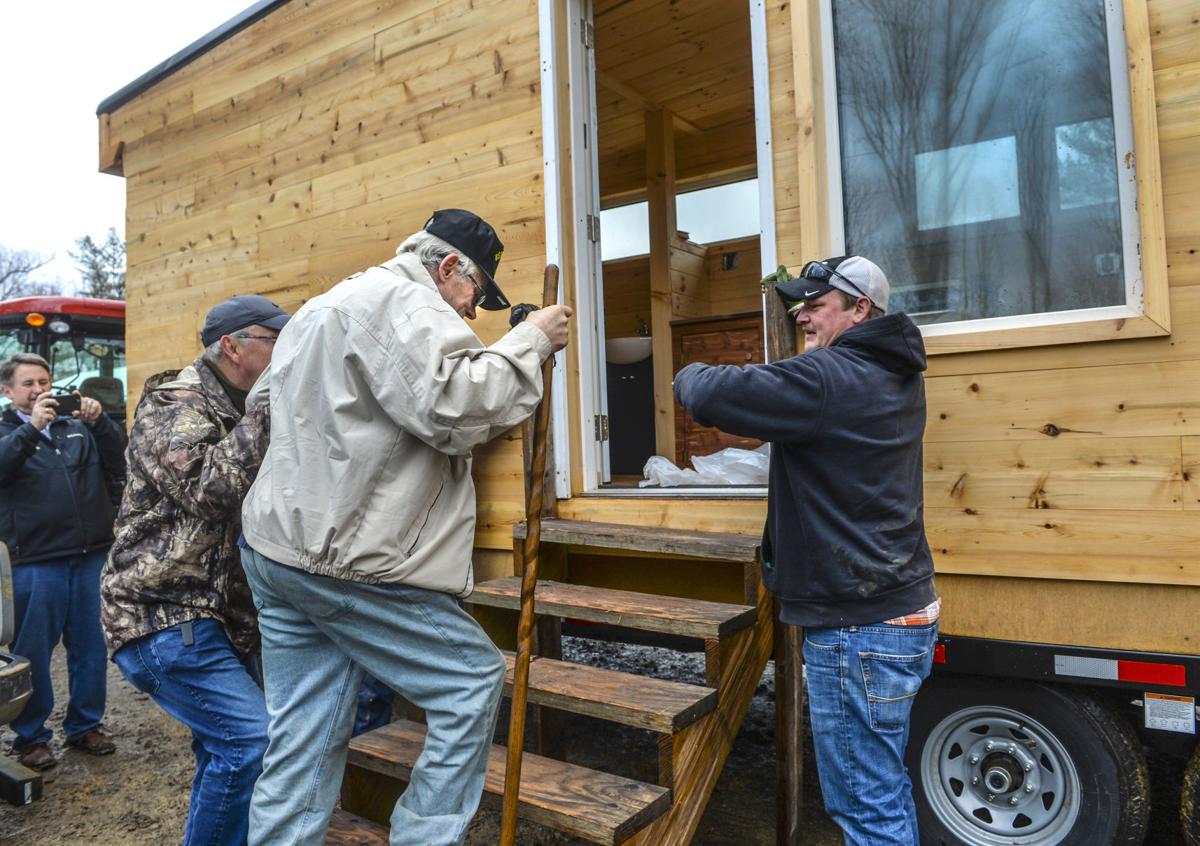 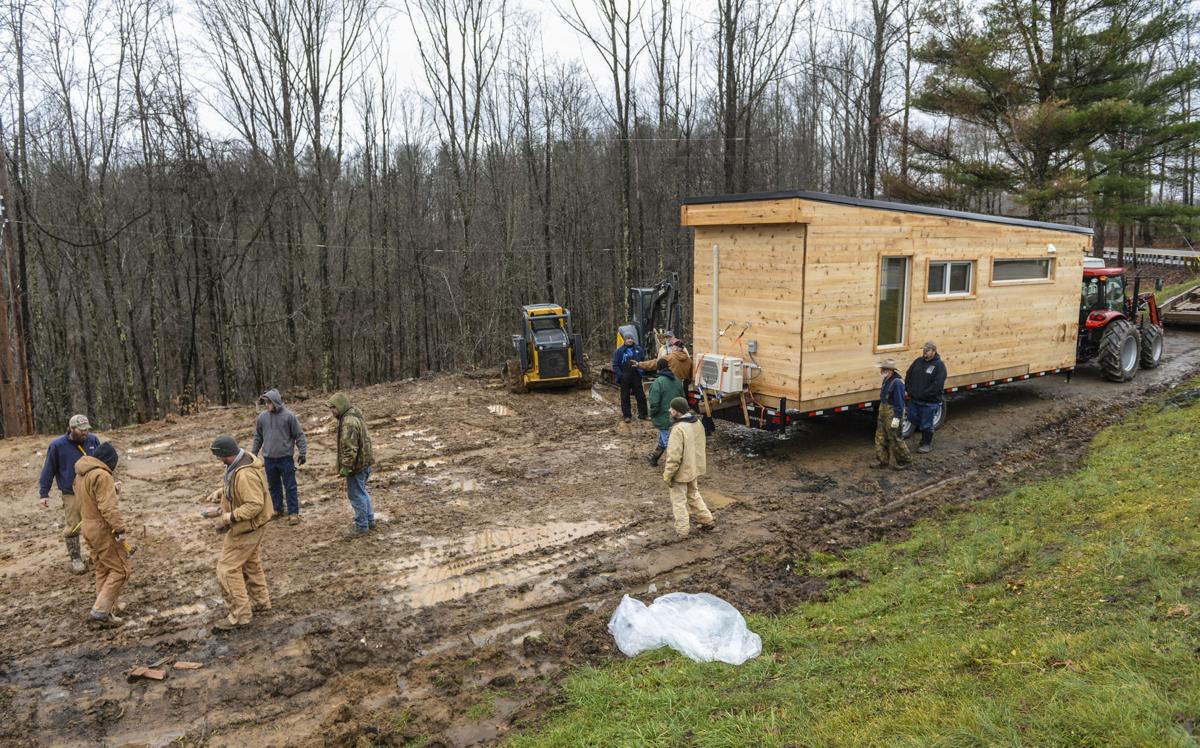 Volunteers scope out the area where the foundation to Hoy Young’s new tiny house will be built. Young’s house was destroyed by fire in September. The volunteers wanted to get the Marine Corps veteran’s new home ready to occupy by Christmas.

After his home burned to the ground, Young lived in his truck, then a tent, and then in this loaned travel trailer, parked at the site of his former house.

Jesse Boggs, of Vision Appalachia, points out the features as Hoy Young Jr. gets the first look at his new tiny house.

Volunteers scope out the area where the foundation to Hoy Young’s new tiny house will be built. Young’s house was destroyed by fire in September. The volunteers wanted to get the Marine Corps veteran’s new home ready to occupy by Christmas.

While hope might have been a hard sell for Young at the time, hands and hearts were already joining forces to lighten the U.S. Marine Corps veteran’s burden.

Young managed to escape the Sept. 22 fire with his life and little more than a lungful of smoke.

“For a week after the fire, I was kind of hoarse,” he said.

A native of Fayette County and a former resident of Charleston, Young enlisted in the Marine Corps in the early 1970s, as the United States was beginning to wind down its military presence in Vietnam.

“I’ve always loved my country,” he said. “It seemed like the right thing to do.”

Young spent eight years in the Corps, part of it overseas and the latter part at Marine Corps Base Quantico, Virginia.

In 1979, after attaining the the rank of staff sergeant, he returned to civilian life, resettling in West Virginia, where he said he helped establish FedEx shipping centers in the Beckley, Charleston and Parkersburg areas.

“I lived here 14 years — longer than I’ve lived in one place anytime in my life,” Young said as he stood outside his borrowed travel trailer at the site of his former house. From there — a wide spot on a ridgetop that also serves as the pathway for W.Va. 15 a few miles east of Flatwoods — an unbroken series of hills and ridges stretches toward the western horizon.

Days after the fire, neighbors discovered that Young, who has suffered multiple strokes and a heart attack in recent years, was still living at his home site, sheltering in the cab of his truck. When they realized Young had no intention of moving from the site, they provided a tent, which a local minister later upgraded to a loaned travel trailer.

Before long, a generator, jugs of drinking water and a portable restroom were brought to the site by local samaritans to compensate for its lack of power and running water.

Meanwhile, 150 miles to the north, in the Pittsburgh area, Jesse Boggs, founder of Vision Appalachia, a faith-based community assistance and development organization, had recently taken delivery of a partially completed tiny house. Begun as part of a veterans’ outreach project at Robert Morris University, the tiny house had been languishing in a warehouse at the university for most of the previous two years.

“With help from doctors John Stakeley and Marcel Minutolo at Robert Morris, we were commissioned by the university to complete this tiny home with the condition that a deserving veteran would receive it,” Boggs said.

A retired minister who lives in Pittsburgh, Boggs spent his childhood in West Virginia. A native of Clay County, he moved to Elkview with his family in 1966. After graduating from Herbert Hoover High in 1973, he went on earn a bachelor’s degree from Appalachian Bible College and a master’s from Grace Theological Seminary, then he spent 35 years in pastoral ministries.

Since founding Vision Appalachia with his wife, Debbie, seven years ago, the nonprofit and its volunteers have completed more than 70 home improvement projects in Clay, Roane, Braxton, Nicholas and Kanawha counties. The organization also has helped with food pantries, vision and eyeglass clinics, and sports camps in its target counties.

While looking for help in completing the tiny house, Boggs also kept an eye out for a deserving candidate to become its new owner.

Young first appeared on the radar as a prospective occupant after Chad Lockard, manager of the Lockard’s Inc. tractor and ATV dealership in Flatwoods and a neighbor of Young, became aware of his plight.

Lockard, in turn, mentioned the homeless Marine’s situation to a customer, Dan Carper, owner of Dan Carper Quality Construction at Elkview, who had worked with Boggs and his organization on previous projects in the area. Carper made Boggs aware of Young’s circumstances, and the retired minister soon paid him a visit.

After speaking with Young and viewing his living situation firsthand, Boggs felt confident a deserving candidate for the tiny house had been identified. Vision Appalachia’s board of directors concurred.

“Our goal was to have the tiny home finished and ready to move into by Christmas,” Boggs said.

But first, Young’s status as an honorably discharged veteran had to be confirmed, to satisfy Robert Morris University’s stipulation on the gift of the tiny house. Since Young’s discharge papers burned up in the fire, Boggs reached out to Brent Boggs (no relation), who represents Braxton County and a portion of Gilmer County in the West Virginia House of Delegates.

“A veteran deserves a lot more than to be left homeless,” said Delegate Boggs, who, with help from the state Department of Veterans Assistance and the office of Sen. Joe Manchin, D-W.Va., obtained certified copies of the needed paperwork.

Jesse Boggs then turned to his Clay County connections to prepare the tiny house for occupancy. Brian Holcomb and a group of his vocational education students at Clay County High School agreed to take on the task, and Boggs towed the tiny house to Clay.

Holcomb and his students redid the interior and exterior surfaces in white cedar from boards milled by an Amish community in Ohio. The tiny house is equipped with a washer and dryer, air conditioner, furnace, bathroom with shower, and kitchen sink and food preparation area supported by handcrafted cedar cabinets.

Because of the havoc COVID-19 was causing with school activities, though, the CCHS students were unable to apply the finishing touches to the project. Carper picked up the torch and, by early December, the tiny house was ready for transport to Young’s homesite.

Young’s neighbors, including Timothy Rollinson and Dusty Hudkins, hauled off the charred remnants of the veteran’s home and began preparing the site it once occupied for a new dwelling.

On Dec. 7, the tiny house was towed by a tractor driven by Lockard to Young’s property. Among a group of well-wishers, volunteers and neighbors awaiting its arrival was Jesse Boggs.

“A lot of veterans of the Vietnam era say ‘Welcome home’ when they greet each other, since they didn’t get much of a welcome when they first came home,” Boggs said as he walked with Young toward the tiny house’s doorway. “So, welcome home, buddy. Here’s your new home.”

Boggs and Young then climbed a temporary stairway to look over the gleaming interior of the tiny house, which has since been equipped with a porch, stairway, bed, recliner and large cache of groceries by Gassaway Baptist Church.

“I don’t know what to say,” said Young, who moved into the house on Monday. “It’s beautiful. I’ve never seen so much kindness in all my life.”

For more information on Vision Appalachia and its work in West Virginia, visit https://www.visionappala chia.org.

How to fight climate change from your backyard

New blood test poised to change how cancer is found

What Would You Do If Your Child Had a 1 in a Million Rare Disease? [Video]