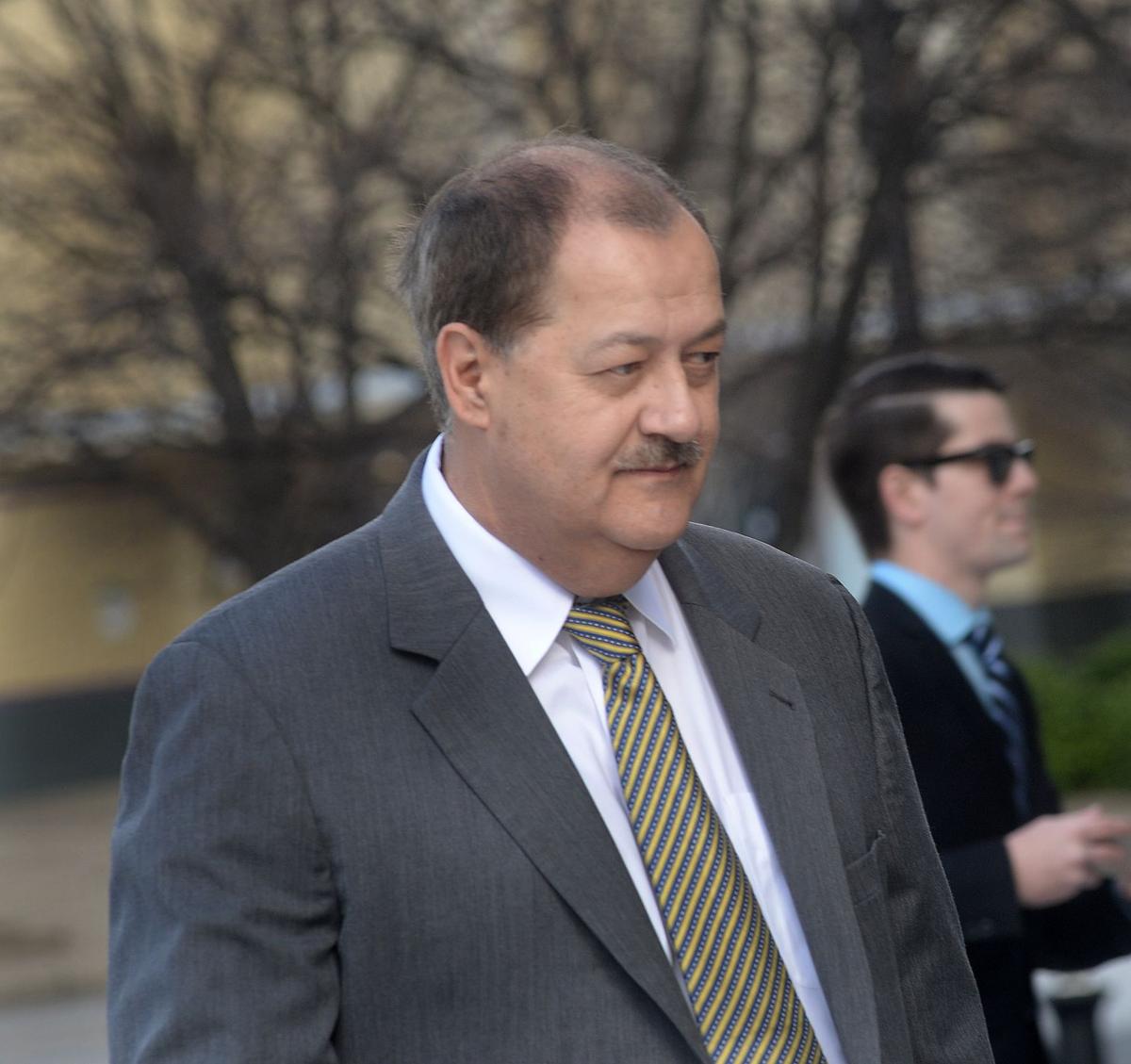 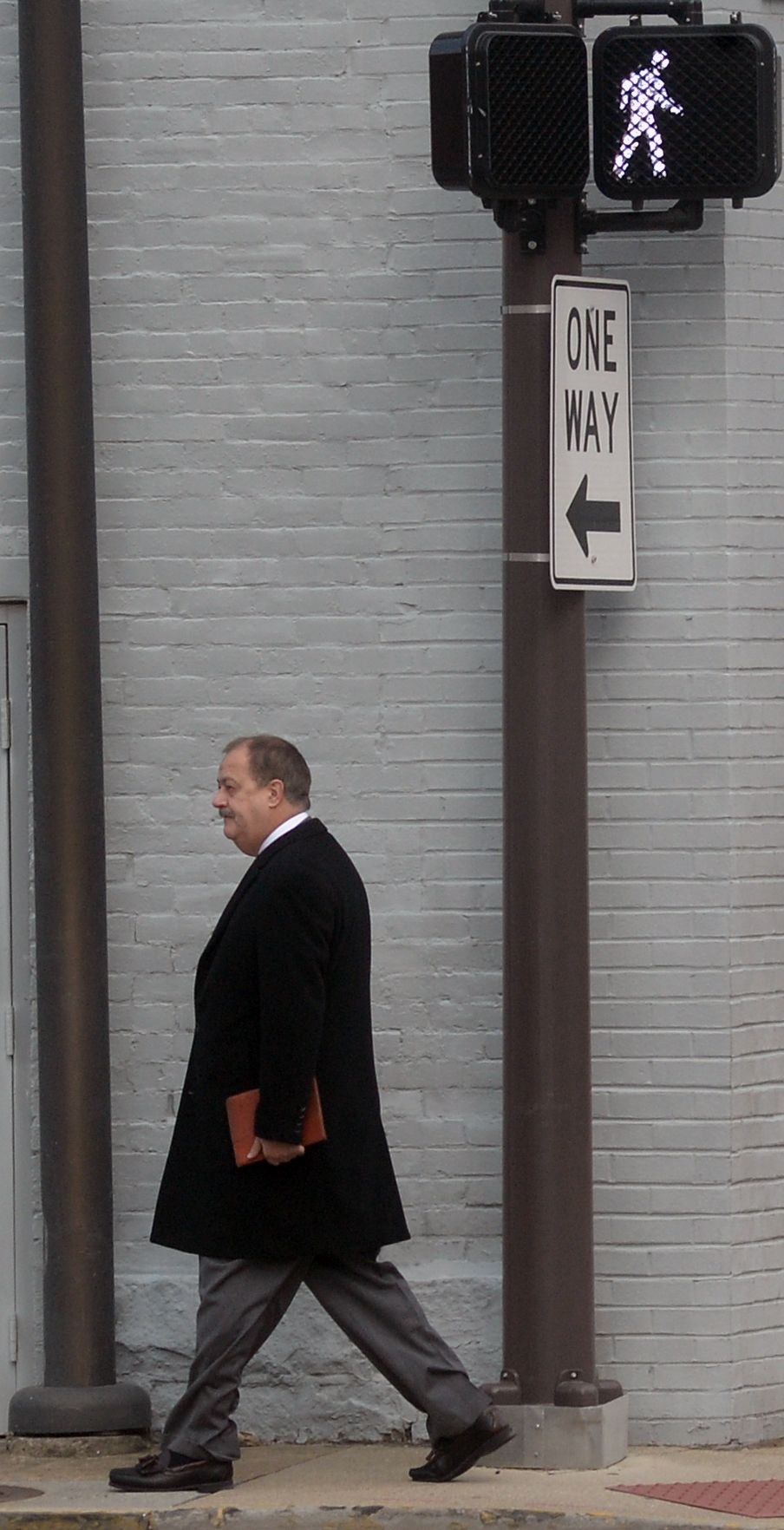 Blankenship walks across Virginia Street to the courthouse.

Blankenship walks across Virginia Street to the courthouse.

Former Massey Energy Co. CEO Don Blankenship, who rose from humble beginnings in Mingo County to become the wealthy and powerful chief executive of one of the region’s largest coal producers, will serve one year in prison and pay a $250,000 fine for a mine safety criminal conspiracy, a judge decided Wednesday.

U.S. District Judge Irene Berger sentenced Blankenship to the maximum penalty allowed for his conviction for conspiring to violate federal safety and health laws at Massey’s Upper Big Branch Mine, where 29 workers died in an April 2010 explosion.

Berger also ordered Blankenship to serve one year of supervised release, sentencing him during a hearing held six years and one day after the mine blast that prompted an aggressive federal investigation that laid bare long-standing complaints about Massey’s business and safety practices under Blankenship’s micromanaging leadership.

“The crime is serious,” Berger told Blankenship, a packed courtroom and a full overflow room equipped with a video feed. “By putting profitability of the company ahead of the safety of your employees, you, Mr. Blankenship, created a culture of noncompliance at Upper Big Branch where your subordinates accepted and, in fact, encouraged unsafe working conditions in order to reach profitability and production targets.”

Blankenship, 66, was granted permission to surrender voluntarily at a prison yet to be identified by the U.S. Bureau of Prisons when notified to do so by the federal Marshal’s Service.

Berger denied a request from Blankenship to remain free on his current $1 million bail pending a decision by the 4th U.S. Circuit Court of Appeals on an appeal of his conviction.

Defense lawyers asked, and Berger agreed, that Blankenship would not have to report within the next 10 days, so they would have time to ask the 4th Circuit to allow him to remain free pending a full appeal. Typically, though, it takes more than 10 days for offenders to receive notification about where they will serve their sentences and when they must report to prison.

In December, a federal jury convicted Blankenship following a trial that stretched over two months. The trial revisited the worst U.S. coal-mining disaster in a generation and focused on the long-standing criticism that Blankenship and Massey put coal production and corporate profits ahead of workers’ health and safety.

While Blankenship was not charged with causing the disaster, the accusations against him focused on rampant violations of basic safety standards — mine ventilation, roof support and dust control — known for decades to be effective in preventing mine explosions.

“Breaking mine safety laws kills coal miners,” said Assistant U.S. Attorney Steve Ruby, the case’s lead prosecutor. “If ever a case cried out for the maximum sentence, this is it.”

Ruby added that the history of coalfield communities is full of “one preventable catastrophe after another” that could have been avoided by not violating longstanding mine safety rules.

“Most of the time, you can get away with it,” Ruby said, “but do it enough, and it catches up with you.”

Lead defense lawyer Bill Taylor had urged Berger to issue a probation-only sentence, with a fine and no jail time. Taylor said the government and news media had inflamed public sentiment against Blankenship, painting him as a “homicidal monster, a man who sent his employees to their doom while counting his money,” even though prosecutors had no evidence directly linking Blankenship to the violation of mine safety and health standards.

“We believe that the court of appeals will ultimately tell us that the government did not charge a crime and it did not prove a crime,” Taylor said.

On a courtroom computer screen, Taylor tried unsuccessfully to show the judge a video of former U.S. Attorney Booth Goodwin, who brought the charges against Blankenship, in an episode of the television news show “60 Minutes” that examined Blankenship’s conviction. Taylor noted that, since the trial, Goodwin resigned the prosecutor’s post and is reminding voters of the case as he seeks the Democratic nomination for governor of West Virginia.

Berger reminded Taylor that the crime Blankenship was convicted of — conspiracy to violate safety standards — usually doesn’t involve “direct evidence of some express agreement,” but instead is proven through circumstantial evidence, something that experts have said made the government’s strategy against Blankenship especially powerful.

The judge said the legacy of Blankenship’s conduct “was visible in the testimony of the miners from Upper Big Branch in this case who described dire working conditions where their safety was routinely compromised and preventable hazards were tolerated.”

Berger announced the sentence to a courtroom full of mine disaster victims’ family members, many of whom sat through day after day of the trial, and some Upper Big Branch miners who survived the explosion and then testified against Blankenship about working day after day with inadequate fresh air, high levels of dust and other problems and still being ordered to keep “running coal.”

The judge, though, refused requests from about a dozen of those miners and family members to speak at the hearing. Berger ruled that they were not “victims” for the purposes of a law that affords victims the right to be “reasonably heard” at sentencing, because Blankenship was not charged with or convicted of causing the explosion.

Berger earlier this week threw out a request from Alpha Natural Resources and federal prosecutors that Blankenship be forced to pay Alpha nearly $28 million in restitution to cover Alpha’s costs in cooperating with the federal probe and paying fines related to the Upper Big Branch Mine’s violations. Alpha bought Massey in June 2011, a little more than a year after the mine disaster. Blankenship had retired in December 2010, taking with him a $12 million golden parachute.

The judge also turned down restitution requests from about 100 individuals, mostly miners and families of miners who had worked at Upper Big Branch.

Blankenship, who refused to answer questions from mine safety investigators after the explosion and did not take the stand in his own defense at trial, did make a short statement on his own behalf before Berger announced his sentence.

Standing at the lectern in front of the judge, Blankenship thanked friends, supporters, his attorneys, the jury and federal marshals, who had provided court security throughout the case. He said he wanted to “express sorrow to the families and everyone for what happened,” but he continued to maintain his innocence.

“Collectively, the 29 men who perished had 400 years of mining experience,” Blankenship said. “The families already know that they were great coal miners. They know that their loved ones are good men and that they did not conspire with me or anyone else to commit violations of the law.”

At that point, Berger stopped Blankenship, reminding him that the cause of the mine disaster was not at issue in the trial or his sentencing.

“I prevented people who lost family members from addressing the UBB mine explosion,” the judge said. “I do not think it’s appropriate for me to hear it from one side and not the other.”

Blankenship then continued, “I was trying to avoid anything that touched on that, but if I did, I’m sorry. I just — I just want to make the point that these men were proud coal miners. They’ve been doing it for a long time. And they’d want the truth of what happened there to be known.”

“Your honor, enough,” he said.

Blankenship apologized and concluded, “OK. Well, I think that’s about all I had to say, other than thank you for the opportunity to say what I did and just reassure the families that their loved ones were great guys, great coal miners.”

Berger has found that Blankenship abused his position of trust as CEO of Massey Energy and was the organizer of the criminal conspiracy, rulings that increased the recommended sentence under the advisory U.S. Sentencing Guidelines from a range of zero to six months to a range of 10 to 16 months.

The judge declined to further increase the guideline range, finding that there was not enough evidence to conclude that Blankenship obstructed the government’s investigation after the mine explosion. A decision that he had — which the government sought — would have increased his guideline sentence to a range of 15 to 21 months.

In either case, though, the maximum jail time would have remained at the statutory limit of 12 months.

Berger found, though, that Blankenship deserved a fine that was far greater than the $3,000 to $30,000 range recommended under her calculation of Blankenship’s sentencing guideline, and ordered him to pay the $250,000 maximum penalty.

The judge said the sentencing guideline for his potential fine did not consider that “the risk of injury and death was present every single day for employees in the mines” or the length and “pervasiveness” of the conspiracy.

“There’s been discussion here about the acquittal of felony offenses and your conviction of a misdemeanor,” Berger said. “Those of us in the legal community put tags on offenses. Congress puts tags on offenses.

“But when we seek to sentence someone, we sentence based on the conduct, which I find to be very serious, not only in its commission but in its potential impact in terms of risk, in this particular case.”

Berger recounted part of Blankenship’s life story — recalling that he was raised by a single mother in Southern West Virginia, attended local public schools and Marshall University. She noted that he became an accountant, rose through the ranks at Massey to be its CEO and had given back to his community.

“Quite frankly, having given a bit — a good bit of consideration to this case, you should be someone that we are able to tout as a West Virginia success story,” Berger said. “Instead of being able to tout you as one of West Virginia’s success stories, however, we are here as a result of your part in a dangerous conspiracy.”