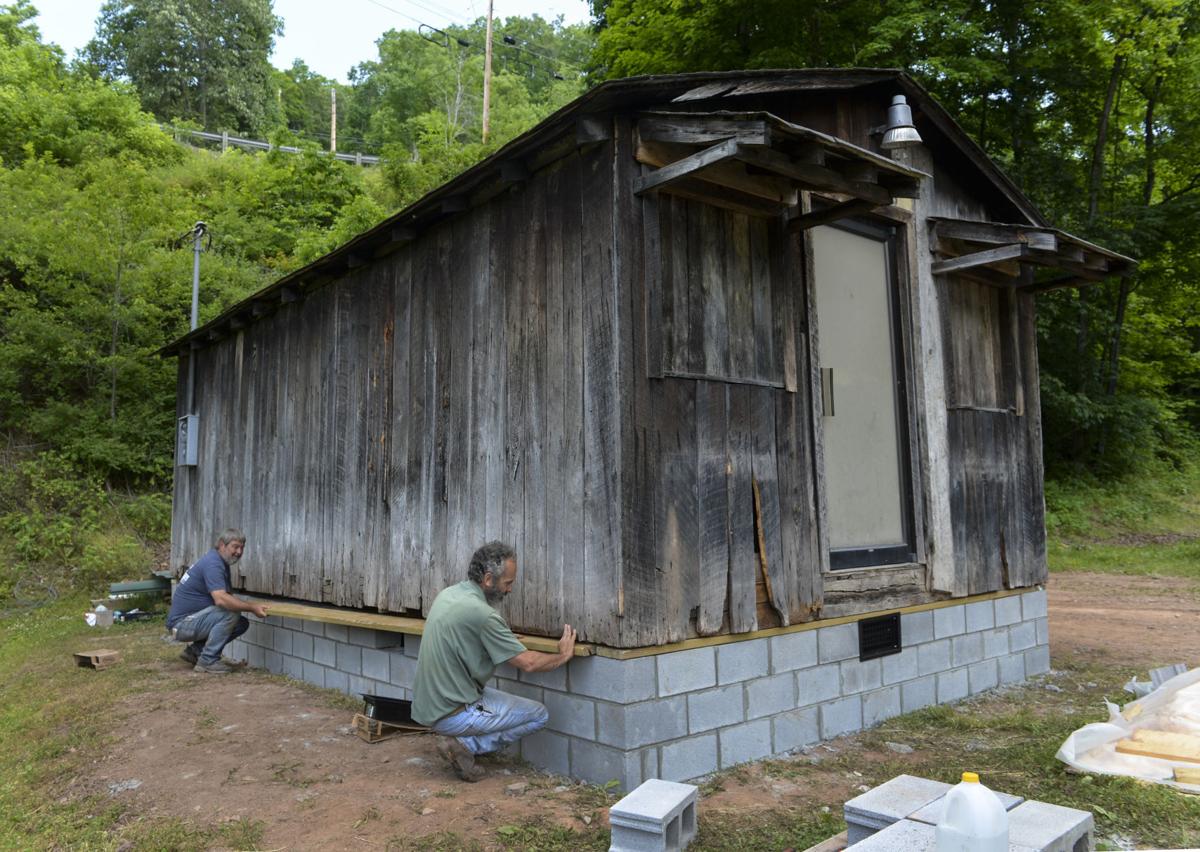 Rick Moorefield and Michael Cales replace the sill on the former engineer’s office used during construction of the second tunnel through Big Bend Mountain at John Henry Historical Park at Talcott in Summers County. 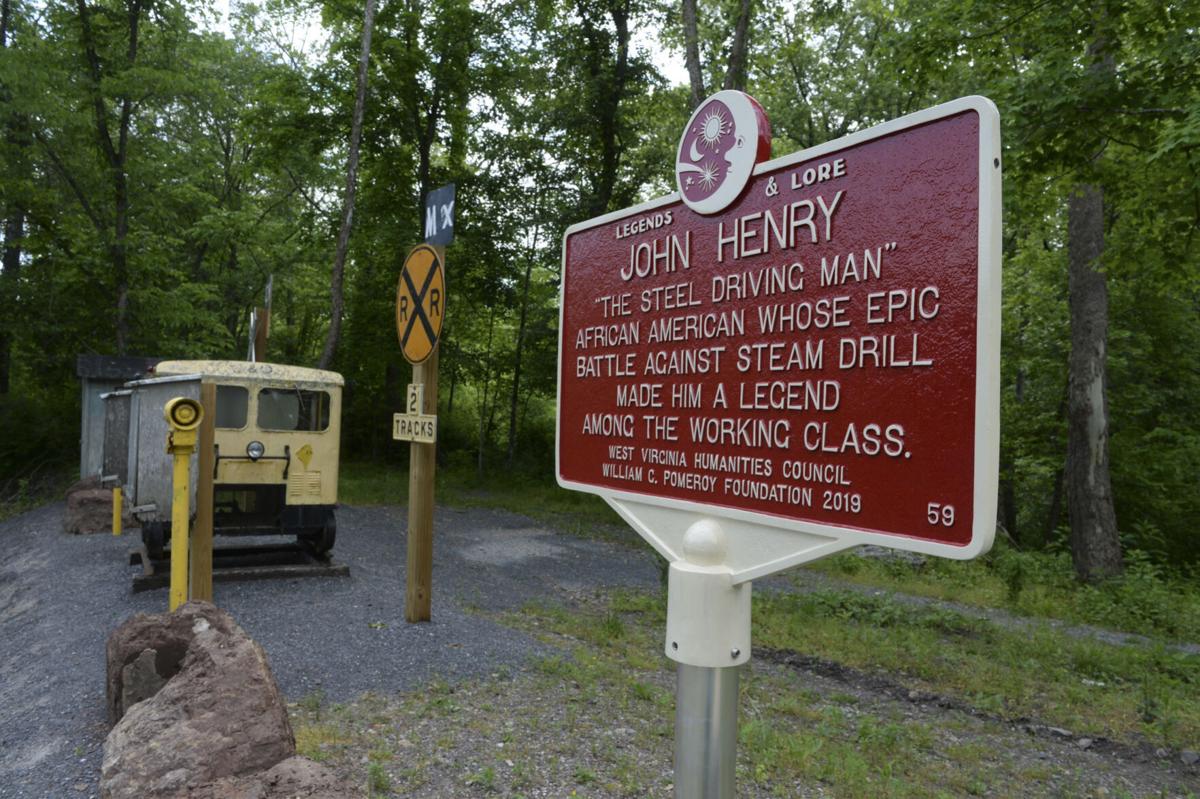 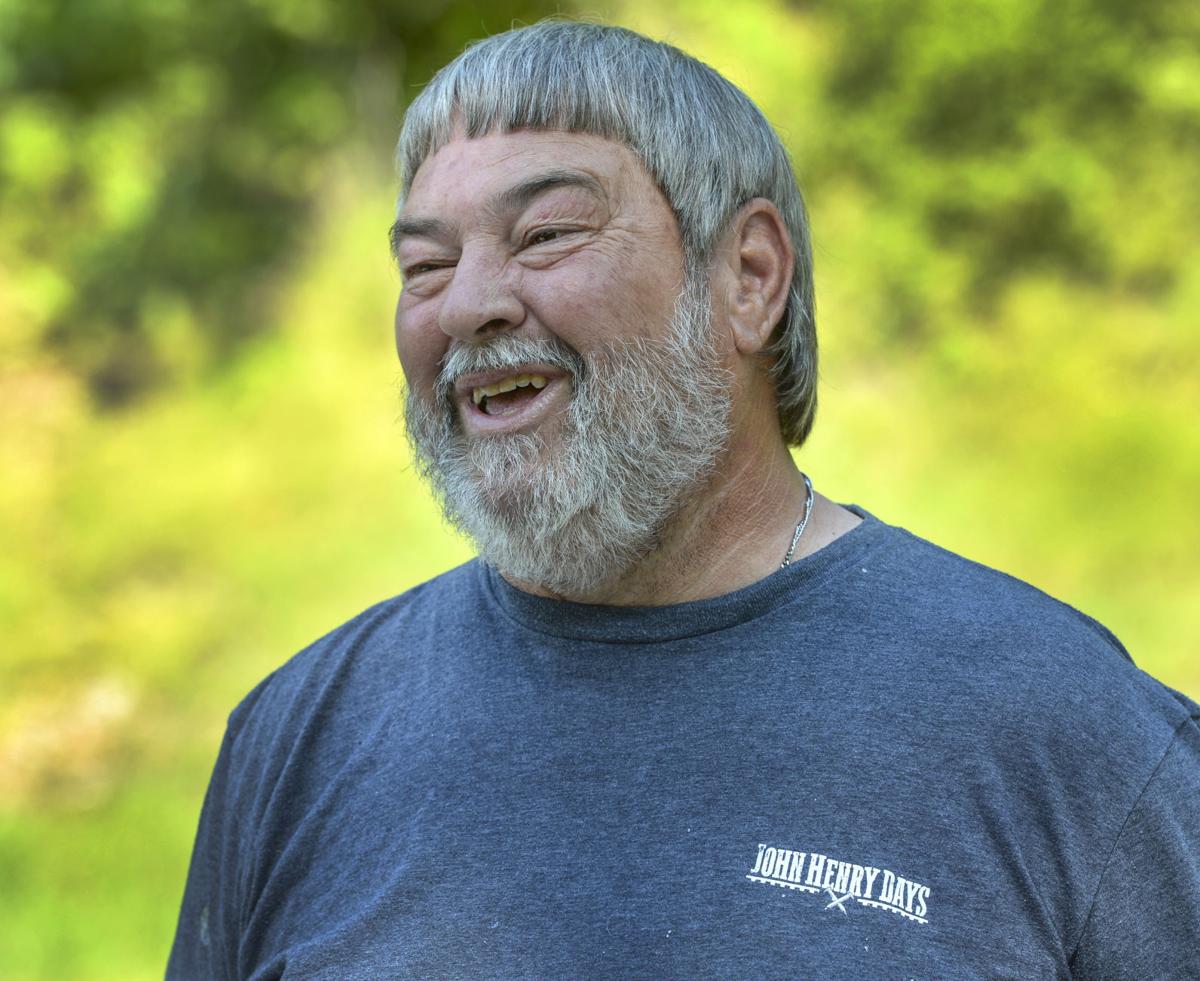 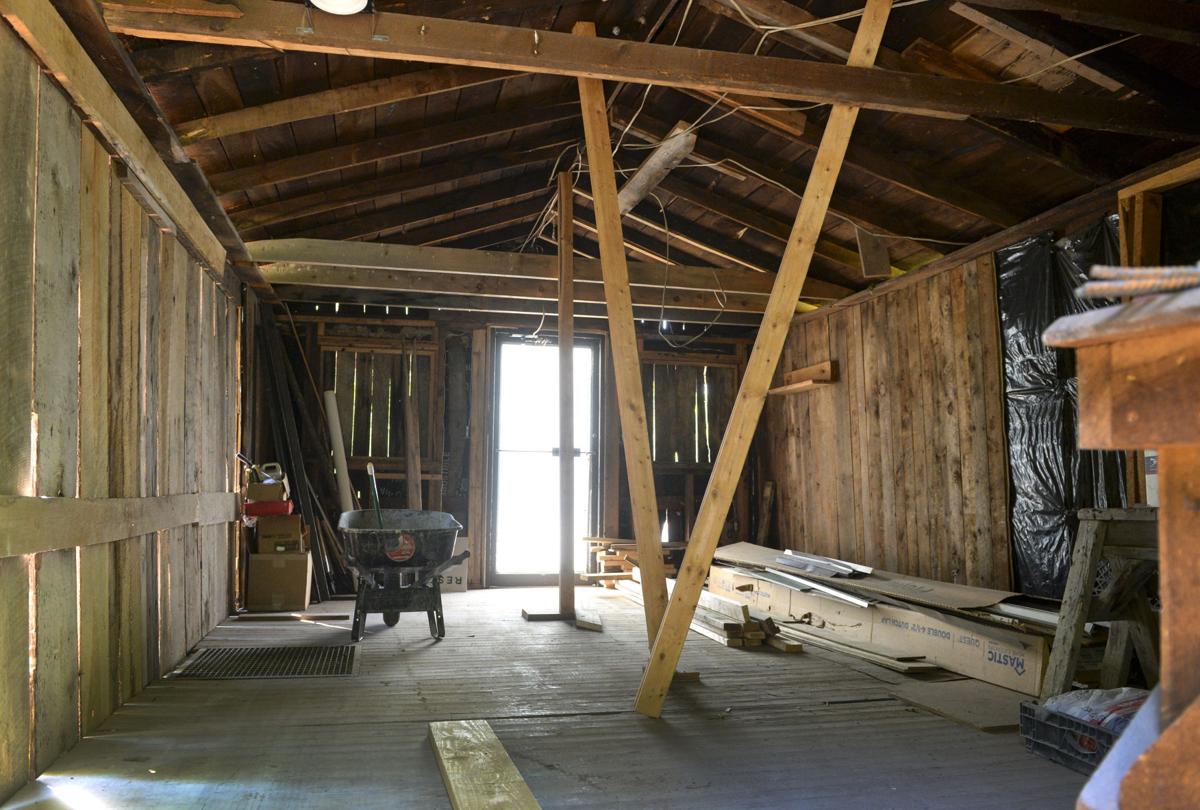 The interior of the historic building is being prepared for the installation of paneling, exhibits of artifacts and a souvenir sales stand, all due to open later this summer. 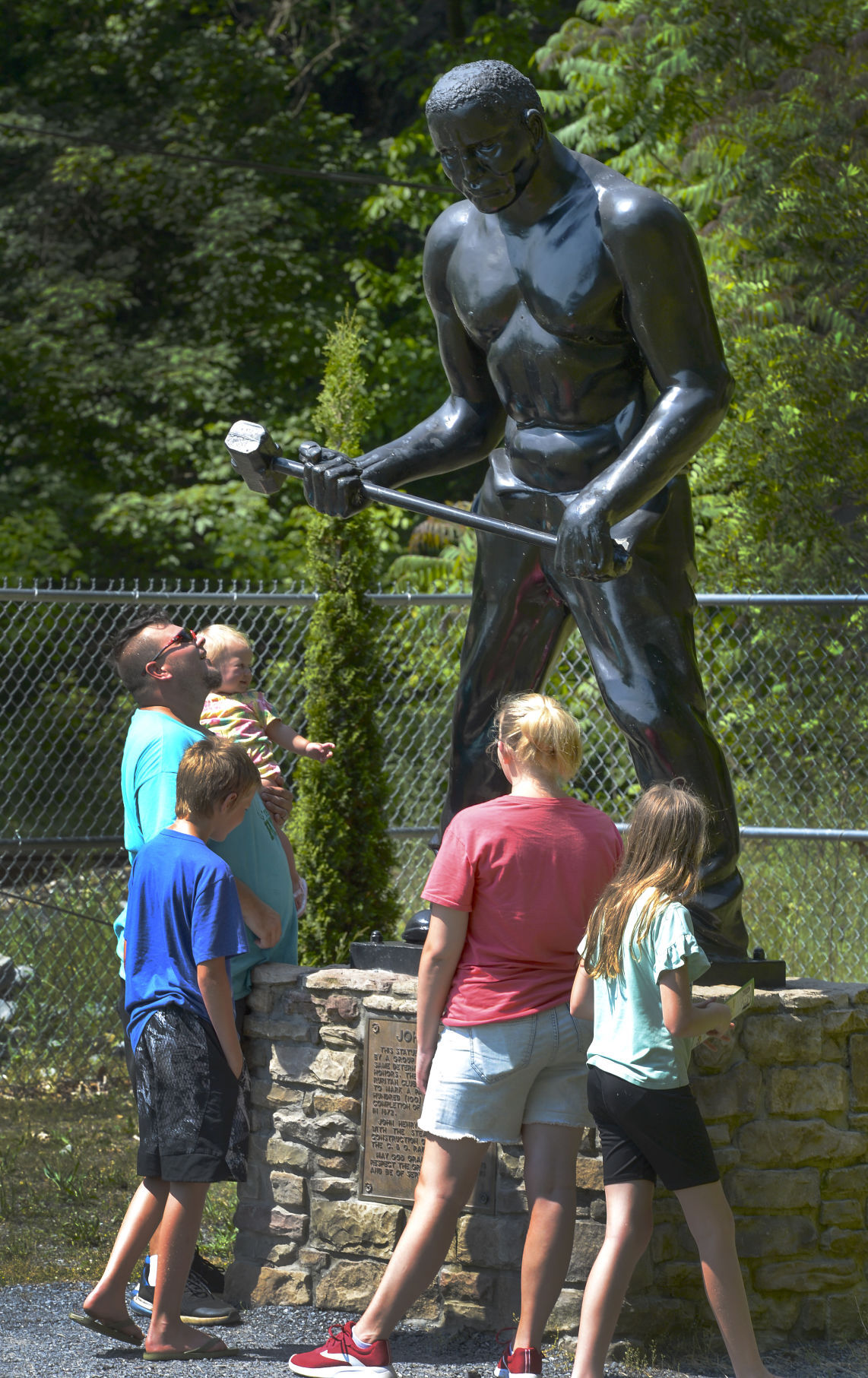 Rick Moorefield and Michael Cales replace the sill on the former engineer’s office used during construction of the second tunnel through Big Bend Mountain at John Henry Historical Park at Talcott in Summers County.

The interior of the historic building is being prepared for the installation of paneling, exhibits of artifacts and a souvenir sales stand, all due to open later this summer.

When Periodical Cicada Brood IX last emerged here in 2003, the park did not exist, except as an idea. That year, the Summers County Commission bought a 26-acre tract between the Greenbrier River and W.Va. 3 adjacent to the eastern portals of the Great Bend and Big Bend railroad tunnels on which the park gradually took shape.

Seventeen years later, the park includes graveled walking trails equipped with interpretive signs and kiosk exhibits telling the story of those who built the mile-long tunnel with hand tools and explosives between 1870 and 1872. The exhibits are illustrated with historic photos and reproductions of paintings depicting the John Henry story by Palmer C. Hughes from the Museum of African American Art in Los Angeles.

The park also features the John Henry Museum in Talcott’s repurposed 115-year-old general store building, a picnic pavilion and a refurbished, pedestal-mounted, 8-foot-tall statue of the Steel Driving Man standing in the path of a cool breeze flowing from the mouth of the historic tunnel.

The newest addition to the park is actually an old one: the worksite office building used by project engineer Dewey Hypes when, from 1930 to 1932, a second railroad tunnel was hollowed out of Big Bend Mountain adjacent to the one built in the 1870s. The tunnels made it possible for trains to reach their destinations faster by eliminating the seven-mile detour needed to bypass Big Bend Mountain and instead follow a horseshoe bend of the Greenbrier River.

“This building has been moved five times since the tunnel was completed, and now it finally has a permanent home,” said Moorefield, a West Virginia University Extension Service agent for Summers County and the park’s project director.

A photograph of Hypes standing next to his car outside the building that appears on a nearby interpretive sign shows that the building now stands on almost the exact spot where it was located 90 years ago.

Since that time, the park’s future interpretive center, built of oak and chestnut wood, has served as a commissary, magistrate’s office, private home and ginseng buyer’s office.

Cales, the park’s designer and construction chief, owned the building for 16 years, at one point using it to house his ginseng business, before donating it to the park. On Thursday, during a break from working on the structure, he held a celt — a polished, cylindrical, foot-long piece of stone used as a woodworking tool by prehistoric native Americans.

“When I tore into the tongue and groove ceiling, this was there,” he said. “Whoever found it first wanted someone else to find it later.”

Moorefield said paneling will be installed inside the building, along with displays of artifacts from the park, a brochure rack and souvenirs. A small deck will also be added.

If the roof of the 150-year-old tunnel can be verified to be secure through an engineer’s report, or failing that, made safe through modest improvements, park boosters would like to eventually open it to visitors, possibly making use of a small train or railcar to traverse the 6,450-foot shortcut.

The tunnel associated with the John Henry legend was used for more than 100 years, closing in 1974 — 42 years after the second tunnel, which remains in use today, opened for rail traffic.

The park was developed by the Hilldale-Talcott Ruritan Club, which began its commemoration of the tunnel and the John Henry story with a statue-equipped roadside park at an overlook on W.Va. 3 atop Big Bend Mountain that opened in 1972.

Ross Evans, whose parents were born into slavery in Virginia and after emancipation opened Talcott’s first restaurant, is credited with being the driving force behind the creation of the first park. Evans grew up in the Talcott area and later worked as a cook and passenger car porter for the Chesapeake & Ohio Railroad. He was a charter member of the Hilldale-Talcott Ruritan Club and as chairman of its finance committee, spearheaded the drive to raise funds for the roadside overlook park.

Among the project’s early donors were Johnny Cash, whose “Legend of John Henry’s Hammer” was a hit on the country charts in the early 1960s, and Jay Rockefeller, then West Virginia’s secretary of state, who went on to represent the state in the U.S. Senate.

John Henry Historical Park treats its namesake as a real-life historic figure rather than a folk legend or fictional character. According to the current park brochure, Henry “was a living American folk hero, whose epic battle against a steam drill took place during construction of the Big Bend Tunnel in Talcott, West Virginia, in 1870.”

Descendants of tunnel workers who remained in the Talcott area heard accounts passed down referring to a real person named John Henry who was hired to drive steel spikes into the face of the tunnel to create narrow openings in which black powder charges were placed. Henry, said to have come to Talcott from either Virginia or North Carolina, was described by a consensus of townspeople from the 1920s as a 30- to 35-year-old black man standing about 6 feet tall, weighing about 200 pounds, and possessing a friendly disposition.

In 1870, according to the park’s website (johnhenryhistoricalpark.com), Henry took part in a contest pitting his skills against the capabilities of a Burleigh steam drill. When the contest ended, Henry had drilled 14 feet into the rock, while the steam drill and its operator created a 9-foot-long opening.

Many folklore accounts have Henry succumbing to exhaustion or apparent heart attack after collapsing at the end of the contest. But researchers from West Virginia University and the University of North Carolina who interviewed townspeople and former tunnel workers in Talcott in the early 1900s turned up a different ending. The majority of those interviewed said Henry survived the contest and continued to work in the tunnel until it was nearly completed, when he died either in a rock fall or after contracting a fever.

Several of those interviewed said Henry was buried in a sandy area adjacent to the C & O’s mainline track right-of-way, about 1,000 feet from the east portal. A sandbar remnant from an arm of the Greenbrier once ran along the right-of-way at the east end of the tunnel, Moorefield said, making a sandy burial place there possible.

A sign along one of the park’s trails points out a sandy area where Henry’s body could have been laid to rest.

Since the park’s dedication ceremony in 2017, about 4,800 vehicles per year have carried visitors to the site, not counting those arriving during Talcott’s annual four-day John Henry Days festival — canceled this year due to coronavirus concerns.

“Visitors come from all over the country,” Moorefield said, shortly before a car with Colorado license plates rolled into a parking area near the tunnel, its two occupants waving. “It’s an economic development tool for the area as well as a historic site.”