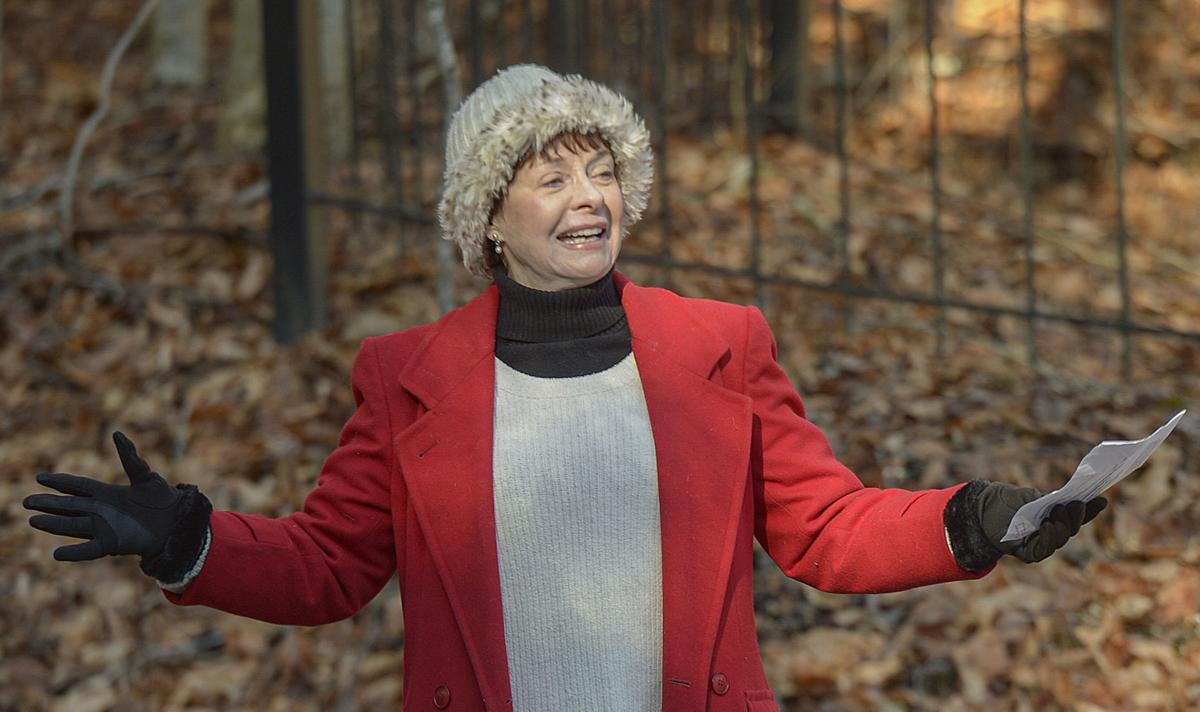 A freshly graveled walkway winds through a burial area for workers, most of them black, who died while building the Hawks Nest Tunnel.

A chainsaw-crafted cross is perched on a stump overlooking the Hawks Nest Workers Memorial Cemetery, near Summersville.

A freshly graveled walkway winds through a burial area for workers, most of them black, who died while building the Hawks Nest Tunnel.

A chainsaw-crafted cross is perched on a stump overlooking the Hawks Nest Workers Memorial Cemetery, near Summersville.

SUMMERSVILLE — Work to mitigate a construction blunder that left a cemetery for black construction workers who died building the Hawks Nest Tunnel buried by the newly toppled trees that once shaded it is now complete, allowing its occupants to rest in peace and share their story with visitors.

Last spring, a contract crew hired by Appalachian Power to clear the right-of-way for a new power line crossing of U.S. 19, a few miles south of Summersville, cut down every tree in the cemetery that lay in the path of the new line.

A number of wooden crosses made by volunteers to mark the graves of the 42 Hawks Nest Tunnel workers, most of them black, known to be buried there were crushed by the felled trees, which also gouged out sections of surface vegetation.

Several native hemlocks that had been inoculated to guard against infestations of the deadly insect pest hemlock woolly adelgid were also brought down during the right-of-way work. Unsightly and hazardous waist-high stumps were left jutting up from the burial ground at random locations.

The Hawks Nest Workers Memorial Cemetery, also known as the Whippoorwill Cemetery due to its proximity to Whippoorwill Road, is located 5 miles south of Summersville in a wide section of median separating U.S. 19’s northbound and southbound lanes.

Those buried here are among at least 764 — and possibly as many as 2,000 — workers who died during the depths of the Great Depression building the Hawks Nest Tunnel, a 3-mile-long rock-encased flume that still feeds the project’s original hydroelectric plant just outside Gauley Bridge.

The sandstone rock through which the tunnel was built is rich in silica, which when inhaled without respiratory protection, as was the case with those who toiled at Hawks Nest, leads to contracting silicosis, a debilitating, incurable and often fatal lung disease.

About three-fourths of the tunnel workers at Hawks Nest were black. Most of them traveled hundreds of miles from homes in Virginia and points south with the intention of working hard at the West Virginia project to better the lives of their families in a time when jobs were scarce. At Hawks Nest, they toiled 60-hour weeks for 25 cents an hour, considered decent pay for the era.

But the ever-present and never-filtered silica dust they encountered on the job quickly took a toll on their lungs, preventing them from achieving their goals. According to research by a West Virginia University geology professor, 60 percent of the Hawks Nest workers were no longer able to work after toiling underground for just two months, while 80 percent were sidelined after working underground for six months.

Nicholas Chronicle Publisher Charlotte Yeager, who championed the effort to improve and promote the cemetery, had been aware that somewhere in Nicholas County, there existed an unmarked burial ground for unidentified black Hawks Nest Tunnel workers. She tried to find it for several years before reading a 2008 Charleston Gazette account about the graveyard being located by Richard Hartman, a history professor who then worked for the University of Charleston.

Hartman, too, had been on the trail of the cemetery’s whereabouts for some time. While poring through records from the deadly Union Carbide project’s 1930-1935 construction era, he learned that a mass burial site for black workers had been established in a corner of a pasture on a farm owned by the mother of Summersville funeral director Hadley White.

Use of the burial pit at the farm began when no more space was apparently available in a former slave cemetery in the Summersville area. Jim Crow laws in effect in West Virginia during the 1930s prohibited burying the black workers in a “white” cemetery. So, White and his associates, often under cover of darkness, transported the remains of dozens of African American silicosis victims from the work site and associated workers’ camps to the farm for interment.

But by the time Hartman learned the location of the burial site on the White farm, the workers’ remains had been removed to make way for the widening of U.S. 19 to four lanes. A followup search of Division of Highways records showed that the bodies had been re-buried in a small cemetery on a site a few miles from the farm, on which a small subdivision had been planned.

As it turned out, that property, too, had been bought by the DOH as part of the construction corridor for the widened highway. But further disturbance of the graves was not called for, since the strip of land containing the cemetery ended up becoming part of a wide median area between the northbound and southbound lanes.

Using a DOH map that denoted the site of the graveyard, Hartman found its supposed location, which at first glance appeared only to be a thicket of weeds surrounded by maturing timber, an illegal open dump and a disposal zone for roadkill deer. But a closer look gave him a view of metal tags marking dozens of grave-sized depressions with numbers, but not names.

After meeting Hartman and viewing the site, Yeager became determined to elevate it from a roadside eyesore to a peaceful resting place surrounded by natural beauty, where people could come to honor those who tragically lost their lives while trying to claim their share of the American dream.

“The people who came here to work had such hard lives and so little voice in how they were treated,” she said. “They deserve to be remembered and have their story told.”

The idea of converting the forgotten weed patch graveyard into a place of honor and historical reflection resonated with residents of the Summersville area, as well.

In addition to individuals who removed trash and pulled weeds, DOH personnel and Army National Guard soldiers used their construction equipment to build a parking area and remove debris. Students from New River Community and Technical College fabricated the metal fence that surrounds the cemetery. A Boy Scout troop from Utah, attending the Jamboree at the Summit Bechtel Scouting Reserve, built and graveled a walkway that winds through the site.

Work on the cemetery was completed seven years ago. Since then, Yeager has tracked down the identities, and in many cases, death certificates of its occupants.

With so much progress being made, the damage caused last spring came as a shock to those who helped build and maintain the cemetery.

“When I first saw what happened last spring, I thought the cemetery was ruined forever,” Yeager said on Wednesday. “I thought it would never be possible to have it looking as good as it does today.”

In May, a group of Appalachian Power officials met Yeager at the cemetery to view the damage. At the end of the walk-through, they agreed to make repairs and make things right, in consultation with Yeager.

On Wednesday, the group returned to the cemetery to view the completed repair project, which included plantings of redbud and dogwood trees, ground-cover greenery lining the cemetery’s newly graveled walkways, extensive mulching, and the removal of all stumps above ground level.

All debris from the downed trees was gone, brush was cleared and rows of modest wooden crosses, freshly painted white by cemetery volunteers, marked the graves.

Appalachian Power officials Phil Wright, vice president for distribution operations, Ronn Robinson, external affairs chief for the Beckley area, and Phil Moye, corporate communications officer for West Virginia, presented the Nicholas County Historical and Genealogical Society with a check for $4,000 to pay for additional cemetery improvements. They include a monument in the form of a tunnel-like archway to be inscribed with the names of those buried there.

Yeager said the number of names may eventually be more than the 42 now identified as occupying the cemetery. New research, she said, indicates that additional burials were made at the cemetery, possibly boosting the number of burials here to as high as 70.

“Mistakes happened here at the cemetery, but I think all the work that’s been done here since then says a lot about this company and what they did to right a wrong,” Summersville Mayor Robert Shafer said during Wednesday’s cemetery visit.

“I think it’s fitting that today is a bright day as well as a cold one,” said Robinson. “It sheds light on the rejuvenation of a solemn location.”