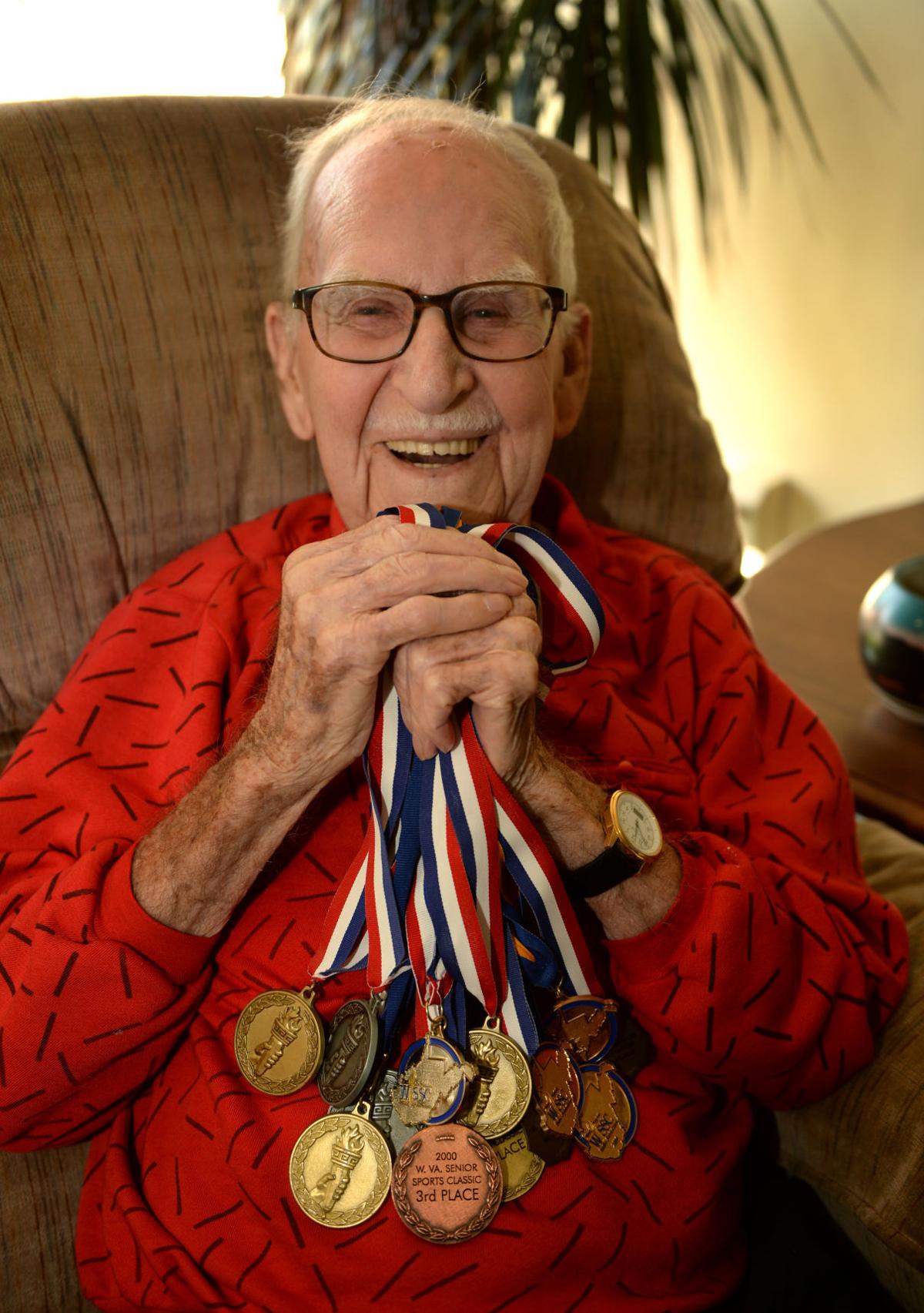 Avid athlete Ray Hubbard, 103, clutches some of the medals he won in Charleton’s Public Courts Tennis Tournament. He figures he earned about 75 of them. 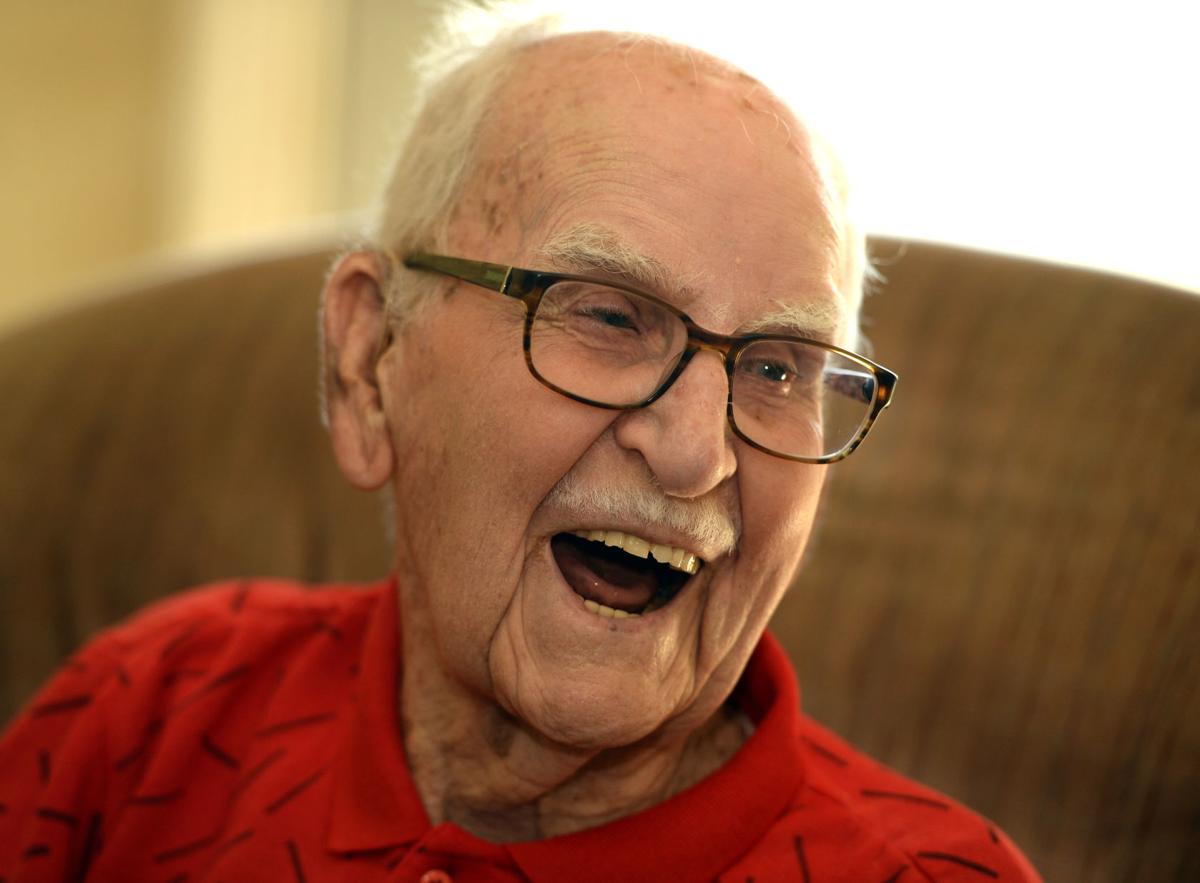 “My favorite exercise is running. You can run until you are blue in the face playing tennis. I must have run around the world at least once.” 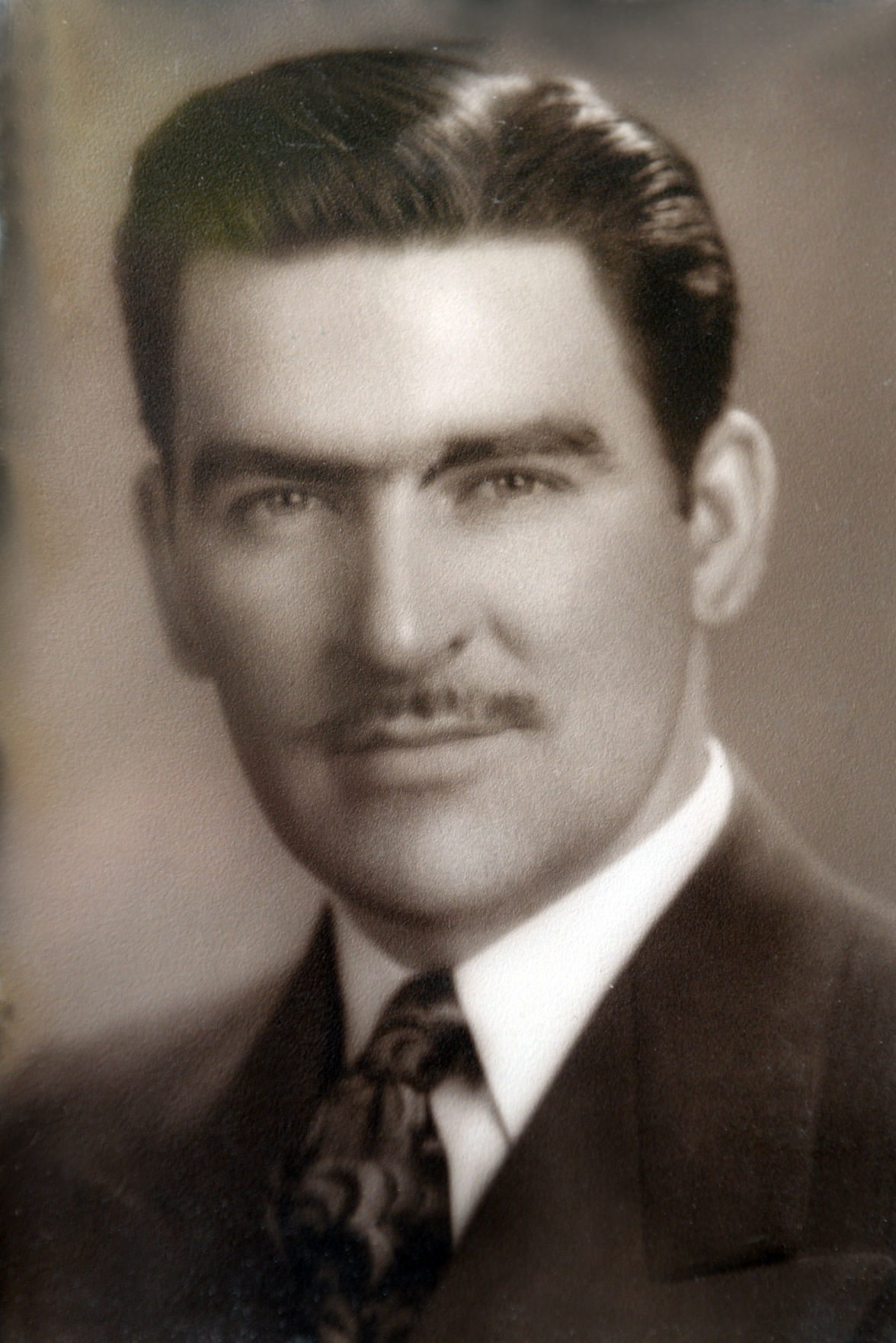 In his mid-20s, Ray Hubbard was working as purchasing agent for the manager of the town of Milburn. 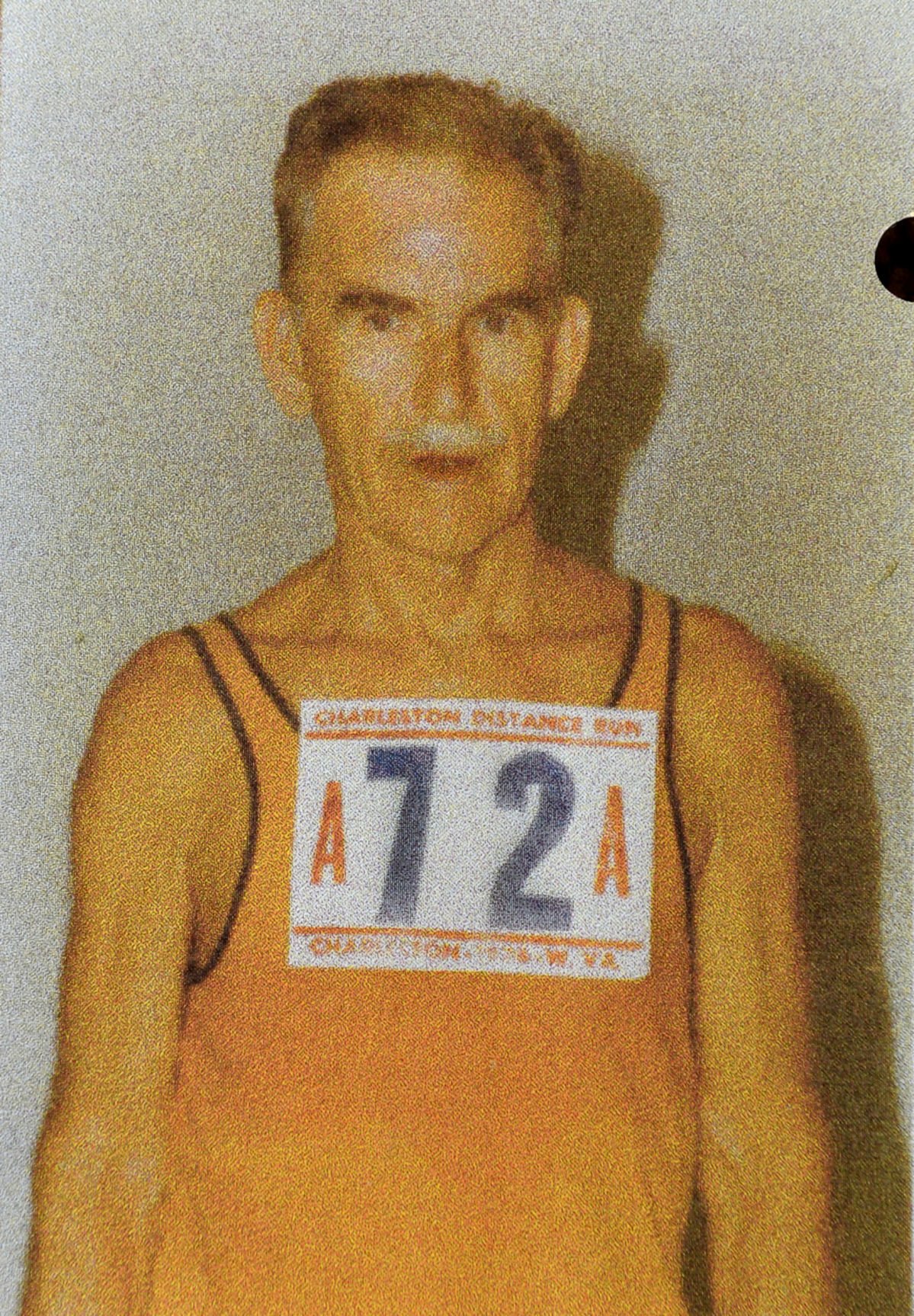 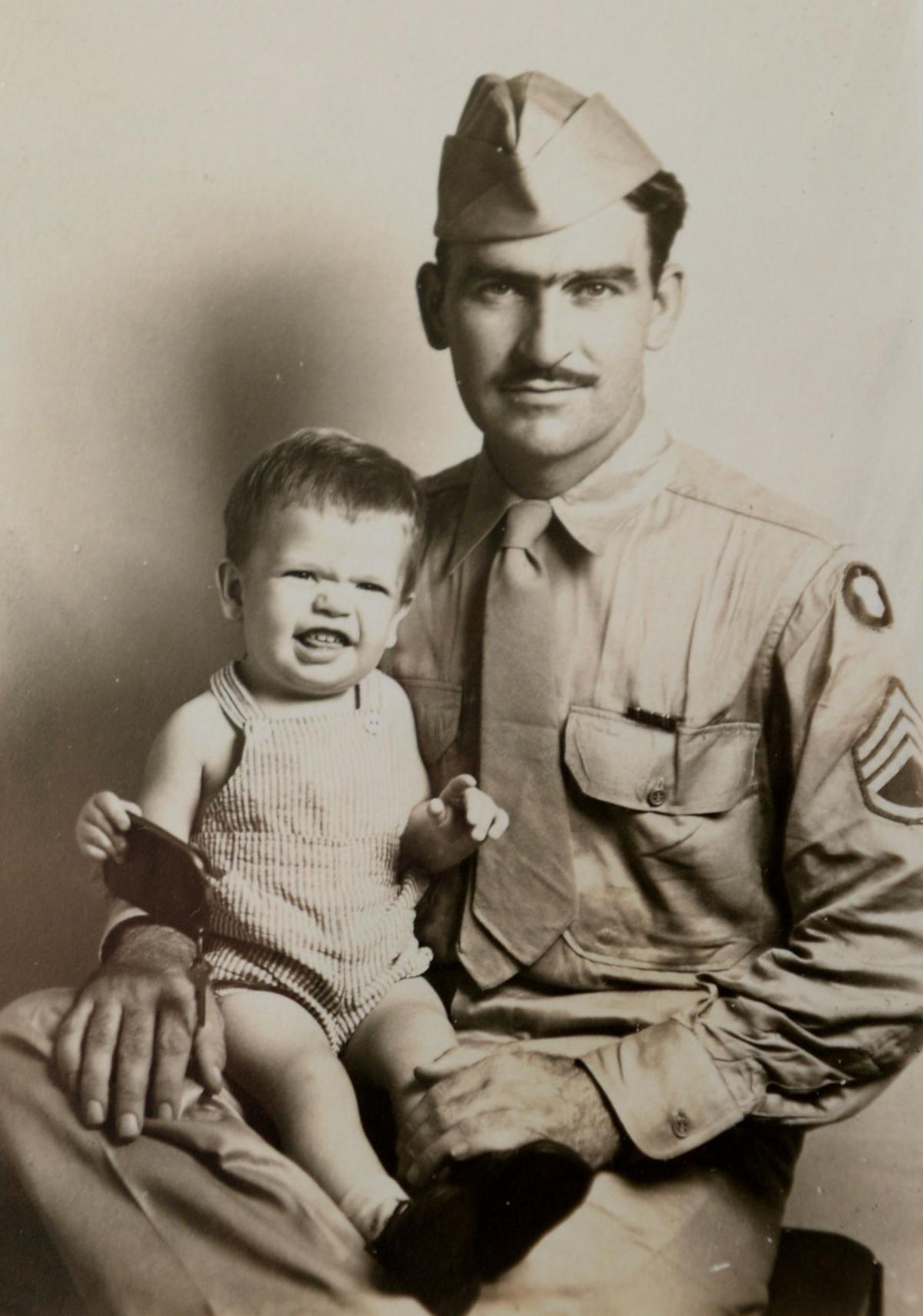 During his stint in the Army, Ray Hubbard had his picture taken with his son, John.

Avid athlete Ray Hubbard, 103, clutches some of the medals he won in Charleton’s Public Courts Tennis Tournament. He figures he earned about 75 of them.

“My favorite exercise is running. You can run until you are blue in the face playing tennis. I must have run around the world at least once.”

In his mid-20s, Ray Hubbard was working as purchasing agent for the manager of the town of Milburn.

During his stint in the Army, Ray Hubbard had his picture taken with his son, John.

Age is only a number. Ray Hubbard never paid much attention to it.

He first picked up a tennis racquet at age 40 and excelled in the sport well into his 90s. Dozens of medals attest to his prowess on the courts (despite the increasing scarcity of 90-plus partners.)

At 58, he entered the first Charleston Distance Run, an official outlet for his favorite exercise. At 65, he took note of the Kanawha River, converted a power boat into an 8-foot sailboat and took up sailing.

Even the military was a belated deal. Drafted at age 29, he served during the last days of the Battle of the Bulge. An infantryman, he zipped through the ranks to staff sergeant in charge of machine guns.

In his impulsive, 103-year journey through life, Raymond Hubbard never let age stand in the way of desire or duty.

He grew up in Milburn, a classy, self-contained coal camp in Fayette County that generated its own power.

For years, he was purchasing agent for the town’s manager.

Don’t expect a shriveled old man in a wheelchair. Except for hearing loss, he hasn’t bowed much to the usual ravages of aging.

He laces detailed anecdotes about his life with the uplifting humor that has nourished his longevity.

“My father was an electrician in the mines and West Virginia had become electrified. They had used ponies to pull the cars through the mines.

“I was the second of nine children. In West Virginia, We lived in Milburn, a first-class coal camp and a very special place. The city of Indianapolis used artificial gas for the city, not natural gas lines from the gas company.

“They produced the artificial gas and one of their principal products was foundry coke used by the steel mills. They came up with the idea of separating the gas for the whole city. They got a 50-year lease of this property from Indianapolis for that particular coal seam.

“Milburn had a sewer system. You don’t envision coal camps with indoor bathrooms. They built this community with about 70 houses.

“I caught the fancy of the town’s general manager when I was 7. He admired little boys, especially if they were spunky.

“He gave me the first work I was paid for — mowing his grass. He had a large residence with a very large lawn and flower beds that had to be worked on. I also passed papers.

“Growing up, I wanted to be a horse. I thought a horse was the most beautiful thing in the world. I didn’t want to ride one. I wanted to BE one. I would have traded my soul with a horse. Imagine a horse having that proposition that he could swap.

“In studying my genealogy, I found that one of my ancestors owned the horse Man-O-War, so maybe some of that rubbed off.

“I graduated from Montgomery High School, class of 1933.

“When I was 22, I had double pneumonia and was in the hospital 12 weeks. They didn’t expect me to make it.

“I went to work for the manager of the town again.

“I went in the service in 1943 and served about a year. I had become a key employee. I was the purchasing agent. Before the war, they had a rearmament of the country. We had to get ready. I became the employee in charge of that deal.

“The manager, incidentally, was on the draft board for the county. There was no way I was going to be drafted.

“And I felt considerable obligation to the company, which had treated me famously. The time came when this manager retired. That released me somewhat.

“I was in infantry replacement, a private in the Army assigned to the 87th Division, Company C. I was in a machine gun section of a rifle company, a new recruit, the tail end of the team. In 28 days, I was the leader of the whole kit and kaboodle. As people were wounded or displaced, I moved up to staff sergeant in charge of the machine gun section where I stayed for the rest of the war.

“Was I in harm’s way? Every day. The 87th Division had little green ribbons they gave you saying you were a combat leader.

“When the war ended, we were in Czechoslovakia where we met Russian forces. We let the Russians take Berlin. We said, ‘Go for it, boys!’

“When I got home, I went right back to my same job. Then the whole outfit was sold to another company.

“I worked for Virginia Electric as an outside salesman and then for Banks-Miller. When I retired, I was part owner of Regal Construction.

“In Milburn, in all the places I lived, we never had a tennis court. Driving into Charleston, bingo, all of a sudden there are those public courts in Kanawha City. So at the age of 40, I bought my first tennis racket.

“My favorite exercise is running and you can run until you are blue in the face playing tennis.

“I ran into a couple of neighbors who were about the same age and skill level and we played tennis together like the Three Musketeers.

“I had about eight or 10 of these great big beautiful trophies. And every one of them was for second place.

“I was the last champion of the 95 and over age group. They’ve never had that event since, so I will always be defending champion in that age group.

“In 1973, I entered the first Charleston Distance Run. I ran in three races.

“I took to sailing. When I was 65, I was jogging and I was looking around and all of a sudden, I discover the Kanawha River. I’d been running right by it every day.

“A boat. I wanted a boat. My original idea was to get a rowboat. One of the stores downtown was closing and they had some boats. I was going to get an inflatable boat. That was a bad deal. About the same time, this guy put up for sale an 8-foot power boat. The theory, the operation is the same whether you have the Queen Mary or an 8-foot sailboat, so I converted a power boat into a sailboat.

“I had the whole Kanawha River to myself. For about 10 years, if you saw a sailboat on the river between Marmet and downtown, that was me.

“Looking back, I have to be the luckiest guy in the world to survive all the scrapes I went through. I would just as soon do it all over again, the whole package.”