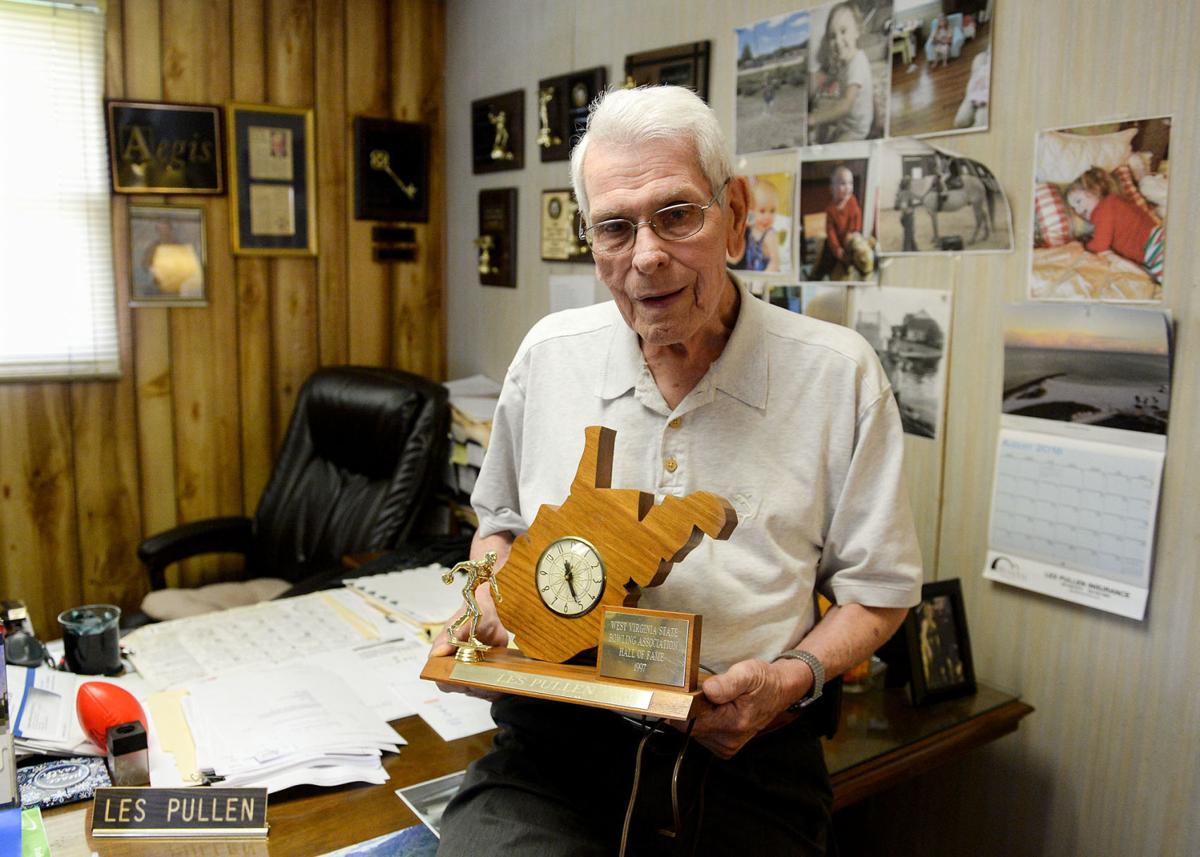 In his homey office in Marmet, longtime insurance agent Les Pullen displays the clock awarded to him in 1997 by the West Virginia State Bowling Association. He earned Hall of Fame recognition primarily for his administrative work on behalf of the organization. 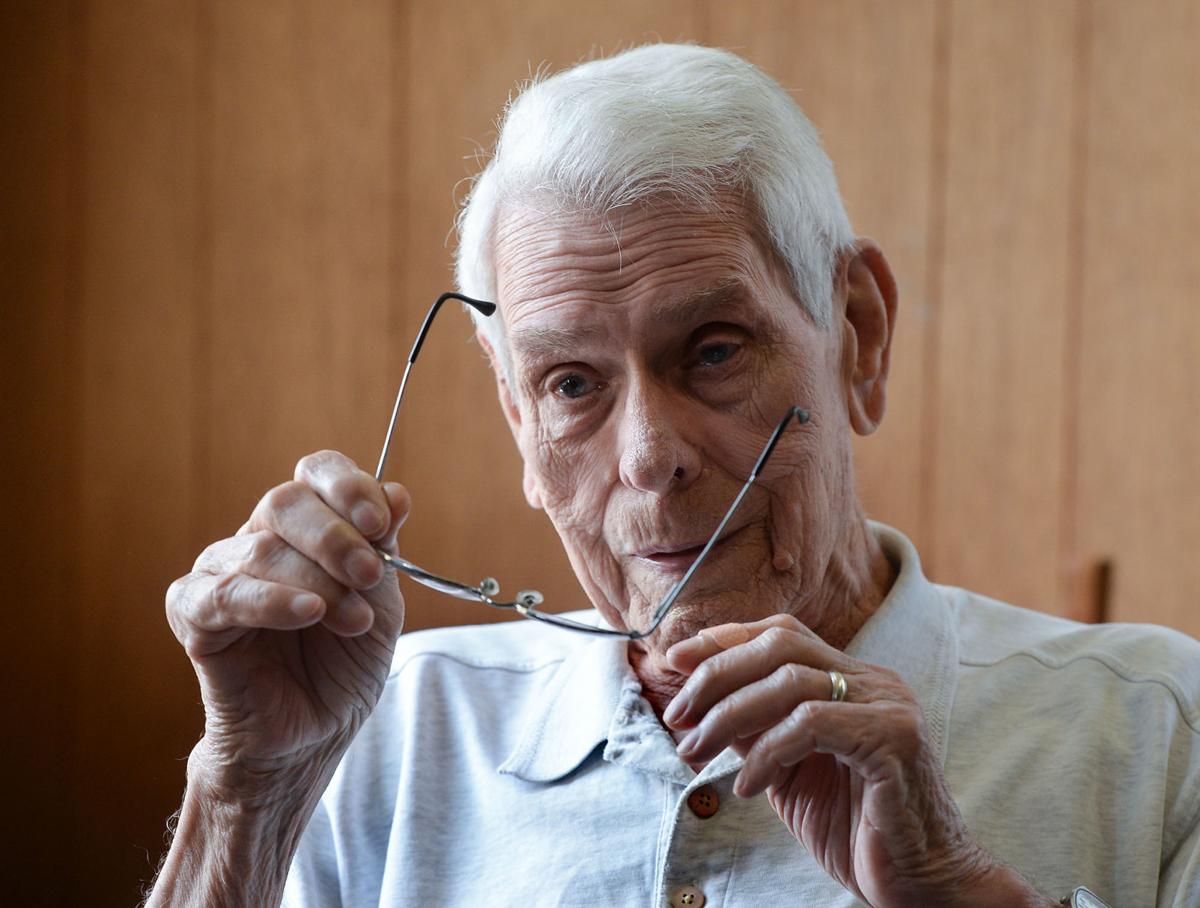 “My mother taught me to play guitar. She taught me three chords and that was about it. I took it from there.” 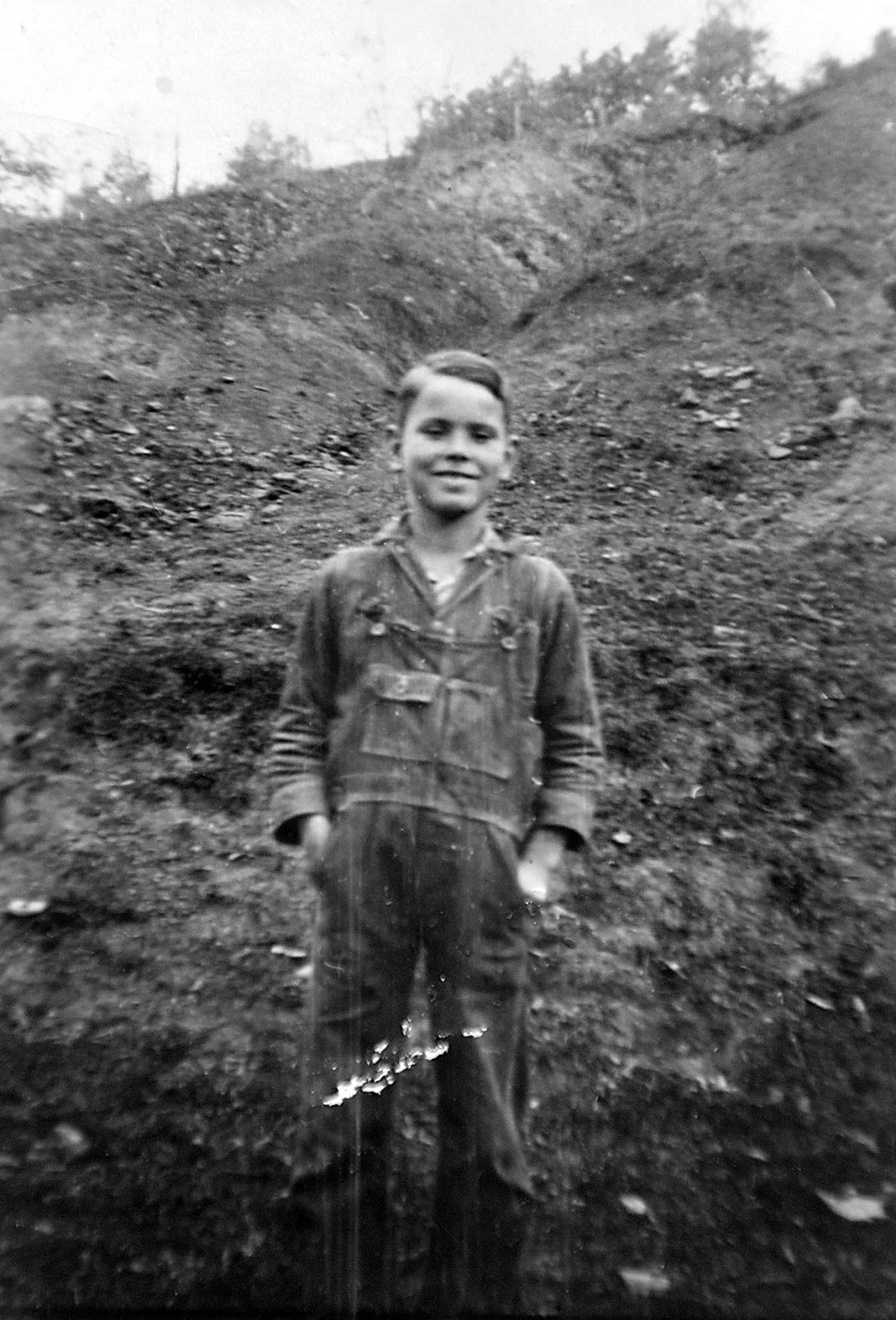 This snapshot shows Les Pullen as a 10-year-old on the family farm in Putnam County. 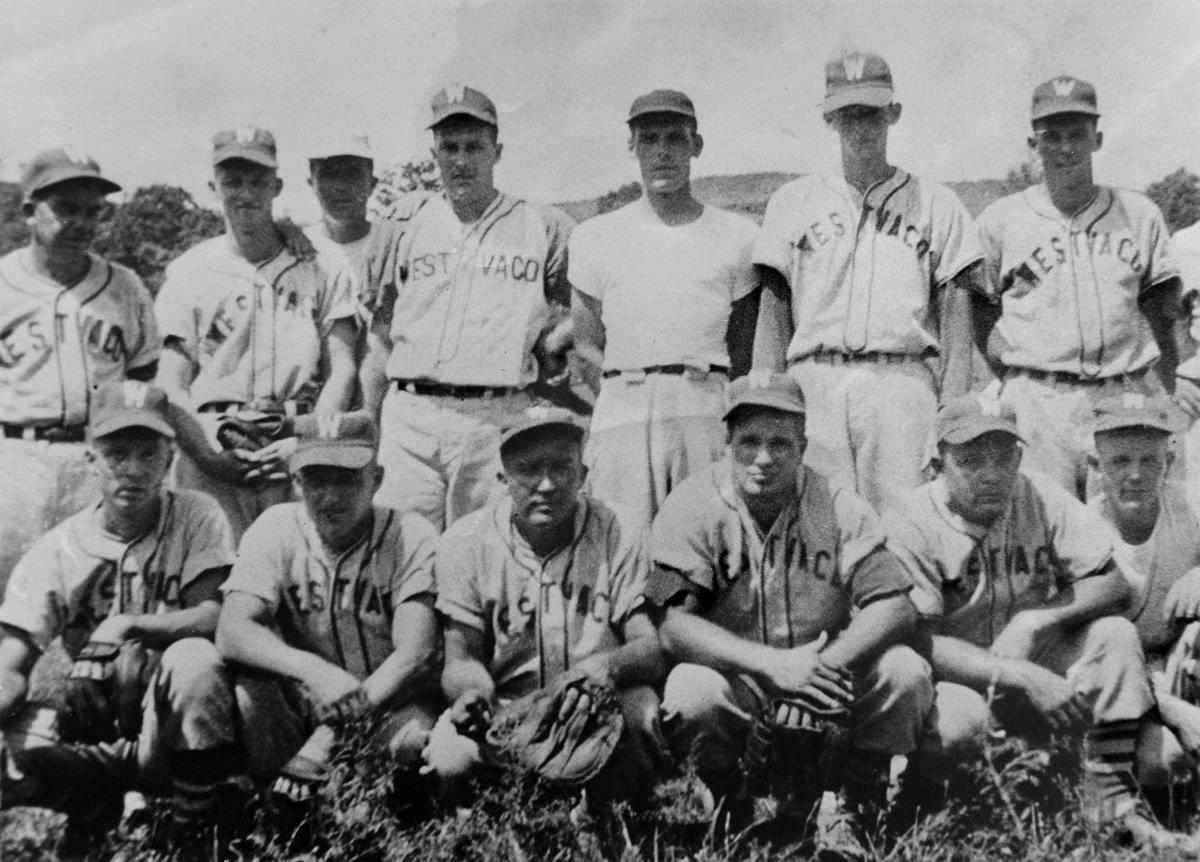 For 12 years, Les Pullen (back row, without jersey) played industrial league baseball for Westvaco. He didn’t wear his jersey, he said, because he didn’t know a photographer would be taking a team picture. 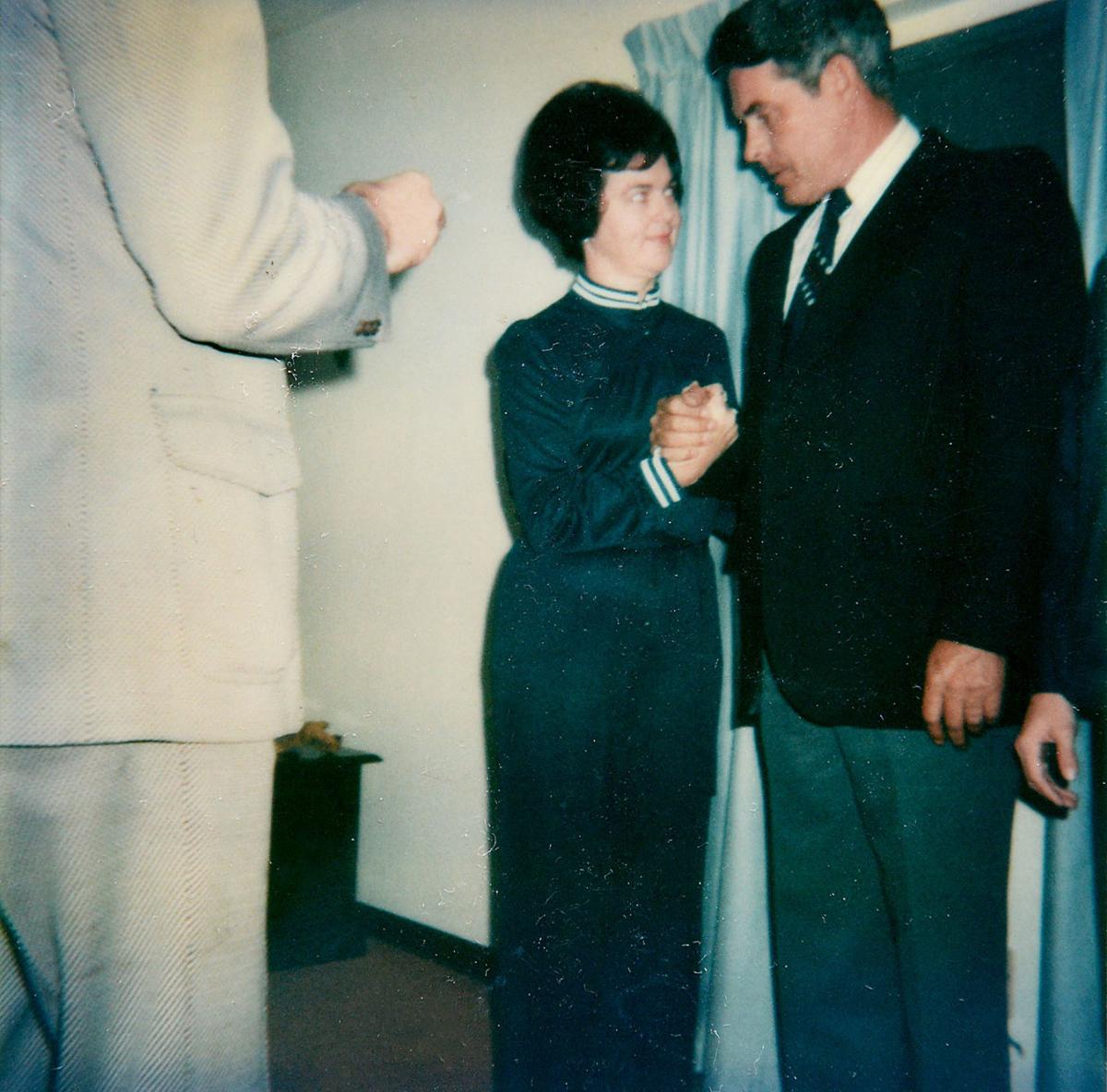 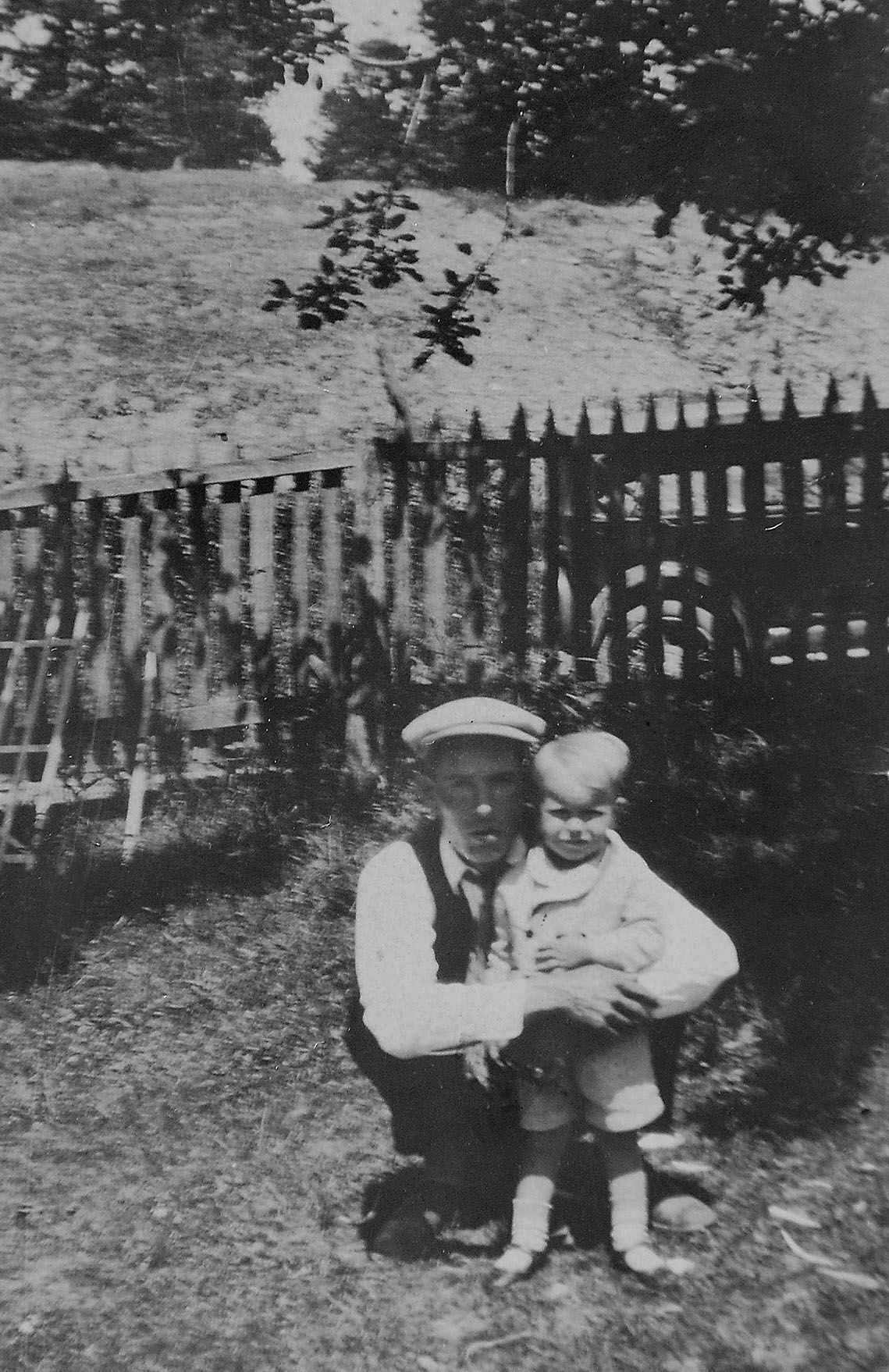 At age 2, Les Pullen was photographed enjoying a moment with his father, Roscoe, on their Putnam County farm. 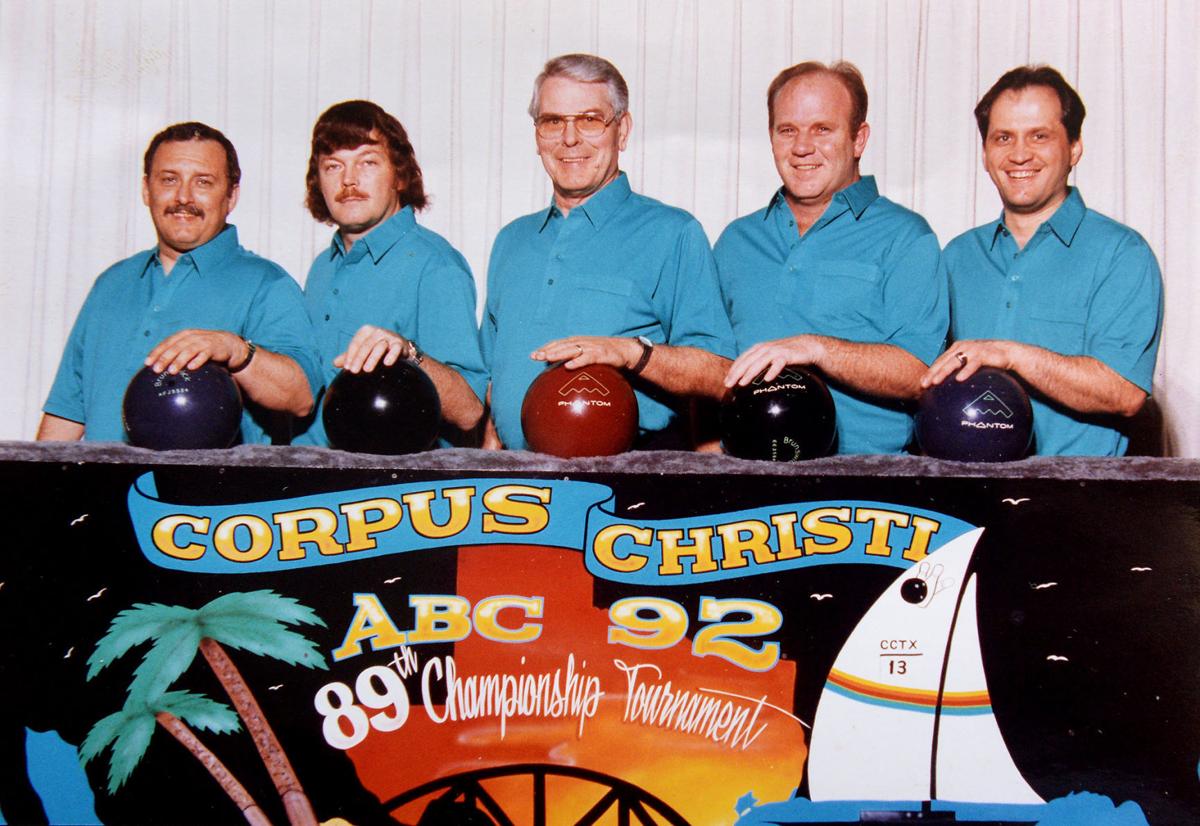 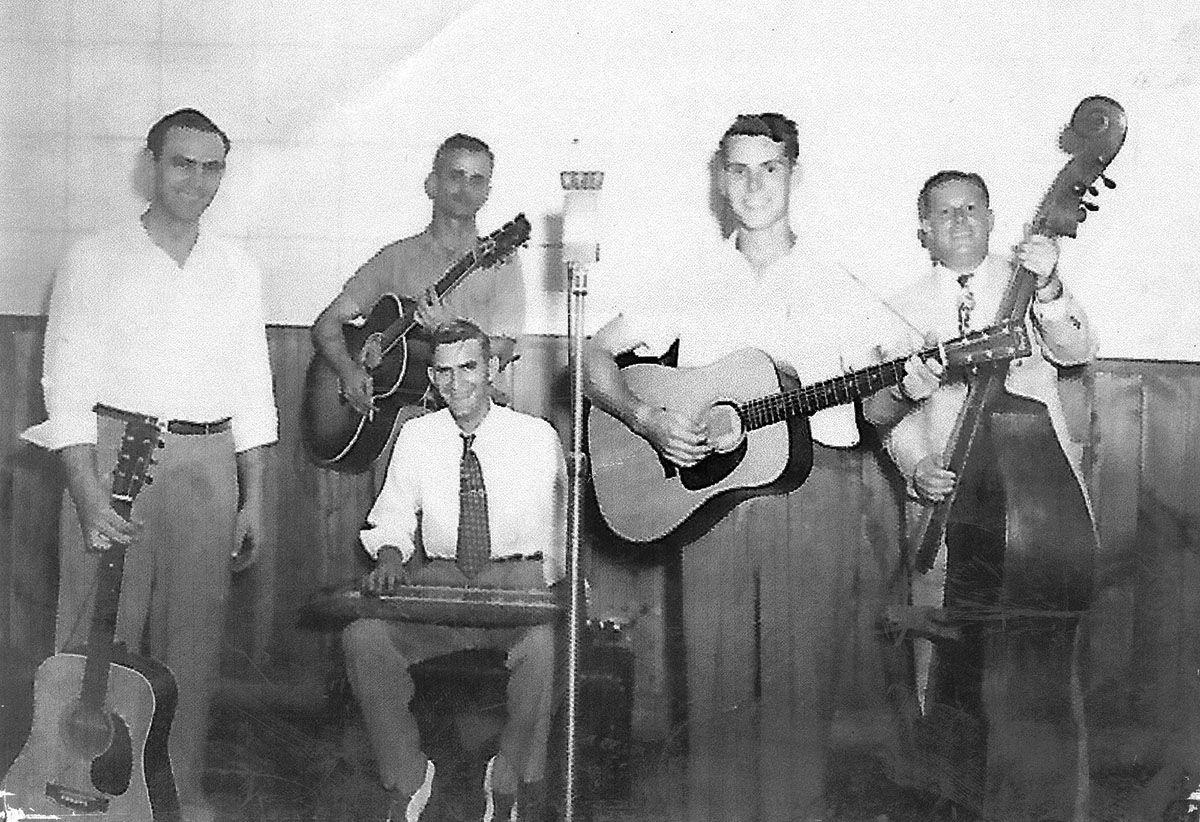 In the early 1950s, Les Pullen played lead guitar in a band. They performed on the radio and in regional bars. He went on to start the Kanawha Valley Jamboree.

In his homey office in Marmet, longtime insurance agent Les Pullen displays the clock awarded to him in 1997 by the West Virginia State Bowling Association. He earned Hall of Fame recognition primarily for his administrative work on behalf of the organization.

“My mother taught me to play guitar. She taught me three chords and that was about it. I took it from there.”

This snapshot shows Les Pullen as a 10-year-old on the family farm in Putnam County.

For 12 years, Les Pullen (back row, without jersey) played industrial league baseball for Westvaco. He didn’t wear his jersey, he said, because he didn’t know a photographer would be taking a team picture.

At age 2, Les Pullen was photographed enjoying a moment with his father, Roscoe, on their Putnam County farm.

In the early 1950s, Les Pullen played lead guitar in a band. They performed on the radio and in regional bars. He went on to start the Kanawha Valley Jamboree.

He dabbled in this. Dabbled in that. Would-haves and could-haves punctuate his multifaceted life. Baseball player. Musician. Songwriter. Jamboree promoter.

Regrets? No should-haves here. He doesn’t look back like that. Les Pullen flirted with several vocations, but at 90 years old, still working every day, he’s satisfied with the twists and turns that led him to sell insurance.

In 1978, in a homey office on the main drag of Marmet, he opened Les Pullen Insurance. Change surrounds him, but the modest office across from Wendy’s remains same as always.

A Putnam County farm boy and a natural-born pitcher, he dreamed of a professional baseball career. In high school, he tried out for the Reds and Cardinals. Deemed too young for pro ball, he starred in the industrial league as a pitcher for Carbide and Westvaco.

He spent years in the financial field, then helped Tiny Parsons build Turnpike Ford as the dealership’s first salesman. He smoked and drank and had a band that played in every dive around.

He started the Kanawha Valley Jamboree in Marmet. He won a Hall of Fame award for his work with the valley bowling organization.

Bolstered by the mandatory car insurance law, his business prospered. The work grounded him. He enjoyed it enough to hang on for 39 years.

This is the pure should-have that defines his life.

“I graduated from St. Albans High School in 1947. I played on the first baseball team St. Albans ever had. I was the pitcher. I was pretty good.

“In the ninth grade at St. Albans, the only thing I’d ever done close to being a pitcher was throw rocks at the squirrels in the trees out there in the country. Then one day me and some boys were out behind the old St. Albans High School. Somebody had a catcher’s mitt and somebody had a baseball, and we were just throwing pitch and catch. I could throw pretty hard even as a ninth-grader.

“I tried out for the Reds and the St. Louis Cardinals. I probably could have got a contract with the Cardinals. I didn’t tell them I was only a junior in high school. I went through the process and all the tryouts. They were interested, but they found out I was just a junior and told me to come back next year. But I got married and decided to forego any attempts to play professional baseball.

“I went to work for Carbide for three years and played baseball for them. Carbide hired me more or less as a ballplayer. They would find a job for you. I ended up at Westvaco. There’s a team picture here with Carl Dunlap. His son, Steve, coached at WVU. I played with Lew Burdette, the World Series hero. I was on same team with him for three years.

“I decided to be a banker. I worked in the financial field for about nine years. I ended up managing a finance company.

“Then I spent 14 years in the automobile business. I helped start Turnpike Ford. I was the first salesman hired there. Me and Tiny Parsons and a couple of other guys started it. Tiny was working at Joe Holland Chevrolet and took a notion to get into the business. With help from Bert Wolfe and Harvey Shreve, he got that franchise.

“He was a generous man. He gave away more money than anybody in the world except maybe for Alex Schoenbaum.

“Did you know Ike Ganim? He was an All-State agent in Kanawha City. He was insuring a lot of the cars we would sell. I got to know him real well and he kept telling me I should get into the insurance business and he finally talked me into it. That was in 1978, and I’ve been here ever since, right in this place 39 years ago. I started with Motors Mutual. Now it’s Progressive.

“I hired my grandson over there, and he’s learning the business. I wish I had the money I made selling insurance. I made a lot of money in the insurance business, but I let it get away.

“In the late 50s, I started bowling. I didn’t know nothing about bowling. My Hall of Fame bowling award was more through the administrative end. I was state president of the Kanawha Valley Bowling Association and held about every office in the bowling industry. Alex Schoenbaum told me I’d done more for bowling than anyone he ever knew. He owned the Boulevard Recreation Center and Venture Lanes.

“I’ve been involved in music all my life. I play guitar. My mother taught me to play. She played organ, guitar and banjo. She taught me three chords on the guitar and that was about it. I took it from there.

“I started the Kanawha Valley Jamboree in 2001 and we ran it for 12 years. It was in the Marmet Junior High building. I converted the gym into an auditorium. It was one of the better places to go spend a Saturday night.

“We brought acts in here from Nashville and all over the place. Dr. Ralph Stanley played here. It finally got to where we weren’t getting enough people to pay the bills, so we closed the place up.

“I had a band for a number of years. We played honky-tonks and bars all over this region. We were on WTIP radio for quite some time.

“I have a picture of us with the WTIP microphone and Sleepy Jeffers is in that picture. He was a good friend of mine. I was telling him about our Westvaco baseball team. He said he used to play baseball and wanted me to get him on the team. I did and he played right field. He was a pretty fair player.

“I’ve written 700 to 800 songs but never had any of them published. I’m a registered songwriter with BMI. I have some stuff that’s copyrighted but nobody’s picked them up.

“And here I ended up in the insurance business. Used to be, you didn’t have to have auto insurance. When they passed that law requiring insurance, I went around to all the car dealers. I knew all the salesmen. I told them I was selling insurance and they started sending people in here. I’d come to work at 8:30, and people would be lined up. Here comes this compulsory law and people are lined up at the door. I wish it was that way now. But we’re still above ground.

“I like what I do, and it’s not hard work unless you make it hard. My wife sat at that desk for all those years and she now has Alzheimer’s and had to retire. I hired Josie, my grandson, three years ago.

“I used to smoke, but I got away from that 40-some years ago. I was coughing my head off and trying to sell somebody a car. I had a pack of cigarettes in my shirt pocket and I dropped them in the trashcan and told myself, ‘I quit.’ People say you can’t quit cold turkey, but I did. I was smoking three packs a day.

“There are some things I wish I hadn’t done. I wasn’t the greatest husband in the world, l guess. I used to drink. I don’t drink anymore or do drugs or smoke. But I did all that back in the early days.

“Oh, and I raised five kids, three girls and two boys. They all went to Stonewall.

“In my younger days, my dream was to be a professional baseball player, but I got out of that idea. I don’t think I would change anything.”