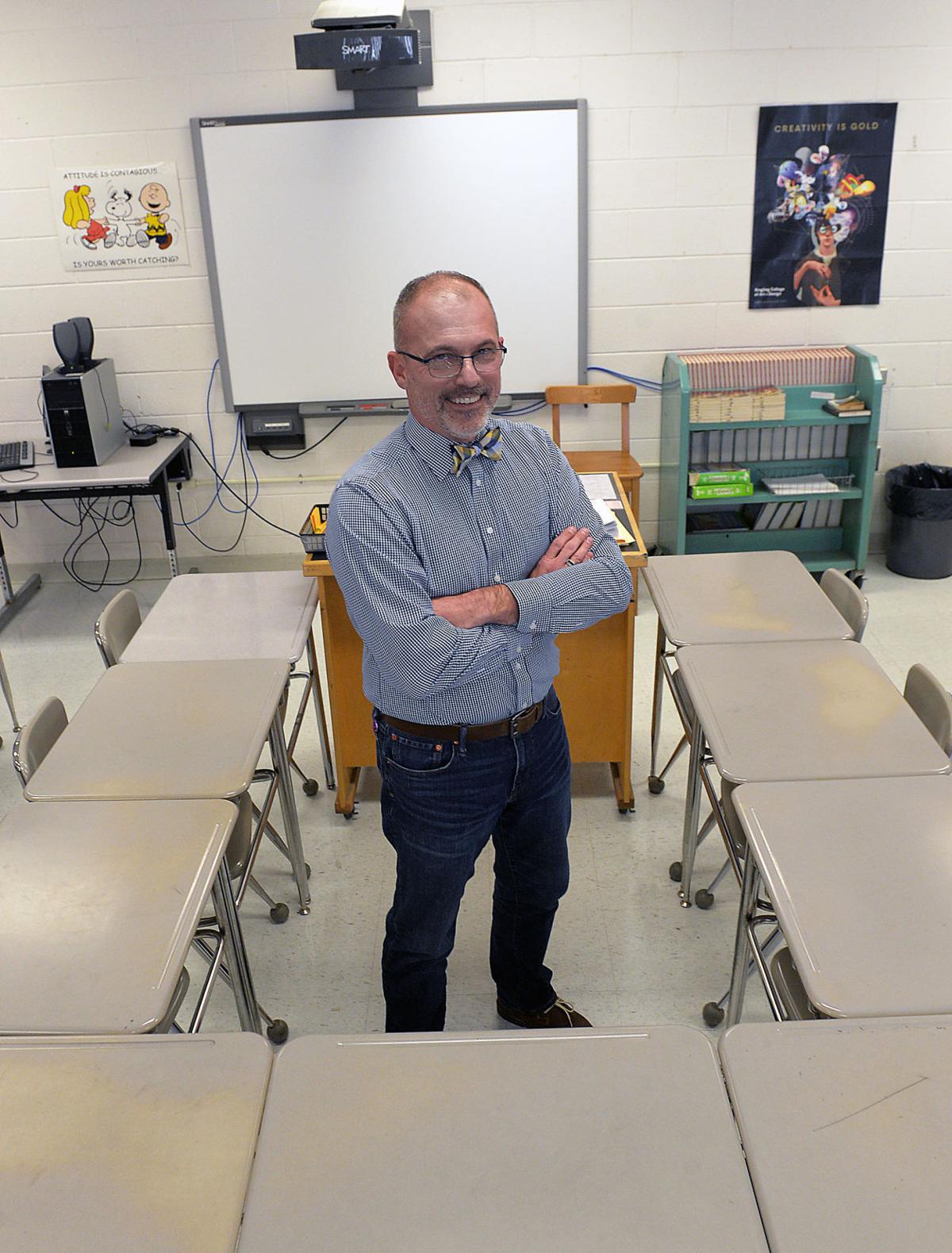 Openly gay English teacher Steve Shamblin feels comfortable and accepted in his classroom at Riverside High School. He landed at Riverside in 2013 after weathering a high-profile controversy over his inclusion of Pat Conroy books in his curriculum at Nitro High School. 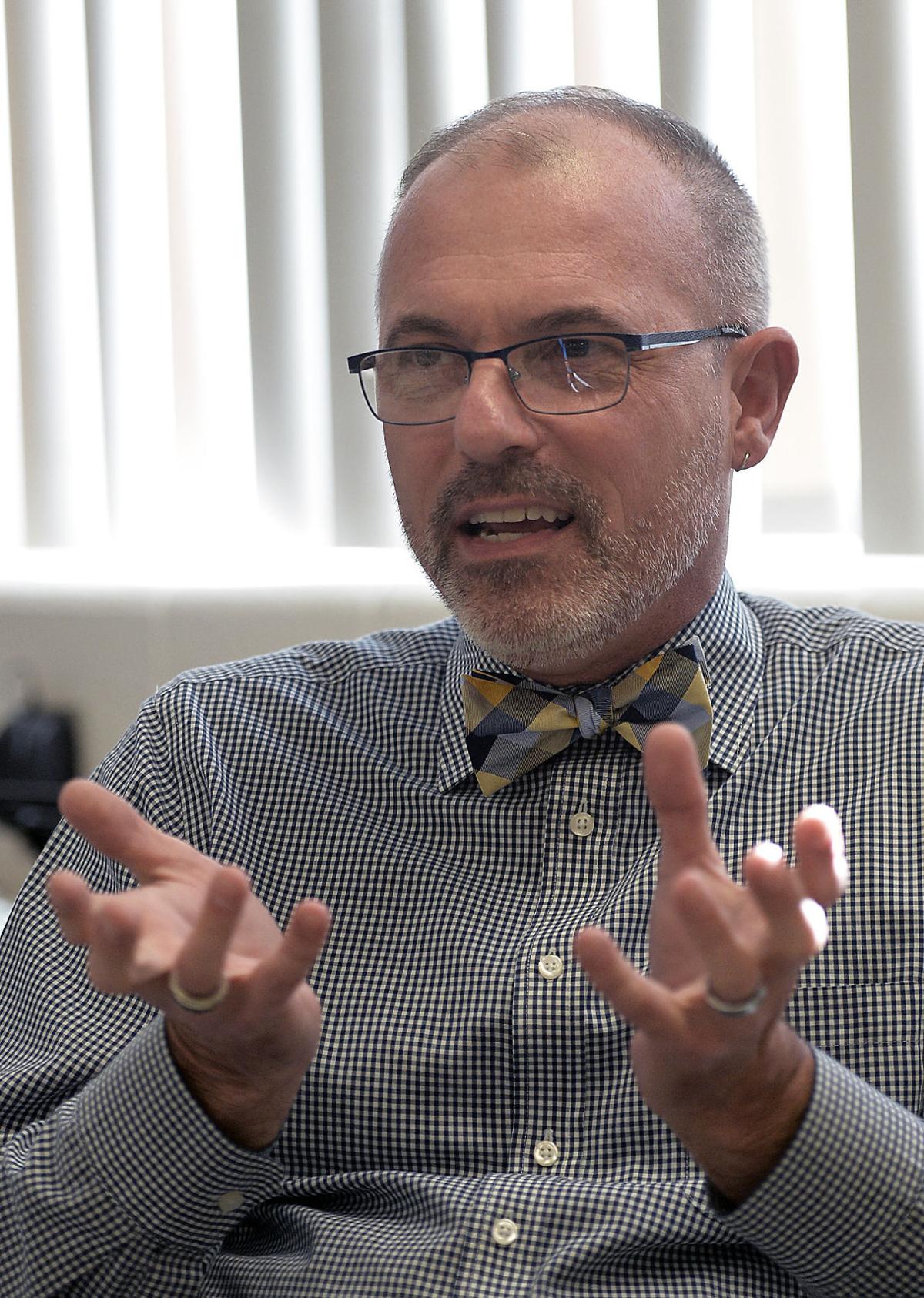 “Growing up in that fundamentalist frame of thinking, being gay was just misplaced lust, and that’s the way they preached about it.” 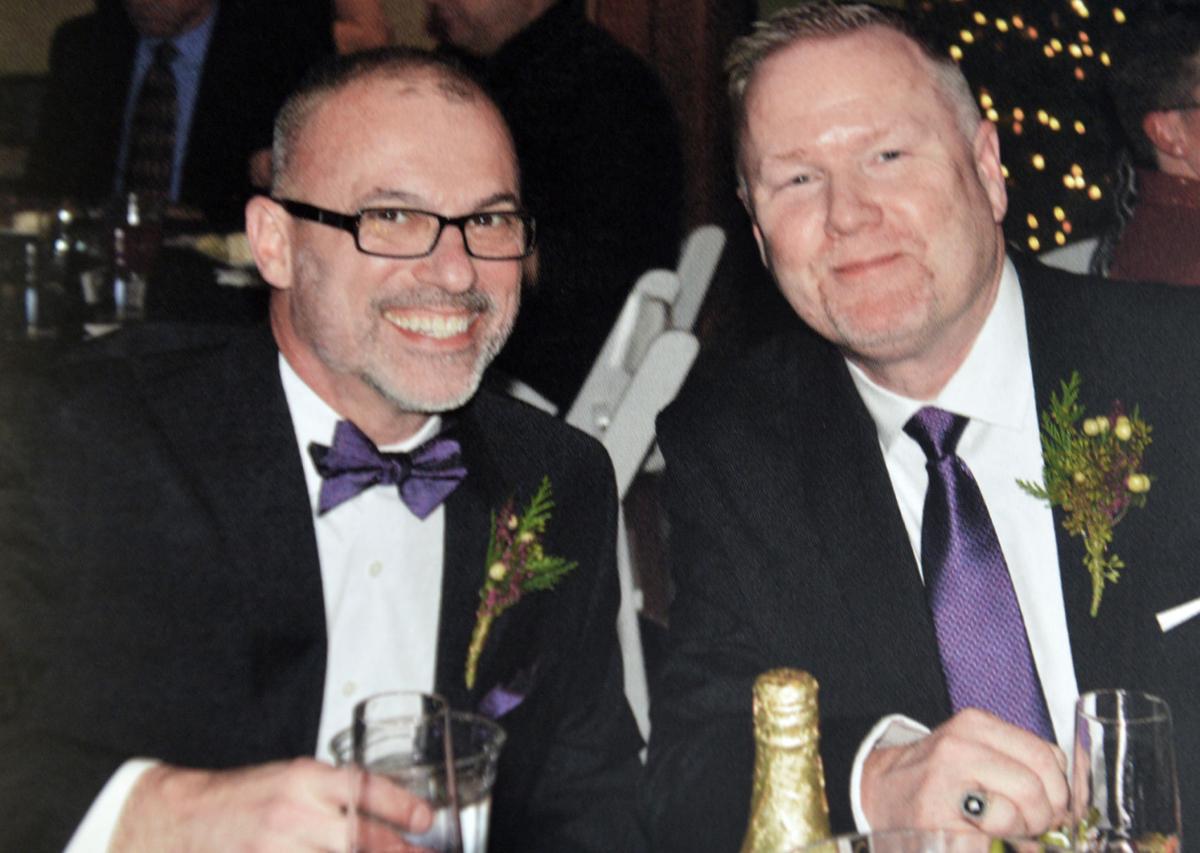 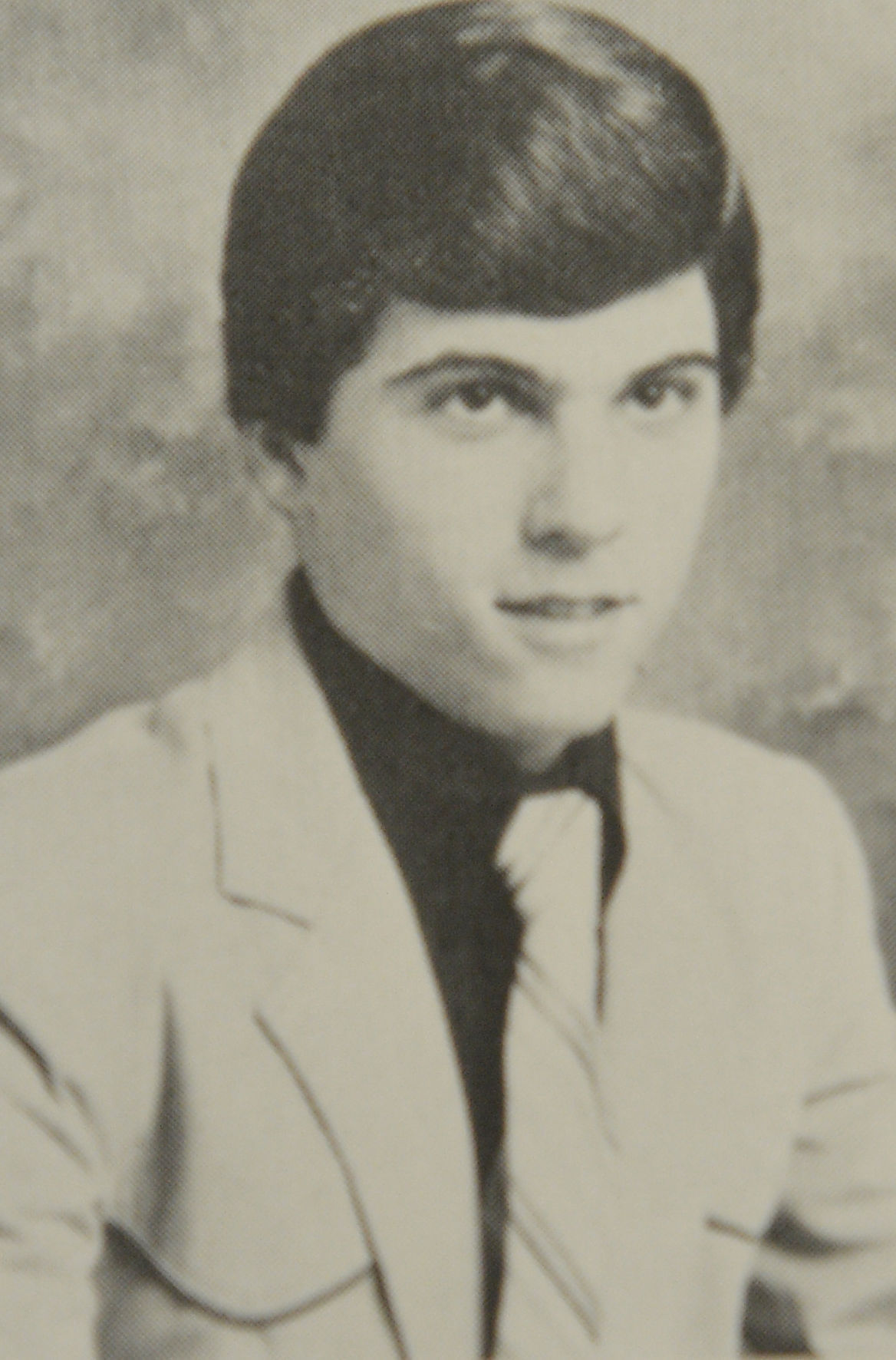 This class portrait depicts Shamblin as a senior at John Marshall High School. 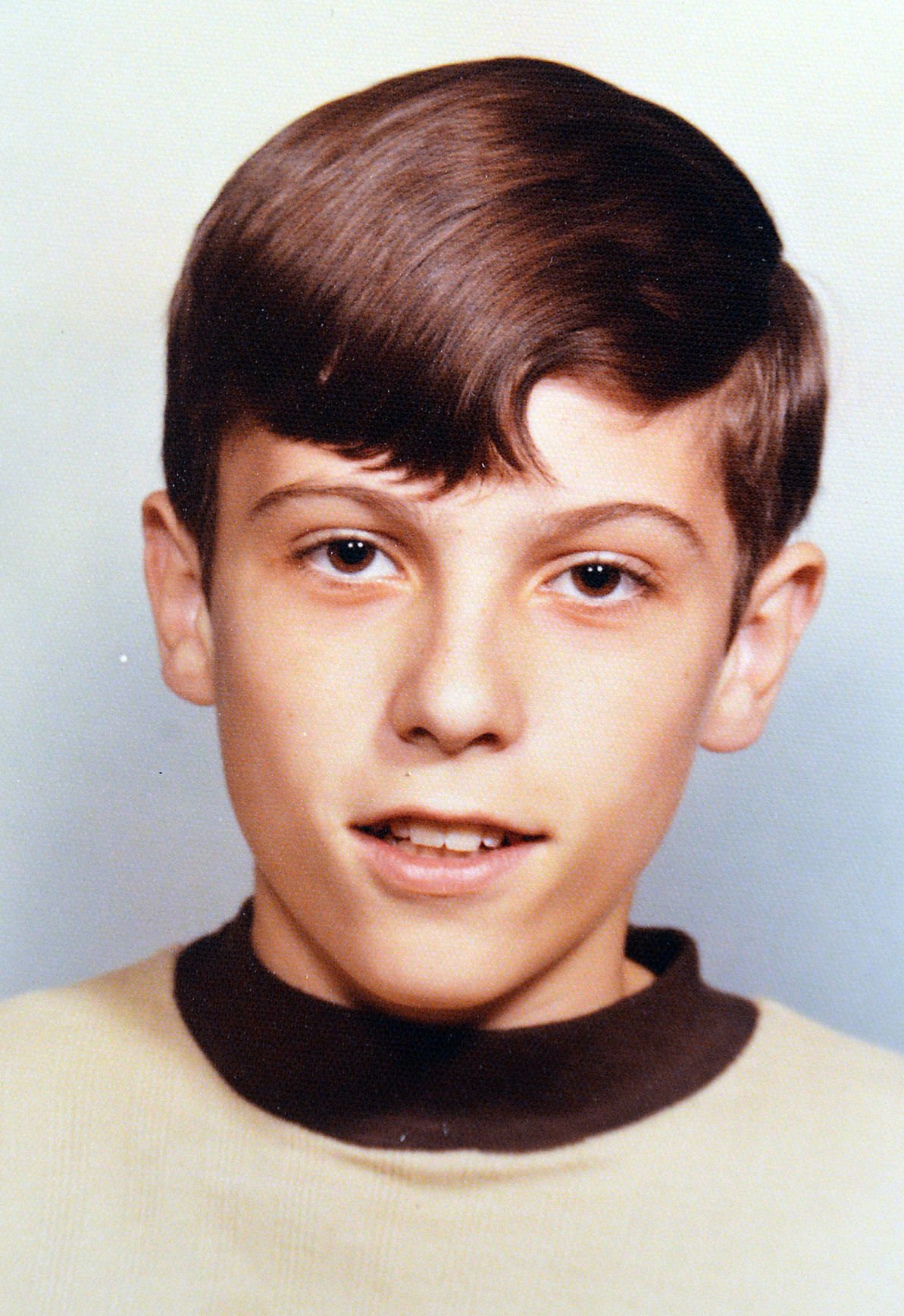 By the seventh grade, Shamblin had moved to Moundsville. His father, a state trooper, was transferred there. 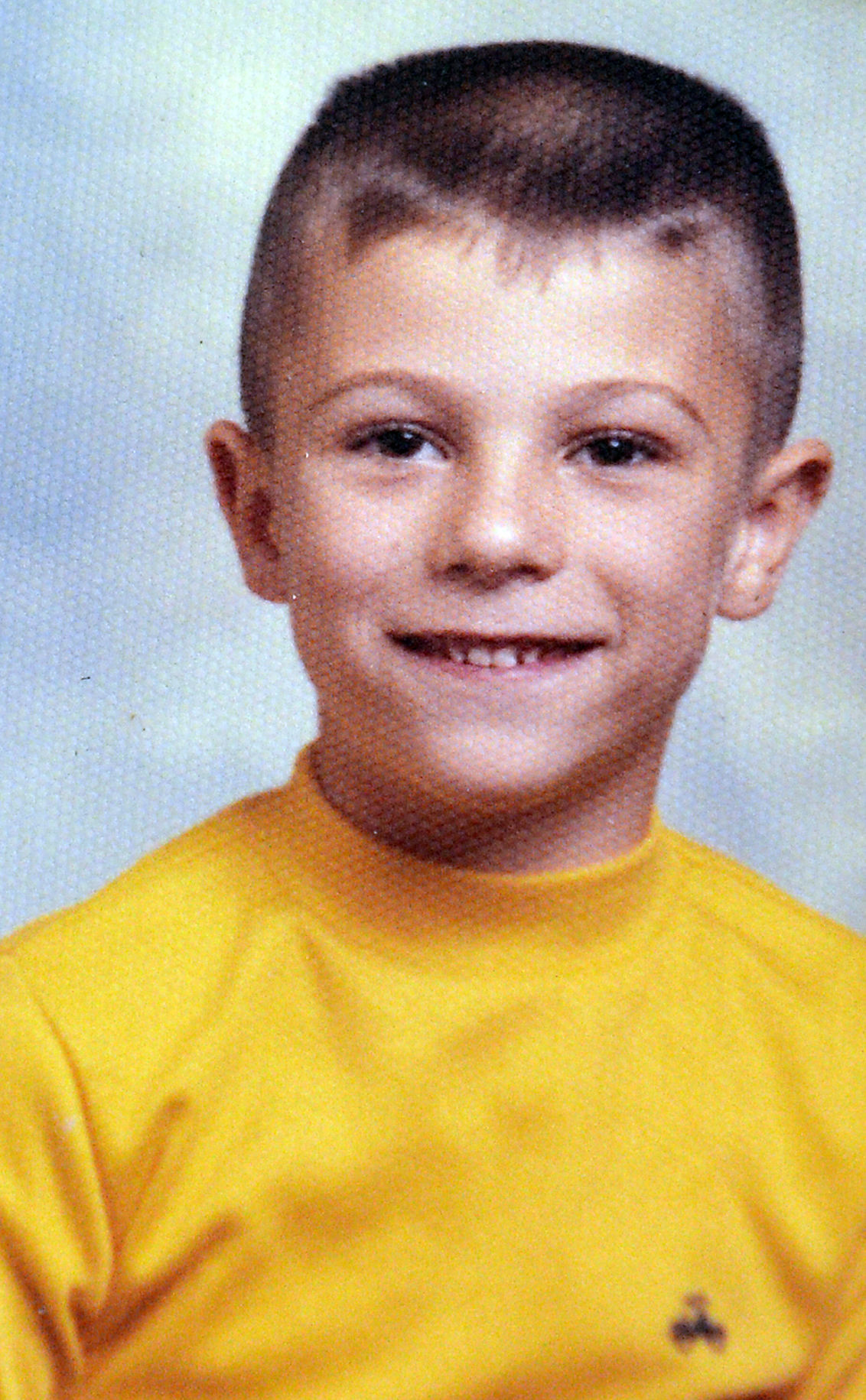 In first grade, Shamblin lived in Parsons, in Tucker County.

Openly gay English teacher Steve Shamblin feels comfortable and accepted in his classroom at Riverside High School. He landed at Riverside in 2013 after weathering a high-profile controversy over his inclusion of Pat Conroy books in his curriculum at Nitro High School.

“Growing up in that fundamentalist frame of thinking, being gay was just misplaced lust, and that’s the way they preached about it.”

This class portrait depicts Shamblin as a senior at John Marshall High School.

By the seventh grade, Shamblin had moved to Moundsville. His father, a state trooper, was transferred there.

In first grade, Shamblin lived in Parsons, in Tucker County.

He’s the son of a state trooper. He was reared in a fundamentalist church. He graduated from a fundamentalist school, Bob Jones University, and worked there for 14 years as business manager.

He married, had three children and landed back in West Virginia, where he taught art and English.

At Nitro High School, he made headlines when some parents wanted to ban Pat Conroy books from his classroom. He won that war.

Surely enough material for a column right there.

But there’s another whole side to Steve Shamblin’s story, an overriding thread that defines him.

When he came out in 1999, Bob Jones University fired him and threatened to arrest him if he ever showed up on campus. His wife divorced him. The school alumni association dropped him. The church kicked him out.

Today, at 54, he’s a popular English teacher at Riverside High. In December, he married his partner, Jeff Mullinix. Finally, he’s happily living the life that societal standards denied him for so long.

He talks openly about that struggle, the hard-got journey that brought him to this honest place.

“I was born in Martinsburg. When I was 3, my dad was transferred to Tucker County with the West Virginia State Police.

“In Parsons, in the first grade, I had a crush on a little boy across the street. I liked being around boys. I thought they were cute.

“The bad thing about him being a trooper was that everybody knew us. Back in those days, you had one or two troopers in those small counties. Later, my teachers would say, ‘Oh, you were the State Police kid, weren’t you?’

“We started going to the Baptist Church in Parsons. My mom was very involved as a Sunday school teacher and deaconess. We never missed a service. In junior high, we went to Sunday school. That afternoon was youth group. Sunday night was church. Wednesday night was prayer meeting. Mother did the bulletins. On Friday night, we were there folding bulletins, and once a month, we cleaned the church.

“I’d always thought about architecture. I liked math and art. On many of my achievement tests, the profile, it says teacher as a suggested profession.

“When I got to high school, I decided I would go the math route for undergrad. I actually turned down a scholarship for my freshman year at WVU to go to Bob Jones University, of all places.

“After one semester there, I fell I love with the art department and changed my major to art. I was thinking at that time about going into the ministry.

“I didn’t date until I got to Bob Jones. The first girl I dated there ended up being my wife. She was a senior in high school and we dated all through college. We were best friends.

“Growing up in that fundamentalist frame of thinking, being gay was just misplaced lust and that’s the way they preached about it. ‘If you get married and have a heterosexual relationship, it will take care of it.’ I tried that. We got married in ’86.

“After I graduated, I was business manager at Bob Jones for 14 years. It was constantly, ‘Pray, pray, pray, pray the gay away.’ I knew I was gay by then.

“It was ’85 when I graduated. Bob Jones preached that all gays should be stoned and that would take care of this gay thing.

“If they found out you were gay, you were immediately expelled. So that was another reason to fly under the radar. I was the best actor in the world.

“In ’99, when I came out, I got fired. I came out to my wife. I was just tired of pretending. Her whole mindset was that I needed to go to the administration and tell them. I knew that would mean either counseling or getting fired. I told her I had to figure out what our future was going to be. That was February. By August, we had separated.

“After a year, we got divorced. We had three kids, 10, 7 and 4. That was the hardest part of the whole thing. It wasn’t a simple divorce.

“My kids asked me questions and I was as honest as I could be depending on their age. I was close to them until the wedding. I married Jeff in December.

“I assumed my kids would come around. I heard from my cousin that my ex-wife started blackmail stuff. ‘If you go to your dad’s wedding, don’t bother coming back here.’

“She remarried within two years.

“The school said I couldn’t work there. Once I left, they sent a letter saying that if I ever came back on campus, I would be arrested.

“I was a lifetime member of the alumni association. They said they were dropping me because of my lifestyle. My church sent a similar letter.

“That brought me back to West Virginia. My grandmother was here in Clendenin and my mom’s brothers and sisters were in Charleston. So my support group was here. In South Carolina, no one would talk to me.

“I didn’t talk to my mom for a year and a half after I came out. She was the PR secretary for Bob Jones. She would go to all the divorce hearings with my wife.

“My dad told me he had already figured out I was gay. He was way more supportive than my mom. A lot of that came from my stepmom. She told him, ‘He is your kid no matter what.’ She got him through that.

“I went back to West Virginia State. I was eight classes shy of my doctorate at Bob Jones, but they aren’t accredited. My goal was to be Dr. Shamblin by the time I was 40, and I was on track. I had the first three chapters of my dissertation written.

“Larry Lohan at GW called me. Their art teacher had breast cancer. Larry said they would get me on there. But the Board of Education wouldn’t even give me a substitute teaching permit.

“The union, the AFT, heard I was struggling so they met with their connections at State and State accepted my credits and I did another bachelor’s degree in education and got my teaching certificate in May of 2002.

“I started teaching art at South Charleston Middle School. The levy didn’t pass and elementary art teachers were funded out of that. I was the last one hired and the first let go.

“Paul McClanahan needed a part-time art teacher and part-time English teacher at South Charleston. I had to go back to school for a few hours to get my English certification. He wrote the job for English and art.

“Judy Gillan, who used to be the English coordinator for the county, said Nitro was looking for an English position, the advanced placement teacher.

“My last year at Nitro, one or two parents didn’t want the Pat Conroy books. ‘Prince of Tides’ has a rape scene. I always told my students they could skip certain pages and wouldn’t be tested on it. Or I would give them an alternative read.

“But they didn’t think any kid at Nitro should be reading Conroy. I had 39 other kids whose parents were OK with it.

“They took the book to the board in September of 2007 and started reading excerpts, the rape scene. They focused on that out of context. The board pulled the book until they could read it with parents and teachers and decide if it should be in the classroom.

“The kids were staging a protest that day. They had made T-shirts that said, that’s a motif Conroy uses throughout the book: ‘Man Wonders But God Decides When to Kill the Prince of Tides.’

“The ACLU was there and thought it was great. The GW kids had been reading those books for years. They called my kids and said they would form a Students Against Censorship and help them fight this battle.

“One of the GW students actually wrote Pat Conroy. He wrote a letter that made it to the Gazette and it is published in the back of his book ‘Beach Music.’ It mentions me by name.

“The book review committee and said the books were fine as long as an alternative is given.

“The Nitro student who headed the protest was selected as one of ACLU’s 14 freedom fighters for the whole United States.

“After the book controversy, Nitro had lost its flair. GW had an opening and I was there for five years. I came to Riverside in the fall of 2013. It was an art job. They weren’t going to let me teach AP at GW.

“They were looking for a full-time art teacher here. The next year, I taught English, then half art and half English for two years. This year I’m back to just English.

“I married Jeff [Mullinix] in December.

“At Bob Jones, you are told you are an anomaly and they try to isolate you. Then I discovered a Bob Jones survivor group on Facebook, a private group of six, all Bob Jones grads, all gay. I thought I had found a long-lost family because nobody understood when I moved here about the Bob Jones history and the fundamentalist BS I had lived under. This group got it. We reached out to other gay Bob Jones grads and built that group to 100.

“We incorporated in New York State and marched in the New York Pride parade with a Bob Jones unit showing support for LGBT students, families and former students.

“I’m still very active in that. Every year we pick a Pride festival to go to. In 2015, we picked Columbus. Jeff had gone to Bob Jones and came over and talked to us. And that’s how we met and started dating long-distance.

“Life is very good. I don’t have any regrets. I don’t think I would be the person I am today without the Bob Jones component. I would never have met Jeff.

“Not coming out after high school kept me out of the AIDS crisis of the ’80s. I had some college friends who died because of AIDS.

“I’m very open about it on Facebook. When I first started teaching here, you could still be fired. A few years ago, they added that they couldn’t discriminate because of sexual orientation.

“I started the Gay-Straight Alliance at GW and I sponsor it here. I’m an activist on many fronts.”