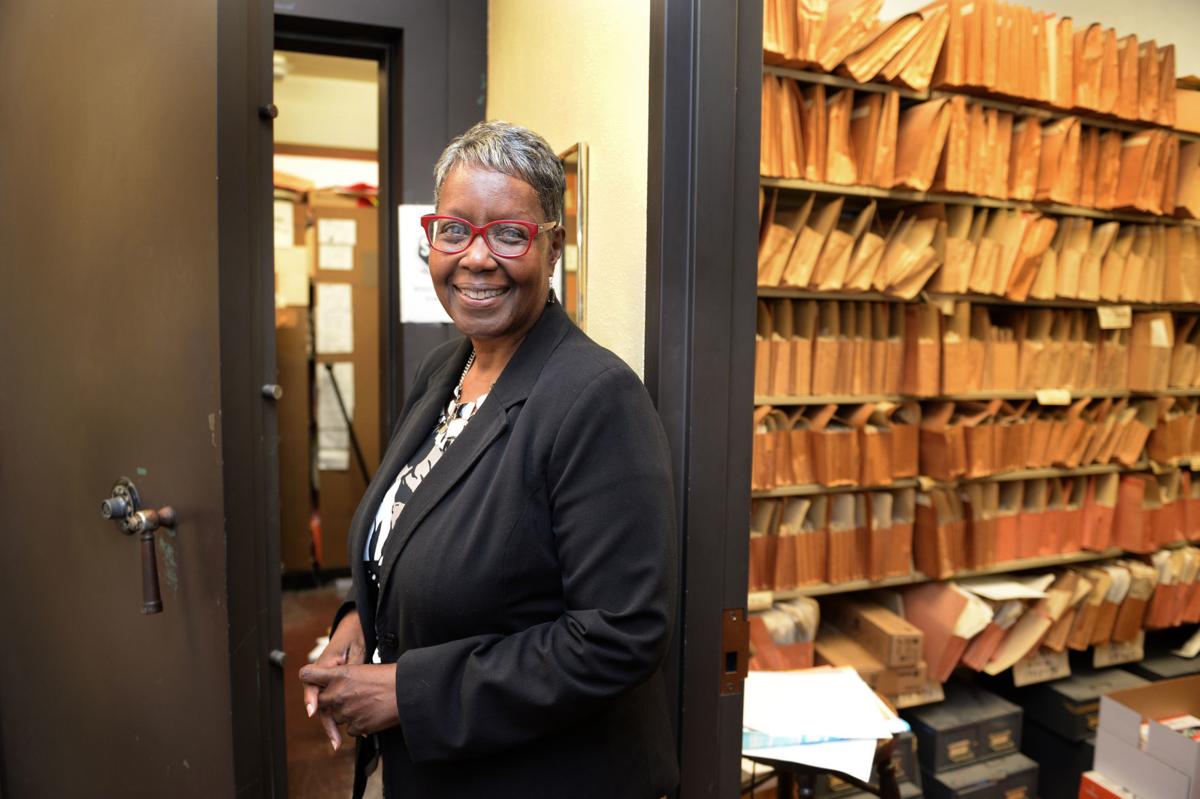 In a vault at West Virginia State University crammed with student records, newly retired registrar Donna Hunter recalls her habit of fiddling with cabinet locks and jamming them as she chatted with colleagues. Maintenance workers had to pull the locks out. Now many are covered with preventive duct tape, a reminder of her 43-year tenure there. 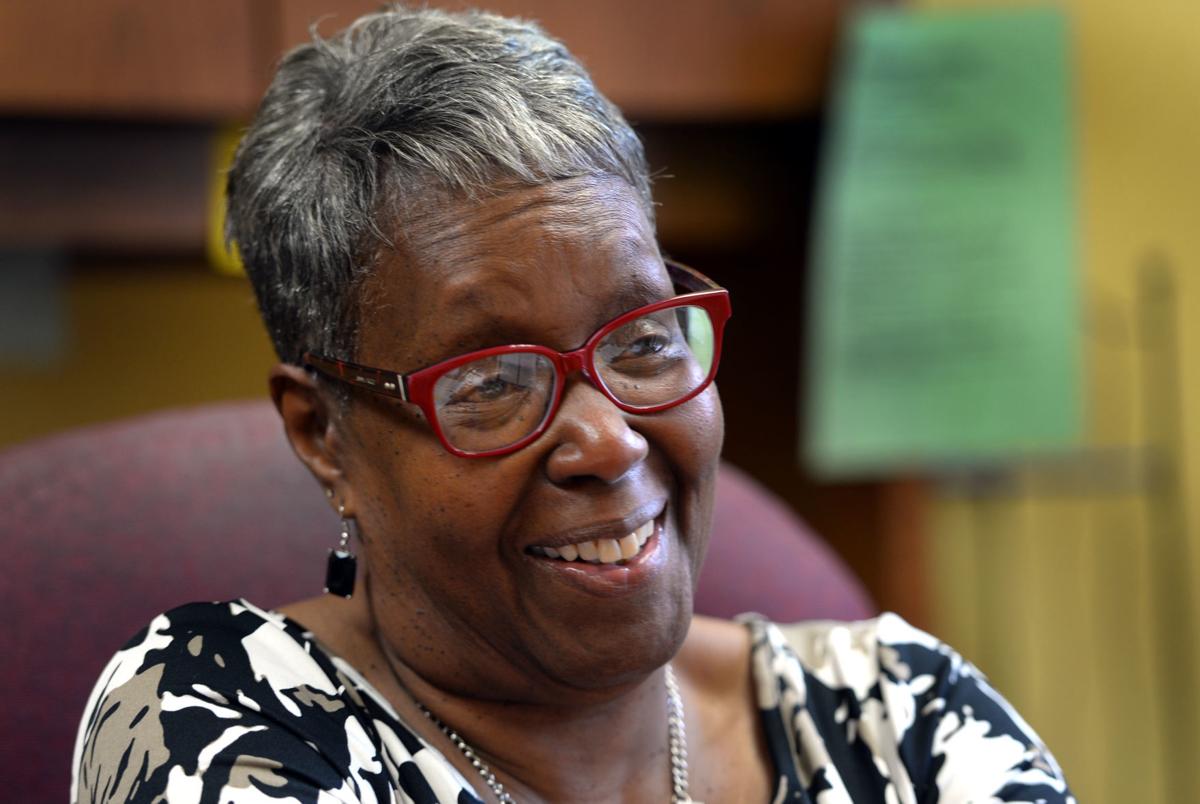 “When I was in school, we would just get a boom box and set it up somewhere and dance and sit and talk and have the best time. I don’t see kids do that anymore.” 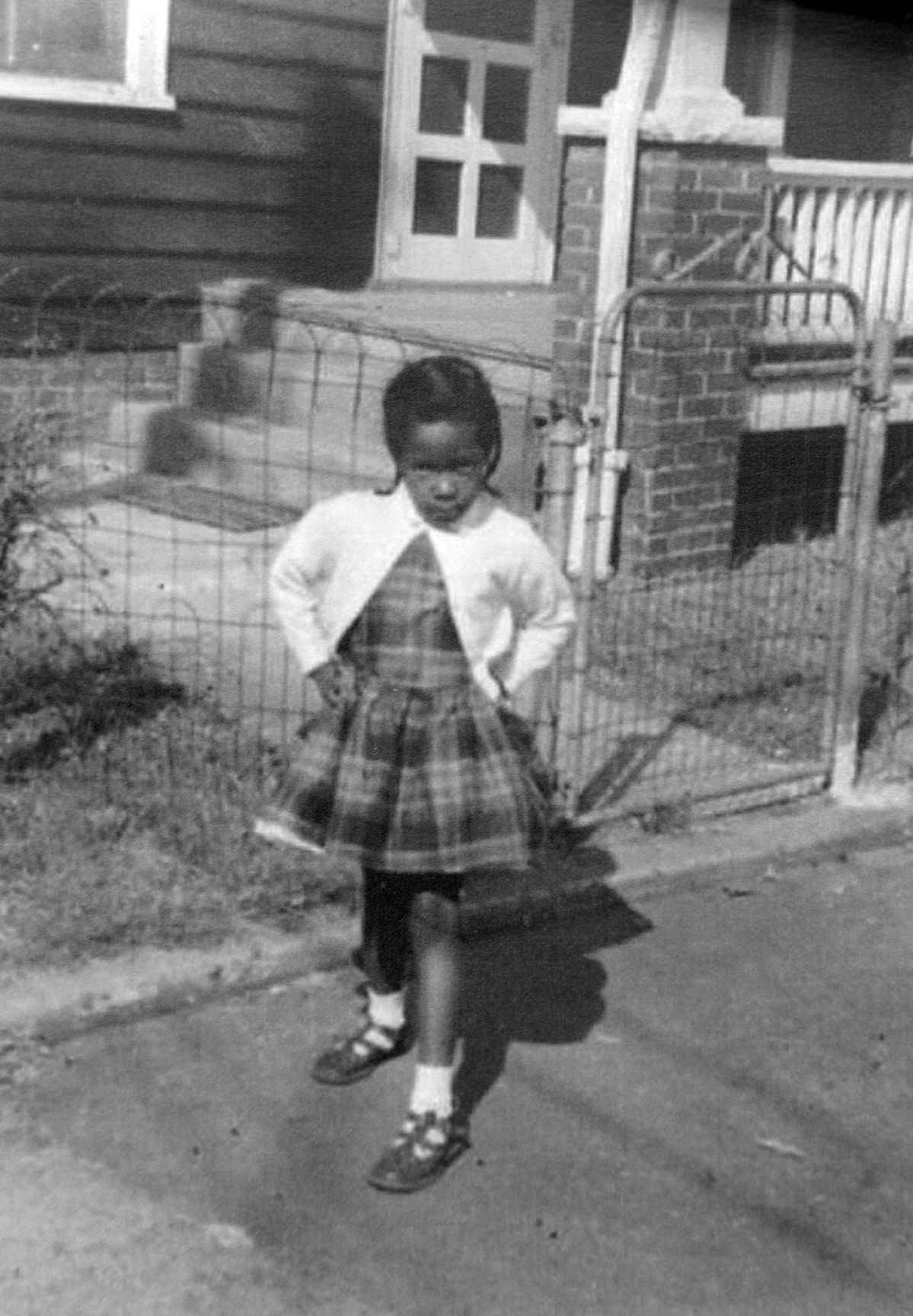 As a young girl, Donna Hunter loved life in her East End neighborhood on Milton Street. 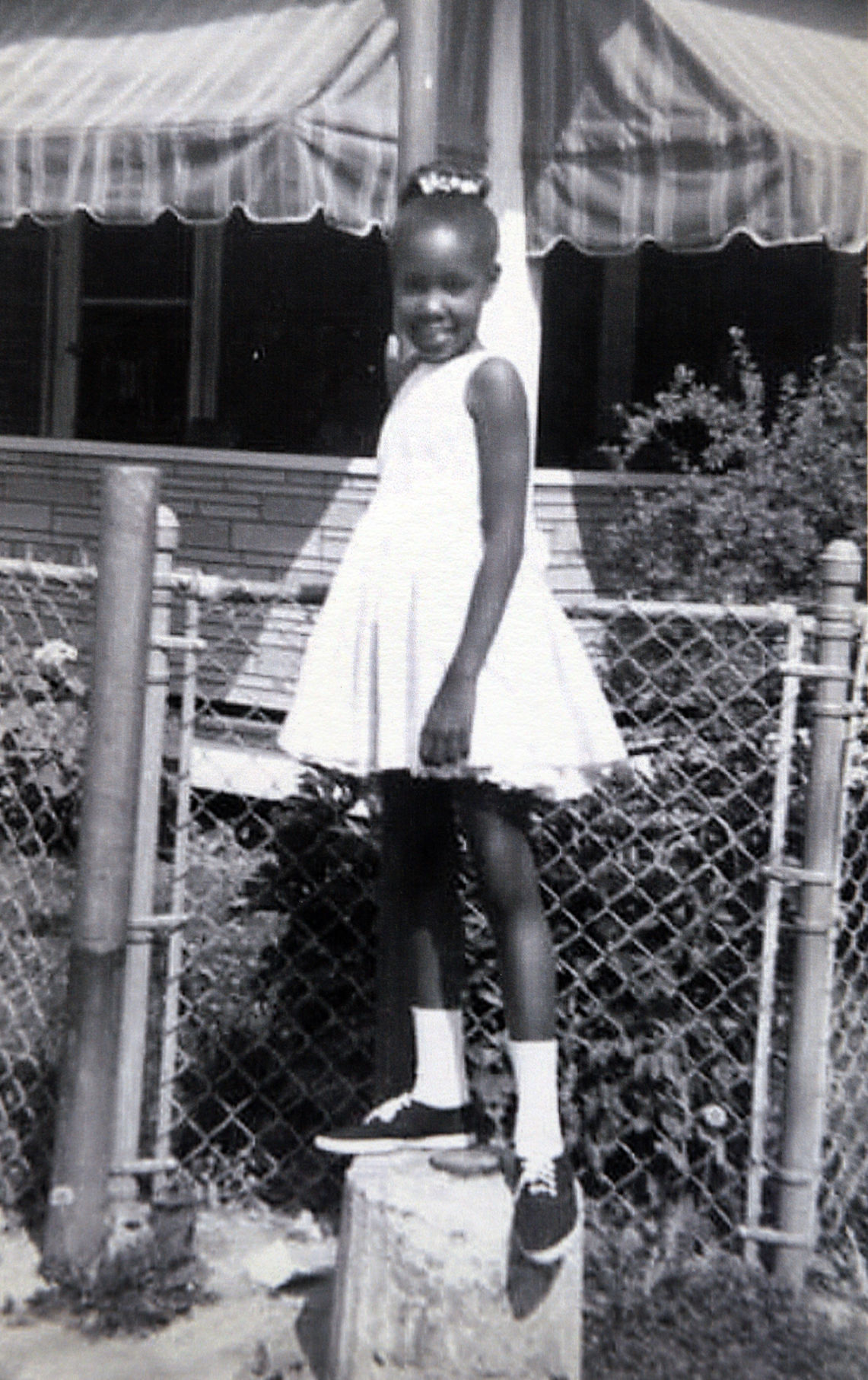 This snapshot captures Donna Hunter as a young girl in the white dress she chose for Easter. 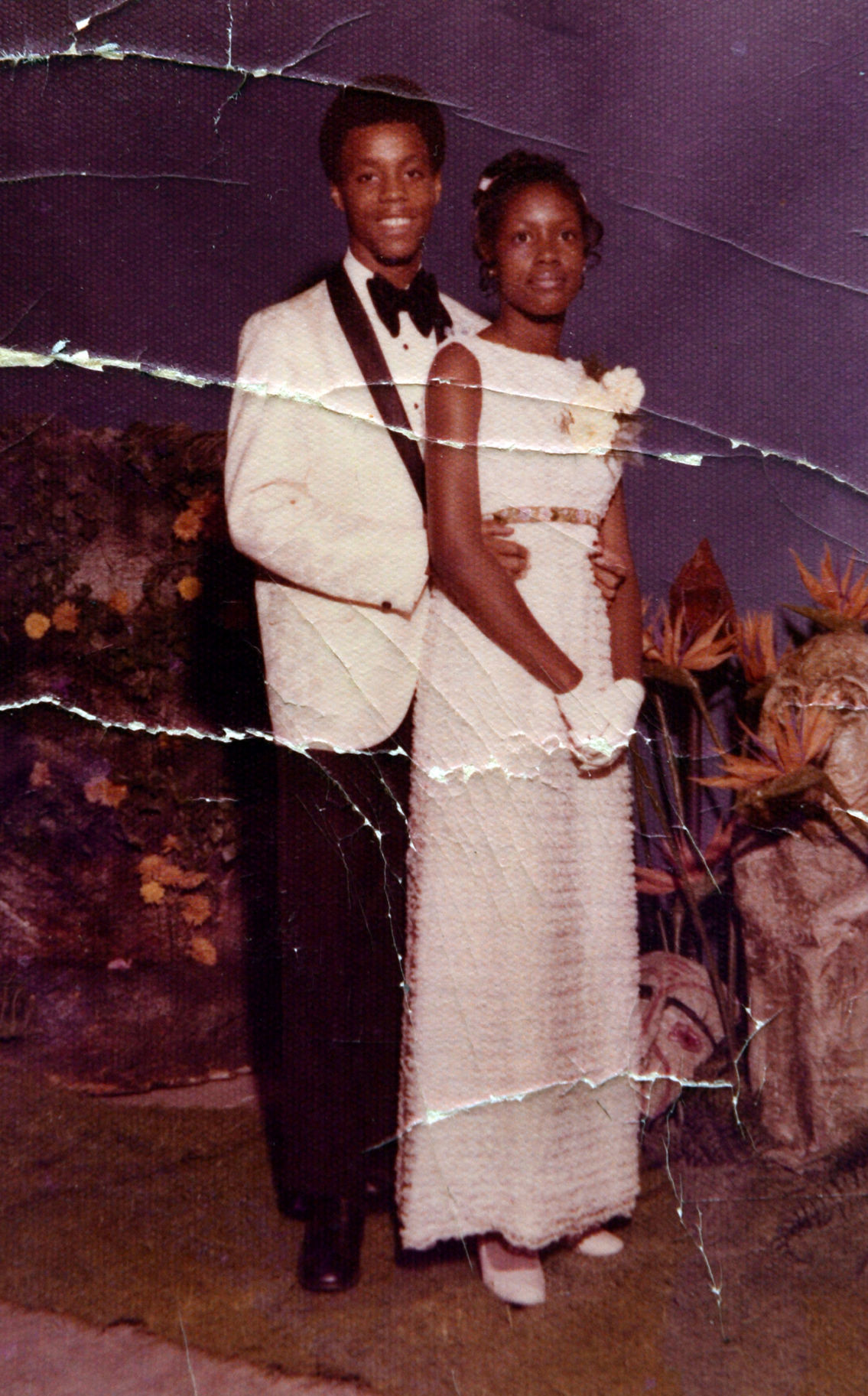 In 1970, Donna Hunter and Hewlit Hall attended the prom at Charleston High School.

In a vault at West Virginia State University crammed with student records, newly retired registrar Donna Hunter recalls her habit of fiddling with cabinet locks and jamming them as she chatted with colleagues. Maintenance workers had to pull the locks out. Now many are covered with preventive duct tape, a reminder of her 43-year tenure there.

“When I was in school, we would just get a boom box and set it up somewhere and dance and sit and talk and have the best time. I don’t see kids do that anymore.”

As a young girl, Donna Hunter loved life in her East End neighborhood on Milton Street.

This snapshot captures Donna Hunter as a young girl in the white dress she chose for Easter.

In 1970, Donna Hunter and Hewlit Hall attended the prom at Charleston High School.

Something’s missing on the campus at West Virginia State University — a familiar face, an institution at the institution.

Growing up, she didn’t know what the word “registrar” meant. A fast learner, she ended up spending her working life overseeing the often-complex process of registering students at her alma mater.

Starting as a student employee, a clerk in the registrar’s office, she rose through the department ranks, filling every position but one on her way to the top.

She talks tearfully about leaving beloved colleagues and the campus that feels like a second home.

She saw plenty of change, remembers a busier, bustling, self-contained campus, an era before computers streamlined her work, when registration lines snaked down the halls and up two floors. Employees chose special outfits to help them cope with the chaos.

Eventually, she welcomed the computer age, but down deep, she harbors an affinity for paper and pen.

She’s a jovial sort, quick to laugh, open and outgoing. At 64, preparing curiously for whatever comes next, she looks back with pride on the accomplishments of that little girl who grew up near Laidley Field.

“I grew up in the East End of Charleston on Milton Street, not far from Laidley Field. We played up in that area. We had to be home when the street lights came on. You could go back out, but you had to check in.

“I grew up with the Dorcuses up on Hansford Street and with Mike Tyson, who played for Charleston High. Those guys would play sandlot football, and we were the cheerleaders on the side. We would cross Piedmont and go up to the park where the apartments are. When they were putting in the interstate, we would go up there and play.

“I snuck into Laidley Field one time and got caught on the fence and injured my foot. What was really exciting for me was the Majorette Festival. I couldn’t wait to get home and eat dinner and get ready to go watch the bands line up to go on the field.

“I didn’t even know what a registrar was. I wasn’t even thinking about college. I went to Roosevelt Junior High. I graduated from Charleston High in 1971.

“I used to sneak down here to State. My mother was the type that you didn’t do things before it was time. I didn’t go to college functions when I was in high school, but I snuck down here one afternoon. There wasn’t a soul out, so it was a wasted trip.

“My mother wanted me to go to Central State in Ohio, but then she thought about me being an only child and so close to her and decided that might not be a good idea. So we looked at State. All my friends were going somewhere else. But right before school started, they started calling about what to do to get into State, so we all ended up here. So I went all through school with the same friends.

“My childhood friend from second grade came to my retirement celebration from North Carolina.

“I majored in education at first. I was going to be a teacher. I switched to sociology, but I got hung up with a statistics class. I enrolled in it twice. I’ve never been a math person. On the third attempt, they switched me to a four-year nontraditional regents bachelor of arts degree. It’s for students who have work experience who can use that toward college credit.

“I wouldn’t have been able to do that without the help of Nellie Walker, the associate registrar, taking time with me. When I started here, I was a student worker and my first job was in the library. None of the buildings had air. The library was probably the hottest building on campus. They would send you to the stacks to file books the students had pulled out that day. I’d go up there on two or three floors and file books in that heat.

“I started talking to Ms. Walker, and she said to come over to registration and work with them. My second semester of my freshman year, I started working here in the registrar’s office as a student employee. So my association has actually been longer than 43 years.

“The campus is very different. As you can see, there aren’t many people milling around. There was a time when the campus was busy. Our population is down. A lot of that is a result of the legislative split of four-year and two-year institutions. When it was approved, we lost almost half of our students.

“When I was in school, we would just get a boom box and set it up somewhere and dance and sit and talk and have the best time. I don’t see kids do that anymore. We didn’t think about going to Huntington or Charleston. We stayed right here on campus and partied in our rooms or at some college function.

“I see a difference in how we treat each other now. I don’t want to go too far into that. When I was a new employee, it was more of a family atmosphere. Ladies worked in financial aid and payroll and they were aunts and mother figures who guided you.

“I started as a clerk. I’ve held every position in this office but one. There were four clerks in the front office. Someone in GPAs, someone in transcripts, one in re-admission. I forget the fourth one. Anyway, I did three of those. My first promotion was to administrative secretary to the registrar. Then I was appointed associate registrar. When Dr. [John] Fuller, the registrar before me, retired in 2008, I was put into this position. I was acting registrar for about three years. That really gave me a chance to learn this position.

“When I first started here and Ms. Walker was the associate registrar, we would go out to lunch and people would say, ‘Hello, Miss Walker,’ ‘Hi, Miss Walker’, and I used to say, ‘How do you know all these people?’ And she’d say, ‘Oh, I know them from State.’ I thought, I’m going to stay somewhere long enough that people will know me on sight. And they do, but I still haven’t reached the point where she was.

“At the beginning of school, we would get overwhelmed. It’s not so bad now because we have colleges. A lot of students do registration either themselves or through the college. Before, we would have lines for registration that would go down the hall and to the second and third floor.

“It was fun but stressful. We used to joke and have a registration outfit, something special to wear. Graduation was busy, too. We are probably one of the few schools in the state with live graduations where the student has completed all their requirements before we give them their diploma.

“We would stay here until 11 or 12 at night checking grades, then go to the print shop with the final list and then come back on Saturday — graduation was Sunday — and stuff the diplomas, putting them in the case and lining them up.

“I remember when we started on Banner, our student computer system. For someone my age, I fought as much as I could. It’s a slow system and still has quirks. Now I wouldn’t trade it for the world.

“I still have that old-day mentality where nothing beats a pen and a pencil. I pick up a pen or a pencil and I do what I need to do and get it done. And that’s what I’m used to.

“I’ve thought about working on another master’s. I received my master’s from Marshall in higher ed leadership studies. I took one class toward a doctoral — writing for publication — and I thought no way, so I stopped.

“When I first started, I was in counseling. Marshall’s courses were taught here. I felt so out of place in the classes because everyone else was already working in the field. So I took three or four classes and decided that wasn’t for me.

“Dr. Fuller was working on his master’s and doctorate in higher education leadership studies. With his mentorship, I decided on higher ed leadership. I took one class through Marshall and I had dry heaves. Another mentor, Dr. Charles Byers, said to stop worrying. He said to just enjoy the class. I took that class and one more then started taking two at a time. I made one B in a class and went crazy mad. You do A’s.

“There’s so much new blood here now and things are different, so I felt like it was time to step aside. I’ve been told to take it easy. A friend at church said when she retired, she didn’t do anything but lay on her couch for two or three months.

“I hope to travel. I went to visit a student who is in the Navy. I hope to get back out there again. I like traveling.

“And I’m active in the First Baptist Church on Shrewsbury Street. I’m on the deacon ministry there. We have a ladies ministry I’m hoping to rebuild there.

“I’m really interested in body language. I like to sit and watch people. My mother and I would go to the park and sit and just watch. I’ve been looking at some courses because I would really like to learn to read people.

“I never thought I’d stay somewhere 43 years, but I wouldn’t trade it. Don’t take my picture now. I’m crying. I wouldn’t change my experience here. I love this institution. I’ve been here six days since I retired.

“I’m happy the way things have turned out and what I’ve accomplished.”