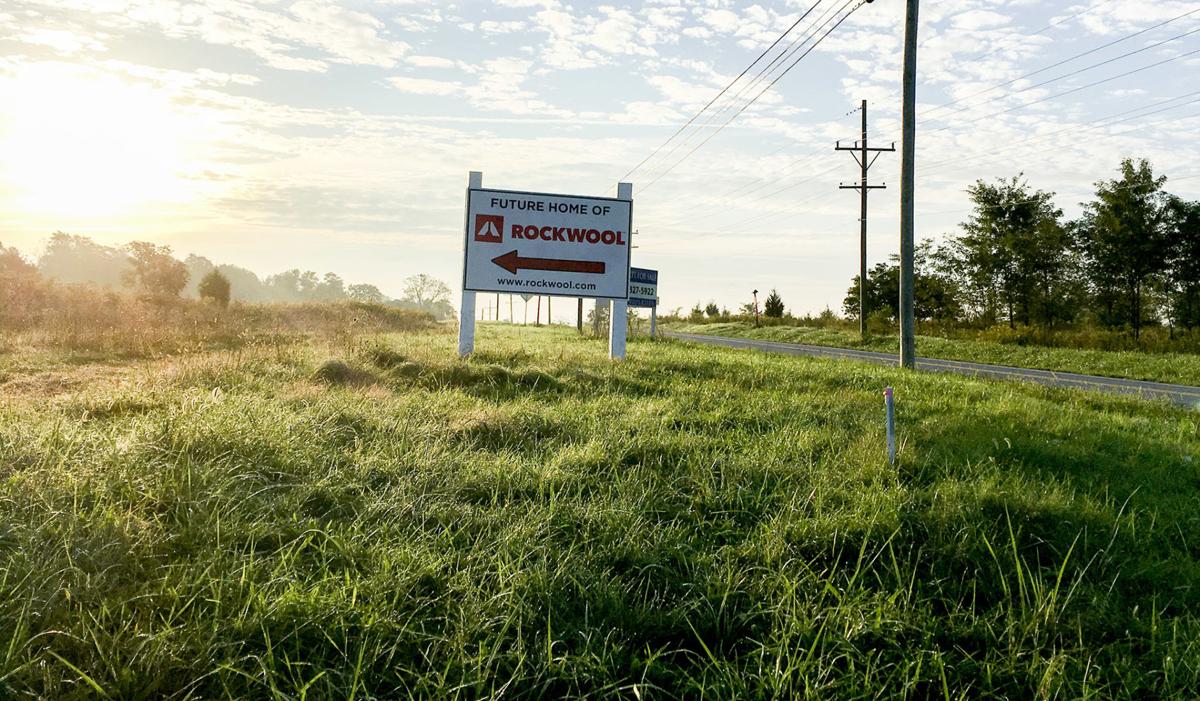 A sign for the Rockwool manufacturing plant stands outside the site in Ranson. Company officials say the plant will be in service in 2020. 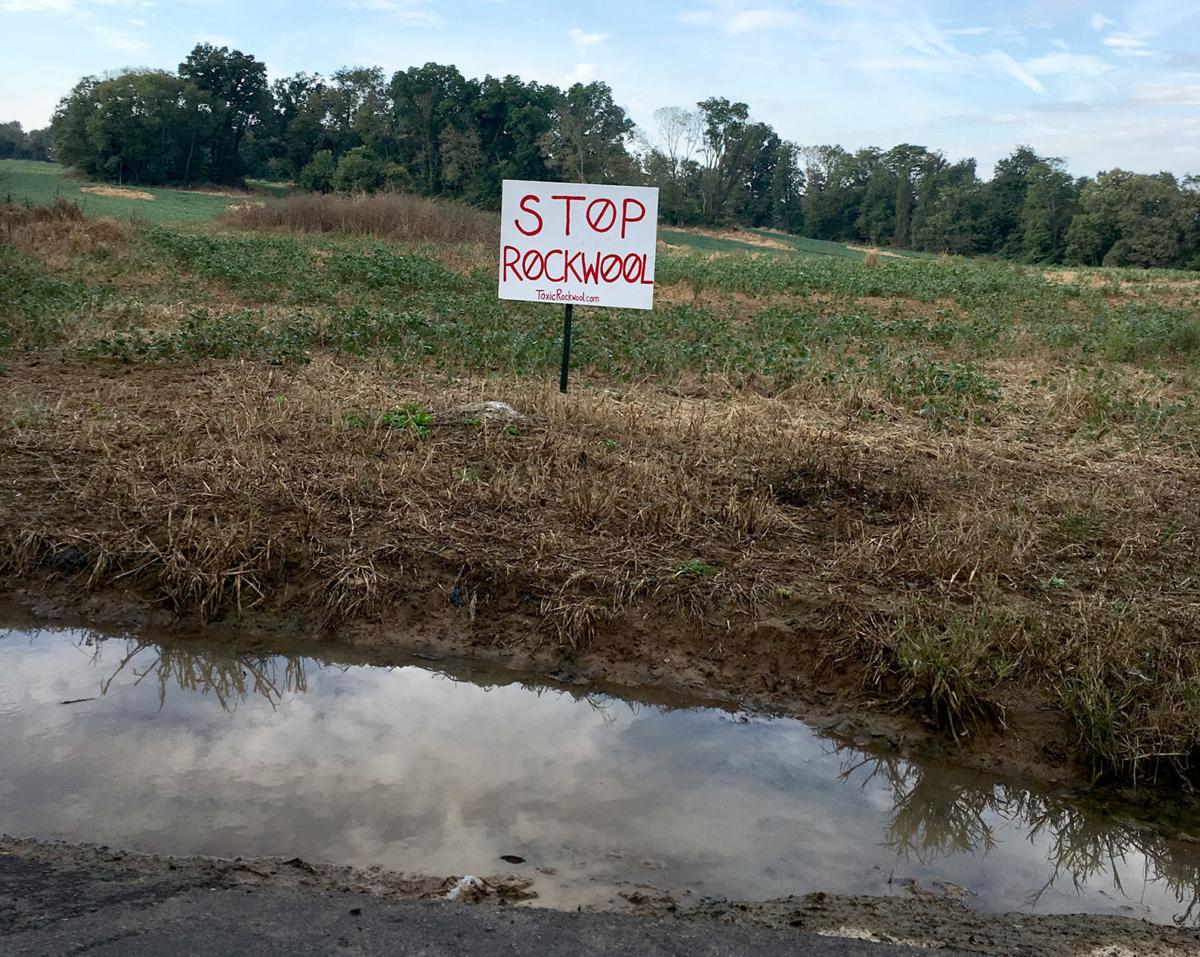 A sign protesting the Rockwool manufacturing plant stands in Jefferson County on Tuesday, Oct. 2. There are several anti-Rockwool signs spread across the county. 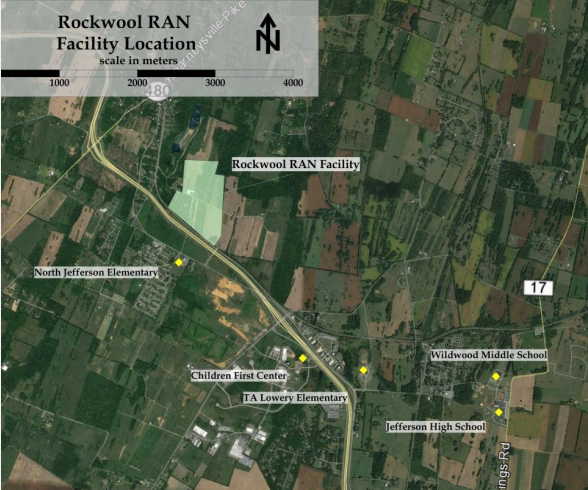 A sign for the Rockwool manufacturing plant stands outside the site in Ranson. Company officials say the plant will be in service in 2020.

A sign protesting the Rockwool manufacturing plant stands in Jefferson County on Tuesday, Oct. 2. There are several anti-Rockwool signs spread across the county.

RANSON -- As it winds through Jefferson County, W.Va. 9 cuts through sprawling fields with long grass, past acres of soybeans, corn and apple trees. Nestled along the road in Ranson is North Jefferson Elementary School, where about 300 students attend.

Right across the road, developers want to build a 460,000-square-foot coal- and gas-fired manufacturing plant called Rockwool. The plant would create stone wool insulation — and emit potentially hazardous material, like formaldehyde and particulate matter through smokestacks.

It’s all perfectly legal. The U.S. Environmental Protection Agency’s voluntary school siting guidelines address building a school near contaminated areas or a factory, but not the other way around.

“This is a really vulnerable time to be introducing this kind of junk into kids’ bodies because those cells are going crazy, and then we’re introducing these things that are known carcinogens across the street from an elementary school,” said Shaun Amos, a nurse in Charles Town who has spoken out against the plant. “It’s crazy.”

When residents found out about the chemicals that might come from the plant and their effects on children, concerns snowballed. Many residents and some elected officials in Jefferson County, which has historically been left alone by coal mining and heavy industry, are now toe-to-toe with state and federal regulators and a massive company.

Rockwool, whose CEO recently delivered a keynote address to help open a big climate change event in New York City, insists its products are environmentally protective and that the plant remains on schedule for completion in mid-2020.

“It’s fair to say this is not exactly what we expected, based on all the efforts and communication we’ve had and we’ve done before the groundbreaking,” said Michael Zarin, vice president for group communications at Rockwool.

Fueled by a combination of milled coal and natural gas, the plant will melt rock at about 2,700 degrees Fahrenheit, creating a lava-like material. The lava is spun at high speeds with injected air, creating woolly fibers that become insulation for buildings. The plant could use between 100,000 and 125,000 gallons of water each day.

Rockwool expects to offer 150 jobs in production and management.

Though the project has been in the works for a few years, Rockwool bought the 130 acres of land in 2017 and announced the facility that month, setting off a series of applications and permits. Among them was a PILOT (payment in lieu of taxes) agreement — a contract signed by Rockwool and the county’s board of education, sheriff and county commission, and Ranson’s city council — that allows the Jefferson County Development Authority to hold the title to the 130 acres and lease it back to Rockwool.

But most residents say they never really knew about the plant. Had they seen the legal advertisement from Rockwool that ran in the Spirit of Jefferson, a weekly newspaper with a 5,000 circulation, the day before Thanksgiving, maybe they could’ve spoken up in time, they said.

But instead, the DEP received no public comments and didn’t hold a public hearing. It didn’t have to.

The lack of comments shows “how off the radar this whole thing was,” said Chris Kinnan, a member of the board of directors at Jefferson County Vision — a nonprofit organization that grew from an 11,000-member Facebook group called Concerned Citizens Against Rockwool Ranson.

“It’s on the heavy side of heavy industry,” Kinnan said.

Now, some entities that signed the PILOT agreement are hoping to pull out. The nearby towns of Shepherdstown and Harpers Ferry have issued statements opposing the plants.

“It really worries us, because one of the things we’re promising our visitors is our vistas are beautiful, our air is fresh and clean, and our people are content,” said Marianne Davis, director of the Shepherdstown Visitors Center. Even if the smokestacks emitted a “rose-smelling scent,” it might disturb people, she said.

That’s a big deal for a county that draws in visitors with Harpers Ferry National Historic Park, the horse racing track at Hollywood Casino at Charles Town Races, and numerous marathons and bike races.

“This is a very quaint town, but it’s a real town. We live here, we shop here, we get our coffee here, we walk back and forth here and talk to friends. We eat too much here. So it’s a real town, and we all take advantage,” Davis said.

“Don’t locate heavy industry next to schools. It’s a basic principle of planning, but it was perverted here,” said Lori Maloney, who also sits on the board of Jefferson County Vision.

Many officials, though, insist that these concerns stem from rumors and false information.

Rockwool committed to putting at least one air monitor in the county, Rockwool spokesman Zarin said. In “all likelihood,” it’ll go on a school’s campus.

“I think it’s worth pausing for a quick second to say we understand the concern when residents are looking at air permits and tons of this and tons of that and there are some big numbers in there, but when you understand where it comes from, when you apply for an air permit you do it under worst-case conditions,” Zarin said.

Nicolas Diehl, executive director of the Jefferson County Development Authority, said having an air monitor could be a learning experience for the elementary school students.

“It’s a mile and a half or so from the school, I think Rockwool has addressed an offer to put air monitoring,” he said. “It’s a great learning experience for the kids too to see what’s going on with air quality and be able to monitor at the school.”

Rockwool maintains it’s doing its best to be a good neighbor and ease concerns. A blurb on the Rockwool website dedicated to the Jefferson County plant says the company has been visiting and exploring the region for the last year.

“The welcome we’ve received has been inspiring. It’s become obvious — selecting West Virginia as our new home was the perfect choice,” the website says.

Some companies don’t answer questions at all, Diehl said, but Rockwool has been transparent.

“I’m not saying they’re not legitimate fears, but I think knowledge is power and they need to go to the source and find info that is factual and truthful,” he said.

“All West Virginians want and deserve clean air and water,” Manchin wrote. “I believe they also deserve peace of mind when it comes to the safety of their air and water quality, especially when a business constructs a new facility that could potentially affect both.”

Rockwool responded on Sept. 4, assuring Manchin that the facility “will have no negative consequences.”

Manchin’s office put out a news release about his letters Sept. 18.

The same day, the West Virginia DEP issued a statement echoing Rockwool’s letter: there’s “no scientific evidence” the facility could hurt human health or the environment.

“Our scientists and engineers with the WVDEP have reviewed all available data and have assured me there is virtually no other state in America that would have denied this permit,” DEP Secretary Austin Caperton said in the release.

The next day, Gov. Jim Justice’s office put out a news release, saying the project was “good news” for West Virginia.

The day after that, state Sen. John Unger, D-Berkeley, put out his own news release, saying he’d introduce a bill in the 2019 session that would require public meetings in communities impacted by Clean Air Act and Clean Water Act permits.

In early September, the Charleston Gazette-Mail sent a Freedom of Information Act request, asking for communication between Rockwool and Justice’s office.

In response, Justice’s office sent a list of speaker bios from the groundbreaking ceremony in Ranson on June 26.

Leslie McLaren, North American manager for Rockwool, gave Damron directions to the site, and recommended Black Dog Coffee. And, she asked, would the governor be wearing a tie?

He does normally wear ties to public events, Damron responded.

Justice ended up not going to the groundbreaking. He had a conflict.

This story has been updated to reflect a correction. The legal advertisement about the plant that ran in the Spirit of Jefferson was from Rockwool, not the Department of Environmental Protection.