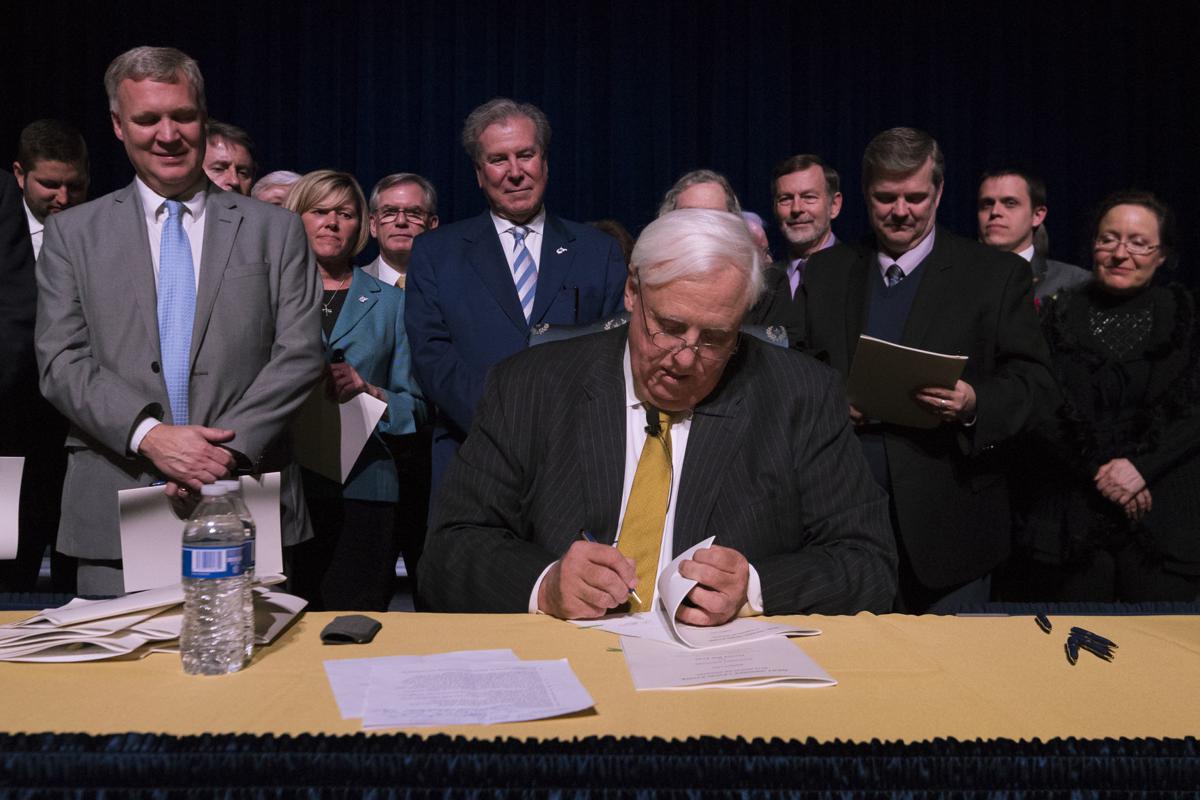 Surrounded by union leaders, Gov. Jim Justice signs a bill increasing the pay for state teachers, school service personnel and State Police by 5 percent during a press conference at the Culture Center Tuesday. 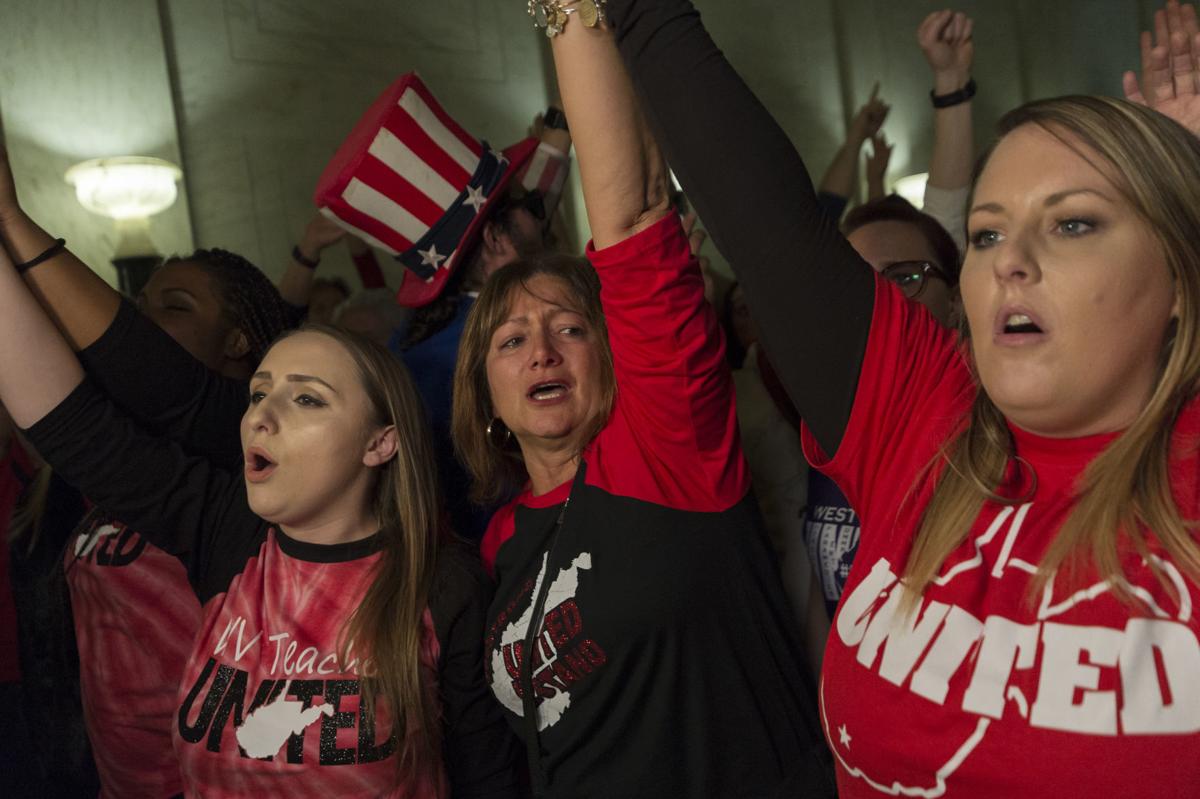 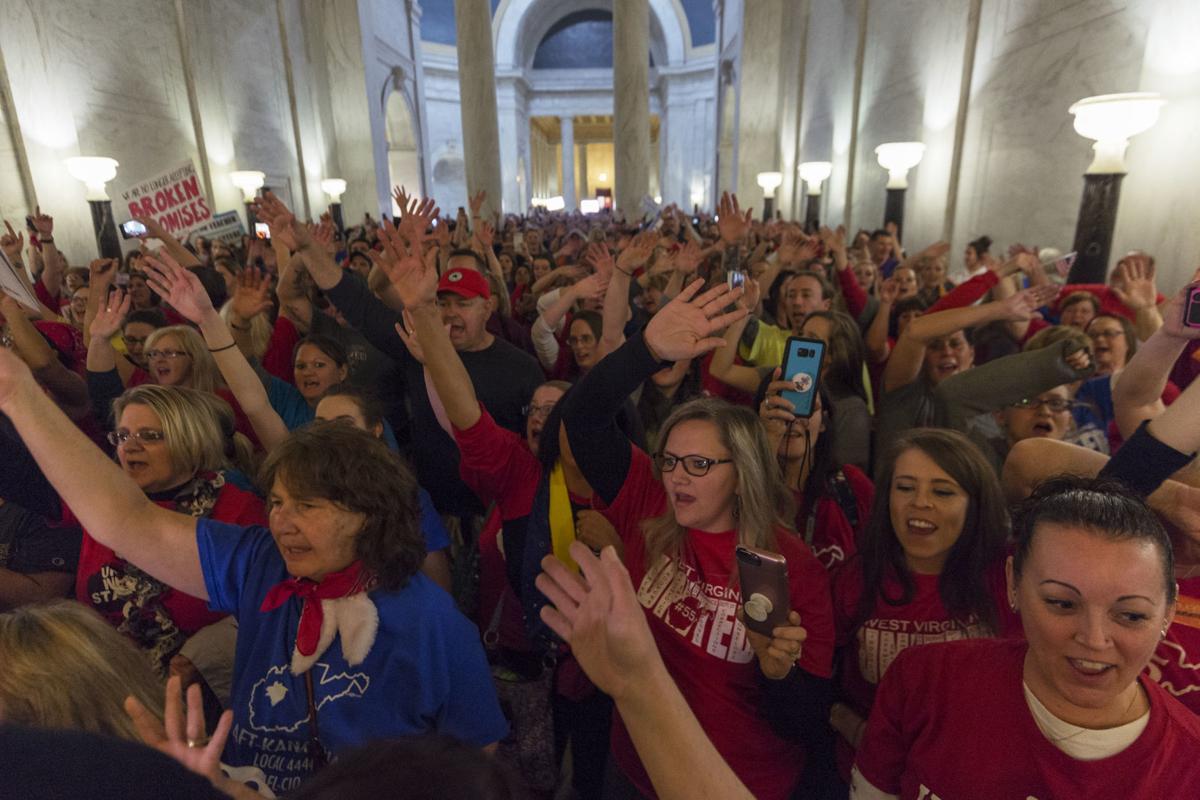 Surrounded by union leaders, Gov. Jim Justice signs a bill increasing the pay for state teachers, school service personnel and State Police by 5 percent during a press conference at the Culture Center Tuesday.

Gov. Jim Justice signed into law a 5 percent pay raise for public school teachers and school service personnel Tuesday that appears to mark the end of the nine-school-day statewide strike.

Before a meeting of a conference committee composed of Senators and members of the House of Delegates, Justice announced that all state employees, along with teachers, school service personnel (a category including bus drivers and cooks) and State Police would receive a 5 percent raise. The raises will take effect next fiscal year, which starts July 1, and equal $2,020 for teachers.

Both houses of the Legislature voted unanimously Tuesday, except for Delegate Frank Deem, R-Wood, who was absent, to accept the conference committee report and pass the bill.

“We have reached a deal,” Justice said on Twitter. “I stood rock solid on the 5 percent teacher pay raise and delivered. Not only this, but my staff and I made additional cuts which will give all state employees 5 percent as well. All the focus should have always been on fairness and getting the kids back in school.”

The legislation (House Bill 4145) that Justice signed Tuesday includes only the teachers, school service workers and West Virginia State Police. Other state employees are planned to receive raises via the budget bill.

Although Justice broke the news, a cadre of legislative leaders erupted in laughter when asked whether Justice was present for the 1 a.m. Tuesday negotiation that led to the compromise. They said his chief of staff, Mike Hall, was present, but not the governor himself, which Justice later confirmed.

At the conference committee hearing, Senate Finance Chairman Craig Blair, R-Berkeley, said the deal comes with a caveat — the Senate only agreed to fund the raises via “very deep” cuts to the budget, including a $20 million slash to general services and Medicaid.

These cuts go beyond already planned fiscal reductions to the Department of Commerce and Division of Tourism. Senate Republicans maintained throughout negotiations that they were skeptical of Justice’s revenue estimates.

“There’s going to be some pain because, with this, we have not agreed, or we will not be using any of the $58 million of the governor’s [new] revenue estimates,” Blair said.

At a meeting Monday evening, Blair and Senate Majority Leader Ryan Ferns, R-Ohio, said Senate Republicans didn’t believe Justice’s revenue figures were accurate, claiming they were made out of emotion, not economic forecasting.

The improved estimate came on the heels of a series of town hall events in which school employees criticized Justice for his handling of the strike.

While Hall and McKown said the calls were regarding the strike, not the new revenue figures, Ferns said he is skeptical the agencies were not concerned about the estimates.

Around 10 a.m. Tuesday, Justice appeared amid the crowd of hundreds that, for many strike days, has been gathered in front of the Senate chamber.

Before Justice’s arrival, the crowd was chanting “We made a deal; pass that bill!”

When he appeared, they were chanting for him to sign the legislation, but then a hush fell over the crowd and people held their phones up to record the governor.

On Tuesday of last week, when Justice announced a proposal that he said would end the strike, Senate President Mitch Carmichael, R-Jackson, wasn’t on board. Justice said this Tuesday morning that Carmichael supported the new deal.

When Justice left the crowd, its members started chanting: “55 strong!”

All 55 counties have participated in this strike, unlike the last strike, in 1990, which included 47 at its peak.

Then the crowd sang John Denver’s “Take Me Home, Country Roads.” Strikers had sung it earlier that morning and, by 11:30 a.m., they were singing it again, and they sang it again after the bill passed the Senate, and again just before Justice signed the bill.

Shortly after Justice announced a deal had been reached, a group of Democratic lawmakers appeared before the crowd, urging the audience to show up for the November election, when all 100 House members, among other lawmakers, have their seats up for grabs.

“If you do not come back this November, they’re going to come back with vengeance,” said Delegate Isaac Sponaugle, D-Pendleton.

He noted that Public Employees Insurance Agency health coverage, which has been the primary concern among many striking employees, isn’t “fixed.” Lawmakers are planning to provide enough funding to keep any premium increases and benefit cuts at bay through at least mid-2019, and the governor has established a task force to study long-term solutions.

“It’s not going to get fixed with the makeup of this current Legislature,” Sponaugle said.

“Remember who made you come here the last two weeks,” Romano said, “and remember in November.”

At about 11:50 a.m., the crowd was doing a call-and-response chant: “We’re not leaving!” some chanted, while others responded “Until you sign it!”

At one point, members of the crowd outside the Senate chamber did something rarely seen before — they sat down.

He’s a teacher at Cabell County’s Explorer Academy and a member of the band MFB who, decked out in his “Funkle Sam” stars and stripes outfit, complete with top hat, has been somewhat of a crowd emcee.

“Plus, it was kind of a premature celebration,” Casto said of the earlier adulation. The Senate had not yet passed the bill.

House Clerk Steve Harrison was cheered as a hero as he transported the bill from the House to the Senate.

Huntington Middle School teacher Adam Culver — the man who’d returned the day after last week’s “deal” was announced wearing a hat shaped like the end of a banana, mostly black clothes otherwise and a sign containing profanity — was back Tuesday, but in a yellow banana suit.

“Things were a little darker,” Culver said of last week. But while he said last week that the “No. 1 issue was a fix for PEIA,” he said employees seem to be happier now that Justice had provided details about the task force and established it through an executive order.

Sen. Greg Boso, R-Nicholas, likened the factors driving the bill to those that make precious stones.

“It’s like the process of making diamonds — little bit of dust, a lot of pressure, under time, it comes out with the best,” he said. “Obviously, there’s pain associated with change. I’m just thankful we’re able to pay all of our public employees.”

Justice said at the news conference/bill signing that he’d be asking state schools Superintendent Steve Paine “to work with county superintendents to create flexibility with respect to satisfying the calendar-day requirements.” Several people in the audience whispered “yes” in response.

“Our children have suffered enough,” Justice said. This elicited cheers and applause.

“We need to return some sense of normalcy to the education process,” he said. “Families should and will have the time for their summer vacations.”

Justice was asked if, by “flexibility,” he meant not having to make up classroom days missed because of the strike, as well as if that wouldn’t be even more academically damaging to students. He said Paine and the state Board of Education have “educational wisdom beyond me.”

The audience clapped at this, and Justice said, “Now I’m going to sign.”

“At the direction of Governor Justice, I will immediately begin working with our State Board of Education to explore all possible avenues for local districts to make up the instructional time that has been lost throughout the last nine days,” Paine said in a news release after Justice’s comments.

“My staff and I will work with each of our counties to identify every opportunity to maximize meaningful instruction while also minimizing disruption to students and families,” Paine said. “We are committed to providing timely technical assistance to each individual county to innovatively restructure their calendars and to find additional flexibility within their local attendance policies to better accommodate the needs of families.”

Dale Lee, president of the West Virginia Education Association union, said of the strike that “teachers and service professionals across the state have put their lives on the line and put them on hold to make sure democracy was upheld and that their voices were heard. This allows teachers to come back to West Virginia and stay. We’re turning the corner, folks; it’s time to come back home.

“I think we’ve awakened a sleeping giant,” Lee said. “Now we’ve learned that, if we open our eyes and unite collectively and watch the process and make sure that we’re following the process, that we have strength, far more than we ever believed.”

He said he isn’t concerned about the possibility of not having 180 separate school days, saying teachers “know that they will be able to get [students] to the point they need to be.”

Before the crowd dispersed Tuesday, it chanted “West Virginia first; Oklahoma next!” Oklahoma school employees have been mulling a strike, according to news reports.

Randi Weingarten, president of the American Federation of Teachers union, which has state and county arms here, said “right-wing” attacks on public education are occurring in West Virginia and other states.

Keep Healthy and Stress Less Through the Holidays and Beyond [Video]

Celebrating the Past, Looking Toward the Future This Diabetes Awareness Month