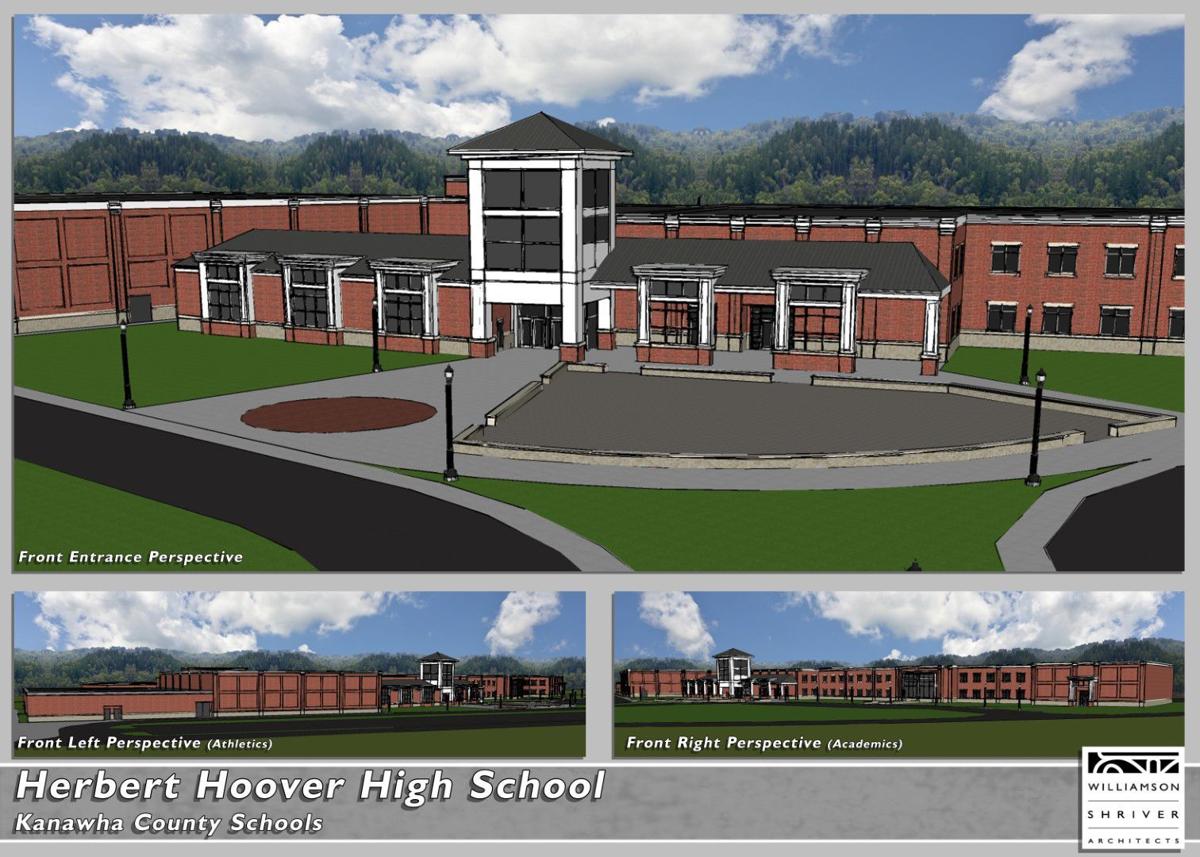 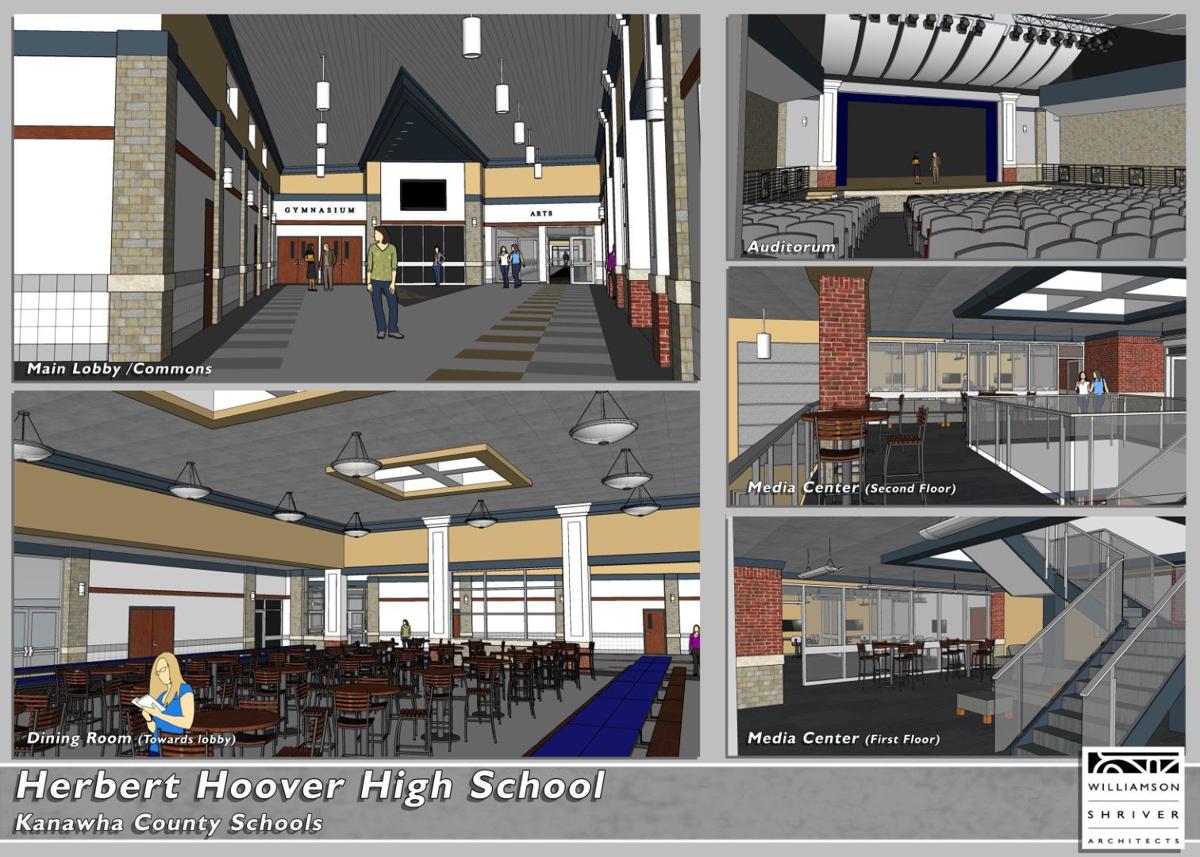 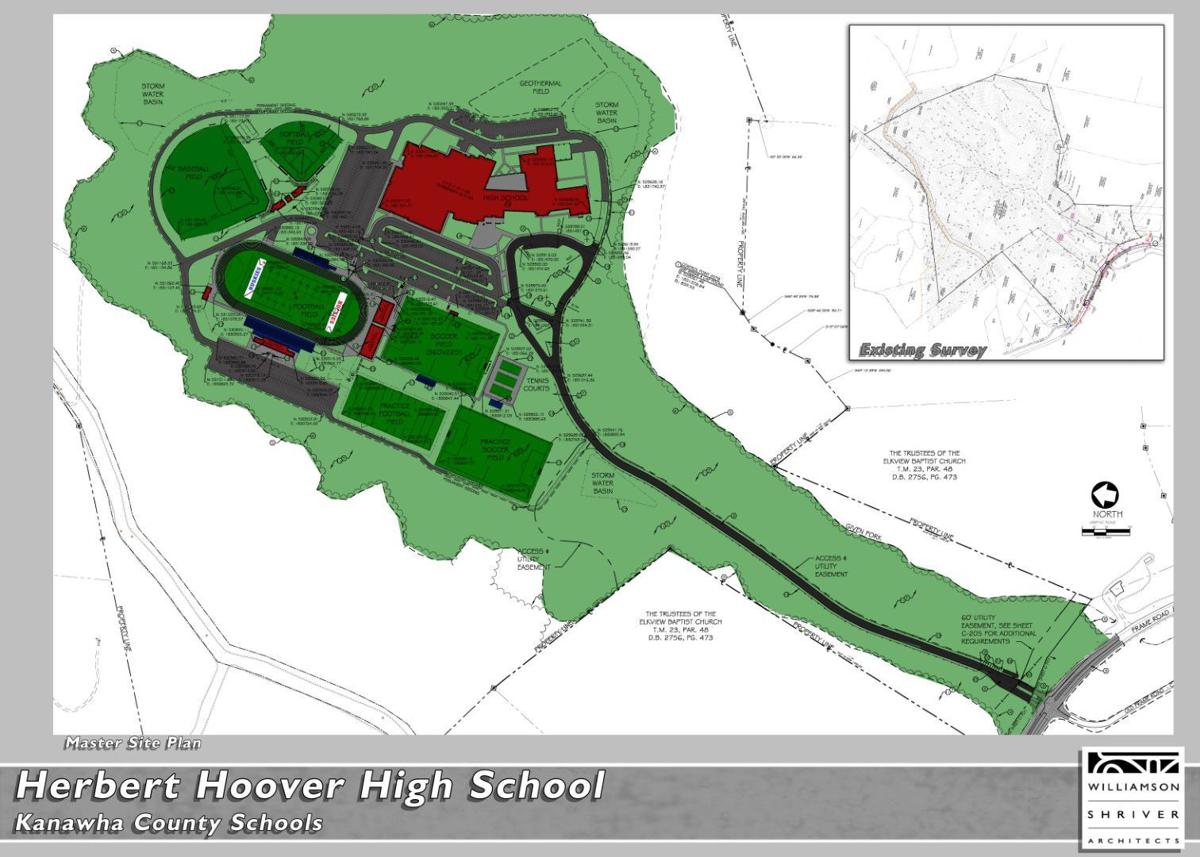 This site plan for the proposed new Herbert Hoover High shows a road, to be called Husky Way, after the school mascot, leading up to the complex. The large red building is the school. The red boxes near the various fields include locker rooms, bathrooms and concessions and ticket stands. The larger blue box below the football field is the home bleachers, while the smaller blue box is the visitor bleachers.

This site plan for the proposed new Herbert Hoover High shows a road, to be called Husky Way, after the school mascot, leading up to the complex. The large red building is the school. The red boxes near the various fields include locker rooms, bathrooms and concessions and ticket stands. The larger blue box below the football field is the home bleachers, while the smaller blue box is the visitor bleachers.

Plans for the new Herbert Hoover High School include geothermal heating and cooling, a football field with the home bleachers built into a hillside, practice football and soccer fields, tennis courts and batting cages.

The Kanawha County public school system released Thursday a virtual video tour of the planned school building. You can view it by going to kcs.kana.k12.wv.us and clicking “Update — New Elk River Area Schools” under the news list in the middle of the page.

Shriver showed the images at a public meeting Wednesday on the planned school’s draft environmental assessment.

The Federal Emergency Management Agency, which prepared the draft alongside West Virginia-based Terradon Corp., is accepting comments on the draft assessment through Thursday of next week. The comment period began Aug. 27.

You can view the draft and associated documents at fema.gov/disaster/4273 or at the Clendenin, Elk Valley and Charleston libraries.

Shriver said the school would be roughly divided into halves, with the main entrance in the middle.

The right side, he said, would be a two-story academic section, with a career-technical education wing jutting out from the rear of that half. Kelley said that would be home to the Fab Lab, a wood shop and Simulated Workplace, a program where students form mock companies and produce products.

Kelley said that, although a flat picture doesn’t really show it, the athletic fields around the school will be on different elevations.

The new Hoover property, which the school system has already bought from Elkview Baptist Church, is about 240 acres. It’s across Frame Road from a state Division of Highways location, between the Elkview exit of Interstate 79 and U.S. 119.

Shriver said he lives in the area and his son went to Elkview Middle and Hoover.

“It’s a privilege to be part of restoring this building,” he said.

The school system demolished Hoover’s former building after it was damaged in the June 2016 flood.

In the 2016-17 school year, Hoover students attended classes in the Elkview Middle building, going in the afternoons while middle schoolers took the morning shift.

Since fall of 2017, the high schoolers have been in a series of trailer classrooms on stilts, built right next to Elkview Middle.

FEMA is expected to pay for 75-90 percent of the new school.

Wednesday’s public meeting was held in the middle school. About 50 people attended, including several members of the Kanawha County Board of Education, employees of the school system and the state School Building Authority, and other officials.

Stephanie Everfield, the FEMA Region III regional environmental officer, said she expects FEMA will issue an official “finding of no significant impact” for the project. That would be the end of the environmental review, she said.

But Everfield invited questions and public comments regarding the draft environmental assessment, saying FEMA may have overlooked something.

“If we may have missed anything — like we didn’t consider the safety of the students based on, let’s say, the traffic study, or they don’t feel that it’s safe that this is the correct location for the school, if they have information about any archaeological sites that we may have missed, or if they have any information about the location of the school or the history of that site — they can contact us,” Everfield said.

“Sometimes we do have surprises,” she said. “We didn’t grow up here, we didn’t live here, so what they may know about the site, they can let us know.”

You can email comments to FEMA-R3-EHP-PublicComment@fema.dhs.gov

You can mail comments to:

FEMA OKs $52M to rebuild Herbert Hoover High; more money could be on the way