Members of the Herbert Hoover High School Class of 2020 stand and face their families sitting in the stands at Laidley Field during their graduation ceremony Tuesday morning. 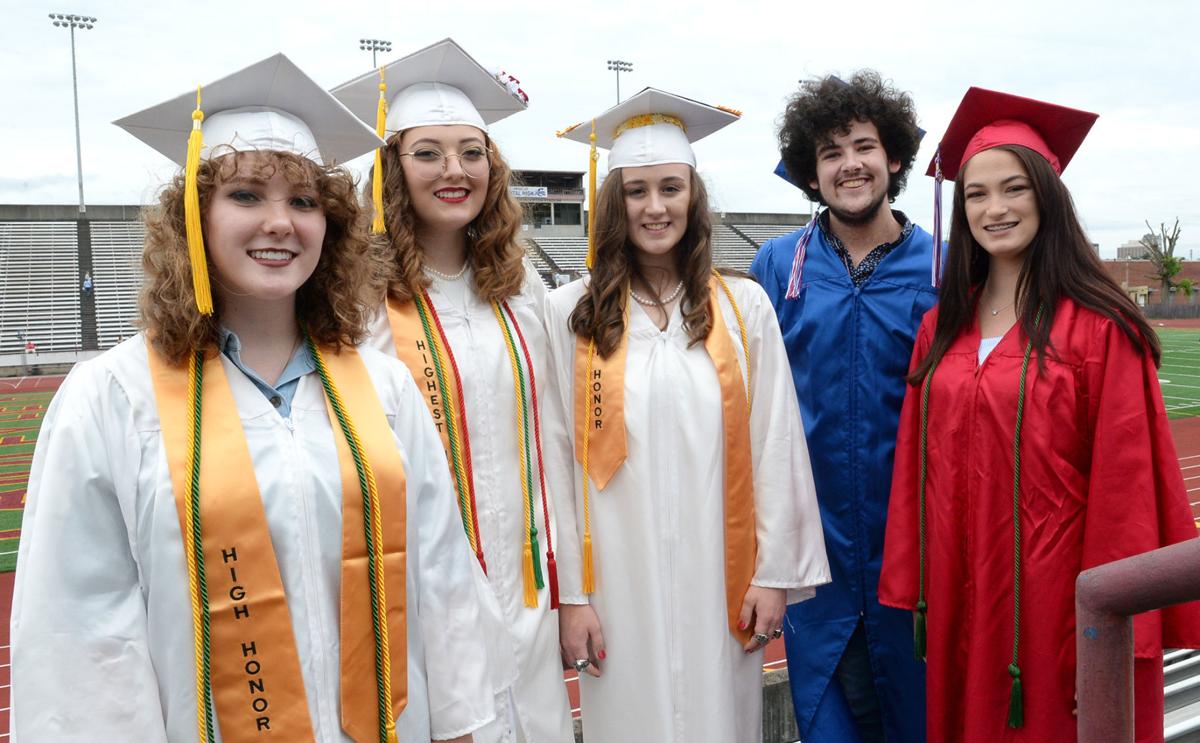 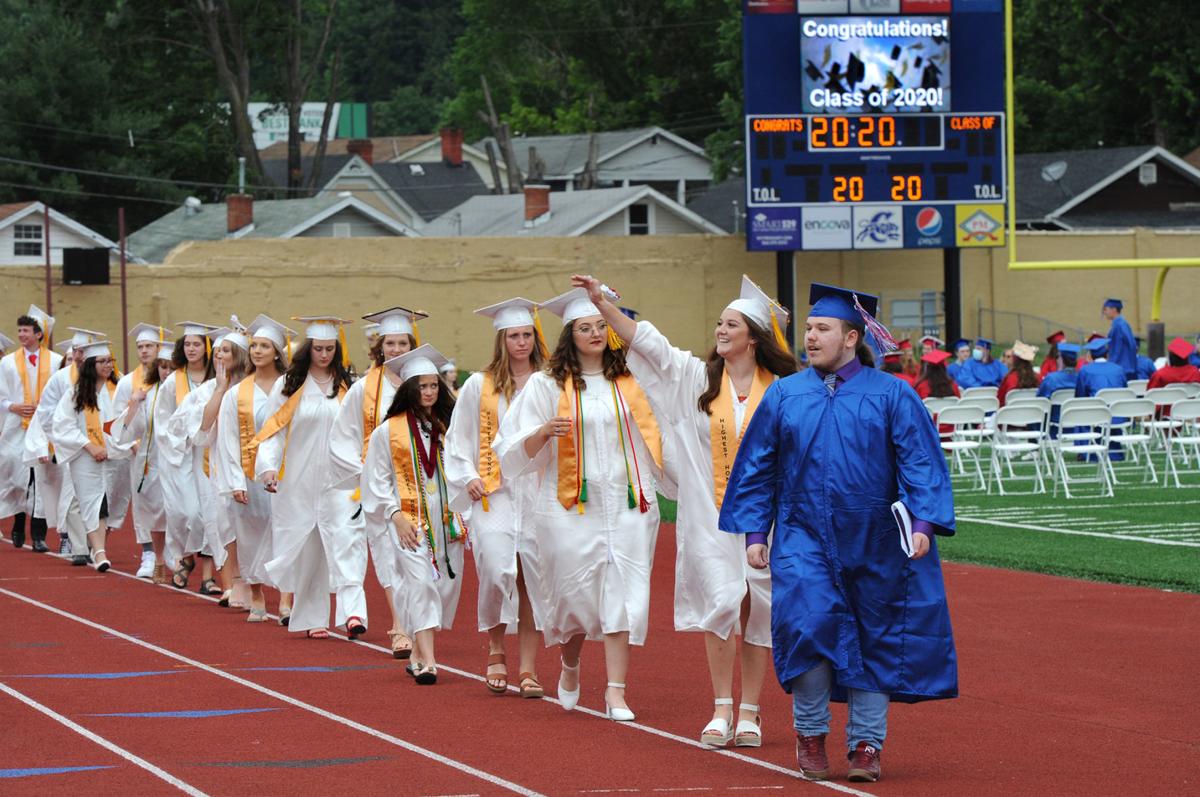 2020 Herbert Hoover graduates walk along the track at Laidley Field as they exit following their graduation ceremony Tuesday morning. 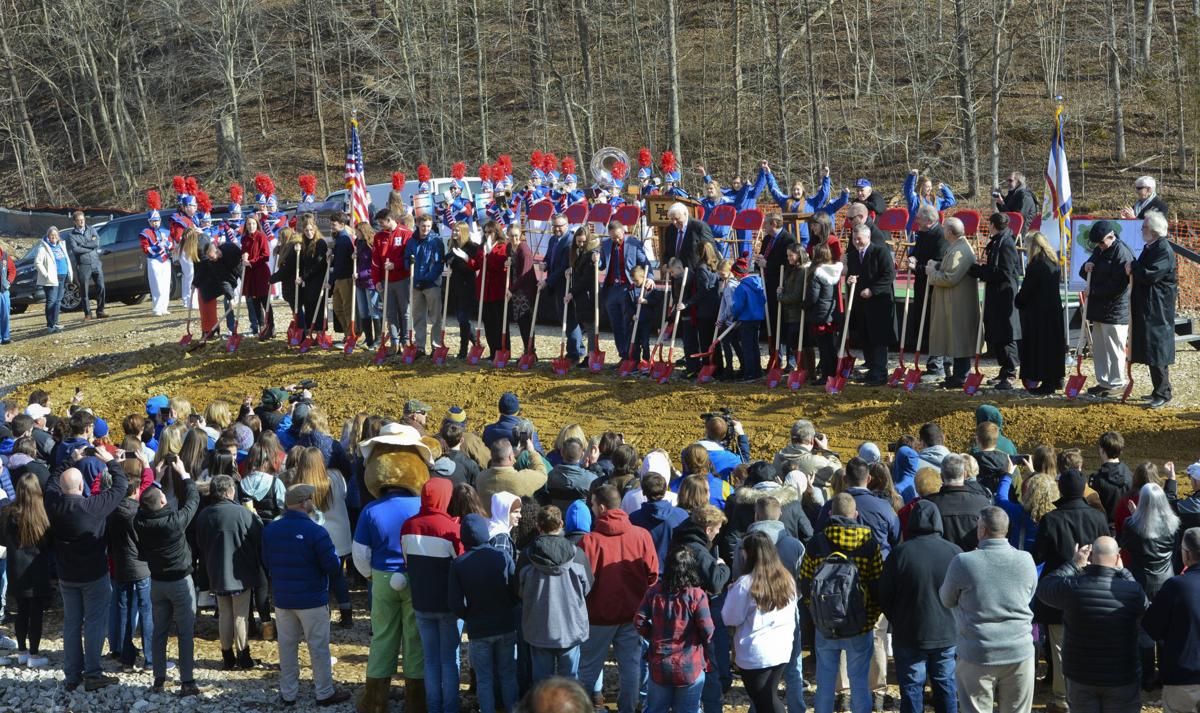 Herbert Hoover students and officials, including Gov. Jim Justice, turn over a shovel full of dirt during the groundbreaking ceremonies Wednesday, Jan. 22. The new school will be built in the Givens Fork area off Frame Road, which is just off the Elkview Interstate 79 exit. 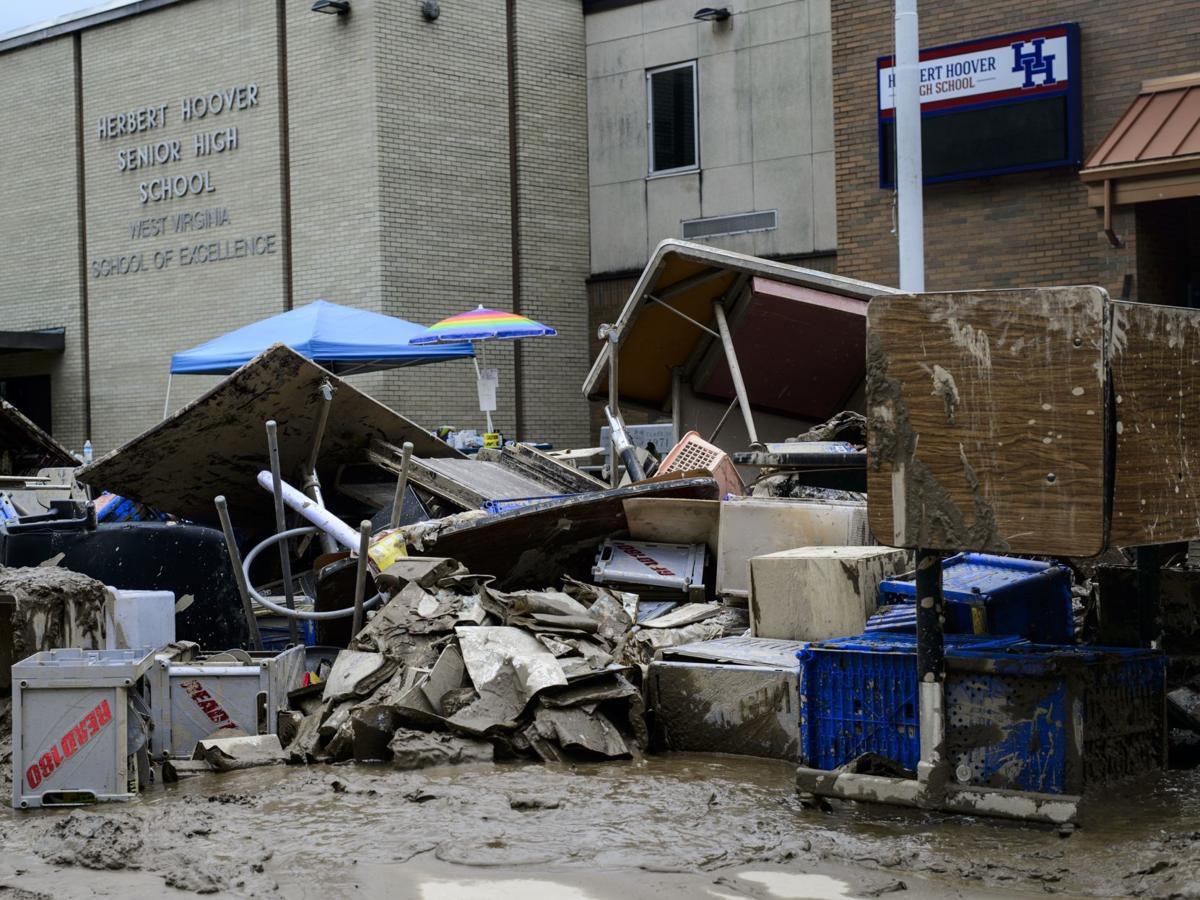 Furniture, paper files and other items covered in flood mud sit outside on the sidewalk at Herbert Hoover High School in Clendenin July 4, 2016. 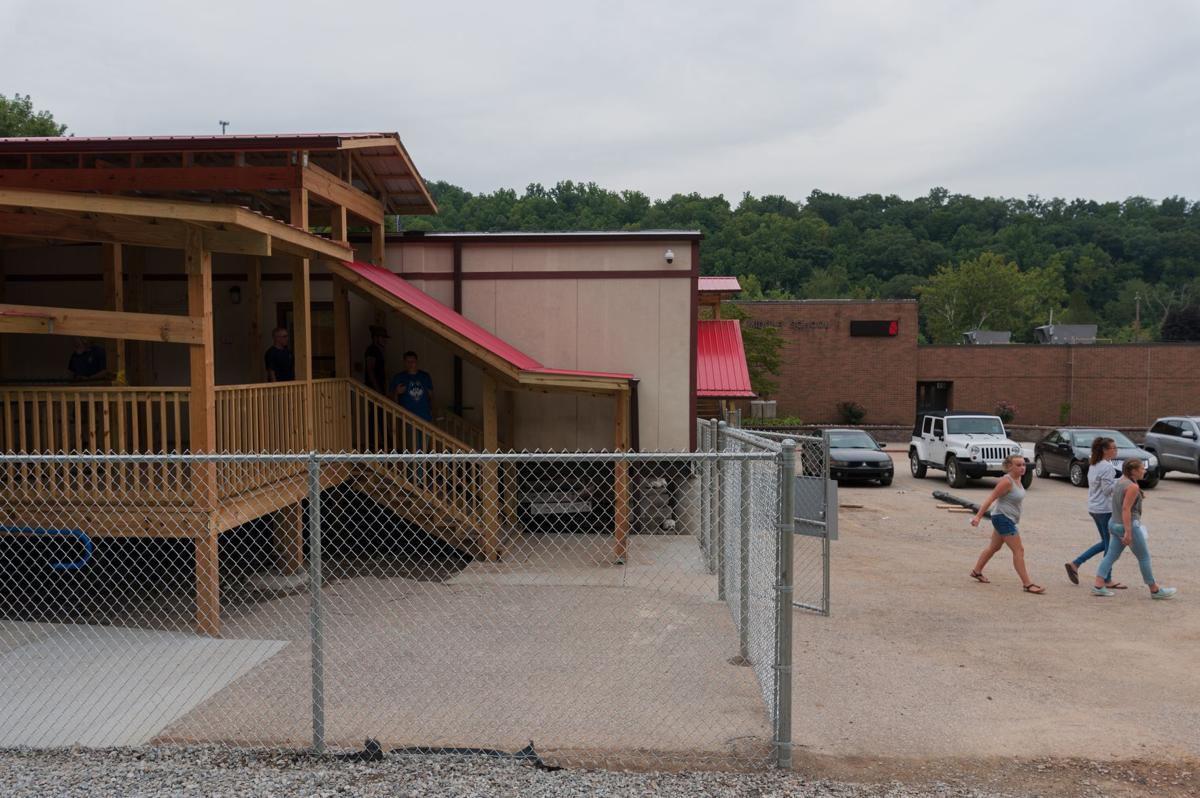 One of the entrances to Herbert Hoover High’s portable complex is seen adjacent to Elkview Middle School, in Elkview, in August 2017. 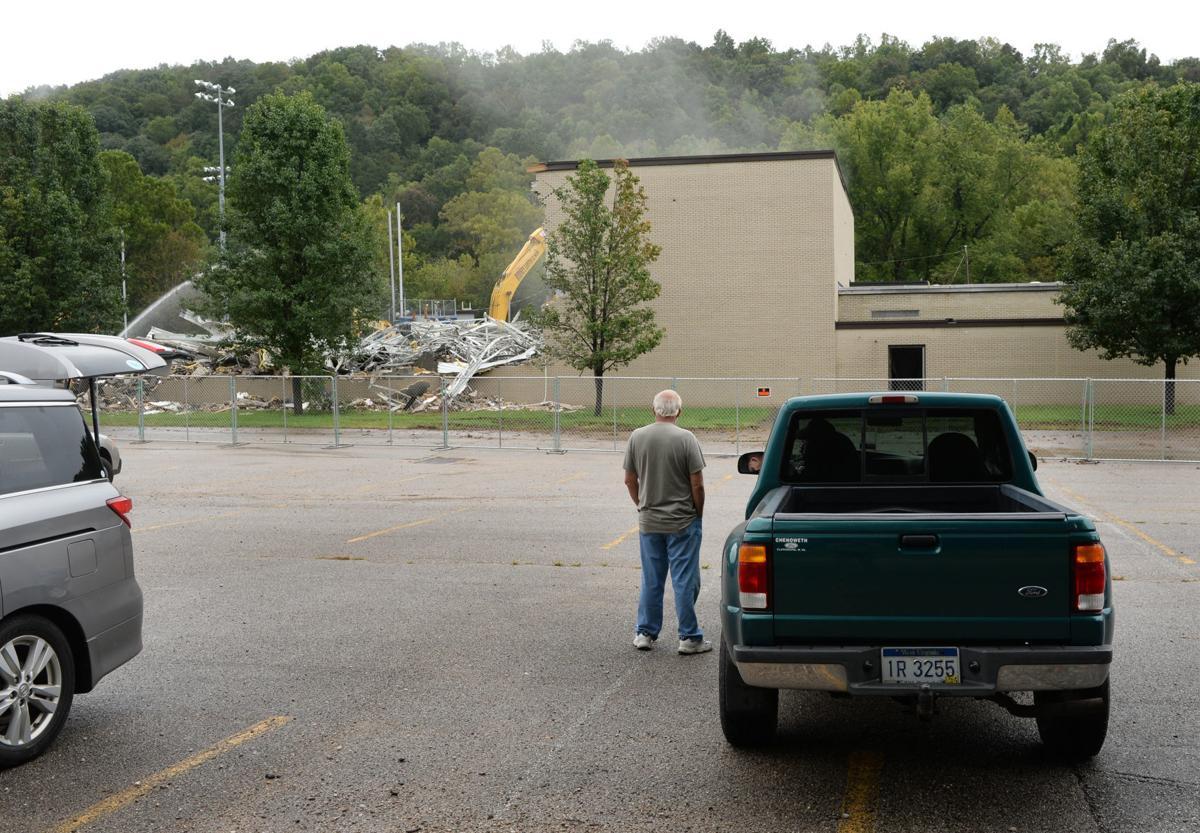 Residents and classmates watch the demolition of Herbert Hoover High School in 2018. The school suffered severe damage in the June 2016 flood. 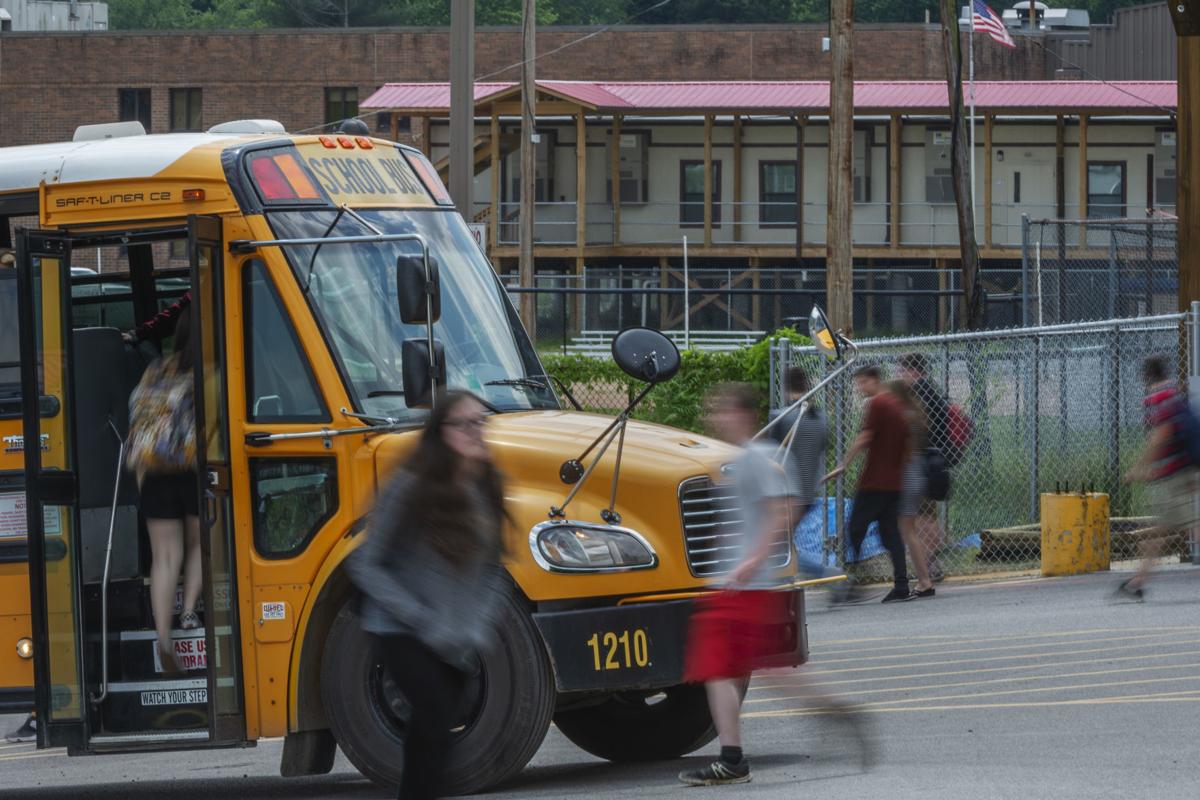 Herbert Hoover High School students board buses Thursday, May 31, 2018, two days before summer break at their temporary classrooms on the Elkview Middle School campus in Elkview.

Members of the Herbert Hoover High School Class of 2020 gathered Tuesday morning at Laidley Field to celebrate a final rite of passage of their high school life — graduation.

After crossing a stage, they took their seats, spaced apart on the field on either side of the 50-yard-line. The senior slideshow was on the scoreboard, and some family in the bleachers wore masks.

“You have had a nontraditional high school experience, to say the least,” Principal Mike Kelley said, above the sound of vehicles whizzing by on the interstate behind University of Charleston Stadium. “Yet, you have excelled.”

Amid an ongoing global pandemic, with hugs and handshakes forbidden, it was a ceremony that likely none of the teens could have imagined when they entered high school four years ago. But several Herbert Hoover seniors said they have kind of grown accustomed to weird.

“We haven’t done anything normal at Hoover in my four years,” said Delani Buckner, 17.

“It kind of feels normal now for it to be not normal,” Hannah Collins, 18, added.

“You don’t really hear a lot of stories of half-days your freshman year, and then going into portables for three years, and then having a graduation that turns into a parade,” Isaak Rogers, 17, noted, referencing last month’s drive-by celebration honoring seniors.

Before their freshman year, the June 2016 flood — which struck exactly four years ago Tuesday — put more than 6 feet of water into the building that was to have been their high school. The Kanawha County school system closed the school and eventually tore it down.

Leah Westfall, 18, said she toured the original school on “step-up day,” before her freshman year.

“I got to see the gym and everything, and then I got really excited,” she said, with a laugh. “And I think it was June 23 when the flood happened and I was like, ‘Oh no, my new school!’ ”

During their freshman year, they only attended school in the afternoons at Elkview Middle — where many had just left eighth grade.

“Then, you’re a ninth-grader still feeling kind of like an eighth-grader because you’re still in the middle school,” Westfall said.

For their sophomore, junior and half of their senior years, they attended trailer classrooms on stilts the school system installed on the middle school parking lot. The buildings were fused together with boardwalks and dubbed a temporary high school.

“My first year there, it was so odd to me,” said Kiah Smith, 17. “I couldn’t wrap my head around it that I was going to a school that was basically outside.”

Still, they ate lunch in the middle school cafeteria.

Finally, for most of their last semester, the state kicked them out of their parking-lot trailer school as the coronavirus pandemic prompted schools to switch to distance learning.

In the midst of all this, Rogers noted, were the first two statewide school worker strikes in West Virginia history, which closed all public schools for days.

“I wasn’t necessarily sad, at first,” Collins said of the pandemic school shutdown, “because it just kind of felt typical for our class to have something like that happen to us.”

All things considered, the students said they liked going to the Hoover on stilts.

“It looks a lot worse from the outside than it actually is,” Rogers said.

To get from one class to another at the current Hoover, students walk outside along the boardwalks. This allows them to experience underrated things, like sunlight and the sound of birds.

“It was really nice in the fall and the late spring, toward the end of the school year,” Buckner said.

She said she would have liked to not get rained on, though. The boardwalks have tin roofs, but precipitation can get under that.

For Collins, “one of my favorite moments was when it rained, like, really hard. Everyone just had so much fun. The wind just throws the rain on the boardwalk and you get wet, but it’s kind of fun and you just carry on with all your friends and you run back and forth in it.”

During the winter, the cold and ice were issues. But Rogers said people would write in the snow.

“I think that was something different,” he said, “to be able to walk outside and take a minute before you walk back into a classroom.”

Westfall said, “It was honestly not disappointing at all, because you were out of the middle school [after freshman year] and you had full days and it was our new home, our new school, and you were just kind of like happy to have it.”

Some students even said they felt attending school in trailers prepared them for college, where there generally aren’t locker rooms and you walk outside between classes.

“As weird as it was to be in portables, and as weird as it was for this last half of a year to do online learning, I think it really does show what college is going to be,” Rogers said. “A lot of that work that you do is on your own.”

Smith, who took two college-level classes, said she worked about five days a week part-time at a Donut Connection when in-person classes shut down. Her mother also works there.

The county provides iPad tablet computers to all high school students, but Smith said she doesn’t have internet at home. She said she completed a lot of the work, including an Advanced Placement test, on her phone.

She said she was trying to save up money for college, for herself and for her family, in case her dad lost his job in the coal industry.

The students might have lost their school in the June 2016 flood, but buildings can be rebuilt. The county broke ground on the new Hoover in January.

It wasn’t just prom or a traditional graduation they lost out on — four of the five interviewed for this report lost the end of their show choir competition season. Much of the music and theater equipment and supplies were destroyed during the flood.

“Slowly, over freshman and sophomore year, we started to gather more supplies and stuff like that and we did a lot of fundraising and, junior year, we finally got to put something on,” Rogers said.

After that, “Clue” was to be the seniors’ swan song. Collins said their task over spring break was to memorize their scripts, but the school never reopened.

Smith was in show choir for three years, while Westfall, Rogers and Collins were in it all four years of high school.

“When I started show choir, I was a completely different person,” Collins said. “Very shy and soft-spoken.

“Whereas, now, I’d say I’m pretty confident in myself and enjoy being around people. I’ve gotten so close to all of the people involved in show choir, it’s like an entire family thing to me. So that seems like a lot more to lose than a prom does — even though I’m sitting here looking at my prom dress right now.”

“I don’t even feel done,” she said before Tuesday’s graduation. “I kind of feel like I’m still in high school, just because I didn’t get that closure.”

When Smith went to the school to pick up her diploma earlier this month, she said she “about started crying when I saw my music teacher, because I miss going to her room in the morning.”

Herbert Hoover, in all its post-flood permutations, was still their home.

A couple of students said they worried after the flood that Hoover would simply disappear. They were happy to get to stay together, rather than being divided among other high schools.

“None of it’s been conventional, if that makes sense,” Buckner said. “We haven’t gone to the standard building where you have a locker, you have a cafeteria. I didn’t get to experience that, but I don’t think that’s what makes a school. A school — a home — is a home because of the people in it. Whatever Hoover may be, it’s the people who make it Hoover.”