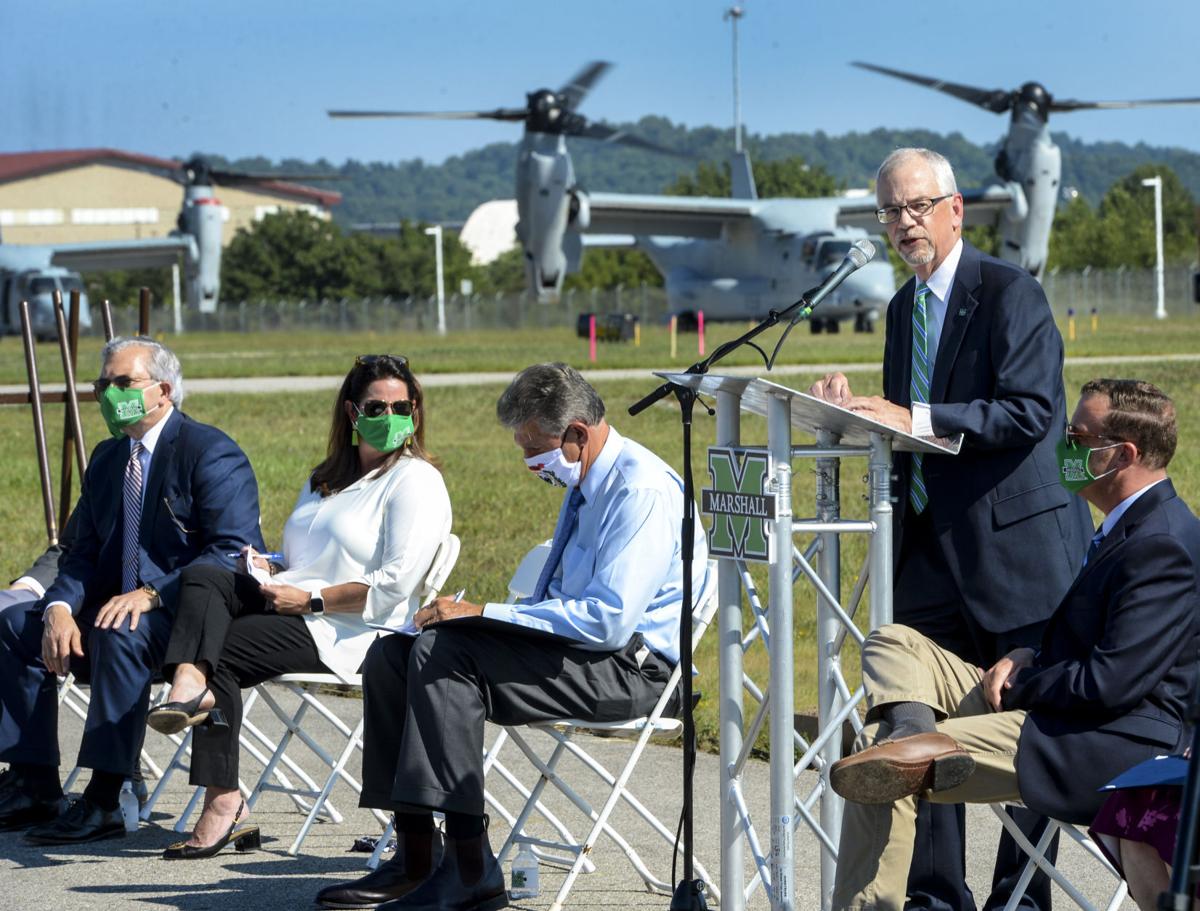 Jerome Gilbert, president of Marshall University, speaks about the groundbreaking of the new Marshall School of Aviation Thursday morning at Yeager Airport in Charleston, while a military aircraft known as an Osprey takes off behind him. 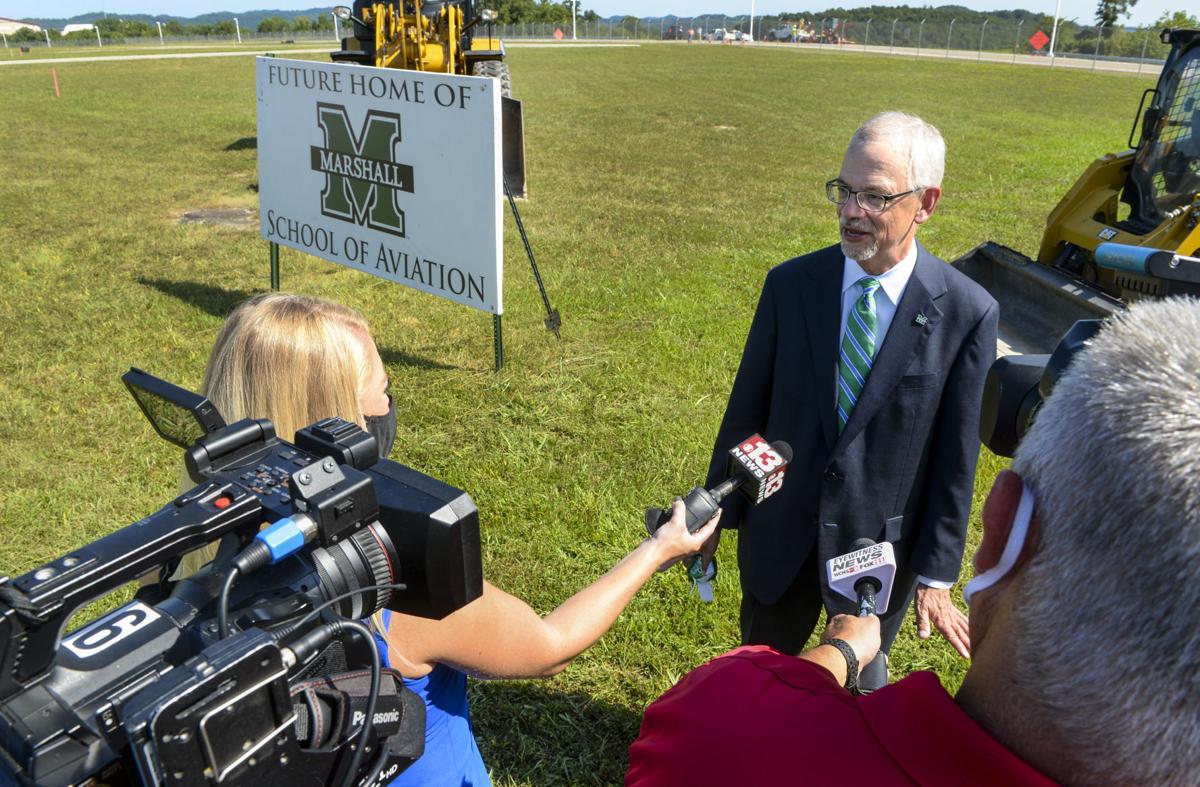 Marshall University President Jerome Gilbert talks to reporters on Thursday about the groundbreaking of the new Marshall School of Aviation at Yeager Airport in Charleston. 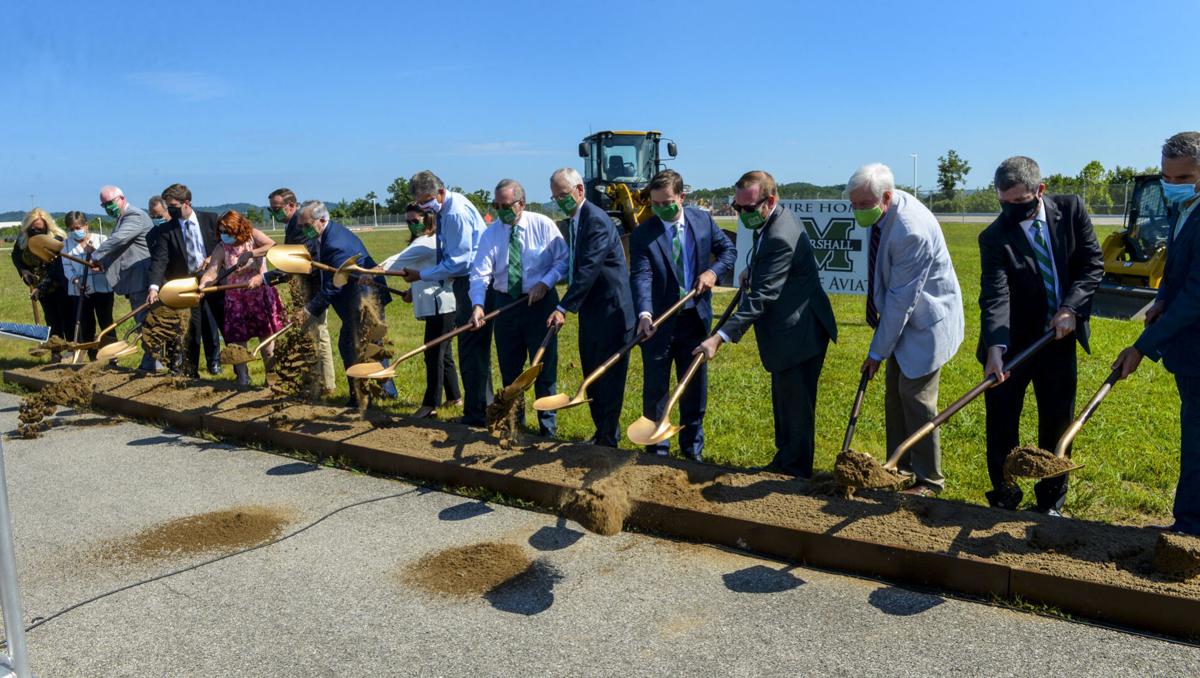 Federal, state, local and school officials turn the dirt in the ceremonial groundbreaking of the new Marshall School of Aviation at Yeager Airport on Thursday.

Jerome Gilbert, president of Marshall University, speaks about the groundbreaking of the new Marshall School of Aviation Thursday morning at Yeager Airport in Charleston, while a military aircraft known as an Osprey takes off behind him.

Marshall University President Jerome Gilbert talks to reporters on Thursday about the groundbreaking of the new Marshall School of Aviation at Yeager Airport in Charleston.

Federal, state, local and school officials turn the dirt in the ceremonial groundbreaking of the new Marshall School of Aviation at Yeager Airport on Thursday.

Two years into his presidency at Marshall University, Jerome Gilbert was approached by a delegation from Charleston’s Yeager Airport with what some higher education executives could have dismissed as a pie-in-the-sky plan.

“They suggested that the aviation industry had become stressed due to the small number of pilots qualified to fly for commercial airlines,” Gilbert recalled. They sought a partnership with Marshall to create a flight school at the Charleston airport.

Instead of avoiding uncharted academic waters and the challenge of raising the millions of dollars in development money such a project would require, Gilbert and his staff met with aviation industry leaders, federal regulators and other experts and studied the feasibility of Yeager’s proposal. It turned out the project was viable. Gilbert became one of its strongest advocates.

On Thursday, two years after his initial meeting with Yeager officials, Gilbert was among those speaking at a groundbreaking ceremony at the Charleston airport for Marshall’s flight school, on track to open in fall 2021.

“This is where more than 200 students in the Bill Noe Flight School will learn to fly,” Gilbert said as he stood on the site of what will become the parking apron for the flight school’s 12,000-square-foot hangar.

The flight school, which will include a 10,000-square-foot classroom building adjacent to the hangar, will produce 50 graduates annually, who will receive fixed-wing commercial pilot bachelor’s degrees, adding to the diversity of Marshall’s academic program, according to Gilbert. Additional classroom study for the aviation school will take place at Marshall’s South Charleston campus.

The school is named in honor of alumnus Bill Noe, who became a pilot and flight instructor after graduation and is now president and COO of NetJets, the world’s largest private jet transportation company.

Gilbert thanked the West Virginia-based Maier Foundation for a $1.5 million grant, some of which was used to buy the flight school’s first aircraft, a pair of new Cirrus SR-20s. The Marshall president also voiced his appreciation for a $750,000 gift from AEP, used to purchase a flight simulator.

“I can’t tell you how impressed I am that Marshall University found this niche,” said Sen. Joe Manchin, D- W.Va. “It provides a great opportunity for the entire state,” now home to more than 4,000 aerospace jobs.

Manchin and fellow U.S. Sen. Shelley Moore Capito, R-W.Va., are both members of the Senate Appropriations Committee, which so far has allocated more than $3.7 million for the flight school. The two are also pursuing an additional $1.5 million Economic Development Administration grant to pay for bringing water and sewer service to the school.

“Our goal is to make Yeager Airport a key driver of the area’s economic engine,” said Ed Hill, chairman of the airport’s governing board. “The Marshall University Aviation School is jet fuel for that engine.”

“President Kennedy said we do things like this not because they are easy, but because they are hard,” said Kanawha County Commission President Kent Carper. “In this case, with flights down 70% due to COVID-19 and the economy in its worst shape in 100 years, this project was not just hard — it was next to impossible.”

In addition to elevating Marshall’s profile in the Kanawha Valley, the flight school “will bring a lot of another kind of green to the Charleston area,” Carper said. With Thursday’s groundbreaking, “we are now officially a part of the Thundering Herd family,” he said.

“This helps make this area a hub for education and innovation,” said fellow Kanawha County Commissioner Ben Salango, also the Democratic nominee for governor. “It will attract students from across the nation.

“Think of the attraction this is going to bring to West Virginia,” said Gov. Jim Justice. “I can never congratulate Marshall enough.”

The rumble of two departing helicopters and the roar of accelerating engines from a Marine V-22 Osprey preparing for a vertical takeoff 100 yards away forced Justice to momentarily pause his remarks.