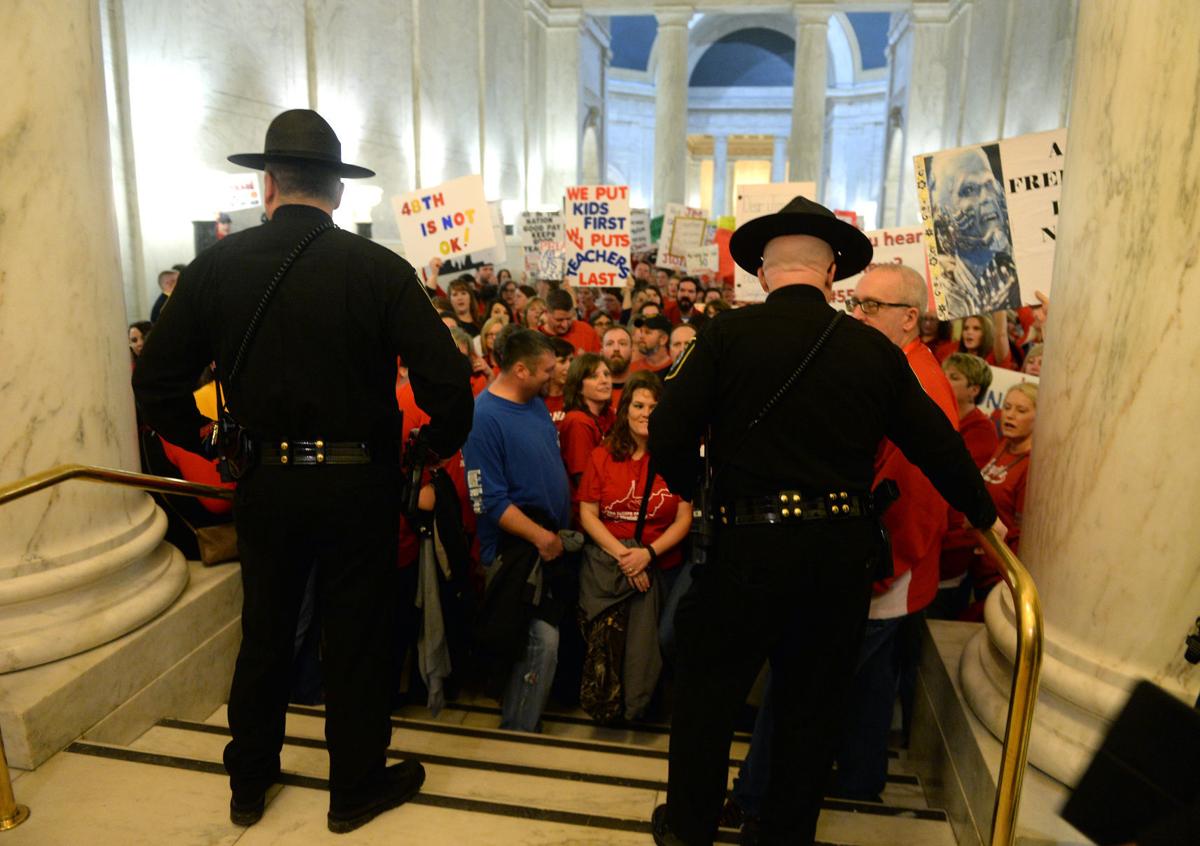 Capitol police stand guard in front of the House of Delegates chambers Friday as protesting teachers shout chants to the Legislature. 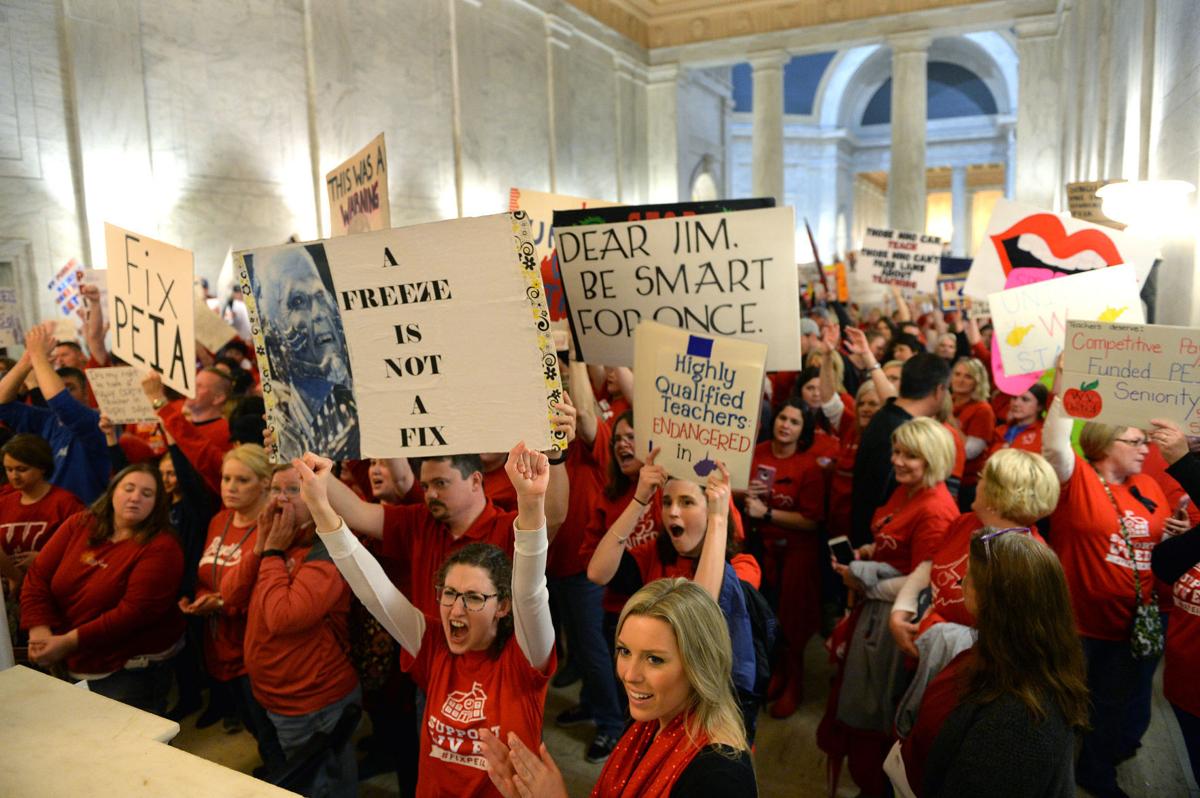 Hundreds of teachers and other public school employees rally outside the House of Delegates chamber Friday. Teachers from across the state are demanding higher pay and health insurance funding. They’ve scheduled a walkout for Thursday and Friday.

Capitol police stand guard in front of the House of Delegates chambers Friday as protesting teachers shout chants to the Legislature.

Hundreds of teachers and other public school employees rally outside the House of Delegates chamber Friday. Teachers from across the state are demanding higher pay and health insurance funding. They’ve scheduled a walkout for Thursday and Friday.

Southern West Virginia counties weren’t the only ones with walkouts this time. Brooke County, the second-most northern county, and Wetzel County, at the base of the Northern Panhandle, joined in on Friday.

Ahead lies the possibility of a statewide school employees strike.

Friday was reminiscent of the walkouts and rally on Feb. 2, when hundreds of school employees flooded the state Capitol, their song of “Na, na, na, na, na, na, na, na, hey, hey, goodbye!” audible in the House of Delegates chamber as Speaker Tim Armstead, R-Kanawha, was giving a rare speech from the House floor.

“We will strike! We will strike!” came chants Friday from among another crowd of hundreds of red-shirted school employees who gathered in the Statehouse, outside the House chamber.

County union leaders said workers planned to arrive at the Capitol around 9 a.m. After 10 a.m., people carrying umbrellas were still lined up in the rain outside the two public entryways, waiting to get through metal detectors.

Jill Smith, a sixth-grade teacher at New Haven Elementary, was among a group of Mason employees who were among the first in the Capitol Friday morning. She said she’s a single parent, and pay raises and maintaining health insurance benefits are the two biggest issues to her.

Echoing a refrain common among school employees Friday at the Capitol, she wasn’t satisfied with the Republican proposal to freeze, for one year, Public Employees Insurance Agency

premiums and other aspects of the coverage as it currently exists by providing more funding to avoid previously approved benefit cuts and cost increases.

“I just feel that’s just postponing the same issue until next year; it’s not really a fix,” she said. She said she wants a longer-term funding solution.

“That’s a Band-Aid,” Loretta Davis, a Lincoln bus driver, said of the freeze. Unlike the many red-shirted employees, she wore a yellow shirt of the West Virginia School Service Personnel Association.

“I want it to stay the way it is — guaranteed,” Davis said.

Deidra Roberts, a speech language pathologist at Hamlin PreK-8 in Lincoln, said she’s seen benefits deteriorate and “all of this has aroused a sleeping giant.”

Angry school employees yelled out Friday from the galleries they filled above the Senate chamber when senators, before 1 p.m., abruptly recessed their floor session until 6 p.m.

“We’ll be back at 6!” a crowd outside the chamber chanted.

Employees did return — this time with a smaller crowd that still numbered in the hundreds. They gathered outside the Senate chamber, and their cries could be heard through the wooden doors.

In the House, Republican delegates voted down a mostly Democrat-backed motion to meet again Saturday at noon, an hour before the start of another public employee rally — with national union leaders as speakers.

“Today, we thought we might get some action on a pay raise bill. Nothing,” said Delegate Isaac Sponaugle, D-Pendleton, who made the motion to meet again Saturday to “have an opportunity to stop the crisis that’s coming early next week.”

“What I’m afraid of is, coming this Monday or this Tuesday, our schools are going to be shut down across the state because we dilly down here and do nothing,” Sponaugle said. “We know this crisis is coming, the storm is out there, you people are down here today, there’s going to be literally thousands here tomorrow, while we run away.”

State and county leaders of the American Federation of Teachers and the National Education Association have said they have broad support for a statewide strike, although state leaders haven’t publicized the county by county vote totals authorizing that action.

West Virginia’s leaders have said the votes across the state left up to them whether to take action, along with when to take the action and what exact action to take.

Christine Campbell, president of the state AFT arm, said there would be an announcement of “work action” Saturday, but she declined to say if it would be a strike.

When asked if any activity by the Legislature on Friday could affect Saturday’s announcement, she noted that the House had already decided not to convene Saturday and the Senate had adjourned until 6 p.m.

Dale Lee, president of the NEA’s state arm, said Friday afternoon that it hadn’t yet been decided what would be announced Saturday.

“We will be in constant discussions with our leadership teams before we make a decision tomorrow,” Lee said. “Not until after we see what happens at 6 o’clock.”

The Senate adjourned around 7 p.m. until Monday at 11 a.m., without acting on the pay raise bill. Lee still said, “Nothing’s a sure thing yet,” amid the chanting crowd outside the Senate chamber around 7 p.m.

Senate President Mitch Carmichael, R-Jackson, said the bill, which passed the Senate but was amended by the House to increase next year’s pay raise to 2 percent, is still before his Rules Committee and “we’re continuing to evaluate the fiscal implications of the changes the House made, as well as the reports on the financial condition of West Virginia.”

“In relation to the strike, we’ve done a lot, you know. We’ve put $30 million into PEIA to stabilize that fund,” Carmichael said. “To shut the doors of our schools because it’s not enough, when it’s all that the poorest people in America can afford, then that’s unfortunate.”

He said the recess Friday was due to needing to have committee meetings and acrimony on the floor, not due to trying to avoid the protesting school employees.

Josh Sword, president of the state arm of the AFL-CIO, a union umbrella organization of which the AFT is part, said national AFT Executive Vice President Mary Cathryn Ricker and NEA Vice President Becky Pringle will be at Saturday’s rally, alongside other union leaders, like Ken Hall, general secretary-treasurer of the Teamsters Union.

“We’ve been here 38 days now, and our most pressing issue is our educational system,” Prezioso said. “It’s totally underfunded. Our teachers are underfunded.”

“We have said, since Day One, that that is not enough,” Lee said of both plans. When pressed on whether lawmakers need to do better to avoid a statewide strike, he said, “They need to do better than that, to alleviate the tension.”

The House, however, suspended rules and passed legislation that would take $29 million from the state’s Rainy Day emergency funds to assure money to freeze PEIA health insurance premiums and benefits at current levels through the 2018-19 budget year (House Bill 4620).

“We are committed that there be no changes in PEIA benefits for the next year,” House Finance Chairman Eric Nelson, R-Kanawha, said, calling the funding a “one-time fix” to permit a task force to be assembled to come up with long-term solutions to issues with health care costs.

“It’s a hollow victory, if we don’t move forward on this and permanently fix PEIA, and not just put a Band-Aid on it,” said Delegate Brent Boggs, D-Braxton.

The bill passed 95-1, with Delegate Saira Blair, R-Berkeley, voting no. It now goes to the Senate.

The most influential projects of 2021 couldn't happen without project managers

5 simple ways to make a difference this holiday