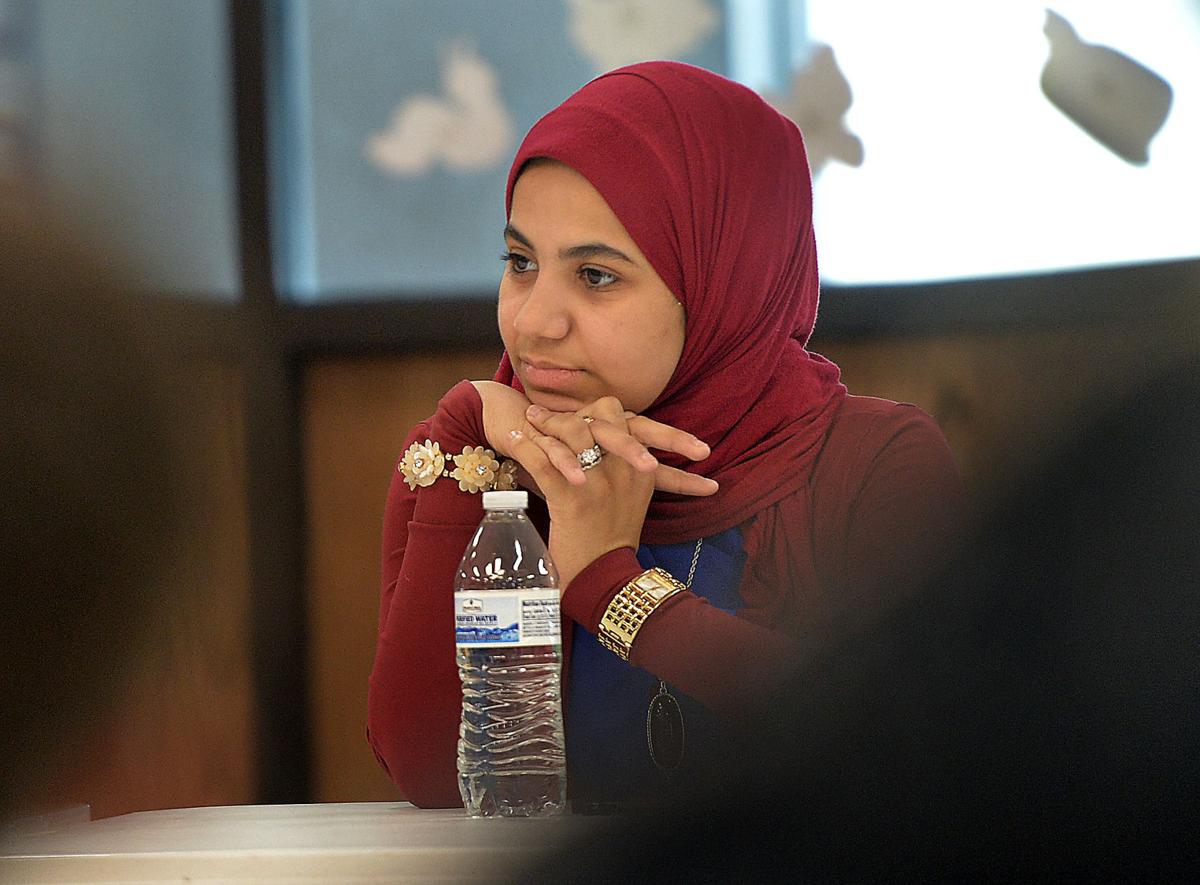 George Washington student Maryam Rawash takes part in a teen empowerment and anti-bullying workshop on Saturday at the Islamic Center in South Charleston.

Teens take part in an empowerment and anti-bullying workshop on Saturday at the Islamic Center in South Charleston.

George Washington student Maryam Rawash takes part in a teen empowerment and anti-bullying workshop on Saturday at the Islamic Center in South Charleston.

Teens take part in an empowerment and anti-bullying workshop on Saturday at the Islamic Center in South Charleston.

Just about every student at the Islamic Association of West Virginia on Saturday said they’ve heard the terrorist jokes in school.

And they’re not just coming from students.

“There’s a lot of racist teachers, and they don’t try to hide it from you,” said Maryam Rawash, a student at George Washington High School. “You will ask to do something, and they’ll be like, ‘No,’ and they can even say something, like make a racist comment toward you. If you say something back that’s disrespectful or anything, you can get in a lot of trouble for it, which has happened to a lot of students actually.”

About 25 Muslim middle school and high school students gathered at the community center to participate in a youth program hosted by the Islamic Networks Group to teach anti-bullying, leadership and public speaking techniques.

Rawash, who has worn a hijab — a covering some Muslim women choose to wear around their heads — since middle school, said she hears cracks from students and teachers alike. They ask her about recent terror attacks and ask her if she’s related to the suspect.

As a board member of the Muslim student association at her school, Rawash said the best course of action for her is to try to educate people on the realities of the Islamic faith and its similarities with other Abrahamic traditions, and to just be the adult in the room.

“You hear stuff that’s really ignorant, but you can’t be ignorant back, because, what’s the point of being petty,” she said. “You can’t really fix it. You just have to try to show them that you’re the bigger person, that you’re not what they think you are.”

Ibtesam Barazi, vice president of the local Islamic Association, said she worked to bring the ING program to the center to teach the kids how to respond to Islamaphobia and the bullying that can stem from it. She said while bullying can reach all students, because many Muslims are people of color and many of the women wear hijab, they can be easily identifiable, which can make them targets for bullies.

In the program itself, Ishaq Pathan, an ING youth manager, led the class in a light, though at times thorny conversation. They talked about how students treat other students of different diasporas in school, a lack of diversity in their communities, and the mean jokes said in the back of the school bus.

One room over, adults sat in on a seminar as well, geared to get them more involved in the community and to build a stronger presence of Muslims in the Charleston area.

Deena Dahshan is a senior at Marshall University who came home to volunteer for the program while her younger brothers take part in it.

She said when she was in high school, she never had this opportunity, and she’s glad to be a part of it now. She said conversations like the ones the program encourages leads to the students gaining more confidence in themselves and their faith.

Despite the issues, Barazi said she loves the Charleston and the West Virginia communities, both of which have been largely accepting.

Similarly, Dahshan said at the end of the day, it’s building bridges between cultures that will make all the difference.

“I kind of think that people are just scared of what they don’t know,” she said. “If they keep themselves isolated, they’ll just continue being scared of Muslims because they think that they have some preconceived ideas, whereas if they get to know a Muslim, have a conversation, or even see what the inside of a Mosque looks like, they might be like, ‘Oh, OK, that’s what they do,’ and they might be not as scared.”