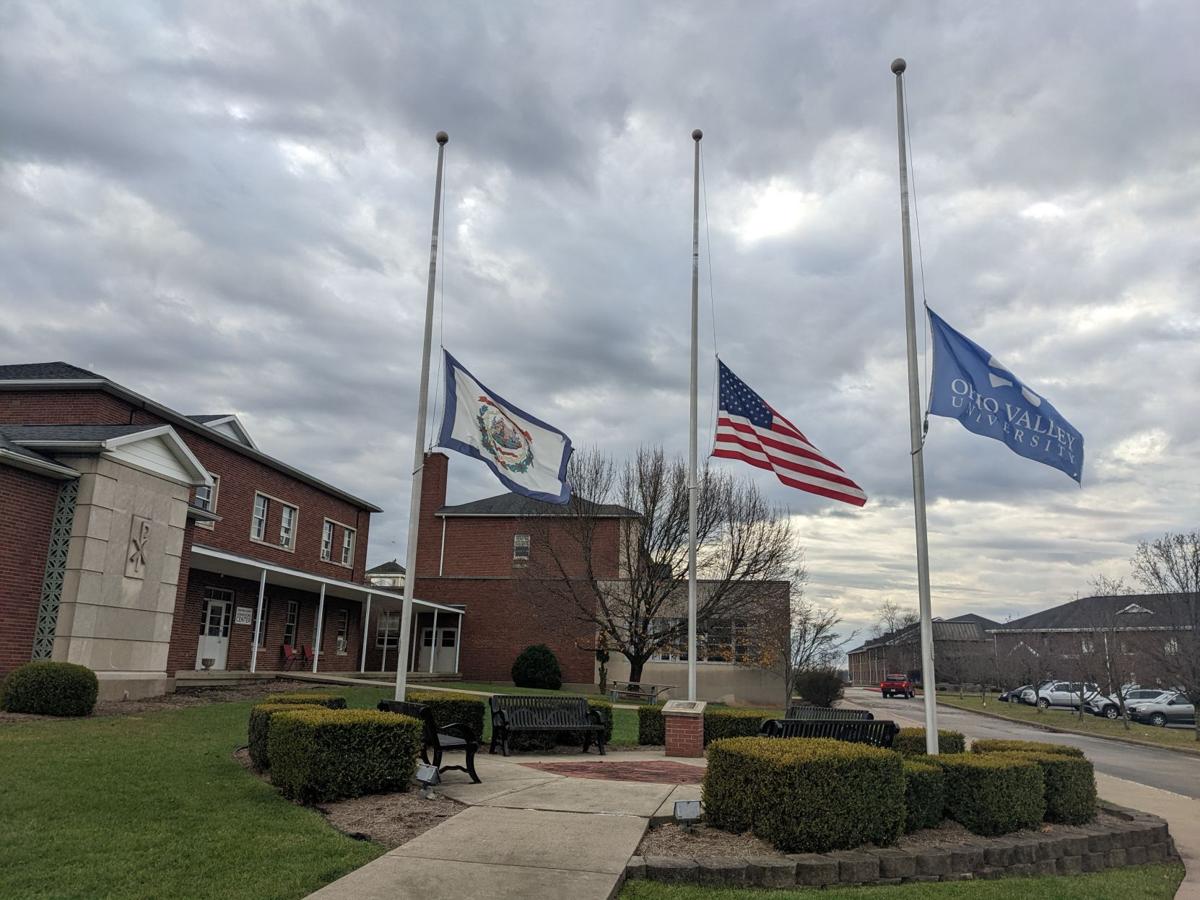 The West Virginia, American and Ohio Valley University flags were at half-staff last week on the school’s campus in Vienna. The university’s president says the school is only offering classes in the spring to seniors and graduate students, so other students are having to find new colleges. 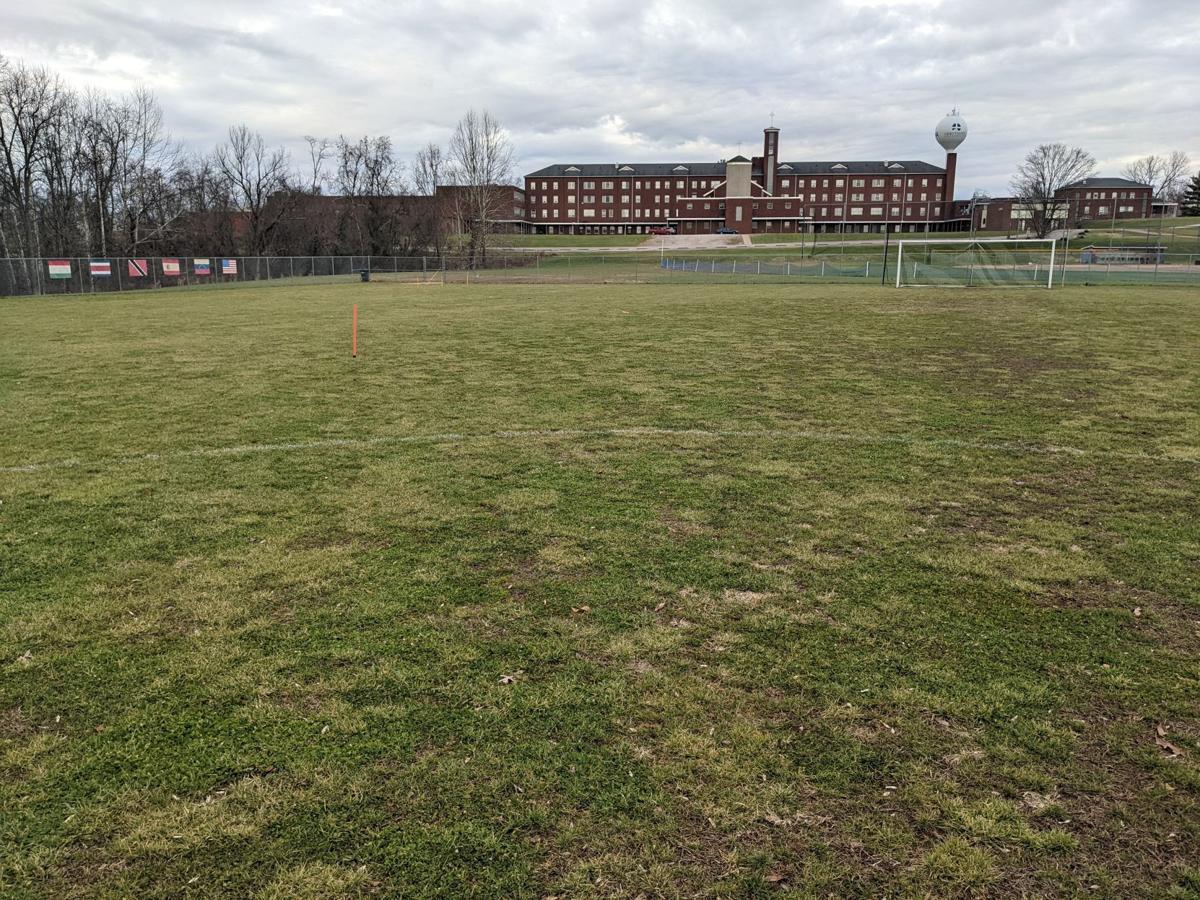 The Ohio Valley women’s soccer team went undefeated in its conference this fall, the school’s first time in the National Association of Intercollegiate Athletics. 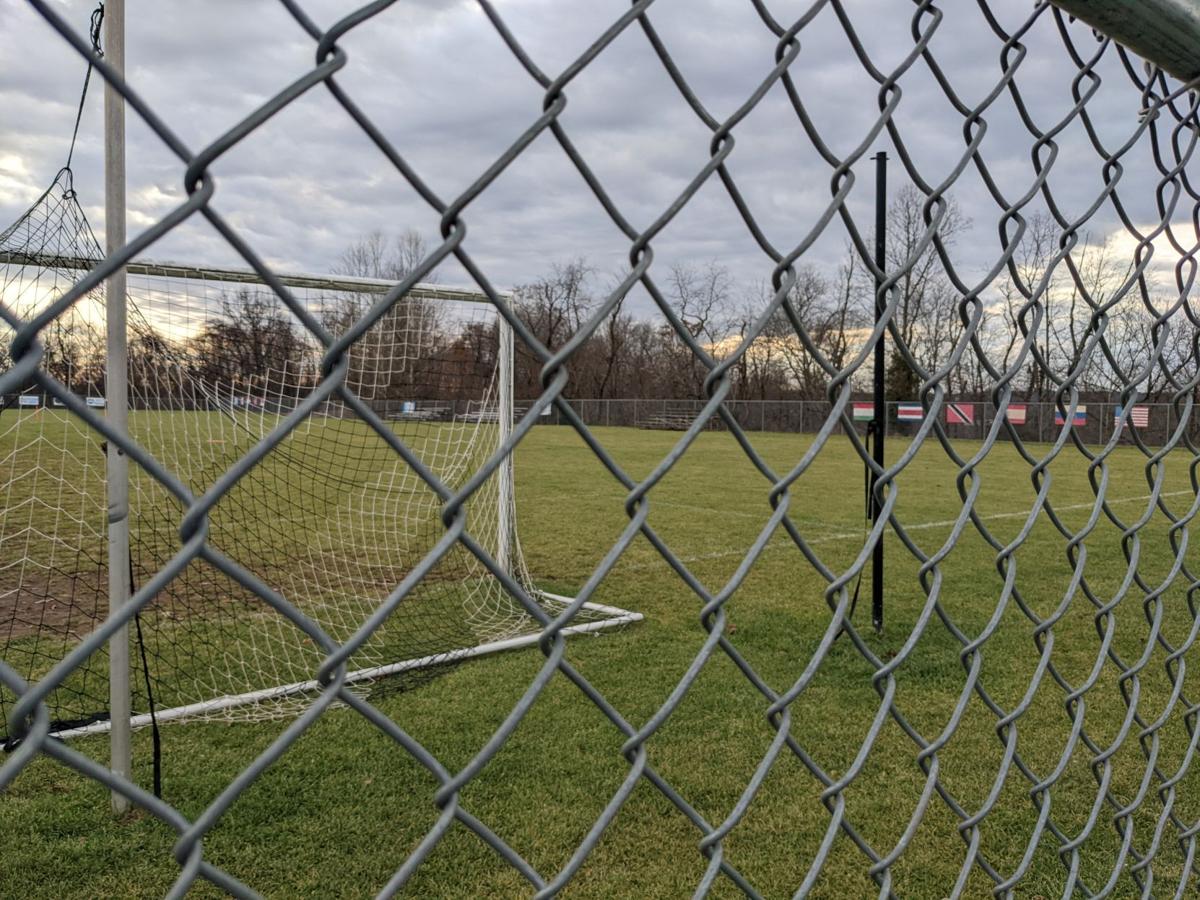 Ohio Valley’s women’s soccer players, alongside other athletes, are having to find new colleges. 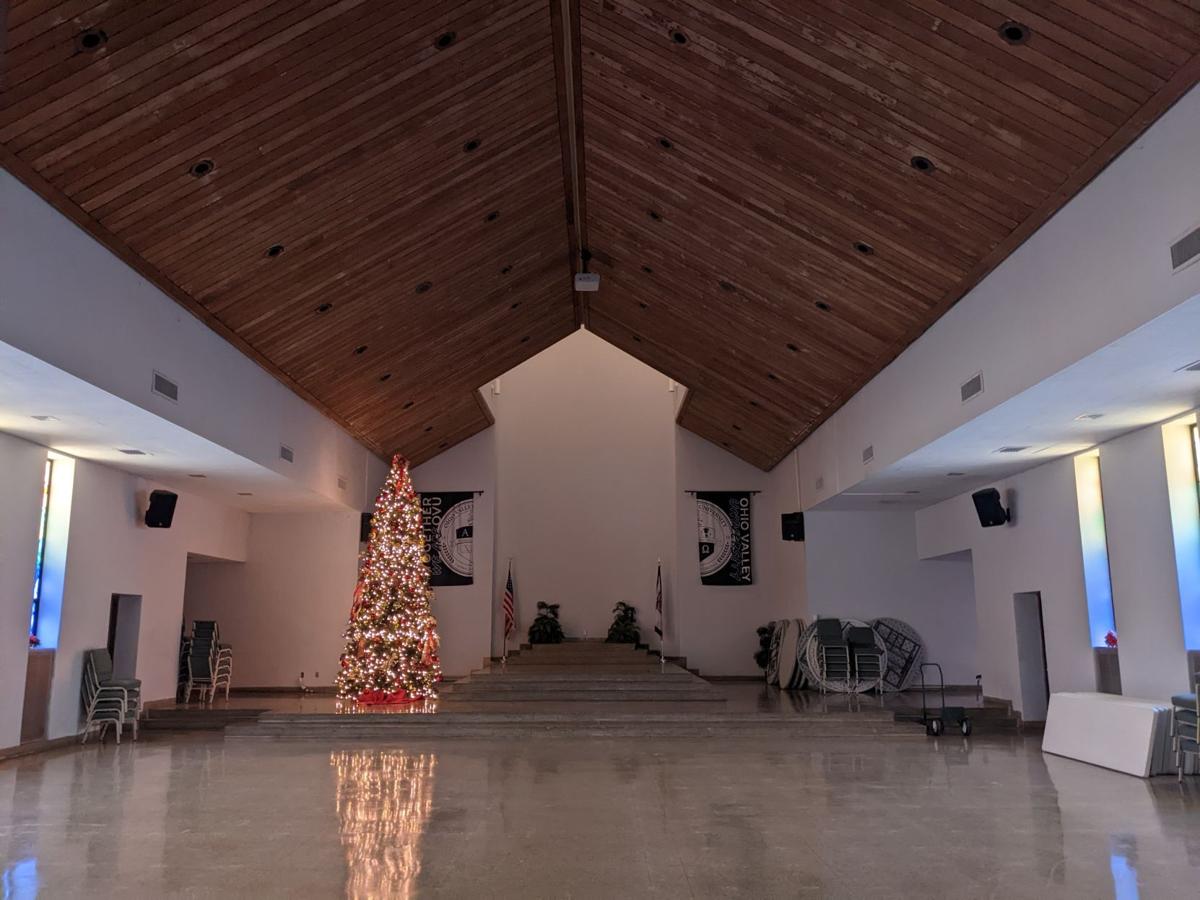 Ohio Valley’s chapel is at the heart of the private Christian school’s campus.

The West Virginia, American and Ohio Valley University flags were at half-staff last week on the school’s campus in Vienna. The university’s president says the school is only offering classes in the spring to seniors and graduate students, so other students are having to find new colleges.

The Ohio Valley women’s soccer team went undefeated in its conference this fall, the school’s first time in the National Association of Intercollegiate Athletics.

Ohio Valley’s women’s soccer players, alongside other athletes, are having to find new colleges.

Ohio Valley’s chapel is at the heart of the private Christian school’s campus.

But this also ended up being Ohio Valley’s last academic year in existence.

Early this month, a West Virginia agency scheduled a vote on closing the financially beleaguered Wood County school. It hadn’t been paying employees or providing students transcripts this semester.

The small Christian university didn’t wait to be shut down — it decided to close itself. President Michael Ross said Ohio Valley only plans to finish teaching seniors and two graduate students in the spring. He said transcripts are now being provided to the others who need to transfer.

So, last week, junior soccer player Ylenia Cirrincione was moving out of the dorms for the last time.

Cirrincione, 21, from Barcelona, Spain, said Oklahoma Christian University had agreed to honor her academic and athletic scholarship. The center back plans to go there — she said there isn’t much choice.

Other colleges, she said, can’t afford her scholarship and “are not looking for students or athletes in the middle of the year.”

“I have just a month to decide my future,” she said. “Ahh, gosh. In the middle of the year.”

“I can’t understand what happened, and why now?” she said. “It could’ve happened in May and we’d have the whole spring to find something else for fall. [If] it was at the beginning you could negotiate the scholarship and everything. No, in the middle of the year. I mean, come on. They’re playing with us, honestly.”

Ross, who didn’t provide the Gazette-Mail an interview this week or last, told The Christian Chronicle that 65-70% of the about 175 students are athletes.

Cirrincione was returning to Spain for the holidays, a break before an uncertain future. Of her 16-member team, only three were Americans.

“I need my parents right now,” she said. “I’m not used to missing them but, trust me, I miss them right now, I miss them, I need to make a decision, important decisions and I need them.”

Unlike women’s soccer, some seasons weren’t over when the closure was announced. Scheduled games are now canceled, but not all players had found or picked somewhere else to go as of last week.

“Until I can go to another college, I cannot move, because I don’t have somewhere else,” she said.

Garcia said she was talking to two schools last week, but had limited time to choose among options.

This week, she said she had signed with Georgia’s Life University and thinks she can start playing there as soon as she gets her transcript. She said she’s moved from the dorm, to a friend’s house, to her boyfriend’s, ahead of moving to her new college.

Ken Martin, 22, a junior from Michigan, just transferred from an Alabama community college to Ohio Valley this semester. He was on the Ohio Valley men’s basketball team.

“My cousin played here a few years back,” Martin said. “So, when I heard that they were recruiting me, it was basically an easy decision, especially after talking to my family, to just basically come here, follow in his footsteps. Because he told me how good of a school this was, how there were great people here. So, I wanted to come and be a part of the family for myself.”

But, last week, he was wheeling a shopping cart with ramen noodles, bagged mini-doughnuts and other food from the emptying dorms to a picnic table in a commons area. Anyone was welcome to take the abandoned food.

Martin said he has a couple of options to continue playing and working toward his degree. Despite what was happening, he said Ohio Valley “was everything I expected it to be.”

“I definitely enjoyed my time here, I really did,” he said.

Titus Kosgei, 24, was pushing a laden grocery cart toward the already stuffed trunk of his Ford Taurus.

The junior said he wasn’t going back to Eldoret, Kenya, over the holidays. He said he would stay with friends in North Carolina before likely heading to Oklahoma Christian University, which has offered to honor his athletic scholarship.

He ran cross country and track nearly year-round, he said, but the closure canceled that.

But he said Ohio Valley had made the transition easy. He called the university “a good family.”

“It’s so bad, you know?” he said. “I just went to the chapel that we normally used to attend and I feel so bad because this has been my place since I came here, and when I see it shutting down, it’s so bad actually. It’s so bad.”

The sky was overcast last Wednesday, when Kosgei and the others were moving out. The empty chapel’s only light came from its Christmas tree and the little filtering in from the stained glass windows.

A poster saying “Welcome to the NAIA,” the National Association of Intercollegiate Athletics, hung on the wall just outside the chapel. Someone informed men’s basketball coach and dorm supervisor Mike Snell that the cafeteria would soon close.

Some Ohio Valley athletes never got to play their regular season this academic year.

Juan Lopez, 22, of Puerto Rico, said last week he didn’t know whether he would take the offer seniors have to finish out at Ohio Valley in the spring.

“My plans were to play baseball and, unfortunately, that’s not going to happen here,” he said.

He stood in the dorm common room, awaiting a ride from campus to an airport.

He said he was an RA — a resident assistant or adviser.

“So they paid for my dorms, and now I don’t — like I don’t know if this is going to be functional,” he said.

Other schools may honor his athletic scholarship, Lopez said, but not necessarily let him play.

“It’s really heartbreaking,” he said. “I gave three years of my life to this place and I don’t regret it, but it is heartbreaking for me and the people that just have to go somewhere else and find where to go.”

He recalled how international students connected at the small school.

“You get to meet them and love them and it doesn’t matter the situations or the facilities,” he said. “We didn’t care about that, we just care about what we gave for each other and all of that.”

Golfer Isaac Bowen, a freshman, never got to play any regular season at the college — just preseason.

“My first college experience, and then I’m here for one semester and then the whole, entire thing just shuts down,” he said.

He’s from relatively nearby, Huntington, and said West Virginia State University has offered him an athletic scholarship.

“It sucks a lot because you’ve gotta deal with moving everything back,” Bowen said. “All the friends I’ve made here are friends that I’ve never had before, and we’re all from different states, so leaving a bunch of people behind. It’s going to be really rough not to see them again. The teammates I’ve had, they’ve helped me a lot to increase my golf, so I’m going to miss them, too.”

The two Ohioans started dating at the school. As others moved out, they sat together in the common room, watching “Friends.”

Kruger said they’re “trying to find a college that’s gonna honor our scholarships, have our degree and, I don’t know, just something that we can go to together — [it’s] just, I guess, a lot harder when it comes down to crunch time because we don’t have a whole lot of time.”

“Even though it’s only been a semester,” Kruger added.

Cirrincione, the soccer player, said she was disappointed with Ohio Valley’s size and facilities when she transferred last year from a Kentucky school.

Practices last year were at Parkersburg High and “home” games were roughly an hour away, in Charleston. Ohio Valley’s field isn’t turfed, and COVID-19 had moved last year’s season to the spring.

Ohio Valley used its field this fall, but because 11 team members are on the field simultaneously and there were only 16 on Cirrincione’s team, she said she was surprised there weren’t more injuries considering the field’s condition and the required playing time.

She said she was also disappointed the school left NCAA Division II to join the National Association of Intercollegiate Athletics.

But the increased play time was a big departure from Kentucky, where she played perhaps no more than 10 minutes total, she said. And the former forward finally found her position.

“The coach [Eric Belcher] just told me, ‘I’m going to try you as a center back,’” Cirrincione said. “He did. And we won everything.”

“Here, in OVU, I found back my patience for soccer,” she said.

In a turnabout, she said she is now positively considering playing soccer after college. But first she must actually finish college — somewhere else.