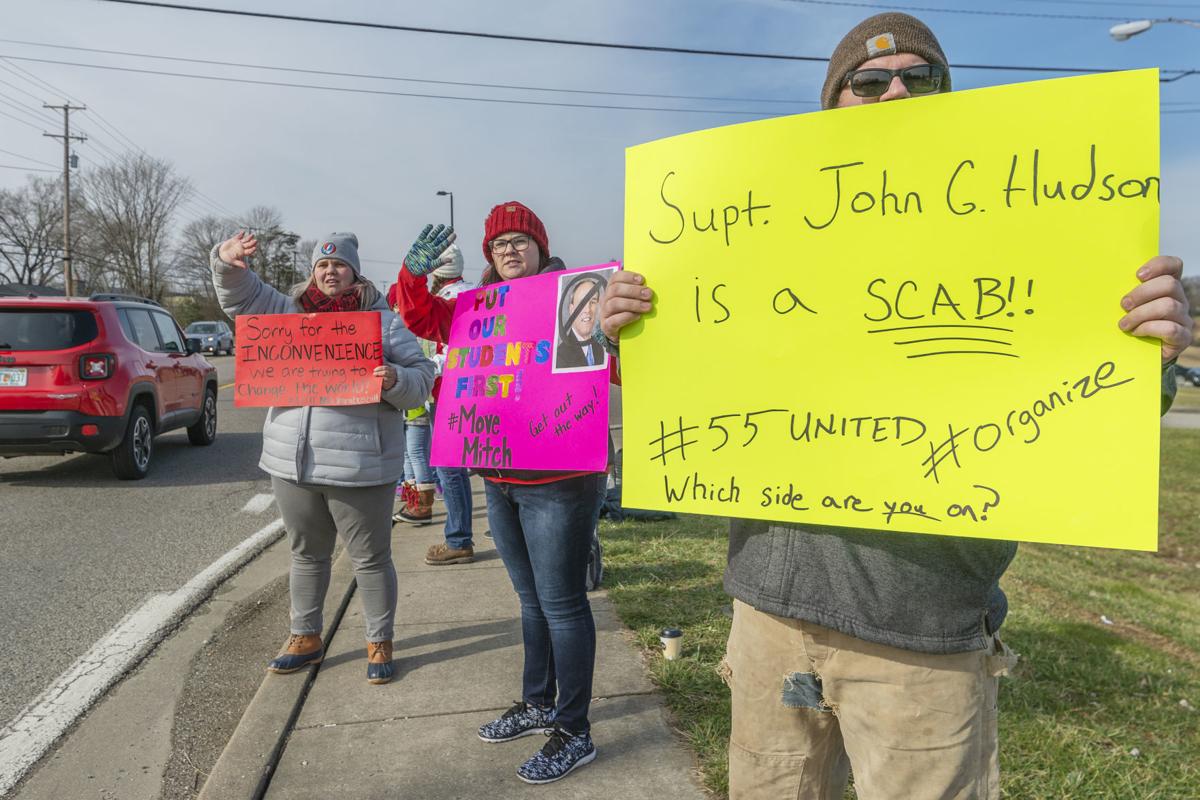 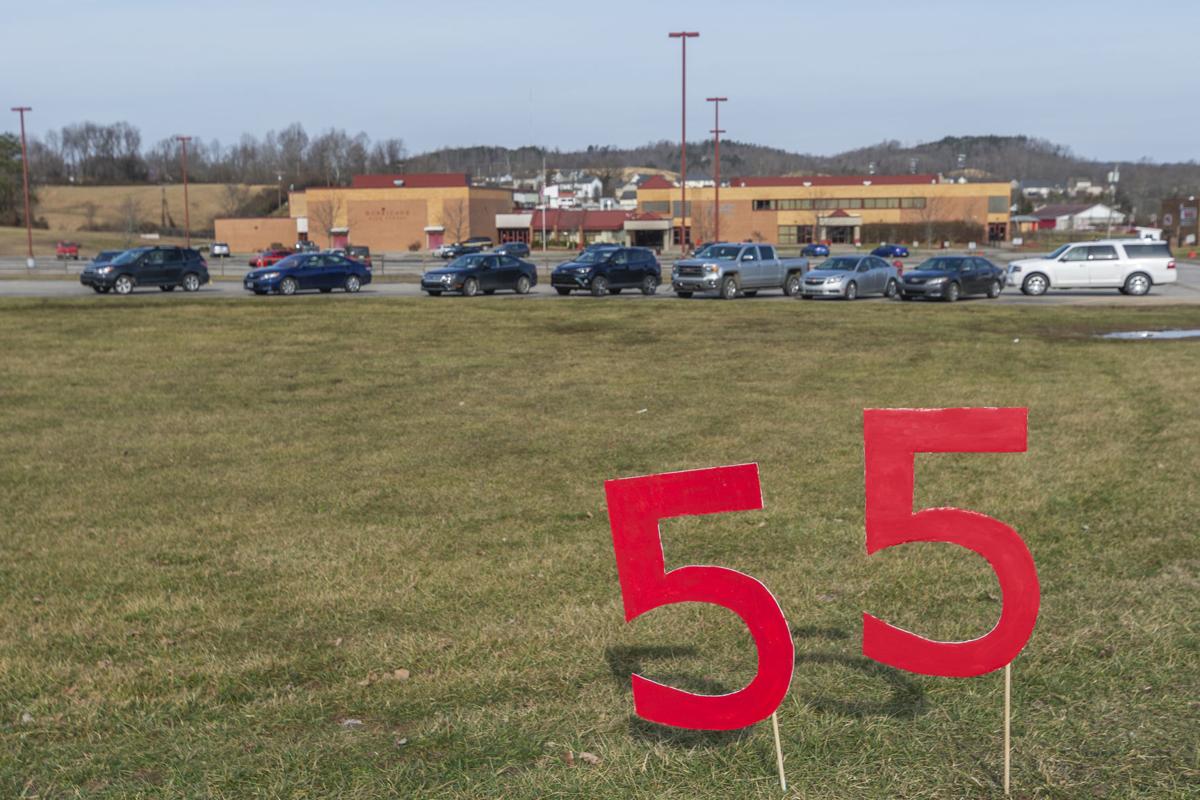 A 55 United sign stands outside Hurricane High School in Putnam County during a statewide strike by teachers and school workers on Tuesday. While West Virginia’s other 54 counties decided to close schools, Putnam County kept its schools open, even while few students attended classes. 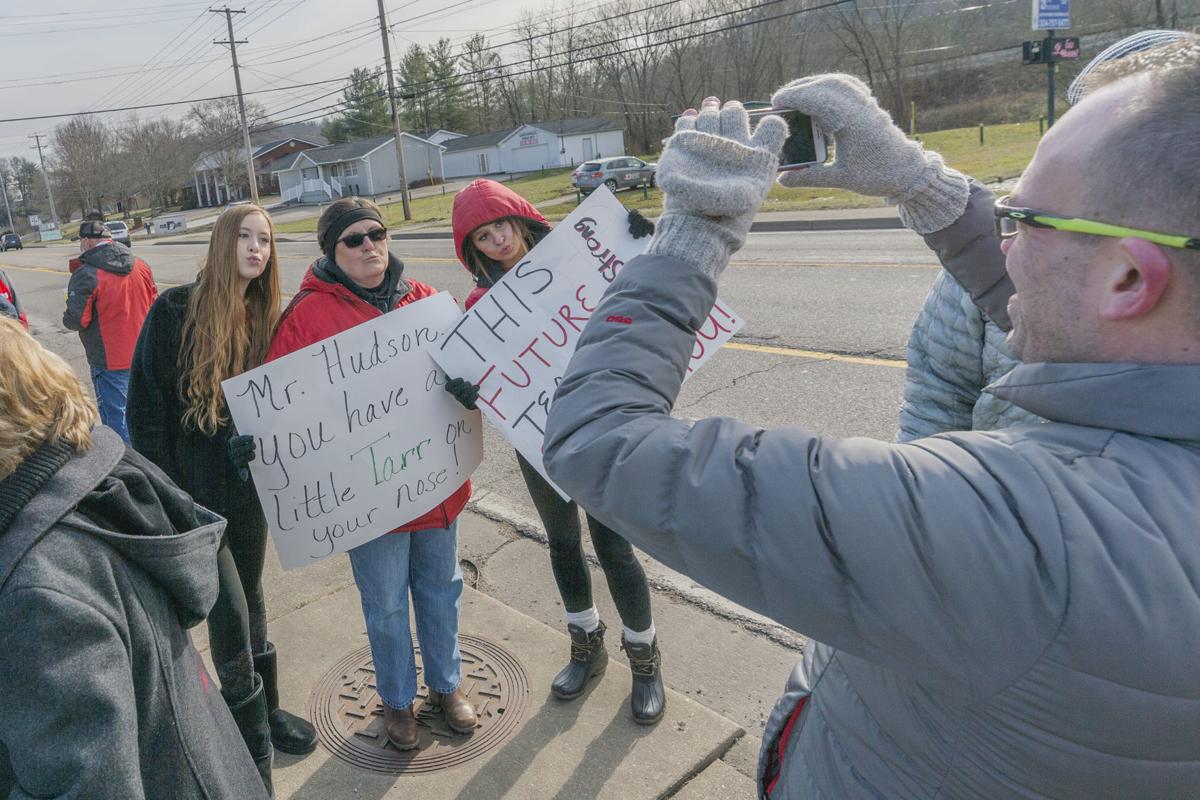 A 55 United sign stands outside Hurricane High School in Putnam County during a statewide strike by teachers and school workers on Tuesday. While West Virginia’s other 54 counties decided to close schools, Putnam County kept its schools open, even while few students attended classes.

WINFIELD — While 54 of West Virginia’s 55 counties opted to cancel schools during a statewide strike of teachers and school workers on Tuesday, Putnam County held out.

Most of the county’s teachers and school workers, though, picketed outside their schools against the controversial education omnibus bill (Senate Bill 451) — which was voted down in the House of Delegates early Tuesday afternoon — and said they wanted to send a message to county administrators that they would remain “55 united” — officially or not.

Bus drivers were on strike Tuesday, so no school buses ran. Most Putnam schools saw only a handful of students in class, and picketing teachers said those numbers dropped throughout the morning as parents returned to pick up their children.

“We’re kind of emotional this year — we feel we’re out here without the county’s support, but we’re here for our kids,” said Frances Tolley, a chemistry and science teacher at Hurricane High School. “In our school, if charter schools are brought in with a lottery system, we think a lot of our kids aren’t going to have a place they need to have. This impacts all of them.”

In a statement released Monday evening, Putnam Schools Superintendent John Hudson said that schools in the county would remain open so students could “continue to have the opportunity to learn in a safe and secure environment.”

“It’s unfortunate that circumstances beyond our local control have resulted in a strike,” the statement continues. “However, we remain hopeful that the legislative process will result in what is best for school employees and students.”

Hudson updated that statement Tuesday afternoon to say the decision to keep Putnam schools open “was in no way meant to disrespect our Putnam County School employees as each employee plays an integral part in the success of our district.”

School system spokeswoman Micah Osborne said students who did attend classes on Tuesday were continuing “day-to-day” activities. She said 25 percent of staff and 10 percent of students were in school Tuesday. Teachers picketing outside Putnam schools on Tuesday morning said the numbers of students inside were much lower.

Putnam school board member Sam Sentelle, a former schools superintendent in Putnam and Logan counties, said he was disappointed to see Putnam schools remain open. He didn’t know who made that decision, but said it was not through a formal motion by the board.

“I was really embarrassed that Putnam County did not follow that example [of the 54 other counties],” Sentelle said. “I wanted to — I felt the bill was ill-fated to begin with and I didn’t like it. ... I felt the people behind this legislation really weren’t familiar with our system, with how things work here.”

Sentelle said the bill’s defeat is in the best interest of those in Putnam County, but also the rest of the state. He said he felt a majority of those on the Putnam school board “did not want to come out against” the bill, and that’s what Tuesday’s decision to leave schools open was really about.”

Putnam Board of Education President Robert Cunningham and school board member Calvin Damron did not respond to requests for comment.

On Monday evening, the Senate voted to add more freedom for charter schools and education savings accounts back into the House-approved version of the bill, leading state union leaders to call on teachers and school service personnel from all 55 counties to strike, an action they authorized “overwhelmingly” two weeks ago.

“I just feel like this bill is not the way — there’s a possible way to reform education here, and West Virginia teachers are also looking for reform, but we don’t want this to be the way it’s done,” said Allison LeMaster, a Title I teacher at Rock Branch Elementary School in Nitro. “A lot of us were fine watching the House [change the bill]. They were looking at compromises. What happened last night and this weekend, though, we can’t stand for it.”

Through public hearings, social media postings and calls to legislators, teachers and school employees across the state have stood adamantly against the bill since its introduction, despite the pay raise and other benefits they could receive from it.

“There’s more to us than that,” said Berry Phillips, a math teacher at Poca High School. “A pay raise — it’s nice, but that’s not what we’re here for. We’re here to make sure our students’ best interests are being served, and having charter schools here is not going to do that. It’s going to hurt them, it is.”

At Poca High, English teacher Ashley Ellison said about four students out of the school’s roughly 550 showed up for classes, along with just two teachers.

“We felt very disrespected and disappointed [Putnam County did not call off schools],” Ellison said. “It was a big letdown to see 54 of 55 counties supported, but not us.”

“I was heartbroken and, truly, confused,” said Kayla Good, a language arts teacher at Poca Middle School. “I wasn’t even expecting [a strike], but I definitely didn’t expect not to be supported.”

Christine Nichols, a speech pathologist at Winfield Elementary School, said she attended the county’s school board meeting the night before, and while she was pleased to see everyone have a chance to speak, it was a shock to watch the night progress and Putnam be left as the only school not colored in red on the state Department of Education’s school closure map. When the first bell rang for class to begin Tuesday morning, only 11 students were at the school, and no teachers.

“In the past, we’ve felt very supported by our board, and aren’t sure why the sudden change in priorities,” Nichols said.

For Nichols, the most upsetting thing about the county school board’s decision to keep schools open was the lack of an explanation from the board’s leaders. Picket lines at several of the county’s schools featured signs admonishing Hudson for the move.

“This behind me — this isn’t just a school; it’s a food pantry, a clothes closet, a crisis clinic, a triage point for behavioral disorders,” Nichols said. “That’s true for all the schools around here, and we need it to be clear that we aren’t standing here today for us — there’s a 5 percent raise in there, but we don’t even care — we’re standing here for the students we see every day who deserve more than what [the state Senate] is trying to give them.”

Caity Coyne is a corps member with Report for America, an initiative of The GroundTruth Project.