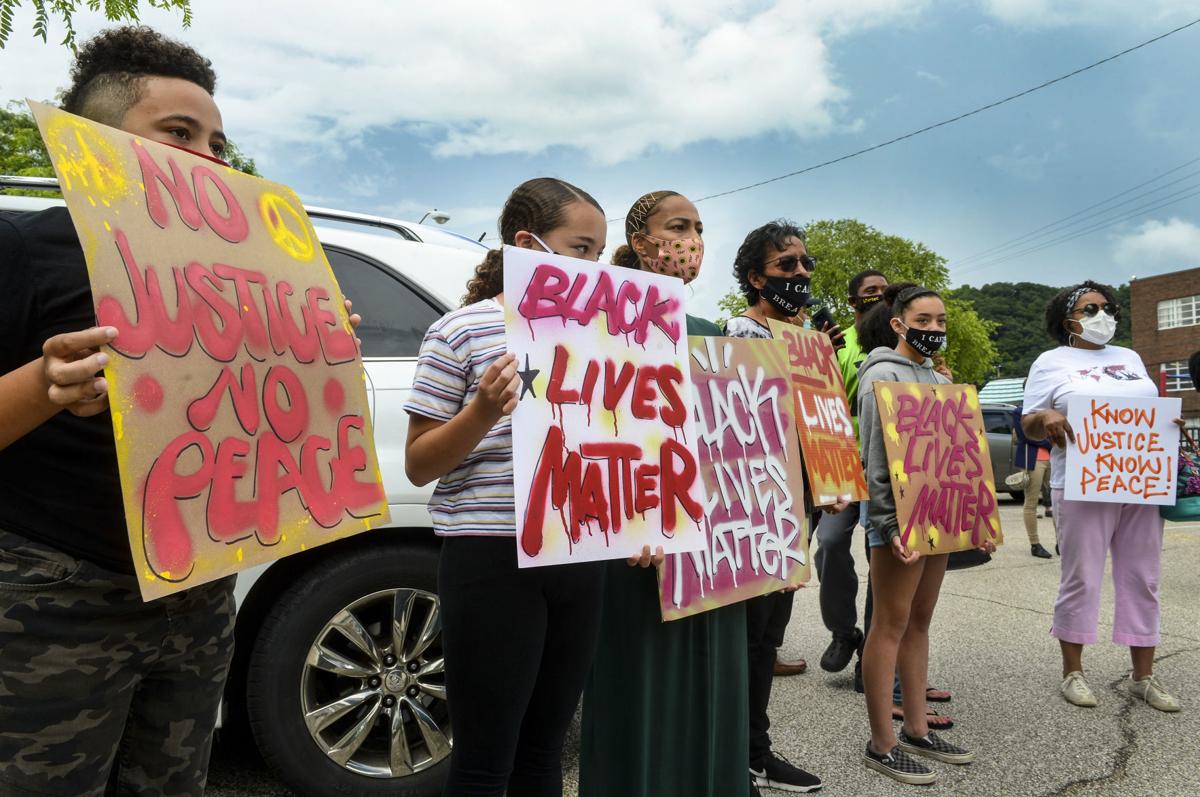 Demonstrators stand in the parking lot across from the Kanawha County Board of Education building, in Charleston, during a peaceful protest against the name of Stonewall Jackson Middle School. A march is planned for Saturday to protest the name of the West Side school. 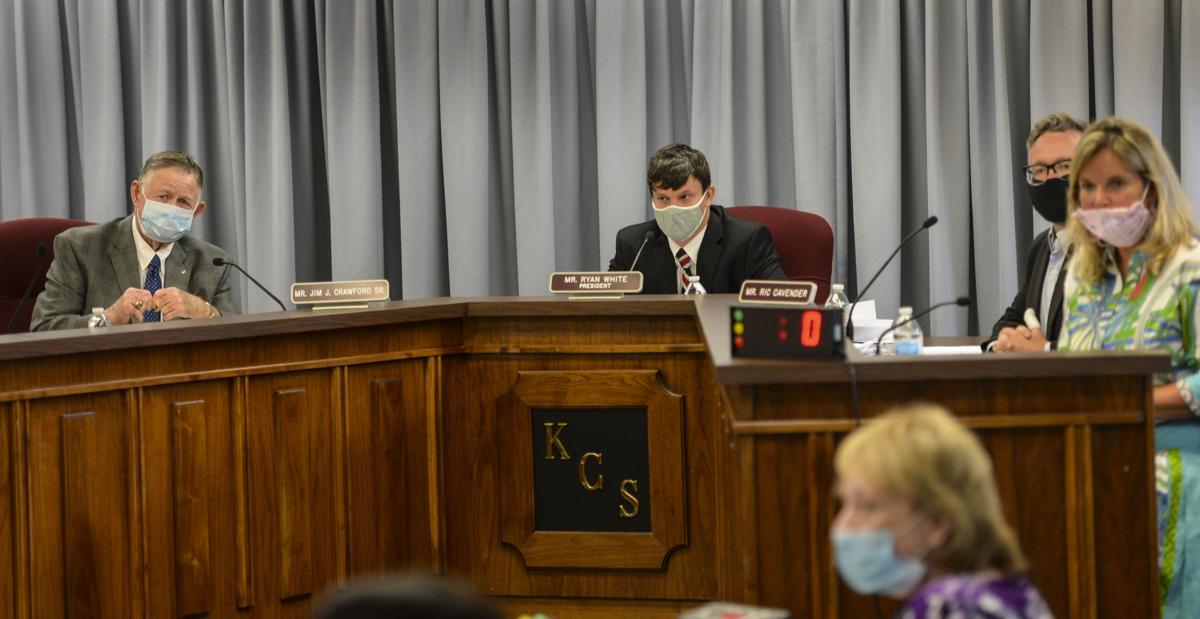 Kanawha County school board members listen to a speaker at Thursday night’s meeting.

Demonstrators stand in the parking lot across from the Kanawha County Board of Education building, in Charleston, during a peaceful protest against the name of Stonewall Jackson Middle School. A march is planned for Saturday to protest the name of the West Side school.

Kanawha County school board members listen to a speaker at Thursday night’s meeting.

Supporters of changing the name of Stonewall Jackson Middle School are marching on the Kanawha County Board of Education this Saturday.

The school was built on a former plantation and originally restricted to whites only. But today, it’s 42% African American — the highest proportion among public middle schools in West Virginia, according to the state Department of Education.

Unlike in 2015, when the all-white Kanawha board rejected a call from a black local professor and an online petition to change the name, this push seems to have more backing from the school itself, from residents of Charleston’s West Side and from the national momentum against racism.

“No one in their right mind would expect a Jewish child to go to Hitler High School or Eichmann Elementary or Mengele Middle School,” said Bishop Wayne Crozier, who is black. “So it is up to us to take the forefront and say, ‘We’re not going to take it.’ ”

In a church Monday at the West Side’s Five Corners, Crozier told residents he wanted to be able to look back at the name change as a tangible victory gleaned from this historic national moment.

Crozier said it’s an “absolute atrocity” that “we have to send our children to a school that, No. 1, honors a slaveholder, but, No. 2, honors a man who became famous for trying to keep all of our ancestors enslaved.”

Most of the audience Monday stood in support of renaming the school after Booker T. Washington, who was born a slave, spent much of his childhood in Malden, fought hard to become educated and became an influential intellectual and founder of Tuskegee University.

The second most-popular choice was Katherine Johnson, the West Virginia-born black mathematician whose calculations successfully accomplished the United States’ first spaceflight, its first orbit of Earth and humanity’s first voyage to the moon. Only one person, Pastor Robert Haley, picked her as No. 1.

According to Jackson biographer James I. Robertson Jr., Confederate Gen. Thomas J. “Stonewall” Jackson was born in Clarksburg in 1824, when it was still part of Virginia. He became famous for his victories against the Union army in the Civil War, which saw hundreds of thousands of Americans killed and was fought largely by the Confederacy to preserve slavery.

Crozier said the march will start at 6 p.m. Saturday at his own church, Abundant Life Ministries, 1534 Washington St. E. Attendees will march the third of a mile to the school board’s central office on Elizabeth Street.

The board has scheduled a discussion, and perhaps a vote, on the issue for July 6. About 50 people showed up at the board’s meeting Thursday night holding signs stating “Change the Name” and “Black Lives Matter.”

Knox handed petitions supporting a name change to board members Thursday. He said they were signed by more than 150 families of current and future students of the school. He said his own biracial granddaughter will attend the school in the future.

“It’s more to me than just a name change,” Knox said. “It’s going to be changing her life as she grows up.”

As for the school board today, which is still all white, it has two members, Becky Jordon and Jim Crawford, who have historically expressed opposition to the change. Jordon graduated from Stonewall in 1979, back when it was a high school, and Crawford’s wife graduated from it.

Jordon expressed concern Thursday that changing the name would fuel calls to change names of other Kanawha schools, such as those named after George Washington or Andrew Jackson, or other buildings named after the late Sen. Robert C. Byrd, D-W.Va.

“Who’s going to pay for all of those uniforms, the school board?” she said of Stonewall. “No, we don’t have that kind of money.”

She said she’ll listen to people on the issue, but complained about those who “run their mouths” instead of otherwise supporting the children in the high-poverty school. She noted they need clothing, food and other support.

“I lived over on the West Side for 32 years,” she said. “I don’t know of anybody who walked in that building and [thought] ‘Oh the name of this school is discriminating.’ ”

Two other board members, Ryan White and Ric Cavender, have said they’ll back what the community wants. They defined the community as the school’s students, future students, parents and West Side residents, while Cavender also added employees and the Local School Improvement Council.

Cavender said, “It needs to come from that school and from that community.”

Although Cavender said he personally has concerns with the name — he also noted a school mural of “that Confederate general kind of looking over all these kids — there’s a lot of symbolism there I’m not comfortable with.” He said he’d like to hear input before moving forward.

“I have been contacted a lot by community members on both sides,” she said.

She said she wants to continue to hear from students, future students, parents, teachers, alumni and community members.

“I’m going to lean toward the experts,” she said, “and that’s the students and the community that will attend Stonewall Middle itself.”

Among the many other effects of the national protests and revolts in the wake of George Floyd’s death, officials are removing statues and other memorials of Confederates from public spaces. Ones that remain have been denounced and defaced.

Education Week reported that, as of this month, Stonewall is among at least 174 schools in 16 states that “are named for men with ties to the Confederacy.” The national publication said a dozen schools specifically honor Jackson.

In West Virginia, Wednesday saw the Harrison County Commission decline to remove the statue of Stonewall Jackson on horseback that stands in front of the county courthouse there.

Bethany College also announced the same day that it would remove from a building the name of Sen. Byrd, who once was in the Ku Klux Klan and filibustered the 1964 Civil Rights Act, before apologizing and working to atone for his racism later in life.

Stonewall Jackson rose from a rough childhood to graduate from the U.S. Military Academy at West Point, fight in the Mexican-American War and teach at the Virginia Military Institute, according to Robertson.

He joined the Confederacy after Virginia’s secession from the United States in 1861.

“Jackson repeatedly sought permission to lead a force into northwest Virginia to save his home area from being kept in the Union by federal invaders,” Robertson wrote in an entry on Jackson in the West Virginia Encyclopedia, a project of the West Virginia Humanities Council.

Jackson died from friendly fire that resulted in pneumonia on May 10, 1863, about a month before West Virginia officially became a state after seceding from Virginia.

Students, parents and others marched on the Kanawha County School Board Saturday evening calling for Stonewall Jackson Middle School to be renamed.