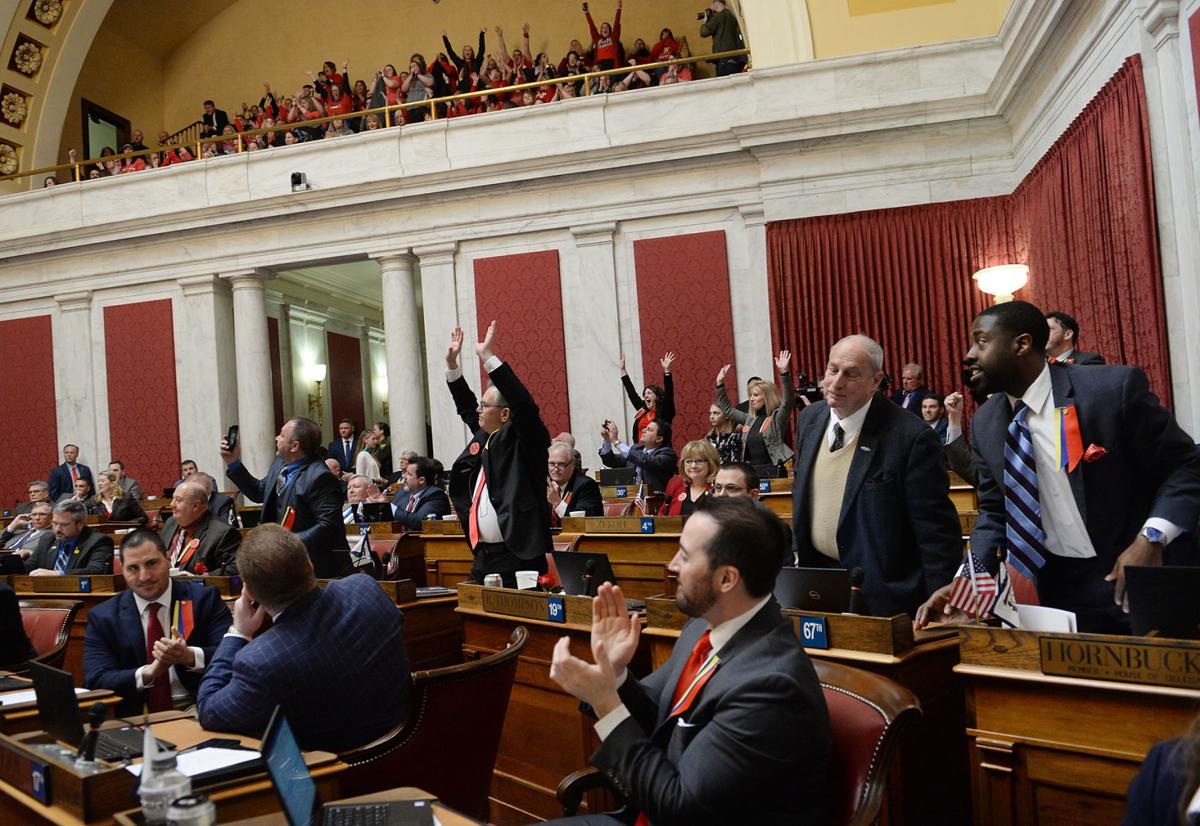 Members of the House of Delegates, along with striking teachers and school workers in the House chamber, react after delegates voted to kill the controversial education omnibus bill by a 53-45 margin. Twelve Republicans joined all House Democrats to kill the bill. 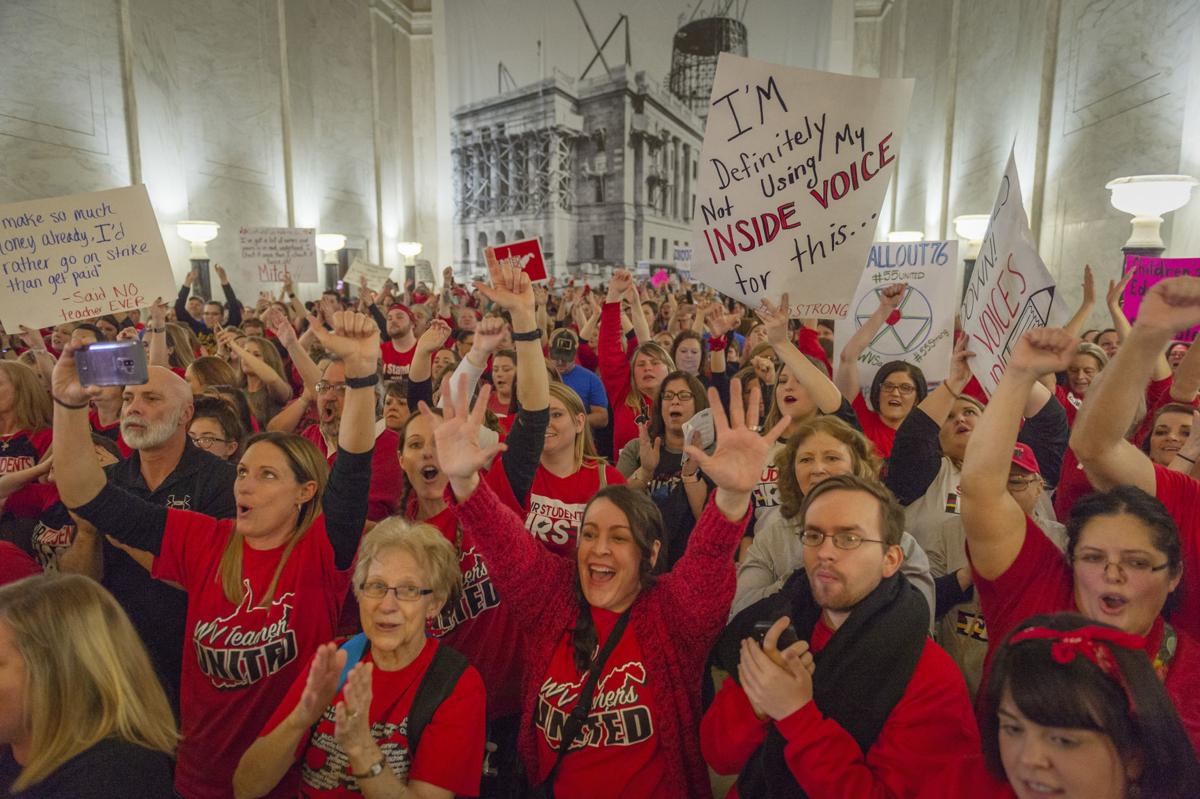 Striking teachers and school workers celebrate outside the House of Delegates chamber after the House after delegates killed the controversial education omnibus bill on Tuesday afternoon. 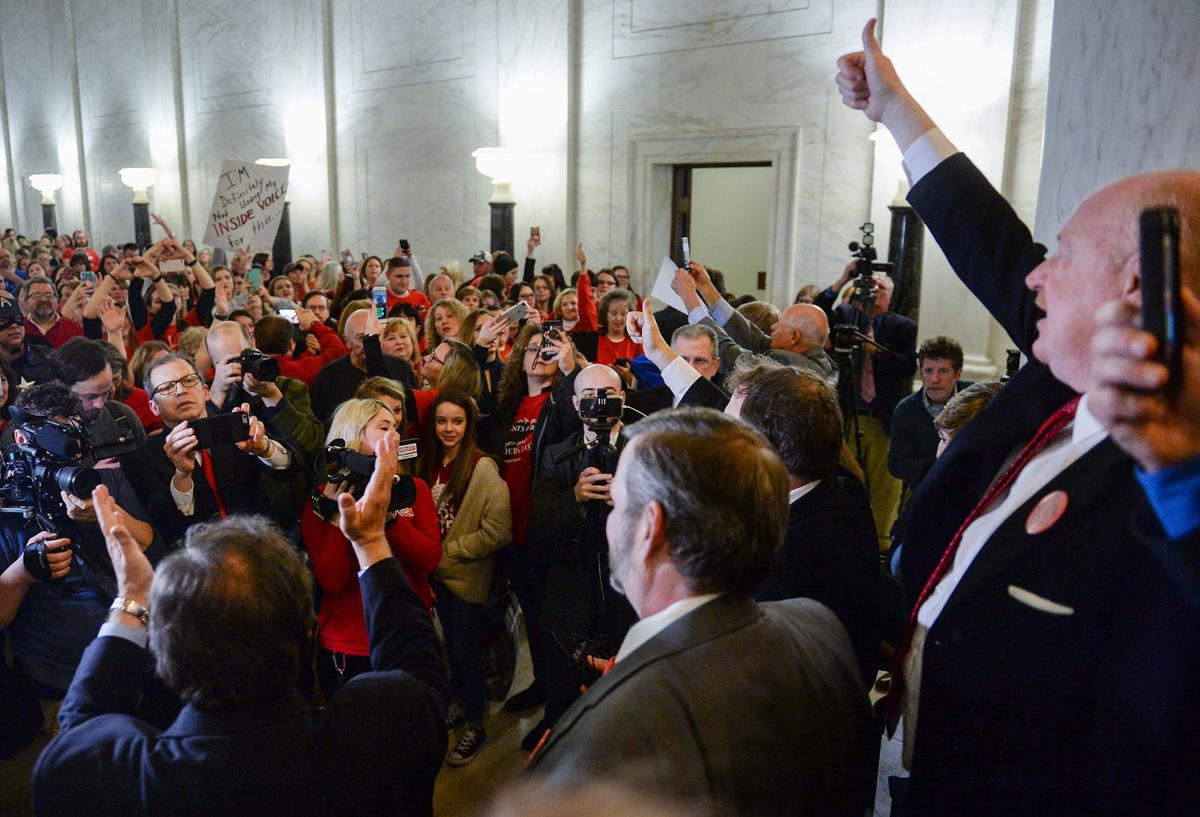 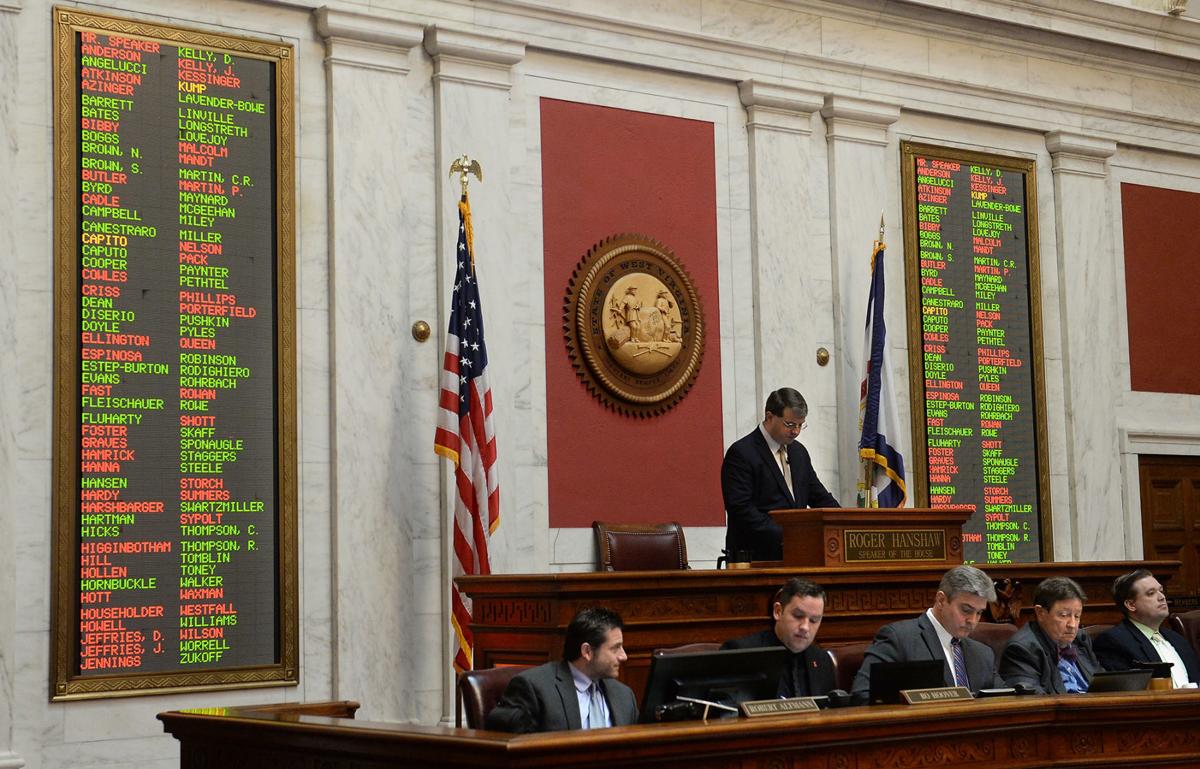 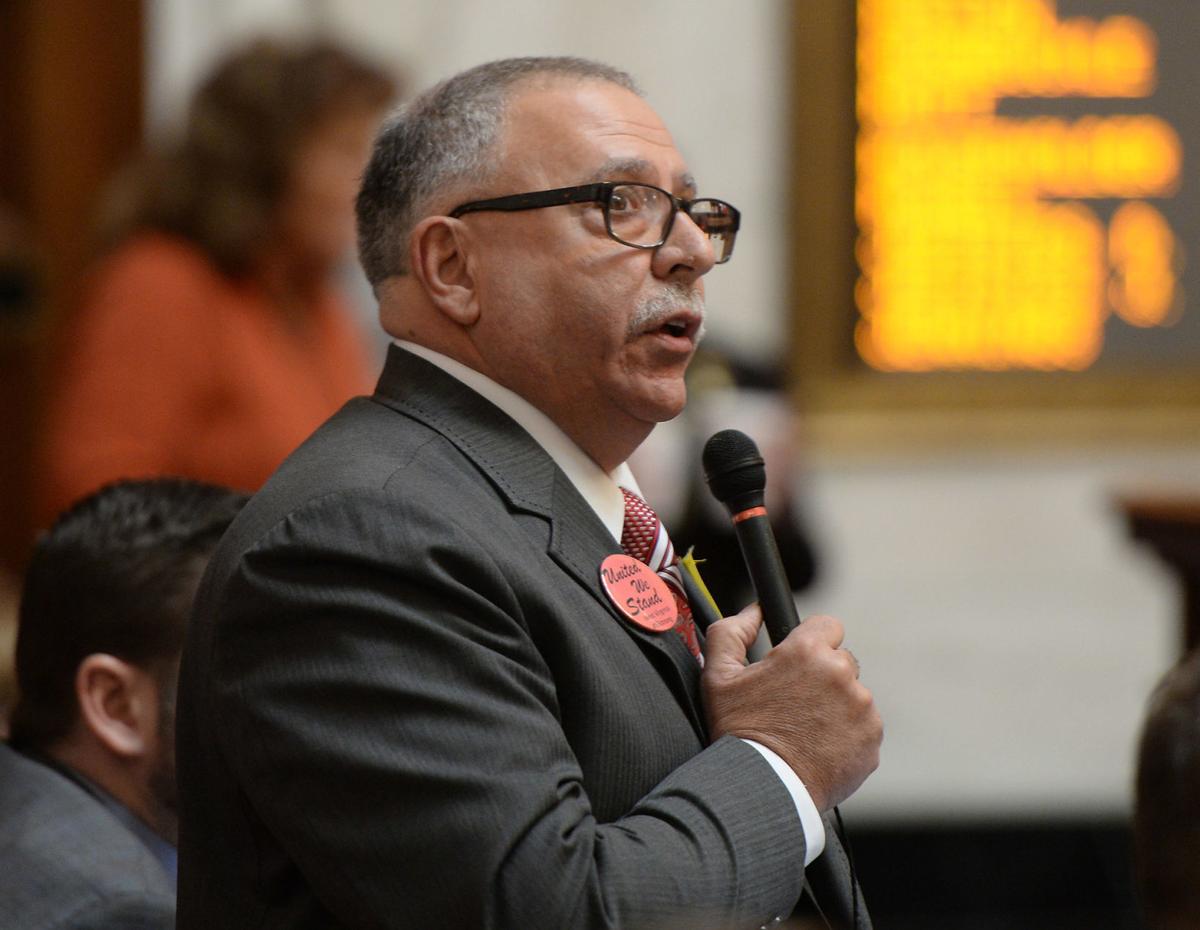 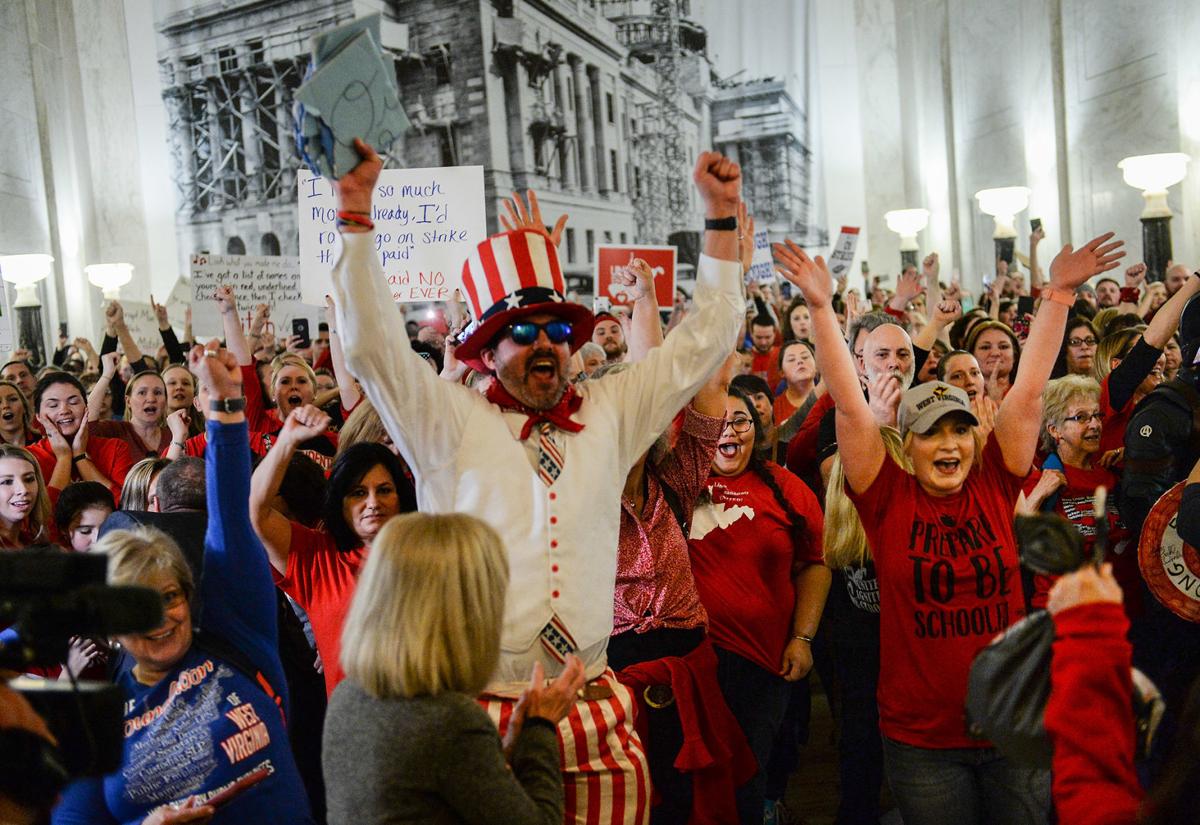 Striking teachers and supporters celebrate outside the House of Delegates chamber after the House killed the education omnibus bill Tuesday. 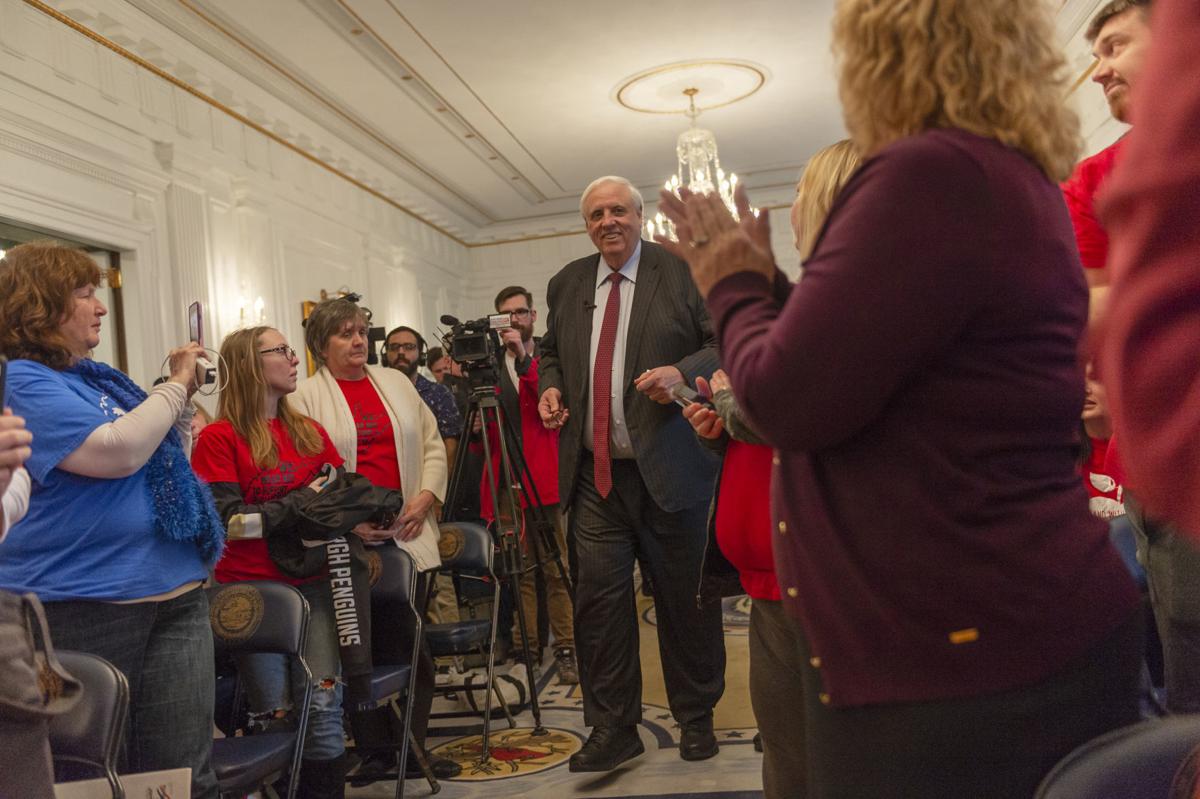 Gov. Jim Justice arrives at a press conference at the West Virginia Capitol on Tuesday afternoon, after the House of Delegates passed a motion to postpone indefinitely a vote on the controversial education omnibus bill.

Members of the House of Delegates, along with striking teachers and school workers in the House chamber, react after delegates voted to kill the controversial education omnibus bill by a 53-45 margin. Twelve Republicans joined all House Democrats to kill the bill.

Striking teachers and school workers celebrate outside the House of Delegates chamber after the House after delegates killed the controversial education omnibus bill on Tuesday afternoon.

Striking teachers and supporters celebrate outside the House of Delegates chamber after the House killed the education omnibus bill Tuesday.

Gov. Jim Justice arrives at a press conference at the West Virginia Capitol on Tuesday afternoon, after the House of Delegates passed a motion to postpone indefinitely a vote on the controversial education omnibus bill.

The state leaders of the three major public school employee unions, at about 6:45 p.m., called for the strike to continue Wednesday, eliciting cheers from a crowd of about 300 outside the House chamber doors.

The House vote to kill the bill, officially a vote to postpone it “indefinitely,” was 53-45. A previous motion to delay consideration of the bill until 4 p.m. Tuesday failed by the same margin. When the House reconvened for the 6 p.m. session, no delegate made a motion to reconsider killing the bill.

As delegates left the House chamber after 6 p.m. Tuesday, the crowd chanted things like, “See you tomorrow!”

As of about 9:30 p.m., 54 of the state’s 55 countywide school systems had officially called off school for Wednesday. Putnam County did not cancel classes. Some of those county-wide closures were because of inclement weather.

The steady roar of teachers and school workers who called a statewide strike on Monday evening crept into the chamber Tuesday as members of the House voted the omnibus down.

“Never underestimate the power of the people,” said Joe White, executive director of the West Virginia School Service Personnel Association, to a sea of red-shirted public employees cheering outside the House chamber after news broke that the bill died.

Fred Albert, president of the West Virginia arm of the American Federation of Teachers, spoke, as well.

“Your voices have been heard, and your voices will continue to be heard,” he said. “Don’t ever think that your voice does not matter, because this is proof that when you get active and you make your voice heard, it does make a difference.”

But later in the evening, West Virginia Education Association President Dale Lee said, “We believe there’s still a minute possibility for something to happen so ... we will be out in all 55 counties.”

Albert said the biggest concern among AFT union members is the possibility that the House could resurrect the bill through a motion to reconsider, an option that state union leaders said expires once the House adjourns Wednesday.

Still, there would remain various other ways provisions of the bill could survive, perhaps through other legislation during the remaining days of this session.

Senate President Mitch Carmichael, R-Jackson, was one of the principal architects of the education overhaul at large and the Senate’s strategy. He said he was disappointed in the House’s action.

“Unfortunately, today, the champions of the status quo won,” he said, “but that will not stop progress.”

To him, the Senate made no error in sending the House a rejuvenated bill, in terms of education savings accounts, charter schools and other nonstarters for members of the education system.

He said he had an agreement with the House Republican caucus that, if he sent a bill over much stronger in terms of ESAs and charter schools than what the House passed last week, the caucus would deliver 52 votes.

“We had an agreement, they had committed to 52 votes, or I wouldn’t have run the amendment,” he said. “What I’ll say is one’s word is all you have in this building. You need to honor your word.”

Union leaders said they had calls with the county-level union presidents and that these presidents said members supported striking another day.

Albert had said after a 3:30 p.m. news conference by Gov. Jim Justice that he favored going back to work Wednesday.

He said he talked to AFT staff members, his executive board and county union presidents at 5:30 p.m., before the evening House floor session started. He said they said that, even if the House didn’t reconsider the bill at the 6 p.m. session, members wanted to continue striking Wednesday.

“They said they had heard from their local members and they were not willing to take any chances at all,” he said.

At the 3:30 p.m. news conference, Justice called on the Legislature to pass a pure pay-raise bill and called for school workers to stop striking, and suggested studying, but not yet legalizing, charter schools and education savings accounts. But the Republican governor said Carmichael, who issued a statement Tuesday saying, “I am not defeated,” didn’t tell him Senate Republicans would support a pure pay-raise bill.

In interviews after the vote, delegates expressed sentiments ranging from frustration with the Senate for the omnibus concept, a sense of relief with a contentious bill in the rearview and unease with the possibility of a vote to reconsider the motion to postpone indefinitely.

Among the cohort that voted to kill the bill was Delegate Mick Bates, D-Raleigh. He said the lesson that should be learned from the past few weeks: Return to the regular legislative process and make sure all stakeholders have a seat at the table, if lawmakers are serious about education reform.

“Where was this conversation about education reform from up until the election, following November — I mean this was on no one’s agenda, and it just comes out of left field from Mitch Carmichael and the Senate leadership, and it’s shoved down our throats,” he said. “It’s not the way to go about things.”

However, he questioned whether the Legislature moved on one of the key issues that ended last year’s teacher strike.

“Where’s the PEIA conversation that led to the nine-day teacher strike back last year?” he said “What have we done with that?”

Delegate Roy Cooper, R-Summers, voted with Democrats Tuesday, and has voiced opposition to charter schools, ESAs and other concepts included in the omnibus bill in the past.

“I don’t trust the Senate,” he said, explaining his vote to kill things before a conference committee was formed. “We were willing to negotiate in good faith, and I don’t think they were. I think they weren’t willing to compromise.”

Delegate Marshall Wilson, R-Berkeley, has spoken in constant support of ESAs, charter schools and other pieces of the bill. He said he was disappointed in the outcome but that he would like to see some of the provisions revisited as standalone pieces.

“It’s a shame,” he said. “I think what we’ve done is we voted down an opportunity for liberty, for innovation and creativity in our education system, and now we’re going to have to start again at ground zero.”

House Minority Leader Tim Miley, D-Harrison, said education reform is and should be a bipartisan effort. He said the moral of the story is that stakeholders need more input, and individual ideas should rise and fall on their own merits.

“I just think, if anything, it’s just a message that, if you want true, meaningful, comprehensive education reform, it needs to be a product of having input from the actual people who are in the classrooms to share with you what impediments they are finding in order to be able to teach students successfully,” he said.