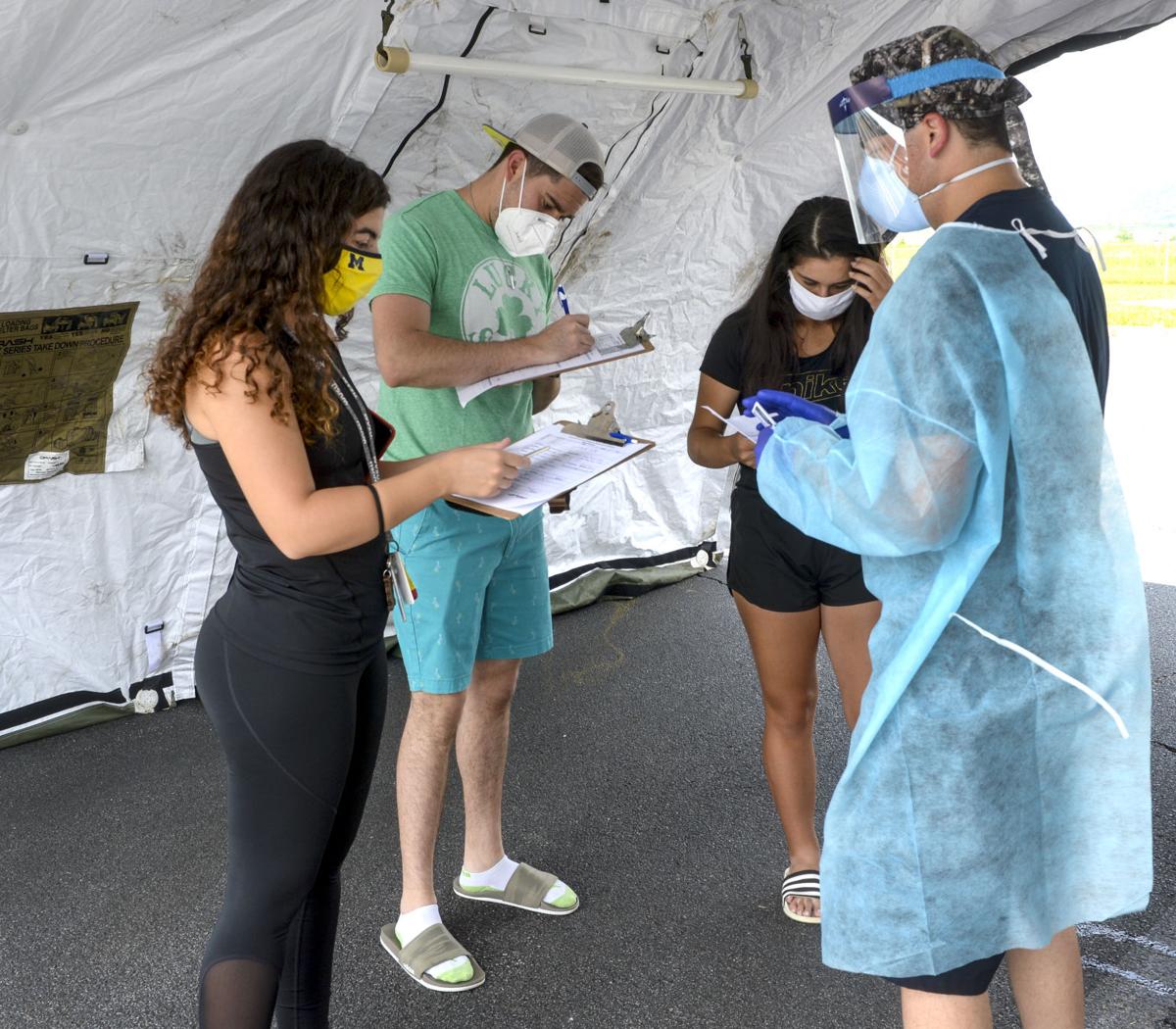 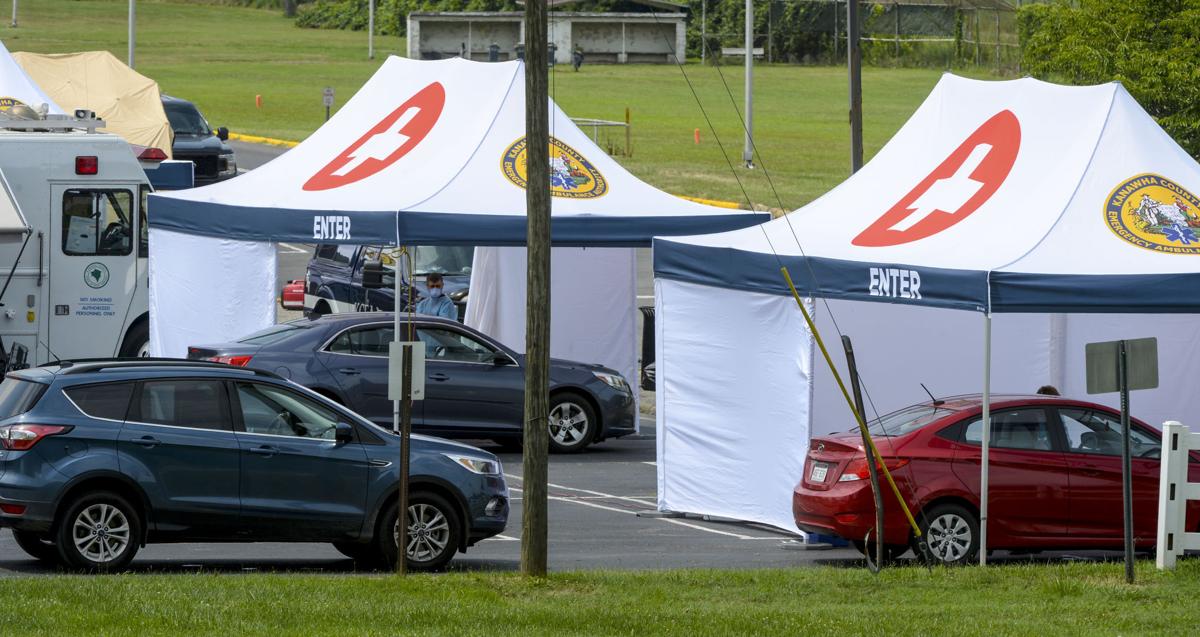 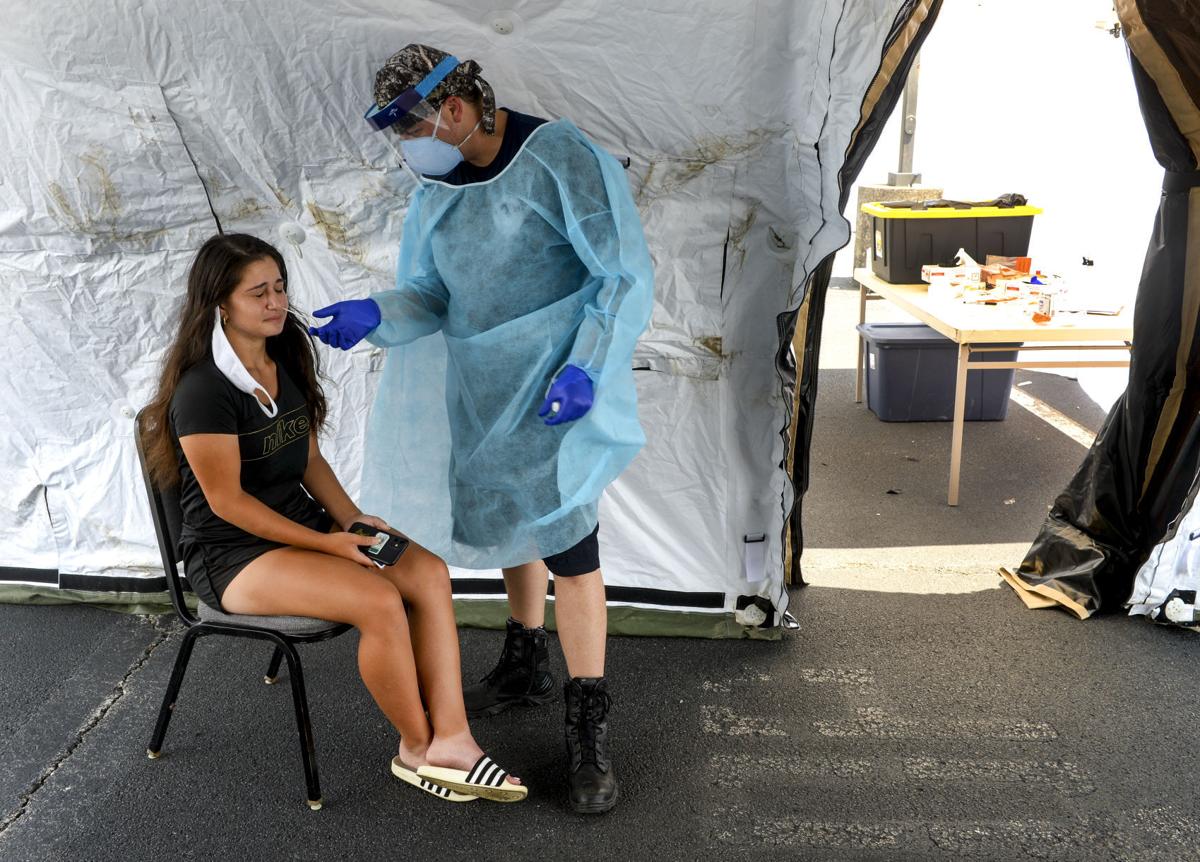 West Virginia State University freshman Maya Haidari, 19, gets tested for COVID-19 at a pop-up testing site at the school Thursday.

West Virginia State University freshman Maya Haidari, 19, gets tested for COVID-19 at a pop-up testing site at the school Thursday.

Classes are scheduled to start soon at West Virginia’s public four-year colleges. Student safety, and that of the colleges’ employees, are at stake in these schools’ reopening plans.

But how schools define “reopening,” and what safety steps they’re taking, remains a moving target.

Just this week, West Virginia State and Fairmont State universities announced they would initially test all students for COVID-19, but they’re still offering a normal amount of in-person classes and planning to finish the fall semester by Thanksgiving break.

Despite Kanawha County’s active cases steadily increasing, from 60 at the start of this month to over 300 now, West Virginia State plans to let nearby students start moving their belongings into dorms this weekend.

Students from out of state or parts of West Virginia hours from the Institute campus get to start living in the dorms on Monday. Others move in through the end of next week, all on staggered days.

Scott Woodard, the interim provost, said the university plans for about the same proportion of in-person courses it has in a regular academic year — although students may choose to listen to and participate in almost all classes online.

Woodard said the school doesn’t have lecture classes with hundreds of students, and it has implemented precautions — such as daily temperature checks for students, employees and visitors and a ban on students who don’t live in dorms being in them.

On Wednesday, the school announced that all students taking in-person classes must have negative test results before coming onto campus or entering the dorms.

“We feel like we’ve done everything humanly possible to make the campus community and environment as safe as possible,” he said.

Planning to open this soon and offering many in-person courses is something that larger four-year public colleges in West Virginia are backing away from.

The state’s two largest universities announced this week that their reopening will be online only for many students.

On Monday, WVU, noting the ebbing, but still concerning surge in cases in Monongalia County, announced a delay of student move-in. It will now begin Aug. 15.

More importantly, it said, most upper-division undergraduate courses will be partly online or online only until further notice.

On Wednesday, Marshall announced that nearly all sophomore, junior and senior courses would be just online, at least until the spring semester.

But Fairmont State, just 20 miles southwest of Morgantown, is sticking with the same proportion of in-person courses it would have in a regular academic year, President Mirta Martin said.

“They want to come back to Fairmont State for that unique education we provide,” Martin said, “which is a high-touch, face-to-face instruction. The same proportion of face-to-face will be the case, with lower density levels and proper classroom distancing and the requirements of always wearing the mask.”

Still, she said, cameras in classrooms will allow students who feel even slightly ill to watch live online from elsewhere.

Fairmont State announced its own plan changes this week. The plan for students to start dropping off belongings in dorms Friday was canceled, and the day students actually will start moving in was postponed three days.

The first move-in, from Aug. 9-11, will be for only freshmen, international students, nursing students and education students, who will be student teaching, and some others.

Sophomores, juniors, seniors and graduate students are set to start moving in a week later.

Similarly, the first group of students, including the freshmen, will start in-person classes Aug. 17, while the second group will join them a week later, after just a week of online-only classes.

Fairmont State wasn’t originally going to do that, and it’s still not planning to initially test commuter students like it is the others.

“Testing is only a snapshot in time and is not a predictor of safety,” Martin said. “What is a predictor of safety is the social distancing and the universal mask wearing. And so, therefore, we were actually one of the first to announce that masks would be required in our classrooms, and then that was solidified by the governor’s [mask] mandate a week or two later.”

Fairmont State’s website had said that, “when face coverings are worn, social distancing in the classrooms is not necessary,” but Martin said Thursday that desks are being spaced 3 to 6 feet apart out of “an abundance of caution.”

Among other precautions, the university is providing N95 masks to its faculty members. Those are the ones first responders are recommended to use. And students are banned from visiting one another’s rooms.

Unlike WVU, Fairmont State is overwhelmingly composed of in-state students, and classes are much smaller, Martin said.

Then there’s Glenville State College, 90 miles southwest of Morgantown in the heart of the state, Gilmer County, with only one active COVID-19 case.

Yet it is urging negative nasal swab COVID-19 tests before students move in (and requiring them upon arrival if they don’t have them), plus it is requiring antibody tests for all students after they arrive on campus, followed by tests of 3% of all students and employees daily through Nov. 20.

And it will do weekly “clean/disinfect room checks” in the dorms, per its online plan.

“Part of what we feel good about is the remoteness of our campus and the fact that we have only one case in our county right now,” President Mark Manchin said. “We want to keep it that way.”

Jay Canterbury, a sports studies and health and wellness instructor at West Virginia State, was the last in line there Thursday for drive-thru testing as a coming storm cut it short.

Canterbury said the school’s plan is “going to make it as safe as possible” but that he would prefer classes staying fully online.

He noted the surges in cases and deaths in other states.

“What about the students that are coming in here for in-seat courses from different states?” he said. “We have a lot of students from Ohio, and that is one of the hotspots for the coronavirus.

“I see all these things on the news nowadays about all these teenagers and all these college students, they’re having parties with a big bunch of people, and a lot of people ignored [rules by] going to the beach in South Carolina, Myrtle Beach and Florida,” he said. “That is not essential. You can go on vacation any year. If you pass away from the coronavirus, there are no more vacations.”