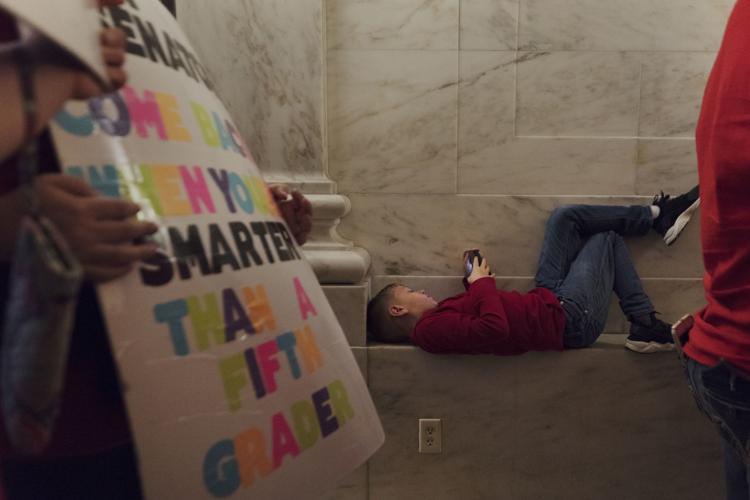 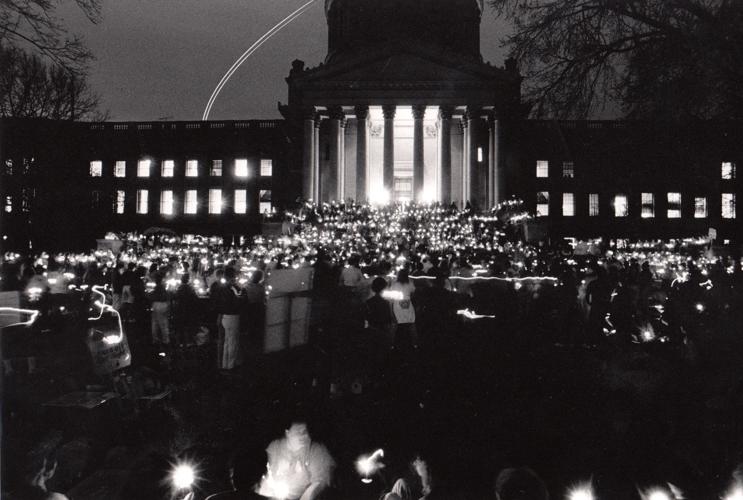 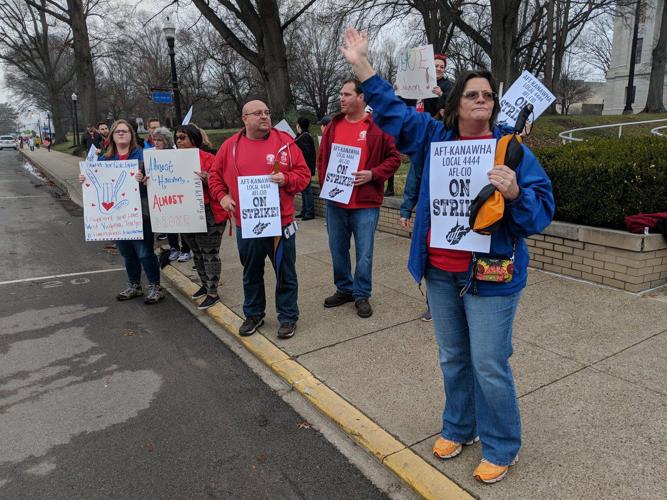 West Virginia is in the middle of its second-ever teacher strike. Teachers, this time joined by school service personnel, walked off the job Thursday, when thousands came to the state Capitol to show their frustration with legislators and Gov. Jim Justice over what the employees believe are inadequate pay and benefits and harmful legislation. Of the employees who didn’t come to the Capitol, many demonstrated outside their schools and in their communities.

The strike continued Friday, with smaller but still robust protests at the Capitol. Monday will mark the walkout’s third day.

Below are answers to a few questions about this year’s strike, as well as the state’s first teacher strike:

How is this like/unlike the last ‘statewide’ teacher strike?

West Virginia’s first teacher strike in history was nearly three decades ago, in 1990.

But that strike wasn’t technically statewide. It started with eight and gradually grew to include 47 of the state’s 55 counties.

Cabell County was among the eight where teachers never went on strike in 1990.

Before the start of this year’s strike Thursday, one-day work stoppages earlier this month had already closed public schools in 11 counties, including Cabell.

The 1990 strike also did not involve public school service personnel, a category that generally includes non-teachers, like bus drivers and cooks.

So far, this year’s strike, not counting the previous one-day work stoppages in certain counties, has lasted two school days. Ahead of those days, county school systems all announced they would be closed.

Union leaders have called for the strike to continue Monday. If certain school systems reopen Monday, that could mean consequences for employees who don’t show up to work in those counties.

Officials in Berkeley and Jefferson counties said Friday that their school systems would be open Monday, but then reversed their decision Saturday afternoon and said schools would be closed.

It eventually ended after then-Gov. Gaston Caperton called for a special legislative session before the start of the 1990-91 school year. Then-Senate President Keith Burdette and then-House of Delegates Speaker Chuck Chambers also promised to recommend the special session.

In the special session in August, state lawmakers approved a $5,000 pay raise for teachers to be phased in over three years and added about $27 million toward equalizing teacher salaries statewide. They also made various education changes, including creating faculty senates in each school.

On March 10, 1990, a few days into the strike, Kayetta Meadows, then-president of the West Virginia Education Association, said the strike would continue because Caperton had broken his promise to hold a special session. Caperton denied making such a promise.

Did courts try to

Some did. On March 12, 1990, a circuit judge in Jefferson County granted a request from the board of education for a preliminary injunction to stop members of the Jefferson County Education Association from continuing to strike.

On April 12, state Supreme Court justices upheld the Jefferson preliminary injunction, saying, “Public employees have no right to strike in the absence of express legislation or, at the very least, appropriate statutory provisions for collective bargaining, mediation and arbitration.”

But later that year, on Nov. 9, the high court said Hey’s order was meritless because he didn’t confine his decision to his own circuit. Justices wrote, “We do not believe that the circuit court of one county has the authority to enjoin the acts of citizens occurring in other counties, except where the judge of the other county is interested in the proceeding and unable to act.”

Will the school days lost due

to the strike be made up?

It seems the days missed Thursday and Friday will be made up, according to statements from Christine Campbell, president of the state arm of the American Federation of Teachers union, and Deputy State Schools Superintendent Clayton Burch.

Briana Warner, communications director for the Kanawha County school system, wrote in an email that the missed days Thursday and Friday will be made up in Kanawha on May 25 and 29, which is now the planned last day for students.

She said if the school system were to close for more work stoppages, those days would have to be made up either during spring break or after May 29.

Last year, Justice signed into law a bill (House Bill 2711) that, among many other education changes, allowed county school boards that extend their school days by at least 30 minutes beyond the state minimum requirements to use this accrued extra time to make up days canceled due to necessary school closures.

lose pay for those days?

Burch said, “The counties that are closing are simply closing school, and any made-up days would be paid as makeup days.”

But he also said it’s yet to be seen whether it makes any difference that these closures were for work stoppages.

“If the system chooses to stay open any day during a work stoppage — and there are enough teachers present to keep the school open — any teacher who didn’t show up to work would have their pay docked for that day,” Warner wrote. “Alternately, the school system could close again — either by choice or because there weren’t enough staff to care for children.”

State law says, “Personal leave may not be used in connection with a concerted work stoppage or strike,” though, as discussed earlier, school days that school systems agree to cancel ahead of time may be considered neither.

When did West Virginia school

employees last get a raise?

Many school employees interviewed say maintaining Public Employees Insurance Agency health insurance costs and benefits at their current levels is a bigger issue than pay increases. PEIA Finance Board members, at the governor’s urging, have delayed premium increases and benefit cuts, but teachers say that just delays the pain, and a long-term solution is needed.

Employees have also connected their strike to their opposition to bills that would downplay the role of seniority in layoff and transfer decisions, and have other effects.

As established in state law, many school employees already receive an annual pay increase for each additional year of service. Also, individual county school systems can provide raises if they have available local funds.

As for a statewide pay increase, the last one was in 2014, when then-Gov. Earl Ray Tomblin signed into law Senate Bill 391, giving $1,000 pay raises to public school teachers and 2 percent raises to school service personnel.

That law also added this language to state code: “It is the goal of the Legislature to increase the state minimum salary for teachers with zero years of experience and an A.B. [bachelor’s] degree, including the equity supplement, to at least $43,000 by fiscal year 2019.”

Fiscal year 2019 begins July 1, 2018. The state minimum salary plus equity supplement for a teacher described by that law is currently about $33,000, according to state Department of Education data.

How does West Virginia compare with other states in teacher pay?

The National Education Association, of which the WVEA is part, maintains teacher pay rankings from state to state.

The NEA’s rankings show West Virginia was 48th among the 50 states and Washington, D.C., in average teacher pay in 2017.

All of West Virginia’s public schools will be closed again Monday, the third day of a statewide teacher strike.

Robert Saunders: Poe and the bird of ill omen

The Hub names latest locations for Communities of Achievement Program

Backcountry Film Festival to be screened in Davis

How to Turn Your Finances Around in the Months Ahead