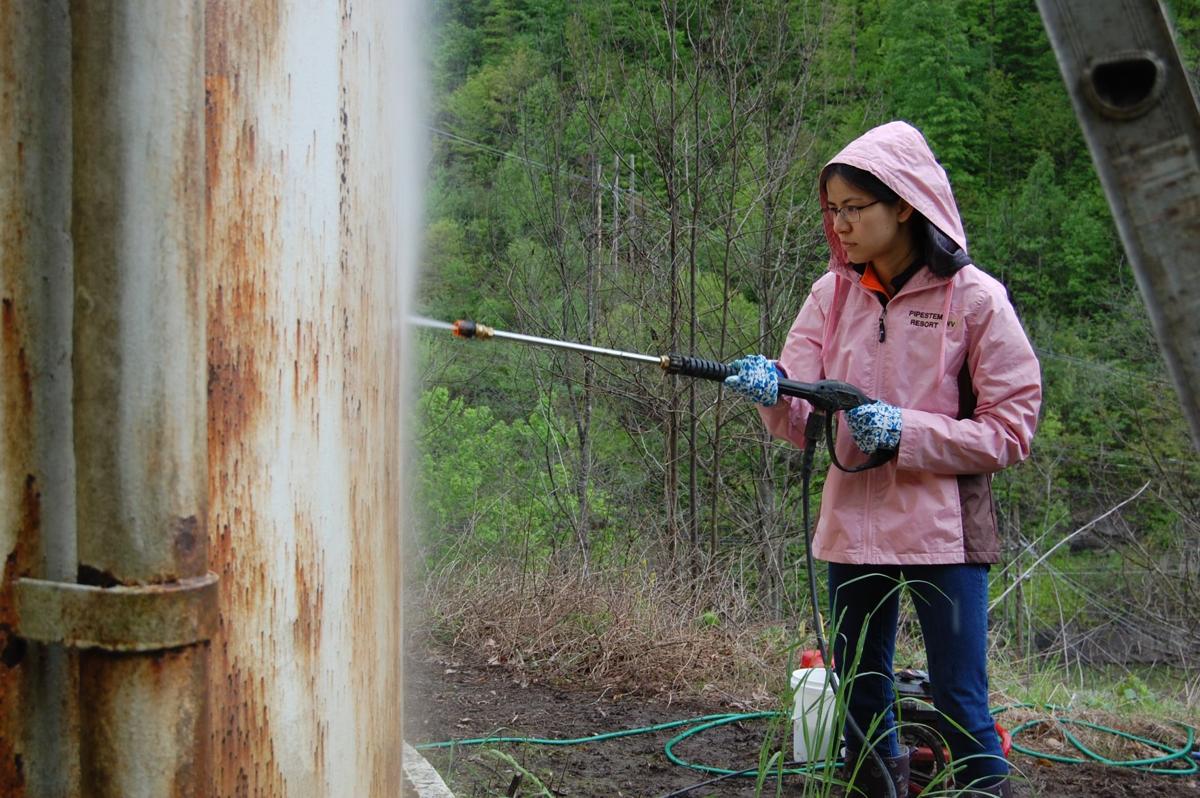 Esther Raub, an engineering student at West Virginia University, uses a pressure washer to clean the side of a water tank in Prenter. 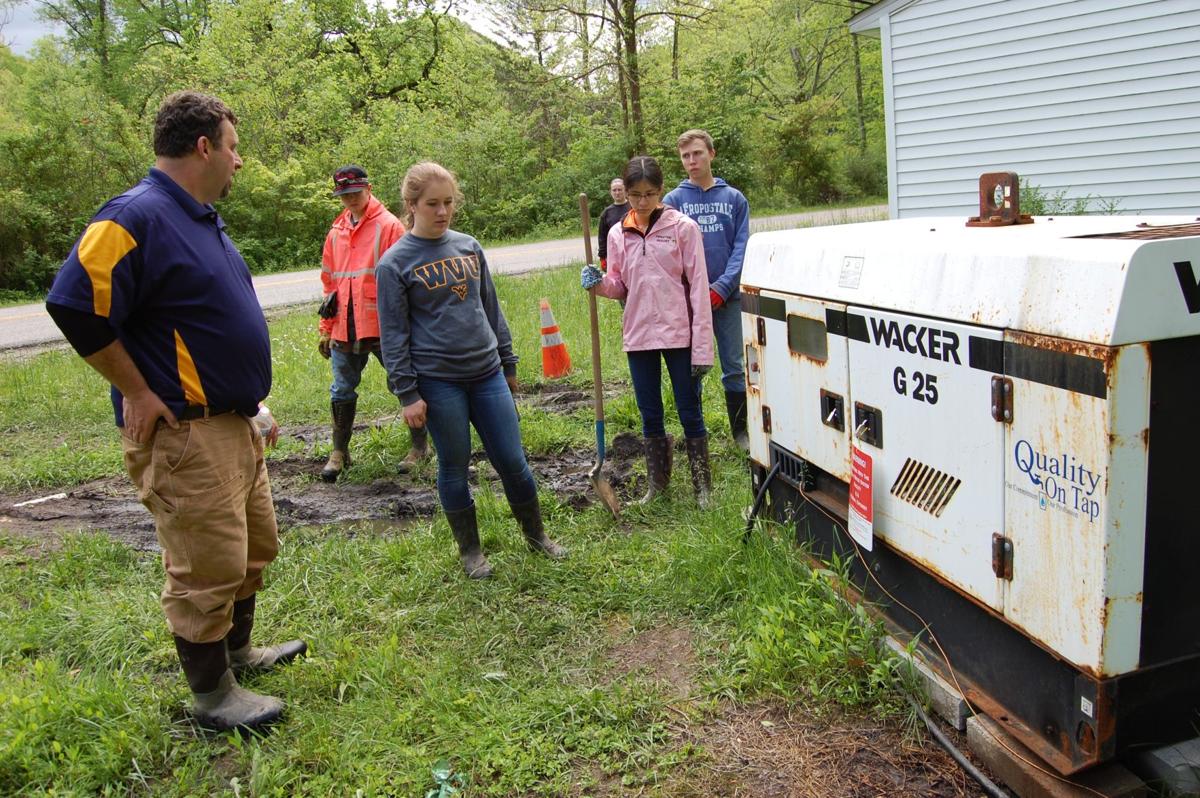 West Virginia University students and J.D. Douglas, of the Office of Environmental Health Services (left), gather next to a generator that pumps water through a tank in Prenter. 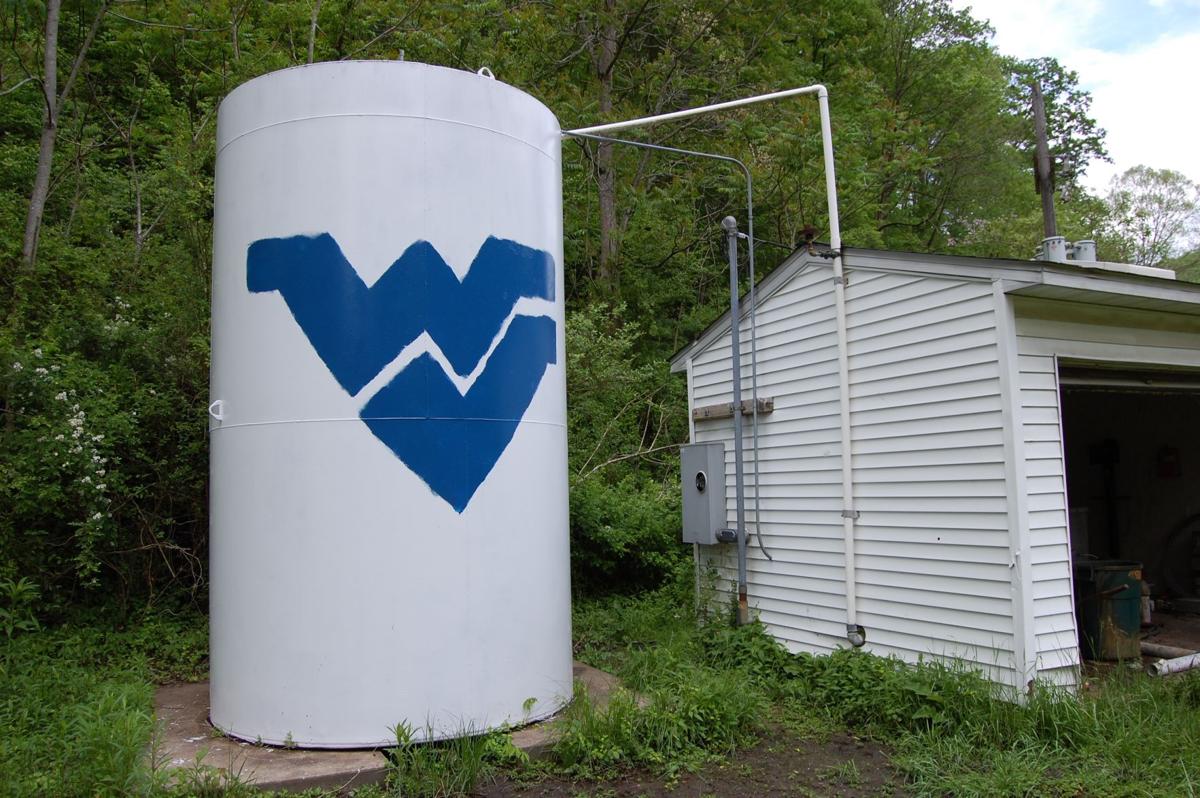 A flying WV hand-painted by WVU Engineers Without Borders students is displayed on a water tank in Prenter. 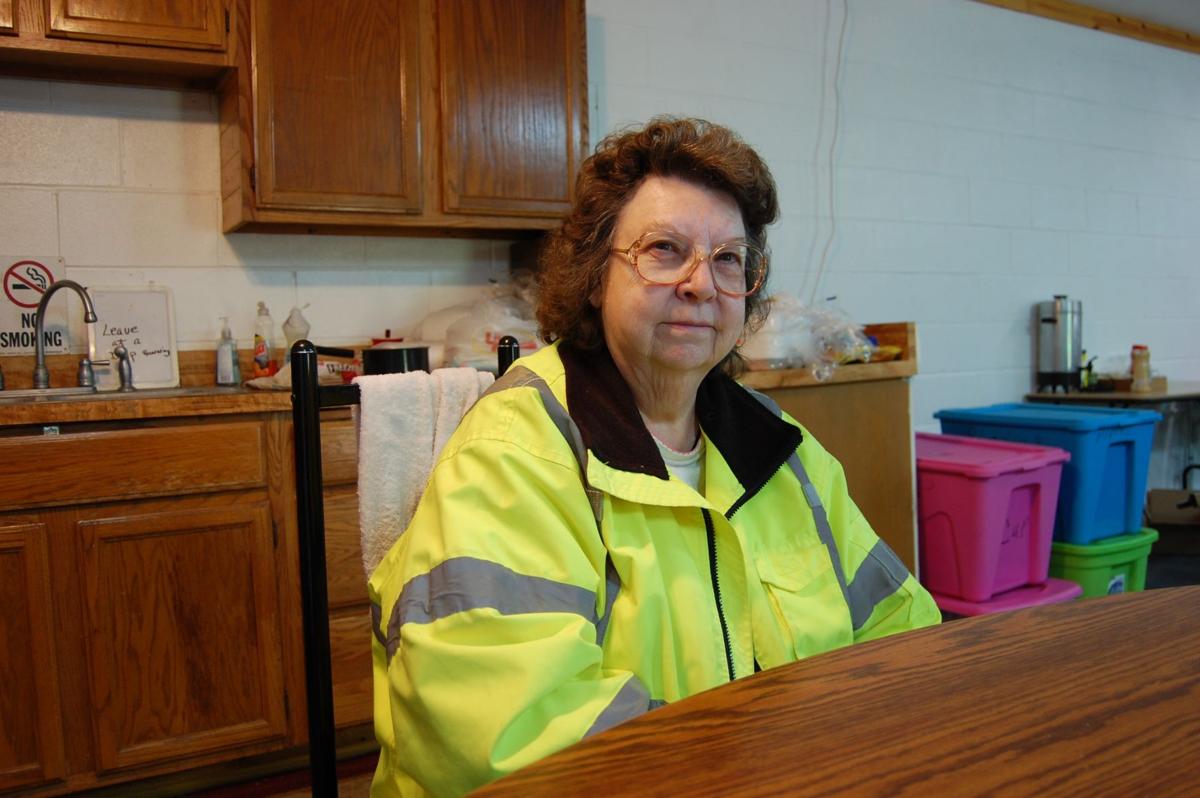 Billie Bender, of Prenter, sits inside the community’s meeting room. 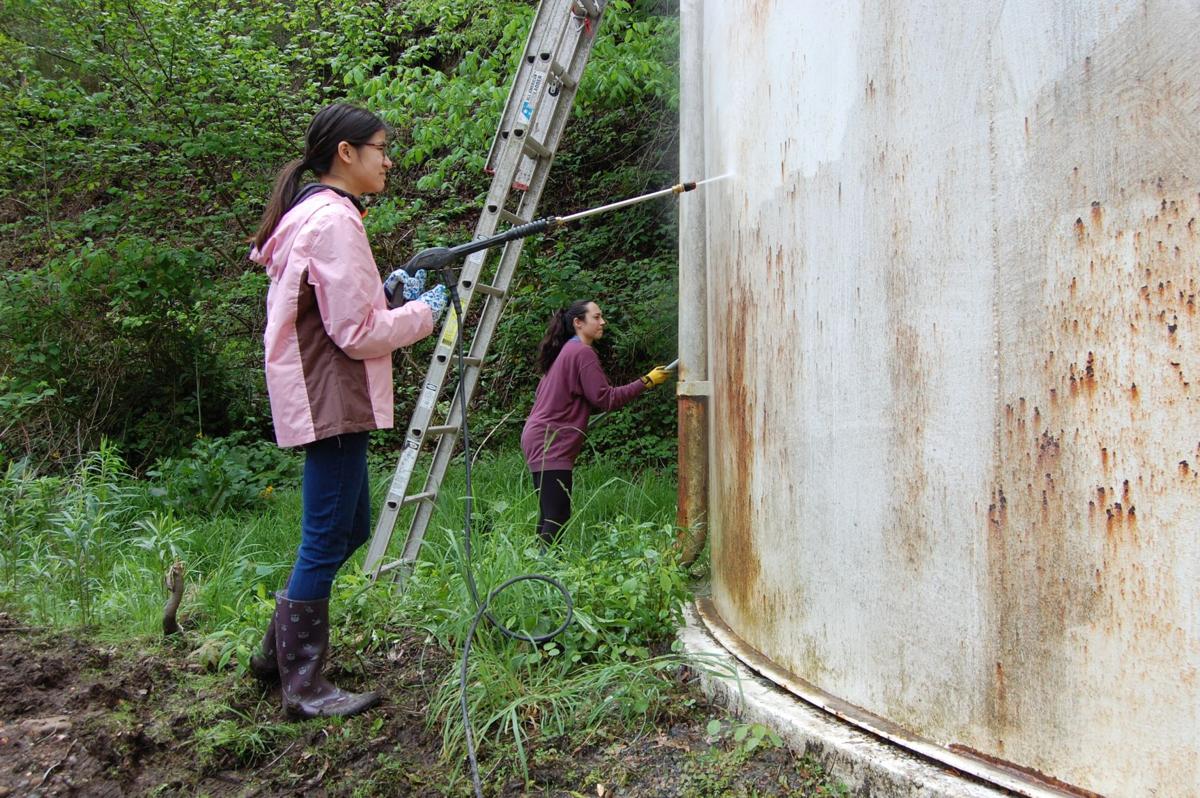 Esther Raub (front) and Alexis Zini cleans the outside of a water tank in Prenter. 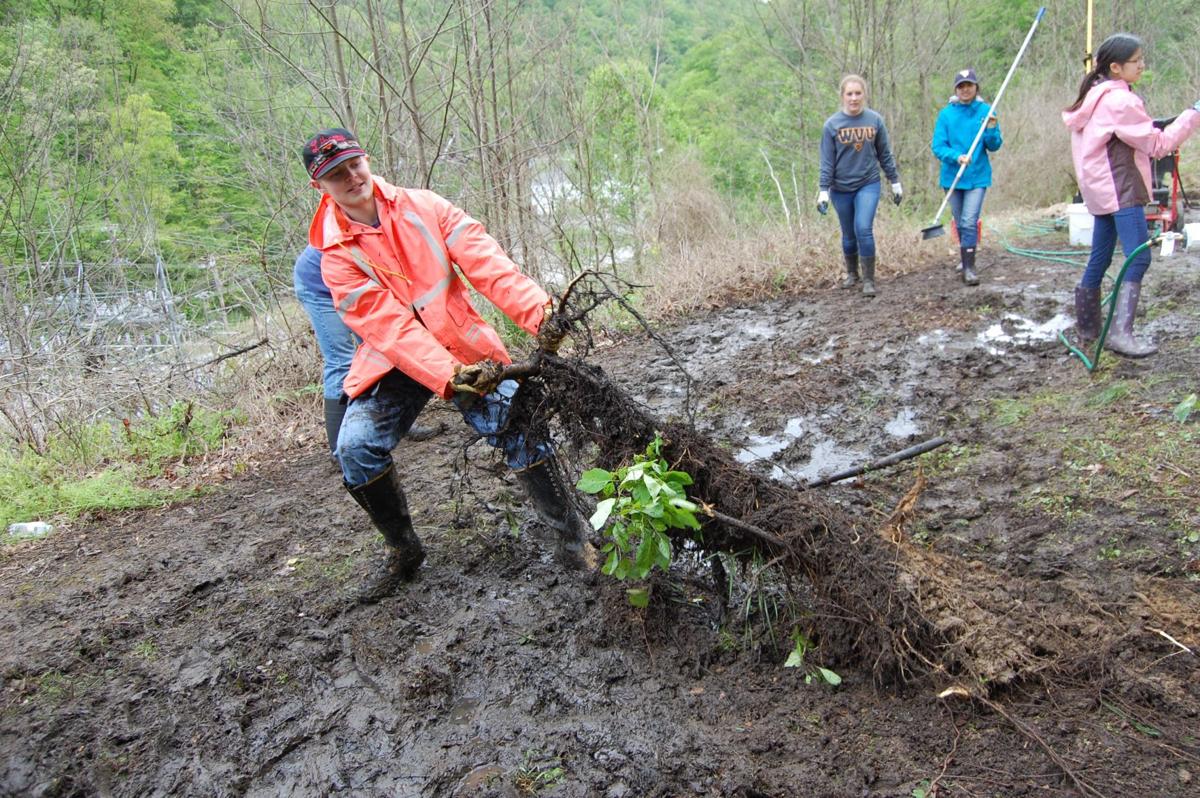 Luke Stover pulls brush away from a water tank in Prenter. 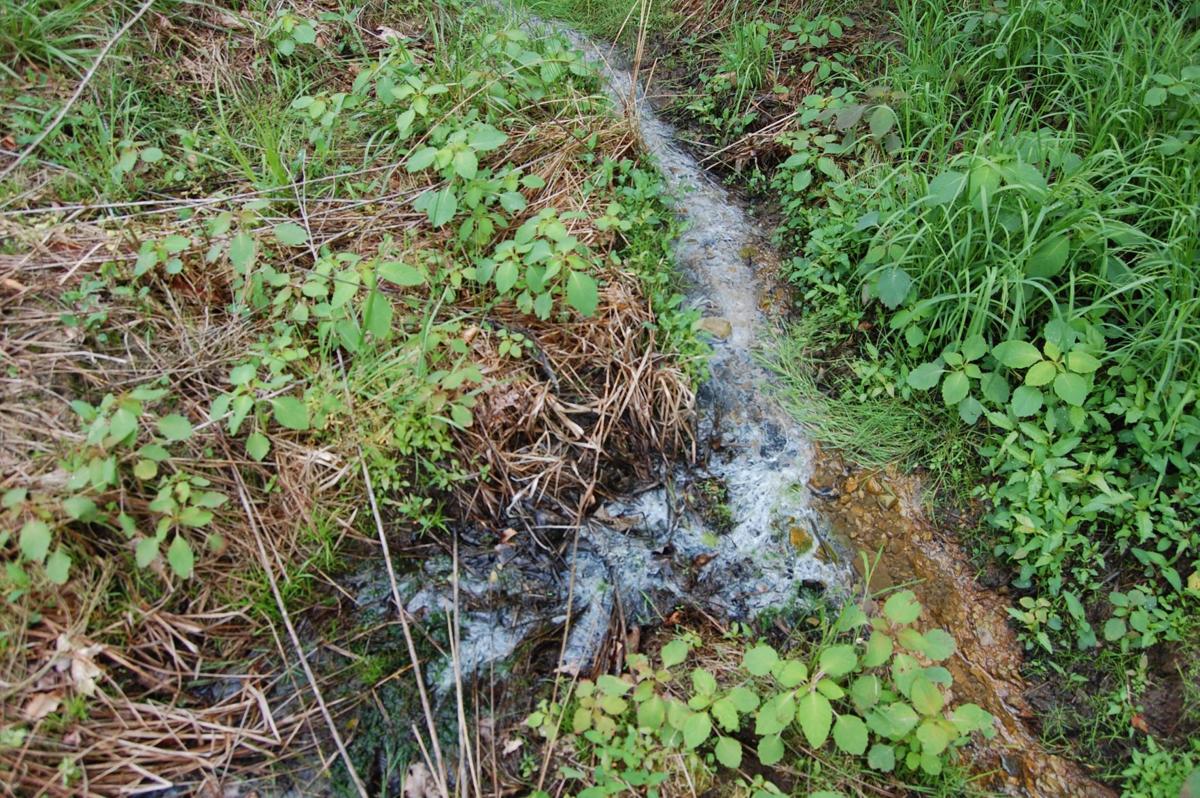 Water carries hydrogen sulfide as it runs on the ground from a water tank in Prenter. The tank, which has holes in the roof, is out of service.

Esther Raub, an engineering student at West Virginia University, uses a pressure washer to clean the side of a water tank in Prenter.

West Virginia University students and J.D. Douglas, of the Office of Environmental Health Services (left), gather next to a generator that pumps water through a tank in Prenter.

A flying WV hand-painted by WVU Engineers Without Borders students is displayed on a water tank in Prenter.

Billie Bender, of Prenter, sits inside the community’s meeting room.

Esther Raub (front) and Alexis Zini cleans the outside of a water tank in Prenter.

Luke Stover pulls brush away from a water tank in Prenter.

Water carries hydrogen sulfide as it runs on the ground from a water tank in Prenter. The tank, which has holes in the roof, is out of service.

PRENTER — On the side of the two-lane road running through this unincorporated Boone County community, a hand-painted West Virginia University logo covers the side of a water tank recently painted white.

It’s a symbol of hope for the community with a history of hardships from water-system woes.

The effort put into projects like painting the water tank comes from a group of WVU students involved with the school’s Engineers Without Borders organization. The group’s work has refueled the community’s optimism for a future with clean running water.

One resident, Billie Bender, 79, doesn’t plan to move out of Prenter, the place she’s called home for 39 years.

“It’s an option,” she said, “But I don’t plan on moving unless I have to. It’d be a big job for me because of my age, and to pack stuff up and move would be really hard.”

The community’s water system is classified as a public water system in that it has more than 15 connections or 25 people on the system.

Prenter has about 63 residents. The system does not bill or have infrastructure like most public water systems, and the water isn’t being treated.

A select group of WVU students made trips to the rural community to ultimately get clean running water into the homes.

Prenter’s system is commonly referred to as an abandoned or orphaned system. Prenter is on a permanent boil water advisory until things change. For the water system to improve, the former coal community must acquire its land so electricity can be restored to the water pumps and equipment.

The students have cleaned and made repairs to the water tanks in addition to studying the water supply and learning ways for the community to legally acquire the land.

They’ve been working under the supervision of J.D. Douglas, supervising engineer for the St. Albans District of the West Virginia Department of Health and Human Resources Bureau for Public Health, Office of Environmental Health Services, Environmental Engineering Division.

Douglas has been working off and on in the Prenter area to restore treated water since the coal company, Patriot Coal, went bankrupt and moved out eight years ago.

Prenter has been looking into owning the land since then so it could have control over the water.

ERT Compliant Fuel acquired the land out of the bankruptcy proceedings, and Honey Island Coal Company, LLC manages it.

“They said this water problem is our problem,” Bender said. “It’s not their problem, and we have to take care of it.”

Residents pay the Georgia-based companies $165 monthly for their leased homes, Bender said. As with any leasing agreement, a resident would be evicted if he or she didn’t pay rent.

Through the last eight years, the ball was dropped on the process to acquire the land and get clean water after Douglas was promoted and no longer worked in the district. He recently transferred back and picked up where he left off.

Bender doesn’t drink the water or cook with it. Although the water appears clear, it smells of sulfur, or like rotten eggs. Residents have concerns of potential waterborne diseases and infections if the water is ingested.

The running water is used, however, to wash clothes, shower and flush toilets. To purchase water for consumption, residents travel about a half-hour to the grocery.

“It doesn’t look dirty when it comes out, but when you clean your shower, I’m telling you it looks like feces or something in it. It looks awful,” Bender said. “Sometimes it almost makes me sick at my stomach trying to clean it.”

Bender and her neighbors went three weeks without running water and electricity following a recent thunderstorm. During that time she said she relied heavily on rain water.

“The storm knocked three electric poles down,” she said. “They wouldn’t hook the electric back up to the pump because it’s not in anyone’s name, they said. We’re using a generator now.”

The generator is borrowed from the West Virginia Rural Water Association. Electricity won’t be restored for the pump until the community legally owns the land.

Appalachian Electric Power sources the electricity for the homes, but the water system itself had a coal company line.

Residents in the community are looking for grants and options to get reliable electricity to the water pump. They allot money for fuel to keep the generator running. A resident also pumps water each day so the generator doesn’t need to run all day. Churches and organizations have made donations to help with the cost of fuel.

For the community to own its land, it has to become an unincorporated nonprofit association. The community is looking into forming a 501c3 nonprofit and registering with the state tax department as a business so the land can be owned.

Once it does this, it can get power running the water pumps and can assess the equipment. Then comes disinfecting the water and removing the bad smell.

Morgan King, a junior civil engineering major at WVU, has been the leading force behind the Engineers Without Borders service project. She interned for Douglas at the Office of Environmental Health Services, in Charleston, and learned about orphaned or abandoned water systems in West Virginia.

“There’s 13 systems in the state that are abandoned, and that just means that, for whatever reason, they all differ in their specifics. But the water itself is not treated, but it’s still flowing into homes of community members,” King said.

Those abandoned systems include five in Wyoming County, three in Mercer County, two in McDowell County and one in Fayette, Boone and Summers counties.

“They’re very small communities, but the fact that people live there, it shouldn’t be neglected,” King said.

The group took a particular interest in Prenter.

“We wanted to do something that had more of an engineering focus, and the timing worked out in talking with [Douglas] that Prenter had this need,” King said. “We decided to make this our service project for spring break and go down there and assess the situation. Our goal was to get the maintenance up on the tanks so that they would last and wouldn’t have to be replaced.”

They also got measurements for a fence in the future and samples of the water for tests to confirm the contaminants and environmental impacts.

The organization strives to promote sustainability through a technical solution in a community and implement it. The group has been working with Douglas to get all of the steps finished for Prenter to have its own functional water system.

The best way it has found to do so is by becoming an unincorporated nonprofit, because larger utility companies do not see a good return for expanding equipment into the rural communities, King said.

“Our end goal is to get equipment fixed, get electricity fixed, water flowing and clean,” King said. “We’re just college students. We’re trying to spread the word that the end isn’t near if we get other people to help.”

While the group of students can’t help the community financially or with legal action, it can spread the word to others and give those directly affected a sense of hope for the future.

“When they see that flying WV, they’ll know Mountaineers look out for Mountaineers,” King said.

Pointers On Preparing For Power Outages