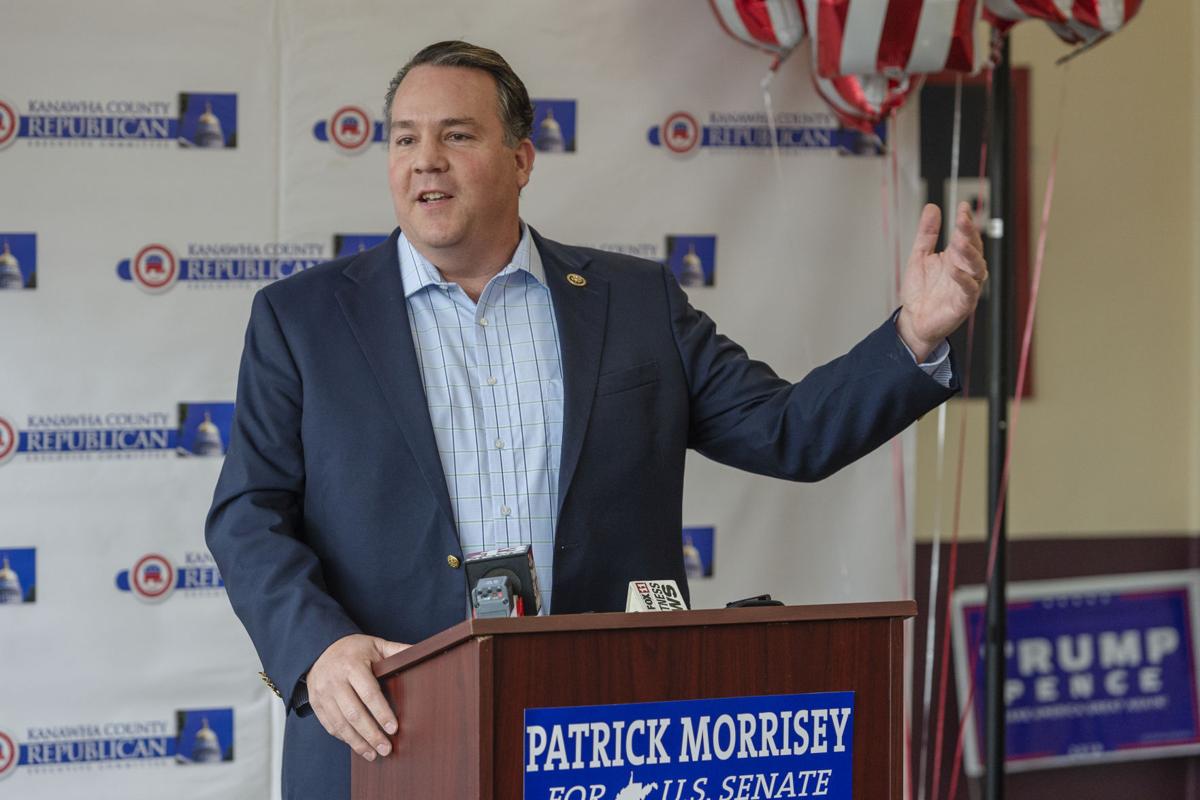 U.S. Rep. Alex Mooney, R-W.Va., speaks at an October 2018 press conference in Charleston, where his campaign spending has been greatly limited compared to the area around his Charles Town residence, where he has regularly reported spending campaign funds at restaurants and gas stations. 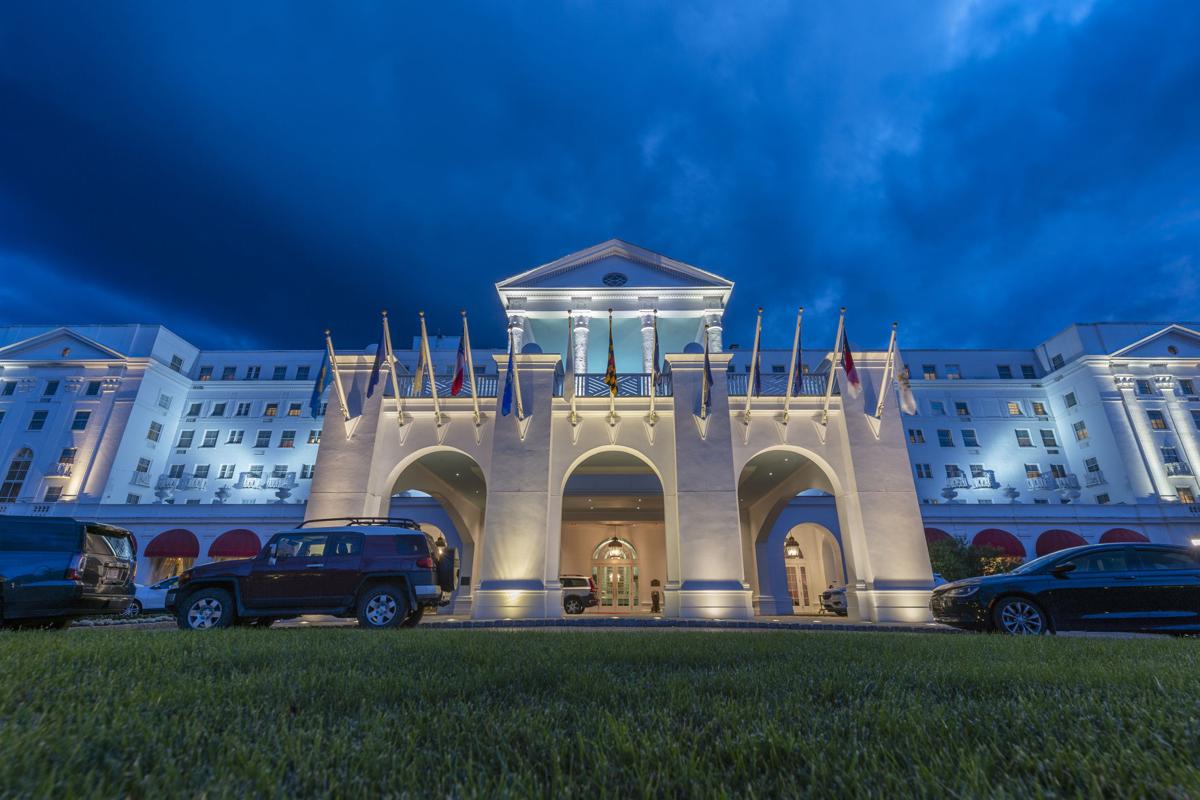 Pictured is the Greenbrier resort in White Sulphur Springs in June 2019, three months before the campaign for U.S. Rep. Alex Mooney, R-W.Va., recorded spending $540 for catering there in one of nine expenses totaling more than $4,800 that his campaign has spent there since Mooney took office in 2015 according to Federal Election Commission filings.

U.S. Rep. Alex Mooney, R-W.Va., speaks at an October 2018 press conference in Charleston, where his campaign spending has been greatly limited compared to the area around his Charles Town residence, where he has regularly reported spending campaign funds at restaurants and gas stations.

Pictured is the Greenbrier resort in White Sulphur Springs in June 2019, three months before the campaign for U.S. Rep. Alex Mooney, R-W.Va., recorded spending $540 for catering there in one of nine expenses totaling more than $4,800 that his campaign has spent there since Mooney took office in 2015 according to Federal Election Commission filings.

Alex Mooney was concerned about the government subsidizing too many meals.

On May 18, 2018, the Republican congressman representing West Virginia’s 2nd District voted for a bill that would have expanded work requirements for the food stamp program that had lifted 3.4 million people out of poverty in the United States the previous year.

That same day, Mooney’s campaign spent $57.79 at Weis Markets in Ranson on food and beverages, according to a campaign finance report filed with the Federal Election Commission.

It was one of seven purchases his campaign made totaling $288.79 at that Weis Markets location from April through June 2018, according to the quarterly finance report his campaign filed for that span.

It was one of 62 purchases amounting to more than $6,800 that his campaign made at establishments for food and beverages during those three months.

Exactly half those purchases came at fast-food and full-service restaurants in Ranson. The Weis Markets store there is located seven miles from the four-bedroom Charles Town home Mooney purchased for $430,000 in 2015, according to Jefferson County records.

His campaign spent more than $86,000 on food and beverages from the start of 2015 through June, with the vast majority of those purchases coming at restaurants in Ranson.

Concerns have been raised that Mooney’s campaign is subsidizing too many of his meals and recreational activities – such as more than $11,000 at resorts and hotels, more than $900 at wineries and cigar shops and more than $15,000 at a Charles Town church and its gift shop since Mooney became a member of Congress in 2015.

“[M]any of them give the appearance of being for personal use, vacations or personal meals or personal benefits like cigars and wineries,” Columbia University professor and campaign finance regulation expert Richard Briffault said. “That would be an improper use of campaign funds.”

In August 2020, retired West Virginia State Tax Department worker Jerry Payne of Ripley submitted a complaint over Mooney’s campaign spending to the independent, nonpartisan Office of Congressional Ethics, which is charged with reviewing allegations of misconduct regarding House members.

“I just think they’re suspicious,” Payne said. “I don’t think you can account for them.”

“Congressman Mooney is cooperating fully with the inquiry into this matter,” Mooney campaign consultant Mark Harris told the Gazette-Mail on Friday.

In an email, Harris described the expenses as “routine” and “legitimate,” saying they legally constituted or supported fundraising efforts.

Concerns linger not only over Mooney’s campaign spending but over the Office of Congressional Ethics’ efficacy in holding lawmakers accountable. The office cannot issue subpoenas or impose or even recommend sanctions.

“It’s relatively rare for the Office of Congressional Ethics to take the step of initiating an investigation like this, so if that is happening, that alone is a good reason to think this spending pattern is concerning,” Jen Ahearn, policy director of the nonpartisan ethics watchdog group Citizens for Responsibility and Ethics in Washington, said in an emailed statement. “In other cases, we’ve seen versions of this type of conduct go so far as to be crimes, so it’s important that the investigation be thorough and that people cooperate with the investigators.”

It reported expenditures for all restaurants, gas stations and grocery stores within 30 miles of Mooney’s personal residence totaled more than $34,000, with Mooney reimbursed more than $15,000 for gas, food and travel expenses during that span.

“It certainly appears as if he is using campaign funds to commute routinely to Washington,” Payne’s complaint says.

Mooney’s home is located at the eastern end of his district, roughly 15 miles from the state line in Maryland, where he formerly lived; 325 miles from Charleston on the district’s western side; and 65 miles from the U.S. Capitol Building, where he works.

Harris indicated reported food expenses have been tied to fundraising or supported Mooney and his staff’s travel throughout the district.

Under federal law, campaign funds may be used to pay for meals during face-to-face fundraising events and the costs of travel to a campaign-related activity or for the candidate’s duties as a federal officeholder.

Payne’s complaint observed that the Mooney campaign spent a combined $3,946 at Advanced Auto Authority Services, an auto repair shop in Ranson near Mooney’s residence on two occasions in November 2018 and July 2019. Harris said the expense was for a campaign car.

The complaint noted a $169 expense from November 2018 categorized as “food/beverage” at the Smoking Head LLC, a Charles Town tobacco store. Harris said that purchase and other cigar and alcohol expenditures were fundraising-related.

St. Zita’s offers books, music and audio CDs, crucifixes and other items as well as gift cards for restaurants, grocery and hardware stores and gas stations.

“Given the specific amounts reported, it would appear that he may have been purchasing gift cards with campaign funds for personal use and to support his church,” the complaint contends.

Mooney’s campaign did not respond to an emailed question about the parish expenses.

The complaint called attention to a July 2017 expenditure of $48.17 at Shepherdstown Pedal & Paddle, a Jefferson County bike, kayak and canoe shop that the campaign finance report categorized as “office supplies.”

Harris said that expense was for preparing Mooney’s bike for a ride across his district, referencing a July 2017 tweet from Mooney’s Twitter account showing a photo of Mooney and a local businessman standing between a bike and a Lewis County road sign.

The complaint also alluded to $1,812 in expenditures at Hilton Hotel & Suites in Universal City, California, dated the day before and the Monday after Thanksgiving in 2018 and an $86 expense in May 2017 for “food/beverage” at Three Broomsticks, a Harry Potter-themed tavern at Universal Studios Hollywood.

Harris said the Three Broomsticks payment covered a meal with a campaign donor.

Briffault said the expenses raise “serious red flags” about whether they are being used for personal use.

Mooney’s campaign coffers, which already dwarfed that of West Virginia’s other two House members, swelled further in the most recent quarter largely due to out-of-state contributions.

A Maryland state senator from 1999 to 2011 and subsequent Maryland Republican Party chairman, Mooney saw his campaign raise more than $250,000 in total contributions in the quarter that ended June 30, most of the money coming from out-of-state individuals rather than West Virginians or political action committees.

That’s nearly as much as the campaigns of Reps. David McKinley, R-W.Va., and Carol Miller, R-W.Va., combined to collect last quarter, sharpening the Mooney campaign’s edge in cash on hand as the three Congress members eye a guaranteed elimination of one of their districts after the 2020 Census apportionment.

“We don’t elect you to use people’s money to have a good time,” Payne said. “Most people in our state, very few of them, will be able to fly to Universal Studios two times to go to Harry Potter World. Why would you fly all the way to California for a campaign conversation, or somebody donating money? What’s a person in California got to do with West Virginians?”

Because all investigations by the Office of Congressional Ethics are confidential, Payne, a Democrat, doesn’t know the status of the office’s review of his complaint – even after asking.

“If you’re corrupt, I don’t care if you’re a Democrat or Republican or independent, apply the law and investigate,” Payne said.

But the powers of the Office of Congressional Ethics are limited and being increasingly challenged by House members who won’t cooperate.

Created in 2008 after members of a congressional task force proposed an independent body in the House to increase accountability, the Office of Congressional Ethics conducts its investigations confidentially, referring them to the House Ethics Committee for further review when appropriate. In nearly all circumstances, cases the office sends to the House Ethics Committee are made public.

The eight-member board of directors that oversees the Office of Congressional Ethics decides whether to recommend that the House Ethics Committee review a matter or dismiss it. Board members are private citizens and are barred from lobbyist work, federal employment and running for federal office.

The House Ethics Committee, whose membership is divided evenly among five Democrats and five Republicans, can initiate its own investigation without a referral from the Office of Congressional Ethics and has the power to impose sanctions.

The House Ethics Committee must release Office of Congressional Ethics reports within 45 days unless the committee extends the period by another 45 days or establishes an investigative subcommittee.

A study released in March by the Campaign Legal Center, a nonprofit government watchdog group, found that members of Congress from both major political parties refuse to fully cooperate with ethics investigations, and the rate of cooperation with investigations made publicly available has declined in recent Congresses from 85% during the 111th Congress (2009-10) to 25% in the 116th Congress (2019-20).

The Campaign Legal Center has criticized Congress for not giving the Office of Congressional Ethics subpoena power.

The D.C. Circuit Court of Appeals ruled last year that a statute prohibiting obstruction of Congress does not apply to investigations conducted by the office, though the court ruled federal law prohibiting intentionally false statements applies to any congressional office investigation.

“The result of this system is that members refuse to cooperate with the OCE when it investigates many of the most egregious violations in Congress,” Campaign Legal Center staff said in an analysis published in March. “This is not what real accountability looks like.”

What’s at stake when campaign finance laws are violated, in Briffault’s view, are public trust in democracy and safeguards against plutocracy.

“People might give to the campaign because they want him to be elected, not because they want to support his lifestyle,” Briffault said. “Campaign contributions, they’re needed because otherwise you don’t have people with ordinary wealth being able to run for office. But there’s no value in public officials being able to solicit donations to their private pockets.”

After years of filing quarterly expense reports largely composed of spending at restaurant and gas stations near Mooney’s Charles Town residence, even during the COVID-19 pandemic, his campaign’s most recent reporting filed in mid-July did not list any expenses incurred at such establishments.

While Mooney’s campaign spending patterns evolve under the microscope following his complaint, Payne warily eyes what he sees as the bigger picture.

“If you’re not accountable, then you do whatever you wanna do,” Payne said. “If you come out here and [do] not have to be accountable to anyone, then you just abuse your authority as a congressperson.”

A Straight Smile Is A Healthy Smile