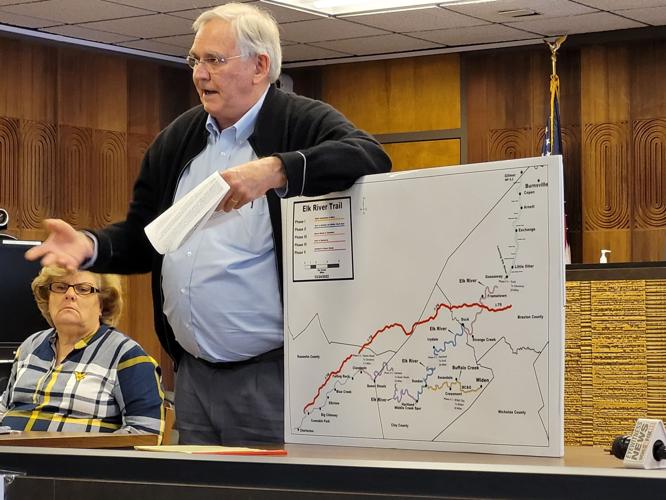 Resting his left arm on a map of the Elk River Trail, Elk River Railroad President Frank Jorgensen addresses a crowd mostly wary of his company’s push to complete the trail from Hartland to Queen Shoals at a recent Clay County Commission-hosted town hall meeting on the subject. 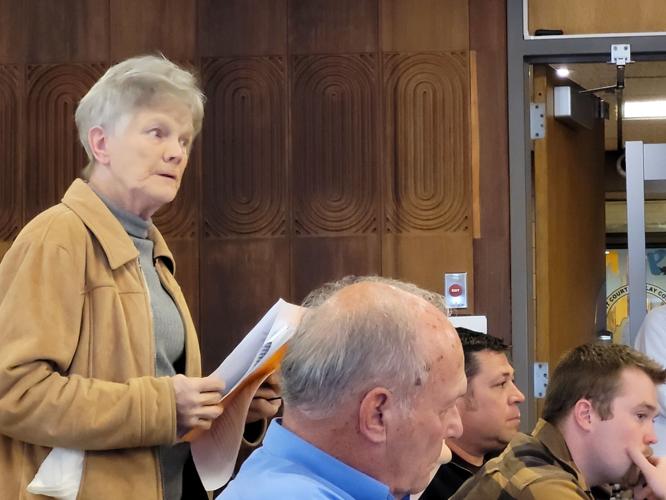 Procious resident Kathy Stephenson spoke out against Elk River Railroad, Inc. plans to complete the Elk River Trail from Hartland to Queen Shoals at a Clay County Commission-hosted meeting focusing on those plans at the county courthouse Monday. Stephenson and other residents argue that they own the rights-of-way along which the company plans to finish developing the trail. 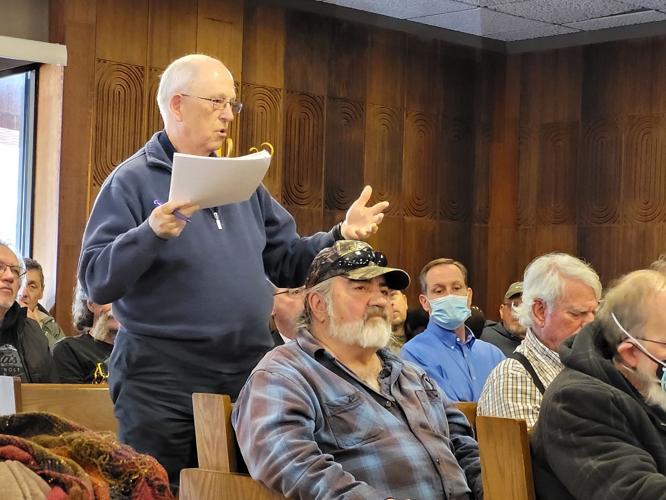 John Walker of Elkhurst said that the Elk River Railroad, Inc. and state officials risked raising "the misery index" for residents living along a 23-mile stretch from Hartland to Queen Shoals where the company plans to develop the Elk River Trail. Many residents in the planned trail segment say they own the right-of-way and fear losing their only access road to the project.

Resting his left arm on a map of the Elk River Trail, Elk River Railroad President Frank Jorgensen addresses a crowd mostly wary of his company’s push to complete the trail from Hartland to Queen Shoals at a recent Clay County Commission-hosted town hall meeting on the subject.

Procious resident Kathy Stephenson spoke out against Elk River Railroad, Inc. plans to complete the Elk River Trail from Hartland to Queen Shoals at a Clay County Commission-hosted meeting focusing on those plans at the county courthouse Monday. Stephenson and other residents argue that they own the rights-of-way along which the company plans to finish developing the trail.

John Walker of Elkhurst said that the Elk River Railroad, Inc. and state officials risked raising "the misery index" for residents living along a 23-mile stretch from Hartland to Queen Shoals where the company plans to develop the Elk River Trail. Many residents in the planned trail segment say they own the right-of-way and fear losing their only access road to the project.

CLAY — An ownership dispute spanning nearly 30 miles of a former railroad line is making the final phase of planned Elk River Trail development over that stretch a rough road for all parties involved.

Mangus was one of roughly 100 people packed into the Clay County Courthouse for a town hall meeting hosted by the County Commission to inform the public of plans to complete the trail along a 23-mile stretch from Hartland to Queen Shoals.

Nearly all of those who showed up were landowners wary of the trail developer, the Elk River Railroad Co., moving ahead with plans to complete the trail. They fear that the project will cut off or limit motorized access to their homes, endangering vital services and lowering property values while limiting motorized recreational opportunities for landowners and visitors.

“We want it open to car, Jeep, truck, ATV [all-terrain vehicle], bicycles,” said Mangus, who has been one of the most vocal opponents of trail development along the disputed segment.

Elk River Railroad plans to sell the old rail bed to become a segment of the Elk River Trail, operated as a state park by the West Virginia Division of Natural Resources.

Motorized vehicles, beyond a narrow category of electric bicycles, are not allowed along the trail, much of which already has been completed.

Elk River Railroad President Frank Jorgensen fielded questions from frustrated landowners. He tried to eliminate some of the uncertainty by assuring landowners that their road access would be preserved.

Landowners asked Jorgensen about a pledge in a paper handout he provided assuring “limited vehicular access” along the trail.

“We haven’t worked it out,” Jorgensen said.

The former rail bed is the only access road for residents.

Jorgensen said his company would present each adjoining landowner a specific plan for their “personal continued vehicular access,” a process expected to start by mid-to-late summer.

“If ... the state wants a trail, they need to share,” Loretta Cooper of Clendenin said.

‘We have lawyers standing by’

Many landowners contend that the planned trail path isn’t the Elk River Railroad’s to share. They say the railroad misled the state by wrongly claiming an ownership interest in the right-of-way past their homes.

Mangus and her sister and neighboring landowner, Kathy Stephenson, said 73 deeds along the disputed segment dating to the 1890s, when the railroad was originally constructed, state that the conveyance of land to the Charleston, Clendenin & Sutton Railroad was for building and operating a railroad.

Landowners say those purposes ended in 1978, when the Baltimore & Ohio Railroad Co. abandoned 28.75 miles of the line from near Hartland to near Clendenin under the authority of the Interstate Commerce Commission. That panel was the predecessor of the Surface Transportation Board, which regulates railroad service and rail restricting transactions.

Mangus and Stephenson argue that language spelling out conditions providing for right-of-way ownership interest to revert back to the original property owner isn’t necessary. Stephenson cited a 1991 West Virginia Supreme Court case in which the court upheld property owner rights by accounting for the historical circumstances of land use without basing its decision on reversionary language.

Jorgensen contends that reversionary language is required and reported that Elk River Railroad legal counsel is weeks away from completing a review of real estate records for the disputed section.

“Is the state prepared to pay us just compensation?” Procious landowner David Morgan said. “We have lawyers standing by that are willing to take this on.”

Landowners along the Queen Shoals-to-Hartland portion of the planned trail say they are tired of waiting in limbo to find out what their road will look like.

“We’re, like, on the sidelines,” Cooper said. “We need to know. We need this in stone, because our property values — we could have had campgrounds, we could have ... Little General stores, little snack shacks, but we can’t do that with the threat of a rails-to-trails coming through, prohibiting or restricting our vehicular access.”

Gerald Samples was hoping to set up a campground for RVs and campers on the 6.5 acres he owns near Camp Creek Bridge, on the railroad side of the river, to supplement his retirement income.

“What we really need is to keep access up and down through here open, put in these campgrounds, allow all these motor homes to come in and park,” Samples said.

Wallback-based real estate broker Cheryl White said uncertainty over the future of the planned trail segment is boxing in residents looking to sell their properties.

“I’ve had many opportunities to sell property on that trail, and I can tell you, out-of-state buyers are not buying,” White said. “The reason being is that they’re unsure about the access.”

Construction of the trail would reopen the market and raise property values, White predicted. But she expressed concern that limiting vehicular access could keep businesses from growing along the route.

“I do believe that there needs to be more organization between the state and Mr. Jorgensen’s railroad company,” White said.

Gov. Jim Justice and Elk River Railroad Vice President James E. Davis signed a letter of intent in April 2019 setting terms of a “future definitive agreement.” For $2.8 million, the West Virginia State Rail Authority would buy all rights and interests in the 54-mile stretch, plus 18 more miles of rail line right-of-way from near Clay to Widen, for the Buffalo Creek Trail.

The Governor’s Office said DNR representatives have provided consultation to Elk River Railroad regarding trail development and been apprised of matters regarding the Hartland-to-Clendenin section. But it’s the company’s obligation to resolve adjoining landowner concerns, the office said, adding that the state will take ownership once Elk River Railroad addresses title claims.

DNR spokesman Andy Malinoski did not respond to a request for comment.

The Surface Transportation Board dealt Elk River Railroad a setback recently by rejecting its notice of exemption to abandon 53.4 miles of rail line from near Clendenin to south of Duck. The agency said the notice did not merit the informal, streamlined process usually reserved for routine transactions.

The state’s letter of intent with Elk River Railroad includes a stipulation that the transaction be subject to Surface Transportation Board approval.

The Governor’s Office said Thursday it would not take title to the land until issues before the Surface Transportation Board are resolved.

Right-of-way at a crossroads

Jorgensen noted that the trail from Hartland to Duck is complete and operated by the DNR under a lease agreement as part of the Elk River Trail State Park. The Hartland-to-Duck portion will be sold to the State Rail Authority, Jorgensen said.

About 3 miles from the Queen Shoals bridge to the northern end of Clendenin is finished and open to the public. Jorgensen reported that the trail through Clendenin to its southern terminus at Brown Street will be finished later this spring, including 2.2 miles of trail in Clendenin.

Work is underway on a trail extension from Duck northward to Gassaway, which will be the northern terminus of the trail, Jorgensen said. Completion is expected by early May, Jorgensen said.

The Hartland-to-Queen Shoals segment is the final phase of the project. Elk River Trail Foundation President Ken Tawney said he is eager to see it completed.

Tawney alluded to a 2015 study by the Institute for Service Research, an economic impact research firm, that estimated the Greenbrier River and North Bend trails each generated $5 million in visitor spending in fiscal year 2015.

“You can laugh if you want, but that is what they concluded,” Tawney told skeptics in the crowd.

“The opportunities are there, if you want to look for them and take advantage of them,” Tawney said.

But many residents along the right-of-way feel they’re the ones being taken advantage of. They promise a long road ahead for trail development, if they can’t preserve a way home that still feels like home.

A chorus of no’s rang out after Mangus asked if anyone in the room would hesitate to take the dispute to court.

“If we have to take it to court to [prove] our right-of-ways, we will,” Mangus said.

Mike Tony covers energy and the environment. He can be reached at 304-348-1236 or mtony@hdmediallc.com. Follow @Mike__Tony on Twitter.