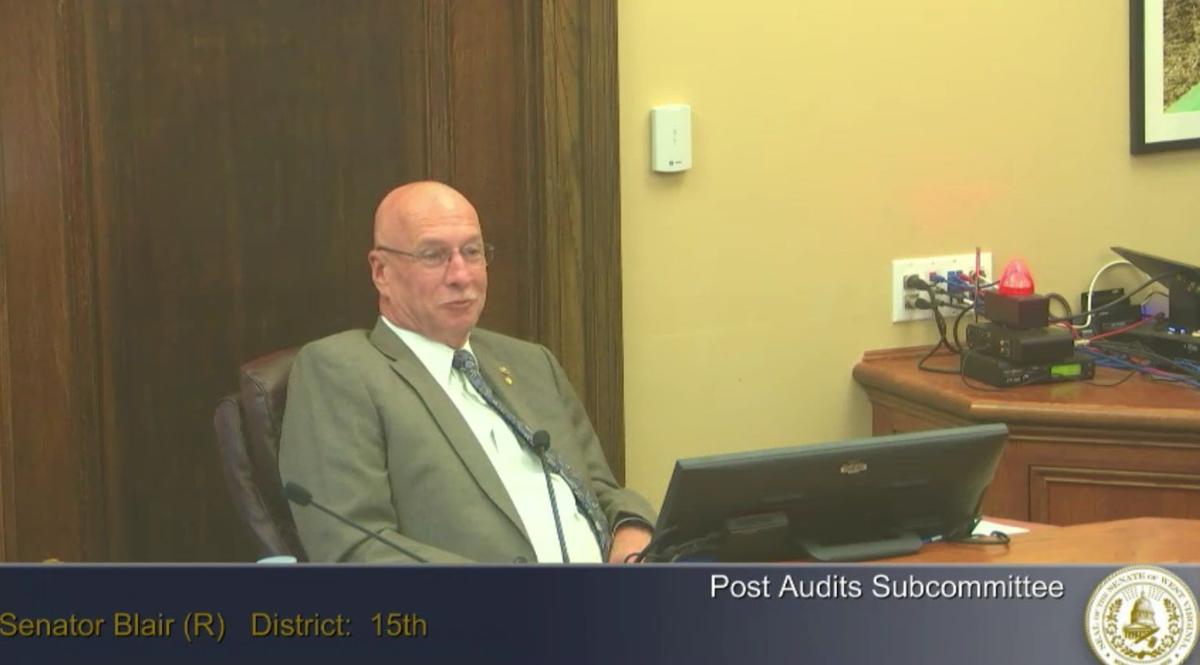 West Virginia Senate President Craig Blair, R-Berkeley, responded to the presentation of a state legislative audit recommending changes to the state’s oversight of West Virginia’s mine reclamation fund by suggesting the state use the audit report to lobby U.S. Sen. Joe Manchin, D-W.Va., and U.S. Department of Energy Secretary Jennifer Granholm for funding that feds have said is available for communities reeling from the nation’s transition away from fossil fuels. 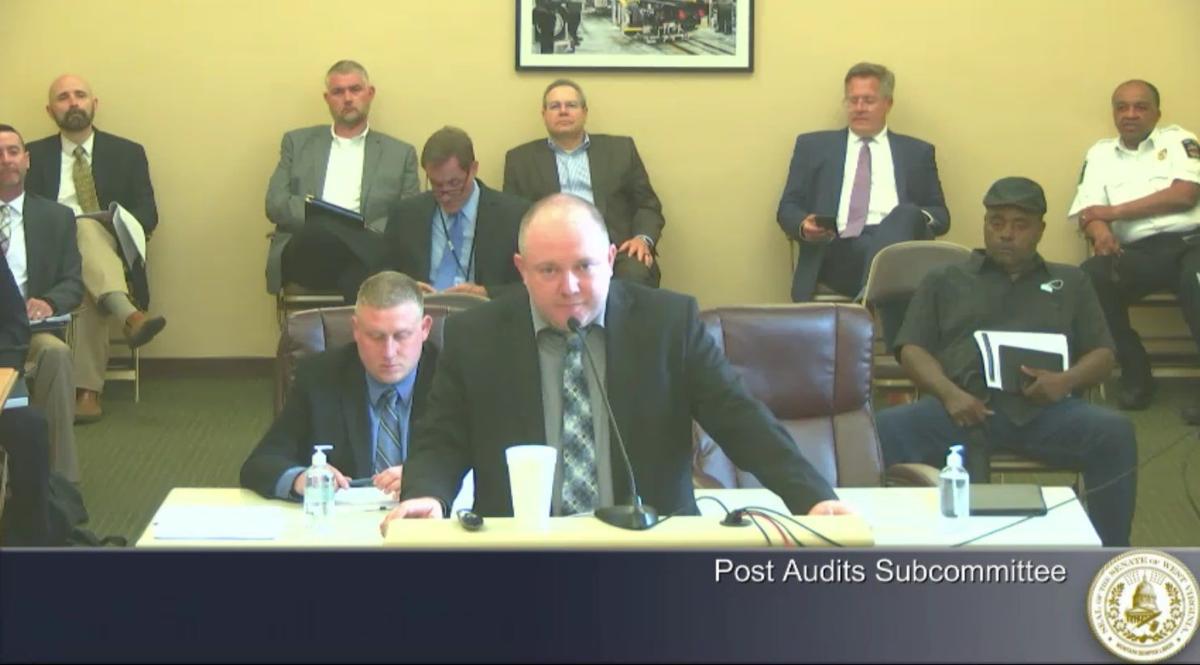 Legislative auditor Patrick Renick presents an audit of West Virginia’s mine reclamation fund to the state Post Audits Subcommittee Monday. The audit calls on the Legislature to commission a study to evaluate the state’s mining reclamation program.

West Virginia Senate President Craig Blair, R-Berkeley, responded to the presentation of a state legislative audit recommending changes to the state’s oversight of West Virginia’s mine reclamation fund by suggesting the state use the audit report to lobby U.S. Sen. Joe Manchin, D-W.Va., and U.S. Department of Energy Secretary Jennifer Granholm for funding that feds have said is available for communities reeling from the nation’s transition away from fossil fuels.

Legislative auditor Patrick Renick presents an audit of West Virginia’s mine reclamation fund to the state Post Audits Subcommittee Monday. The audit calls on the Legislature to commission a study to evaluate the state’s mining reclamation program.

Moments after West Virginia lawmakers received copies of an audit report warning that state mine cleanup funds are nearing insolvency, the Senate president sought to put the problem on someone else’s table.

“We need to be able to take your report and repackage it in such a way that we can actually put that on Senator Manchin’s desk,” state Senate President Craig Blair, R-Berkeley, said to Patrick Renick, the legislative auditor who spent 20 minutes Monday guiding senators and delegates through the 80-page report filed by the state Post Audit Division.

Blair recalled a meeting with U.S. Sen. Joe Manchin, D-W.Va., and Department of Energy Secretary Jennifer Granholm in Morgantown. The session highlighted $38 billion in federal funding that a White House-formed federal work group has identified as available for communities hit hard by the nation’s transition from fossil fuels.

“When they were asking how they could help,” Blair said, “I brought up this issue.”

But the report that Blair wanted on Manchin’s desk calls for West Virginia legislators and environmental regulators to fix the mine cleanup fund themselves, something they have put off for years.

In its 2017, 2018, 2019 and 2020 annual reports, the fund’s advisory council called for a legislative study of the reclamation program. The Legislature has conducted no such studies to analyze the program’s efficacy or solvency.

The state Department of Environmental Protection has shared in the lax state mine cleanup fund oversight, the audit found.

The agency has failed to comply with state and federal law in its reclamation program oversight, resulting in missed opportunities to financially shore up a program that will need hundreds of millions of dollars to reclaim permit sites under federal regulations.

Liabilities for permits issued before July 2019 will total nearly $500 million over the next 20 years, according to an actuary for the Special Reclamation Fund Advisory Council. The balance of special reclamation funds as of March 1 was about $190 million, less than 40% of the projected 20-year liability.

In a letter to West Virginia’s congressional delegation Friday supporting extension of the federal Abandoned Mine Land reclamation program set to expire Sept. 30, Gov. Jim Justice cited a DEP estimate that $4.2 billion is needed to eliminate the current inventory of abandoned mine land hazards across the state.

All the eggs in one basket

“It’s not just an issue of the region needing to look nice for new economic development,” said Savage, who studies mine reclamation as a senior program manager for Appalachian Voices, a clean energy advocacy organization with offices in Virginia, North Carolina and Tennessee.. “There are actual health and safety consequences with mines that are unreclaimed.”

A tax of 27.9 cents on every short ton of coal produced in West Virginia is supposed to be the main supplier of money for special state reclamation funding.

Coal companies holding inactive permits are required to maintain bonds equal to estimated reclamation costs, but the DEP doesn’t enforce the stipulation, according to auditors. The agency accepts awards that reduce coal companies’ bonding amounts at the reclamation fund’s expense. The DEP also has ignored its own policy by approving permit applications for companies with reclamation tax delinquencies.

“I think there are versions of all of these issues present in every state,” Sierra Club senior attorney Peter Morgan said.

“We always knew, sort of by design, West Virginia’s bonding program has surety bonds [that] only cover a percentage of the actual reclamation cost,” Morgan said. “But it’s supposed to be a much greater percentage than 10%.”

Rising reclamation costs have devalued permit bonds since state code established current bonding limits in 2001. Bonds are set at $1,000 to $5,000 an acre.

Current bond limits aren’t enough to cover the escalating cost of reclamation, placing state reclamation funding at risk of insolvency, the audit says. There is no sign of contingency plans if funds become insolvent, according to the audit.

Insolvency could result in the federal Office of Surface Mining Reclamation and Enforcement revoking its approval for West Virginia to adjust its surface coal mining program and pass state-specific legislation, the audit cautioned.

Unlike other states, West Virginia has no statutory limit on the amount of reclamation surety bond coverage a company may issue either in the case of individual bonds or in aggregate.

“There should be a cap,” Morgan said. “Basically, you’re just trying to prevent having all your eggs in one basket.”

Of the 27 coal companies with at least $4 million in Indemnity surety bonds, 22 had past bankruptcies or bought permits held by bankrupt companies, according to the audit.

Indemnity held $125 million in reclamation bonds for ERP Environmental Fund, a coal mining company operating in West Virginia. Then ERP laid off all its employees and management as of March 2020 and ceased operations, leaving its mines abandoned and public health and safety threatened, according to a DEP lawsuit seeking to appoint a special receiver to assume ERP’s responsibilities.

But from March 2020 to March 2021, the DEP approved Indemnity’s bond issuances from $450 million to $620 million, even after seeking a special receiver.

Just one forfeiture could leave the special reclamation funds insolvent, the audit found. The risk increases if one or more surety companies fail to pay bond obligations to the DEP.

The audit questions the DEP’s acceptance of reclamation awards that can reduce the amount of bonding required to obtain mining permits.

The awards are not monetary but are factored into bond amount calculations and are given by public and private organizations to coal operators that employ exemplary reclamation techniques.

But since the DEP doesn’t keep a complete record of bond reductions stemming from reclamation awards, the total amount of reductions resulting from the program is unknown.

Reclamation awards might be used indefinitely, and one award may be applied across all sites owned by the company that received it.

The audit’s review of individual permits identified 52 companies with at least $14.4 million in active bond reductions among 233 permits with a total of 533 reclamation bonds, yielding an estimate that reclamation bonds could potentially be reduced by $85.7 million via reclamation awards.

“The primary responsibility of DEP should be making sure that the communities who live near these mines aren’t going to have to deal with unreclaimed or inadequately reclaimed sites,” Morgan said. “The reclamation awards program is just another way of regulators failing to require industry to do as much reclamation as possible.”

From 2009 to June 2020, on 138 occasions, West Virginia environmental regulators approved applications for mining permit issuances, renewals or revisions for companies with reclamation tax delinquencies, according to the audit. That violated the agency’s own policy of withholding approval of new or revised mining permits for applicants with reclamation tax delinquencies.

Savage said West Virginia and other state agencies are reluctant to deny permit applications on the basis of unpaid taxes and outstanding violations.

“But I think it’s important that they do so, not just to be proper enforcement, but at this point, if a company is not paying their taxes, that’s probably indicative of the health of the company,” Savage said. “So if the company is not doing well, why would you allow them to get more permits or continue mining and increase their reclamation liability beyond what they already have?”

The DEP also grants permits to coal companies with mine safety fine delinquencies, even though the state Office of Miners’ Health, Safety and Training blocks permit extensions and new permits for companies delinquent in paying those fines.

DEP spokesman Terry Fletcher said the Division of Mining and Reclamation is not required by statute to consider worker safety-related violations or their associated civil penalties. He cited a statute that refers to violations of “environmental laws and rules” as the basis for denying a surface mining permit.

“These companies are supposed to have a contract in the general sense, not the legal sense, with the state regulators and the communities they’re working in to meet all of their obligations,” Morgan said. “DEP’s minimum job needs to be to make sure that companies are satisfying that end of their contract and meeting all of those obligations.”

In its response to the audit’s findings, the DEP largely defended its practices while adding that only the Legislature has the statutory authority to implement auditors’ recommendations like changing bonding rates and capping bond amounts that a single surety can underwrite.

“I did not read DEP as providing any sort of a … conducive response to the general premise of the audit that there are major shortfalls and that the Special Reclamation Fund is at significant risk,” Morgan said.

The risk is likely to rise as the coal industry’s decline deepens, elevating the importance of federal investment in days to come as coal company setbacks test West Virginia’s state reclamation fund, environment and patience.

The evening brought the death of James Simpkins, 73, after a silo his company was hired to demolish at a former Boone County mine collapsed on an excavating machine he was operating.

In between, the DEP held an informal conference to collect public input on Republic Energy LLC’s request for renewal of a permit to continue a steep-slope mining operation on Coal River Mountain in Raleigh County.