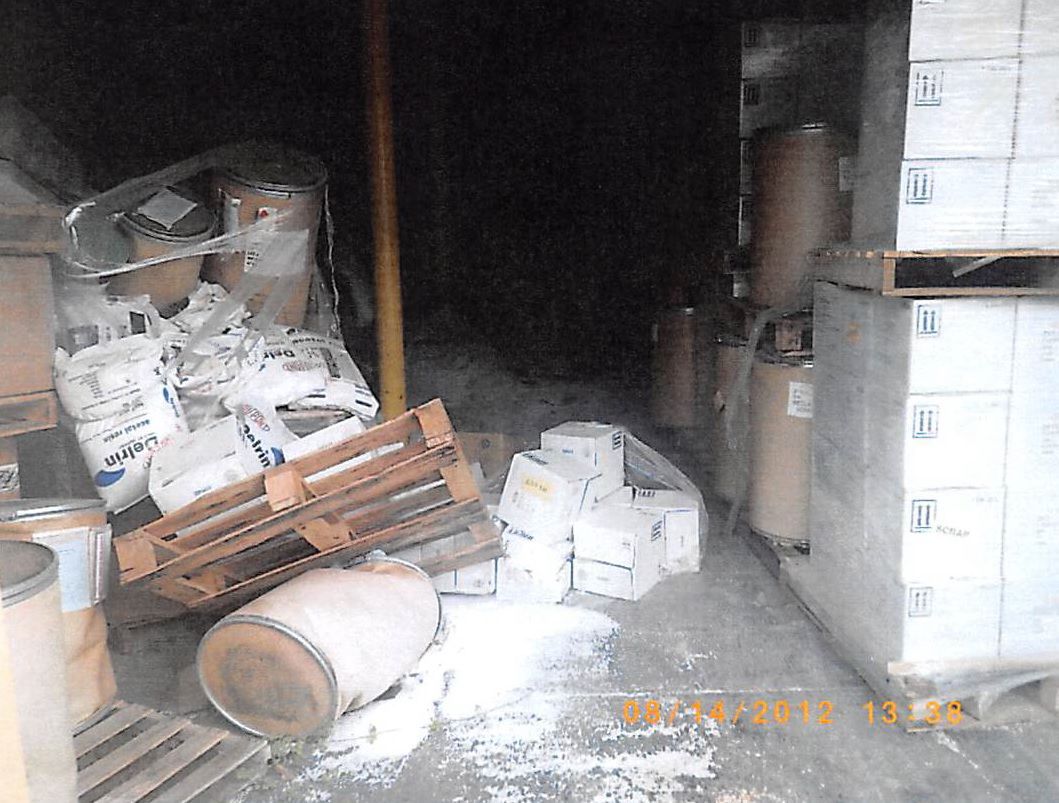 Inspectors from the Department of Environmental Protection who visited the Parkersburg warehouse labeled this photo "poor housekeeping." 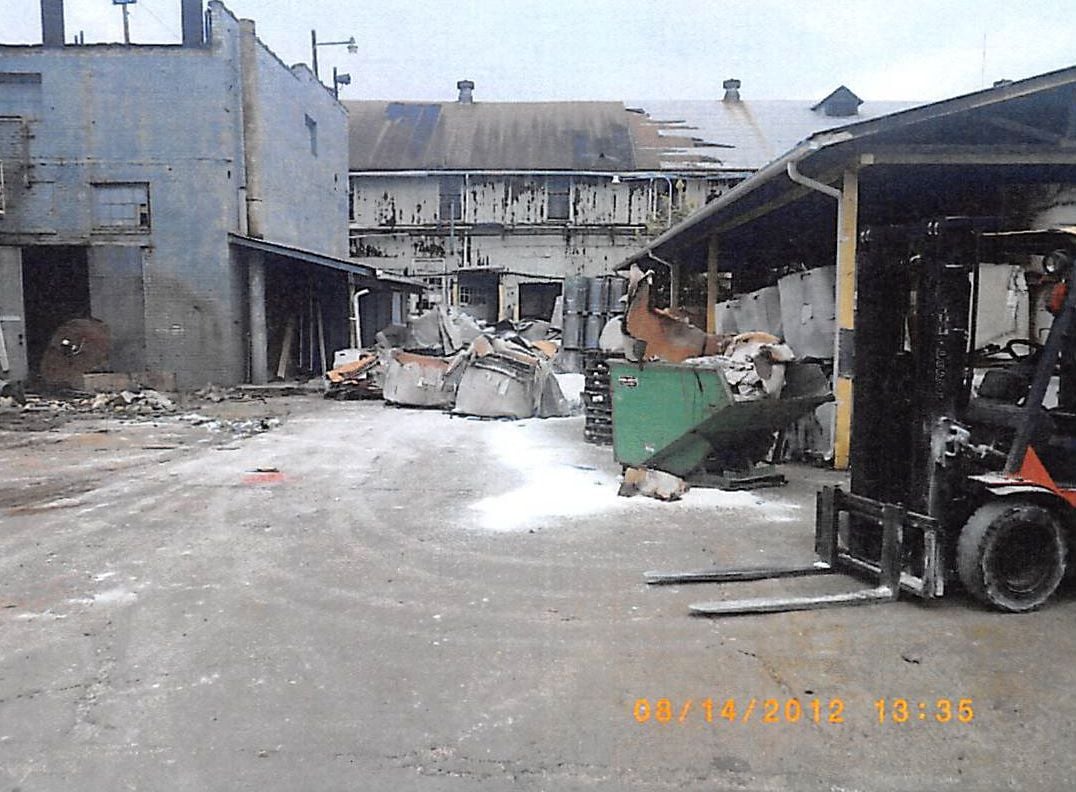 DEP inspectors who visited the warehouse in 2011 and 2012 found problems similar to those identified by the state Fire Marshall in 2008.

Inspectors from the Department of Environmental Protection who visited the Parkersburg warehouse labeled this photo "poor housekeeping."

DEP inspectors who visited the warehouse in 2011 and 2012 found problems similar to those identified by the state Fire Marshall in 2008.

Two volunteer fire chiefs in Wood County warned nearly a decade ago that they had “extreme concerns” about the potential for a major fire at one of the local warehouses being used to store large amounts of plastics and unknown other products from area chemical plants, state records show.

The fire chiefs from departments in Lubeck and Washington Bottom specifically complained to the state fire marshal about a long list of problems at the warehouse, which has been burning since early Saturday. The inferno has created serious local concern about air quality, along with fears about the growing cost of fighting the blaze and cleaning up the mess certain to be left behind.

In a strongly worded letter accompanying a formal complaint, Chiefs K.C. Linder and Mark Stewart urged the fire marshal to conduct a surprise inspection of the warehouse at the former Ames Tool Plant, in Parkersburg, and a second facility owned by the same company — Intercontinental Export Import Inc. — located in nearby Washington. The fire chiefs indicated that they feared a massive fire they wouldn’t be able to contain, citing a variety of dangerous conditions, from several hazardous materials to the lack of adequate water service for firefighting and stacks of products blocking access to exits and aisles.

“Hazardous materials are stored randomly throughout the warehouse in unlabeled storage containers,” said the July 28, 2008, letter from Linder and Stewart. “These are scattered throughout the building.”

Linder and Stewart wrote that they had “extreme concerns for the safety of our firefighters if called to mitigate emergencies in these warehouses.”

They recalled responding to a recent fire at the Parkersburg warehouse and not being able to access the blaze because of “boxes stacked up along the exterior of the warehouse, closing the alley.”

“We were trying to keep something like this from happening,” Stewart, whose department is among the many first responders who have been working since Saturday to handle the warehouse fire, said in brief interview Tuesday afternoon.

Stewart said crews on the scene are finding some of the same problems they were worried about in 2008, such as unlabeled containers of material stored at the warehouse.

The fire chiefs especially were concerned that there would be a major fire at one of the warehouses and there would not be even enough water for a “defensive” mode of firefighting, or one that sacrifices a building to isolate the situation and ensure it doesn’t get any worse.

“We do plan to fight these defensively at this time, because we do not feel the structures are safe enough to send firefighters into,” the letter said. “The biggest concern, though, is for the firefighters’ safety. Boxes stacked too high, and inefficient sprinkler could kill firefighters working interior.”

The chiefs’ letter is stamped as having been received by the state Fire Marshal’s Inspections Division on July 28, and state records indicate that Inspector Norman Fetterman was dispatched to the warehouse two days later, on July 30, 2008.

A one-page report of Fetterman’s inspection indicates that he found some of the fire chiefs’ concerns were justified. Exits were blocked “throughout the warehouse,” the inspection report said. A dumpster was blocking a fire hydrant. Aisle space needed to be cleared to comply with the fire code. The company was ordered to, within 15 days, submit a plan to correct the fire code violations cited.

In an Aug. 22, 2008, letter to Fetterman, Jeff Schmitt, then a manager of a company called Polymer Alliance Services LLC, said it had been “working on correction everyday since you were here.”

“As far as your list, everything will be done in 30 days,” the letter said. “Thank you for your time that day. It’s good sometimes to have a separate set of eyes to see things that people working around it every day don’t see.”

Polymer Alliance Services and Intercontinental Export Import are part of the “SirNaik group of companies,” according to their websites. SirNaik bills itself as a “waste management” company with offices in Columbia, Maryland. No one from the company has returned phone calls seeking comment about the fire.

DuPont Co. has said it is not affiliated with the former Ames facility warehouse but that IEI purchased products from its nearby Washington Works plant and was storing them there. It has not been made entirely clear exactly what materials were kept in the warehouse at the time of the fire.

Warehouses “present special challenges for fire protection because their contents and layouts are conducive to fire spread and present obstacles to manual fire suppression efforts,” according to a January 2016 report by the National Fire Protection Association.

“Warehouses pose substantial challenges for fire protection due to their building layouts, storage configurations and technologies, ceiling heights, and types of commodities stored, with the specific challenges influenced by the characteristics of a given warehouse,” the report said.

In their 2008 letter, Linder and Stewart recalled that, when the Lubeck department responded to a recent fire at the warehouse, the facility’s sprinkler system “was not functional and in disrepair.”

Lawrence Messina, communications director for the West Virginia Department of Military Affairs and Public Safety, which includes the Fire Marshal’s Office, said that, when the agency inspected that warehouse in 2008, the sprinkler system was tested and found to be operational. Investigators are still trying to determine the status of the sprinkler system at the time the current fire started, Messina said.

The last inspection of the warehouse by the Fire Marshal’s Office was in 2008, Messina said.

“A full investigation of this fire and its cause remains ongoing,” Messina said. “No cause is being ruled out at this time.”

Records from the state Department of Environmental Protection show that DEP inspectors who visited the warehouse in 2011 and again in 2012 found some of the same kinds of problems outlined by the fire chiefs and discovered by the fire marshal inspection in 2008.

For example, DEP inspectors found that “good housekeeping was not being maintained” at the warehouse. They also found that the company had not developed and implemented a groundwater protection plan that “included materials stored at the site.”

Photos included in the DEP records show piles of material outside the warehouse, more “poor housekeeping,” and photos from August 2012 referenced yet another fire at a separate nearby IEI warehouse referred to as “Plant No. 2.”