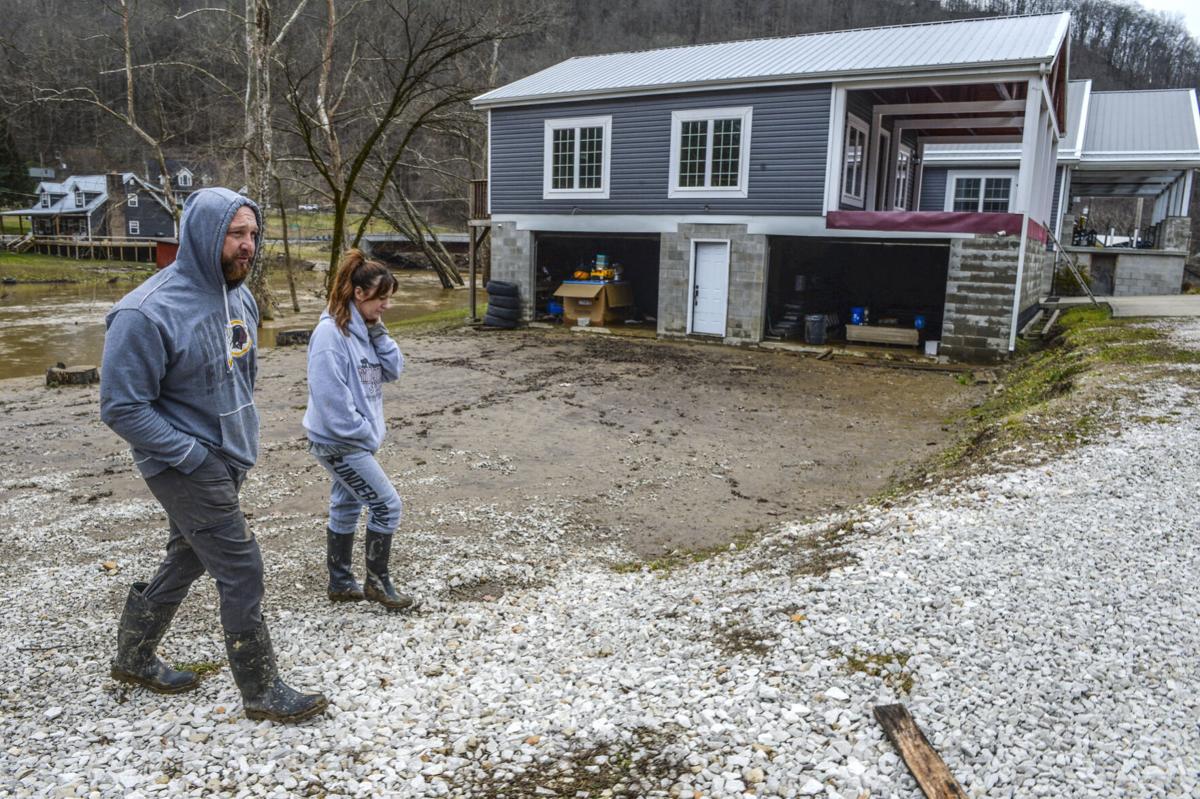 Warren (left) and Alicia Browning take a break from cleaning the basement of their home, near Lenore, Monday afternoon. Pigeon Creek began flooding into the home shortly after midnight. 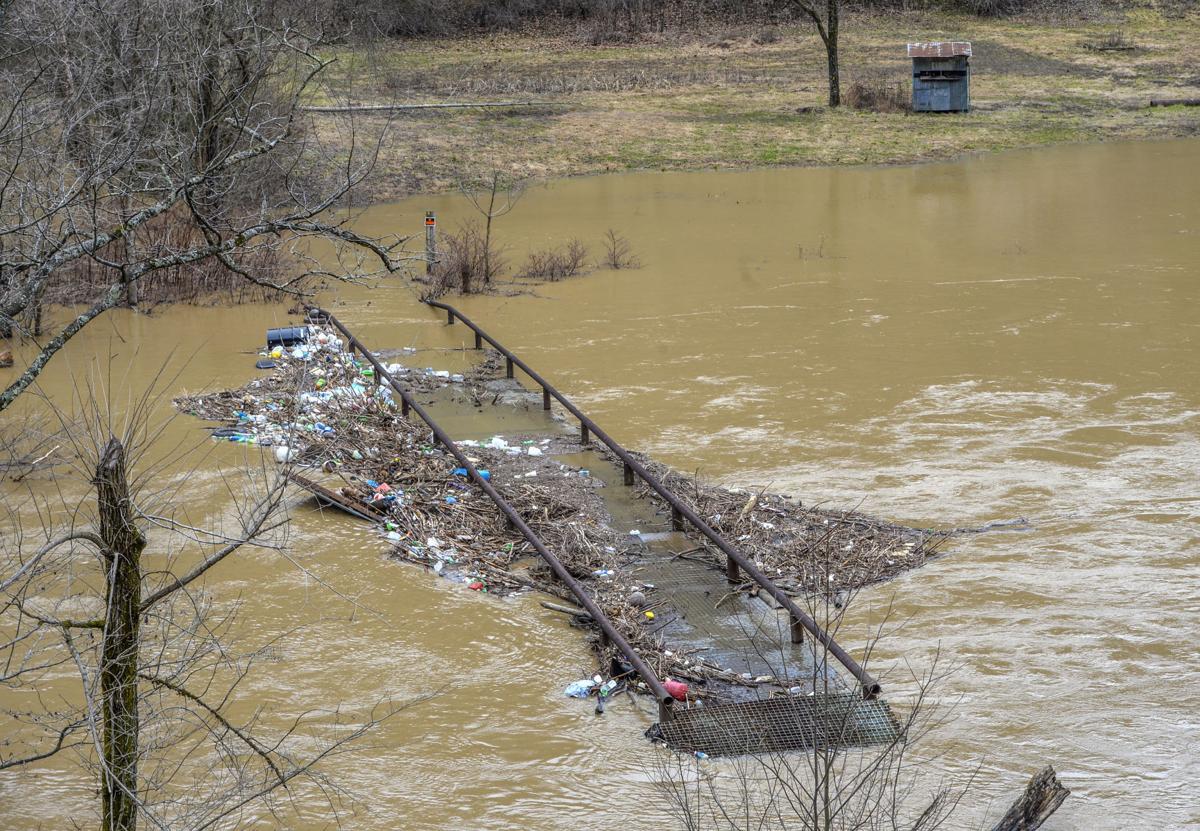 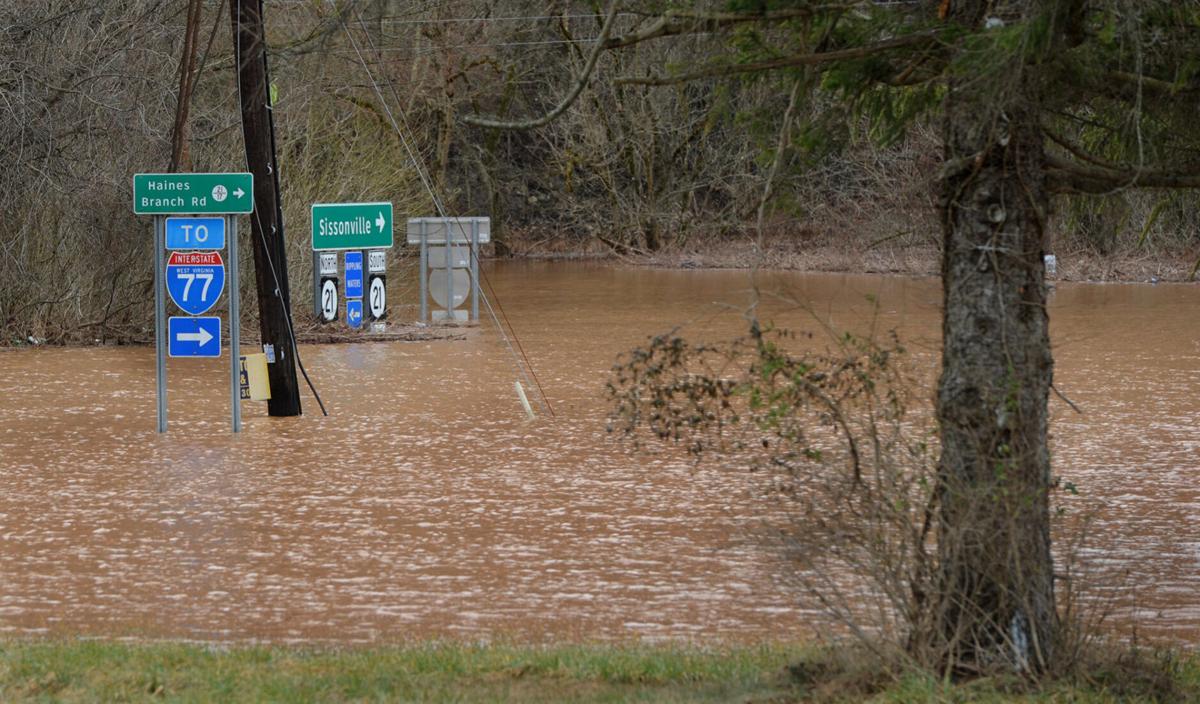 The Haines Branch exit off of Interstate 77 North is flooded by high water Monday. 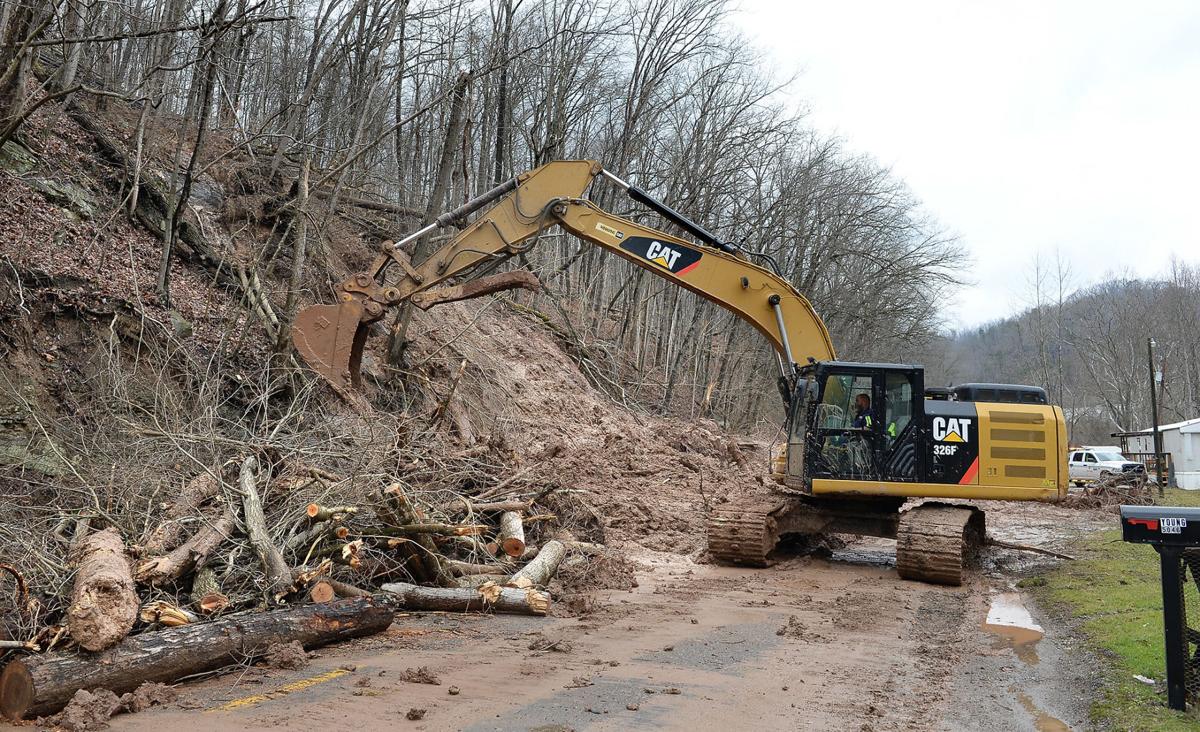 A crew with the state Division of Highways worked to clear mud and trees from U.S. 119, just south of Elkview, Sunday.

Warren (left) and Alicia Browning take a break from cleaning the basement of their home, near Lenore, Monday afternoon. Pigeon Creek began flooding into the home shortly after midnight.

The Haines Branch exit off of Interstate 77 North is flooded by high water Monday.

A crew with the state Division of Highways worked to clear mud and trees from U.S. 119, just south of Elkview, Sunday.

High water damaged homes and temporarily blocked traffic on at least 80 roads and bridges across West Virginia on Monday, leaving thousands of people isolated but causing no deaths.

Three to 4 inches of rain fell across many of the state’s southwestern, western and central counties Sunday night and early Monday, on soil already saturated by earlier rains and melting snow and ice accumulations. Most of the remaining counties received 1.5 to 3 inches of rain.

The Coal River in western Kanawha County, the Tug Fork at floodwall-protected Williamson in Mingo County and the Guyandotte at Branchland in Lincoln County each rose about 4 feet above their banks, making them capable of producing “moderate” local flooding, according to the National Weather Service.

Light local flooding was made possible by the Greenbrier River at Alderson and the Meadow River at Hines, both in Greenbrier County, rising more than 2 feet above flood stage, and the Cheat River at Parsons in Tucker County topping its flood stage by more than a foot.

As water rose in the Greenbrier River and smaller area streams during the predawn hours Monday, emergency services personnel in Pocahontas County called for a voluntary evacuation of Marlinton and set up an emergency shelter in Marlinton Middle School. But by 10 a.m., when floodwaters began to ebb, the evacuation alert was lifted.

According to West Virginia Office of Emergency Management public information officer Laura Lipscomb, no other evacuations were called for, and while a number of homes and businesses were damaged by high water, there were no reports of any being destroyed.

Among those with homes damaged in Monday’s flooding were Warren and Alicia Browning, whose recently remodeled and upgraded 110-year-old house along Pigeon Creek began taking in water shortly after midnight.

“For some reason, I got up at about 11 p.m. to check how high the water was and saw that it sure wasn’t going down,” Warren Browning said.

The couple spent the next six hours in their basement and yard, where they moved materials and tools for their roofing business, household goods, appliances and a camper trailer to higher ground or upper levels of their house.

“We strapped our metal roofing onto a trailer, so we still have it, but all but the top few sheets were below water” at one point, Browning said. Adding an 18-foot wall of fill to the area between his house and the creek apparently did little to prevent floodwater, which rose about 3 feet up the side of the home’s basement, from causing damage.

“It was scary,” Browning said. “Our friends across the creek went to sleep and didn’t know that it was flooding. We woke them up, and we all stayed up for the rest of the night.”

Others nearby also spent the night moving what they could to safety and watching the creek rise.

At one point during the night, “you could see so many flashlight beams moving around, it looked like people were spotlighting deer,” Browning said.

But by 5 a.m., he said, most of the more important items had been secured, and he and his wife, worn out from the struggle, decided they would leave the fate of what they hadn’t gotten to yet to the stream.

“Now, it’s time for clean-up,” he said, as he and his wife shoveled mud from their basement.

While several volunteer fire departments performed whitewater rescues at locations across the state Monday, mainly in incidents involving drivers being stranded in their vehicles in the high water they attempted to cross, there were no reports of fatalities, Lipscomb said.

Emergency crews hauled drinking water to sites that lacked it in Roane and Clay counties, but otherwise, “there were no other counties needing resources,” Lipscomb said.

“The Office of Emergency Management will continue operating on a 24-hour basis as we keep watch on water levels in the larger rivers,” she said.

The Ohio River at Point Pleasant reached its flood stage of 40 feet at 4 p.m. It was projected to crest late Tuesday.