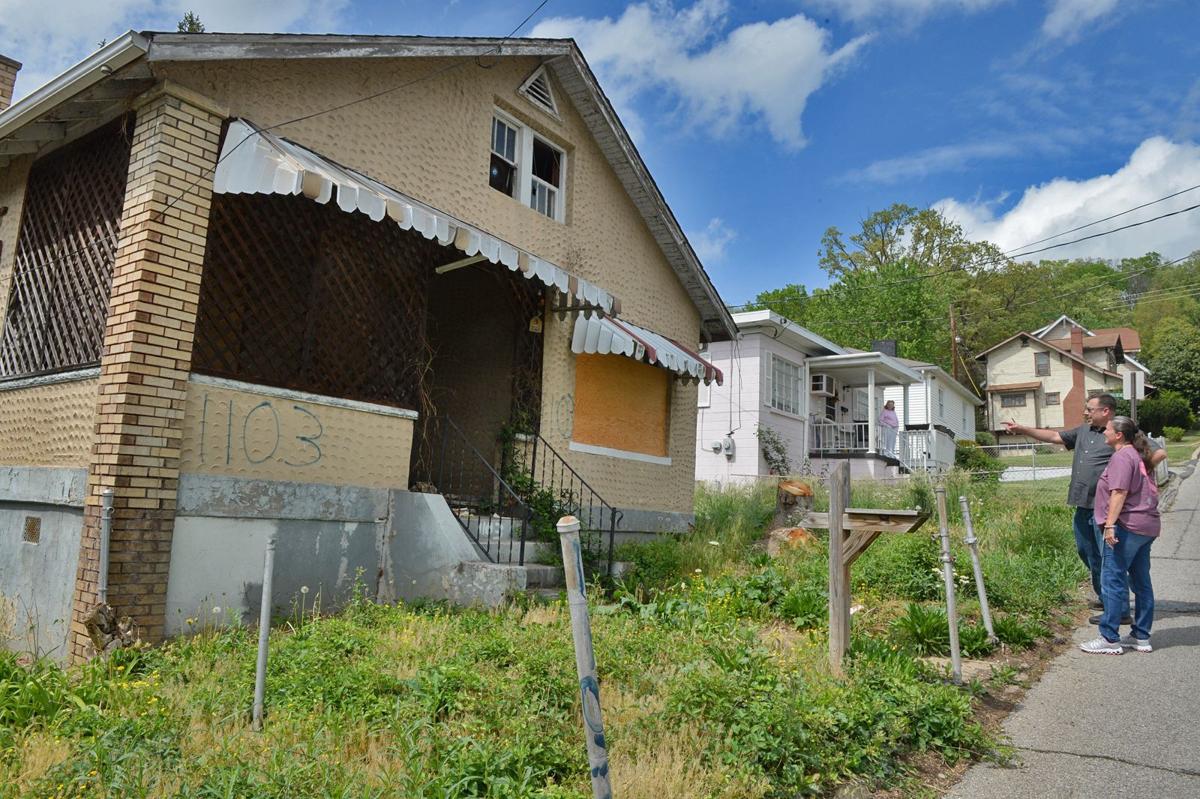 Charleston property maintenance inspectors Ron Coon and Cheryl Gaynor discuss upkeep issues outside a Hunt Avenue home that's been vacant for years. Because the deceased owner didn't name an heir to the property, the Building Commission doesn't have the authority to demolish it, Coon said. 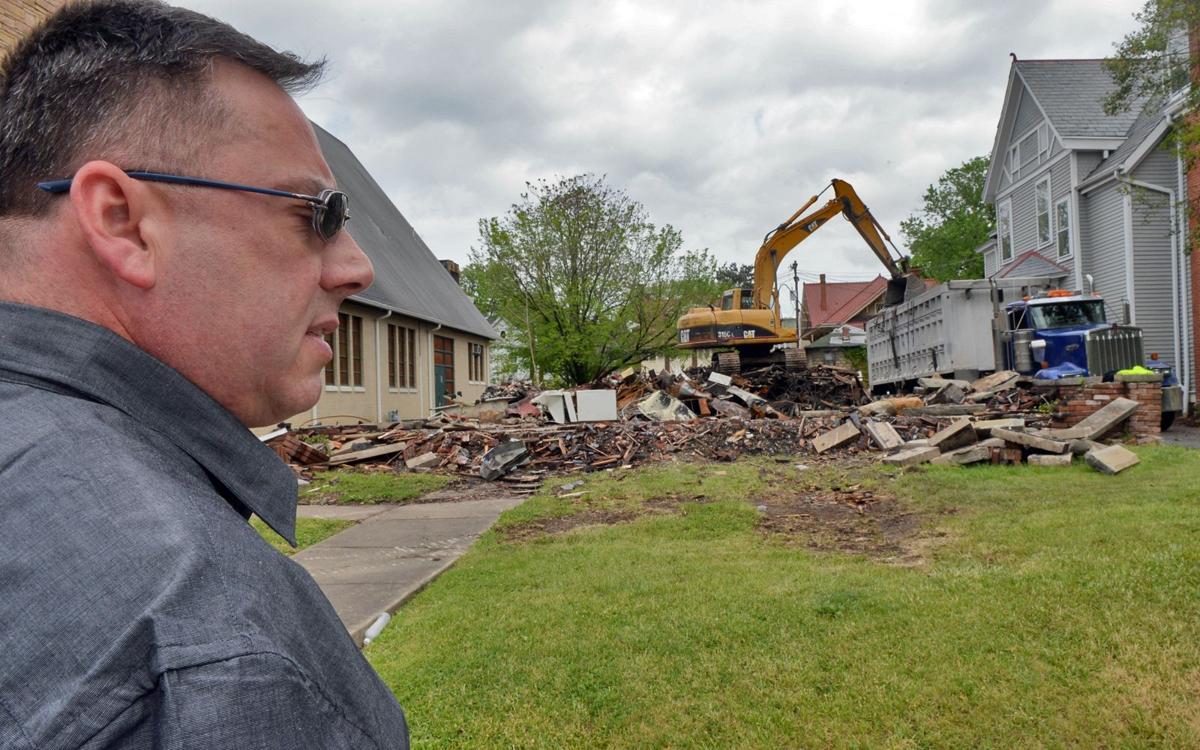 Charleston property maintenance inspector Ron Coon discusses the demolition of the former Capital Paging building on Kanawha Boulevard. The historic building had been vacant for several years and was occupied by vagrants at the time the fire was set. The fire is being treated as an arson, though no arrests have been made. 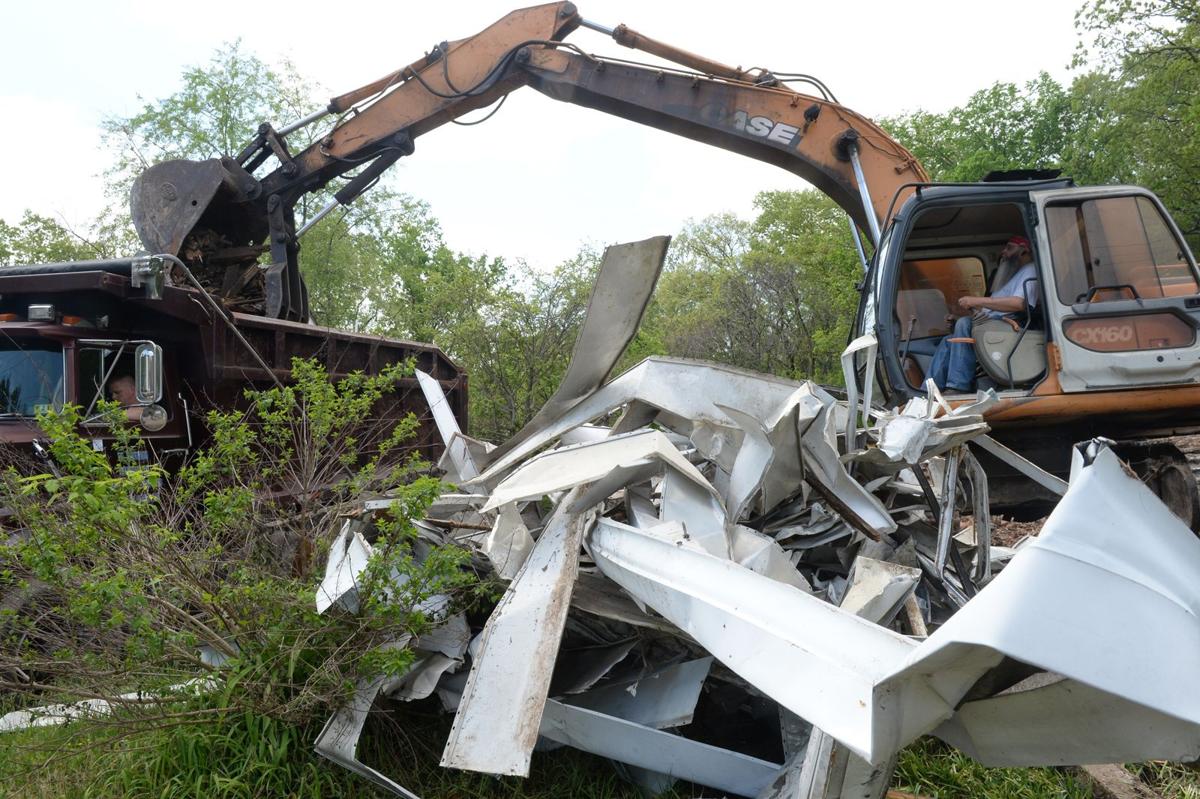 Crews work to salvage any scrap metal that can be recycled from a demolished home on Burlew Avenue. The house collapsed over the winter, but the Building Commission couldn’t raze the structure until it got consent from the owner.

Charleston property maintenance inspectors Ron Coon and Cheryl Gaynor discuss upkeep issues outside a Hunt Avenue home that's been vacant for years. Because the deceased owner didn't name an heir to the property, the Building Commission doesn't have the authority to demolish it, Coon said.

Charleston property maintenance inspector Ron Coon discusses the demolition of the former Capital Paging building on Kanawha Boulevard. The historic building had been vacant for several years and was occupied by vagrants at the time the fire was set. The fire is being treated as an arson, though no arrests have been made.

Crews work to salvage any scrap metal that can be recycled from a demolished home on Burlew Avenue. The house collapsed over the winter, but the Building Commission couldn’t raze the structure until it got consent from the owner.

If derelict properties were a disease, much of Charleston would be quarantined.

Charleston's Building Commission is finally enforcing an ordinance, passed by City Council in 2014, which addresses the vacant buildings peppered throughout the city.

The law requires owners of empty structures to register them with the Commission. The office has since compiled a database of nearly 500 properties around the city.

Vacant building registries are catching on in the Mountain State as a way cities can keep tabs on unoccupied buildings before they fall victim to vandalism, vagrancy and arson.

But the Charleston Building Commission still faces numerous problems in applying the law.

From deceased owners to demolition restrictions and fickle tax-sale investors, it's unclear whether the vacant structures ordinance has the teeth to make a long-term impact.

On a muggy April afternoon, Ron Coon, an inspector with the Building Commission, drives through neighborhoods with the most abandoned homes in the city.

The majority of shuttered properties are residential and lie in wards 1 through 4.

“The worst parts aren't in the flats — they're in the hills,” he says.

Coon stops his car in front of an empty home in the 1000 block of Hunt Avenue in Ward 3.

Weeds and thistles choke the front yard where a weather-worn post sits without a mailbox. Vines wind up the front steps to a trash-scattered porch.

The front door and windows are covered with plywood. Someone hastily spray-painted the house number onto its exterior.

But the home's foundation, Coon says, is solid.

The owner died a couple of years ago and didn't leave the home to any heirs.

“Eventually, the county will sell it for taxes,” he says.

“Looking at the outside, it's probably a rehabable structure right now. In another half-dozen years, it probably won't be.”

The story is all too familiar for the Building Commission.

When a homeowner dies and doesn't name any heirs to their property, the commission is powerless — and the ordinance is futile.

When a building remains vacant after one year on the registry, the commission charges the owner a $250 fee.

The fine increases by $250 for each year the structure stays on the registry. If the owner's balance reaches $1,000, the commission may file a lien on the property.

Since November, the city collector's office has received $4,750, or 19 payments, from more than 250 fines it sent to property owners.

The system is meant to encourage owners of blighted properties to sell, demolish or renovate them, Building Commissioner Tony Harmon said.

“We're trying to get it to where the public can access the list. There's a good possibility that someone could find a property they're interested in,” he said.

From 2006 to 2015, the building commission demolished 463 residences and 109 commercial structures.

With the registry now in place, Harmon hopes to see up to 100 buildings removed from the list annually.

The Mayor's Office of Economic and Community Development allots funds to the Building Commission for demolitions, but Harmon must ask for additional money each year.

A recent budget amendment added $20,000 more to the demolition fund for a total of $210,000 assigned this year, said Brian King, the office's director.

Several exemptions exist under the ordinance, such as a building that's being actively marketed, is government owned or is at least 15 percent occupied.

(On our app? See story with map here)

Amid Charleston's dwindling and aging population, homeowners often leave the state without notifying the city or die and leave the property to their heirs.

“Their kids often have moved away already, and after years of sitting there, it becomes dilapidated,” Harmon said. “This happens quite often — there's no one to take over the property, or the family says, 'This house is obsolete, it's not worth it.'”

In November, a two-story home at 511 Ohio Ave. fell victim to arson.

Kimberly Munoz, who had been squatting in the house with several others, allegedly set the fire after being forced to vacate earlier that day by Kanawha County Sheriff's deputies, said Matt Lanham, a lieutenant with the Charleston Fire Department.

Munoz was arrested and charged with first-degree arson, Lanham said, and the house was declared a total loss.

Two weeks later, the same group of squatters accidentally set fire to the house at 513 Ohio Ave. They simply moved next door to the nearest empty house.

Vagrancy, particularly in vacant buildings, is “one of our biggest problems in Charleston,” Lanham said.

“Homeless people go into abandoned houses, and it turns into a drug house.”

The owner of 513, who asked not to be named, said she doesn't know if she'll have the house demolished or renovated.

When a house has fire damage, “we have to go out and do an inspection of the structure to assess how bad the property is,” Harmon said.

Unless Harmon determines the home poses a clear safety hazard, the commission must first identify and get consent from the owner before it can tear down a building. It doesn't have eminent domain rights.

“If we can't get the owner contacted, then we're kind of stuck,” Harmon said.

Investors frequently purchase the liens on such homes at annual tax sales held by the Kanawha County Sheriff's Office, where the minimum bid is the amount of overdue property taxes.

Paying as little as a few hundred dollars, a purchaser must wait 18 months before taking the title to give the owner a chance to repay the delinquent taxes.

During that time, the investor collects one percent interest each month on their purchase that can only be collected if the property is redeemed.

Local attorney Bob Johns is well acquainted with the process.

At least five limited liability companies registered with the Secretary of State's website list Johns' home address, or Turner and Johns, the firm where he works, as the primary office for those companies.

Johns is listed as the notice of process address and member of several LLC's that frequently buy delinquent property at tax sales, such as NAJ, LLC., MATO Investments, P&J Real Estate and Stebec, LLC.

He said most investors at tax sales purchase multiple properties at once — often without seeing them first.

Nearly 25 blighted properties on the building commission's registry are owned by LLC's with which Johns is involved.

He doesn't think the $250 fine will effectively coerce people into addressing the vacant properties they own.

“It's just adding to the cost of renovation,” he said.

“Many of the properties we fix up and either sell or rent them,” he said. “That depends on the nature of the property, and how much it would cost to fix them up.”

When a building is in bad enough shape or requires more money to renovate than its assessed value, “a lot of times, we sell it to someone who feels they can fix them up,” he said.

The process leaves the building commission with the painstaking task of identifying the new owner and beginning the process all over again.

“I don't know if there's anything we can do to prevent it,” Harmon said. “In some cases, they're transferring property among two or three different people, and they're trying to sell it to make a few dollars off each sale.”

Coon, who's been with the commission for the past three years, is also familiar with the loophole-laden system.

“Bob Johns is one we deal with almost daily, because of the number of LLCs, partners and properties he has. He's a savvy investor and he knows what he's doing.”

While identifying the property owner is a major obstacle for the city's building commission, there's no correspondence between Charleston and Kanawha County in addressing vacant, tax-delinquent properties.

“I've never been approached by the city, and I haven't necessarily done it myself,” Bly said.

In January, the city of Huntington adopted an ordinance to create its own vacant building registry.

But myriad issues that municipal laws can't mediate remain at the forefront.

When Huntington founded a land bank under its urban renewal authority in 2009, it pursued right-of-first-refusal through its Home Rule program.

That right would allow Huntington to purchase liens on tax-delinquent properties before a public auction is held.

The city could then take over the worst properties that would otherwise be sold to people or LLCs that often have no interest in renovating them.

A group of property investors filed a lawsuit against the city, and the Cabell and Wayne county sheriff's departments refused to comply with the Home Rule ordinance.

“A municipality can't tell other government agencies what they will and won't do through Home Rule,” Charleston City Attorney Paul Ellis said.

But it's cities, not counties, that front the cost of maintaining derelict properties.

“State law is too restrictive to enable cities and counties to come together and find solutions,” Ellis said. “We definitely need some amendments to account for what's going on in municipalities to address dilapidated property issues.”

The city of Charleston currently absorbs nearly every expense incurred from derelict properties: cutting the grass; boarding up blighted homes to prevent vagrancy; trash collection; police and fire services and even asbestos removal that's often required prior to demolition.

“The ordinance was put in place to help recover some of those costs,” Coon said.