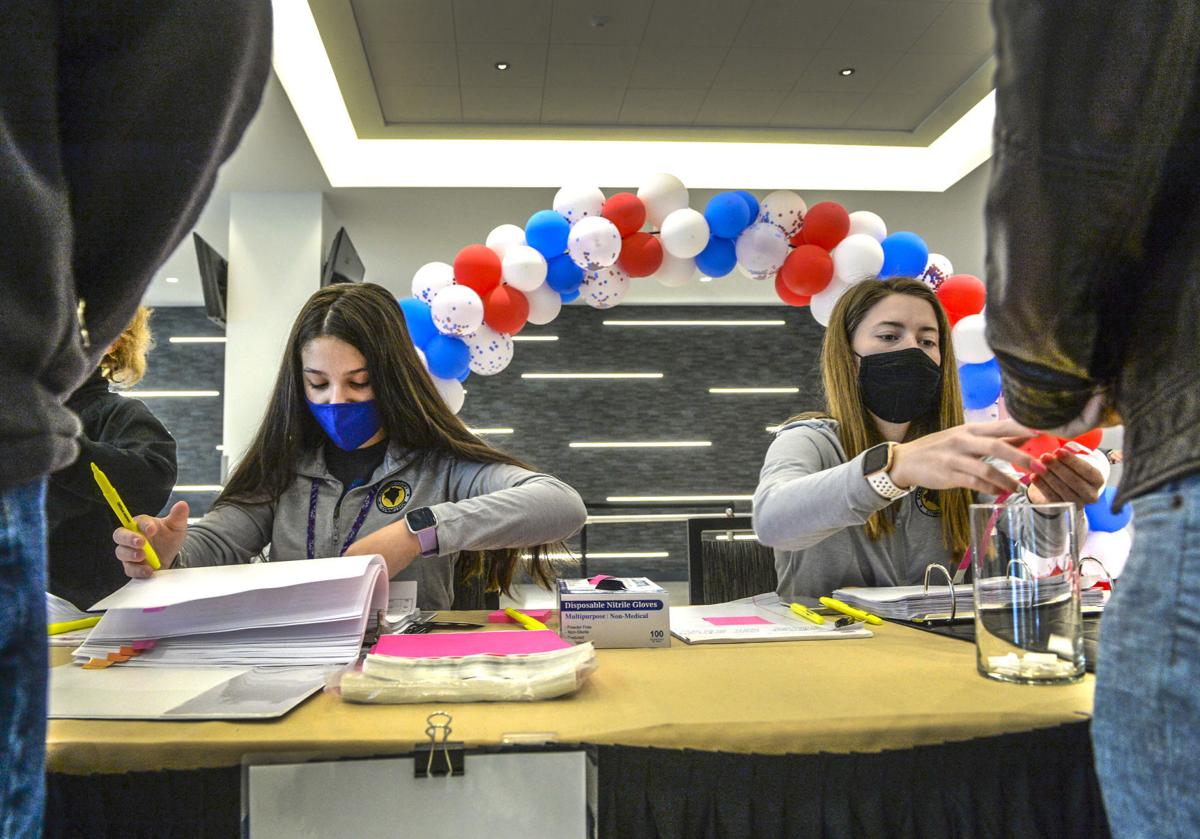 Gabi Breinig (left), 13, and Grace Mason, 16, check in people coming for their COVID-19 vaccines during a recent Saturday clinic at the Charleston Coliseum & Convention Center. 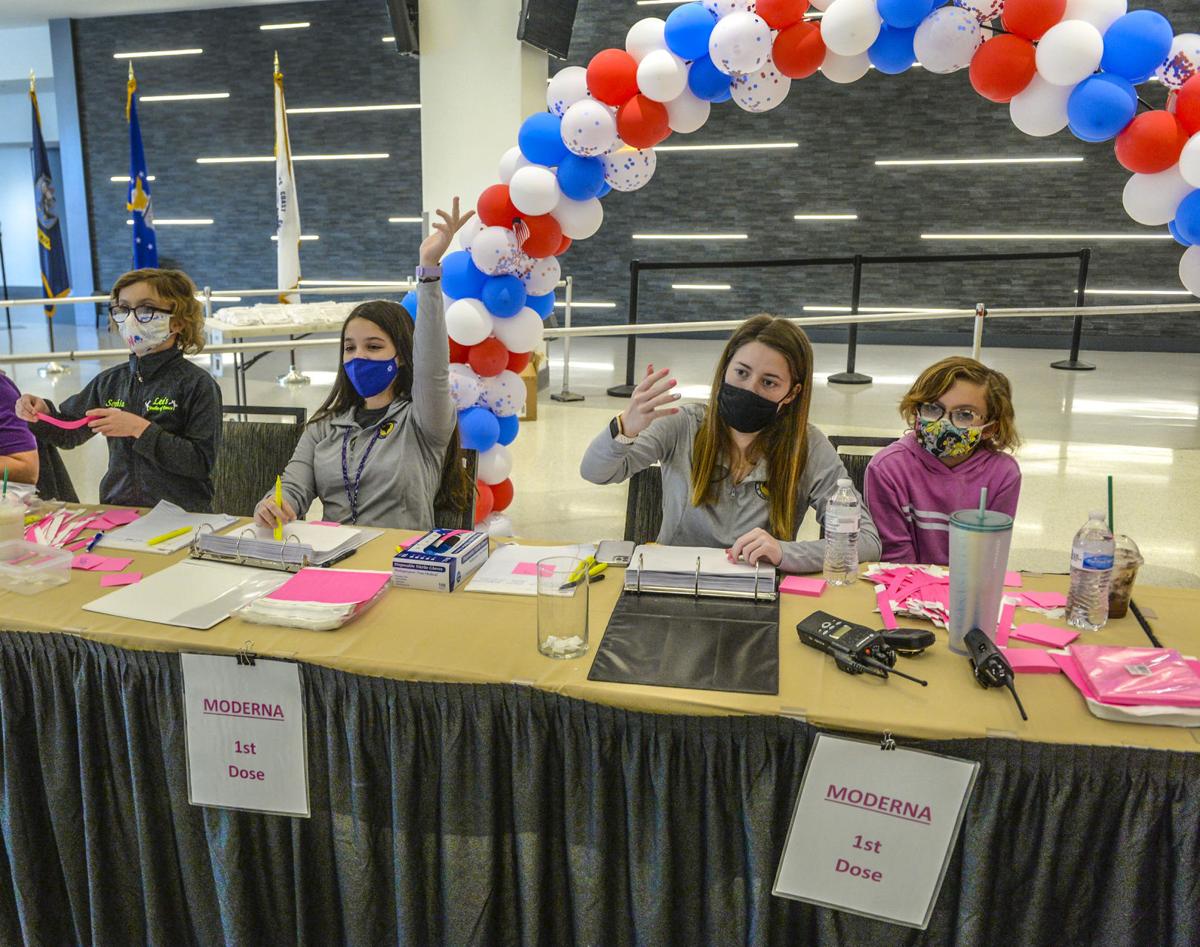 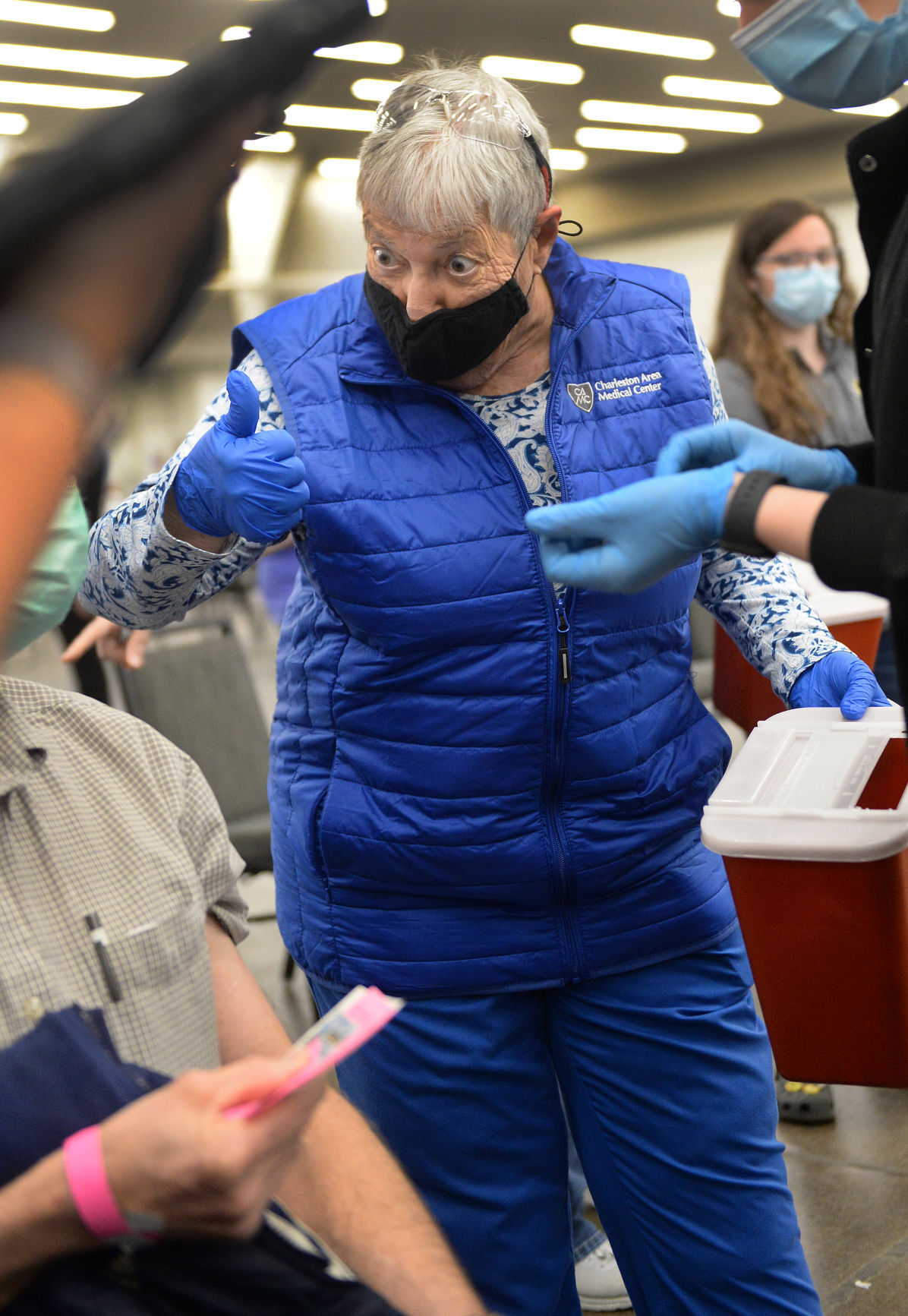 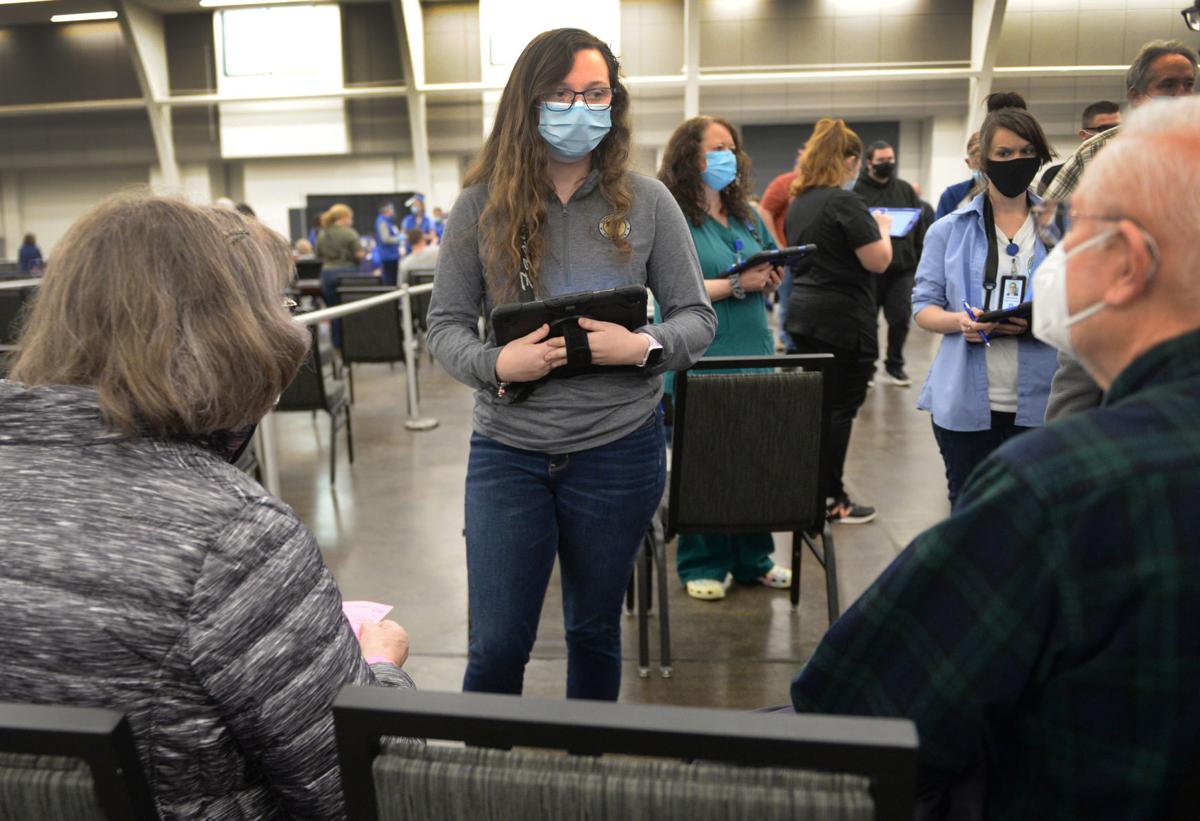 Jordan Gobel, 19, checks in a couple who came to a Saturday vaccine clinic.

Gabi Breinig (left), 13, and Grace Mason, 16, check in people coming for their COVID-19 vaccines during a recent Saturday clinic at the Charleston Coliseum & Convention Center.

Jordan Gobel, 19, checks in a couple who came to a Saturday vaccine clinic.

Charleston-based obstetrician and gynecologist Dara Aliff planned to volunteer bright and early at a large COVID-19 vaccine clinic a few Saturdays ago.

Then the hospital called. Not one but two patients were in labor.

“They were there and would probably be delivering soon,” Aliff said.

Both babies were unusually cooperative, born within an hour of each other.

“I ran in there, delivered one baby, did the paperwork. Then the other mom was ready to start pushing and it was a quick delivery for her,” Aliff said.

Aliff joined her husband, another volunteer doctor, at the Charleston Coliseum & Convention Center, just in time to joke she was only there for lunch. She said she takes the volunteer effort seriously.

“Our [emergency room] docs and pulmonary critical care specialists have been carrying the load of this pandemic, so we felt like this was our way to contribute to our colleagues and hopefully lessen their load. If me spending a day putting some shots in some arms puts less people in beds for them, I feel like it’s the least I can do.”

At the coliseum, Aliff joins as many as 240 volunteers on hand for each clinic. They range in age from 13 to mid-80s, not including a pair of 8-year-old twins who came with their working mom and ended up greeting and guiding patients.

Since Jan. 2, the Kanawha-Charleston Health Department has administered roughly 50,000 COVID-19 vaccines at the health department and small clinics, as well as through large-scale operations like those held Saturdays at the coliseum, where staff see 4,000 patients or more and rely heavily on volunteers.

“They are the backbone of what we’re doing here,” said Dr. Sherri Young, the health department’s executive director.

“Not only do they do registration and patient transport, they’re the first faces that you see. They get you from the door and they get you back out to your car. They help you do that process safely.”

“We backfill with volunteers to come in and help with ushering people to the vaccination pods, greeting, helping keep the line moving, help showing people where they need to go, because the civic center is a big place to navigate,” said Julie Blackwood, the health department’s volunteer and hospitality coordinator.

Without the volunteers, she said, “We’d be stretched pretty thin. The process would go much more slowly.”

At the upper end of the spectrum of volunteers is Diana Durst, who turned 83 on Saturday. After the pandemic forced her to cancel her annual winter trek to Florida, the endless days of puzzles and reading were driving her “bonkers,” she said.

A retired nurse with an up-to-date license, she decided to offer her services.

“I’m giving injections,” she explained between shots at a recent clinic.

Mind you, though she worked part-time until last year, she graduated in 1958 and hasn’t worked full-time since 1997.

“Now hold still,” she said to a patient, moving the syringe full of protective serum smoothly into place.

The skilled practice of more than a half-century took over. The patient didn’t flinch. Durst grinned.

“You’re all done,” she told him, offering a thumbs-up.

Some 24 years after retiring, Durst is finding her purpose again.

“I think that we all need to give in order for all of us survive. And if that meant volunteering ...” She shrugged. “They couldn’t run this clinic without the volunteers.”

Volunteer days start at 7 a.m. and go as late as 7 p.m., longer than that at least once in January, when organizers realized at day’s end there were left over vaccines that wouldn’t last.

Health officials told the volunteers to go home and rest.

“Nobody would go home,” said Young. “We filled the coliseum back up again at the time we were supposed to be done because we had 400 vaccines that would have gone bad if we hadn’t done it. ... They wouldn’t go. And so we saw 13-year-olds, 14-year, 15-year-olds, picking up iPads, going in the pods, helping us with vaccinations. So everybody’s in this effort to get vaccines in arms, make sure we don’t waste a dose. And that was tremendous to watch.”

Among the youngest volunteers: Young’s daughter.

“Seeing and helping people get out of COVID times is a great way to get back into normal,” said Gabi Breinig, 13. She said it was her choice to volunteer. It gives her something tangible to do during the pandemic and she’s found an unexpected connection to the older people she’s helping — one in particular.

“She was in a wheelchair and it was pretty slow moving,” Breinig said. “So I volunteered to push her around and she was really nice. She was super excited to get the shot. ... I guess she’s just like any of us. She wanted to get past COVID by getting the shot herself and helping the community around her not get infected.”

Jordan Goble, 19, has been staffing the Saturday clinics since they started four months ago. A Kanawha County Commission intern, Goble is studying criminal justice and hopes to be a deputy sheriff some day.

“Some of the elderly, you know, grandparents, they’re very relieved they can go and see their grandchildren,” Goble said. “Seeing the relief on their faces makes all the long hours and everything worth it.”

Marshall University sophomore Raegan Good, 18, said the pandemic has given her generation an opportunity to shine.

“It’s, like, a time for people my age to really stand up and have an impact on the community around them. It was a good way to turn something like this into a positive,” she said.

Volunteers said the pandemic has given people from all walks something in common, a shared angst and a unifying sense of joy at moving together a few steps closer to life as it used to be.

“Even if we disagree on the route to do it, I just want life back to normal like everybody else does, and if this helps us get there and if this makes us a healthier community, OK,” Aliff said.

“Anybody who volunteers at anything, you get as much out of it as you’re giving to it, to see the faces of the people who are getting the shots and how many of them are just in tears as they receive their vaccines. They’re just so happy, hoping that this is life preparing to move on.”

Organizers ask that volunteers be at least 15. Those who are interested may register online at West Virginia Ready, https://wvredi.org/.